In an effort to lose weight I've been trying to exercise on a daily basis and eat better. I've been reading other people's success stories and doing some research on my own. I recently started the C25K and was really enjoying it until I did something to my knee. Well, I don't think I did anything, but my knee seems to be a little weak so I'm having to take a break from running. I'm going to be doing some physical therapy to try and strengthen the muscles around my knee. It's frustrating because right now I cant exercise at all, but I'm a big fan of physical therapy so hopefully I'll be back at it in a few weeks.

Just because I'm not able to exercise much right now I'm still trying to eat better. I've been counting calories and trying new foods in a effort to find some good-for-you foods that I like. One of the blogs that I've been reading for motivation is Mama Laughlin. I really appreciate her constant struggle and realness. After reading her blog and looking at her 'Products I Love' tab, I decided to try a few of the foods that she enjoys.

First off, think thin protein bars. I've never been a huge fan of protein bars, but since these are available at Kroger's individually and only $1.69 a piece, I decided to pick up a couple and see what I thought. 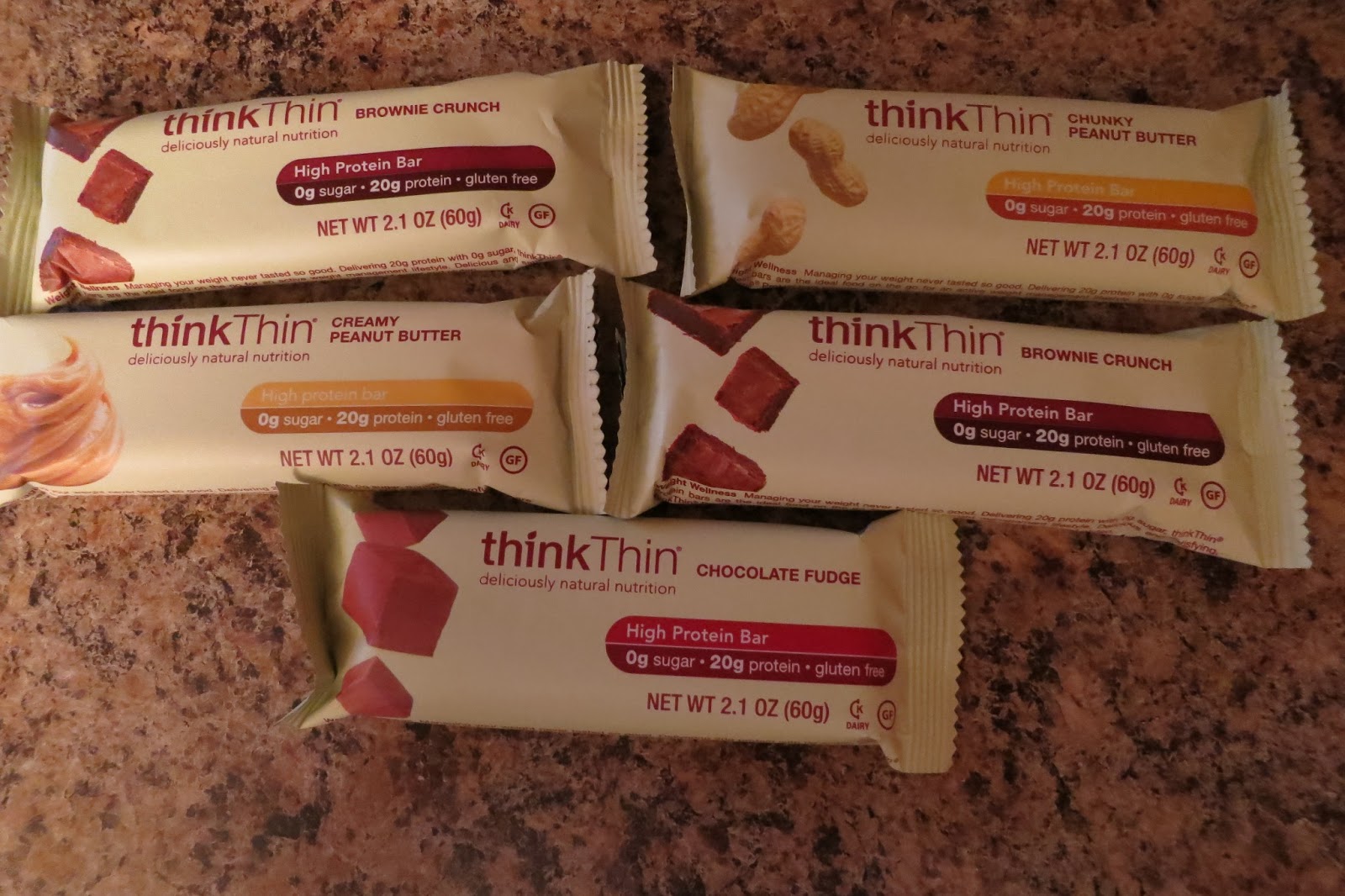 I LOVE THEM! To be fair, I've only actually had the creamy peanut butter and the chocolate fudge, but I will be trying all of the them soon. Each bar has between 230-240 calories and 20 grams of protein and NO SUGAR, but you wouldn't know it. Sugar is a serious addiction for me so I'm really trying to limit it. The first morning I ate one, I was starving. I had gotten up extra early, been to a doctors appointment and was about to go into a long conference call. I figured I would eat one really quickly and hopefully it would do the trick. I was amazed at how full and satisfied I felt. The only downside I have found is that they are really rich. So have a big glass of water to drink while you eat one.

My next new find of the week is... 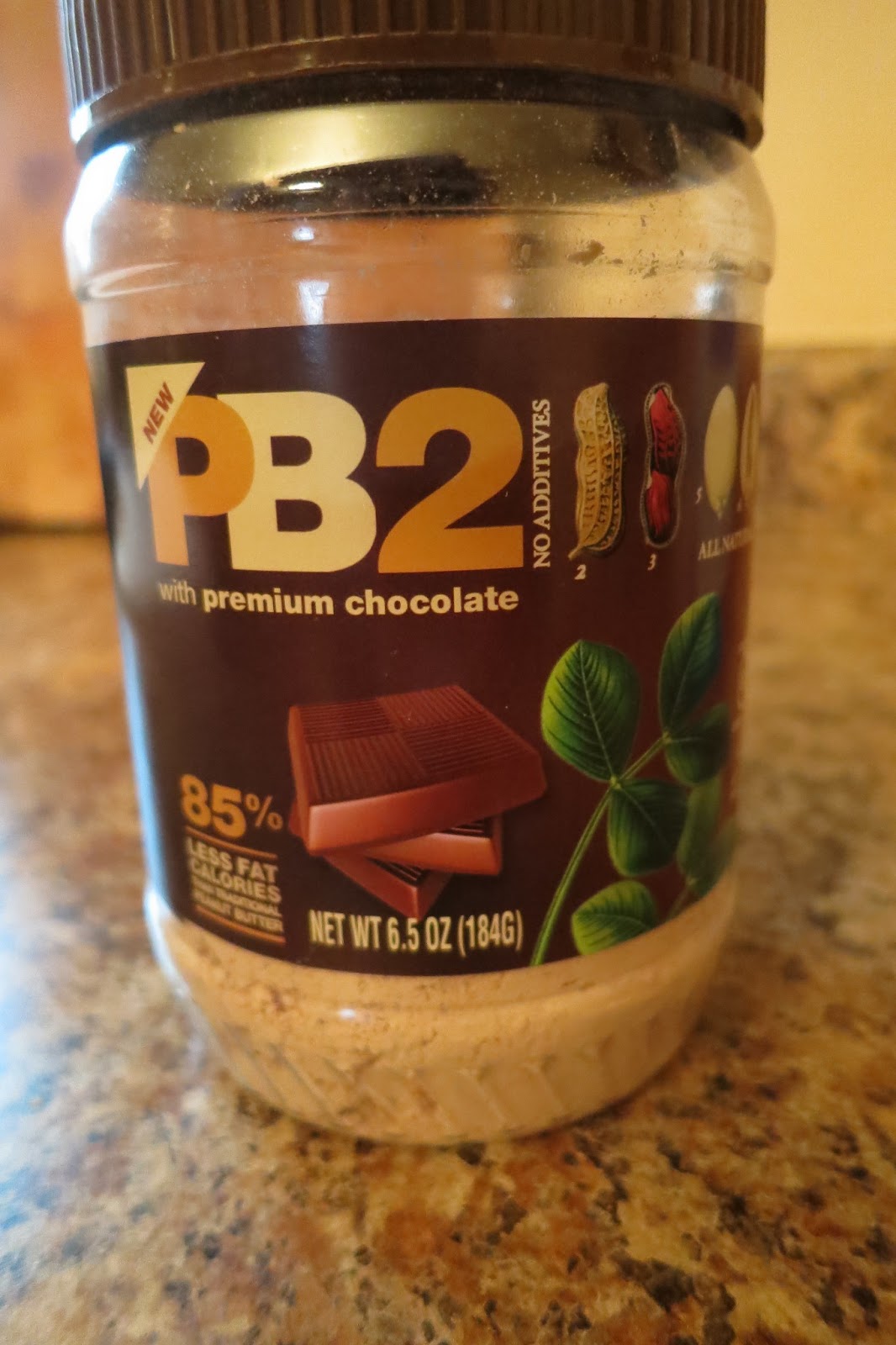 PB2 is simply powdered peanut butter. It comes in two flavors regular and chocolate. I bought the chocolate (see previous sugar addiction comment). It is in powder form because they have taken out all the oils and fat, turning it into a powder form. In that process it loses most of it's fat. See picture below of the comparison between the two peanut butters. (Click the picture to make it bigger) 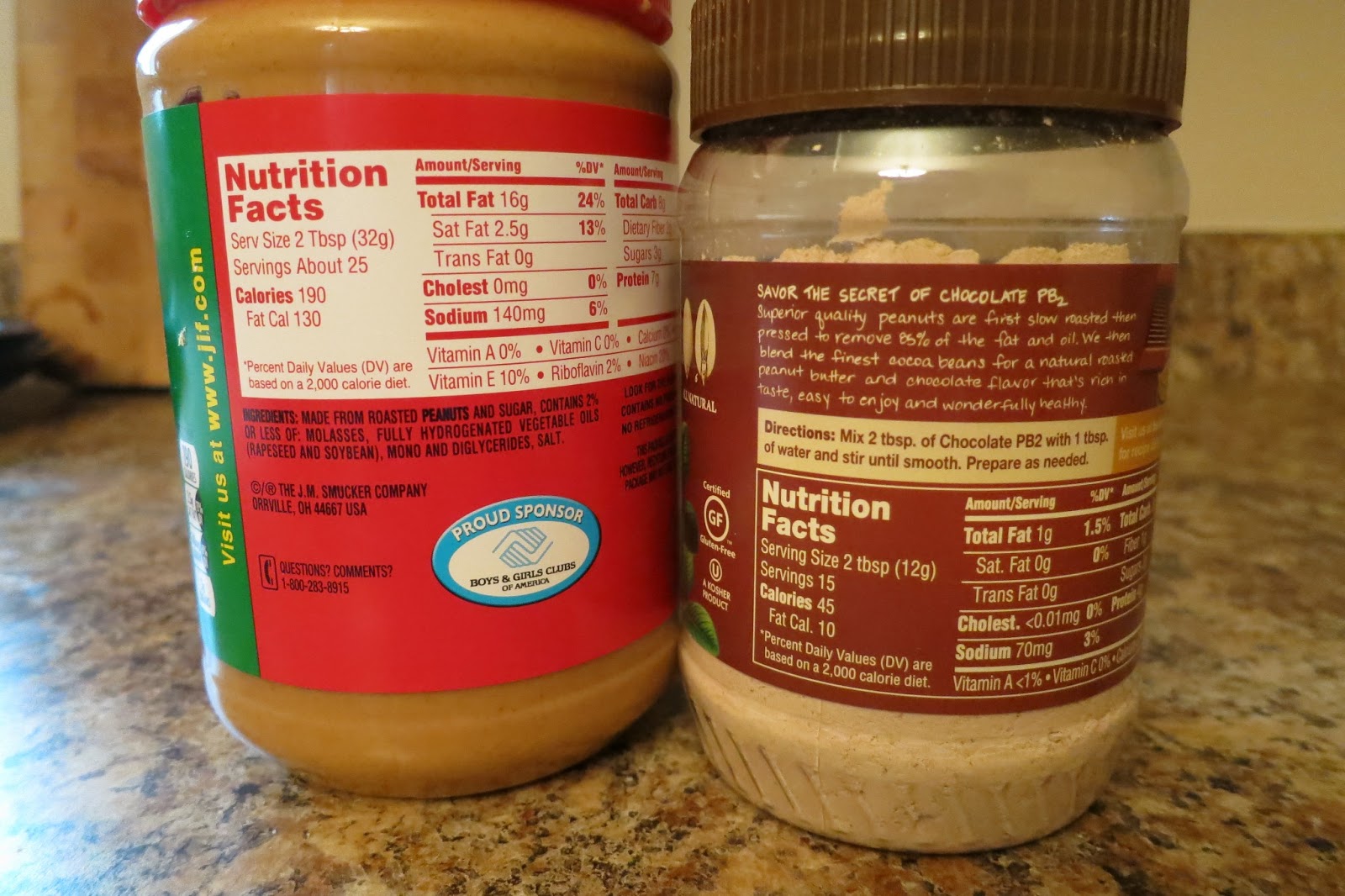 It says you take two tablespoons of PB2 and mix it with one tablespoon of water to achieve regular peanut butter. It doesn't taste exactly like the JIF pictured beside it, but I also bought the chocolate form and so the chocolate taste definitely comes through. I was a little skeptical, but their website (here) as a ton of recipes you can use the PB2 in and from scouring the internet I was most interested in making a smoothie with it. While I haven't had time this week to make a full smoothie with it, I have paired it with this other new find to make an AMAZING shake. 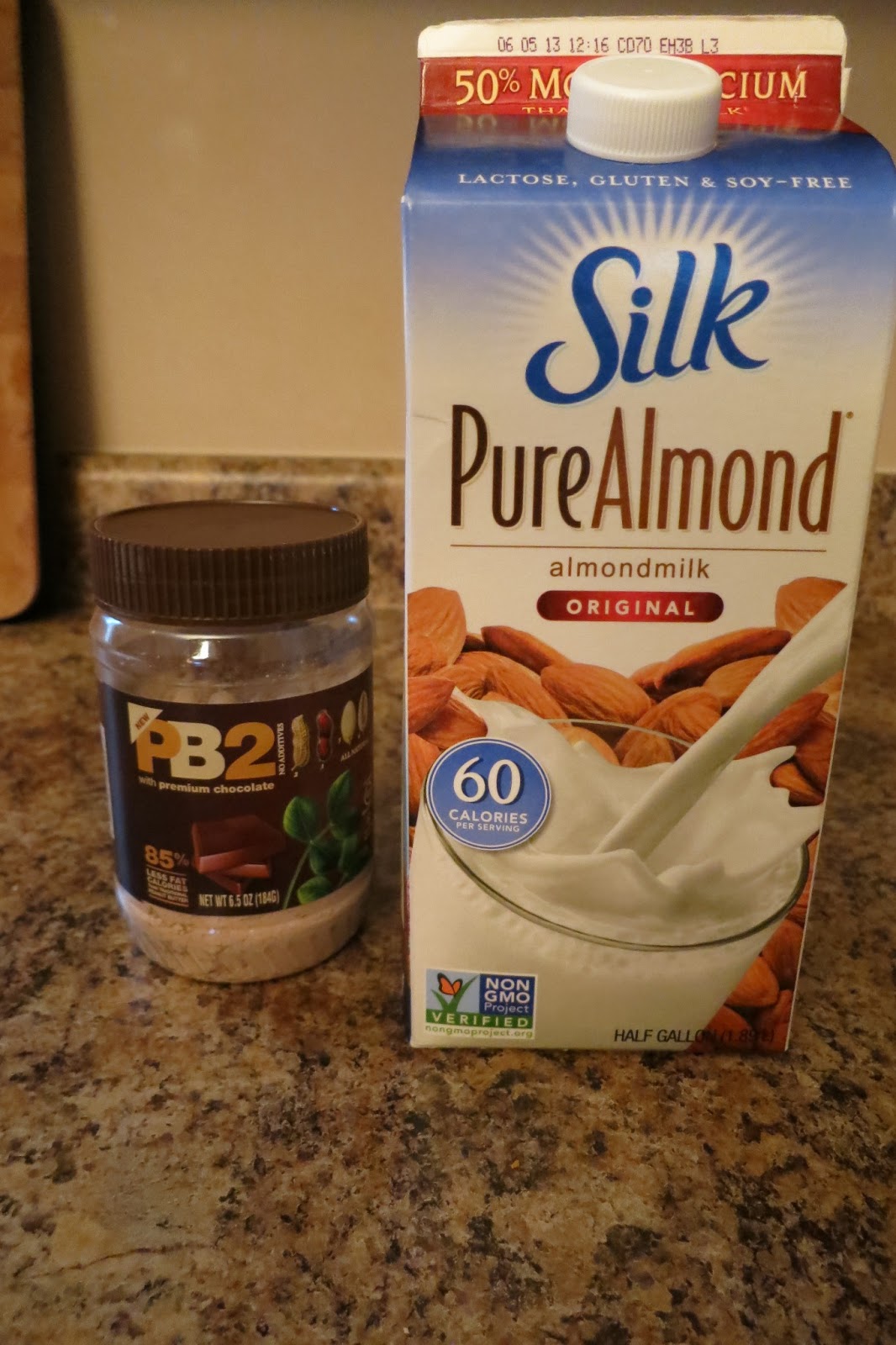 Almond milk is nothing new, not even to me. My Mom has been drinking it since before it was cool, but I've never given it a try. I've never drank a ton of milk myself and when I did it was always skim so I never felt the need to try Almond milk, but all the recipes I found online said Almond milk so I figured I would give it a shot. Since I was short on time, I just mixed one cup of almond milk and 2 tablespoons of PB2 in a Blender bottle and shook it all up. It was wonderful. The bottom of the shake had a little PB2 that didn't mix up, but it took all of 5 seconds to make and was only 105 calories. It honestly tasted like a creamy peanut butter milkshake. If anything the PB2 is worth buying it just to use it in this way as I believe it would completely curb a sweet tooth craving. I am however looking forward to using it in many other ways and trying the recipes from PB2's website as well as substituting it in recipes like THIS that I have found on pinterest. PB2 is found at some Krogers, but you can also buy it online, at Whole Foods or Rainbow Blossom.

Lastly, I've tried a new type of hummus. I've always liked hummus and been meaning to make it on my own. I have a great recipe that I will share when I finally make it, but I've never "kept it on hand". Well all that has changed since I tried this variety... 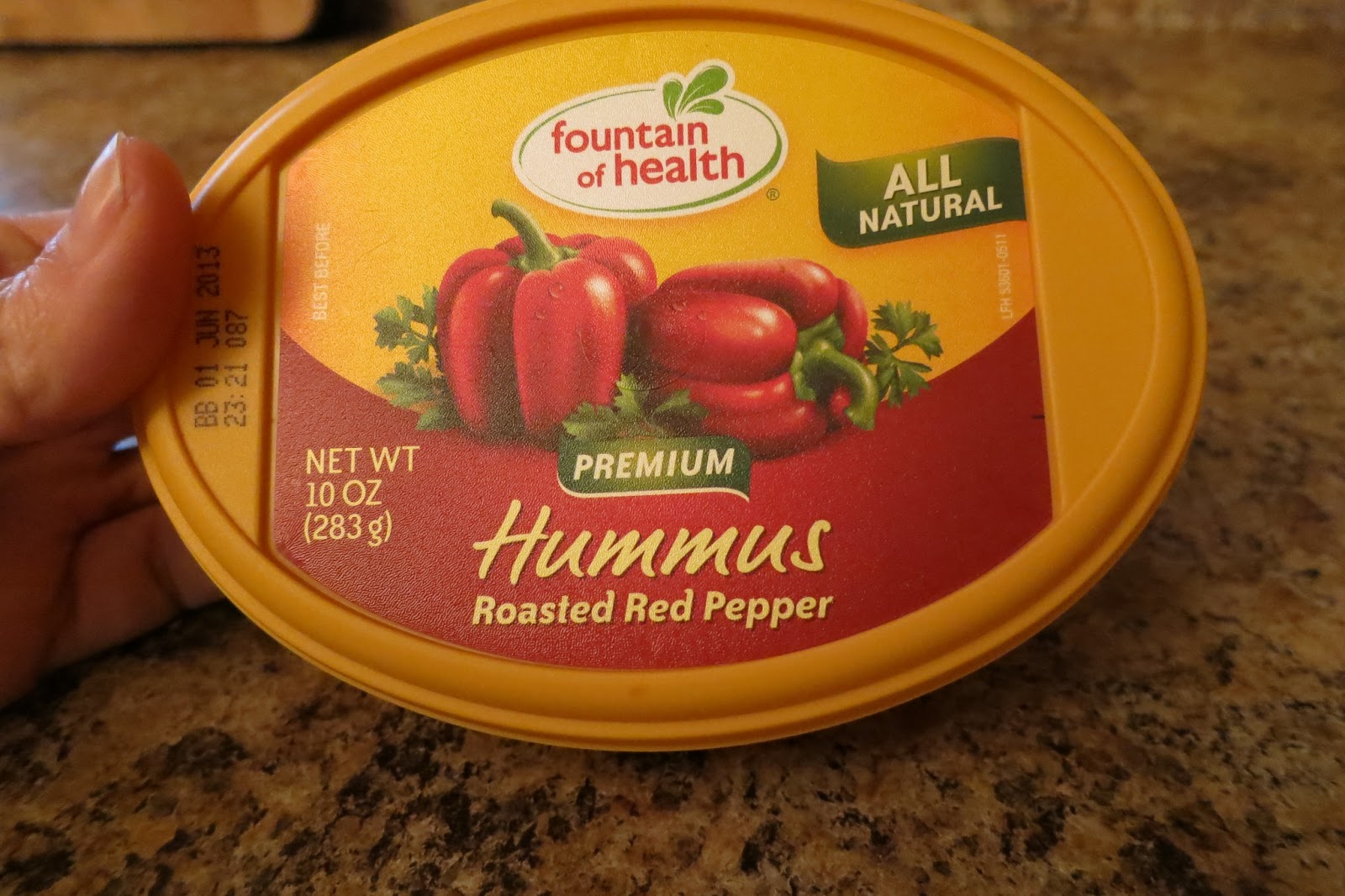 The Roasted Red Pepper is AMAZING! I swear it taste just like a pepper cheese spread. Yesterday, I had  it for lunch on baby carrots and a serving of wheat thins. Then I had some again on a slice of bread for a snack and again at night as a late snack. Yeah, it's that delicious and I'm really hooked. 50 calories for two tablespoons so although I had 8 tablespoons yesterday it was only 200 calories. Not too bad! I love cooked vegetables  but have always struggled with eating them raw. It seems like dousing them in ranch or other dipping sauces defeated the purpose, but this hummus has changed that. It will go great on everything and will probably be a substitute for me for butter and cream cheese on breads. It's available at Kroger in the case with the "fancy cheeses".

So those are my four new favorite items of the week. I hope you given them a try. I promise you won't be disappointed. In other news, it's my favorite person's 30TH!!!! birthday on Sunday!! I can't believe I'm going to be married to an old man. For his birthday we are renting a cabin at Red River Gorge and spending the weekend hiking with friends. We've never been to the gorge, but we love to be outdoors and hiking and there is supposed to be a meteor shower this weekend. My husband is an avid photographer and so this meteor shower is an unexpected extra birthday gift. It's going be a great time with two other favorite couple friends. Just wish my knee luck! Since we have a cabin we plan to stop at the grocery on the way down to get foods to breakfast and grilling. I decided to take few things from home that I thought we would use... 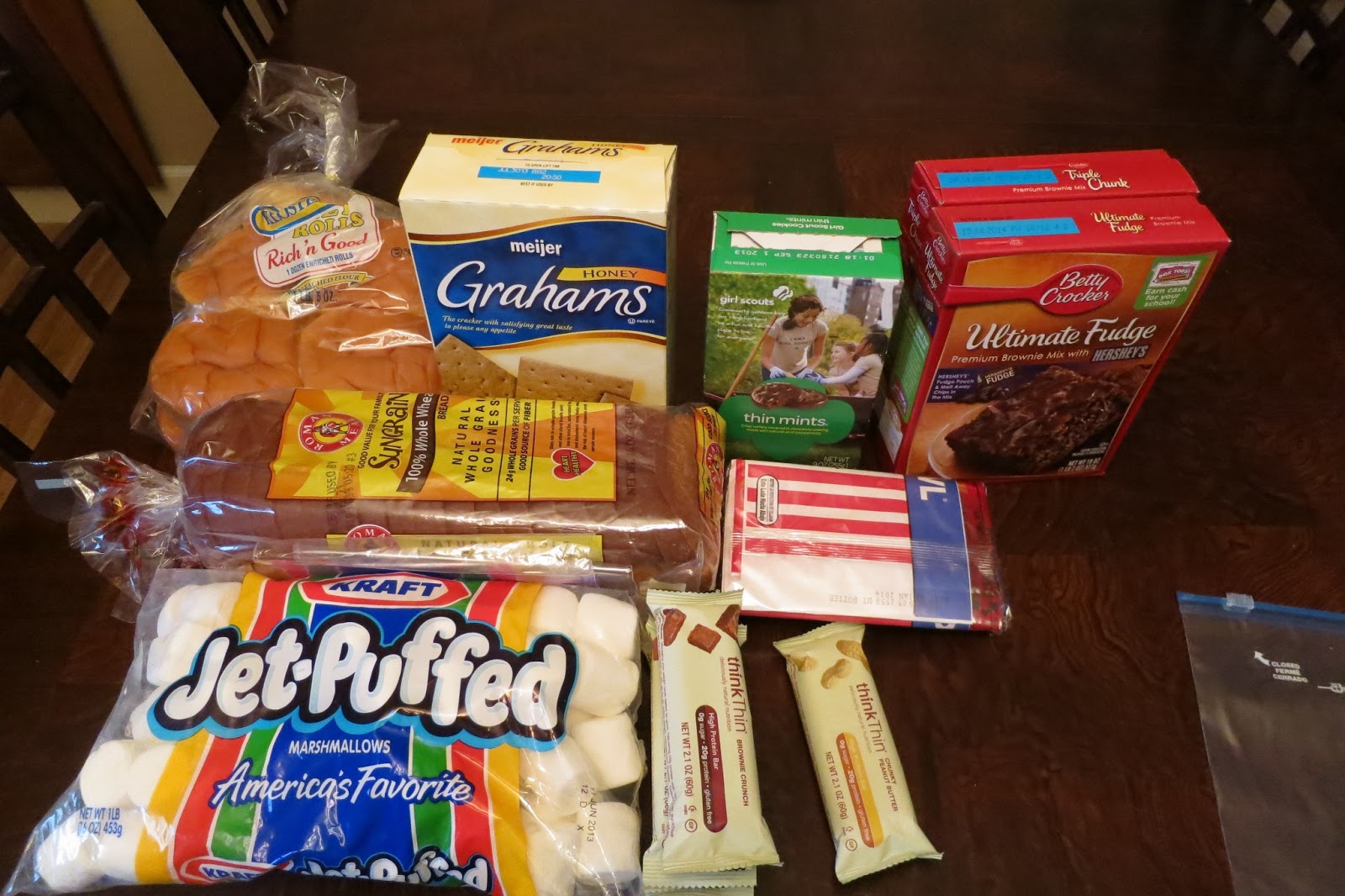 Now I realize my knee AND my diet need luck for this weekend! In my defense, the brownies will be Adam's birthday cake and the girl scout cookies I'm just trying to get out of the house. The marshmallows and Graham Crackers are because my dear friend has never had smores!! How is that even possible?? I'm hoping to stay on track and continue to count calories despite how badly this packing list is already looking, Hopefully the 6 mile hike on Saturday will even out any indulging that happens to take place.

Have a great weekend!