I’m Too Old For This

This weekend kicked my butt. It was fun, just like every other weekend, but I can honestly say that it made me realize something…I’m getting old. For real.

Friday, Landon and I spent the morning at a playground near our house. I thought he would love it, but I think it was actually a little too big for him and he was overwhelmed. We played for about 2 hours, but he wasn’t crazy over it and I had to play with him sometimes to keep him going. 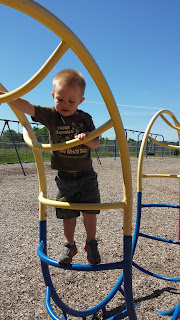 After lunch and a nap we headed to Noni’s house to play in the pool. Adam got off work and joined us. I stopped at a Walgreen's on the way and loaded up on some much needed pool supplies: swimmies, new sunglasses, new pool ball and swim diapers. 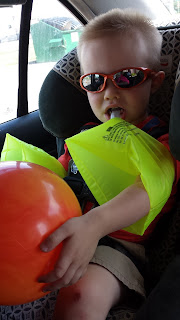 He was so excited to go to the pool and I can officially say he absolutely LOVES it this year. After a little convincing he finally got the hang of the swimmies and was fine when we let go of him to let him swim around on his own. His big problem now is that he gets excited easily and opens his mouth really big which makes him drink a bunch of water. I guess a little chlorine never hurt anyone, but then he starts coughing and we have to pick him up for a minute. Hopefully he will get the hang of it soon. We practiced blowing bubbles in the water, kicking, swimming, floating, and going under. Having given kids swim lessons when I was a lifeguard, I know kids love the water and love to learn to swim and play in the pool. From what I saw, fear comes from the parents either not reassuring them or making them scared of the water. The more we encouraged Landon to do in the pool, the more he relaxed and wanted to do things. He must have jumped off the diving board 20 times. 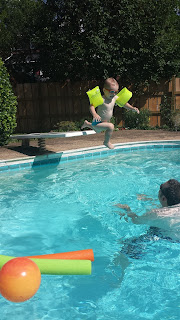 Every time, he would come up, get the water out of his eyes, and say “try again”. He even got to the point where we didn’t try to catch him and just let him come up on his own. I’d like to get him a pair of goggles so the water doesn’t bother his eyes, but I’m not sure he would keep them on. 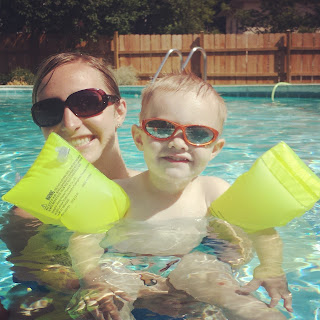 After some pool time we took Landon to my Mom’s house. It was an adult weekend and so Landon stayed with my Mom most of the weekend. After we dropped him off, we went to dinner and then to the drive-in for a double feature. I LOVE the drive-in. We went for the first time last Summer and I had no idea what I was missing. It’s a great date night!!! Since we have a station wagon we fold down the back seats and set up a bed in the back. It’s so comfortable and the best way to see a movie. 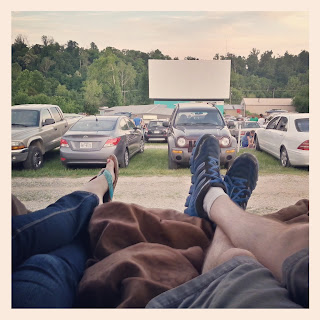 We saw Man of Steel and The Great Gatsby. I enjoyed both of them although neither are going to go down as my favorite movie. Since the drive-in is outside and can only be seen in the dark, the first movie didn’t start until almost 10pm. Needless to say, we were getting into bed right at 4am. That used to be normal for us, but now we never stay up that late anymore. It's really been years since I have. I was just glad Landon wasn’t home to wake us up at 8am. We got to sleep in past 11am. Woohoo!

Saturday, once we were finally up and moving, we worked a bit around the house. I helped my Dad organize another section of his garage. He is almost done and it looks great. I’m just hoping he keeps it up. He has tendencies to be messy, but I know how good it feels for him to get organized and hopefully that will motivate him to keep it up.

That night we met up with some friends for their birthday. We went to dinner and then to O’Sheas for drinks. This is probably the third time I’ve been to a bar… in my whole life. I’m not, and never was, a frequenter of bars. Thank god! My girlfriend and I split a bottle of wine and enjoyed a few drinks. 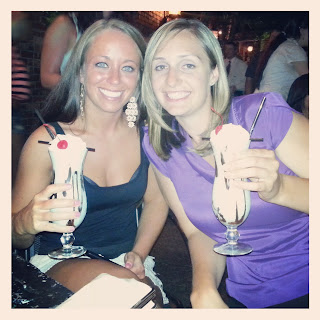 It was nice to sit out and the patio and talk, but we overstayed our welcome. We should have left around 11:30pm, because that is when the teenagers started showing up. I kid you not, most of these kids looked 14 years old. They were carding at the door, but I honestly do not believe half of these kids were 21 years old. However old these kids were, they were idiots. They were are sloppy drunk, being obnoxious and doing anything they could for attention. I may not have always made the best decisions, but thank god I never went through that stage. We left at 1am and although I enjoyed the atmosphere of O’Sheas and the company, I will be sure to only go back for dinner and drinks before 11pm.

Since it was well past 2am when I finally went to bed, I ended up calling in on Sunday. There was no way I was getting up at 5:45 when my alarm went off. It was worth being able to sleep in and once we were up and seriously dragging (two nights in a row was too much) I got myself together went to the grocery and picked up Landon. This year’s Father Day was pretty relaxed, probably because both Adam and I were just beat from the two previous nights. I made a nice big dinner and we had my Dad and Step-mom over. We didn’t do anything special or really much of anything at all. I only took one picture all day long of Adam holding Landon when he first woke up from his nap. 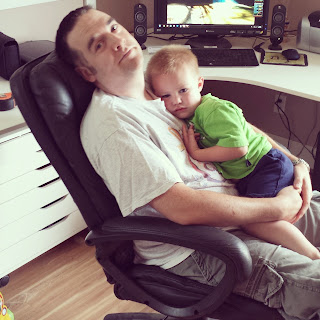 Even though we didn’t do anything big, I hope my Dad and Adam always know what wonderful Fathers they are. I wouldn’t trade either of them for the world. I know the guidance and influence my Father had on me growing up made me a lot of the person that I am today. I see Adam being an amazing parent to Landon and I look forward to seeing them working on science projects and cars together in the future. He has already taught him so much in his two little years that I smile just thinking about their future together. There is nothing in this world that makes me happier than seeing Adam and Landon together. I just hope that Landon can be half the man his father is, because if he is, he will be a great man, husband, and father of his own.
Posted by Unknown at 6:35 PM