Adam was out of town on business last week. I miss him terribly when he is gone, but I have to admit I sleep much better when I get the whole bed to myself. When he is gone, I actually lock the doors at night and Kaiser stays on high alert. He knows if it’s dark and Adam isn’t home that it is his duty to protect his family. I’m not kidding. I love it, but it’s also annoying, because he is constantly acting like he hears something outside and doing that quiet dog growl. It starts to freak me out and I think maybe someone is outside, but truth be told I have 100% confidence that if anyone tried to hurt me or Landon, Kaiser would die trying to stop them. I can’t imagine life without a GSD. They are so amazing.

Enough gushing about the dog, Friday night, when Adam was on a plane coming home, I attended a Starry Night event at Huber’s. Normally I would go with my Dad, but he was in Washington D.C and this event was for members AND their guest so we made it a friend’s night instead. It’s been awhile since Mary and I have had a girls day there so she was super excited and she finally got try their blackberry sangria I’ve been raving about. 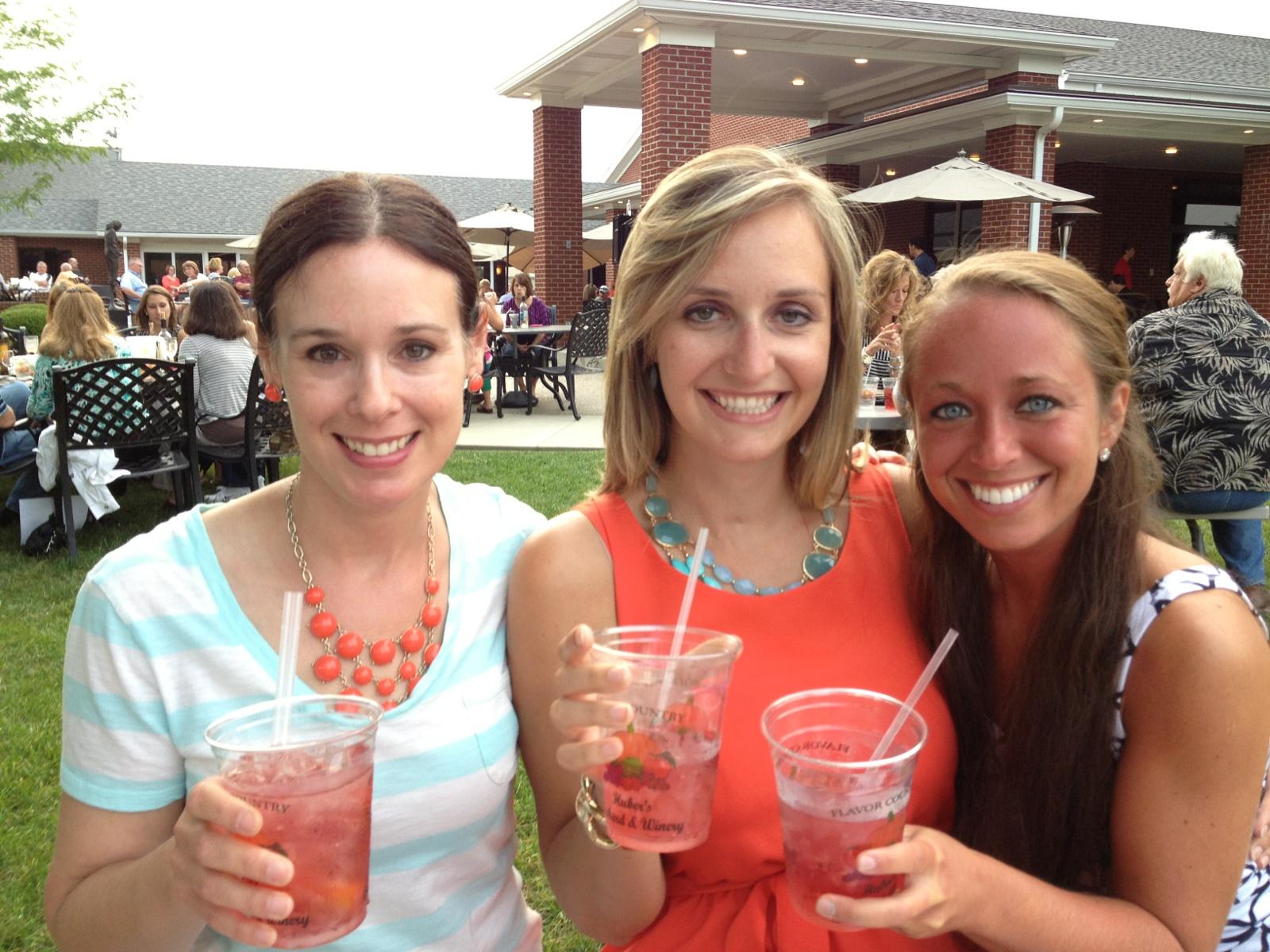 My big brother also got us a bottle of my most favorite wine ever, Autumn Frost! Delicious!! It was a great night to hang out, have some BBQ, and drink some sangria. I think the strawberry (out of season now) is still my favorite, but I do really like the blackberry. We also tried their peach which was wonderful as well. We had a great time and the weather was amazing! 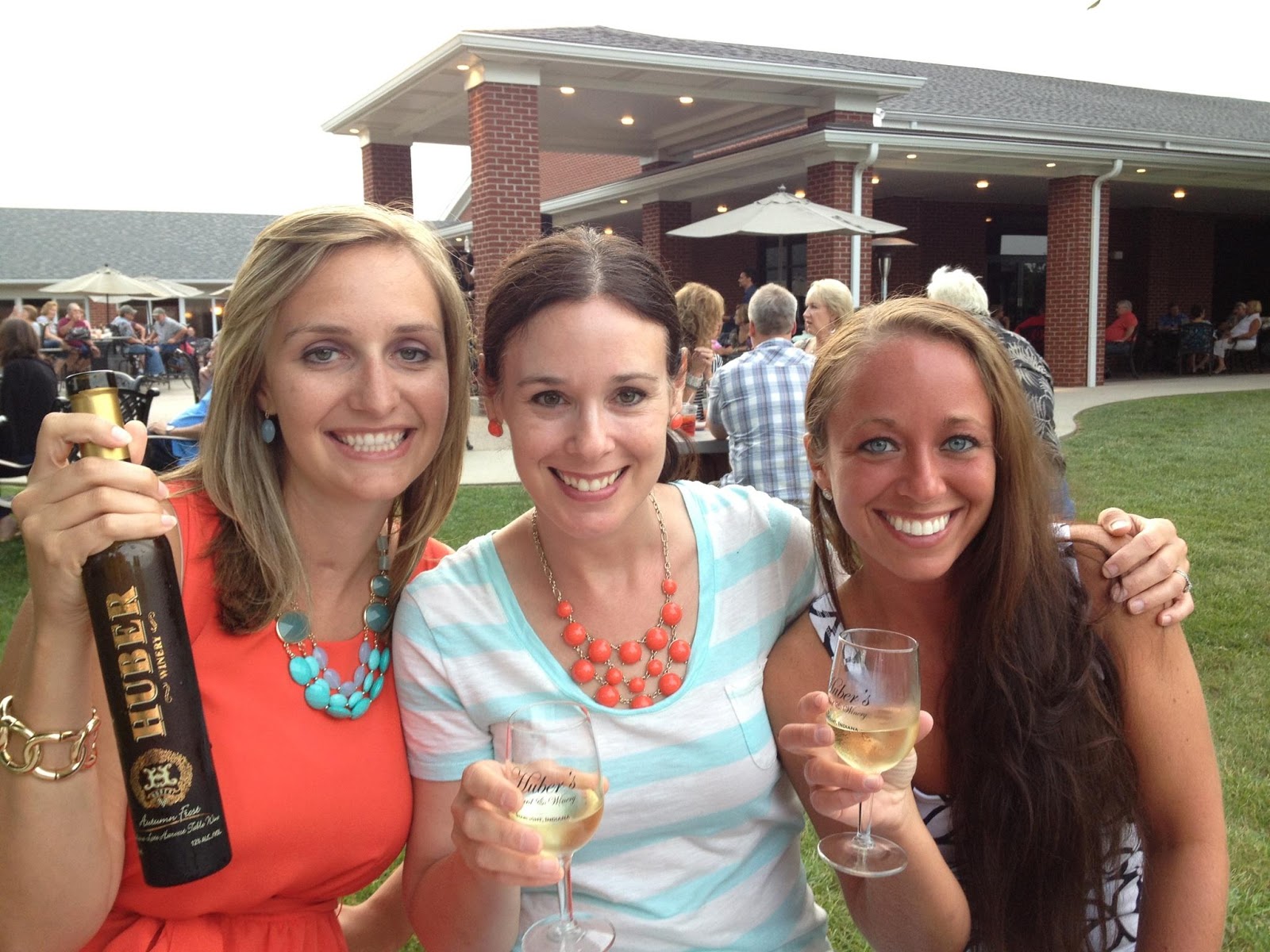 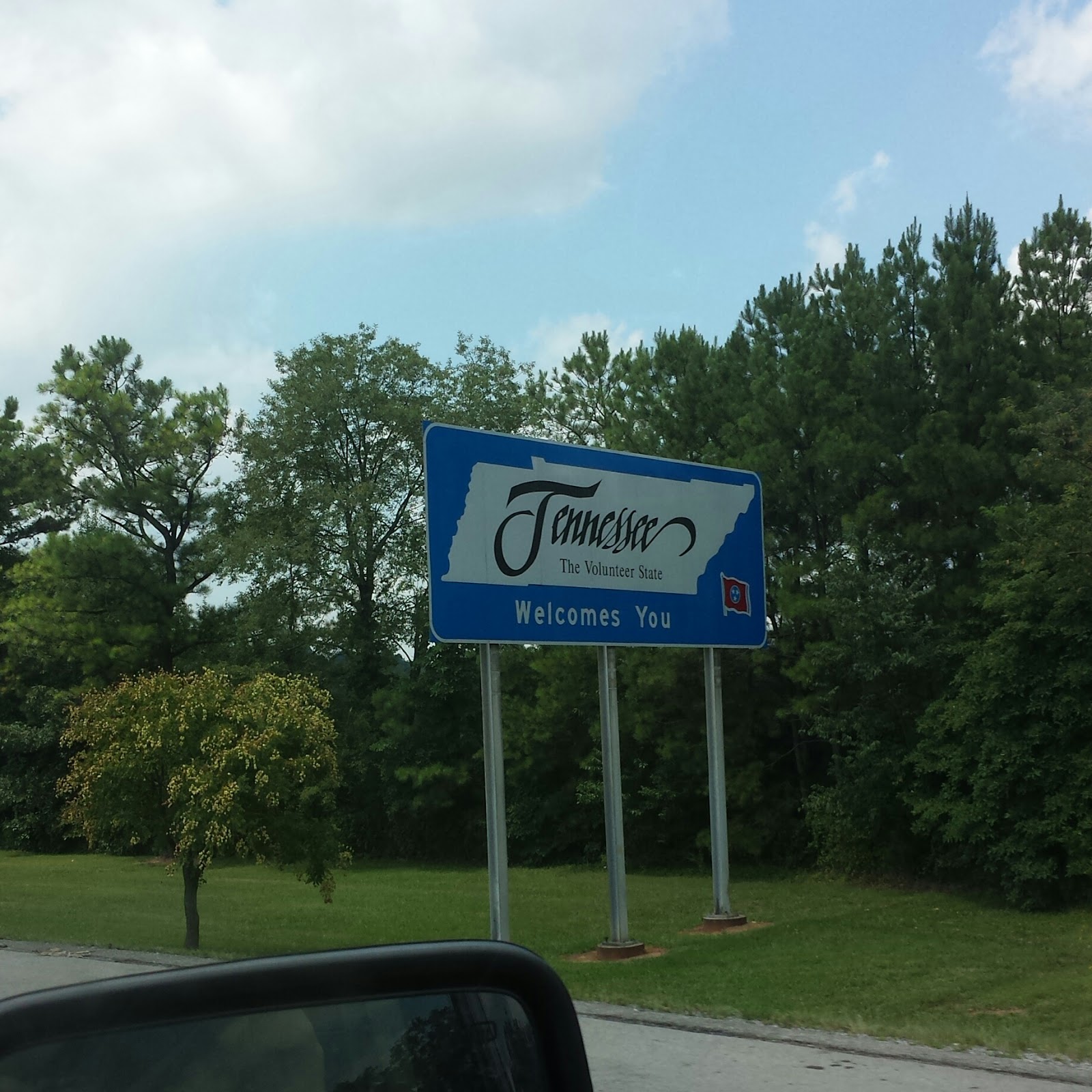 We headed to this city… 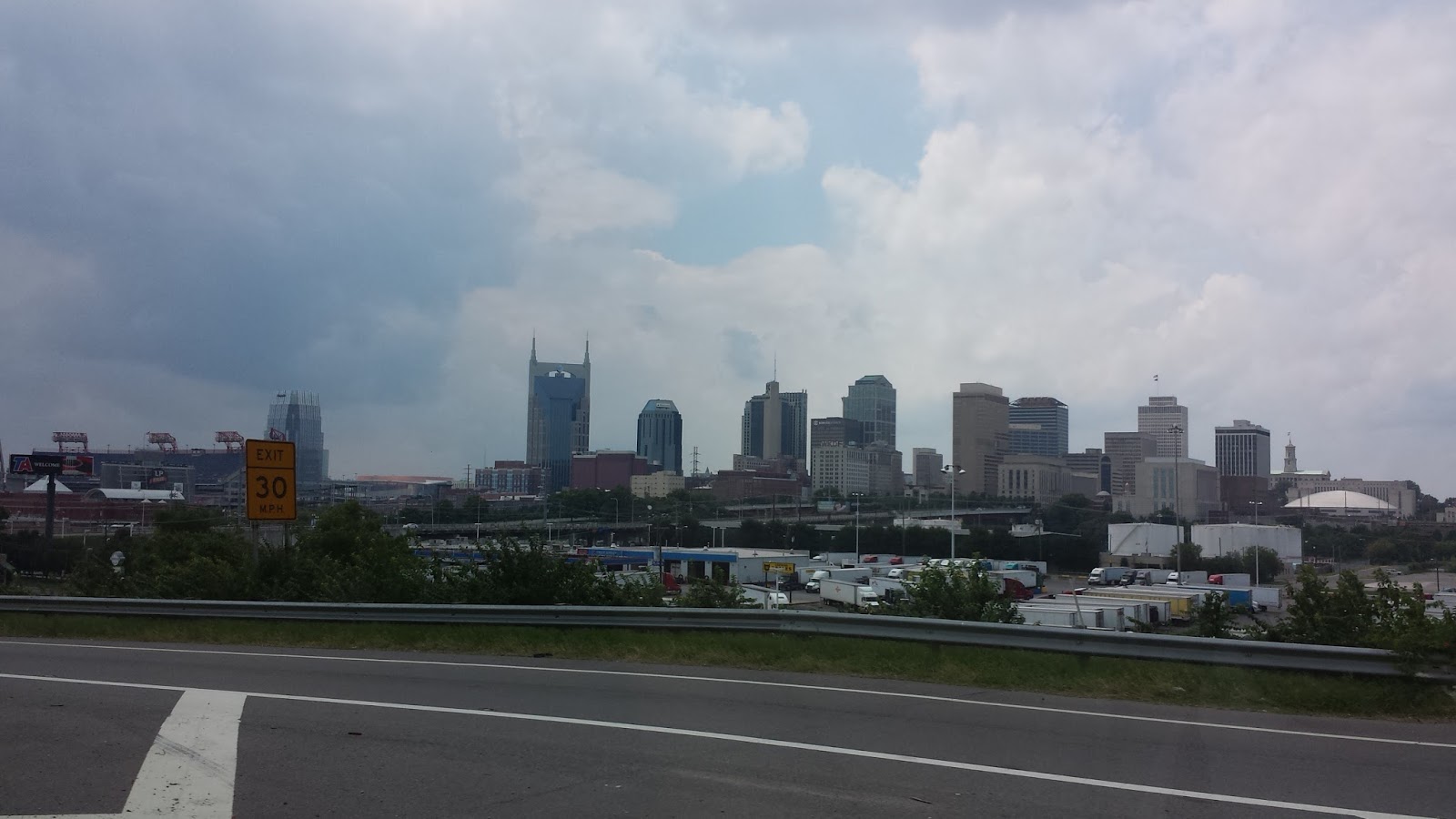 To have a look around and explore the area. There is an area just south of Nashville called Brentwood that we wanted to go visit, check out and get acquainted with, because Adam just accepted a position there!!!!!!!!!!!!! Not only that, but he starts August 19th!!

Which means... we are moving to Nashville, Tennessee!

It’s exciting, scary, overwhelming, surreal, you name it. We’ve known for a long time that we would eventually be moving. Louisville doesn’t offer the opportunities for Adam that bigger cities do. For us to stay in Louisville and Adam work for a larger CPA firm, he would be traveling constantly. The firm he got a position with is the largest financial auditing firm in the country and won’t require him to travel outside of the area as often. It’s an amazing offer and great opportunity for him. Not only that, but it puts him on the path that he wants to be on and sets us up to meet our long term goals. It’s also a new opportunity for me. I have no choice, but to leave my current job and finding something new. I’m looking forward to the opportunity to find a job that I enjoy. I would love to do travel and tourism and/or event planning so right now I am focusing on jobs in those areas. Most importantly though, I want to get down there and be together as a family as soon as possible so I’m willing to go just about anywhere to at least get myself down there. If I’m throwing away almost 10 years of work and the security that comes along with that, I might as well make it worthwhile. I’ve applied for a number of things so we will see what happens. I’m just hoping to get something soon.

We spent the day driving around Brentwood and the surrounding areas looking for places to live. Landon did AMAZING despite being in the car for almost 12 hours. He is such a good little boy. When we got toBrentwood we checked out Adam’s office then headed to a Chik-Fil-A so Landon could get out some energy at their playplace. 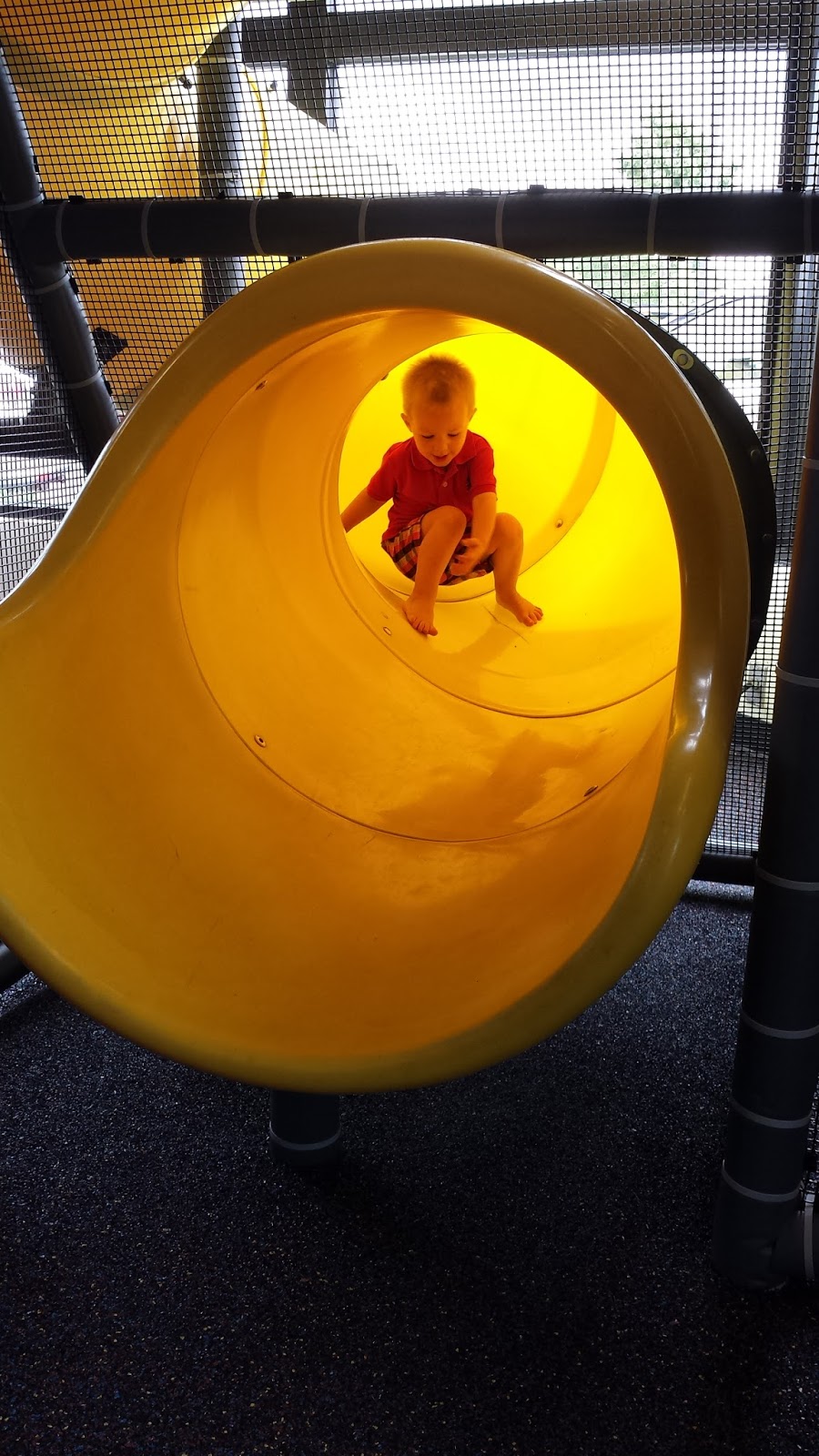 We had lunch while he played and once he decided he was hungry we got back in the car to let him eat while we drove around. Genius! Adam has a friend that lives and works in the area so we stopped by his place for some tips on surrounding areas. He showed us the affordable areas nearby and explained what traffic would be like. Brentwood is the nicest area of Nashville and where all the country stars live. You can tell! I’ve never seen more gated homes and entire subdivisions in my life. It’s really pretty with lots of trees and rolling hills and it’s expensive. We drove around looking at number of areas and homes that are currently on the market to rent. On the way home, we stopped and got Landon some little plastic dinosaurs so he would be occupied at the end of a long day in the car. It was a great idea and he didn’t ask once if he could get out (which he likes do once he’s over riding in the car). We made this little video of him playing with them and saying his new favorite word courtesy of a weekend spent with Grandma.

We plan on going back this Saturday to tour a few homes. The main problem we face right now is where I’m going to work. There is an area just South of Brentwood that we like, but if I have to work downtown then it would make for a long drive and bad traffic. Another area I’m really interested in is southeast of downtown and directly east of Brentwood. It’s surrounded by a huge reserve and the area is supposed to be nice. Hopefully, I can get the job ball rolling so we can pick a place and start the moving process.

I was honestly super excited/thrilled about the opportunity without a single bit of sadness until Friday night when I told my friend Mary that he had gotten the job and she started to cry. Then Marty shared that she already cried. It really hadn’t hit me until that moment how hard it is going to be to leave our friends and family. Everyone who knows us knew Adam had been looking all over the country and we would eventually move, but the fact that it is actually happening and so soon has come as quite a shock. I can understand. It’s even shocking for us. On the upside, I know the friendships we have will continue despite the distance and I’m trying to think of all the positives like how fun it will be to have girl’s days/nights in Nashville. It will be exciting to be in a new city full of new adventures and experiences; I just wish I could bring everyone with us. It’s great that home is just a short drive away and we will have a multitude of places to stay when we come back. We want to get at least a three bedroom to make sure we have room for guest especially the grandparents who will probably be on a constant visit rotation.

As I said, there is still a lot in the air right now and the only thing we know for sure is that Adam starts on August 19th. It’s been a little crazy since we found out especially since he got the offer hours before he left on a business trip. I was left alone for three days with tons of questions to ponder, trying not to freak out. I can honestly say this is going to be the biggest life change we’ve experienced thus far. Just to prove how crazy it’s been I don’t think I’ve been on pinterest in almost a week. Yeah, nuts!!! We know that everything will work out and we are blessed to have plenty of friends and family that can help make the transition as smooth as possible for all of us. Most of all, I’m so proud of Adam and happy that all his hard work is paying off. I would go to the moon with that man if he asked and I know that no matter where life takes us we will always have each other and that is all I need.
Posted by Unknown at 3:47 PM