We've been living in Nashville for two months, but this weekend is only the second weekend we've actually been able to spend time here. The first was spent mainly running around and getting our house in order, but this weekend was full of food, drinks, and good company. I was going to use the word debauchery, but then I googled the definition and realized we didn't take it quite that far.
My best friends and their husbands came down for our first fun-filled Nashville weekend. Mary and I kicked it off right Friday night by going to the Luke Bryan concert. While I'm not a country fan, I'm always down for a good time and since Mary had NEVER been to a concert, I thought it was only appropriate that I help her change that. 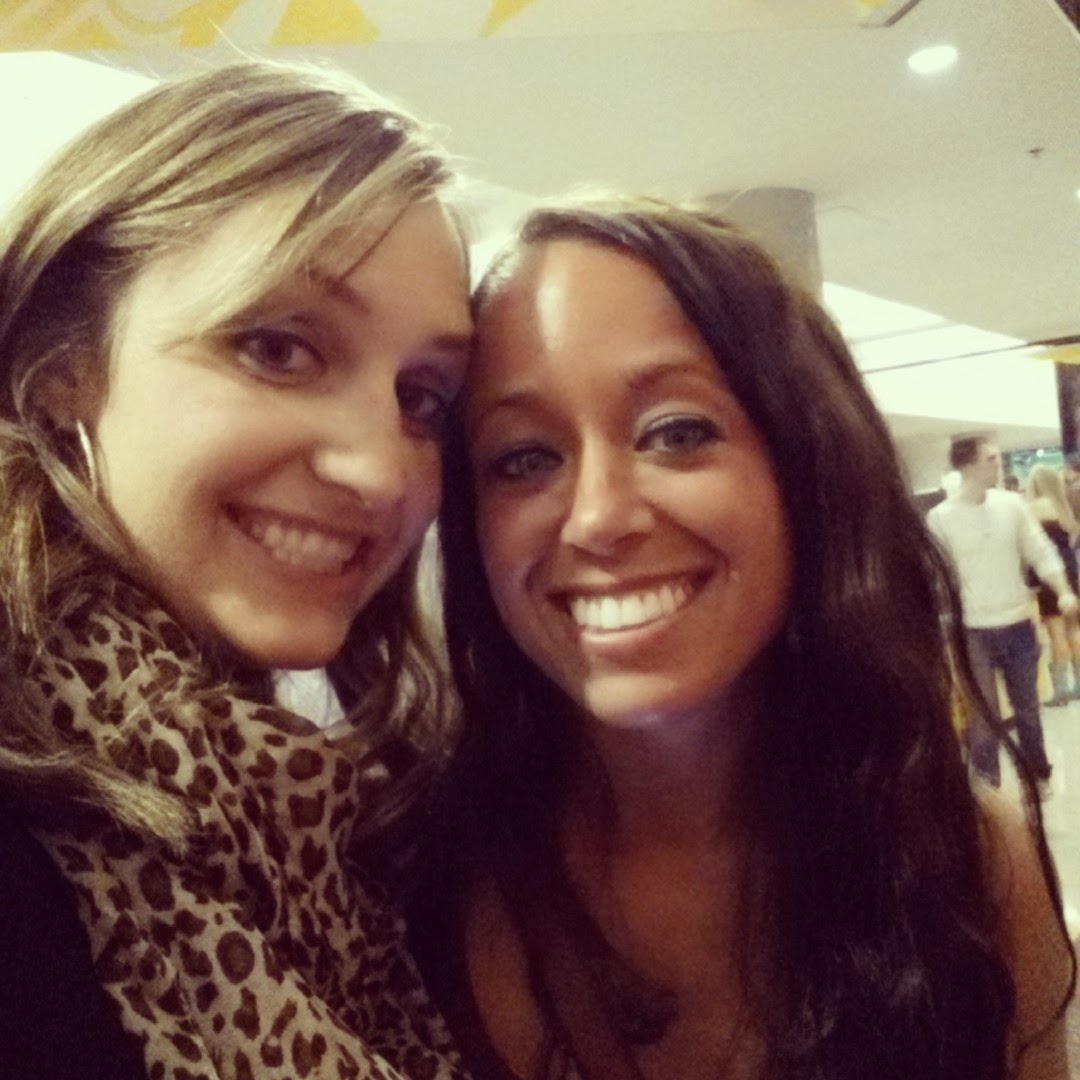 We had floor seats, but managed to squeeze in even closer to the stage for the first opening act. 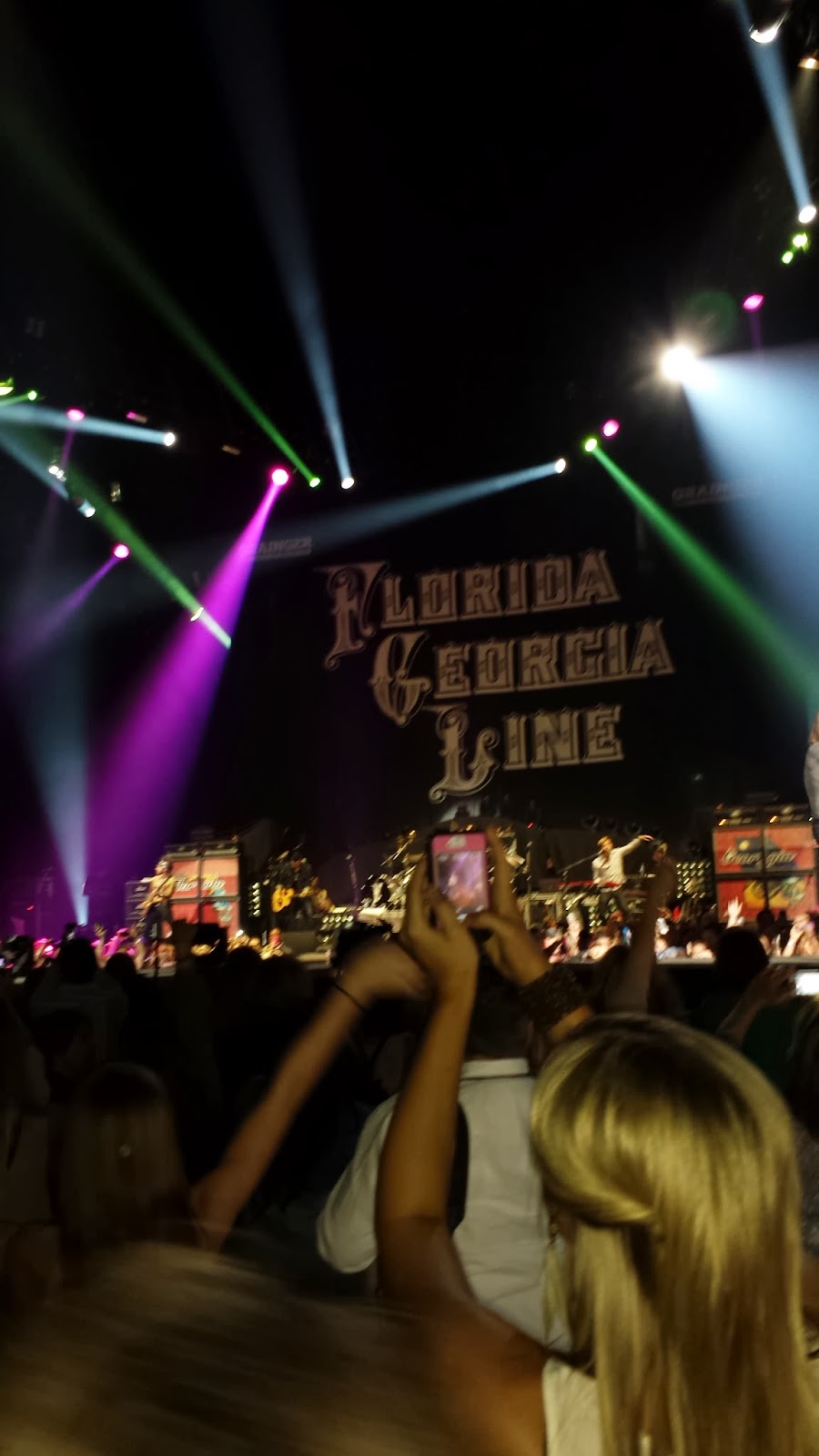 Of course none of my pictures from the night came out very well, but that didn't stop me from taking a bunch or from sharing them! Florida Georgia Line was great and while it looks like we were far away from the stage, it actually made a T and anytime the guys walked down the stage they were right in front of us. We stole the perfect seats, but once it was over we decided to get a drink and possibly a foot long hot dog at the concession stand. Yes, it was delicious! We made it back to the floor and found more great seats just in time for Thompson Square. 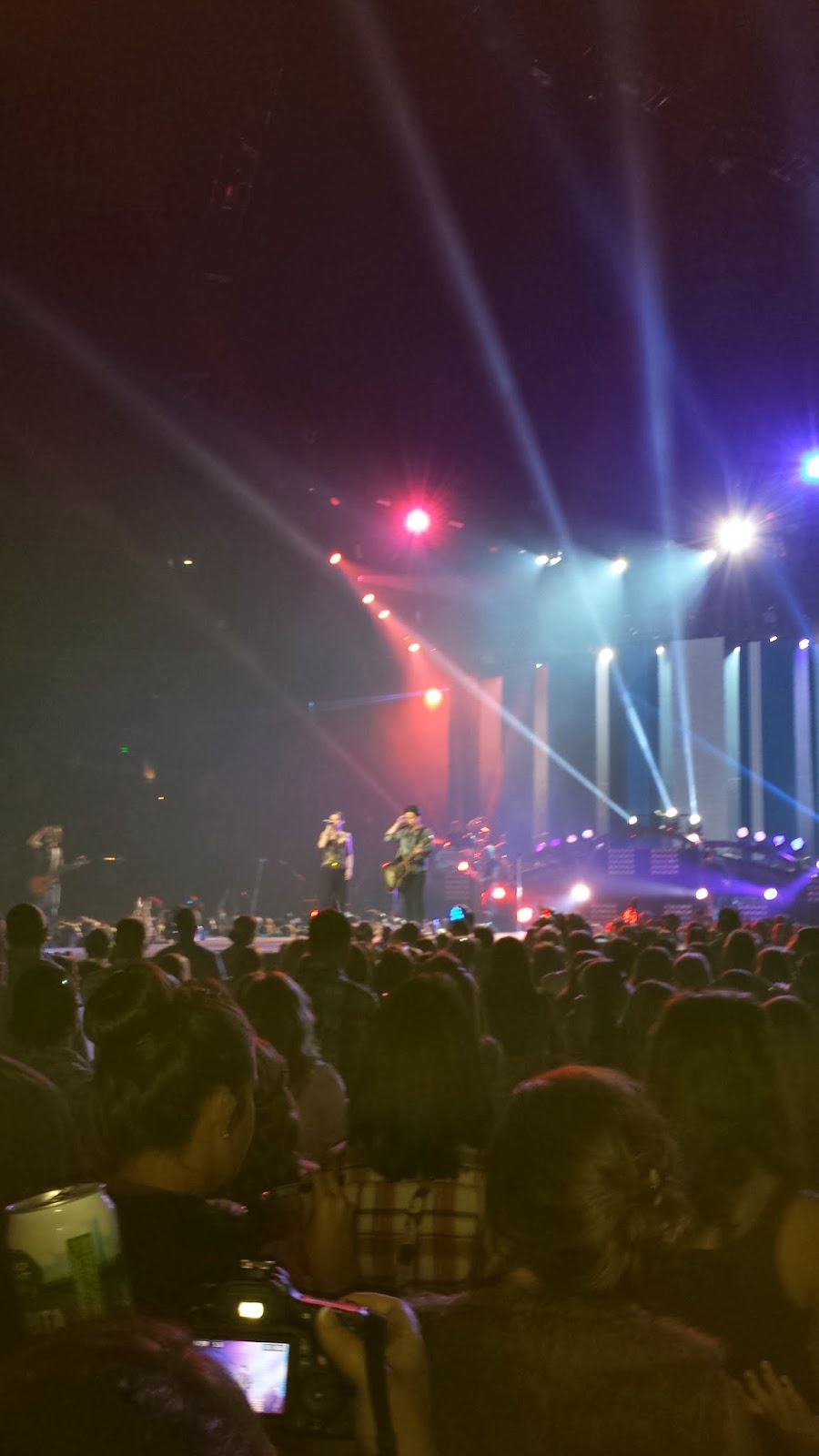 Like I said, I'm not a big country fan, but both opening acts were awesome. I didn't know that the two singers from Thompson Square are married and I have a soft spot for cute married couples. They were too sweet on stage being lovey and even kissing a few times. Plus they started in Nashville and talked about how just a few years ago they were at a bar across the street just trying to make it and how honored they were to be playing at the Bridgestone Arena.They definitely won me over. I'm officially a fan! Even now as I sit here  listening to their music, Landon has informed me that he AND his cars like the "moosekit". I have to admit it's pretty good stuff. Once they were over it was time for the big guy. Mary was pretty excited to see her boo. 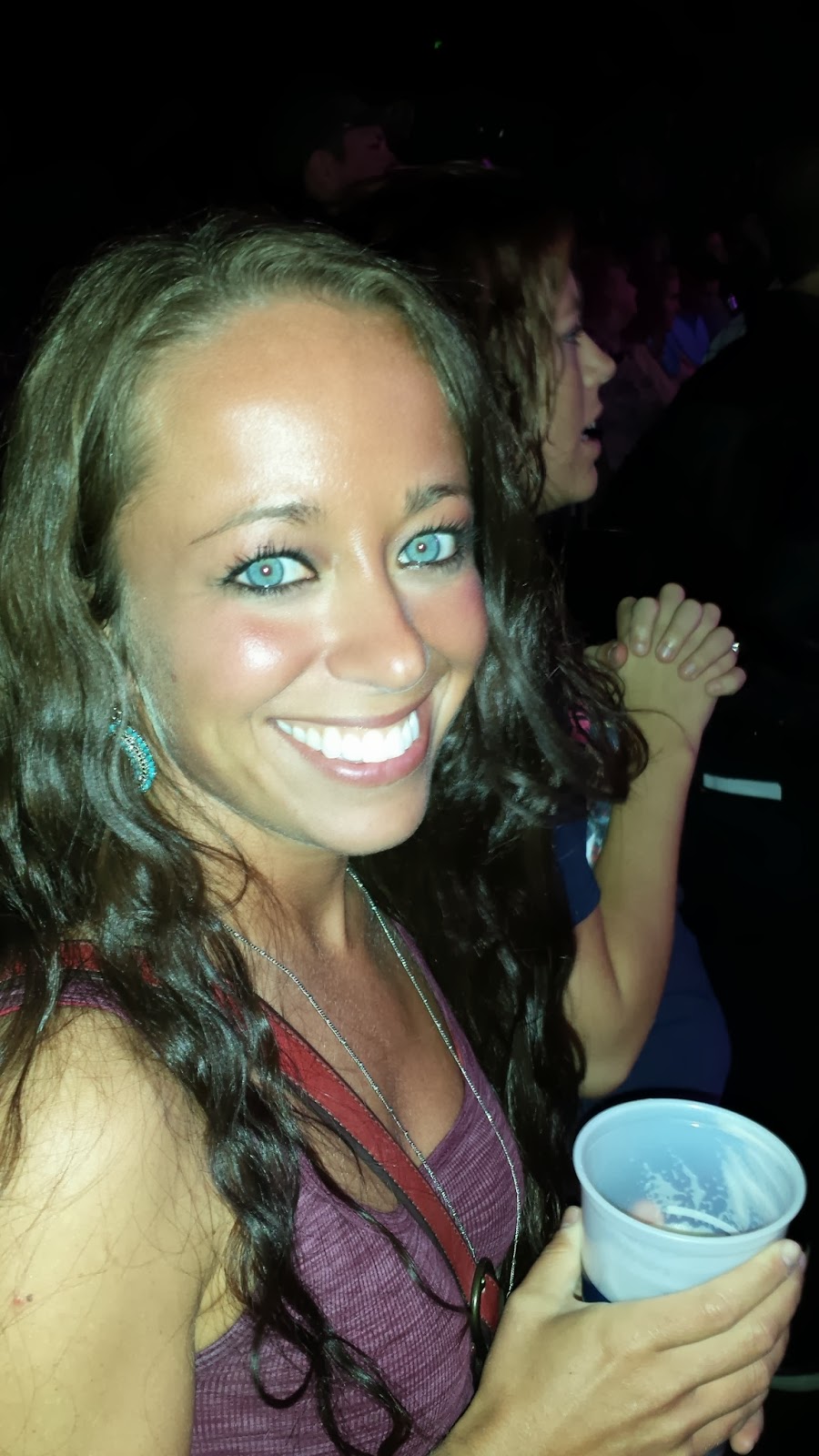 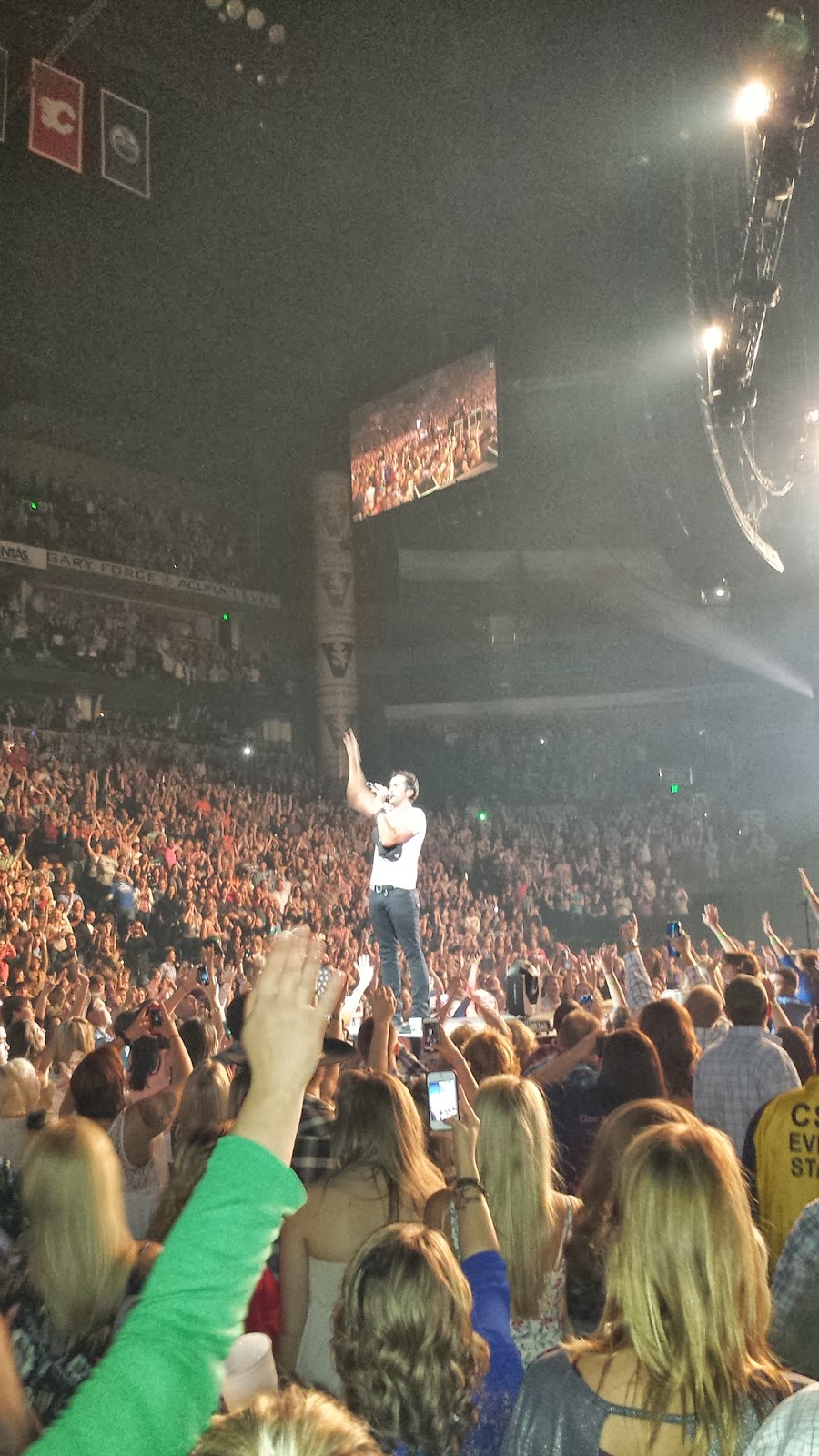 We were so close that at the end we tried to get right up to the stage, but got turned back quickly by security. It was worth trying. I think Mary was overcome by all his gyrating and had to at least try. He put on a great show and we had a great night! I felt like I was enjoying Nashville the way it was meant to be enjoyed. Country fan or not, Nashville is the country music capital and I had to do it up right at least once. Best picture of the night though belongs to this selfie. 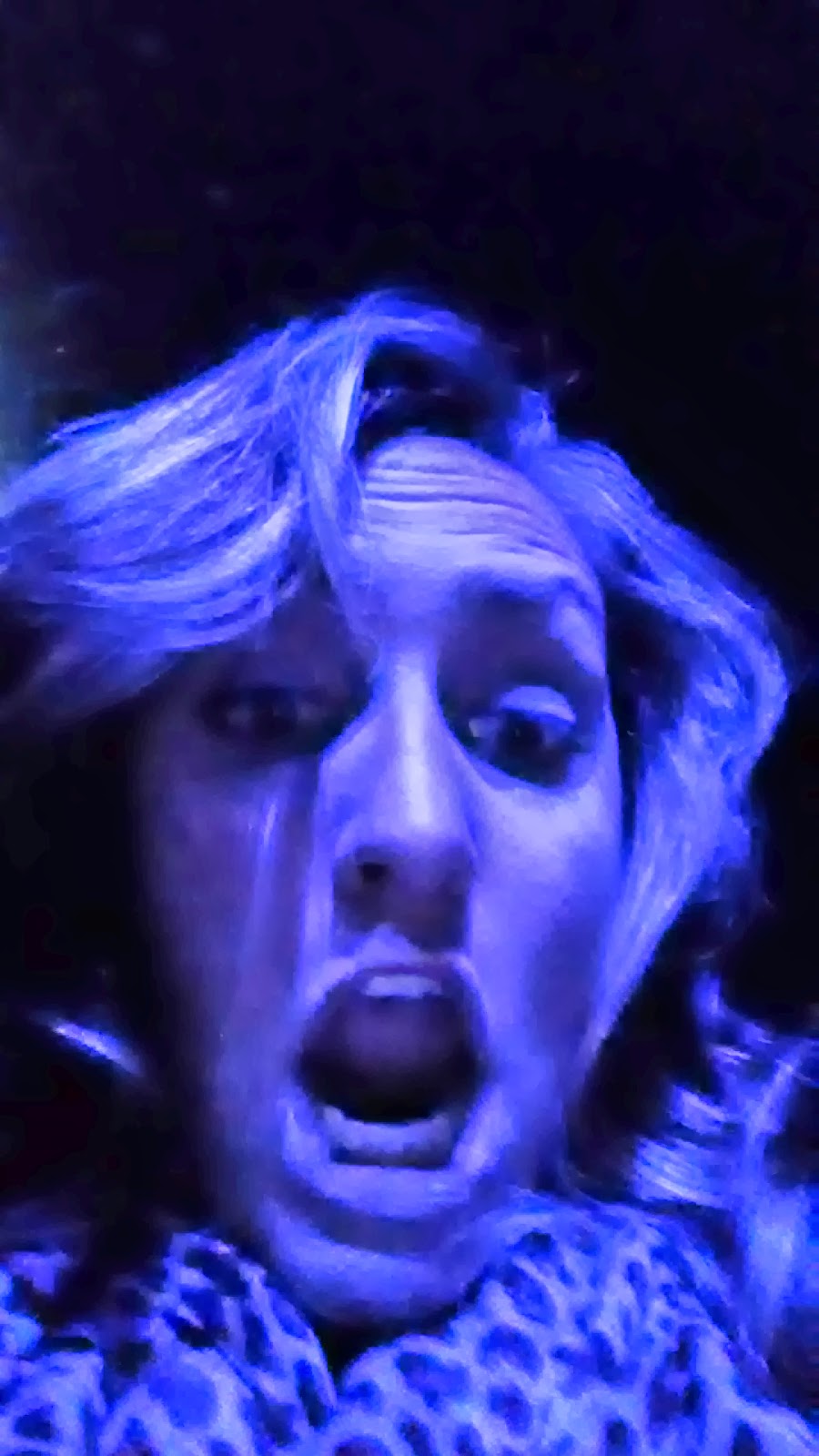 I don't remember taking this picture at all and I'm not sure what I was trying to do here, but I just had to share. I think it belongs with our pictures of the wall at the bar from Mary's birthday celebration. At least I can laugh at myself. Matt and Marty arrived while we were at the concert and by the time we got home Marty was already asleep. Mary and I haphazardly put together THIS overnight crockpot casserole while possibly eating some pizza rolls. Believe me when I say that if we can do it, anyone can and it was pretty good too! It was great for having lots of guests and needing something easy and fast. After breakfast us girls went to the Opry Mills Mall to do a little outlet shopping. The Opry Mills is a huge mall with both regular and outlet stores and since it was a nasty morning it was great to go outlet shopping in an indoor mall instead of the regular outlets. I don't think we managed to get through even half of the mall, but that's ok, because it's only about ten minutes from my office. Now that I've been once, the urge to go back is strong. Dangerous! And although shopping is what us girls do best, the highlight of our day was our extra special dinner that we had planned at a Brazilian Steakhouse. Driving through Nashville, Adam and I had seen billboards for this restaurant and it intrigued us. Since I work with two women from Brazil, I asked them about the place and they both said it would be good for our guests. It was unlike anything any of us had been to before. Having made reservations we were given the best seats in the house, right next to the churrasco or grill station. There is no menu or ordering and the food is unlimited. They start by bringing a variety of appetizers to the table. They also have a huge side bar which has everything from soups, salads, potatoes, fruit, olives, chesses, etc. It was all delicious, especially the Strawberry salad. Once you are ready, meat carvers come around to your table and carve a variety of freshly cooked meats. 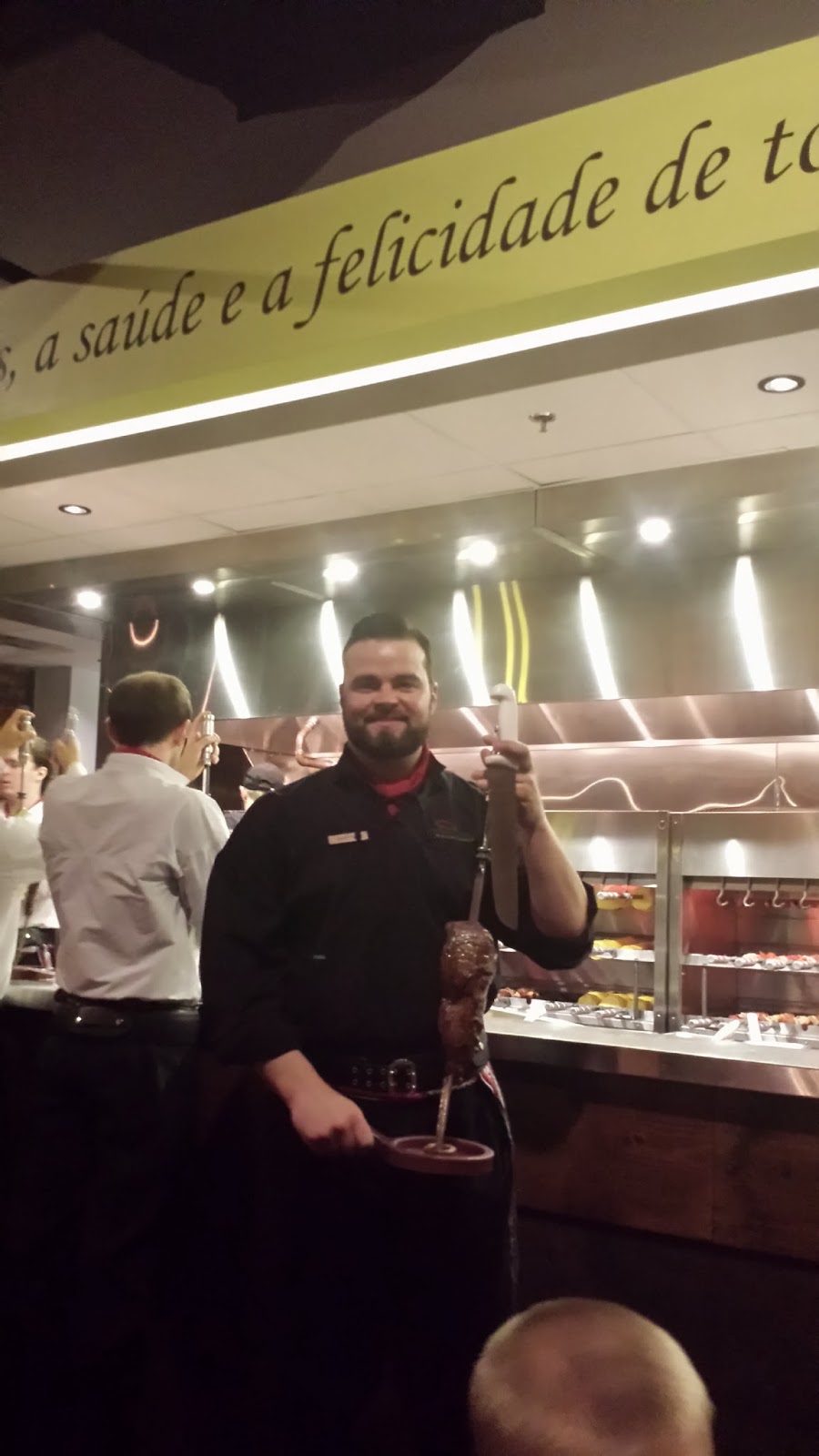 At first we thought they were being a little stingy with the serving sizes, but when we asked how many different meats they had and they told us 12-18 we realized there was a reason for the small portion sizes. They had all kinds of meats from fish with bell peppers, turkey wrapped in bacon, garlic beef, parmesan crusted pork lion, sweet and sour chicken, and so on. I can't even remember them all. On top of the regular items they were also have a wild game fest which included wild hog, frog legs and rattlesnake sausage. I tried the hog and rattlesnake and surprisingly enough the rattlesnake was one of my favorites. One item we all loved was the grilled pineapple. It was crispy and coated in a sweet syrup that mixed so well with the pineapple. It was divine and now we are all on a mission to learn to do it ourselves at home. Even Landon had a good time and thoroughly enjoyed the night. It's the first time he's spent over two hours at a restaurant and not gotten completely bored of sitting in the chair. 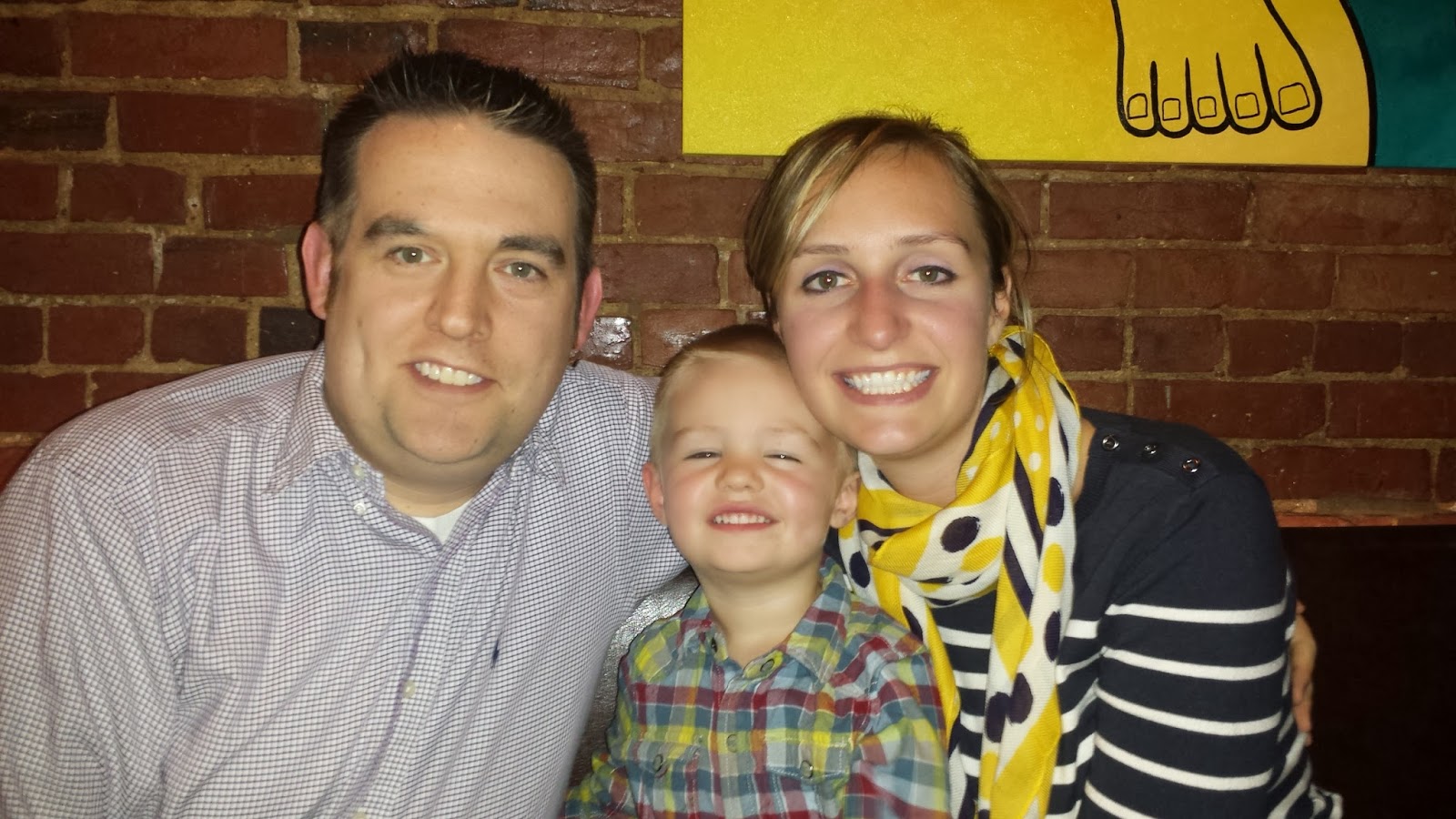 Believe me when I say that it was a one of a kind experience. It's not something we will do often and ALL of us felt almost very sick from the amount of food that we ate. I wouldn't be surprised if I gained ten pouds...like at all. You definitely have to enjoy meat and be ok with a variety of meat items, but even for picky eaters like we are, it was a real hit. It was great to share the fun experience with our close friends and I look forward to man more friends weekends in the future. Despite our best efforts to convince them to stay Mary had to work Sunday so they left once we got back home.

Sunday morning the four of us and Landon went out early to try one of Nashville's most famous breakfast places, the Pancake Pantry. When we arrived before 8:30 to find a line outside wrapped around the building, we found a plan B and ate at a cute little cafe called Fido. Landon was excited for his pancakes which he likes to refer to as cupcakes. 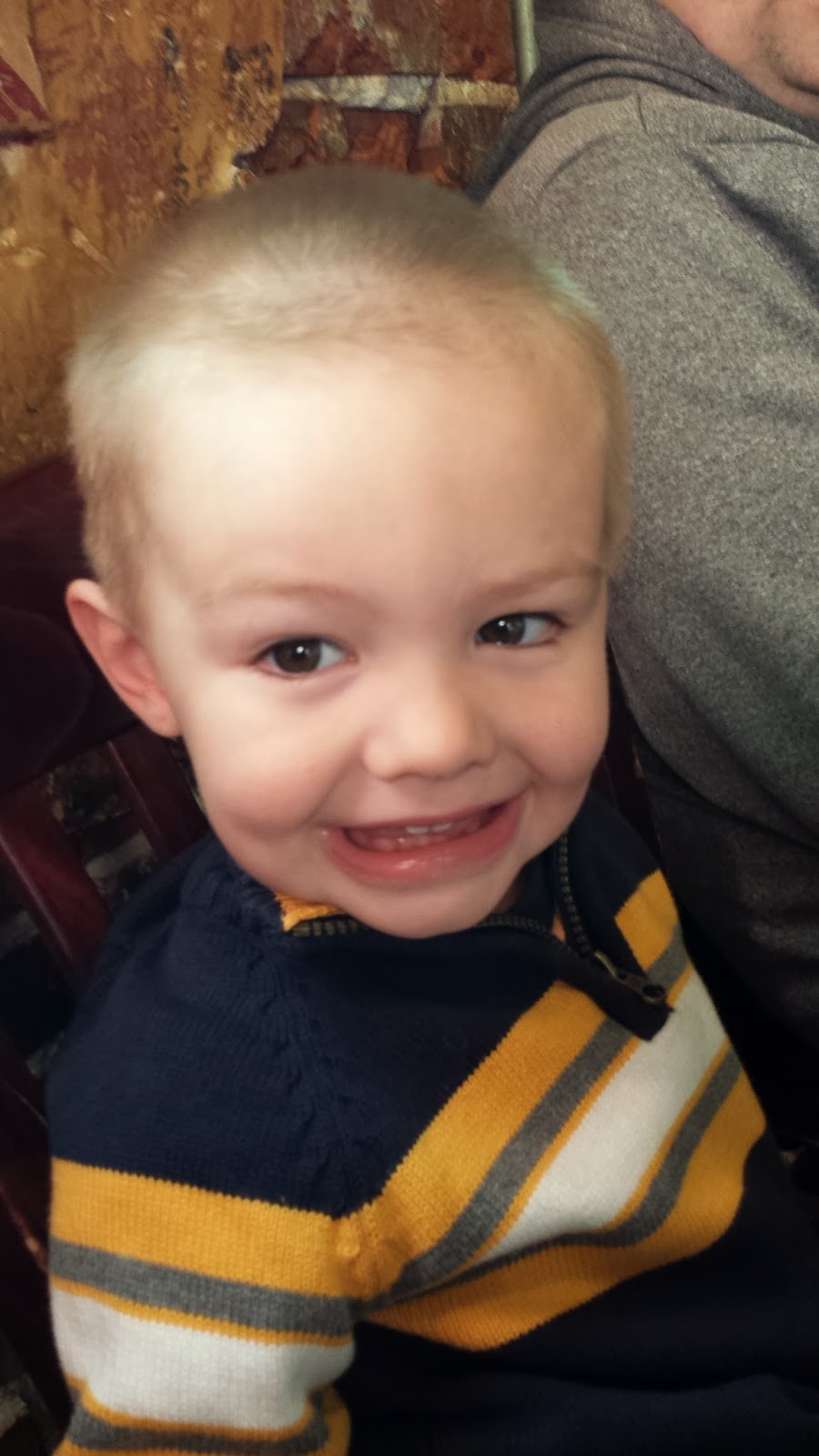 I ordered cheese eggs with herbs and some hot chocolate and while it was absolutely delicious I think my stomach was still working on dinner from the night before. After eating most of this I was honestly sick. Why do I do this to myself? 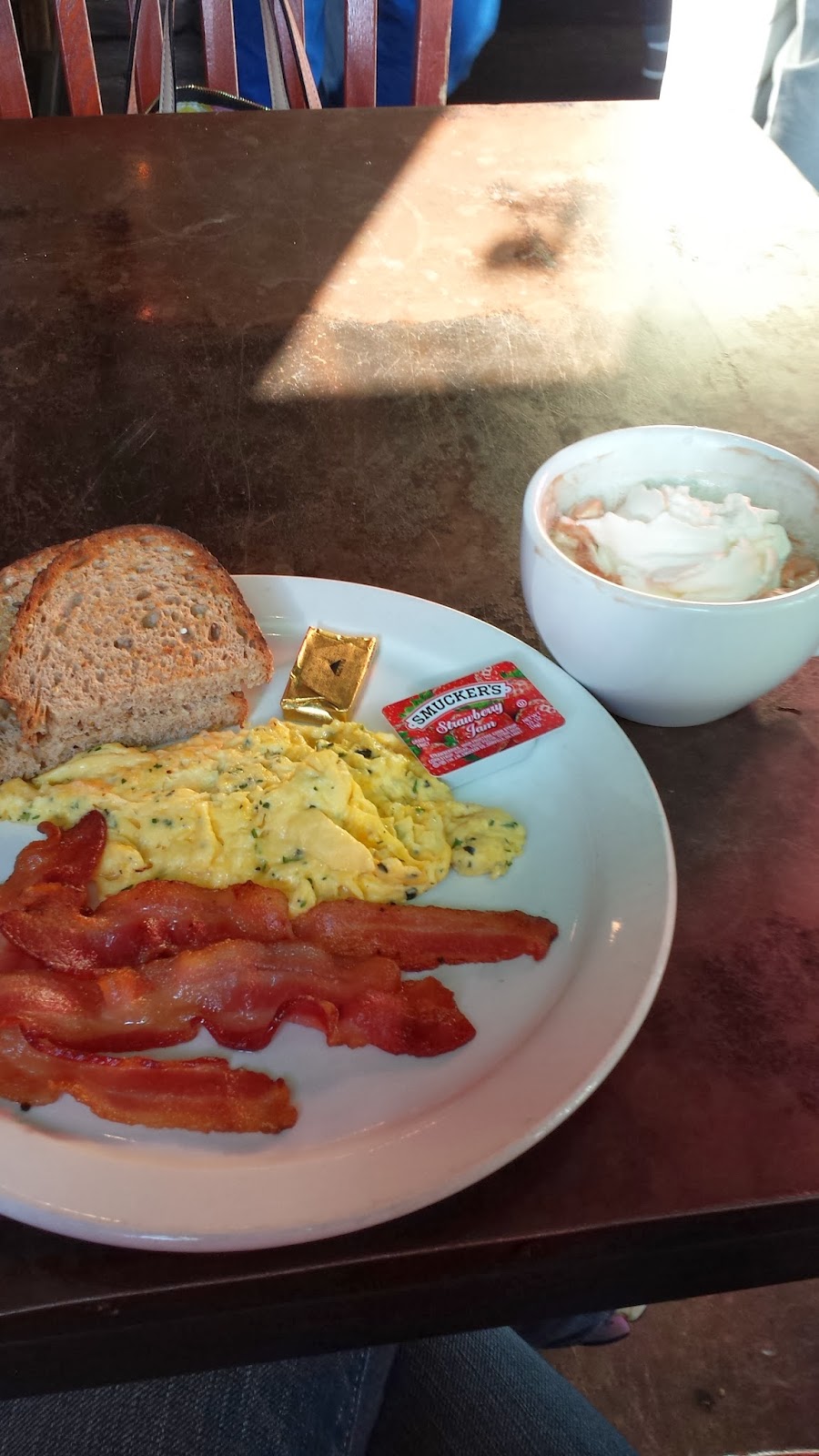 After breakfast we said our goodbyes and Matt and Marty headed back home. We took a short rest at home where I laid horizontal for an hour and tried not to lose my cookies. It was hard. 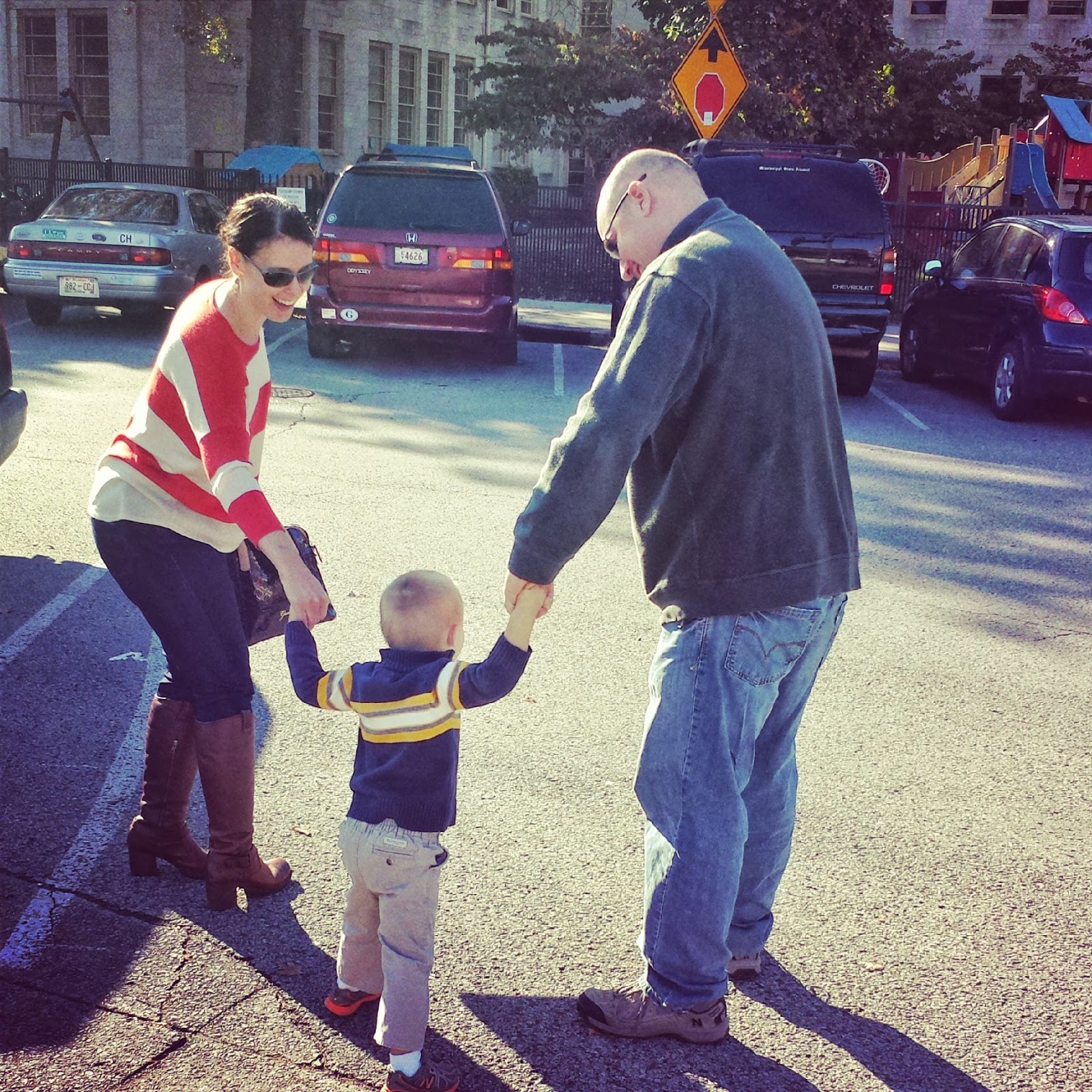 Just about the time I was feeling human again my Dad and Step Mom arrived for a short visit. This was their first time seeing our new place. Landon was super excited to have his Papa at his new house. I know he misses seeing him all the time. It was a short visit, but we followed with the weekend tradition and and went and got lunch before they left. Unfortunately, when they left so did Adam who had to go on a business trip for the week. It was strange going from waking up Saturday morning to a house full of people, to Landon and I chillin all alone Sunday night. We did however manage to make good use of our time and get out some winter clothes. Winter is coming people! I am not prepared. We even came across some race car pajamas which means he can be head to toe in his most favorite thing ever...RACE CARS! 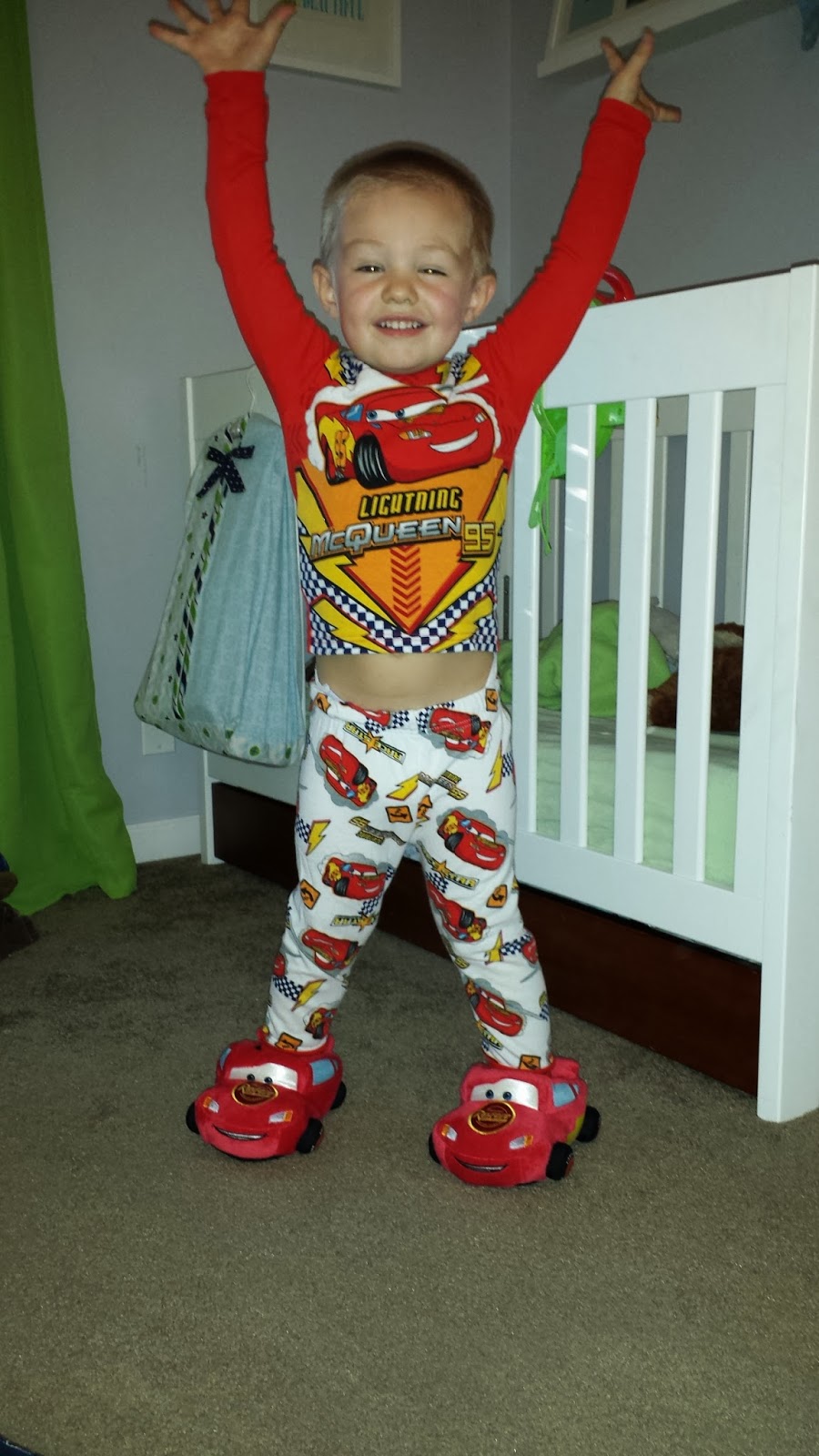 This weekend was a blast! I'll probably spend the entire week recuperating and trying to lose however much weight I've gained, but it was totally worth it. I'm glad we live close enough that I can still hang with my girls and it's great to invite them to our new city to have new experience with them. I'm already working on our next weekend together and coming up with something just as fun, but this weekend will be pretty hard to beat. But we will give it our best shot!