I know the term "Holiday Season" is usually reserved for the Christmas season and may or may not include Thanksgiving, but to me the Holiday Season begins around Halloween. One day it's Halloween and then next day you're celebrating New Years. Ever year it happens that fast, only each year it seems to speed up just a little bit more. The stores, for example, have already celebrated Halloween and Thanksgiving. It's currently Christmas, but will be Valentines in just under a month. So once we start celebrating Halloween I know it's time to gear up and hang on for the crazy ride of the holidays. Well this weekend we did just that...kicked off the holiday season. Saturday we headed to Louisville and to my most favorite place, Huber's. I've searched and searched for a similar farm/winery in and around Nashville, but nothing compares. There are wineries and there are farms, but nothing quite as great all bunched into one.

We started out the visit by heading to the pumpkin patch to get some pumpkins. We've taken Landon every year and I had high hopes he would really love it this year, but that just wasn't the case. It was nice day, but very windy which caused it to feel pretty cold. Still, it's never too cold for a tractor ride. 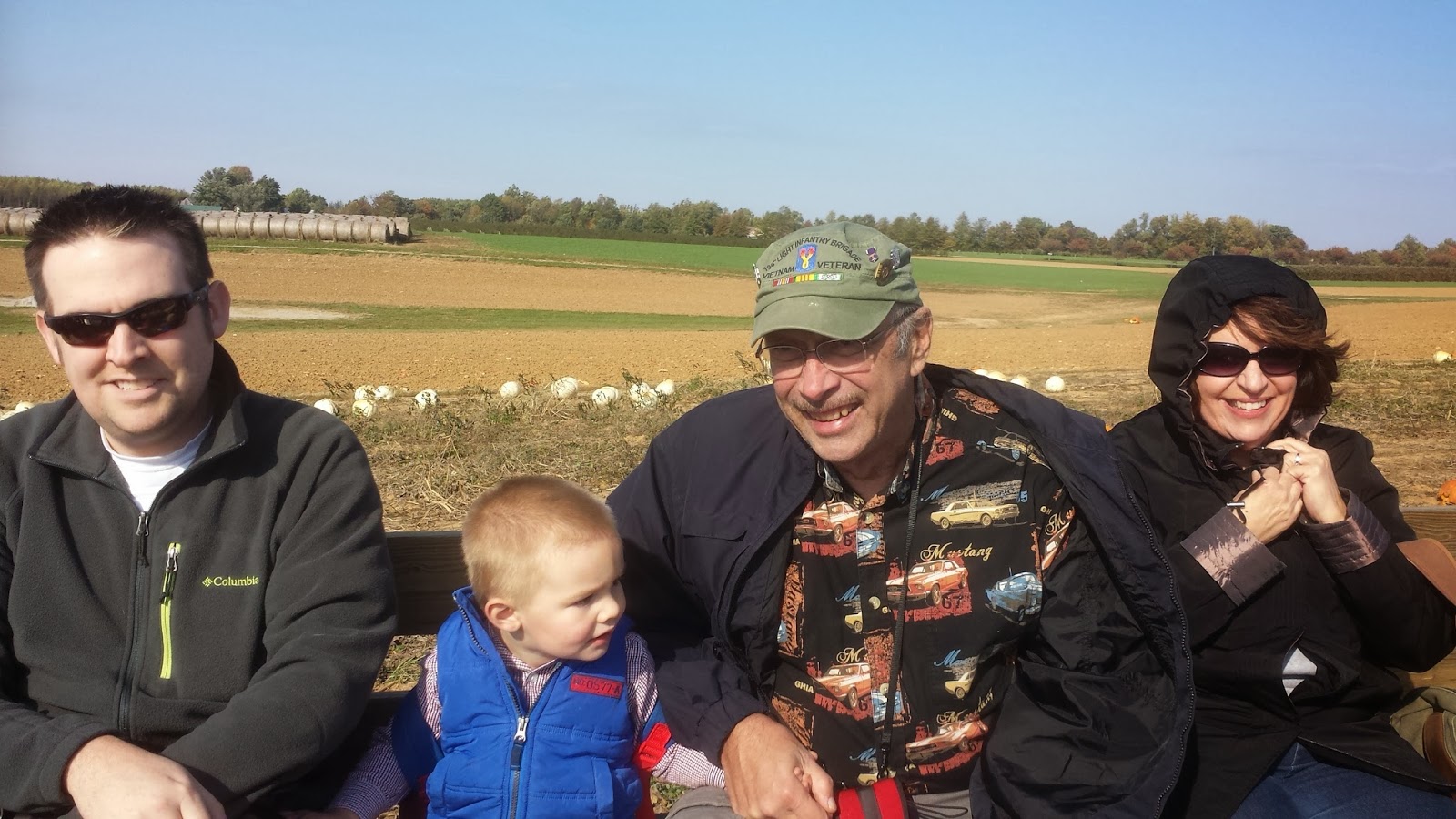 Not only that, but we didn't go until the last weekend of the season and the pumpkins seemed pretty picked over. Landon kept tripping on the vines which seemed much worse in that particular patch than normal. I tried to find a small pumpkin that Landon would like, but of course he picked out the biggest one he could find. 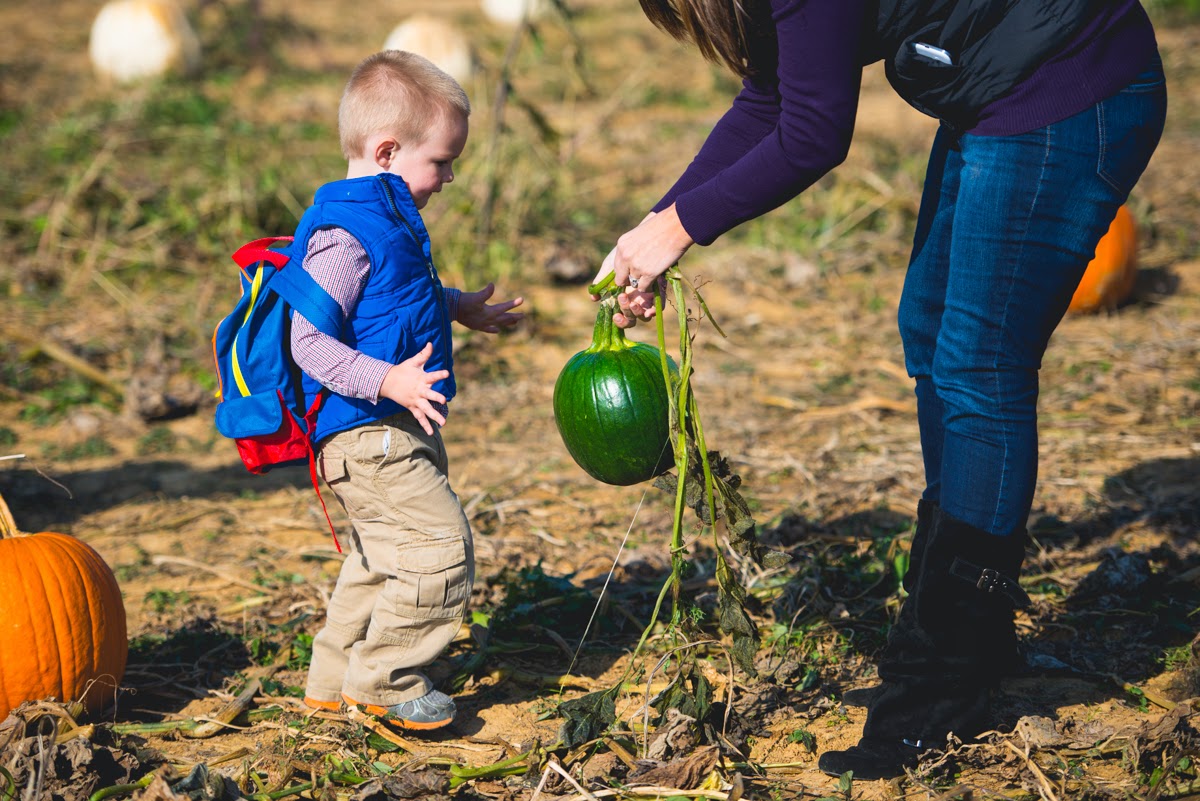 And of course, Papa made sure he got the one he wanted. 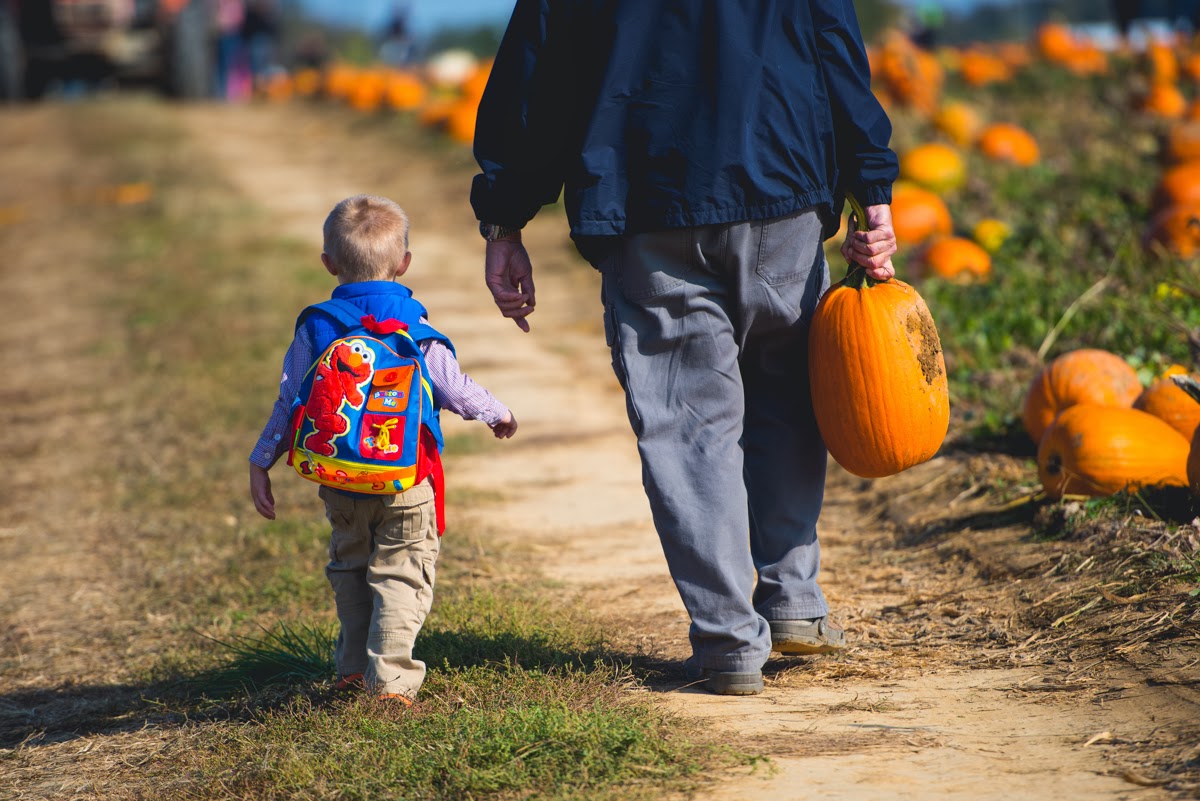 Despite not loving the pumpkin patch he did have plenty of fun at Huber's especially playing on all the tractors.. 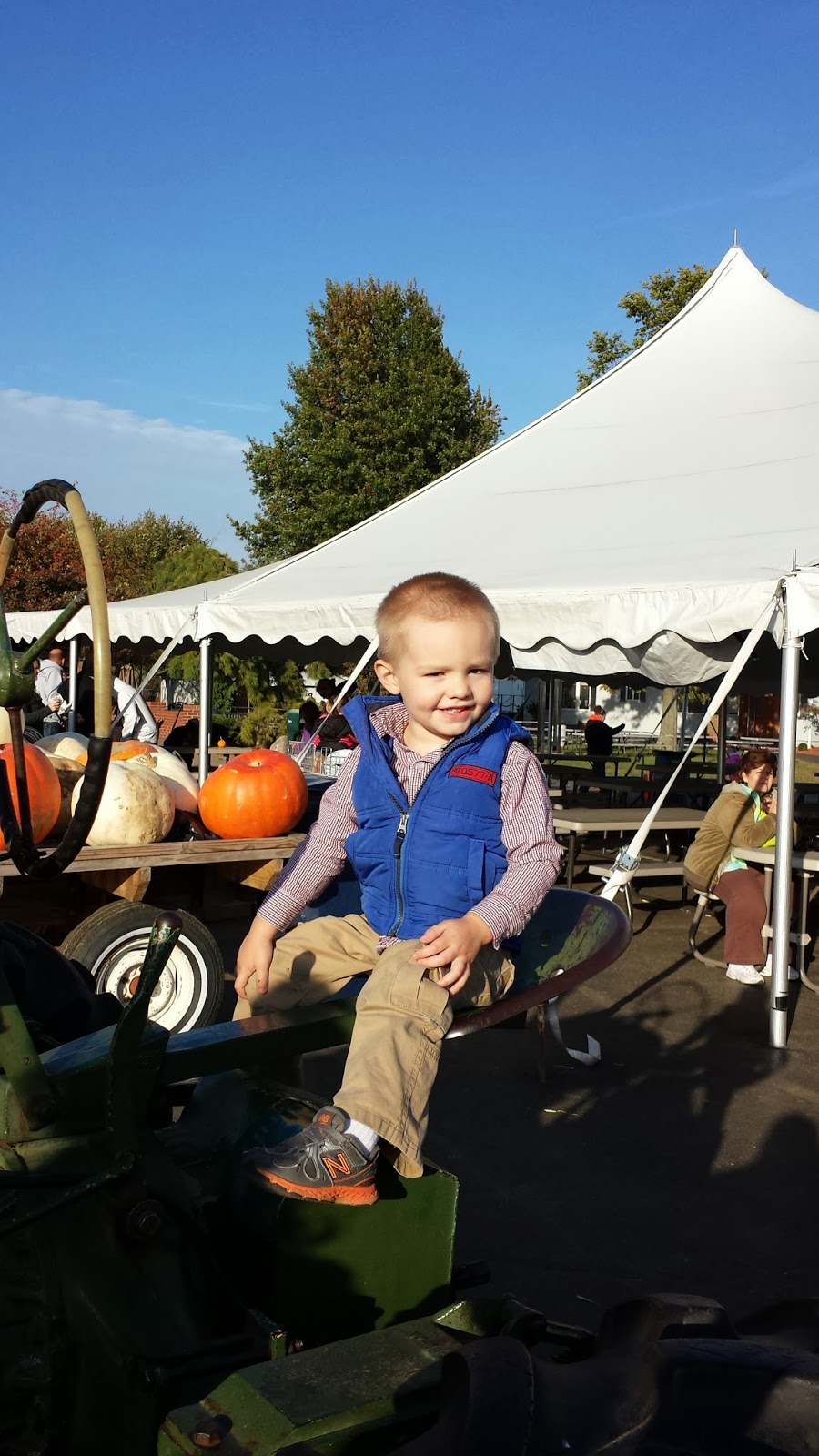 And we did manage to get this little family snapshot as well. It's little blurry, but I'll always love a picture of three of us. It's a rare thing. 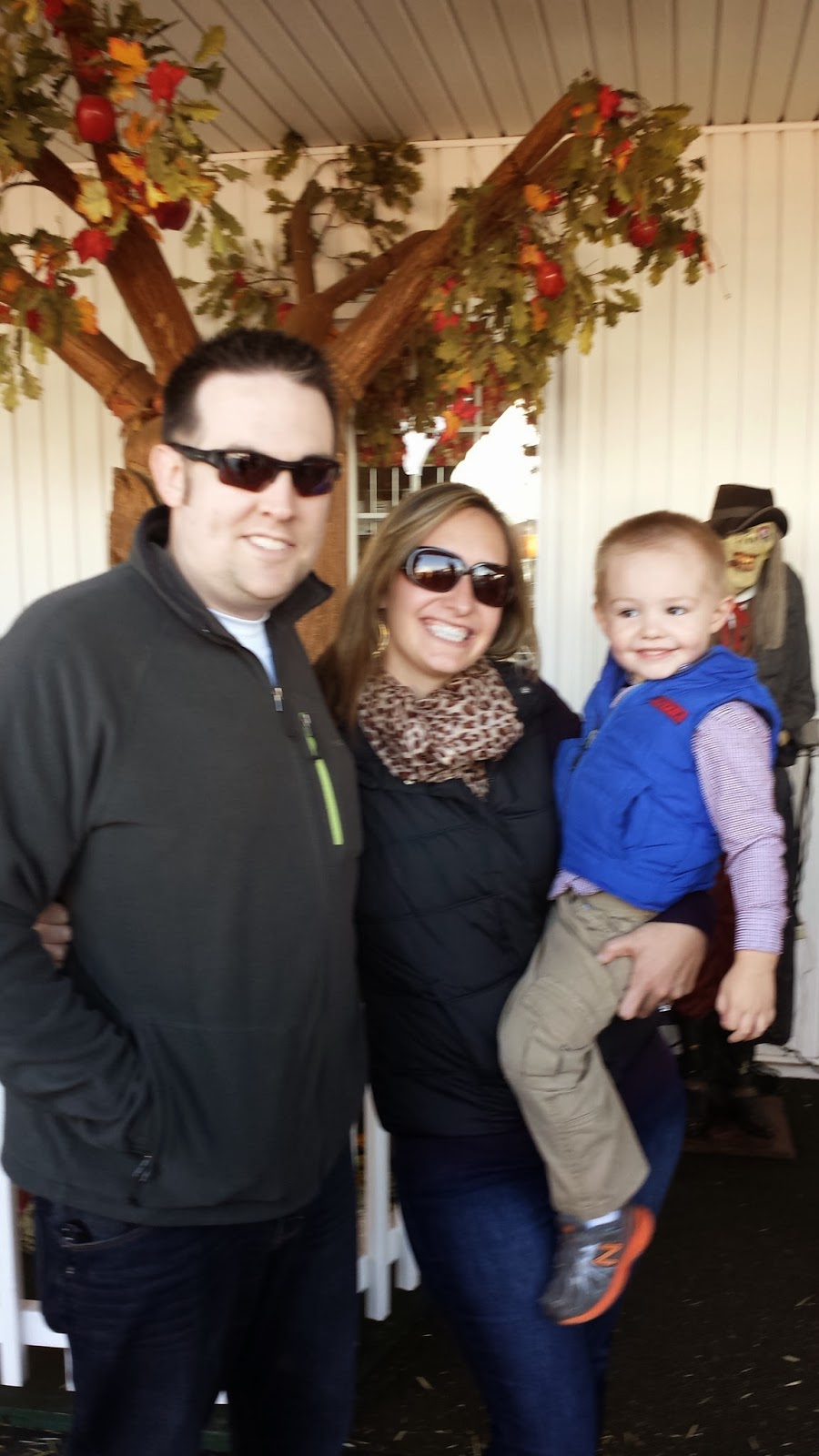 After the pumpkin patch, Dad and I broke off for the best wine club event of the year, the Pop's reserve barrel tasting. Pop's reserve is a semi-sweet red wine which is aged in used Bourbon barrels causing the wine to have the the slightest taste of bourbon. Wine club members get to sample 18 barrels to pick their favorites and the top three barrels are bottled exclusively for members. 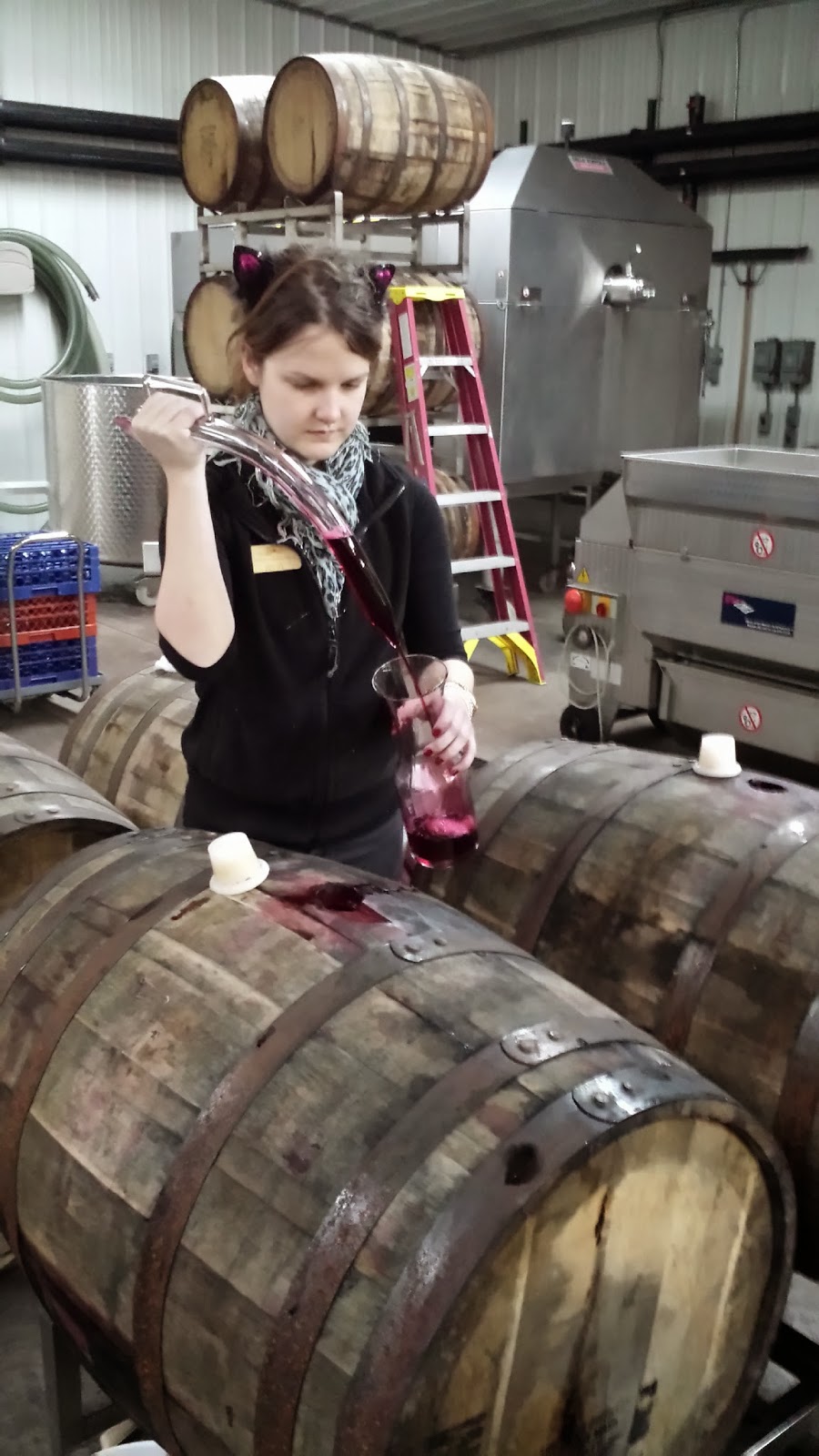 Each person received a score card and were asked to list their top three picks at the bottom. See the difference between my score card and the accountants? 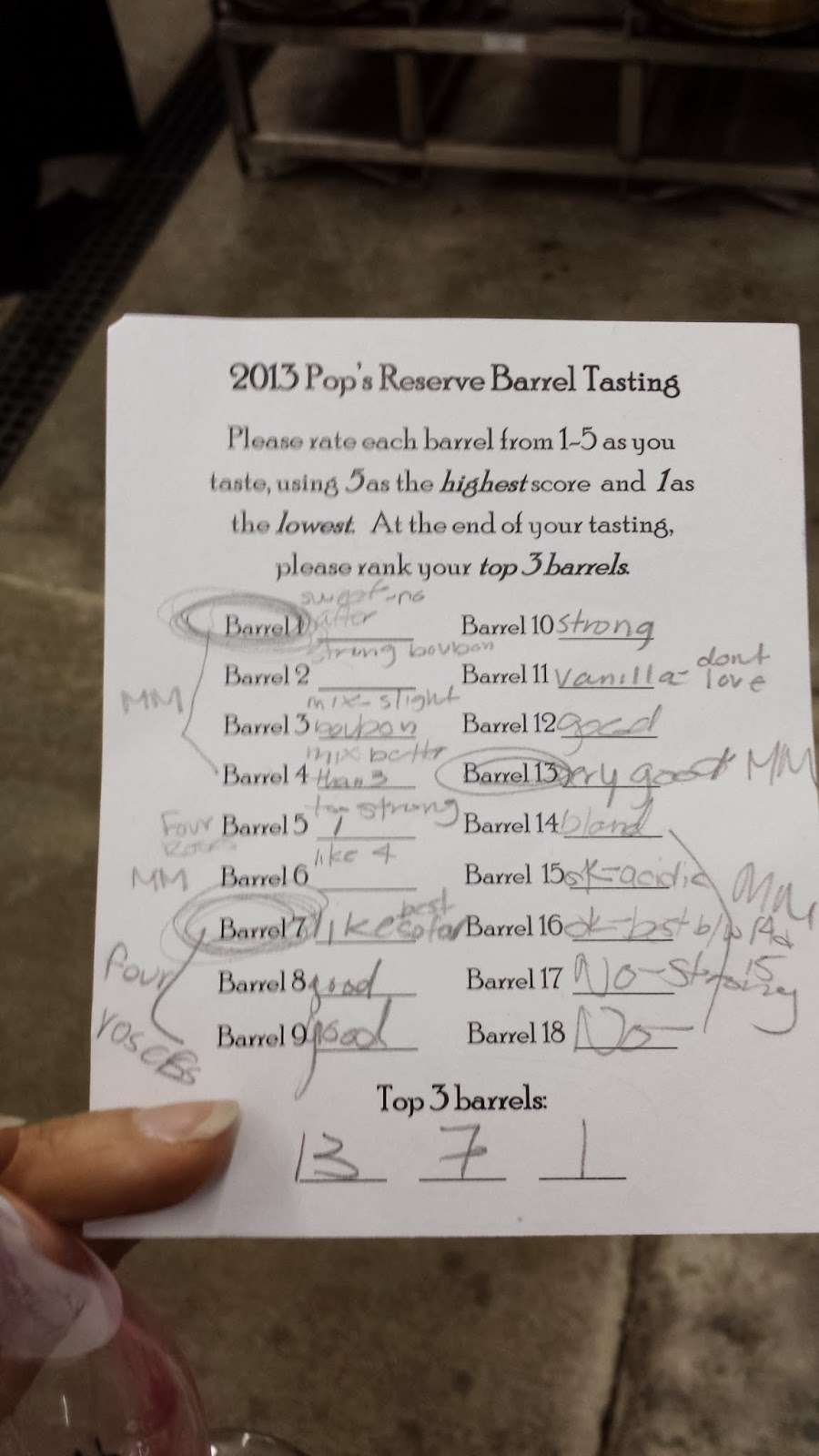 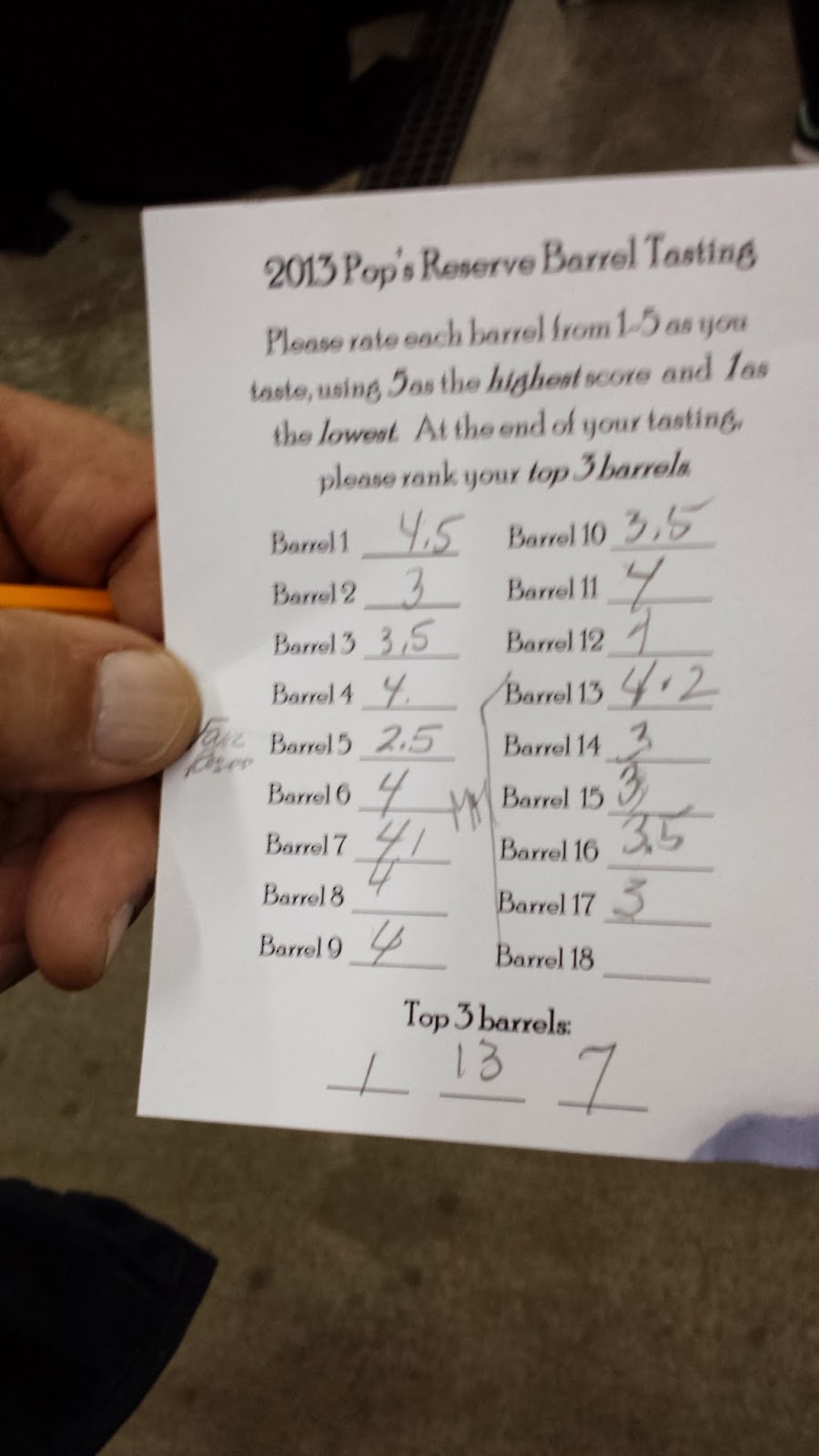 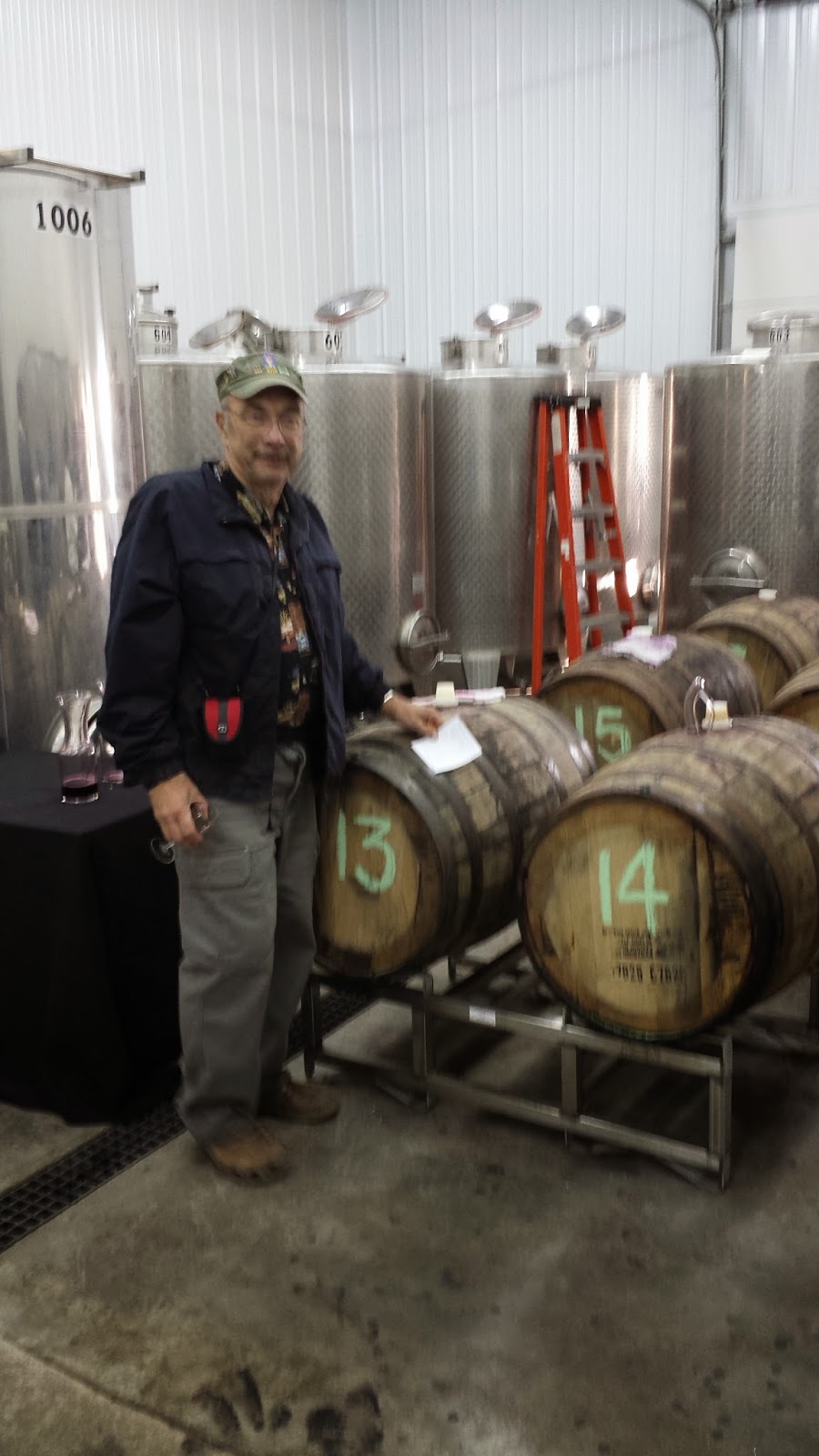 This was the most anticipated wine club event of the year for me and it didn't disappoint.
After dinner and a quick visit with Noni we headed home. Going to Louisville to see everyone is great, but being at home is nice too and we wanted to be able to spend Sunday relaxing. Which is exactly what we did. We slept in, ate some breakfast, took a nap and ran a few errands. It was a lazy day and a great one at that. Since we didn't do too much on Sunday we made a point to decorate our pumpkins Monday night. Although Landon wasn't thrilled with picking pumpkins he was excited to have a pumpkin of his own. We figured he would most enjoy painting a pumpkin giving his age and inability to really be part of the carving process. And boy were we right. 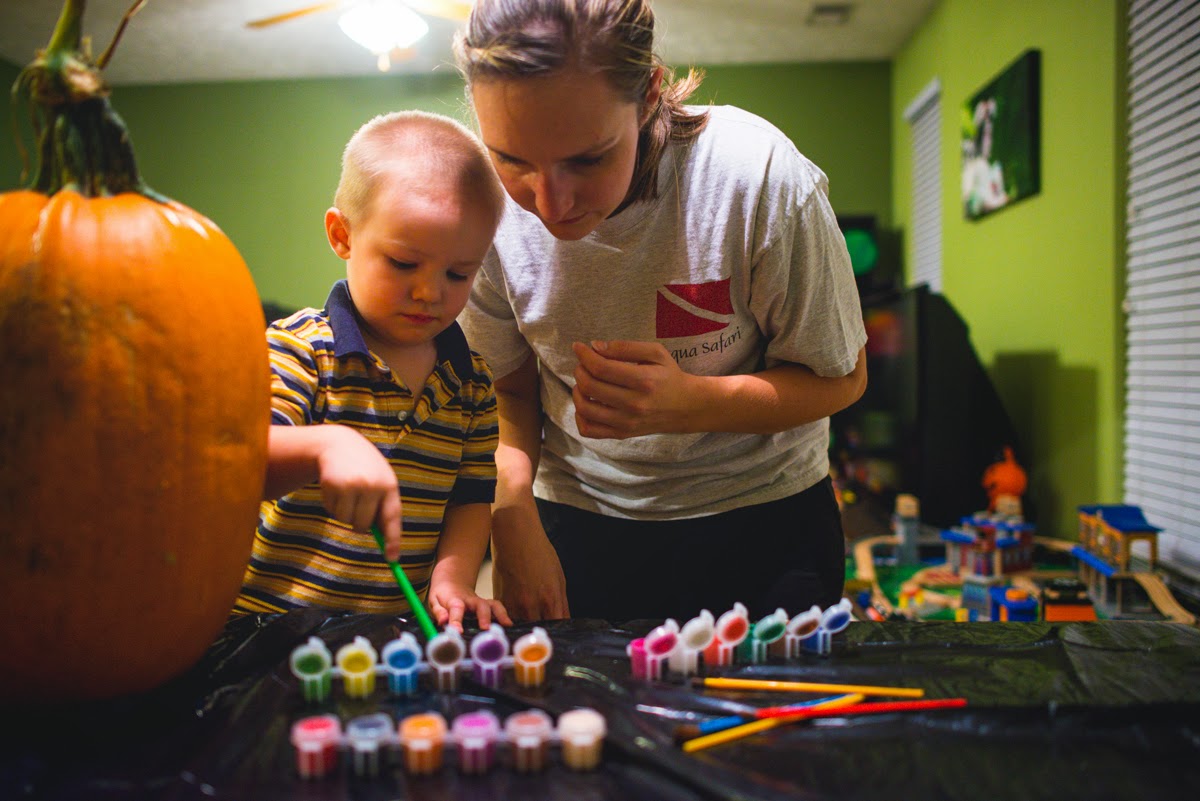 At first there was order and separation of colors, but that quickly went downhill. 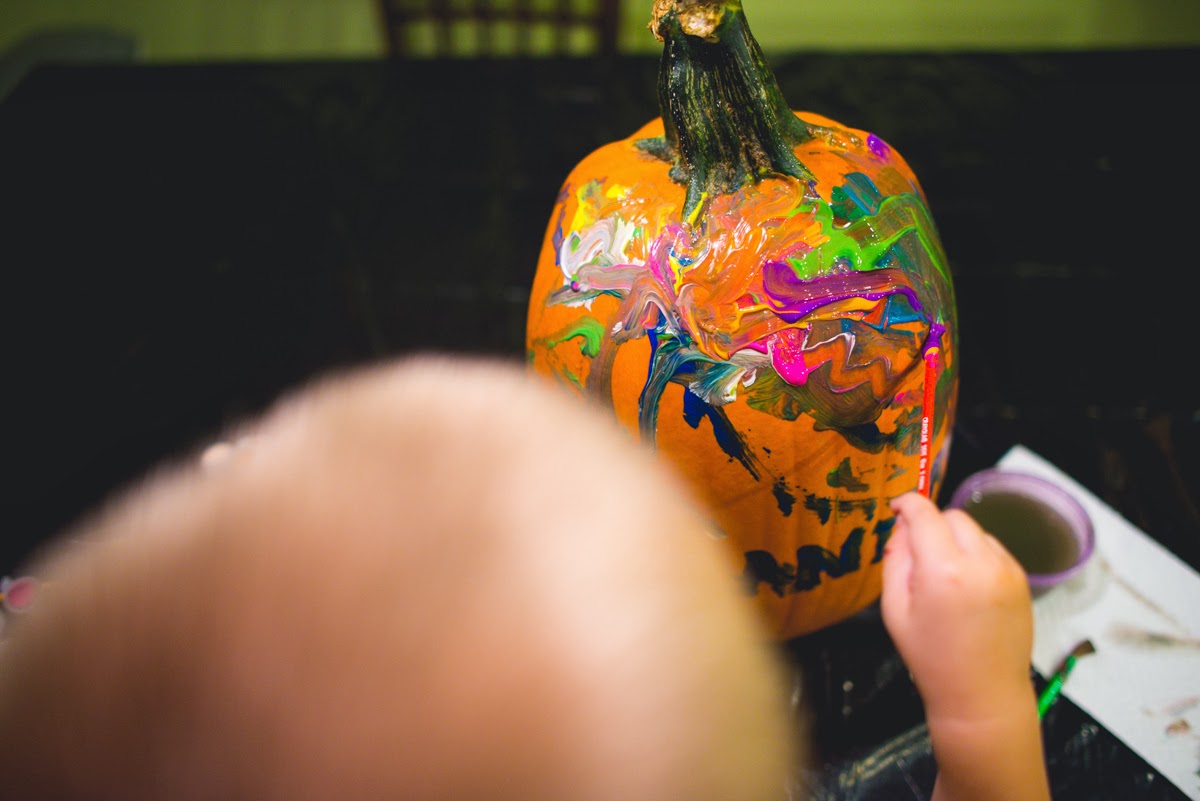 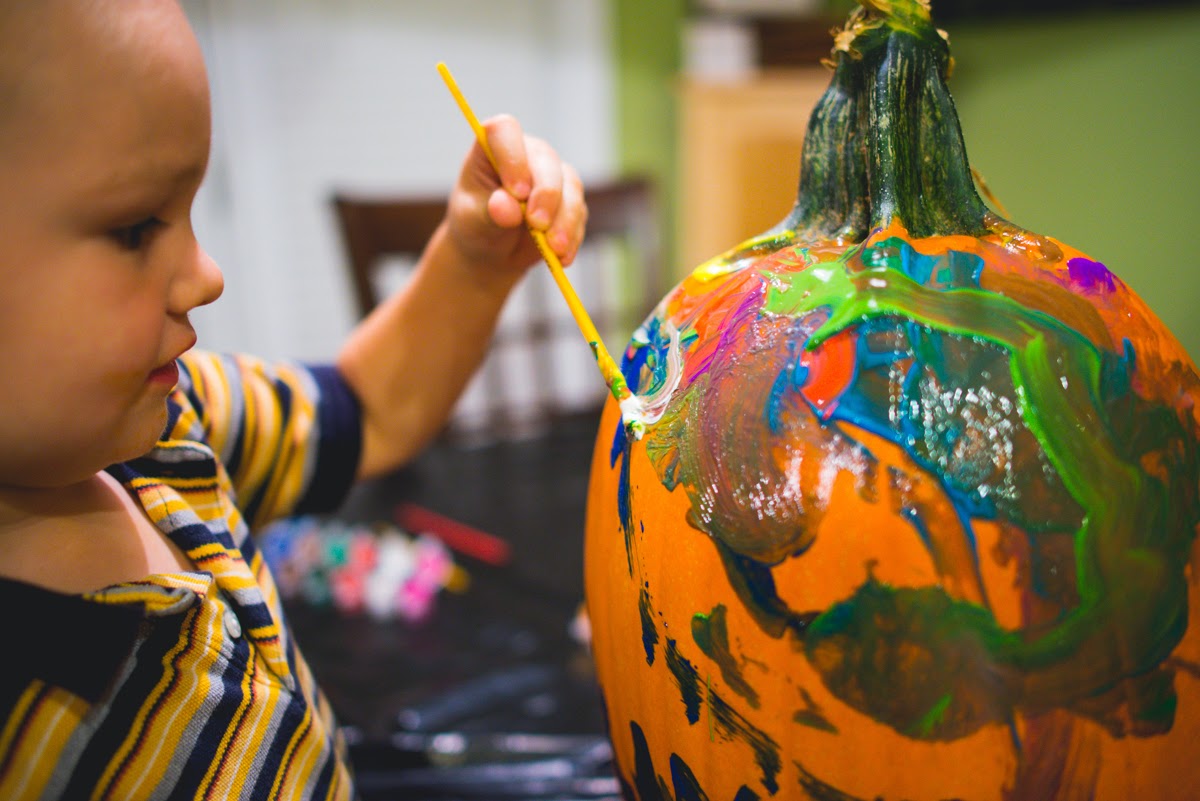 We did manage to write his name and make a hand print in all that mess. 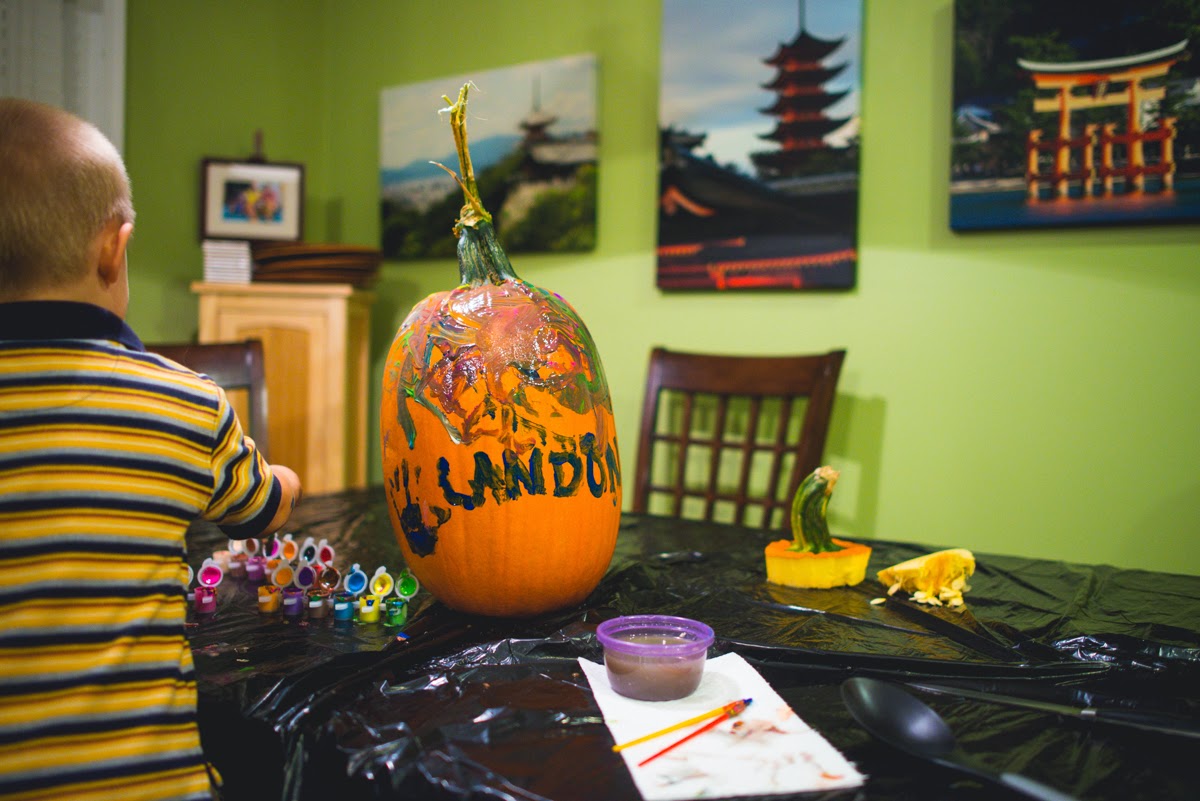 Poor kid doesn't stand much of a chance in the artistic department given his parents, but as long as he enjoys painting and coloring that is all that matters. He really loved this activity and is extremely proud of his pumpkin. 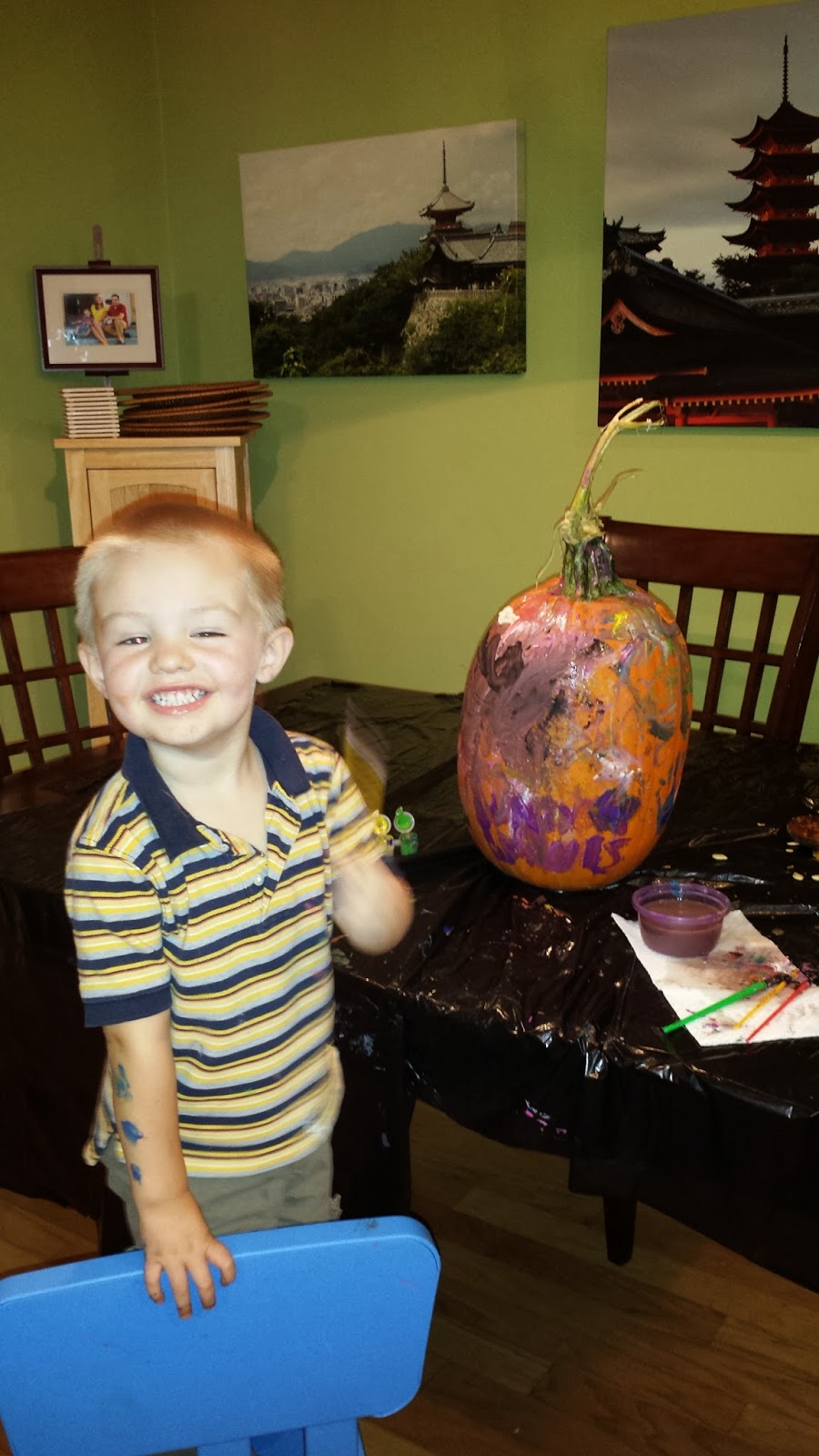 Adam didn't do half bad himself free handing this one. 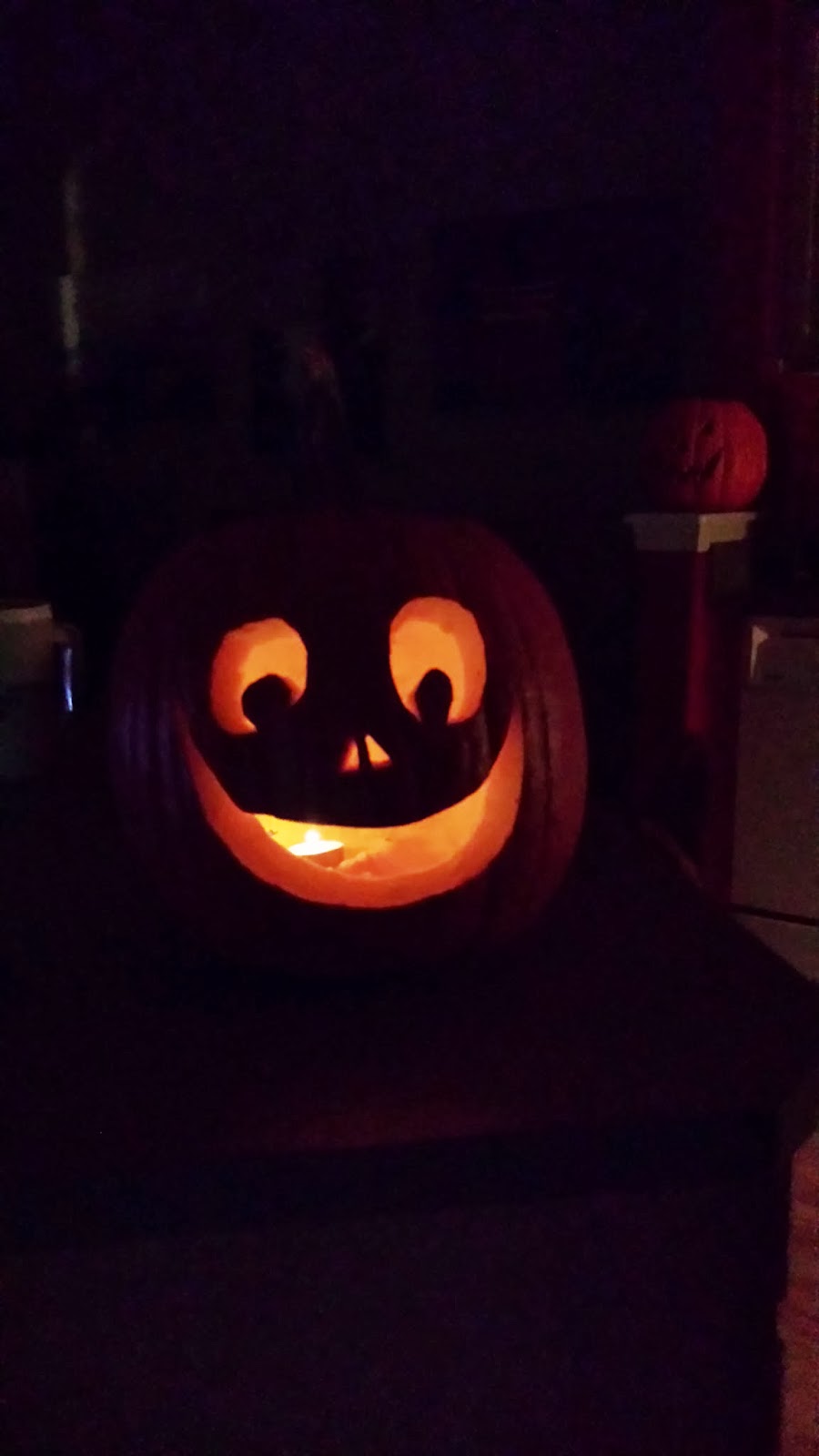 So next year we will be sure to pick our pumpkins a little earlier in the year and maybe the picking will be as big of a hit as the decorating. All the painting though has given me a Christmas gift idea for Landon, a painting easel. It might have to be an outside activity, but at his age it's something I think he would really enjoy. And Lord knows I need to start thinking of gift ideas since the holiday season has officially begun! Next stop, Landon's first year trick or treating.

If the pictures were not enough cuteness here's a little video I took of the boys working on their masterpieces.