This wasn’t my first time overseas by any means, but it was my first time overseas ALONE. There is a big difference. My company allowed me the opportunity to travel to Lisbon, Portugal for a few days for a business trip. While I can’t talk about my company on my blog (it is in the handbook) the trip was very little business that ended at the airport and allowed me two free days of sightseeing. As excited as I was for a free trip, the idea of traveling alone was intimidating. With the exception of my first trip overseas that I took with my family, I’ve always had the best travel companion, my husband. Over the years we’ve visited a number of amazing countries and we’ve always been a great travel team. I’ve always done the planning, we’ve coordinated the logistics together and he has always been the navigator. It’s worked great for us. So the idea of doing everything on my own wasn’t the most exciting prospect, but my love of travel outweighed any fears and I signed up.

Lisbon is a city. It isn't’t hard to reach or lacking of people and those are the things that made it the most intimidating to me as a solo traveler. The idea of being in a foreign city, trying to navigate the transit systems and find my way through the mobs of people all while ensuring my own safety is what caused me the most hesitation. On top of that, I’m a planner. I plan EVERY SINGLE detail of every trip. It’s something that I greatly enjoy, but for this trip I found out about the trip less than a week before leaving. As a matter of fact, I received the invite to go on Tuesday afternoon and was boarding a plane Friday morning. Normally for such a short trip I could have found time to plan within the three days notice, but last week was Thanksgiving and I spent exactly no time even thinking about Portugal until I started packing late Thursday night. A co-worker had given me the Rick Steve’s snapshot of Lisbon and another had given me a city map and recommended a good hotel and so I was ready to go.

Friday was a long day for me, as is any day of traveling overseas. I usually don’t mind the traveling part of the trip. The airport, the waiting, and the plane ride isn’t usually as torturous for me as it is some people. I have always been extremely lucky when it comes to traveling, but on this trip my luck ran out (My husband says its because I went without him...). My plane from Houston to Frankfurt was delayed over three hours. We started boarding late, they stopped boarding halfway through, and then once everyone was on board the captain notified us that the mechanics were working on the wing because it was missing some screws.  Once that was resolved he informed us that a plate was being changed out and after well over an hour on board he informed us that “a caution light wouldn’t turn off” so the mechanics were “investigating it further”. At that point they let everyone off the plane citing it would be another hour till take off. By now many people had missed their connections and some had decided to stay in Houston for different flights. Once we were all seated again the Captain informed us that they had to get the luggage of the travelers no longer on the flight off and we would take off momentarily. 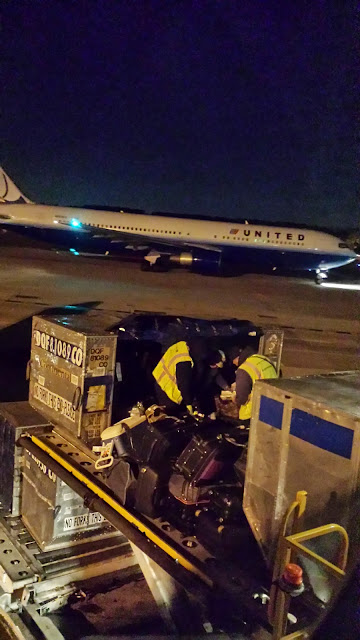 Over an hour later our wheels were still firmly planted on US soil. This delay, especially the long search for luggage, caused me to miss my connection from Frankfurt to Lisbon. Upon arrival in Frankfurt, I was rebooked for a 7pm flight. 7pm finally came around only to find out that once again we were delayed. It wasn’t until two hours later that I was finally headed for my destination. I arrived late in Lisbon only to learn that my luggage had not. After almost an hour of dealing with the luggage claim I was finally in a taxi headed to my hotel. Given that it was after 11pm, I decided not to bother fooling with the transit system and get a taxi cab instead. I gave the cabbie my address and about 10 minutes and 15 euro later I was dropped off at the hotel, the only problem was that it was the wrong hotel. The hotel shared the first name of the hotel that I had booked and not being clearly written on the outside I didn’t realize it wasn’t the correct hotel until the front desk informed me of such. A few minutes later a new taxi arrived and this time within 5 minutes and 10 euro less, arriving at around midnight, I was finally in my own room. Day over!

To say my travel experience wasn’t good was an understatement, but I was determined not to let things out of my control ruin this short trip. With my long day and night and day of travel I had been able to read the Lisbon travel book and plan my solo itinerary. After a shorts night sleep I woke up early Sunday to set out and make the most of my day. I spent the early morning hours following Rick’s recommended strolls through the neighborhoods of Lisbon. First up, was a wonderful view down on the city from a high perched park called the Miradouro de Sao Pedro de Alcantara. 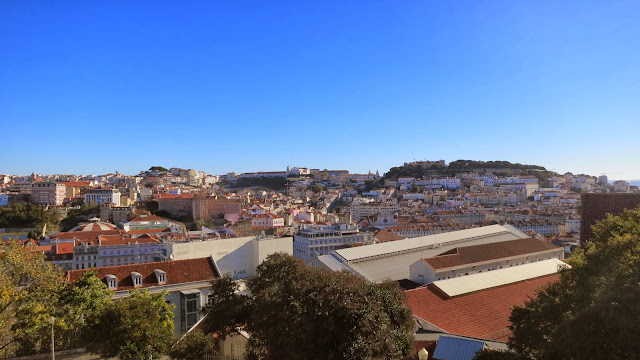 It was a perfect way to really see Lisbon for the first time and see where the city ended and the water began. There is always something extra beautiful about a city on the water and Lisbon is no exception. With Rick’s good directions I managed to follow his path and found myself at a beautiful church called Sao Roque. I’m not sure there is anything I love more than visiting the churches of Europe. From the grandest of the all, St. Peter’s, to the local parish church that my Grandmother and Great-grandparents attended in Croatia. There is something magical and spiritual in every single one. As was this church with a beautiful painted wooden ceiling that gave the effect of a domed roof, a masterpiece in its own right. 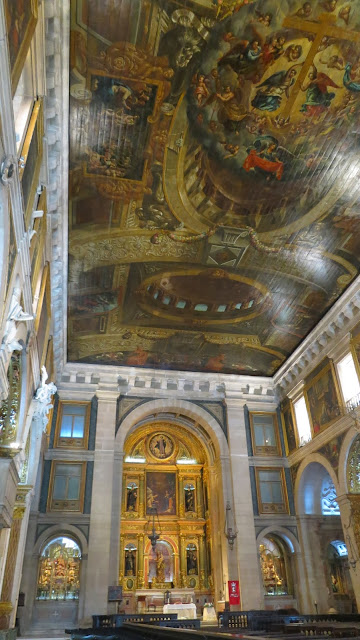 The vast morning light spilled in from the high windows and lit up the gold of the altar seemingly announcing the presence of God. After visiting the church I continued down the streets of Lisbon and into square after square of charm. Many of the buildings of Lisbon are decorated with colorful tiles and just walking the streets and admiring the colors is an enjoyable adventure. 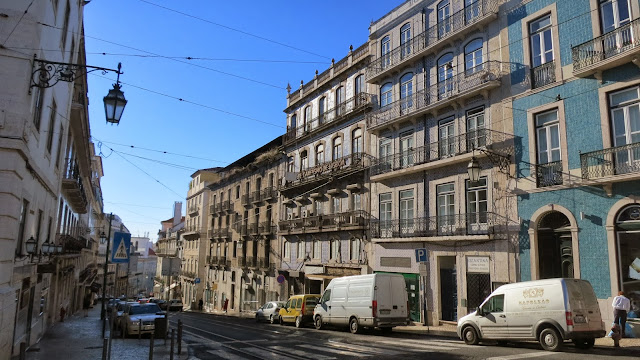 One such square contained the hallow outline of a church that was part of a larger convent. Most of the convent was destroyed during the great Earthquake of 1755 including the churches roof. That earthquake demolished most of the city killing thousands. The outline of the church was left as a reminder of the events that took place. 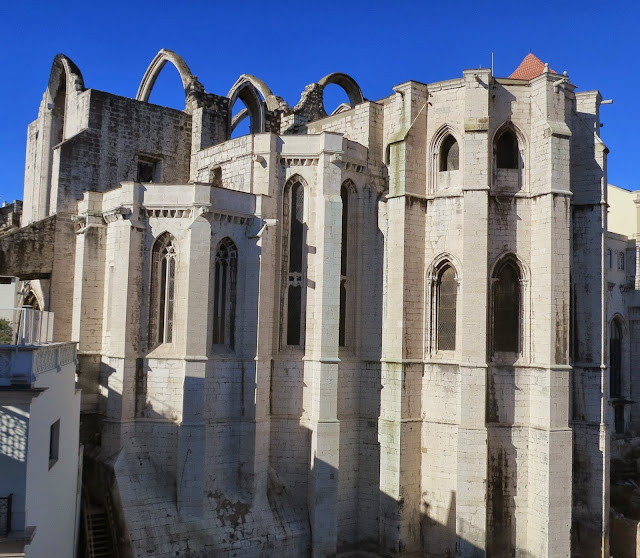 Afterwards, I took the trolley up to Sao Jorge Castle which offered more stunning views down on Lisbon and a sweeping look across the bay. Lisbon seems to have drawn on other cities for some of their landmarks which include a San Francisco bridge and a small Christ the Redeemer on the opposite side. 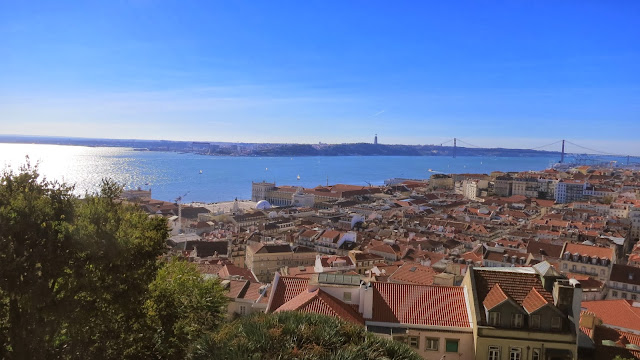 I thoroughly enjoyed the views, but found myself wishing I had someone to enjoy them with. Coming down from the castle I got lost which was frustrating as I knew that it would never happen with Adam by my side. I asked myself what would Adam do and came up with a plan to walk downhill toward the water until I found another trolley that I could hop on. I figured the lower I got the better my chances were to find a metro station as well. I probably spent a good hour lost and riding on trolleys until I finally had my bearings again. I decided to take a break and grab some lunch while I planned the second part of my day.

Only having two days in a place, and them being on a Sunday and Monday, wasn’t ideal. Many places within Lisbon are closed on Monday which meant that I had to pack a lot into Sunday. I was also cautious of it becoming dark and making sure I wasn’t out late by myself at night. Lisbon isn’t known for being the safest of cities and I didn’t want to be alone AND lost in a foreign place. I decided that despite the early closing times I would take the hour trip to Belem. Belem is only three miles outside of the city limits, but I knew with transportation and wait times I wouldn’t have long in Belem before the sights began closing. The major reason I wanted to visit Belem was to see the Monastery of Jeronimos. This monastery stretches 300yards and was built in the 1500’s as a thank you to early Portuguese explorers by the King. 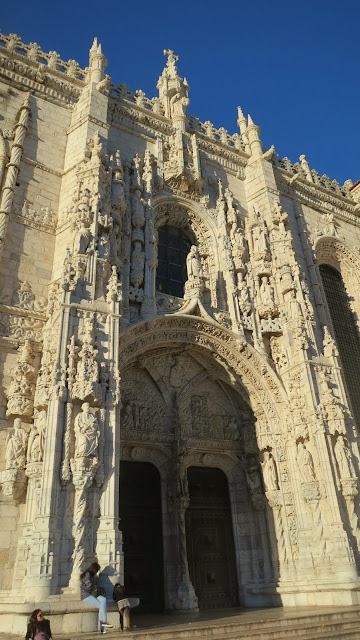 The monastery alone was worth the trip and time although all of Belem was highly enjoyable. Being a Sunday afternoon I arrived during evening Mass, but it wasn’t just any mass, it was an ordination mass. Since the church was packed to the brim I bought a ticket to tour the cloisters and museum. When I reached the second floor of the monastery I was greeted with an amazing surprise, the high choir and bird’s eye view of the mass taking place below. 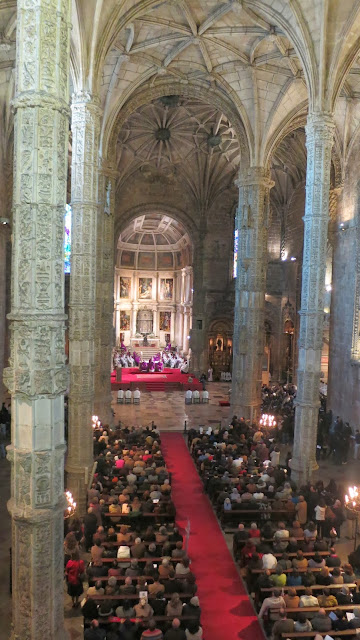 I’ve only had the privilege of attending ordination masses twice in my life and neither on this scale. Just like the Jesuit church of San Roque from earlier, the awe and presence of God was immediately felt. Knowing no Portuguese I am normally lost when others speak, but being Catholic and knowing Mass I could follow and respond in perfect unison as the parishioners prayed to the saints. It was the first time that day that I didn’t feel alone.

I spent a good amount time in the church and exploring the monastery. The cloisters were especially ornate and a peaceful area to enjoy. 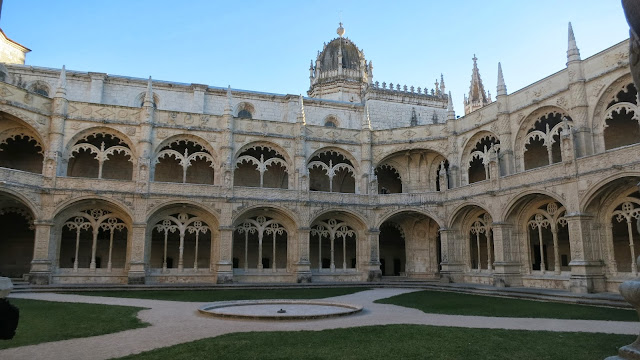 It was well worth the precious time it cost me and once I left it the sun was going down and the other sites were closed for the day. I spent the sunset walking around the waterfront in Belem. A spectacular monument sits at the edge of the water rightfully titled the Monument to the Discoveries and dusk was the perfect time of day to enjoy the area. 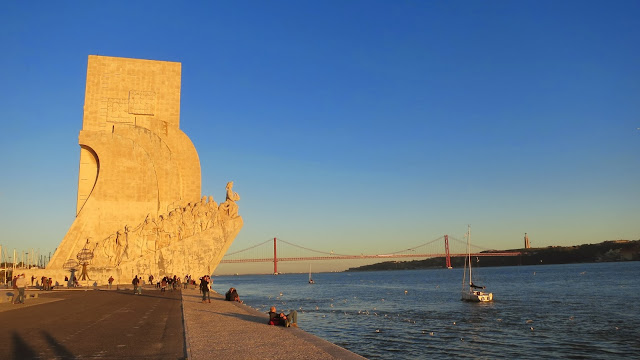 By the time the sun had set I decided it was time to go back into Lisbon and was able to meet a coworker for dinner. We met in an area we both were familiar with getting to, but found it to have very few places to eat. After walking around quite a bit we stumbled upon an American style dinner called the Great American Disaster. In Lisbon not everyone speaks English and despite having American in the title it seemed that no one in that dinner spoke any English. After fumbling our way through ordering we enjoyed great burgers and fries (a rare indulgence when I’m abroad). After getting on the Metro, saying goodbye, and going our respective directions, my first day in Lisbon was in the books.