Click HERE for the first part of my trip to Lisbon...


I woke up early the next morning and decided to spend the first half of my day in the nearby town of Sintra. Sintra is a UNESCO heritage sight and I’ve learned over the years that any place which receives that title is worth the visit. After getting off the metro I found myself lost and in search of the train station. For the first and only time on the trip I asked for directions. Something I’m quite proud of, not because I am too prideful to ask for help, but because there were few times I wasn’t able to figure it out on my own. In this situation, time was my motivator and after some help I was aboard the train to Sintra. As soon as I arrived in Sintra, I knew I had made the right decision. I can say that Sintra alone is the reason I will one day be going back to Portugal. As I’ve traveled over the years I’ve evolved as a traveler and large European cities don’t hold the same charm that they did when I was younger. Now I find more charm and magic in out-of-the-way villages where hidden gems reside. Sintra was quite the gem. With more than three palaces to explore, I decided to spend my time at the Pena Palace. Perched precariously at the very top of the hill town, Pena is as colorful as it is awe-inspiring. 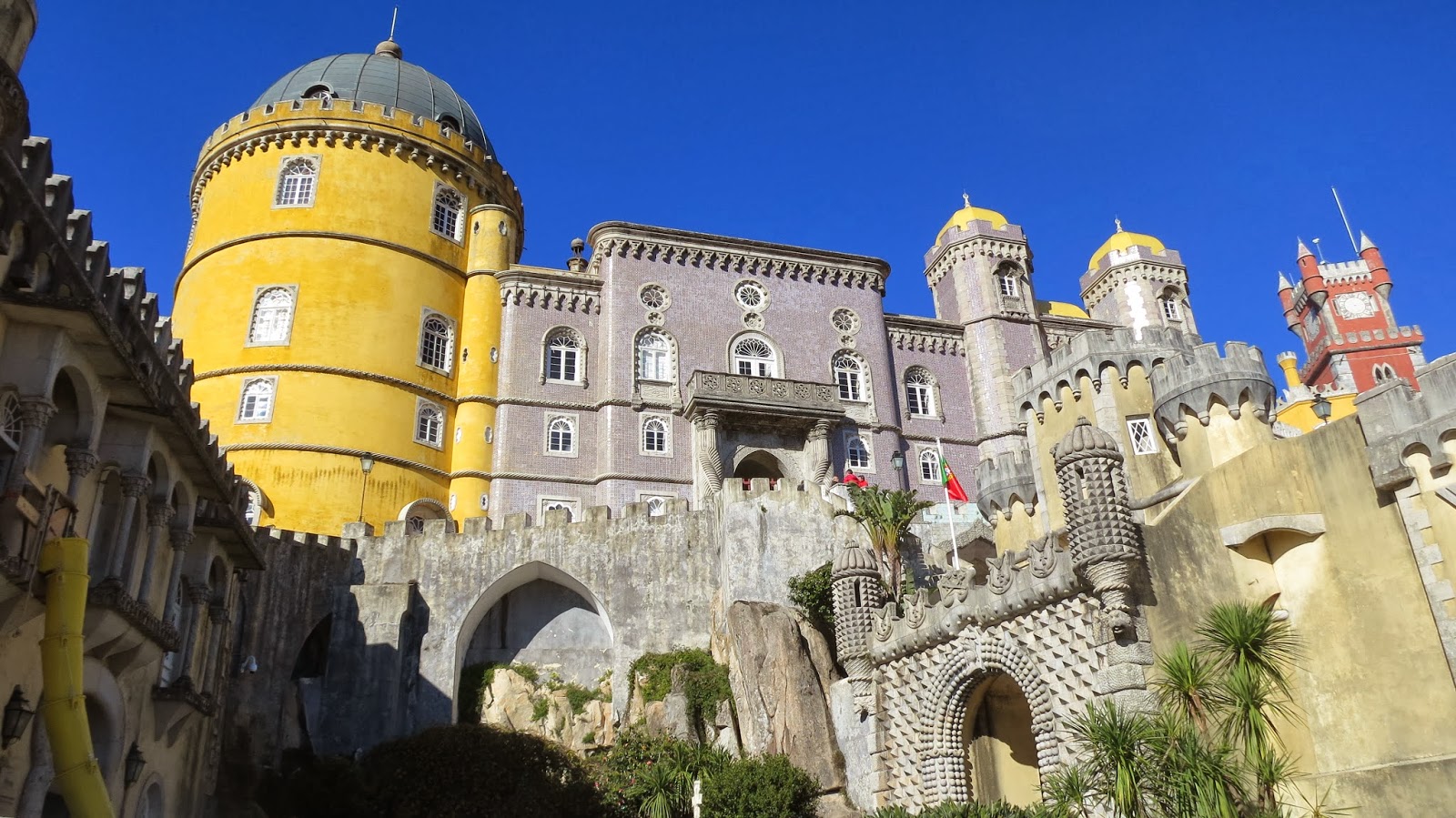 Despite its more recent roots than the other palaces in town, dating back only to the 19th century, Sintra feels magical and untouched by tourist. 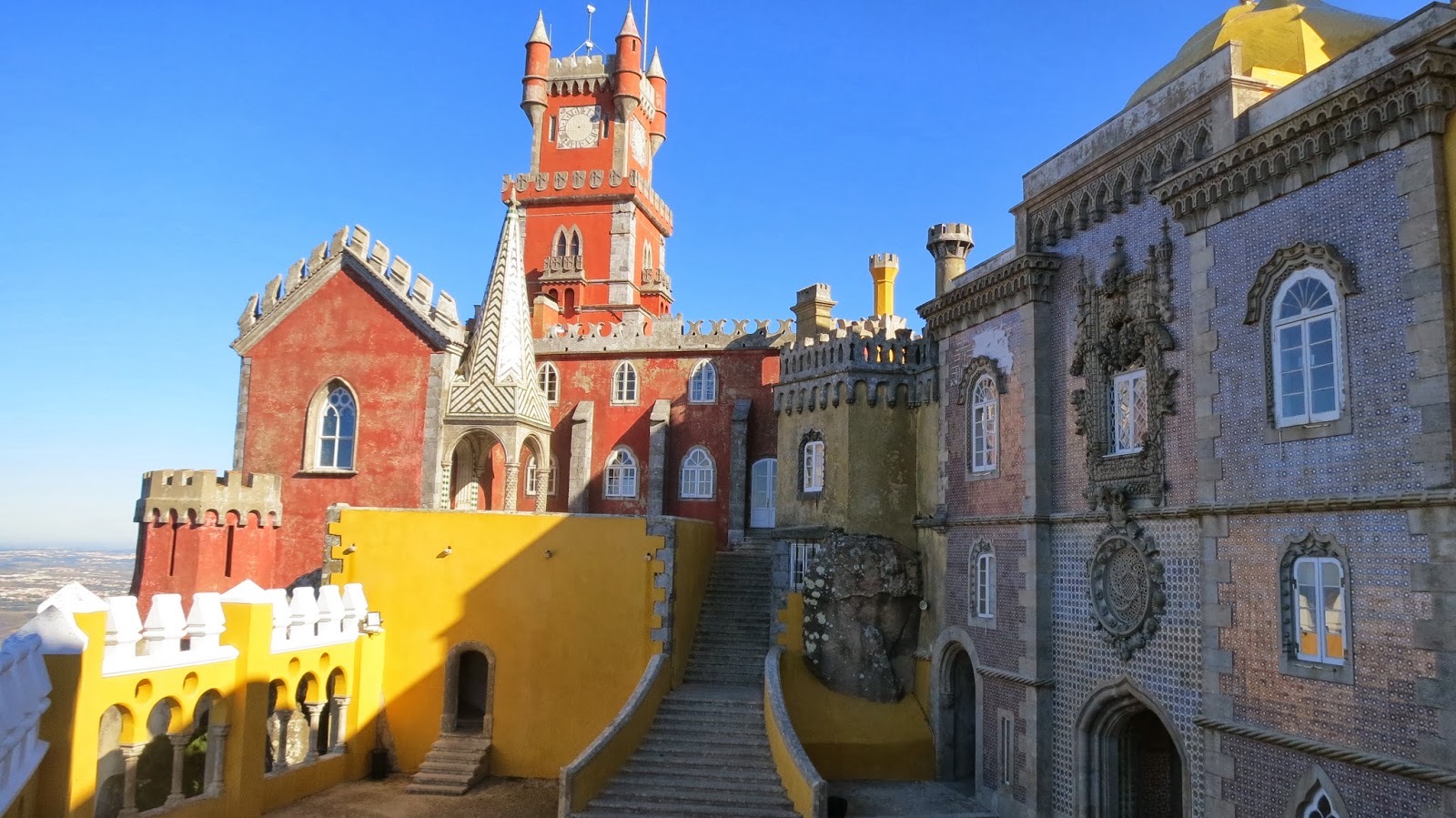 The cloister is an elegant sanctuary in the midst of the maze. 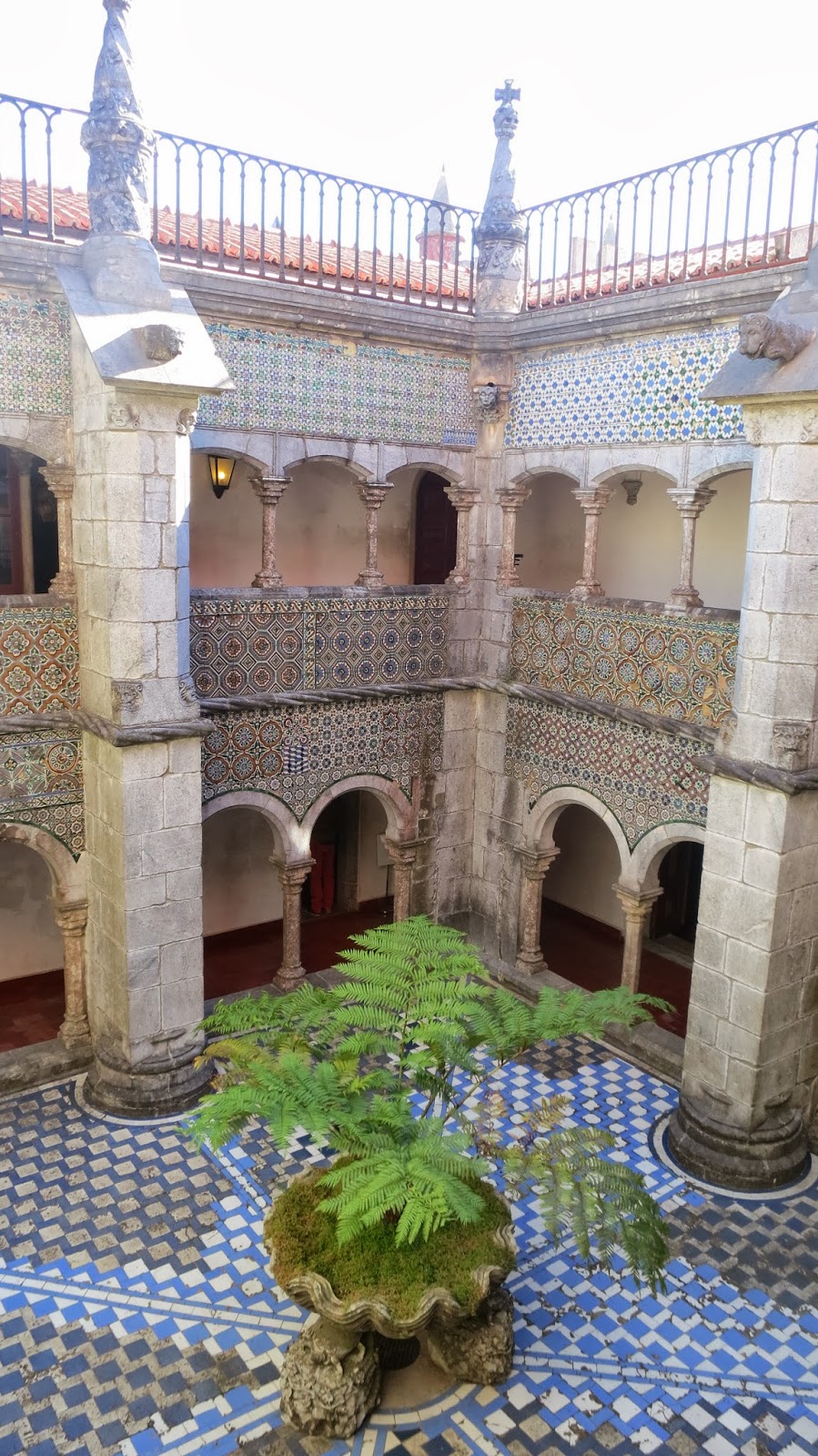 The rooms are decorated simply with different themes yet each room is stunning in its own right. Rooms range from elaborate furniture, to start of the art bathrooms, painted ceilings and muraled walls. No single room is too busy or has too much to take in at once, but I found myself wanting to linger in all of them. 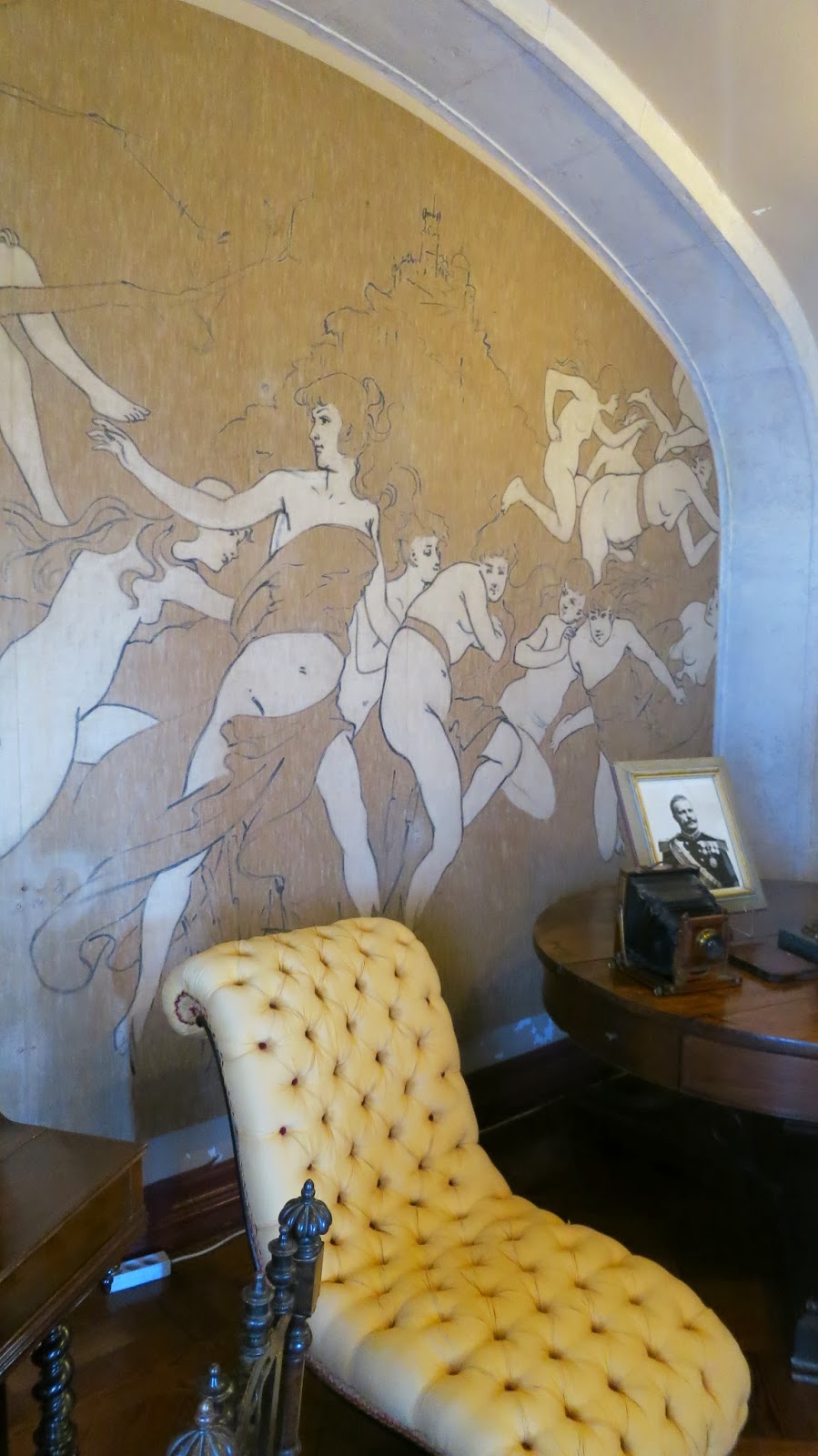 There is even an entire room of paper-mache furniture meant soley for enjoyment of the King’s eye. 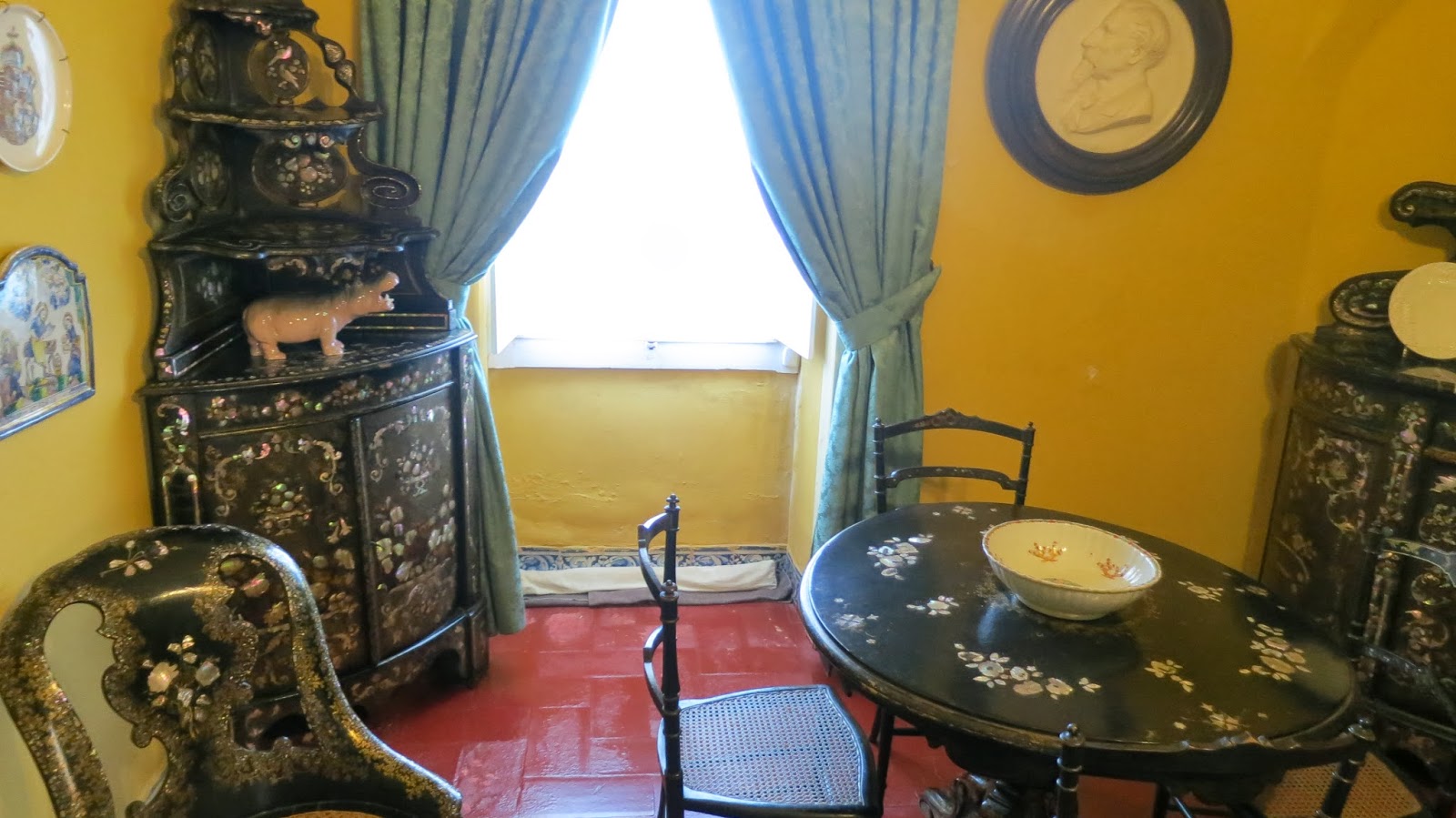 The views looking down on the thousand year old Moorish castle ruins, the village in Sintra, out to the sea and as far as Lisbon itself could be enjoyed for hours on end. 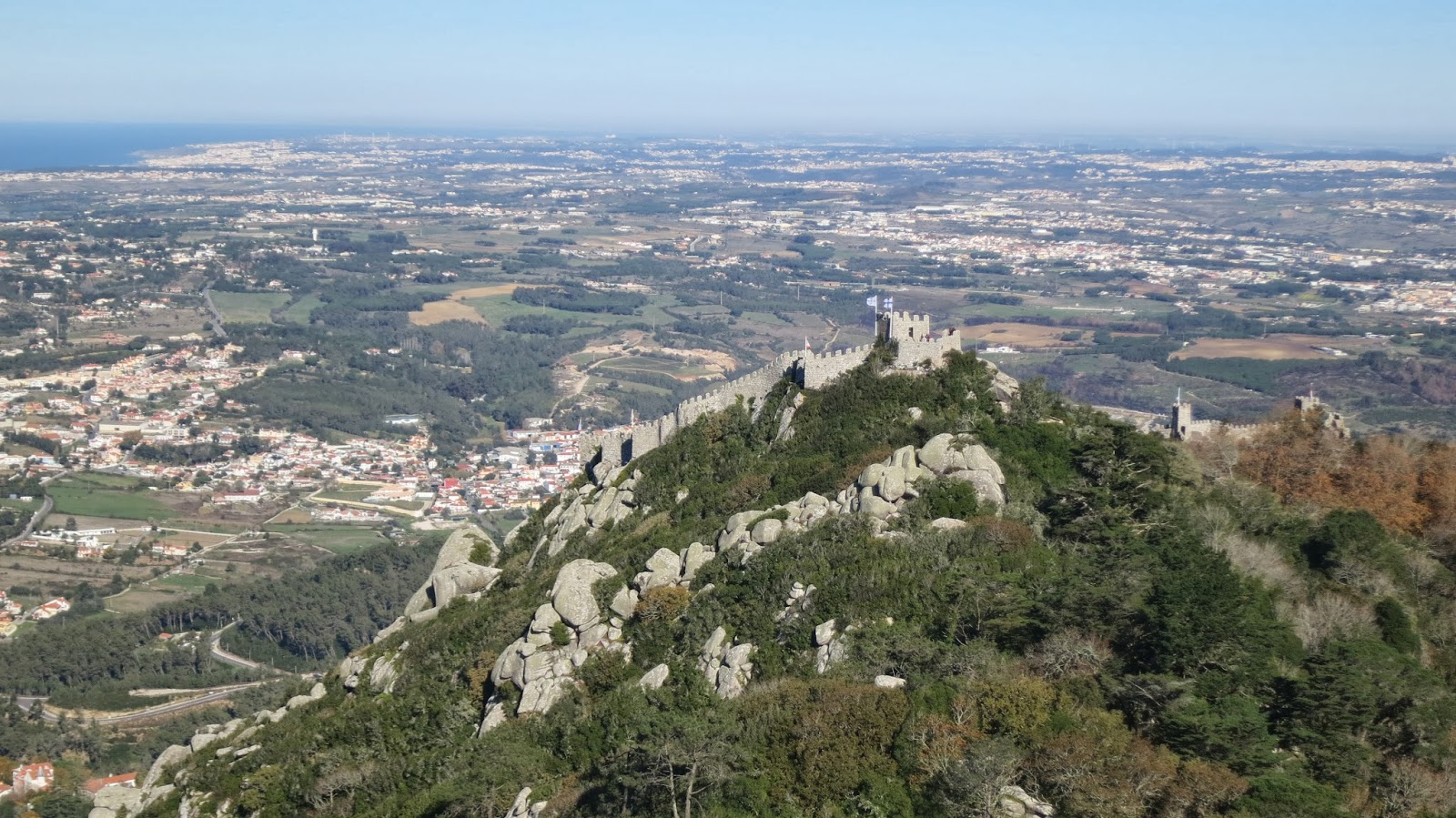 I did just that. Walking around the castle at a turtles pace and enjoying a late breakfast on the café terrace. Pena Palace is the castle I’ve always dreamed of visiting. It feels more alive than Windsor itself and more exotic than those in Japan. 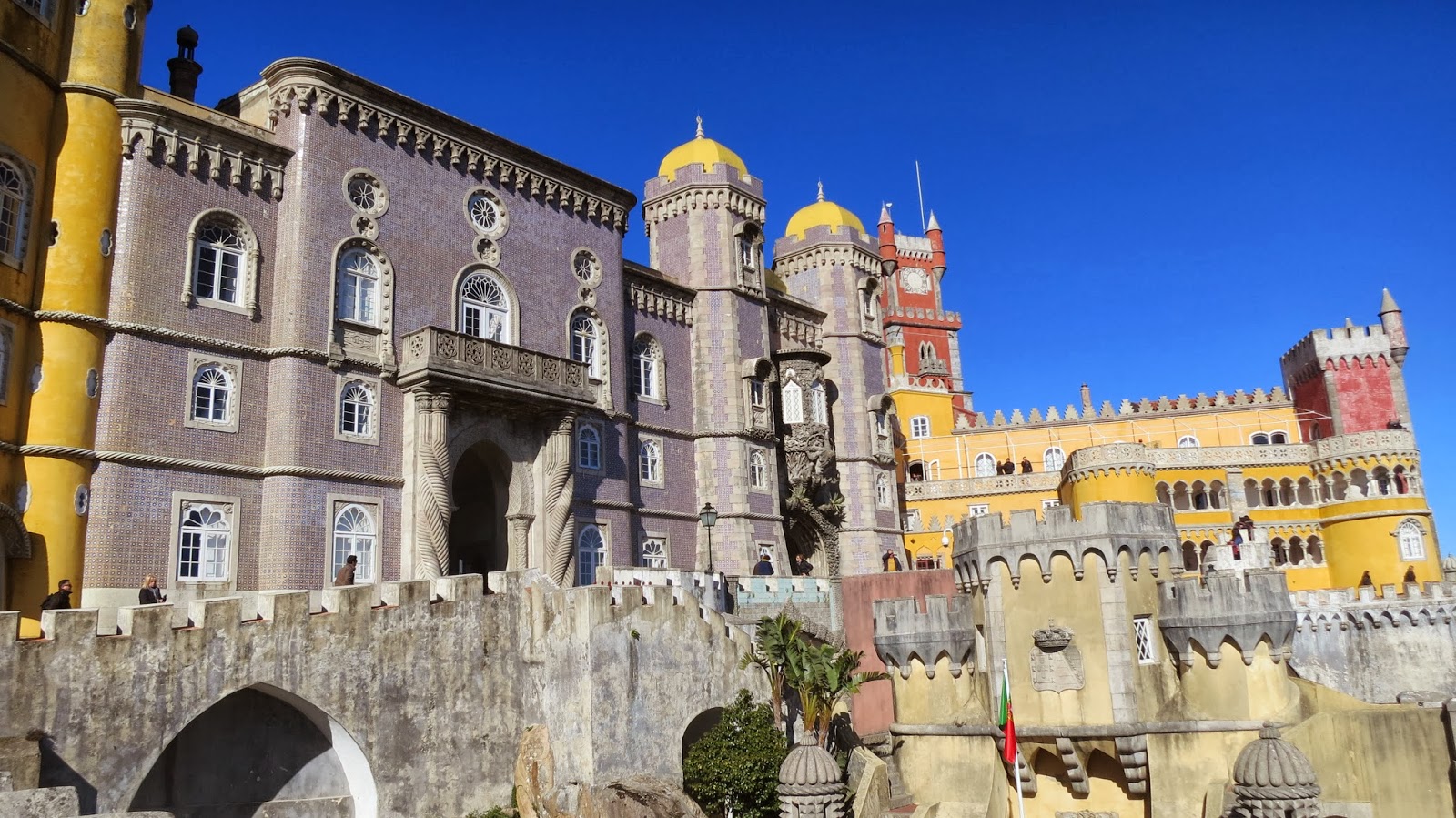 Next time I’m in Portugal, and there will be a next time, I will be sure to allow more time for Sintra including another visit to the enchanting Pena Place. The town of Sintra is charming as well with houses dotted up and down the hillside and an enchanting forest taking you there. In an effort to make the most of last few hours I decided to leave Sintra after Pena and travel back into the city. Given more time I would have loved to explore the ruins of the Moorish Castle and gone to Caboda Roca, the most Western edge of Europe. Had I not been alone and cognizant of daylight slipping away, I probably would have stayed out in the city all night, but there will always be a next time and there were parts of the city I had yet to see.

Arriving back in Lisbon I finished the last of Rick’s walks which started at the old palace square now called the trade square where ships would dock and sell their goods. A large statue of King Jose I marks the middle of the square and Lisbon’s own Arch of Triumph leads the way down the Rua Augusta with many shops and restaurants. 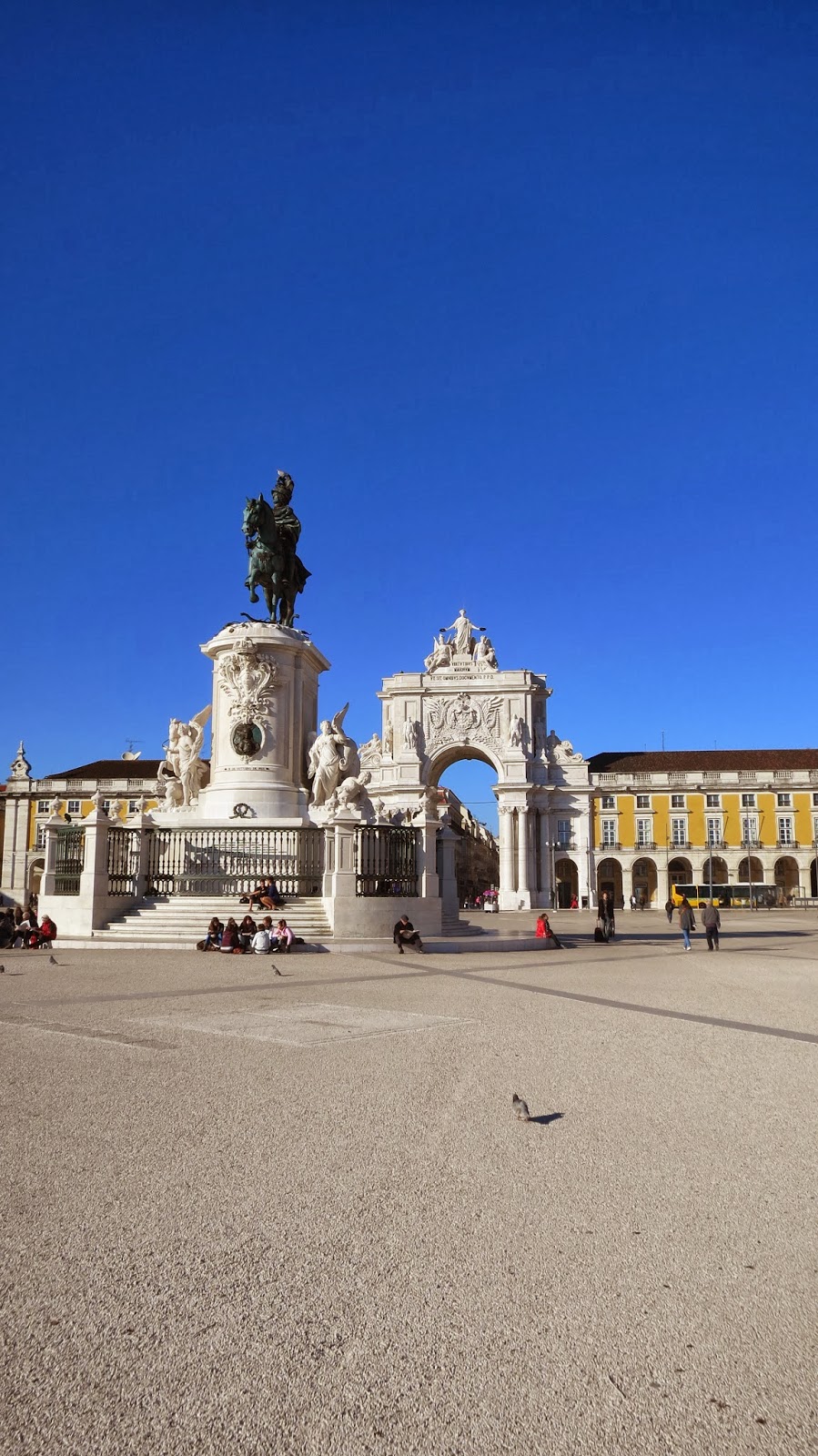 I enjoyed walking the street and seeing the vendors. Popular this time of year are roasted Chestnuts. Vendors roast them on site in their cart with a small wooden fire. All I could think as I passed them was how much my Dad would love them. 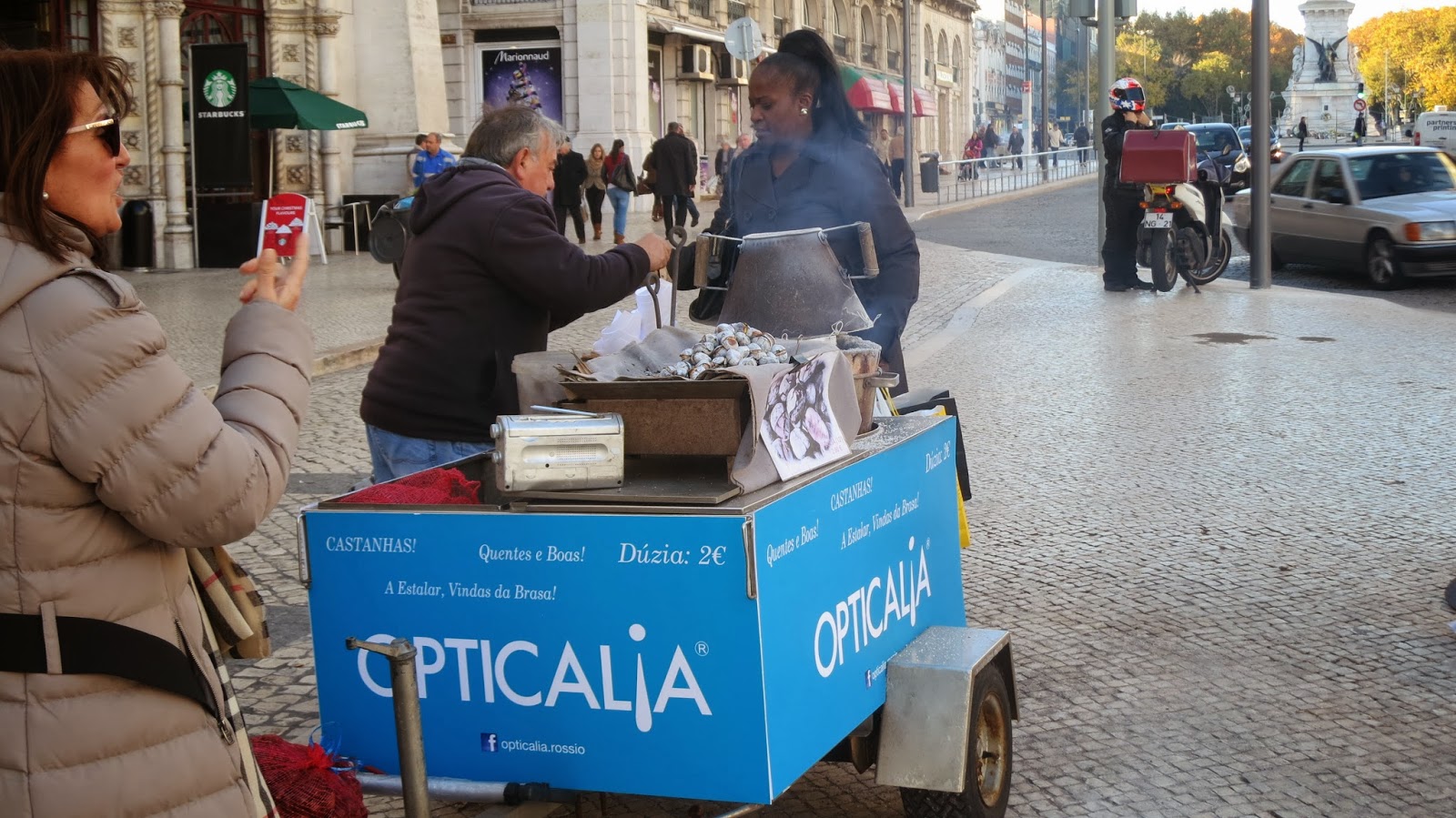 I mixed a little shopping with the walk and bought a few things for people along the way.  Part of the walk included the church of San Domingos. Unassuming on the outside this church was left partially standing after the Earthquake of 1755 and was rebuilt on top of the remaining structure. 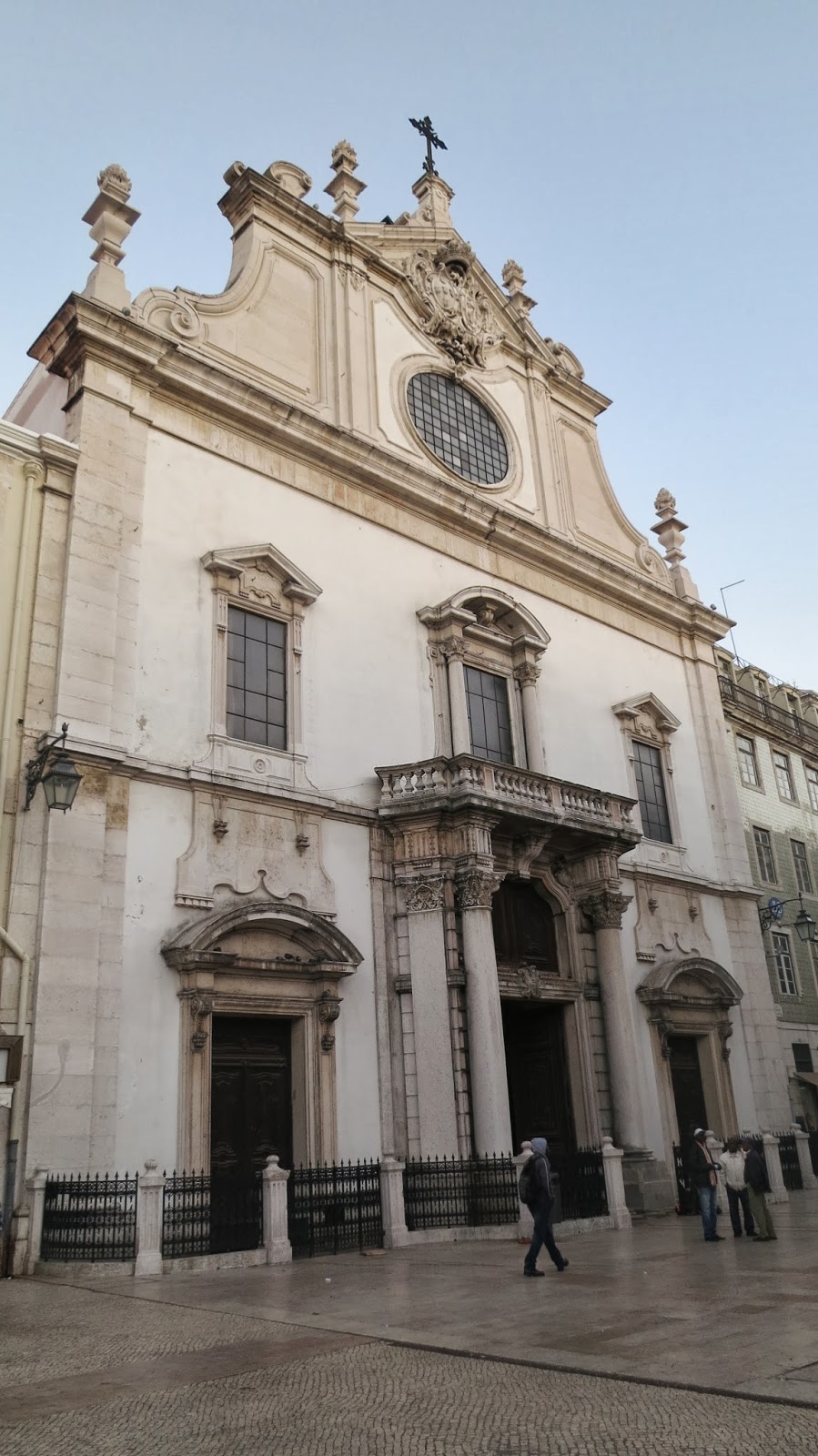 You can easily make out where the old structure ends and the new one begins. I was not excepting the emotion that I would feel upon entering that church. I assume it is similar to the emotion one feels when visiting Auschwitz or Ground Zero. The Earthquake of 1755 happened on All Saints Day, a Sunday morning around 9:40 am when most of the city was in church and halfway through mass. Most of the citizens were found buried under the rubble of the churches and more than 1/3 of the population perished that day. As I sat in the seat looking up at the enormous ceilings I could imagine the terror that the congregation must have felt as the world collapsed upon them. Of all churches that I have ever visited, this church, with its lack of painted walls or ceilings, tells the greatest story. It takes your breath away in a way that is different than the grand churches of Rome and called for silence in a show of different respect. It was a humbling experience to be inside its walls. 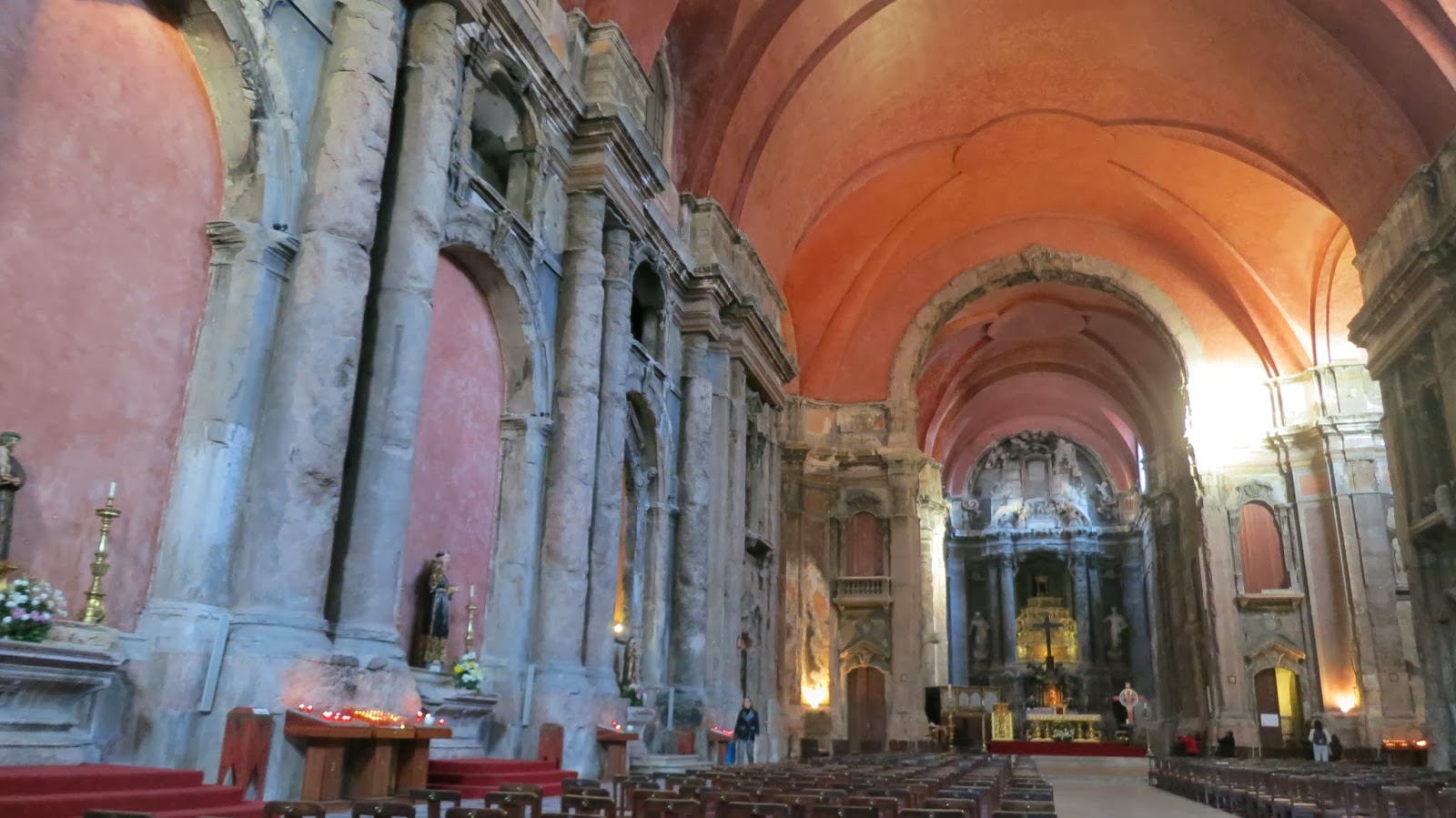 In the same square as the church was a famous Ginjinha bar. A tiny little hole in the wall about six feet deep lined with bottles of Ginjinha, a small wooden bar and two men pouring shots of Ginjinha for 1.50 apiece. Ginjinha is the famous drink of the area made from Ginja berries and is considered a sweet grappa better than all others. I had to try it and after walking past it twice I finally got up the nerve to order myself a shot. 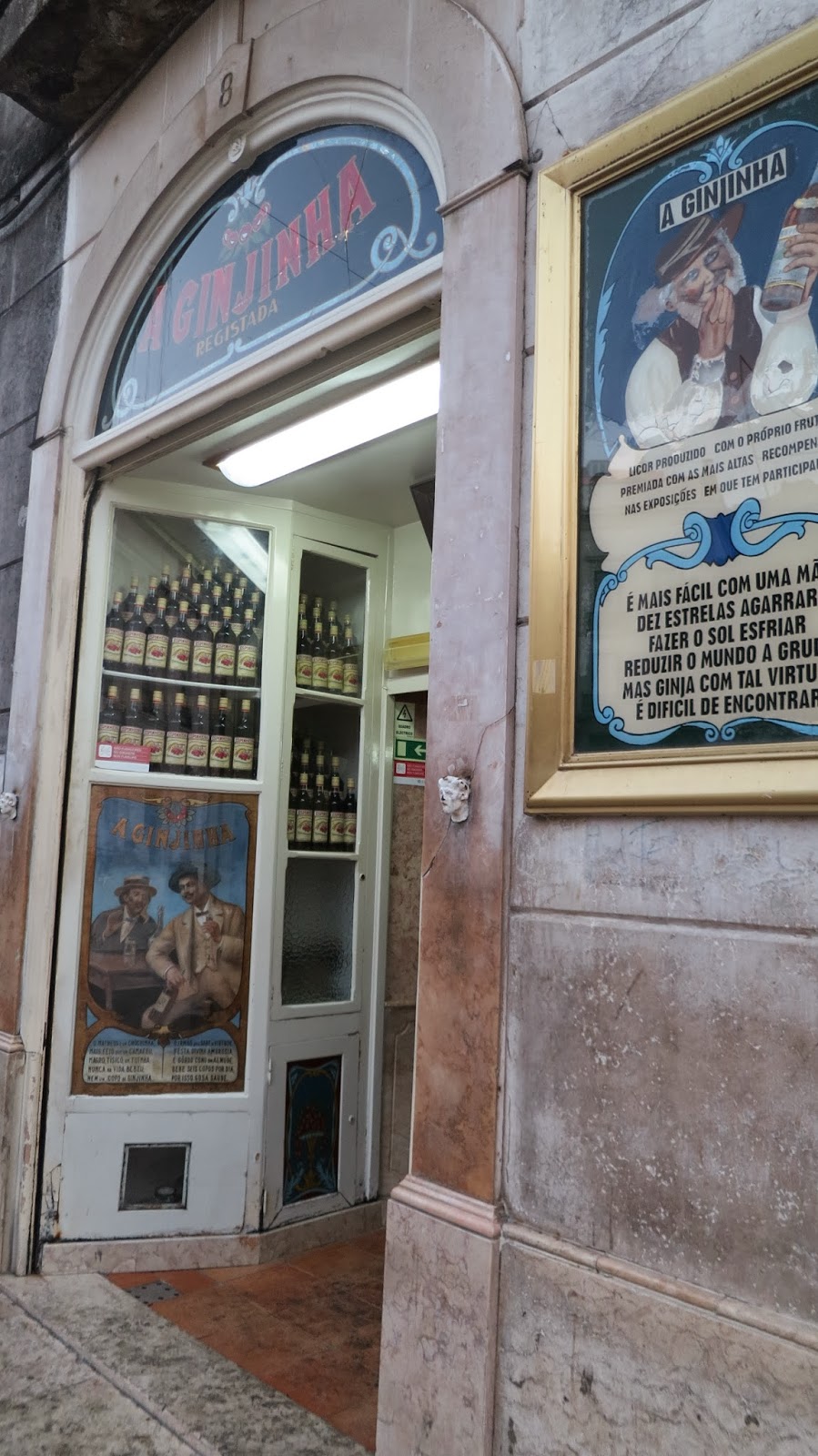 As to be expected, it pretty much tasted like cough syrup and although it may have rude, I decided against eating the two berries that came in the bottom. At least now I can say I know what Ginjinha is. I continued walking around the area and exploring each little square narrated by Rick Steves. Not being with Adam on this trip, I thought I would be able to spare myself of McDonalds, but when I passed one for the first time in two days, hunger, time, and my lack of enthusiasm about eating at a restaurant alone won over and so I continued with Adam’s tradition of eating McDonalds abroad.

McDonald’s happened to be in an area that I had been before and I made my way back to the city top terrace were I had started off my first day. I was looking for an artist I had seen the day before selling his artwork. A local painting of the city always catches my eye as a great souvenir. It’s great to walk past the painting every day in your house and even years later be reminded of the magical places you were. Since I knew I wouldn’t have to fight with Adam’s photography of Lisbon for wall space I bought a beautiful color triptych to add to our wall. I also got one last view of Lisbon just as the sun was setting. 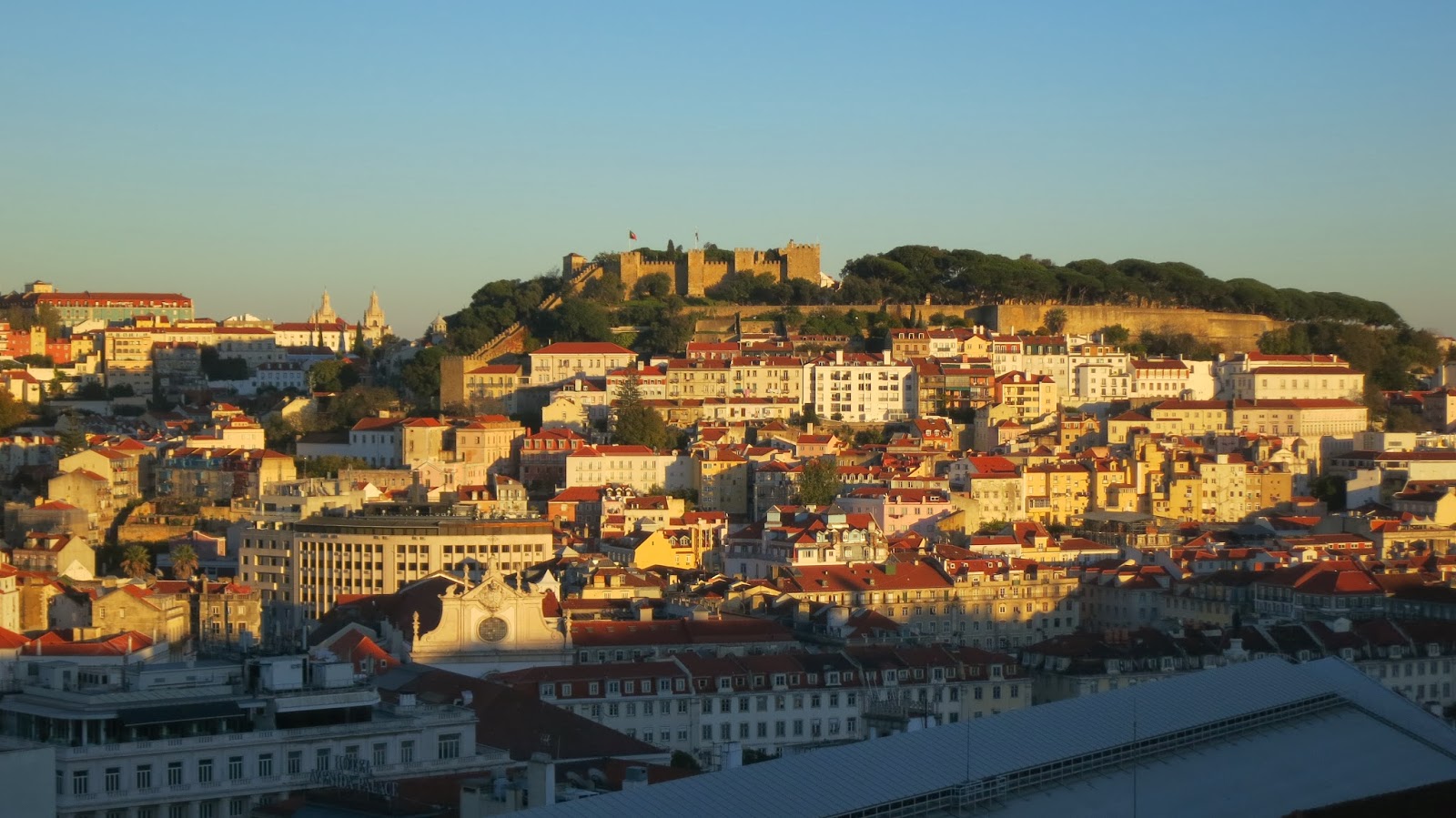 As I headed back down the hill my hands full of bags and the streets growing more and more crowded with people, darkness closed in and I decided it was best to head back to my hotel and call it a night.

My trip to Lisbon would have been better if Adam had been along. I would have seen more, probably never gotten lost, and enjoyed his company tremendously. Had I not missed my connection and arrived in Lisbon earlier I would have had more time and been able to see a little more of each place as well. That being said, I enjoyed the short trip tremendously. I’m proud of myself for getting around and faring fine on my own in a foreign land. The opportunity to see new places and have new experiences was worth the loneliness for a few days. If anything, Lisbon only made my love and appreciation for traveling that much stronger and I look forward to visiting again in the future with Adam by my side. 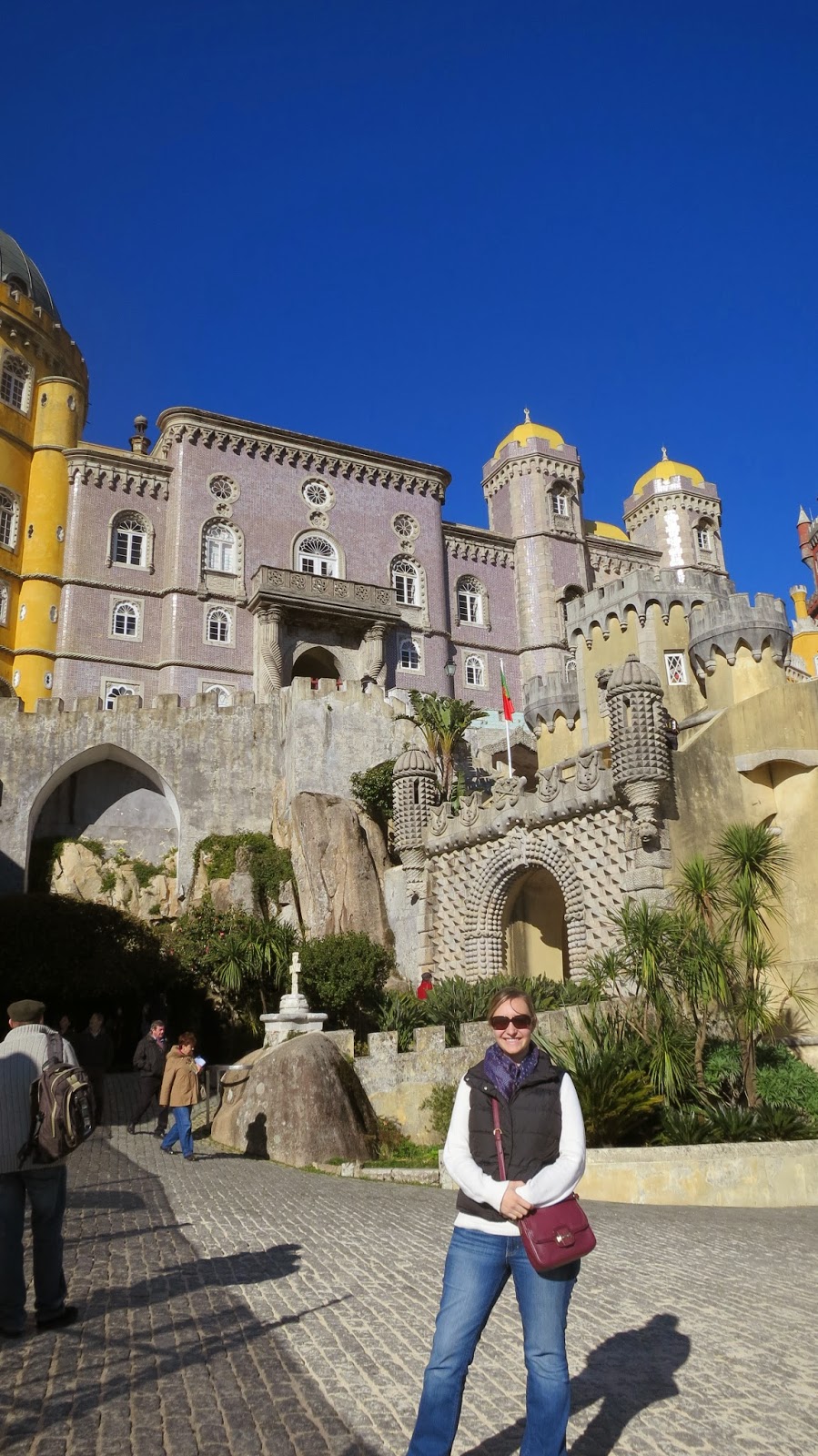