I posted HERE about the weekend before Christmas, which kicked off our Christmas celebration.
This post is all about those two days... 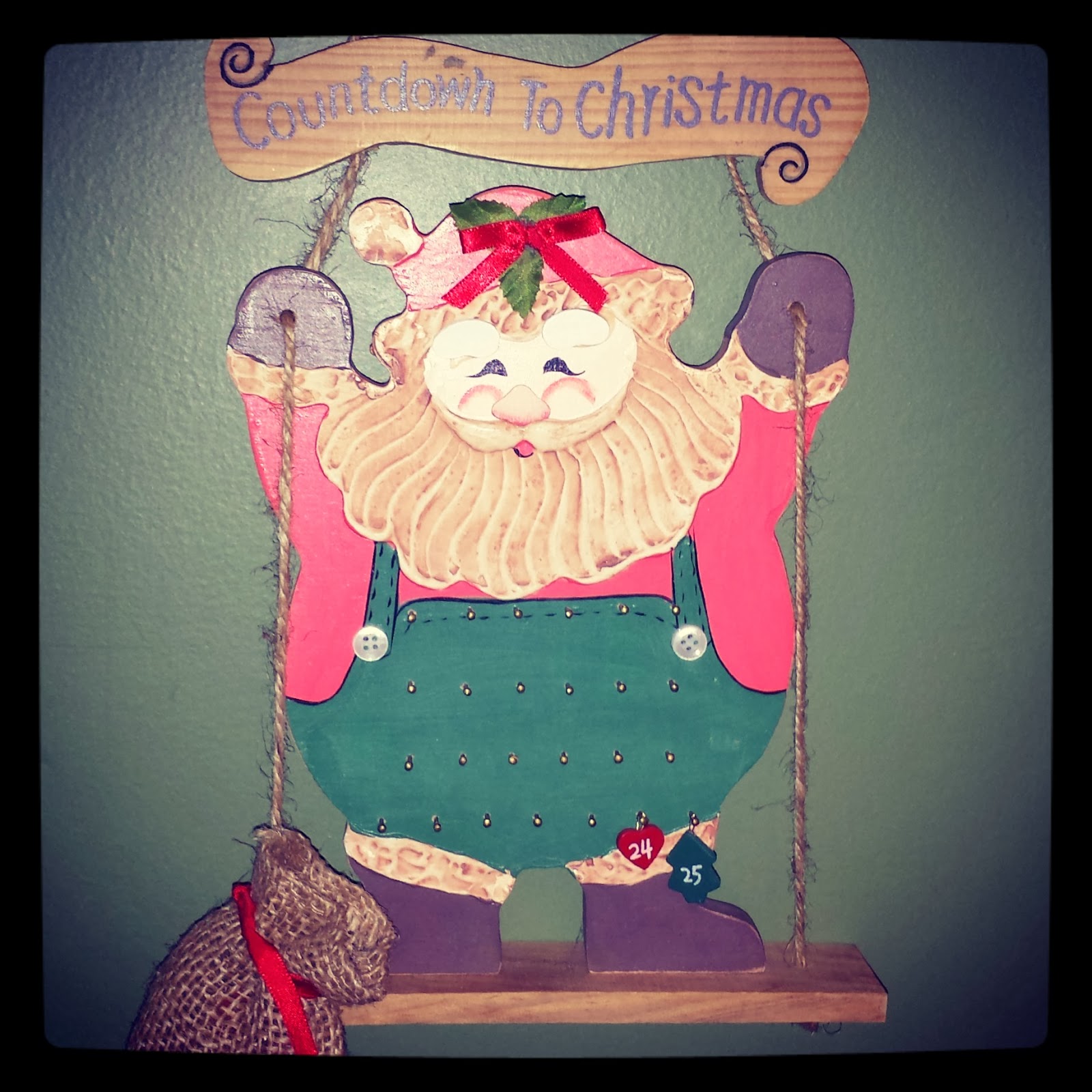 When you're a kid, there is nothing more exciting than Christmas morning. The anticipation leading up to that morning is incredible. As I've gotten older, that anticipation has come back for me, but at a different time during Christmas. Now it comes every year at Christmas Eve. For me, the most exciting part of Christmas is Midnight Mass. I can honestly say that I look more forward to Midnight Mass than any other event during the year. I remember when it really became special for me. Having been to Christmas Eve masses growing up with my Father, I knew what to expect when Adam and I decided to go to our first Midnight Mass as members of the Cathedral in Louisville. The Cathedral had an amazing choir and beautiful organ so we decided to attend the choir's Christmas performance before mass. It was a fantastic performance, as expected, and the organ brought the Christmas music to life. Just before midnight, when Mass was set to begin, the lights were dimmed for the last song. Silent Night was sung by the choir and entire congregation without any accompanying instruments. There are no words that can possibly describe the feeling in that church as we all sung Silent Night. Mass started immediately afterwards and from then on it was all magical for me. Midnight Mass is the most special part of Christmas for me and the most moving Mass year in and out.

This year I had to work half of a day. Since I'd be cooking on Christmas, we decided to eat out for Christmas Eve. We had dinner at O Charley's, came home, and put Landon to bed just before 8pm (his normal bedtime). At 10:30 we woke him up and got him dressed in his Christmas outfit. He wasn't super happy about putting on his Christmas outfit as he wanted to wear his car pajamas to church. 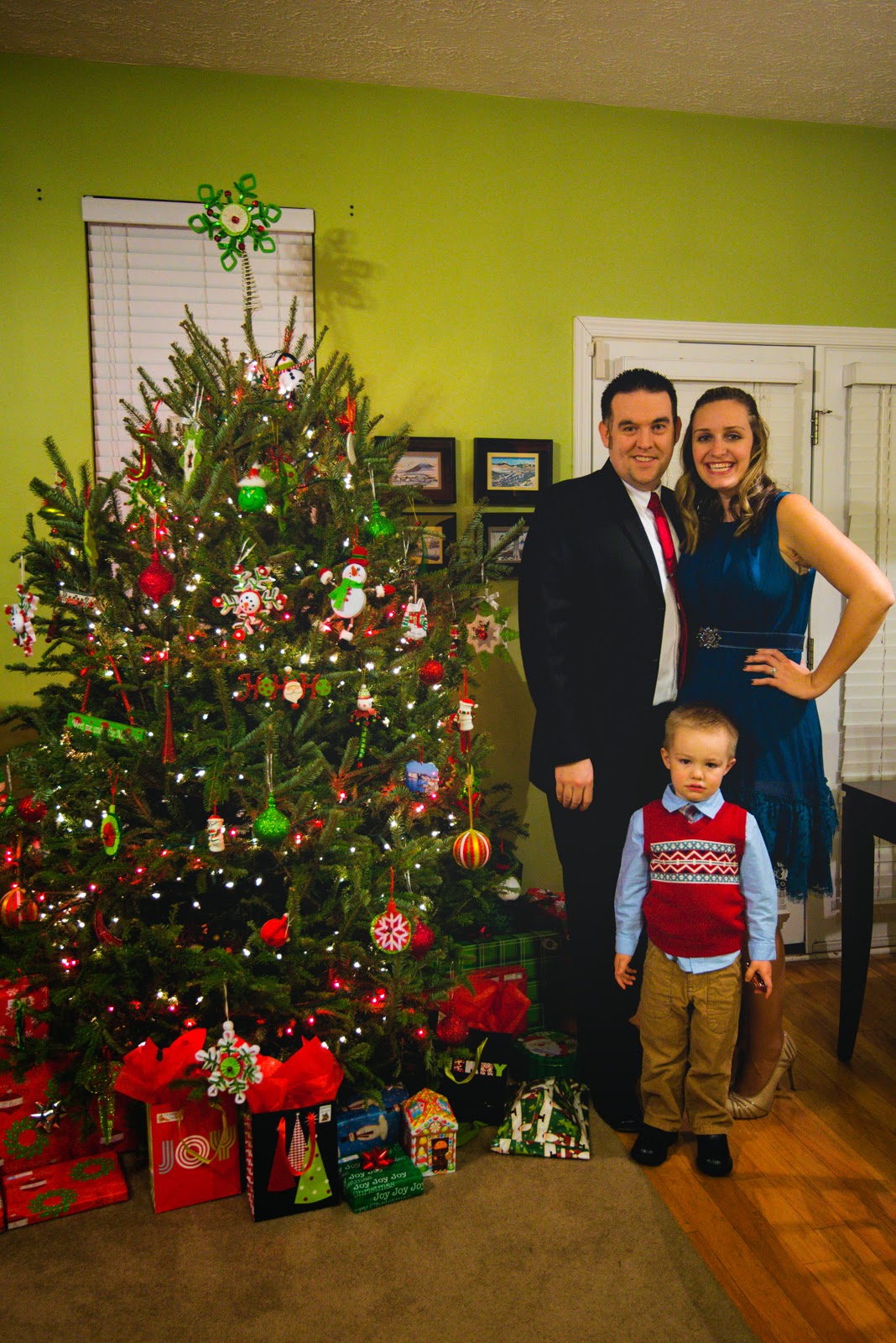 We may have had to bribe him with a cookie to try and get a smile. 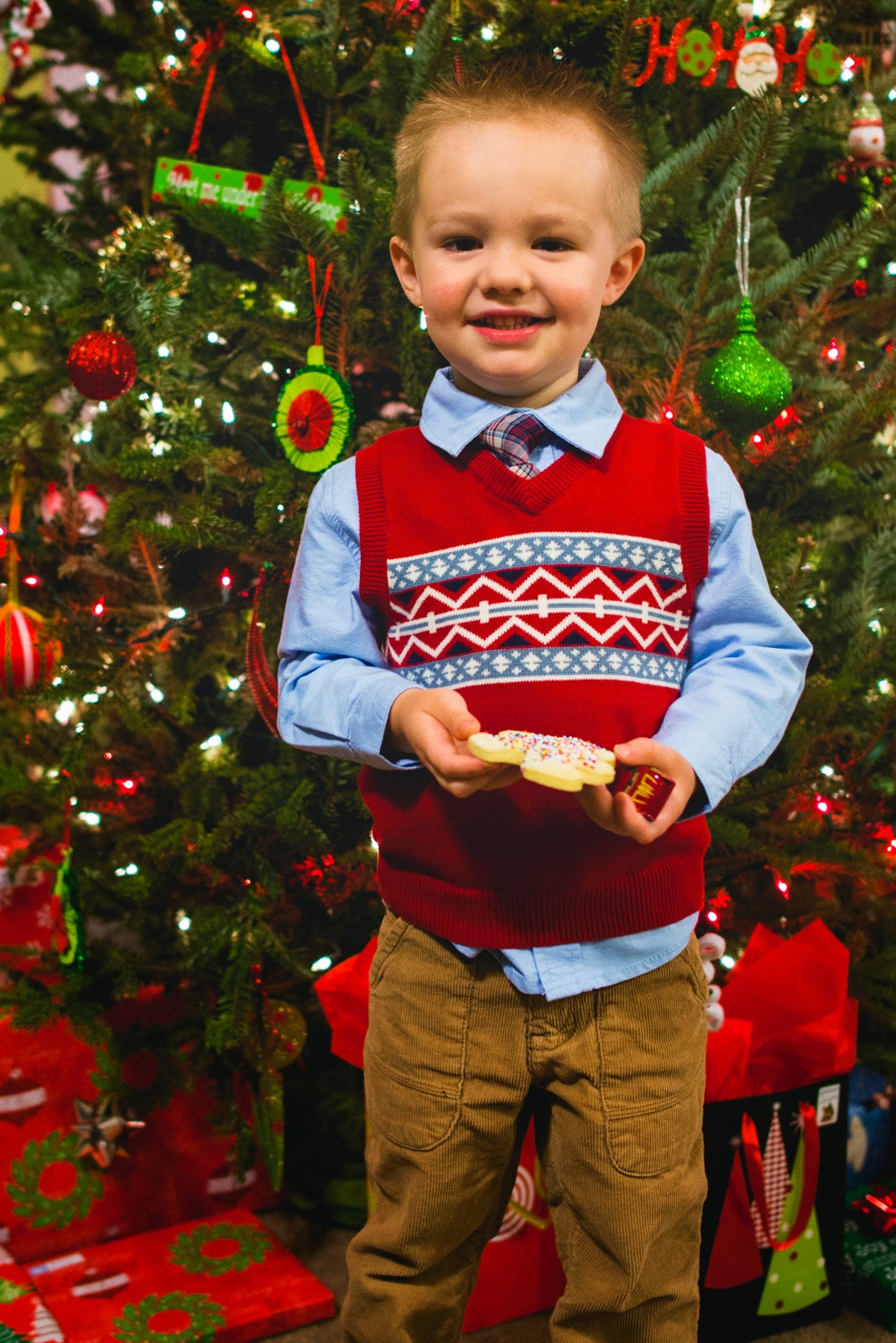 We went to Mass at the Nashville Cathedral which is a really beautiful church. Like always, we arrived at 11pm for the choir performance which included an orchestra. 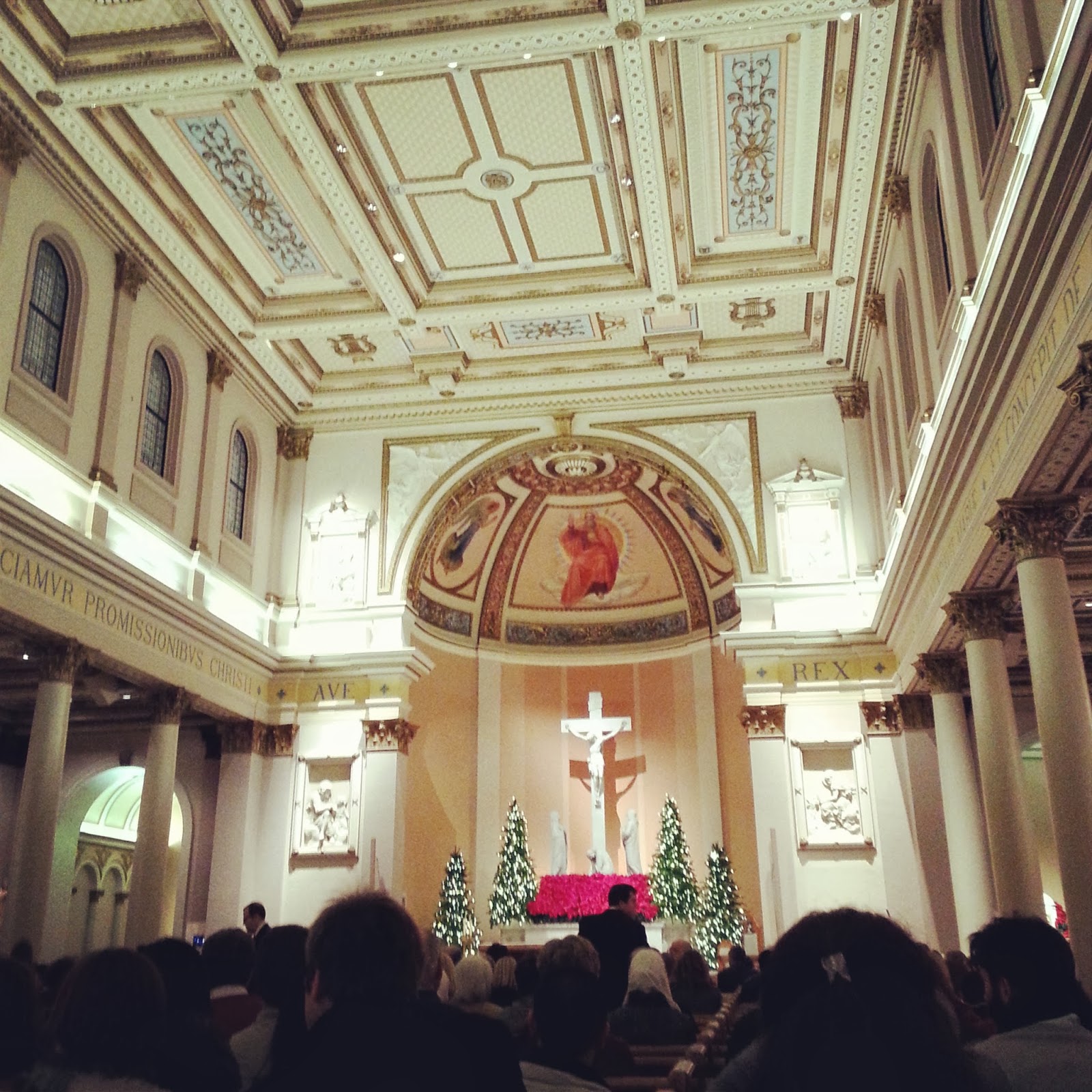 If I'm honest, having a squirmy little two year old with us at Midnight Mass takes away from the experience in some ways. We were constantly correcting Landon to sit on his butt and to not talk. Maybe we are a little strict, but it's important for us that Landon can sit still and be respectful during church. Overall, he did really well considering it was the middle of the night and we made him sit still for over two hours. It was a wonderful Mass and I'm glad we went. We will always go to Midnight Mass and I'm already looking forward to next year's. Hopefully, as Landon gets older he can find his own magic in the Mass. 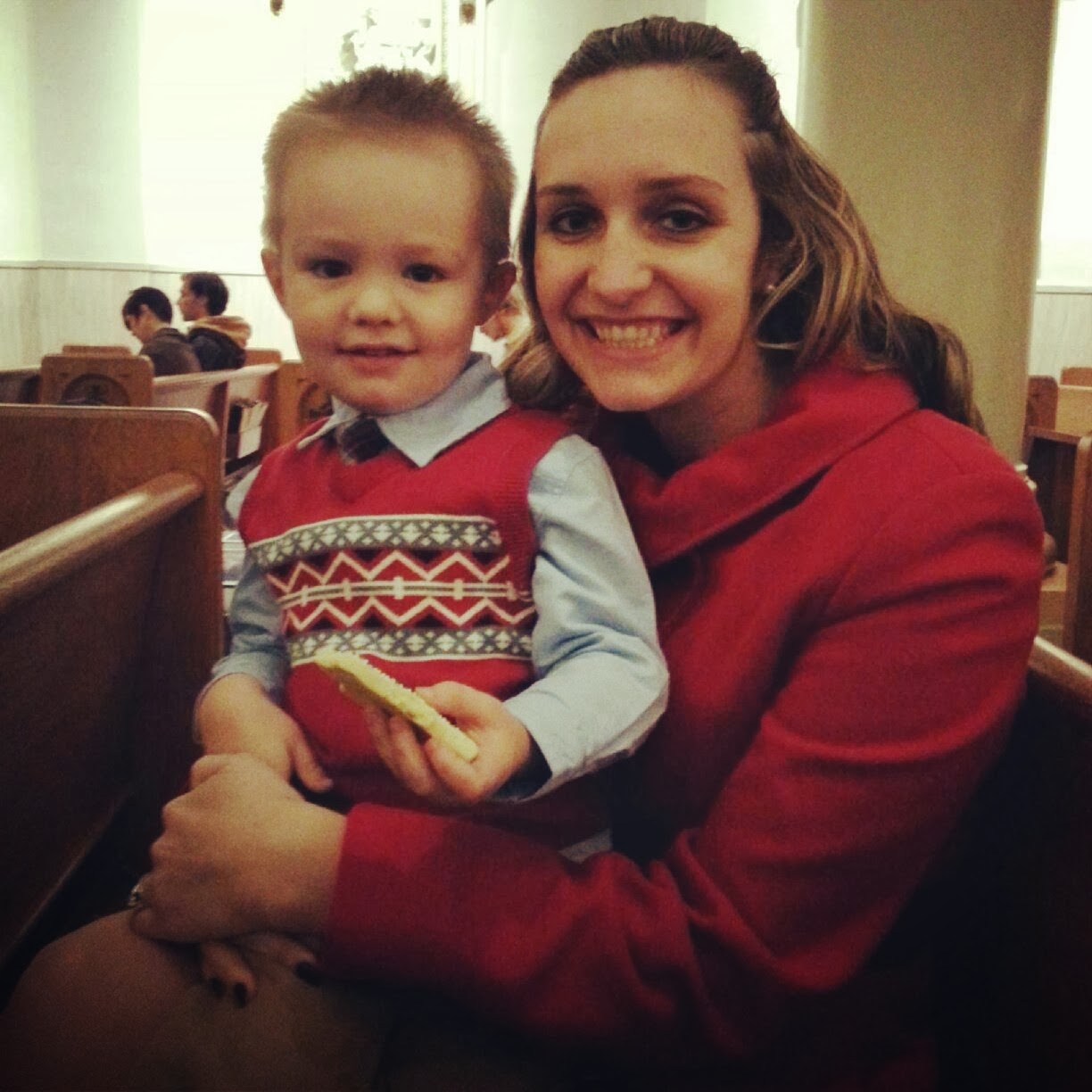 We got home well after 2am and went directly to bed. A little before 10am Christmas morning, Landon woke up and it was time to open gifts. This was the first year Landon was old enough for Santa and in Adam's family, Santa leaves gifts unwrapped which worked out perfectly because Santa brought Landon a tent. He came downstairs and saw it and had no idea what it was. He then opened his wrapped present from us (a sleeping bag to match) and we proceeded to explain to him that he could sleep in his tent. Once he understood, it was a hit. 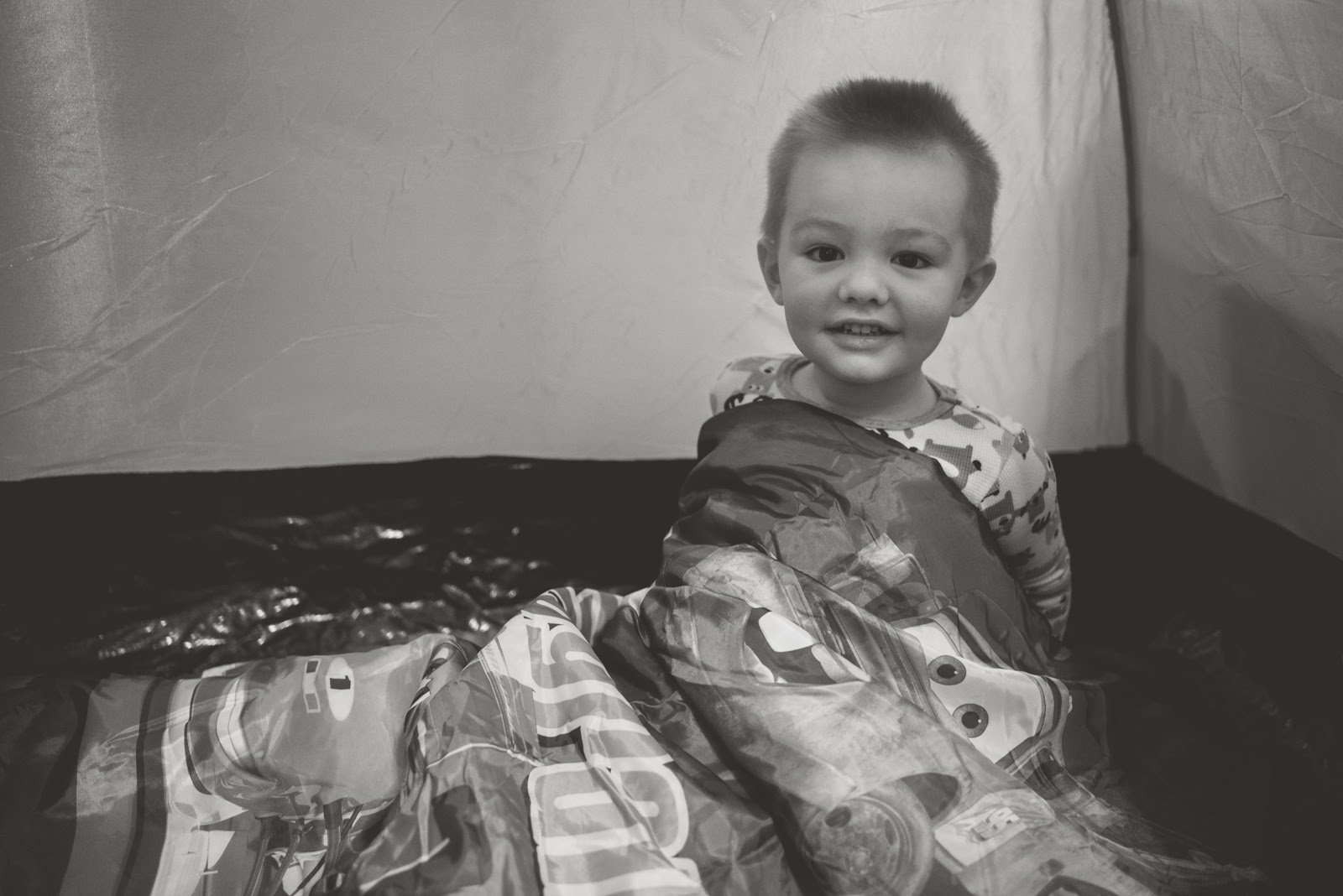 He even got Daddy to get inside with him and play. 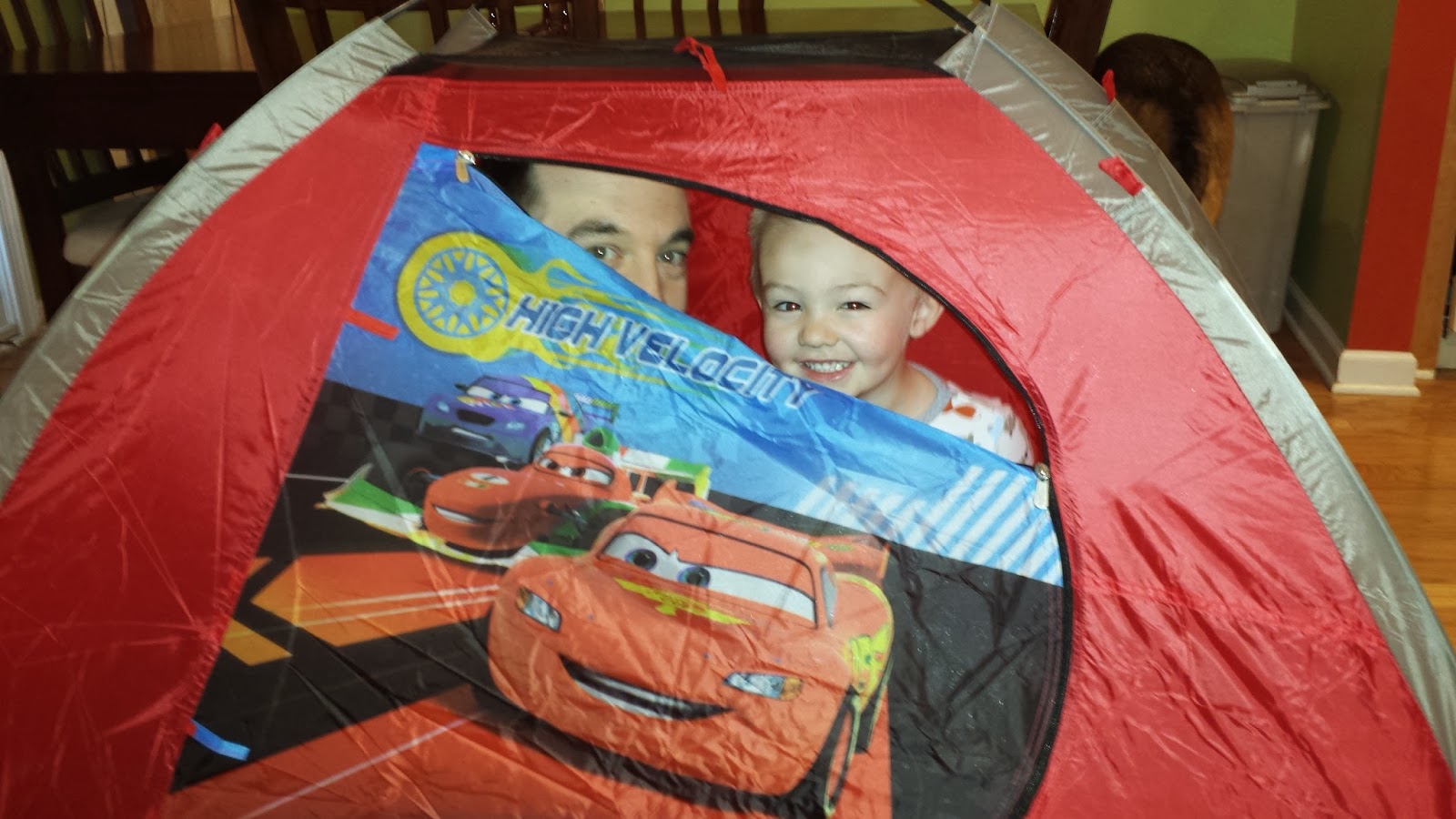 Once I was able to pull them out, we finished opening gifts. Adam got a set of trekking poles he's been wanting. He's on a mission now to become a mountain man. 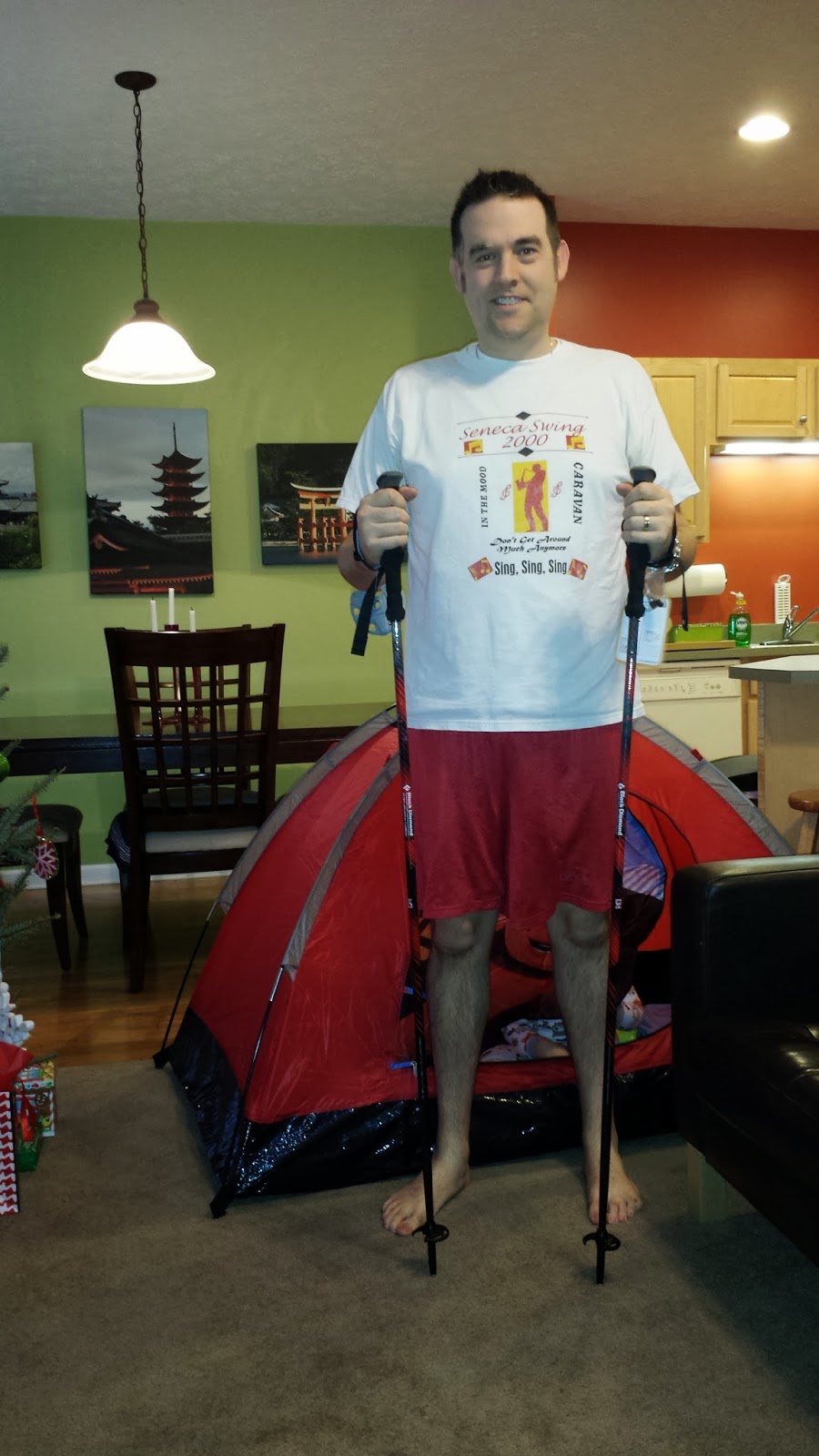 And I got a new GoPro! Landon also got a shark race track, which in hindsight should have been given to him by Santa since it came in a million pieces and took Adam forever to put it together. Lesson learned. 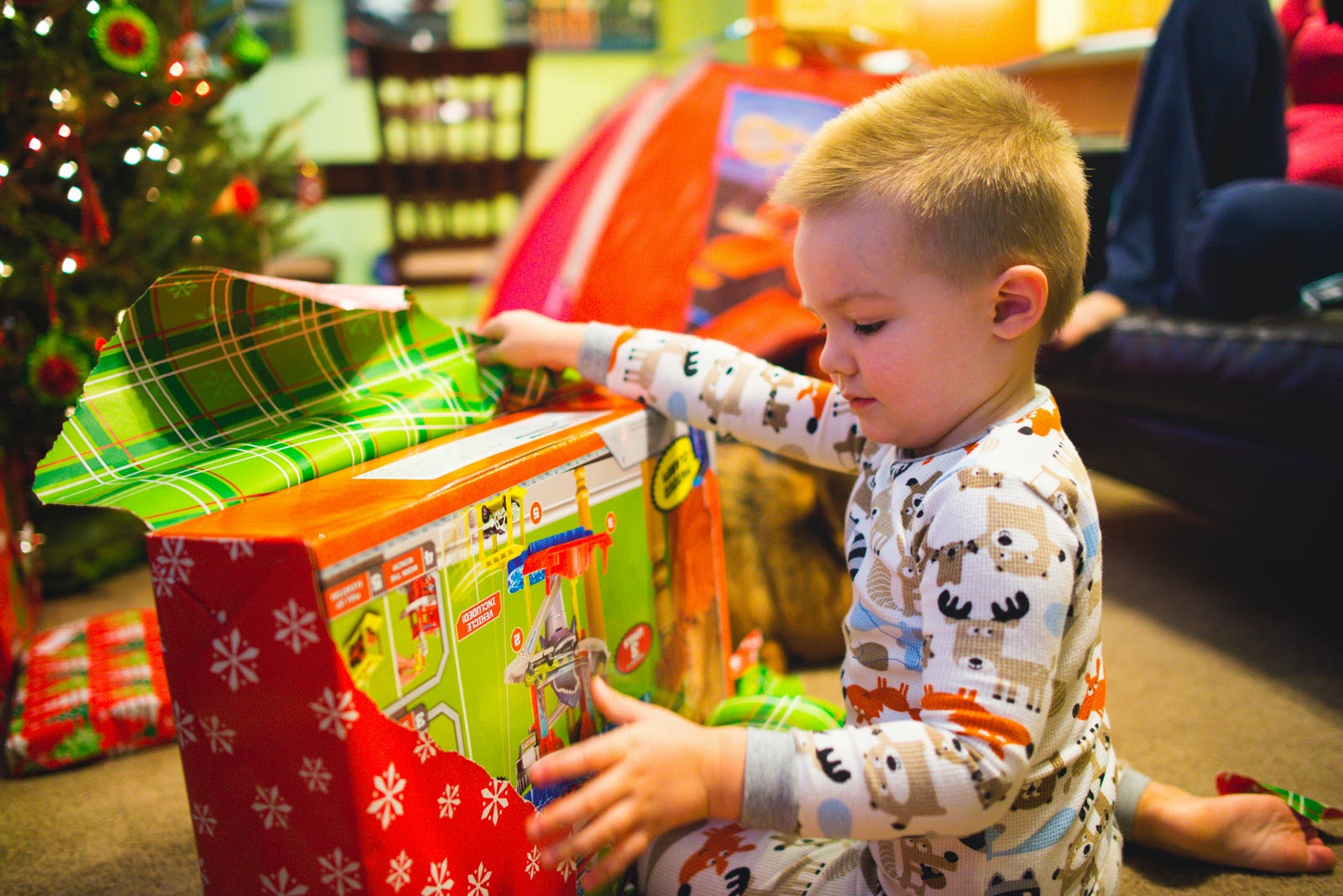 Just about the time Adam finally got the race track together Grandma showed up. She was super excited to give Landon his gift, because she knew he would flip over it. And he did... 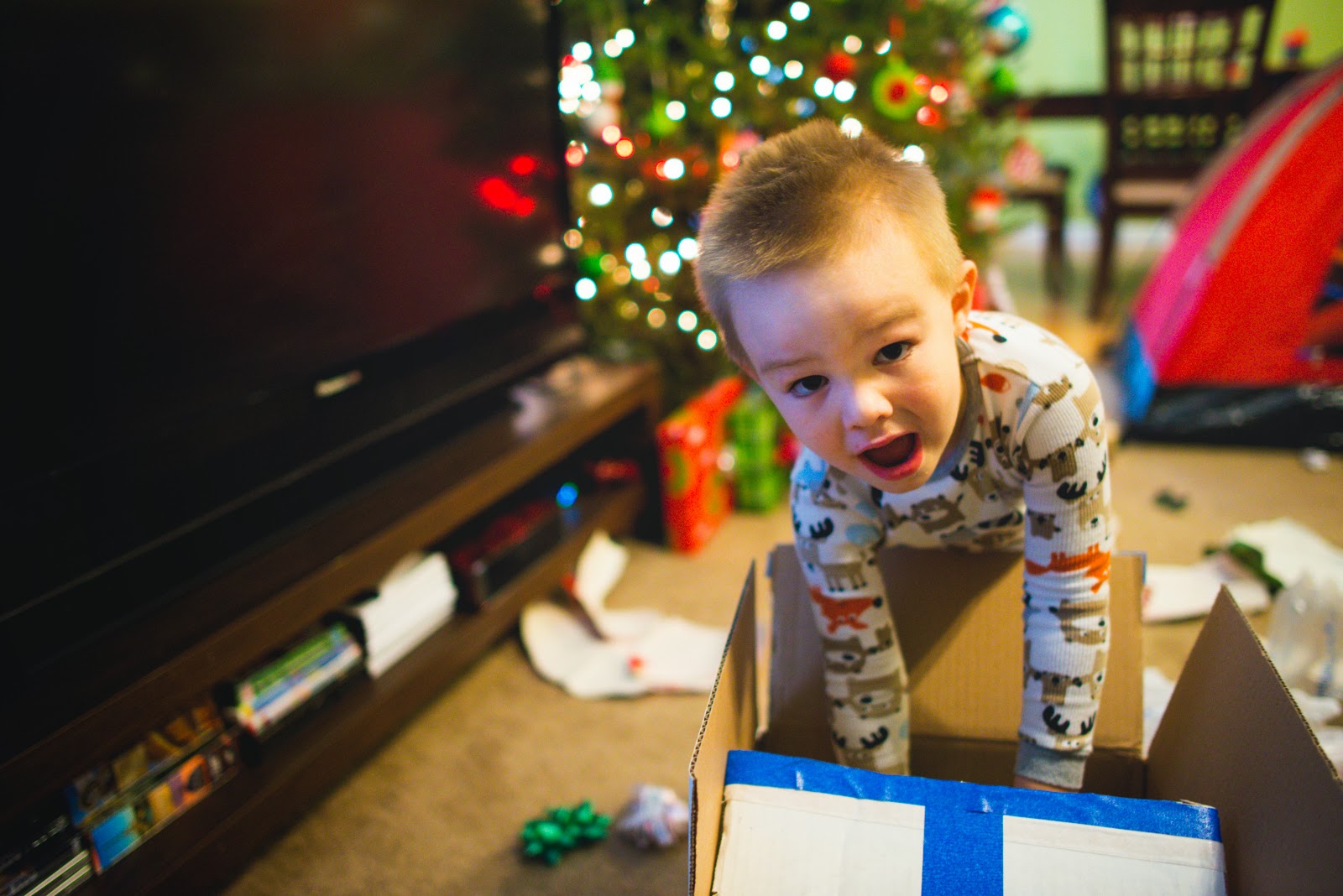 Landon loves the show Little Einsteins (he calls it Pat Pat) and told my Mom way back in October that he wanted a rocket ship. So even though Disney doesn't make it anymore, Grandma got on ebay and found Landon his very own Little Einsteins rocket ship. I'm pretty sure he officially owns ever mode of transportation now. The rocket ship takes the cake. 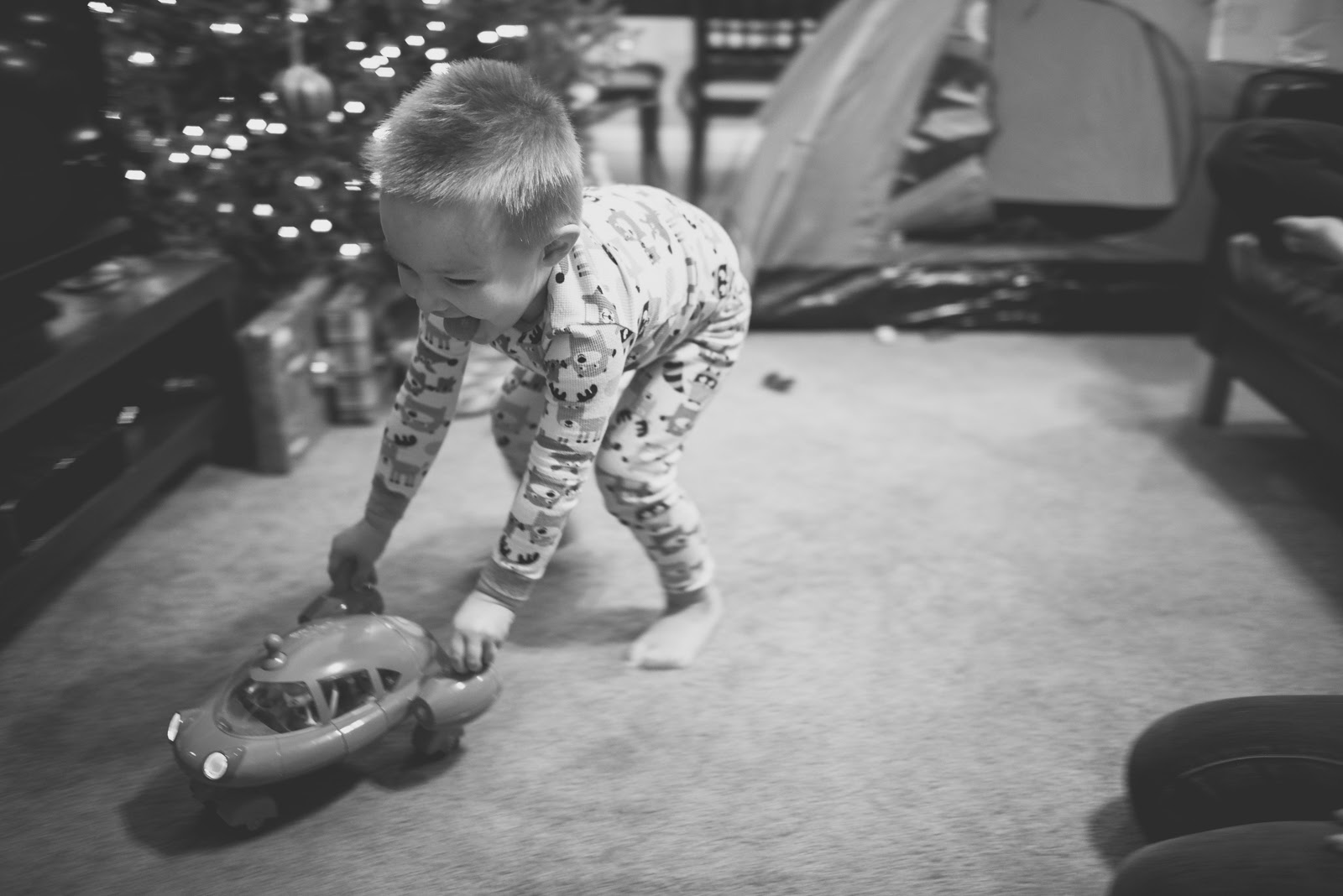 We exchanged some gifts with Grandma. 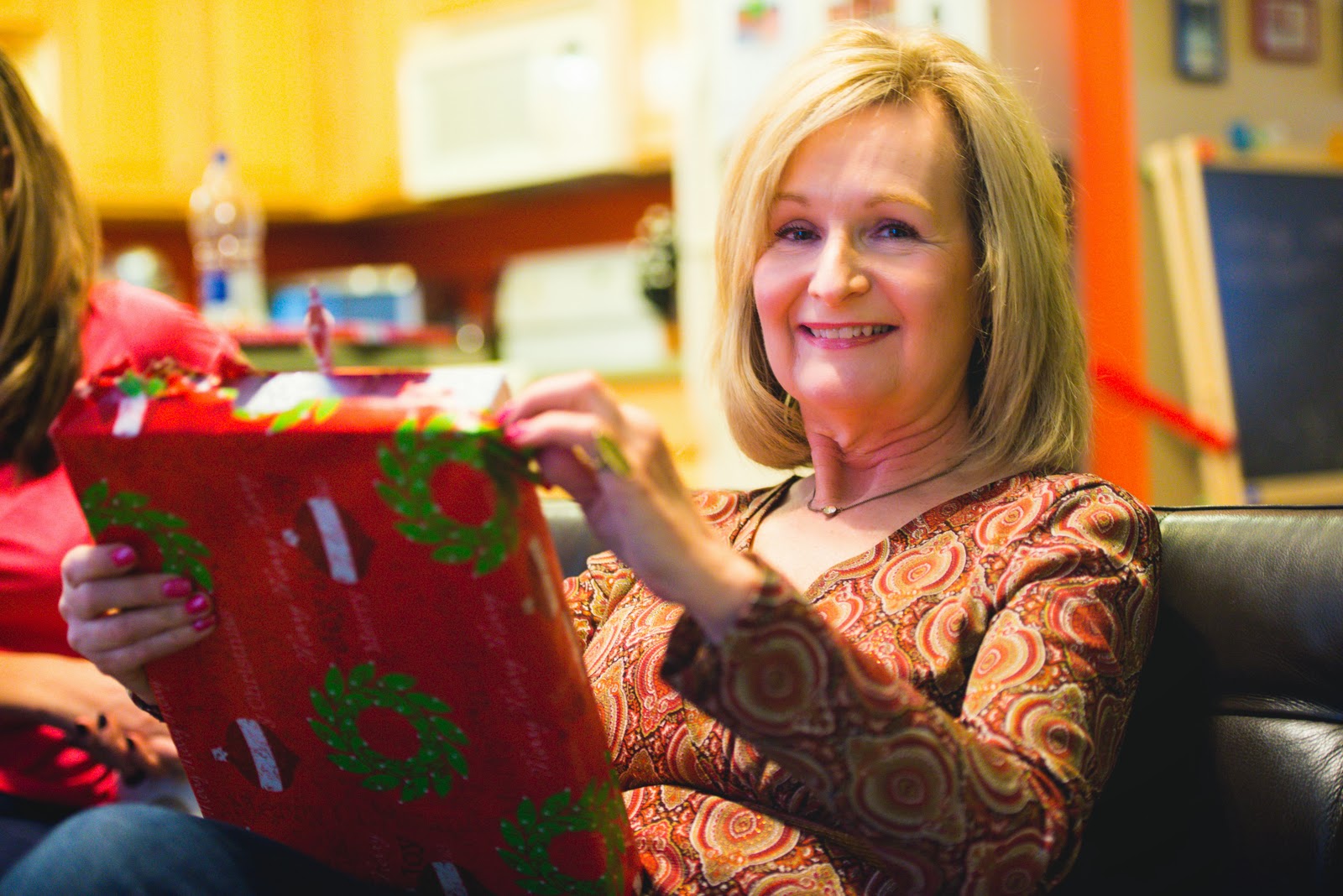 Landon gave each of his Grandparents an ornament with his hand print. It's something we tried his first Christmas, but was a total disaster. Now that is old enough to follow directions we were finally able to make one successfully. They were a big hit with all the Grandparents and turned out super cute. 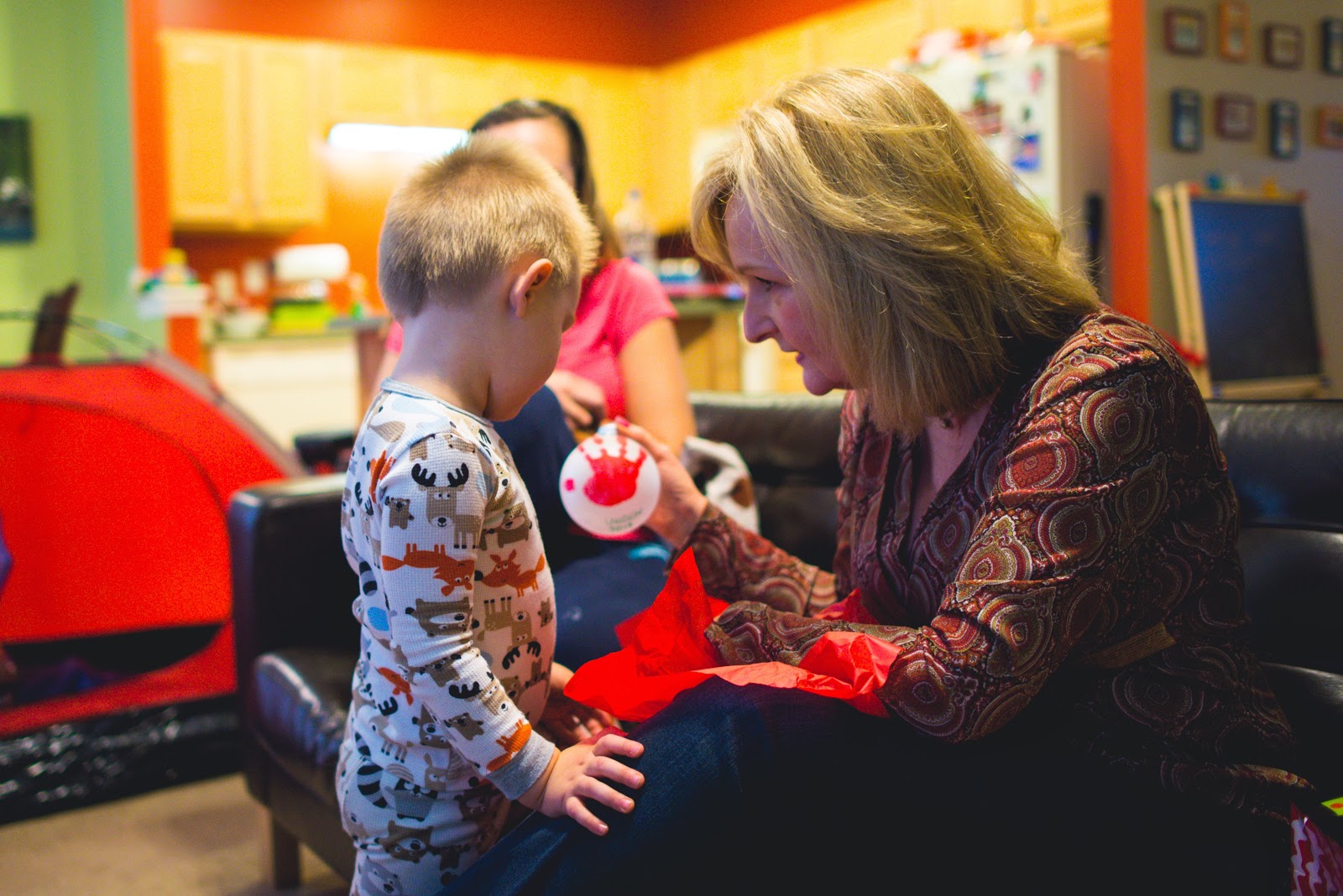 After we were finished opening gifts something crazy happened, I finally watched a Christmas Story. I know everyone else in the world has seen the movie, but I never had. Adam's been on a mission for 10 years to try and get me to watch it, but I always resisted. To me it just looked silly. Well something happened this year and I caved. We all watched it and I have to say it was pretty alright. Afterwards, Landon took a long afternoon nap, in his tent, while we prepared dinner. After an amazing Christmas dinner we spent the rest of the night playing and relaxing. Of course grandma had to check out the tent too. 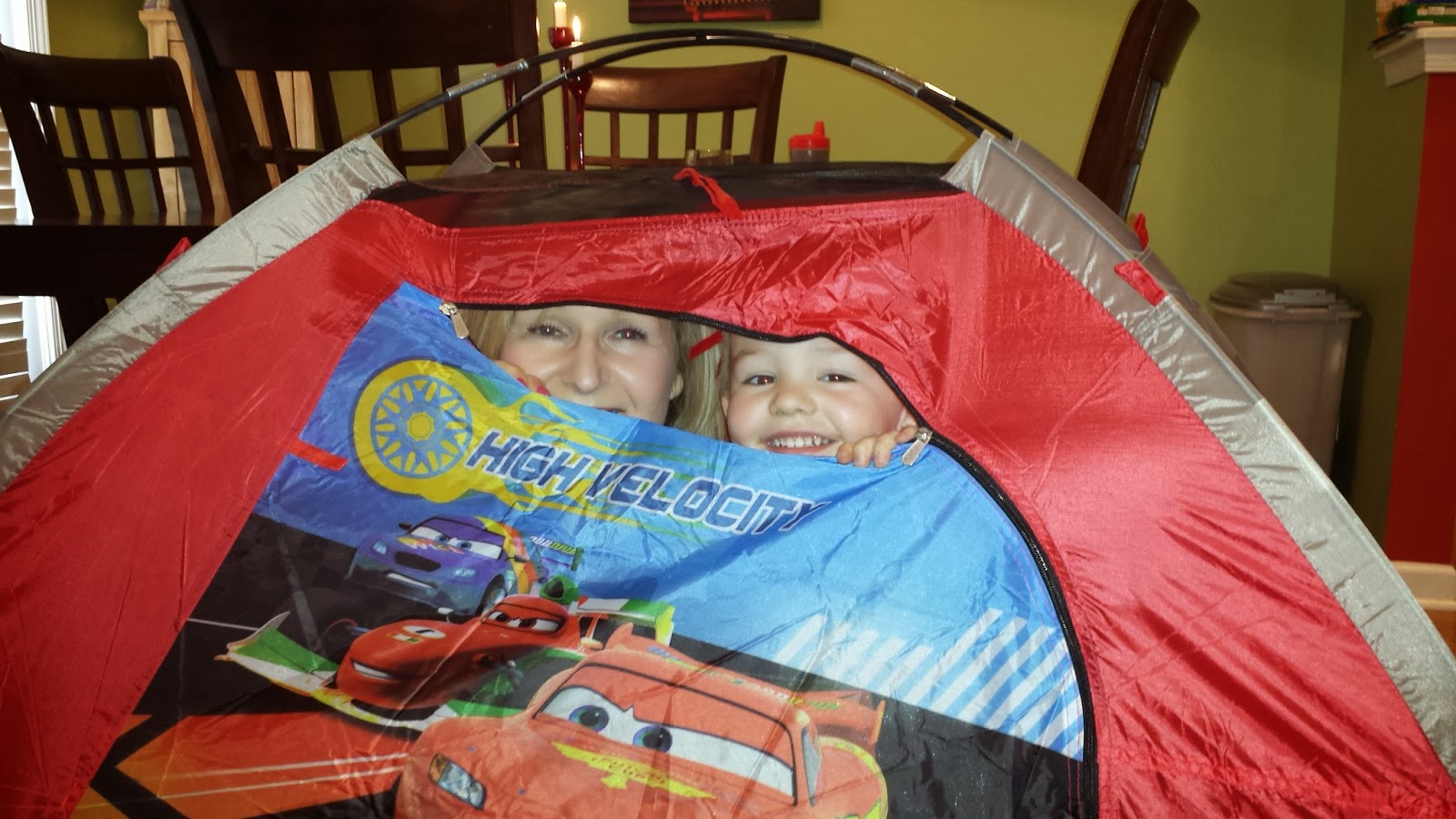 This was our first Christmas away from our family. My Mom made the trip to Nashville to spend it with us, but we normally run around making a point to see all of our family on Christmas Day. Instead of the day being a whirwind, it was relaxed and simple. We didn't get caught up in getting Landon a ton of gifts either, but there was no shortage of Christmas joy. We got to spend lots of quality times on Christmas Eve and Day together as a family and I wouldn't change a thing. And speaking of family, this post wouldn't be complete without a Christmas picture of our furry son. Kaiser had a Merry Christmas too! 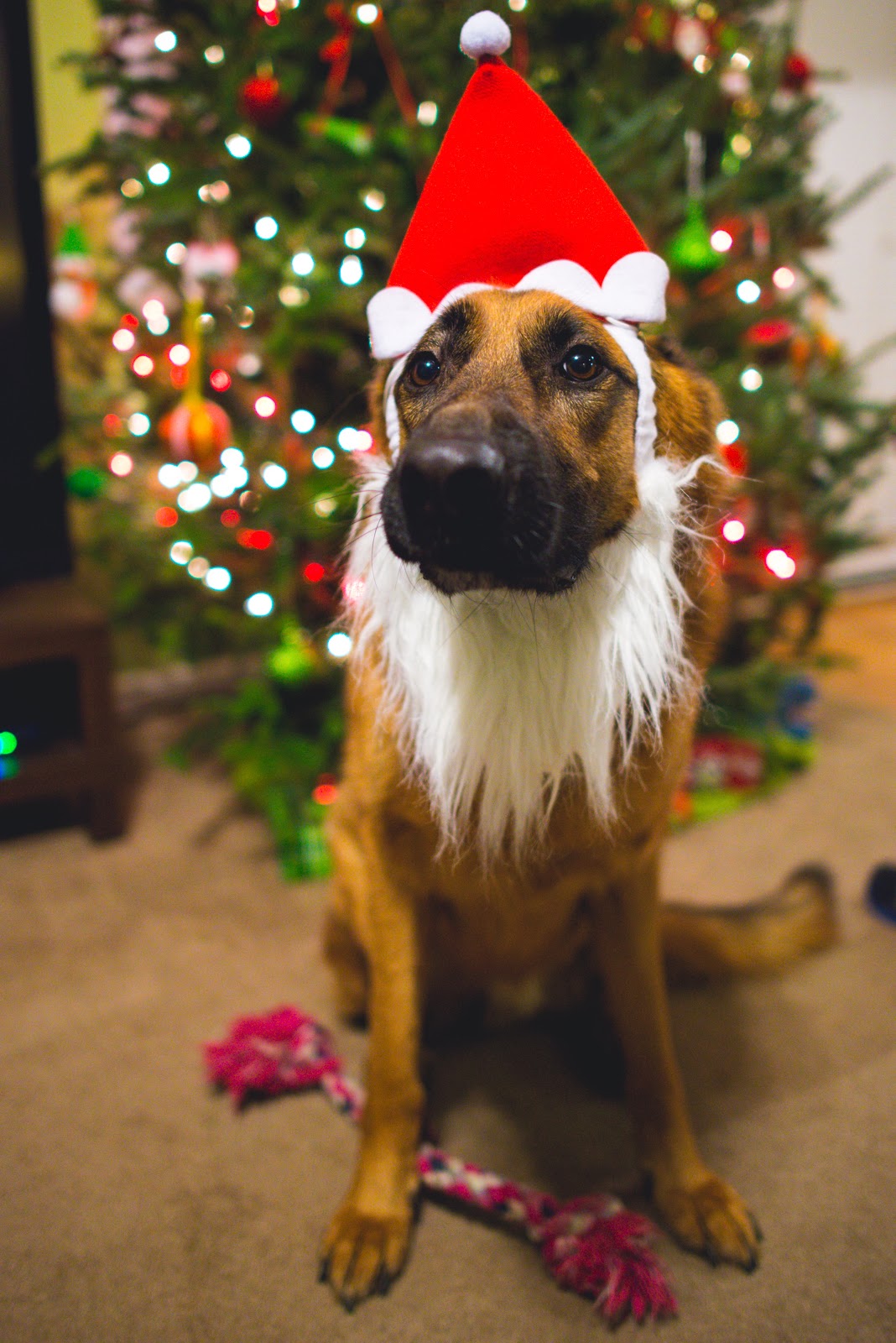