It's been two months since I've blogged. Two months since I've even opened a page to start writing anything down. Truth is, after my last post things actually got worse. Well maybe not worse, but harder on us, and me and blogging lately has been the last thing on my mind. We found out a few days after Adam's accident that the woman that hit him was uninsured. To make matters worse we unknowingly didn't have uninsured drivers insurance which stemmed from our move to a different state and not adjusting our insurance at the time. It was a huge mess and now we have to take the lady to court. Despite that, the hardest part of the first three months of 2014 was adjusting to having Adam being gone or working, all the time. We moved to Nashville for him to really start a career, to reach his goals in his professional life, and to put us where we want to be. It's been amazing how much he has learned, grown, and accomplished in just seven shorts months, but that hasn't been without it's sacrifices. After Christmas started, the peak of busy season began forcing him to travel constantly, work every Saturdays and often long nights. January, he was home a total of 14 days. It was a huge adjustment. To have to take care of Landon, Kaiser, the house, and work full-time without having anyone in a city to help and support me was difficult. The worst part though was just not having Adam around. Much to the annoyance of family and friends, Adam and I have been glued at the hip for over 11 years now. People often told us absence makes the heart grow founder. We have never found that to be true for us. For me, with him being gone I got into a routine of doing everything myself and when he would come home on the weekend it would be an adjustment. I can't remember the number of times he asked me if I wanted him to find another job. Being apart forces you to adjust without the other person and so when they come back you have to adjust all over again. It's not an easy thing. I'm sure military families go through this to an even higher degree. I can't imagine.

Since the end of March though his traveling has stopped. Busy season is over until October and he's been home. We've adjusted back into life together which now includes being home for dinner, sleeping in the same bed, and two day weekends. We are happier than ever  and while the last few months really, really sucked, I'm ok with it starting over in October. I'm sure all the same feelings and hardships (hopefully not a totaled car or broken bones) will happen again. They will probably happen every year until he is out of public accounting, but short term sacrifices are worth the long term gains. The gains are already paying off and as long as we are always both on the same page I know we will be fine.

All that being said, things have really picked up since busy season ended. Spring FINALLY got here and the last weekend of his busy season, my Mom came to visit us. Here is the first official, 'yay we can be a real family again' picture taken just after Adam got off work on his last Saturday. 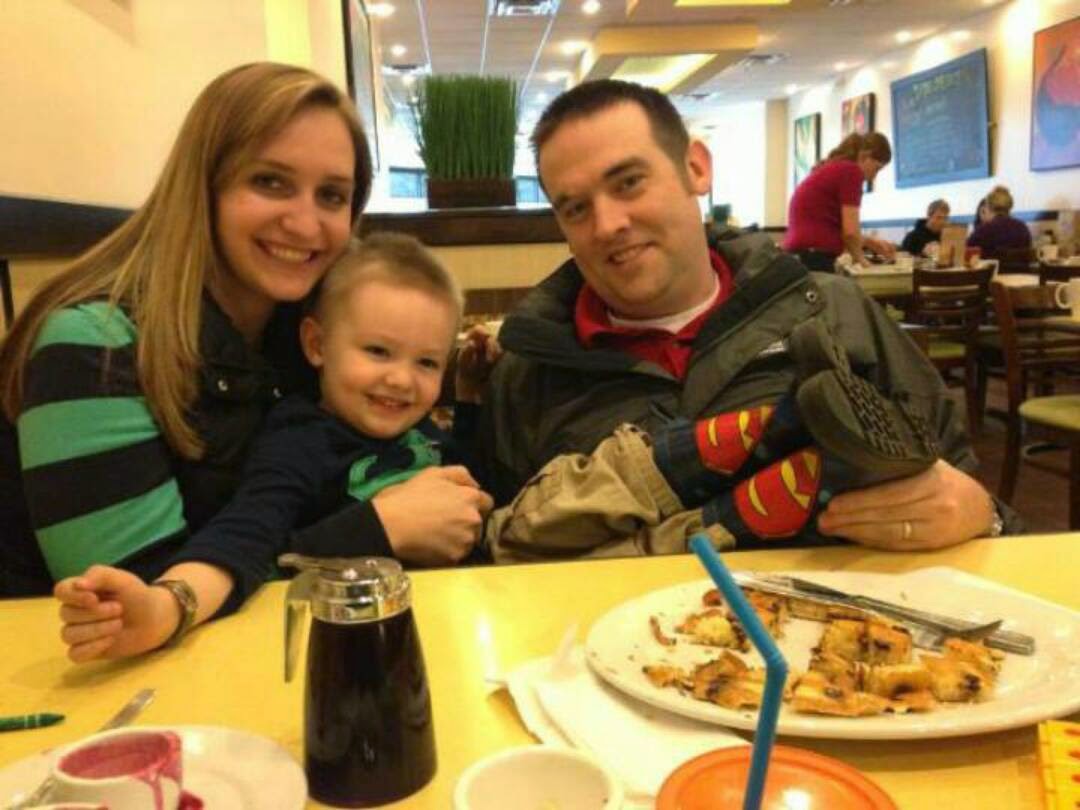 From this point forward life has been good again! We took this picture at my Mom's and I favorite local restaurant, First Watch. It's so good that Mom's decided we will pay it a visit anytime she comes down. Landon enjoyed the chocolate chip pancakes. It was first time getting chocolate and pancakes together and he was in heaven!

While Mom was in town we took Landon to our favorite local playground and enjoyed some warmer weather, at the time (the last week in March) it was around 55, which felt like 90. Since Adam was able to come he took the opportunity to take some recent pictures of Landon. 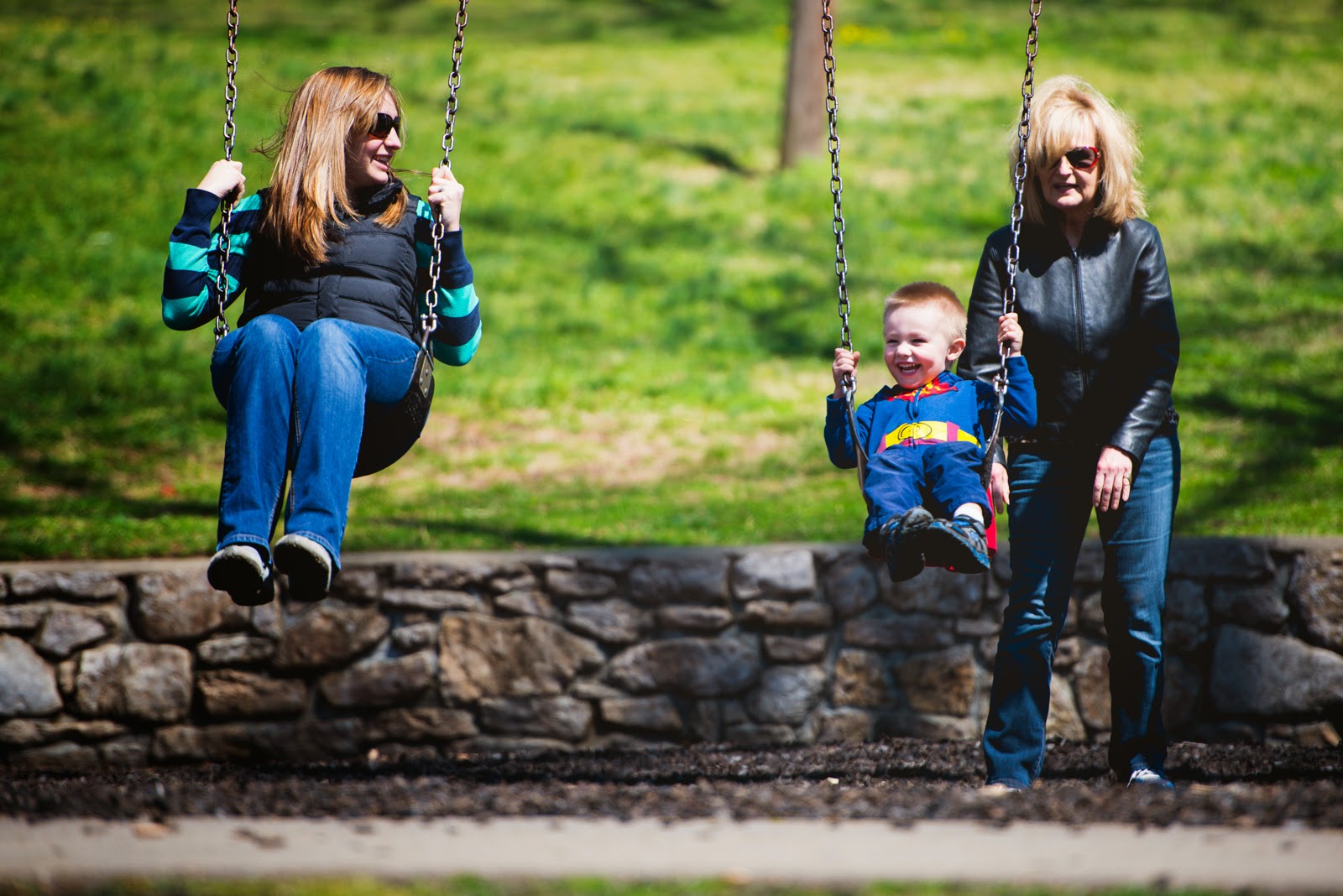 The following weekend Adam's Mom and our nephew paid us a visit...for the first time! It was great to have them down finally and the boys had a great time playing together. They are four years apart and Landon absolutely LOVES his big cousin, but you can tell the age gap sometimes makes it hard on Taylor to put up with Landon's annoying younger habits. Taylor's always a good sport though and loves his little nephew. We enjoy watching them together. Saturday we took the boys to Centennial Park and walked around. We went around the Pantheon and played in the park. It's a wonderful park in the middle of downtown with playgrounds, open fields, a plane, train, and of course the Pantheon (which we've walked around about four times now, but have yet to make it inside). 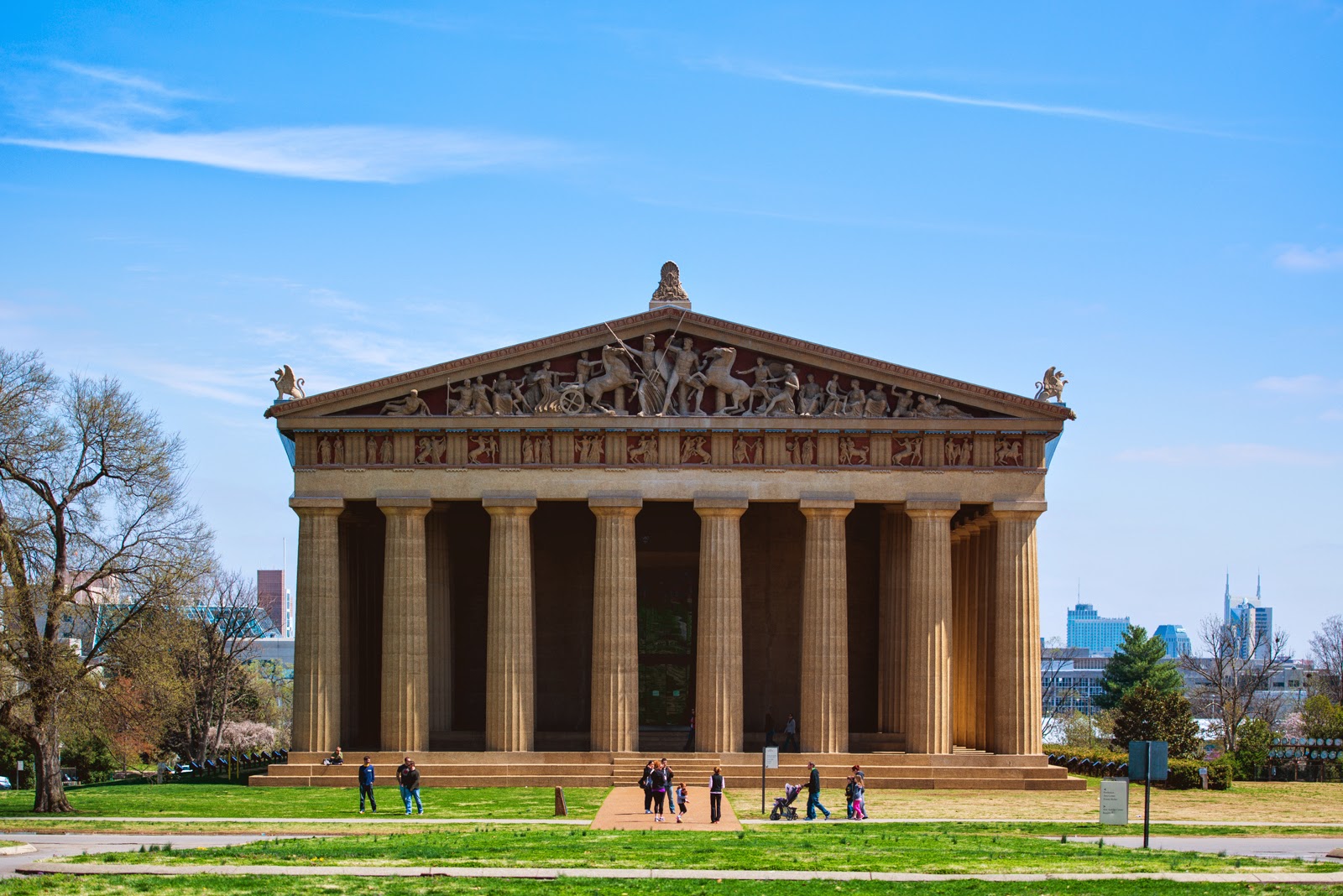 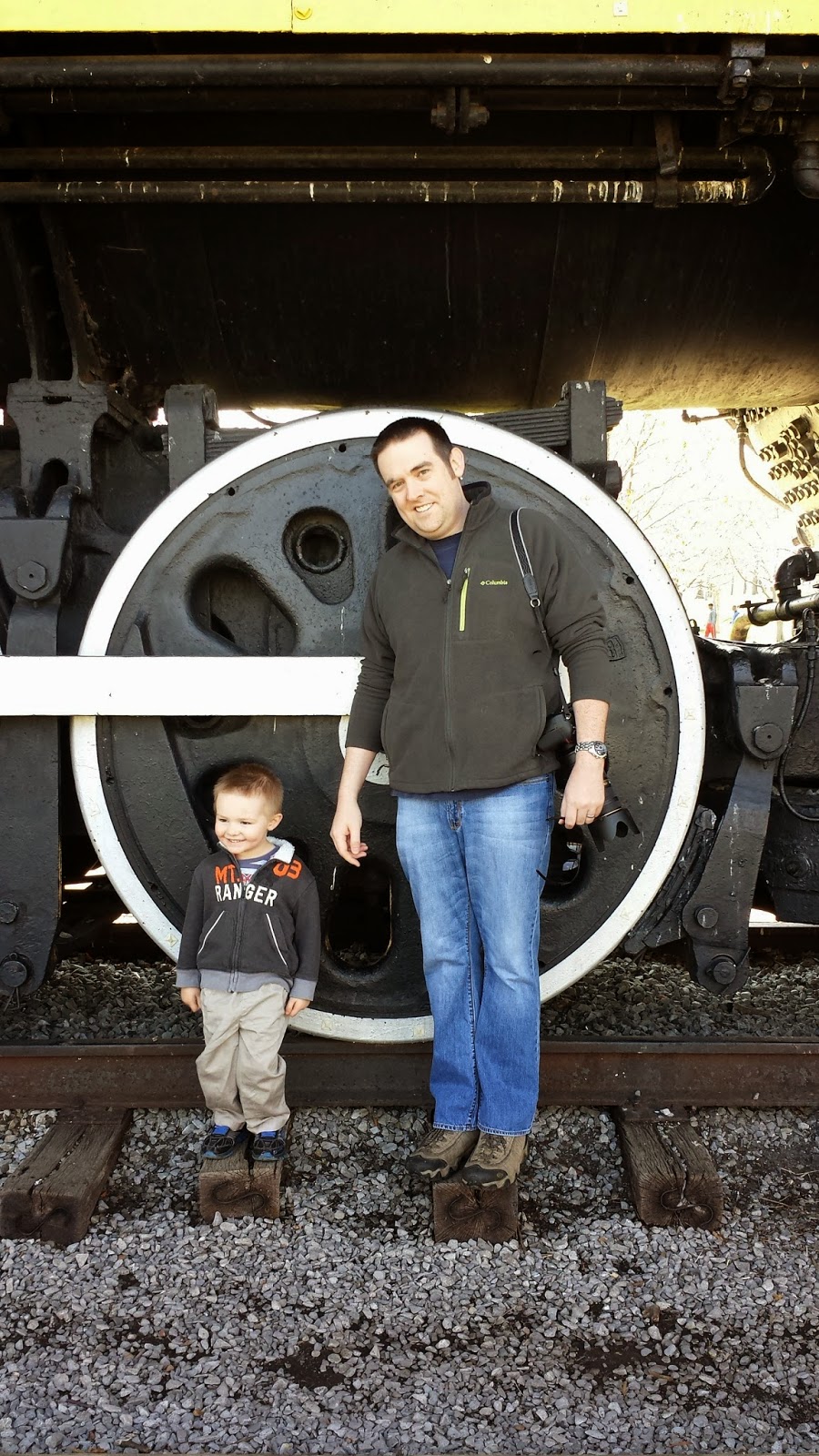 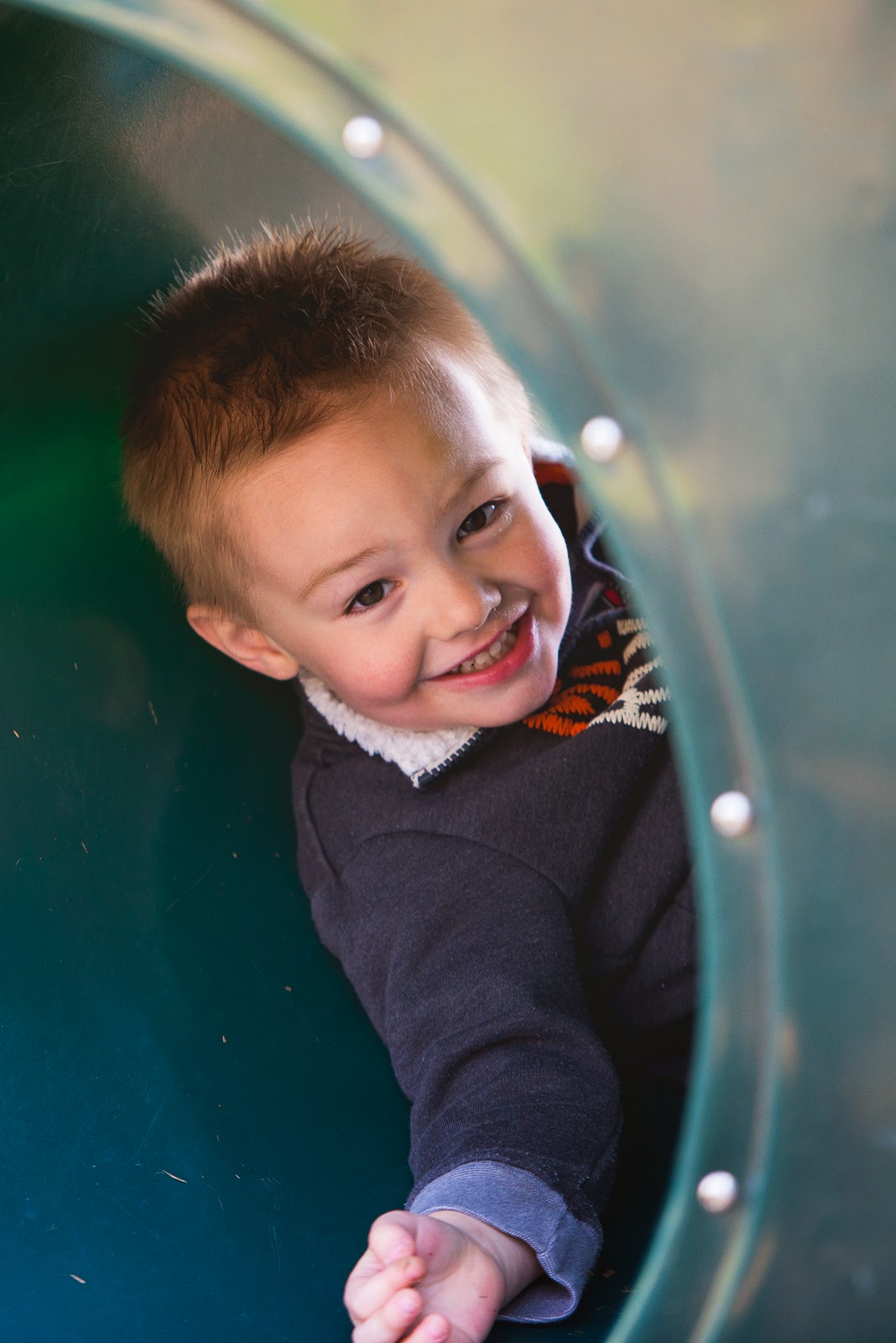 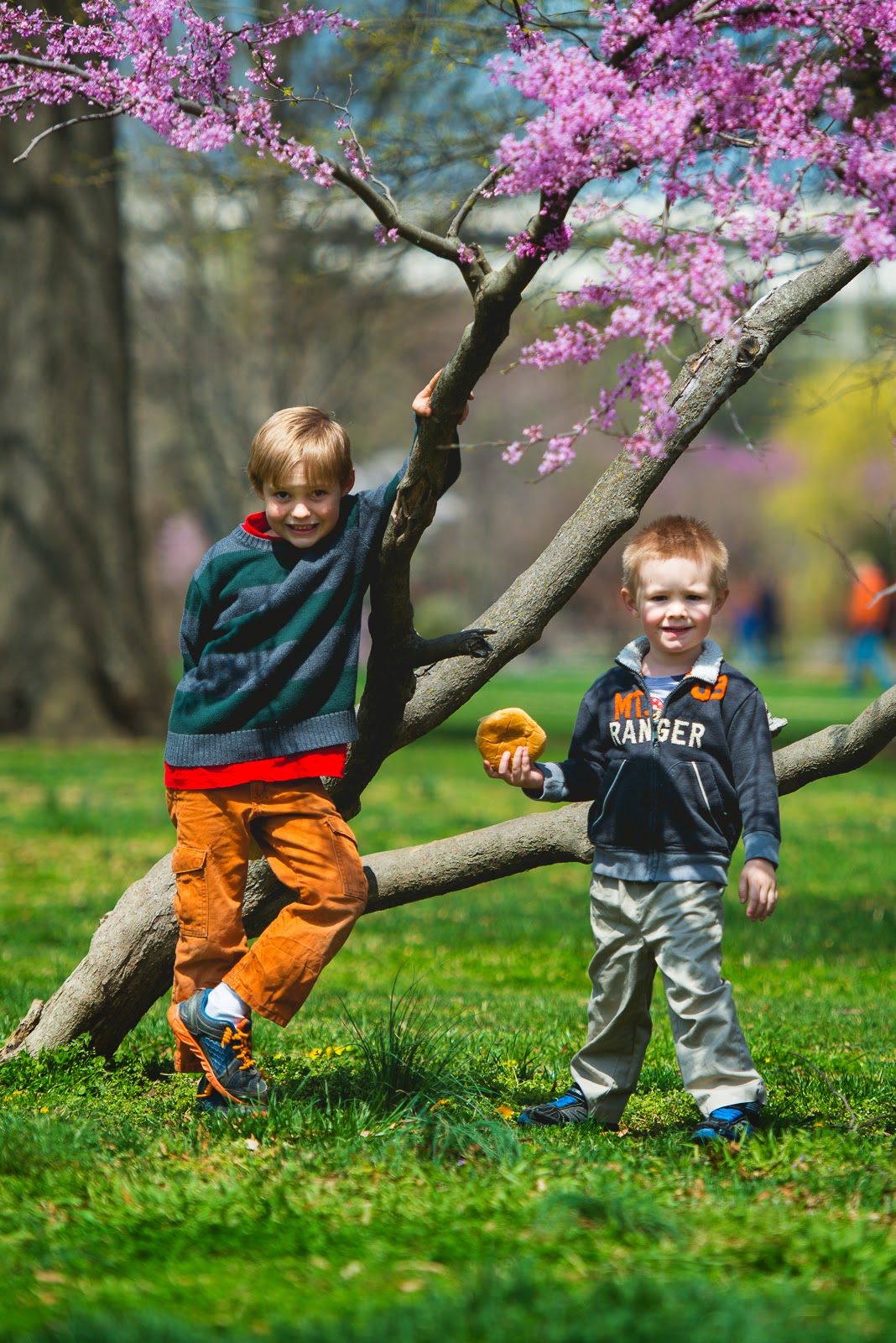 We took them around the city and enjoyed some down time at home letting them hang out and play together. We all watched Frozen, some of us for the first time, while Taylor knew every single word. I found it to be an OK movie, but I just don't get the hype. That being said, I convinced Landon to watch the Little Mermaid with me a few days later and that is still the best Disney movie of all time. He did shush me while I was trying to sing though and that was pretty much torture. Since they left, Landon's watched Frozen again and has started singing "Let it go, Let it go" over and over again. Adam and I are trying to decide if we should let him watch more so he can learn more of the words or never let him watch it again so hopefully he will stop and forget it all. We are still on the fence about it.

It's wonderful to be married to someone who takes such great pictures, but I've enjoyed keeping this blog somewhat consistently over the last year. As nice as pictures are, it's also nice to write down about our life and adventures, not just to share, but to document for ourselves. Unfortunately, this online diary took a backseat in these last few months, but I'm hoping to get back on track and I have a lot of catching up to do.