Since we've been in Nashville we've done more hiking and exploring parks than we ever did growing up in Louisville. It's partly because we've made a conscious effort and partly because Tennessee is a gorgeous state with so many great state parks near where we live. A few weeks ago we checked off yet another state park and waterfall from our to-do list when we visited Cummins Falls State Park. Before I go in detail about the trip I should preface by saying the night before I may have had too much fun while out celebrating with my co-workers. 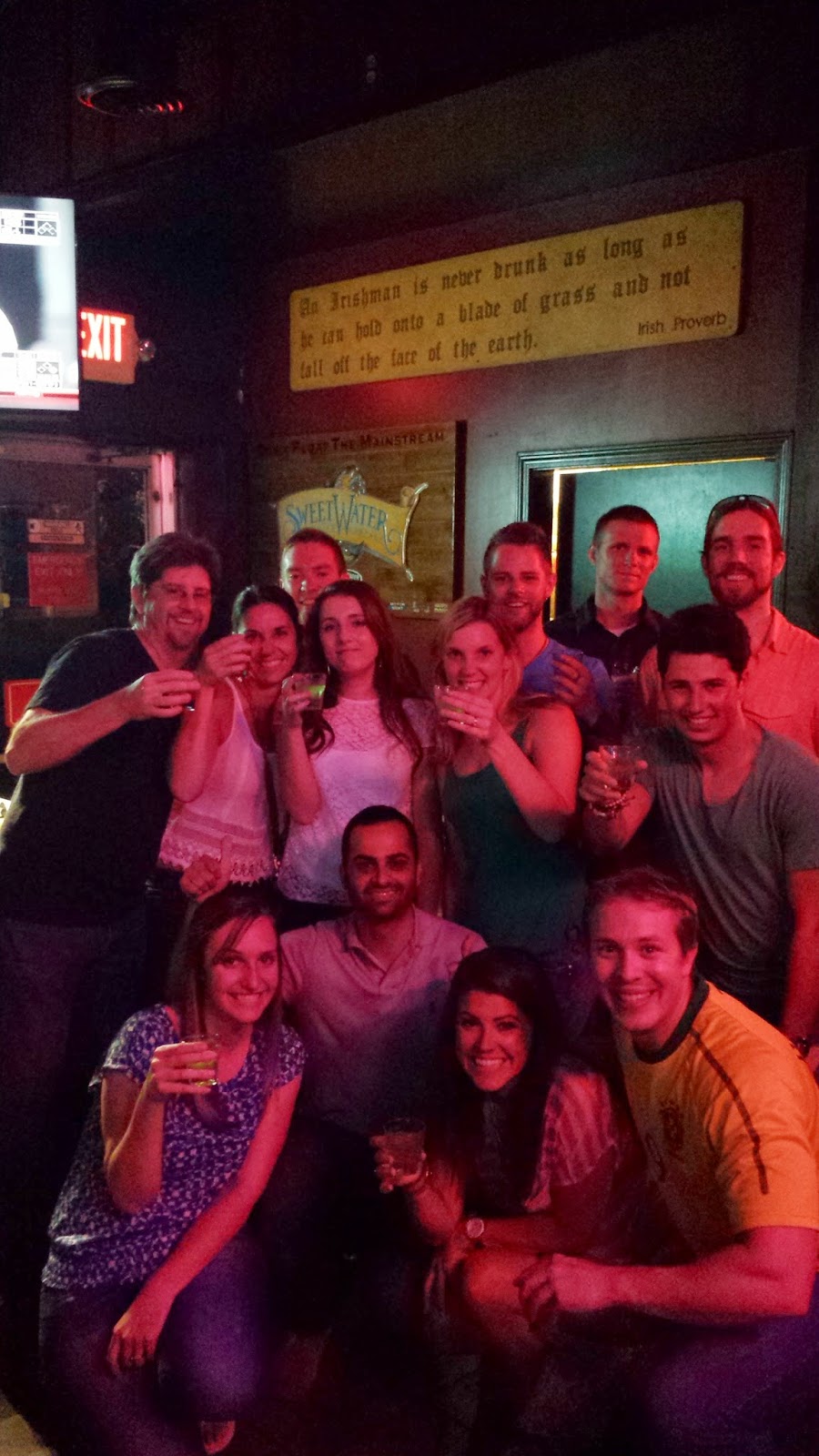 Unfortunately, two of my co-workers were leaving so although I normally don't hang out with the crazy party crowd, I had to be a part of the good-bye celebration. Hands down, my favorite thing about my job is the people and how diverse of a (small) group we are. From all over the world, we've somehow managed to all be at the same place at the same time and it's been a real pleasure to get to know them all no matter how short lived.

So Saturday morning, when Adam decided we should go on a hike on the way to breakfast, I threw my hiking boots in the car and hopped in not having any clue what he had in store for us. As I waited for my egg sandwich at Panera, Adam picked Cummins Falls for our little hike. About an hour and half outside of Nasvhille, Cummins Falls is only a half hour away from Burgess Falls which we visited a few months ago. 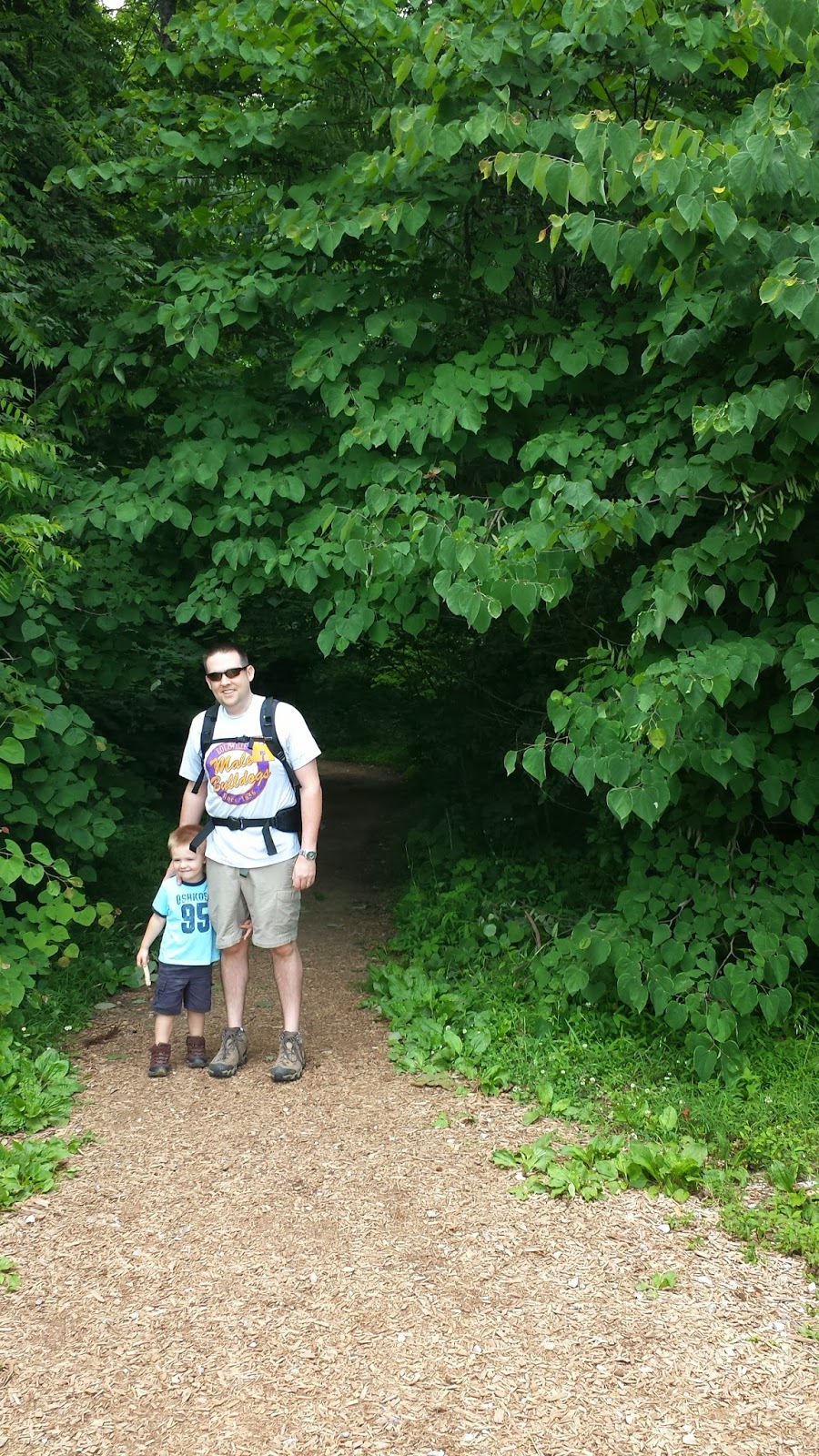 Totally unprepared for much of an adventure, we arrived in the parking lot of the state park, put on our boots and headed to the waterfall. It's a half mile easy hike through the woods to the waterfall overlook. When we got to the overlook I was surprised to see people everywhere, as in everywhere on the waterfall. 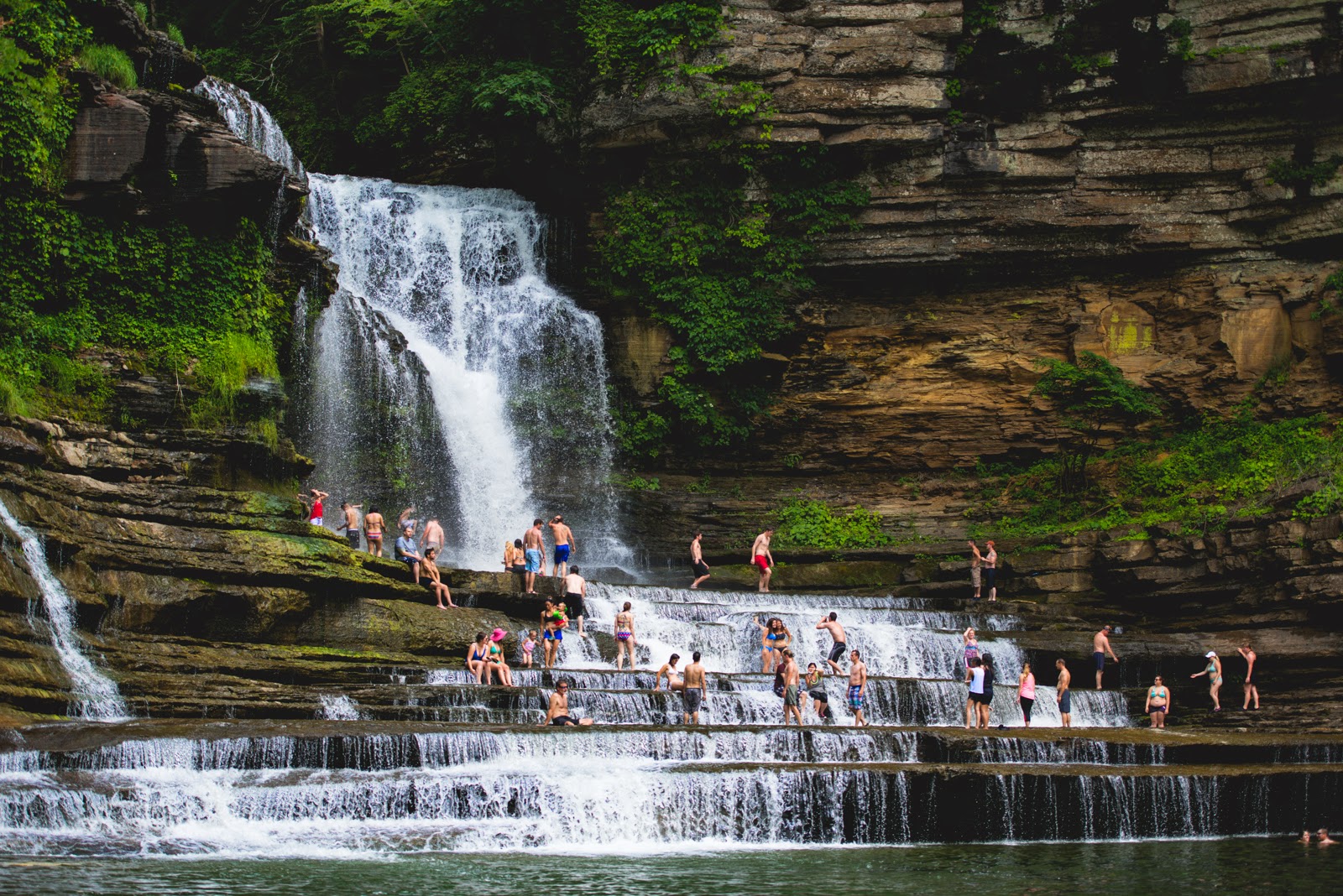 It's uncommon to see people climbing, sitting. laying out on a waterfall, but Cummins seems to be the "it" place to cool off in the summer. The wide rock slabs of this waterfall allow people to climb and hang out as long as they don't mind getting a little wet. The huge pool below was full of people swimming and relaxing on rafts as well. We were caught off guard by the accessibility of this waterfall and completely unprepared to partake in the water activities. None the less, we decided to continue hiking to the falls just over a mile and half away. Another half mile of the hike was a steady downhill climb through the woods on a beaten trail, but the second mile to the waterfall was along the rocky creek bed which often required wading in the water. This made for a long and tedious mile trek. 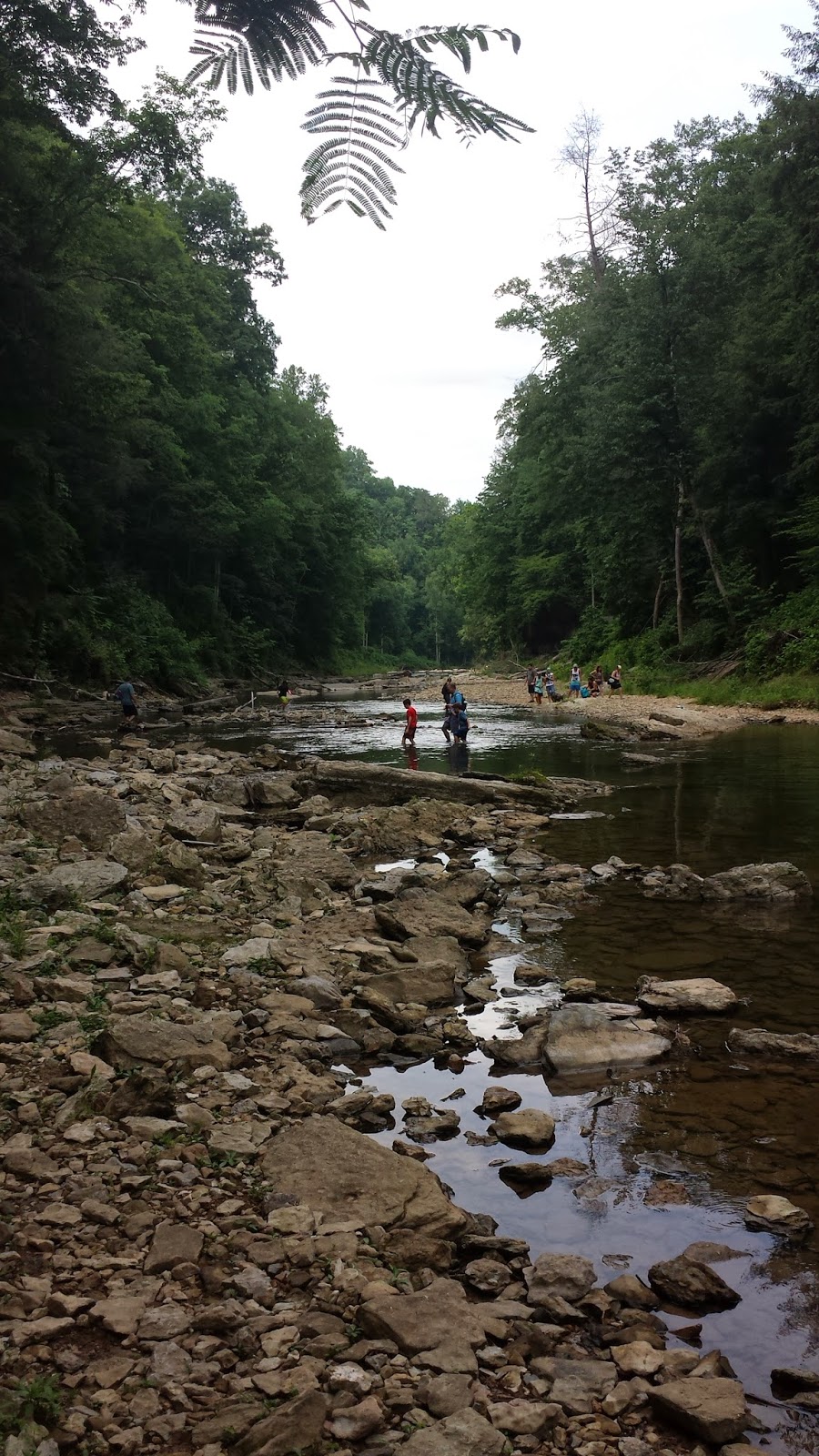 At first I was removing my hiking boots and walking barefoot through the water, but the rocks in the creek were so slippery that it was almost impossible to walk on. It wasn't long until we were all walking in the water with our boots on and Landon wasn't a big fan. Wet hiking boots are not the most fun thing. 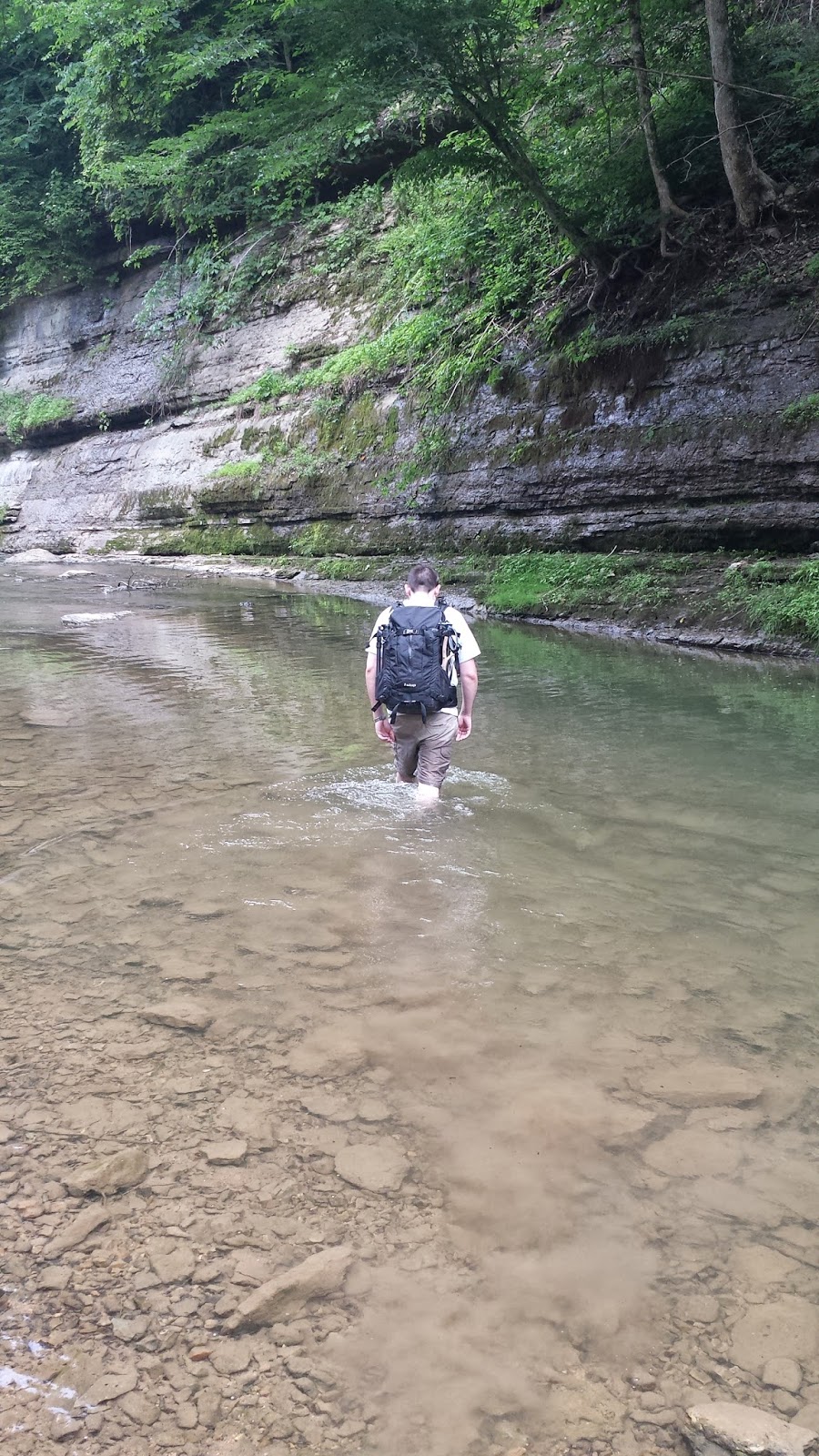 By the time we arrived at the falls we were all hot and thirsty. Having not prepared, we didn't even have water with us and Landon kept asking if we could go back to the car to get his water and then come back. As we sat there for a few minutes while Adam took pictures I kept trying to decide how easily I could be one the people swimming. Playing in a creek was something I loved to do as a kid, but I'm not all that comfortable with the idea now as an adult. The water was clear and seemed clean, but I just can't fully shake the idea of germs in a creek. I must be in the minority though, because many people clearly enjoy it and as hot as it was, had I had a swimsuit on, I would have tried not let it bother me so much and cooled off a little myself. I was hoping to at least walk across the falls once, but Landon didn't want to and knowing the hardest part (the hike back up) was still ahead of us, we cut it short and headed back. 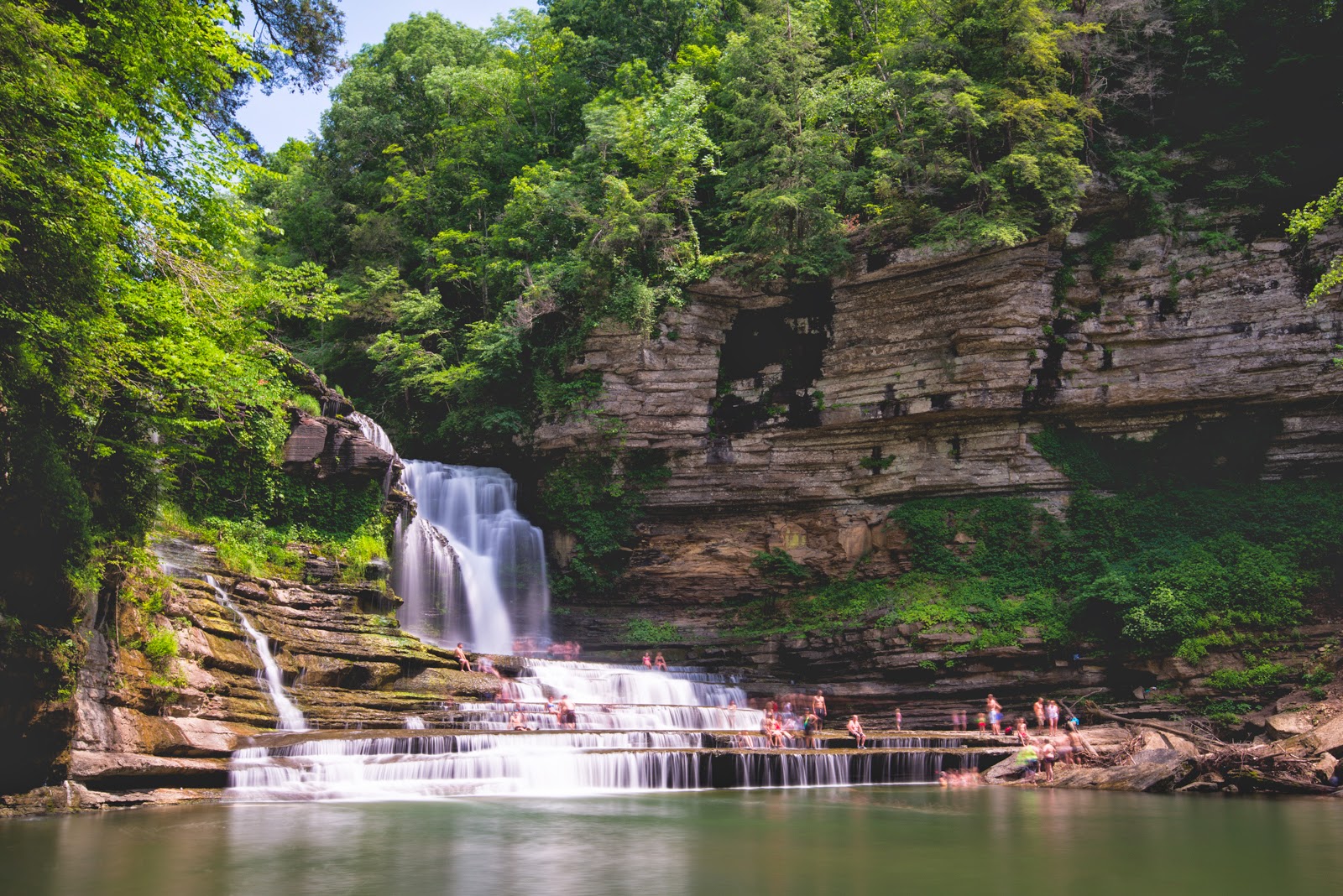 Cummins Falls is really a pretty waterfall and Adam and I would like to go back in the Fall just to enjoy the setting without so many people. And although it probably won't happen this year, I'm going to be sure to take Landon again next year so he can really enjoy it. If every boy's dream is to explore and play in a creek, then this state park is the perfect wonderland. Despite the last minute and poor planning of this hike, it was an enjoyable adventure and as always, we were happy to have done it in the end.