As we came into the peninsula on Wednesday night at sunset we could just barely make out the faintest outline of the city. You would think we'd be so giddy with excitement that we would have spent the next few hours driving all around the city, but that just wasn't the case. Yes, we were giddy. Yes, we were excited. Yes, we wanted to explore every inch. BUT, we were also tired...very tired! We were tired of driving, and sitting, and being confined in a car. Most importantly though, it was after 7pm and I had an ALL DAY interview the following day. So we arrived on the peninsula via the San Mateo bridge, checked into out hotel in San Mateo, ordered pizza, and went to sleep. It was the first time we had arrived at a hotel before 10pm on the whole trip.

At 8am the next morning, Adam, Landon and our trailer, dropped me off at the office. They headed over to nearby Pacifica and walked along the beach and around the trails as they waited to check into our next hotel. After a nice walk, they checked into our next hotel in the Half Moon Bay area and Landon took a nap while they wanted for to pick me up.

When my marathon day was over, they picked me up and instead of having a night of fun, we spent the next few hours finally ridding ourselves of the trailer that, in the city, felt like an accident waiting to happen. Adam's company gave us corporate housing for a month in a fully furnished apartment so when we rented our u-haul trailer, we also got a month of storage. We took the car downtown (our first real glimpse of the city!) and began the back breaking process of unloading it. It was a lot more work than we realized given that we had to take our goods by cart through an indoor storage facility, down an elevator, back to the other side of the facility and into our five foot high unit. It was not fun and was only made worse because we were crunched to get it all done before they closed at 7pm. By the time we were finished (at 7:30), we were hot, sweaty, tired, and DIRTY! Starving as well, we decided to head to the hotel and find some quick food on the way.

From his morning drive, Adam knew there was a taco bell on the way. Right on the beach, this taco bell had no drive thru. So we went inside, ordered our Mexican pizza and sat on their deck, on the beach, watching the ocean...AT TACO BELL!!! It was the funniest thing to sit on the beach at a Taco Bell with a million dollar view. Afterwards, we found the way to our hotel and settled in.

The next day, we took it easy in the morning, had a nice long lunch at Panera, then it was off to another interview for me. This interview was much shorter and once it was over it was FINALLY time to play!!!!!

We decided to do the most quintessential San Francisco thing we could; Drive across and photograph the Golden Gate Bridge. We headed downtown and as we got near the water, we turned a corner and there it was in all her glory. 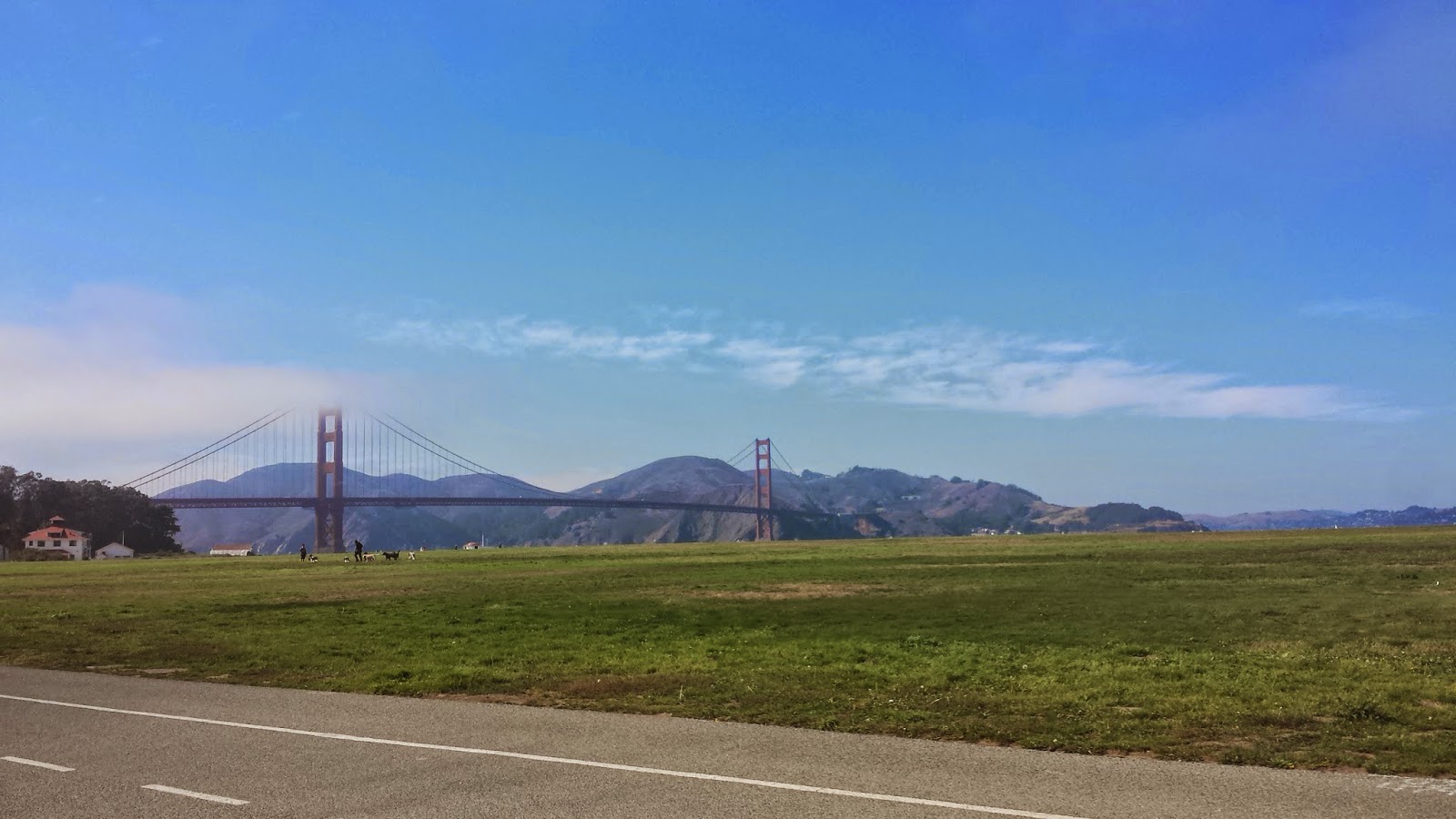 I was surprised how stunning the bridge is. I don't know of any metal structure that has ever impressed me in such a way. We wanted to go to the Marin Headlands, which meant we had to cross the bridge, YAY! 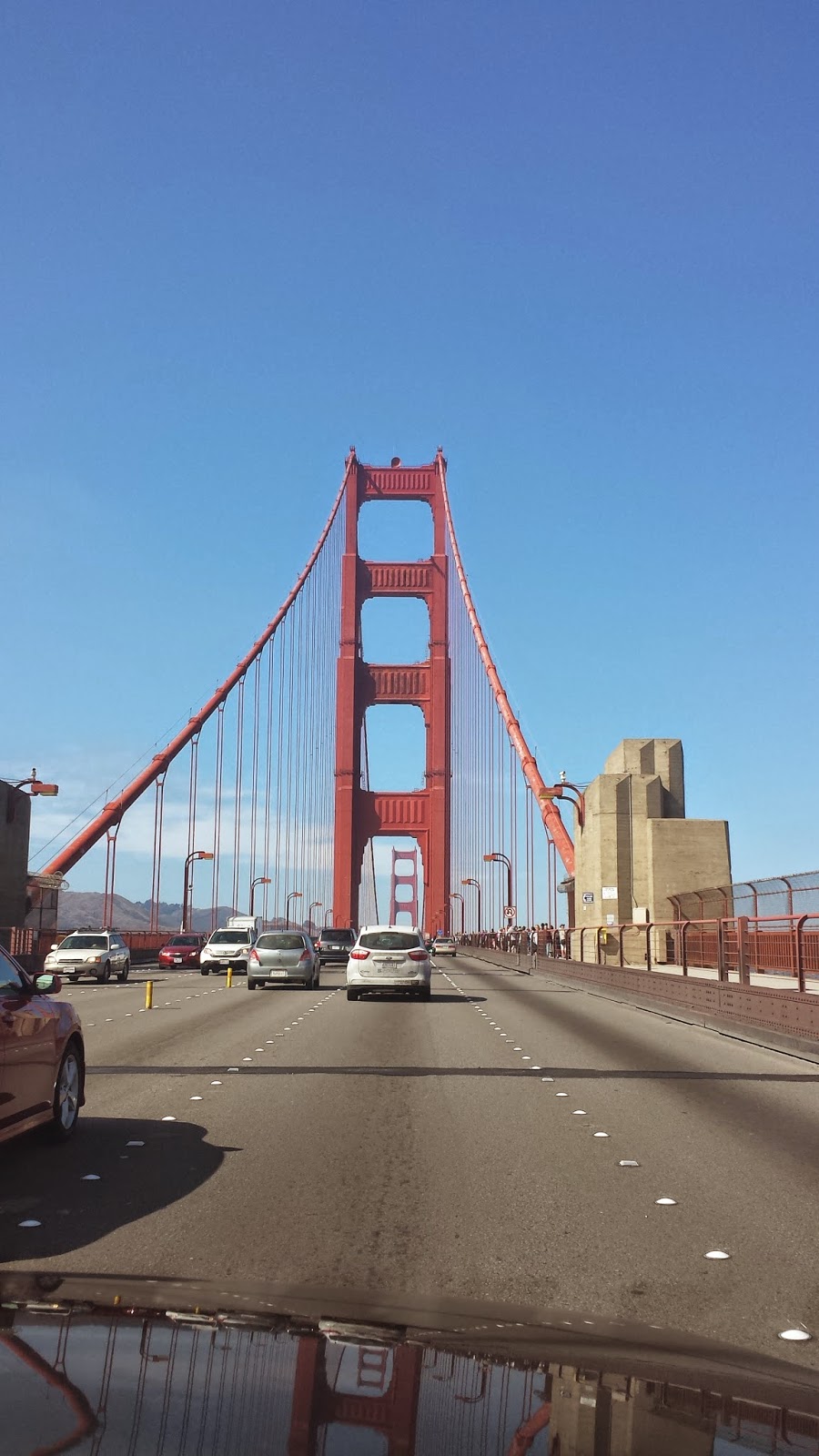 Our inaugural trip across was thrilling. Seriously! We I was giddy with excitement as we crossed. And I was so surprised at just massive, absolutely huge it was!

Originally thought to be un-buildable because of the foggy weather, the 60+ mph winds, and strong ocean currents, construction began in 1933 and took four years to complete. It also took $35 million and the lives of eleven men. The bridge spans 1.2 miles and was painted International Orange which was thought to blend well with the natural surroundings. To give you an idea of the girth, the bridge sways 27 feet to put up with wind conditions. The two large cables on either side contain 80,000 miles of steel wire (enough to circle the equator three times). Above the six lanes of car traffic there are walking/bicycle pathways on each side that offer great views of the city and Alcatraz. And despite all of this information, you just have to see of the two great towers to really get an idea of how big it is.

Once across, we pulled to the Vista Point with the rest of the gawkers to snap a few pictures. 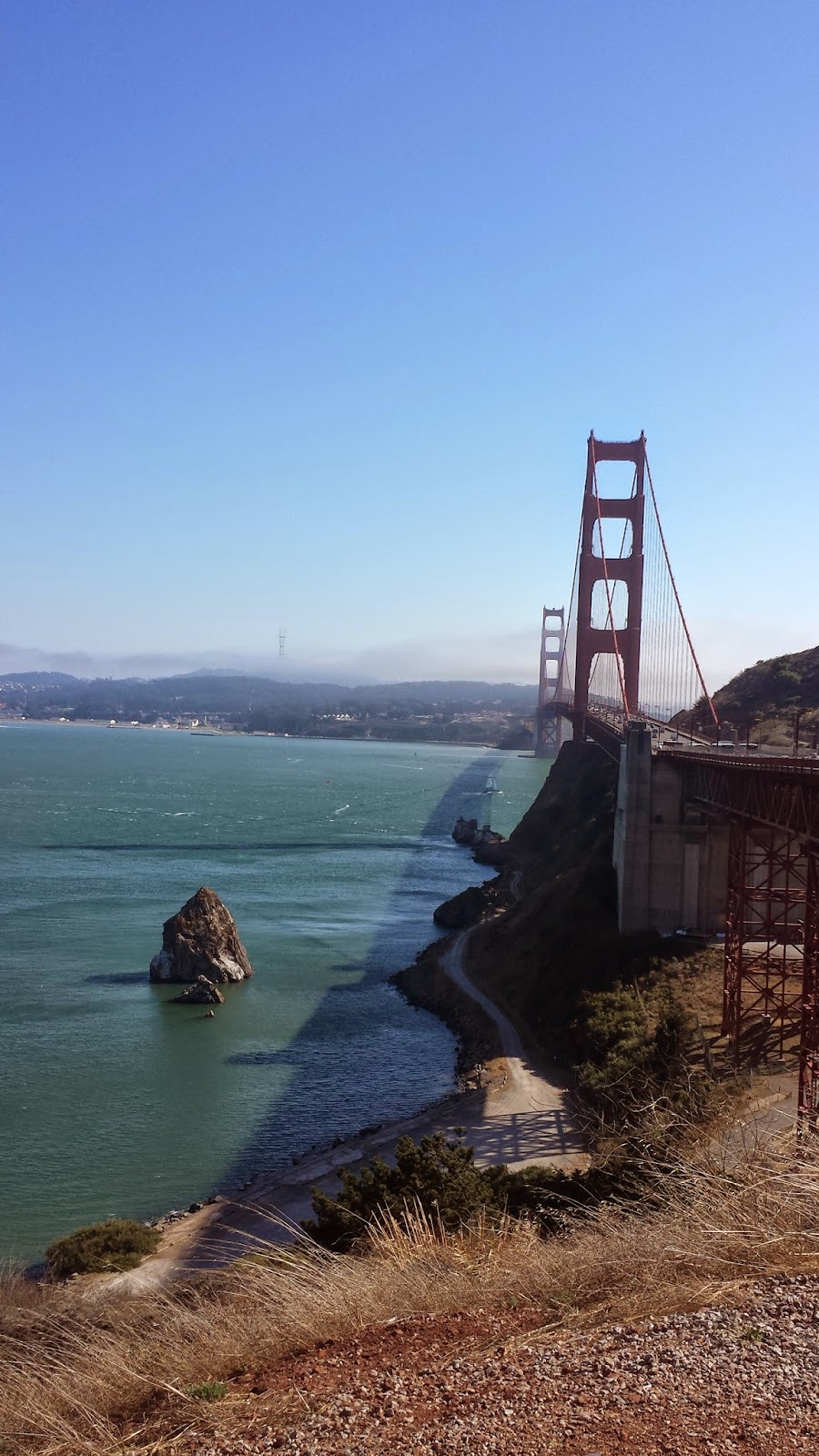 Then we proceed to the Marin Headlands to get a higher view, avoid the crowds and generally explore the area. Known for some amazing views and great trails we had noted this was an area we would want to explore before coming out. We started up the hill and pulled off along away at a few different vantage points. The higher we climbed the colder and windier it became. Evident by this family snapshot we took near the top. 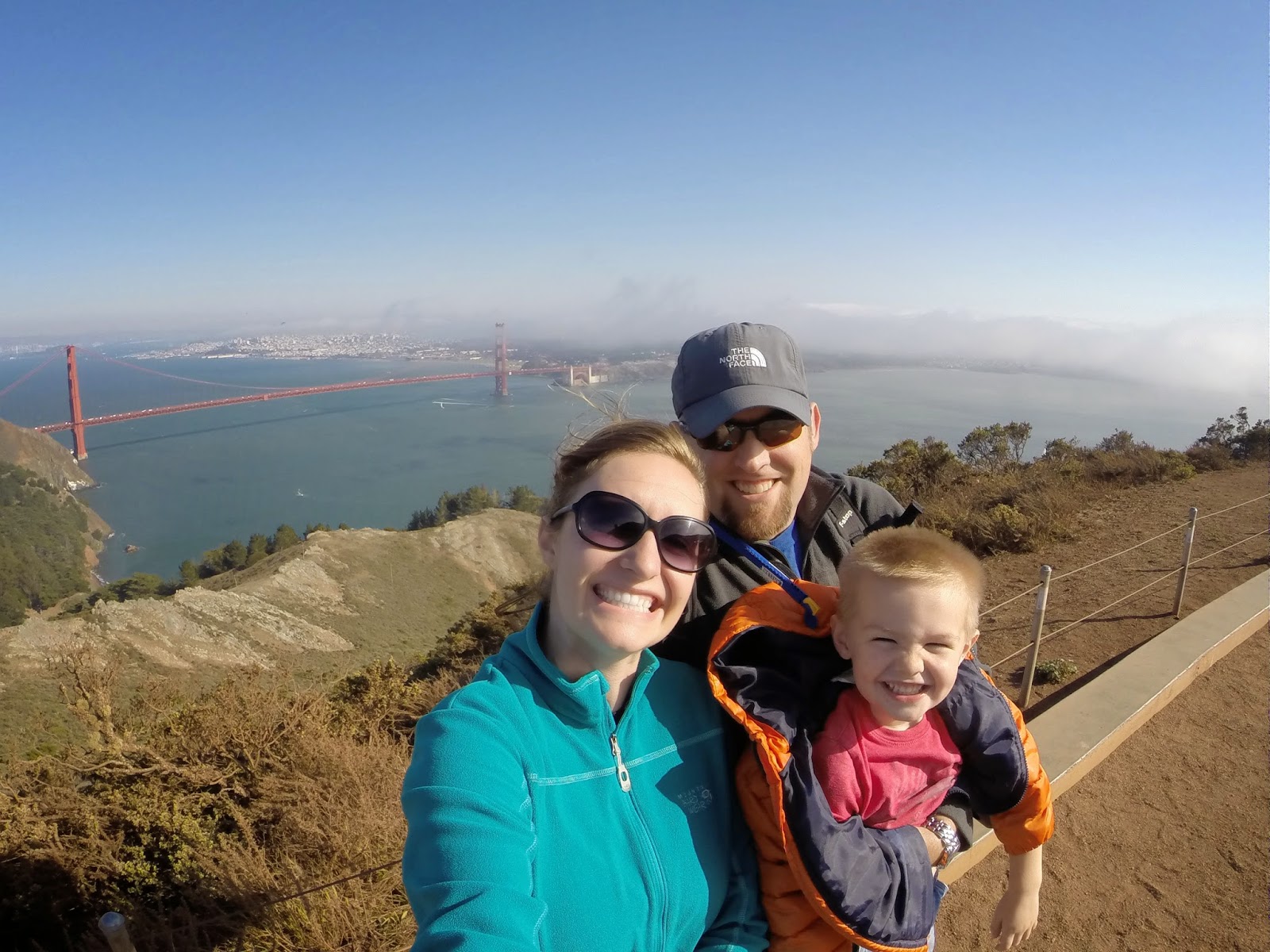 And once you reach the top, there is only way to go, back down. 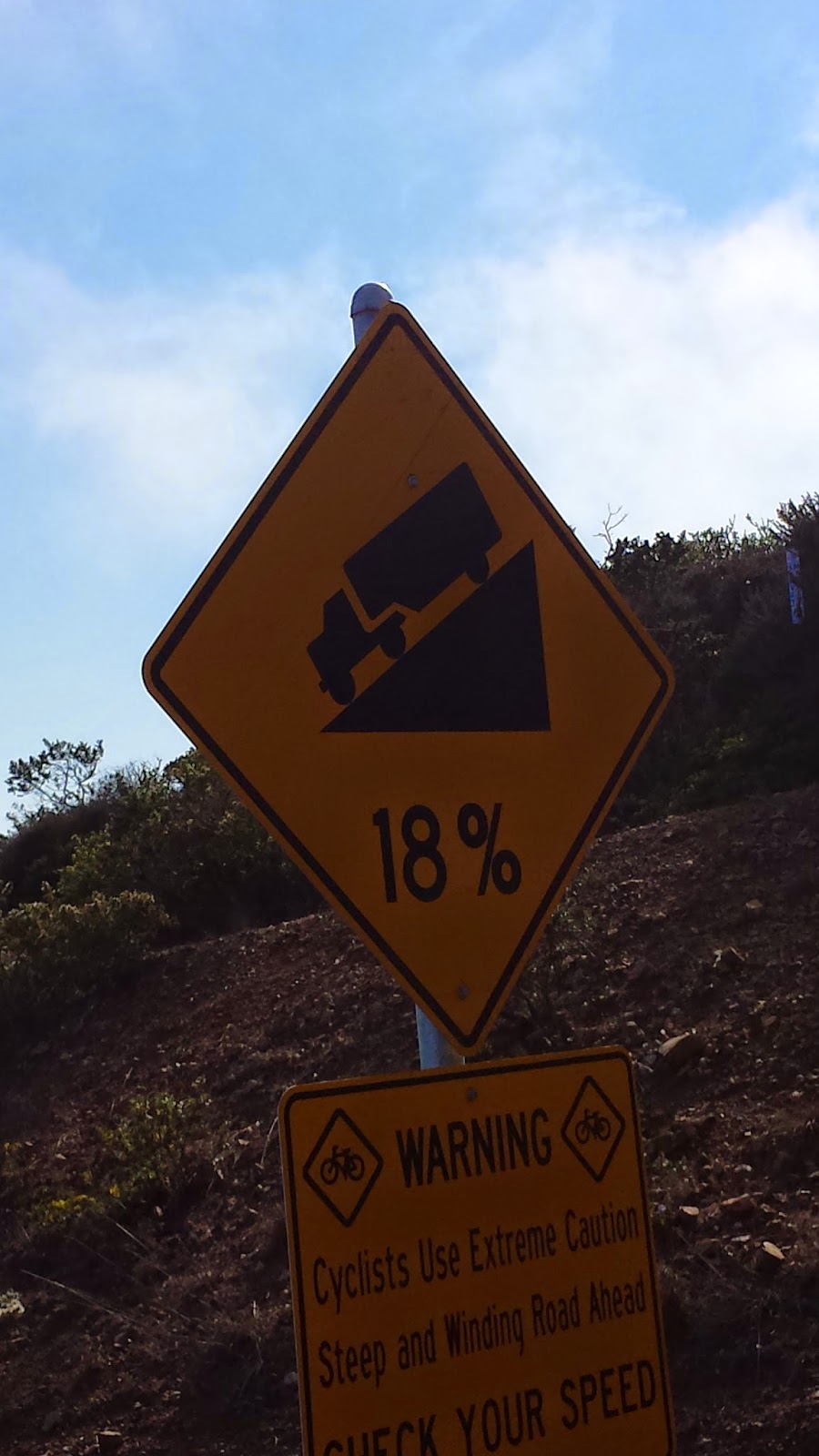 We slowly climbed down and around the area and as we snaked further away a new stunning sight opened it before us. 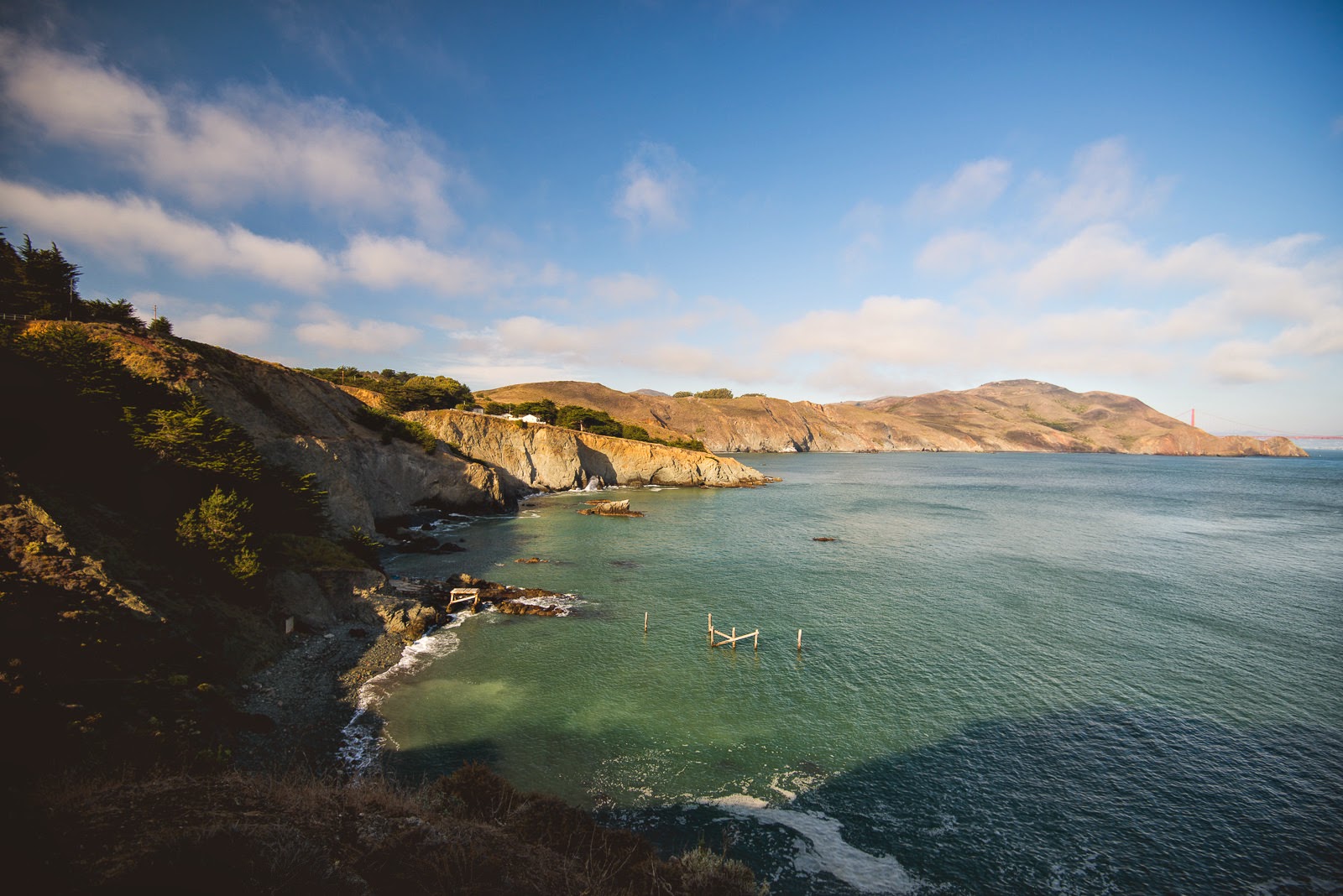 We could see seals in the water below, but because of timing were not able to hike down to get close enough to take pictures of them. The lighthouse in the area was also closed, but we knew this was a place we'd be visiting again so we didn't cry too much. We did take a short hike out near the lighthouse to capture a big picture of the bridge with the panoramic view.

Then we continued around on the one way road. Once used as a military settlement and fortification, there are a number of bunkers, batteries, and military observation sights along the way. There is also the remains of an old fort and an old Nike Missile launch pad. Basically, a ton of places for my boys to explore in the future. As a bonus, there is some camping available which is something we will have to do in the future as well. As we came across the backside we encountered the most stunning beach. 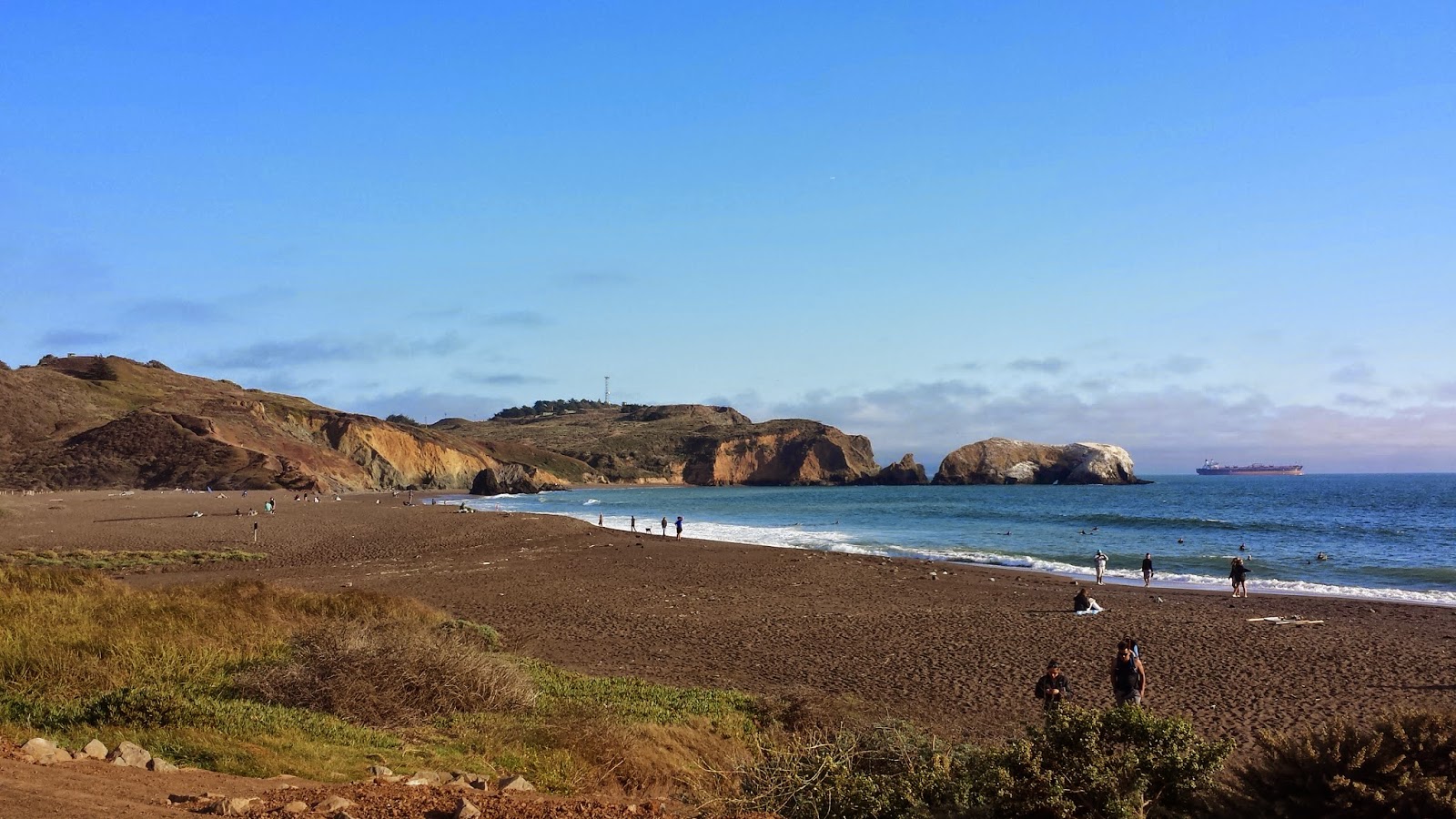 Seemingly uncrowded, we made a note to add this beach to our future beach places. Before heading back across the bridge we made one last stop at Fort Point for a different view of the bridge from the pier below. 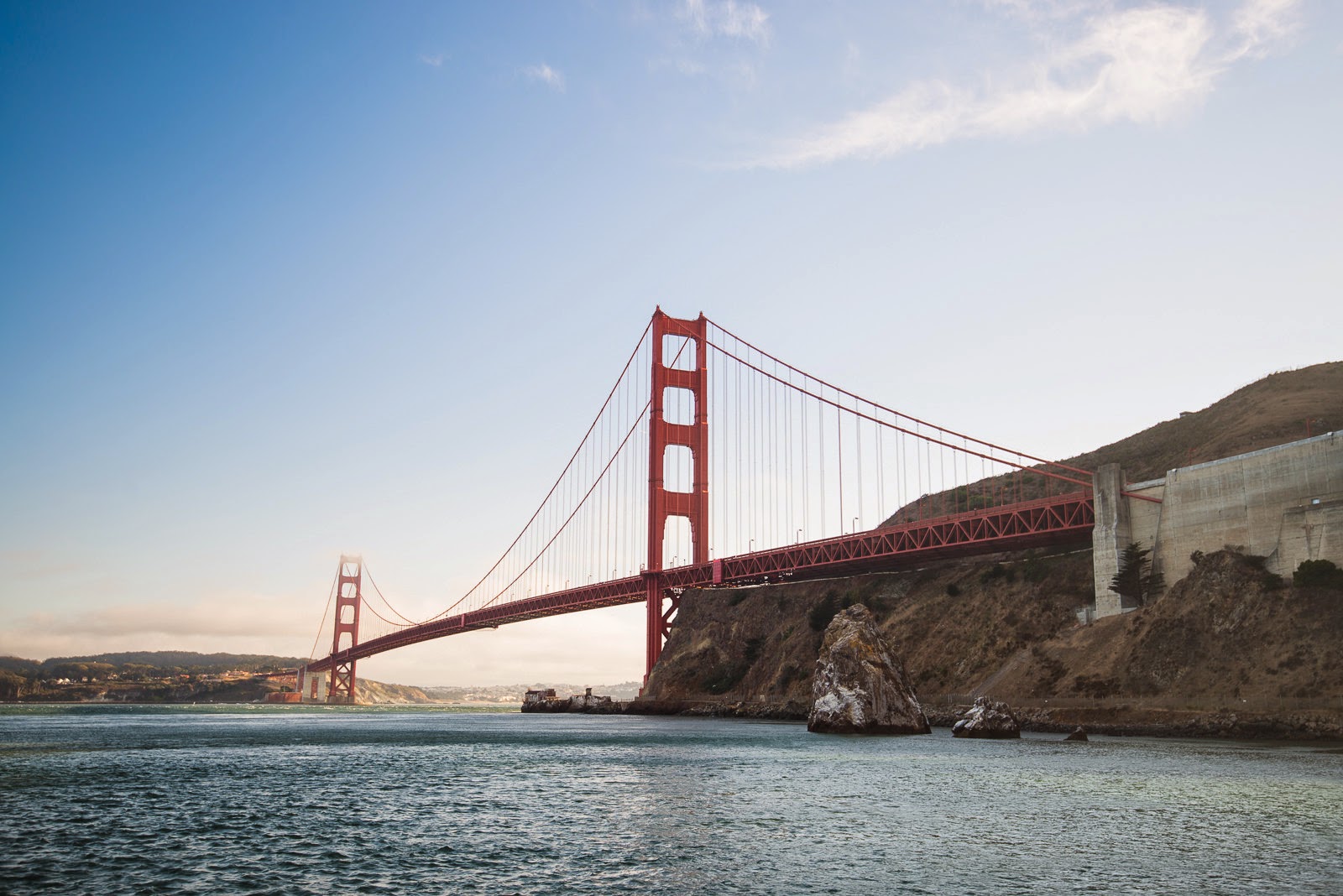 BEAUTIFUL is all I can say! So pretty indeed that we asked someone to take our picture. 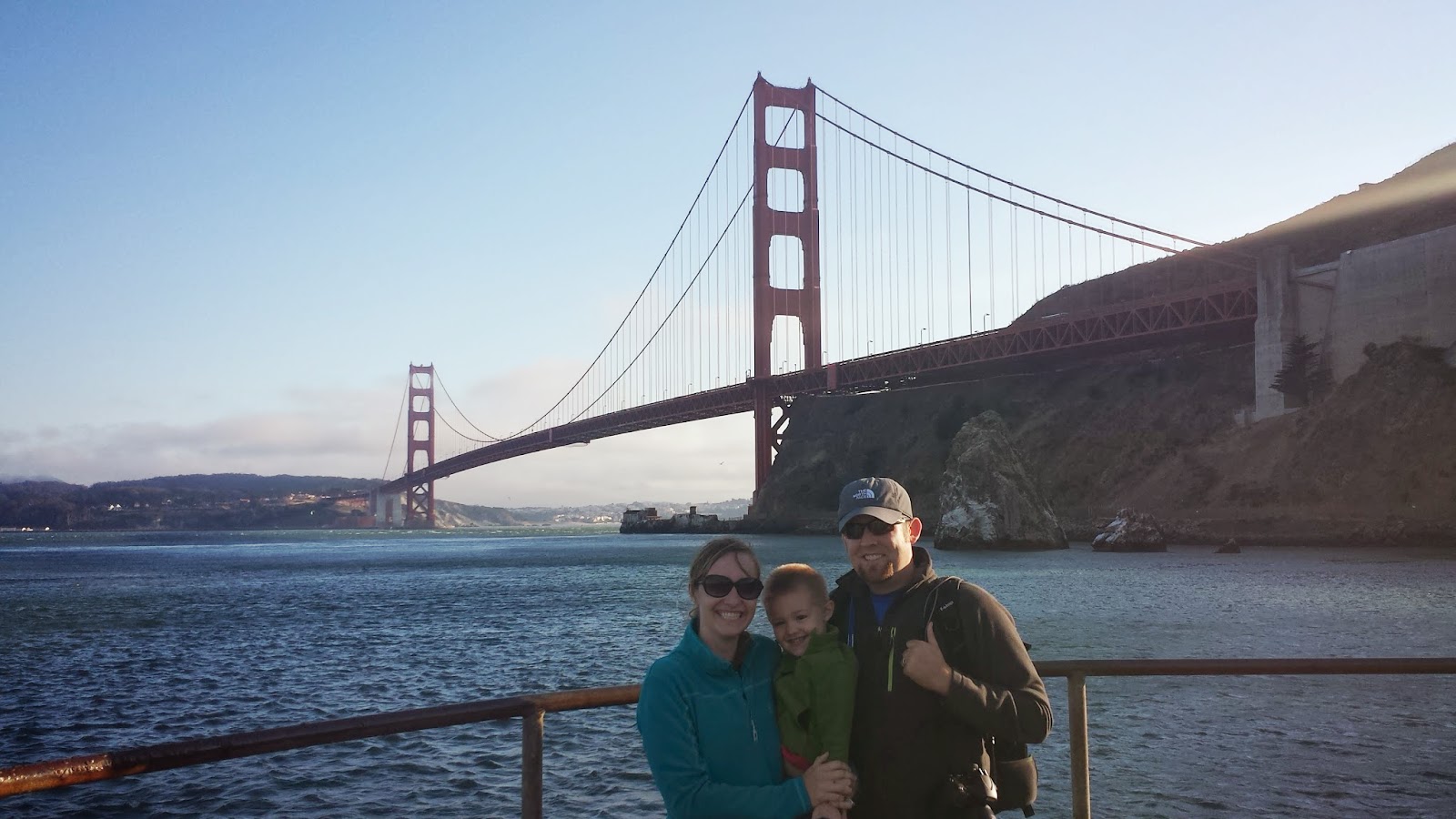 So as the sun was setting we headed back across the bridge for our final night in a hotel as a transient family on the move. The following day, we would settle into our semi-permanent home and start to get a since of normality to our lives again. Although we were not able to do so right away, I really enjoyed out first "excursion" in San Francisco. The San Francisco Bridge is an iconic symbol of the city and it was right up our alley to be able to spend our first hours enjoying the city outside and enjoying nature too.

And just incase you didn't get enough of the bridge we took a video going across. Here's a feel of what it is like to cross this bad boy.