Day 1 technically started when Kaiser and I arrived at Dad’s early into Saturday morning. With a car packed to the brim with stuff and a shedding German Shepherd (which Adam says is redundant) as a co-pilot it was the longest 3 hour drive of my life. 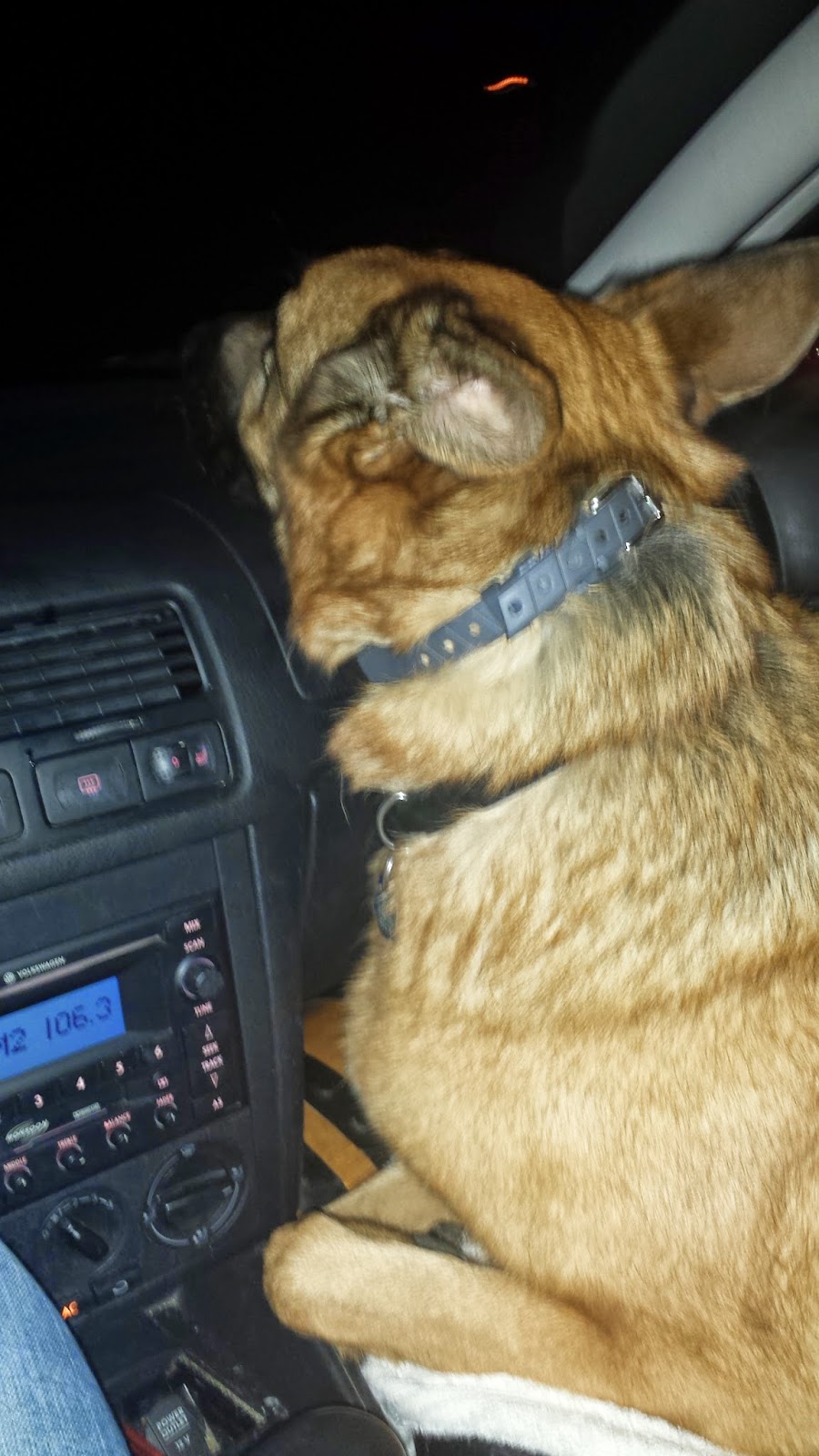 When we finally arrived exhausted, we quickly made our way up to our old apartment for the night hoping to get a good rest before the real journey began. Despite waking up at 8 AM on Saturday morning we didn’t actually pull out of the driveway until 2:26 PM, about 5 hours later than we anticipated.


Friday, upon arriving in Kentucky, Adam realized that most of the lights on the trailer were not working. Instead of spending the next 5 days worried about a car ramming into the back of us, he decided it would be best to swap it out with another one. With the help of my Dad and brother, they unloaded the entire trailer into the garage. 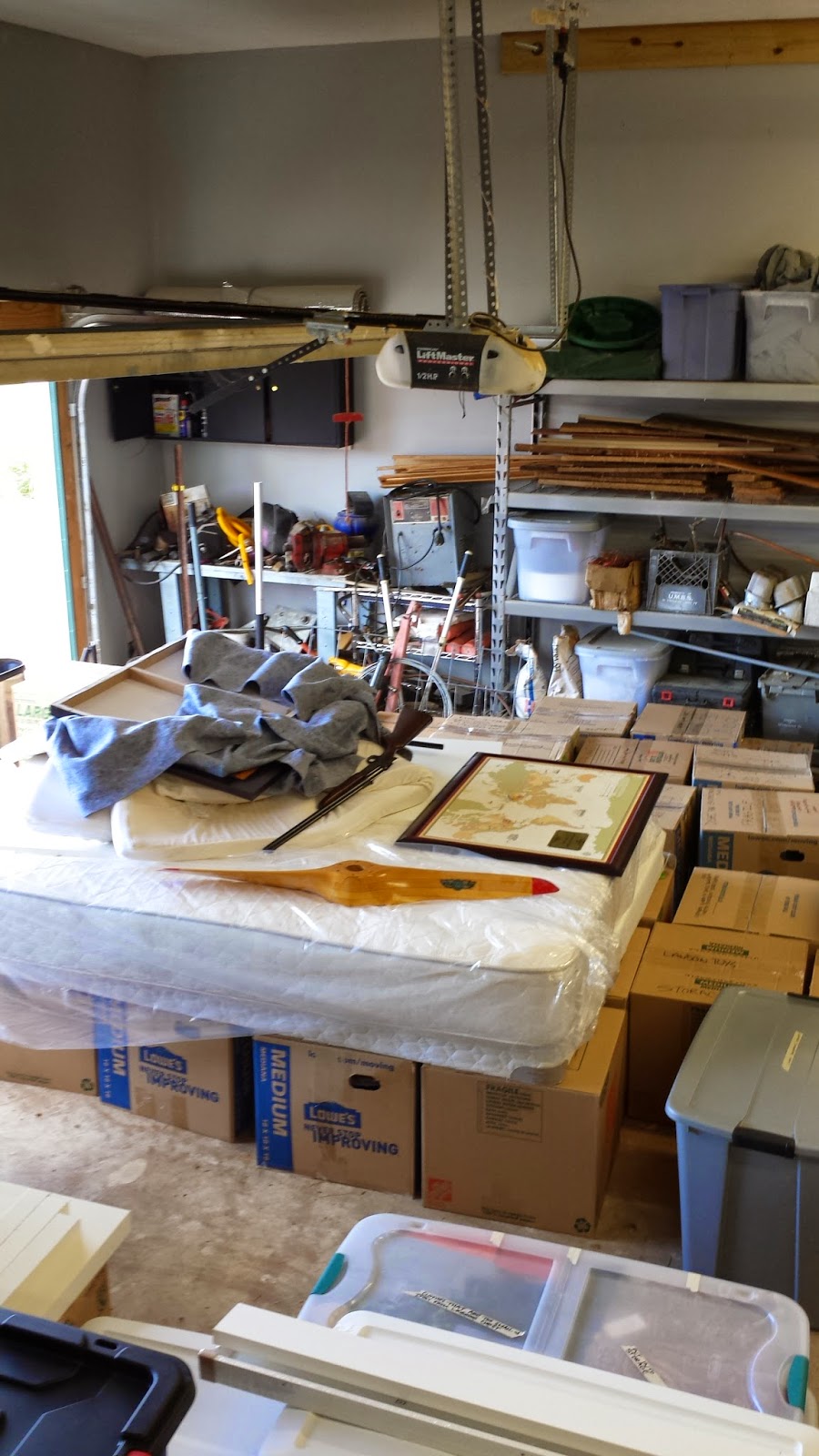 As much we were not excited about having to load the entire trailer again, it was good to have the opportunity to fit in all the rest of the stuff from my car. Adam ended up having to take the trailer an hour away to get the wiring fixed. On the way, while driving on the interstate, in downtown Louisville, at 65 mph, the unloaded trailer became unhitched and started to swing uncontrollably with only the chains holding it on. By the grace of God, he was able to come to a stop and rehook it. While the trailer did slam into the back of our car, it only left a minor scratch on our bumper and, most importantly, no one was hurt. He made it to the U-Haul service center where they diagnosed the problem and fixed it. By noon, he was back and we were ready to start loading. FINALLY, at 2:30 we were on the road. 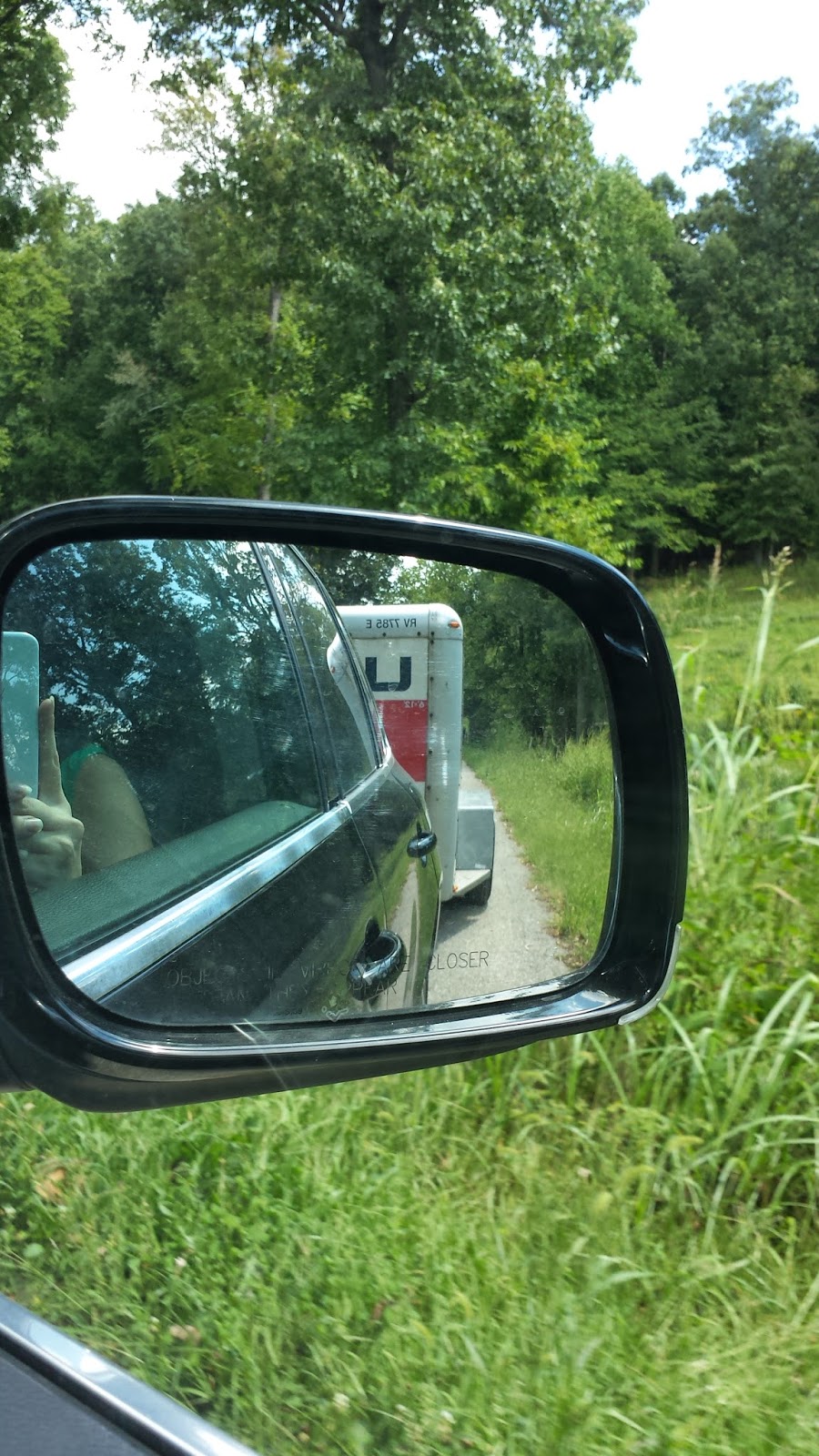 The drive to St. Louis is one we’ve made a number times given that Adam’s uncle lives on the outskirts. To pass the time on the 10 hour drive, I tried to explain to Landon that the cows in the trucks we were passing were going to the butcher to become hamburgers. Given the fact that he still struggles to understand that cows eat hay and that hay is dried grass, the whole animals-becoming-food concept is still just too advanced. Eventually, Adam just told him that cows are full of hamburgers and that the ones we passed on the road were having their hamburgers taken out of them. He was very concerned as to whether or not they had mustard as well, because he doesn’t like mustard.

Once outside of St. Louis we passed a sign for 'historic' Ferguson, MO. Adam mentioned we should have tried to take a picture of it and my first thought was that I would try and remember to do it on our way back… I’ve said many times that this move hasn’t fully set in and despite already leaving Nashville, selling all our furniture, and practically living out of car right now, in some ways it still hasn’t.

Around 1 am we passed through Kansas City which is the strangest city I’ve been through. Split between two states (Missouri and Kansas), I’m still confused as to why it isn’t called Missouri City as it seems most of the actual downtown is actually in Missouri. Adam thought it was pretty neat to pass the Royals Stadium and the building for their newspaper is all glass located right next to the expressway which means we got a glimpse of their printing process as we passed. Not long outside of Kansas City, I passed out. As hard as I tried not to fall asleep on the captain, the ride was just too boring and I couldn't fight it any longer.

We stayed the night at the Ramada in Kansas City which was nice enough, but of course the exit to get there was inexplicably closed. After a very unplanned and death defying delay earlier in the day, we were happy to have an uneventful drive to Topeka and end our first day. 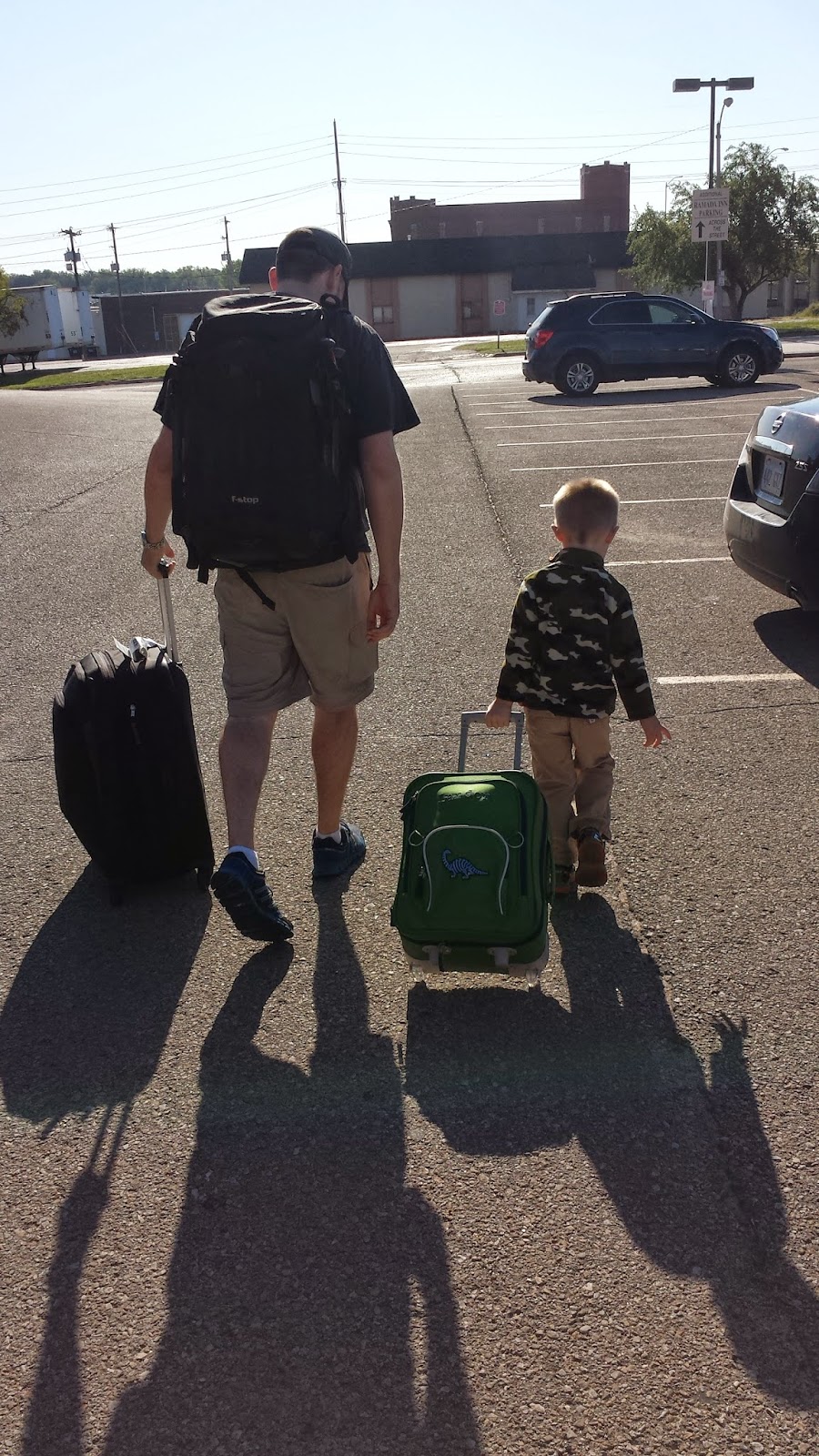 After a short, but restful night’s sleep, we all took advantage of the luxury of a shower, which we will not have for the next two nights, we got dressed and headed out. Our goal was 9am, but we were on the road just after 9:30. A big improvement from yesterday! From Topeka to the border of Colorado was 362 miles which we had heard would be the most boring miles ever.

We were both surprised at the beginning of the day that Kansas had rolling hills. It was definitely a drier climate than we had ever experienced before, but not quite as flat as either of us expected. The state, which we drove the entire length of, is all farm land. The trees are sparse and the ground is dry, but it 's pretty in its own way.  Our only planned stop for the day was about an hour outside of Topeka at an atomic gun that was built during the cold war to shoot a nuclear weapon. With only three left on display, we thought it would be pretty neat to see. Unfortunately, as we followed google maps to the location, the road was closed and we couldn’t go any further. We know people have visited the gun recently from comments on a Roadtripers app we are using, but for whatever reason visiting it was out of the question for us. So we got back on the highway and continued our journey.
After a few hours in the car we came across the windmill farms. Although we don’t think windmills are necessarily a good energy investment, they do make for a pretty neat scene. The arms of the fans are amazingly huge and seeing a hundred or so of them rotating all at the same time is pretty spectacular. 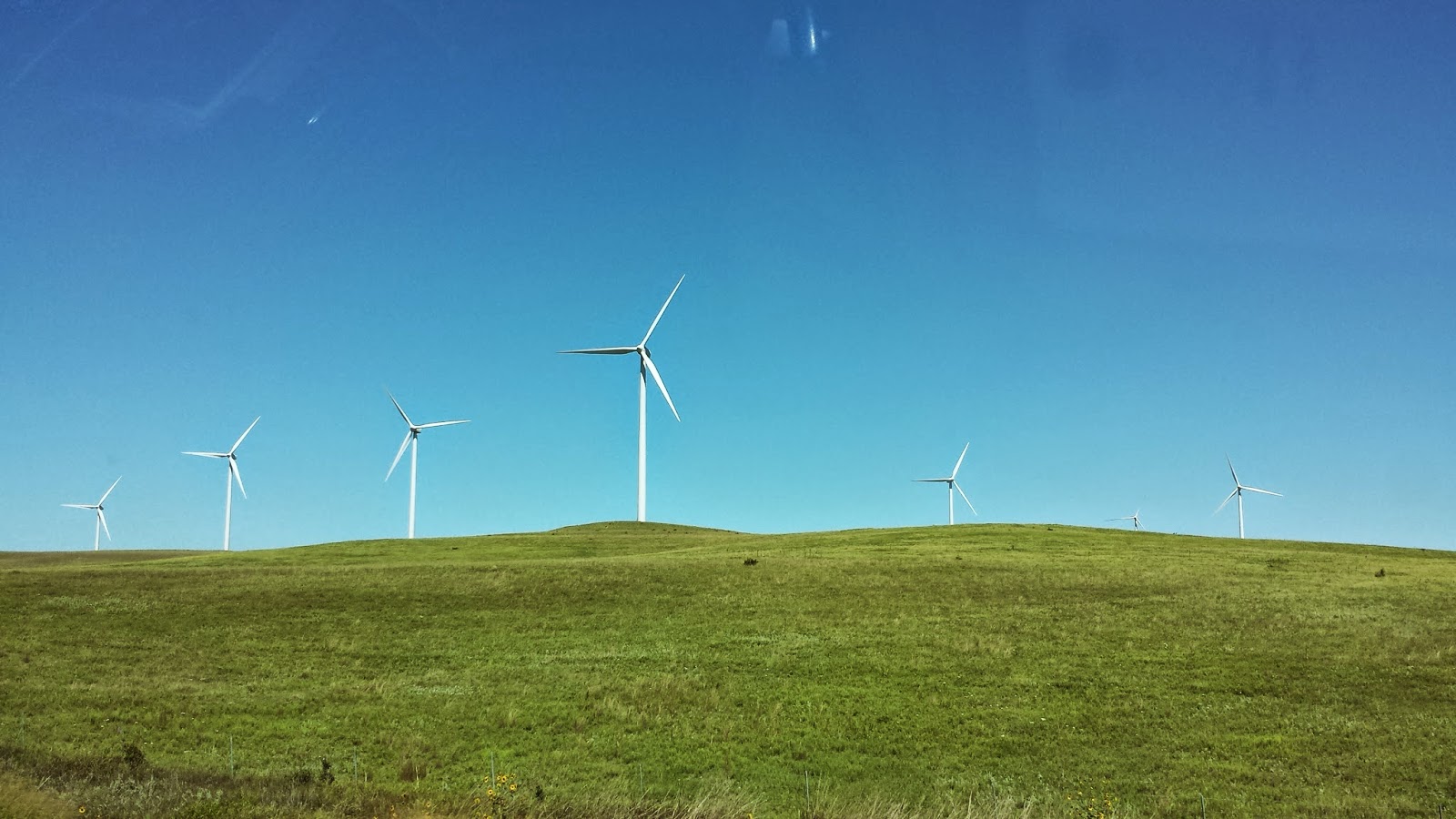 The area of Kansas in which the windmills begin looks exactly the Kansas depicted in the Wizard of Oz. As we passed these century old looking farmhouses with ancient windmills in front I could help but try to find Aunty Em’s house.

Since our first stop from Roadtrippers failed we decided to make a stop at The Cathedral of the Plains which is really The Basilica of St. Fidelis. The only basilica in Kansas, this imposing church whose towers are just barely visible from the interstate makes quite an impression in the midst of the plains. 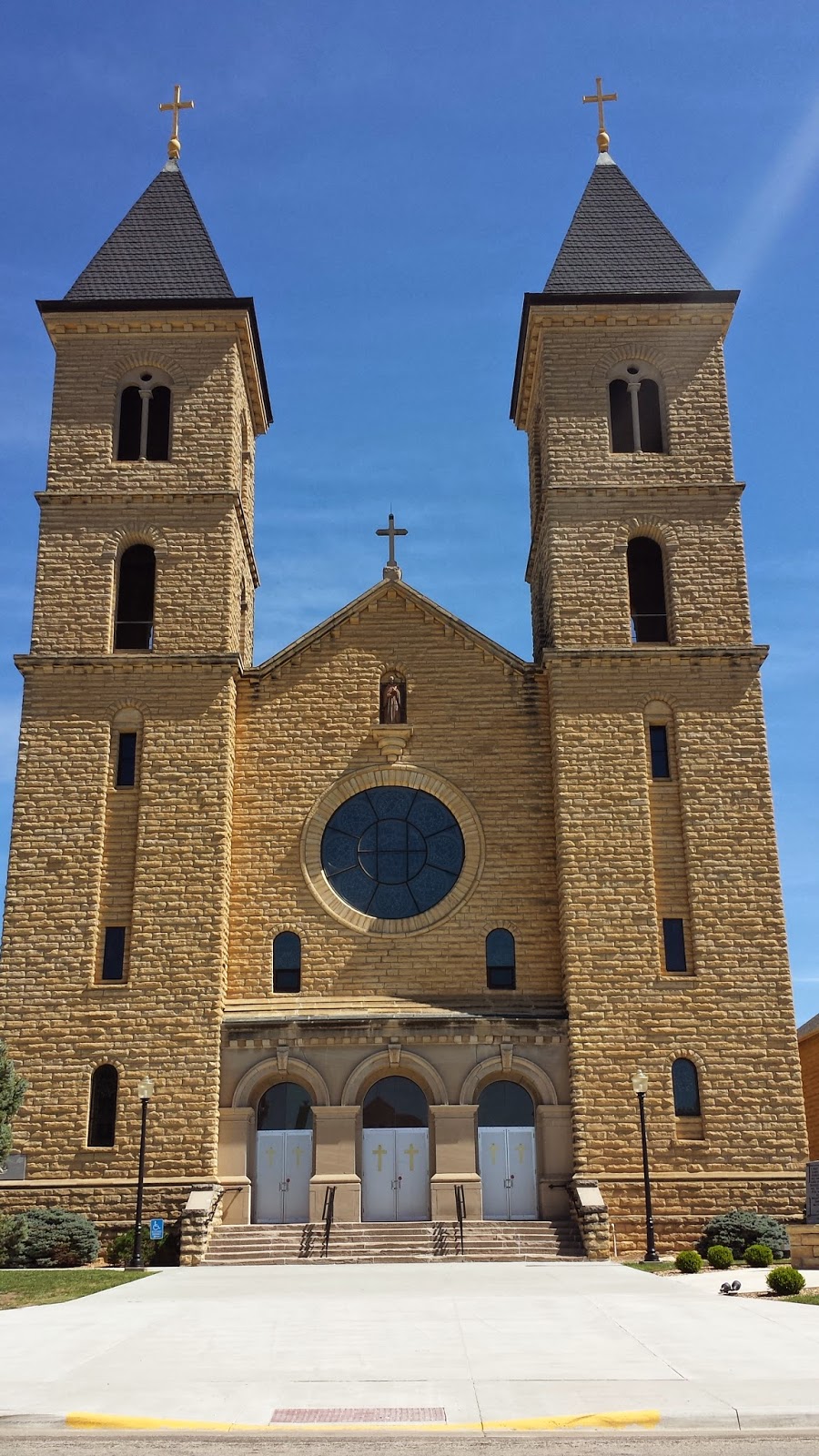 Construction on the current church started in 1908 and was finished in 1911. Imagining how a church of this size and magnitude was able to be constructed at the turn of the 20th Century adds to the impressiveness. The fourteen granite pillars took 40 men just to move off the train and onto a farm machine which then took a team of eight horses to pull it each one to the site. 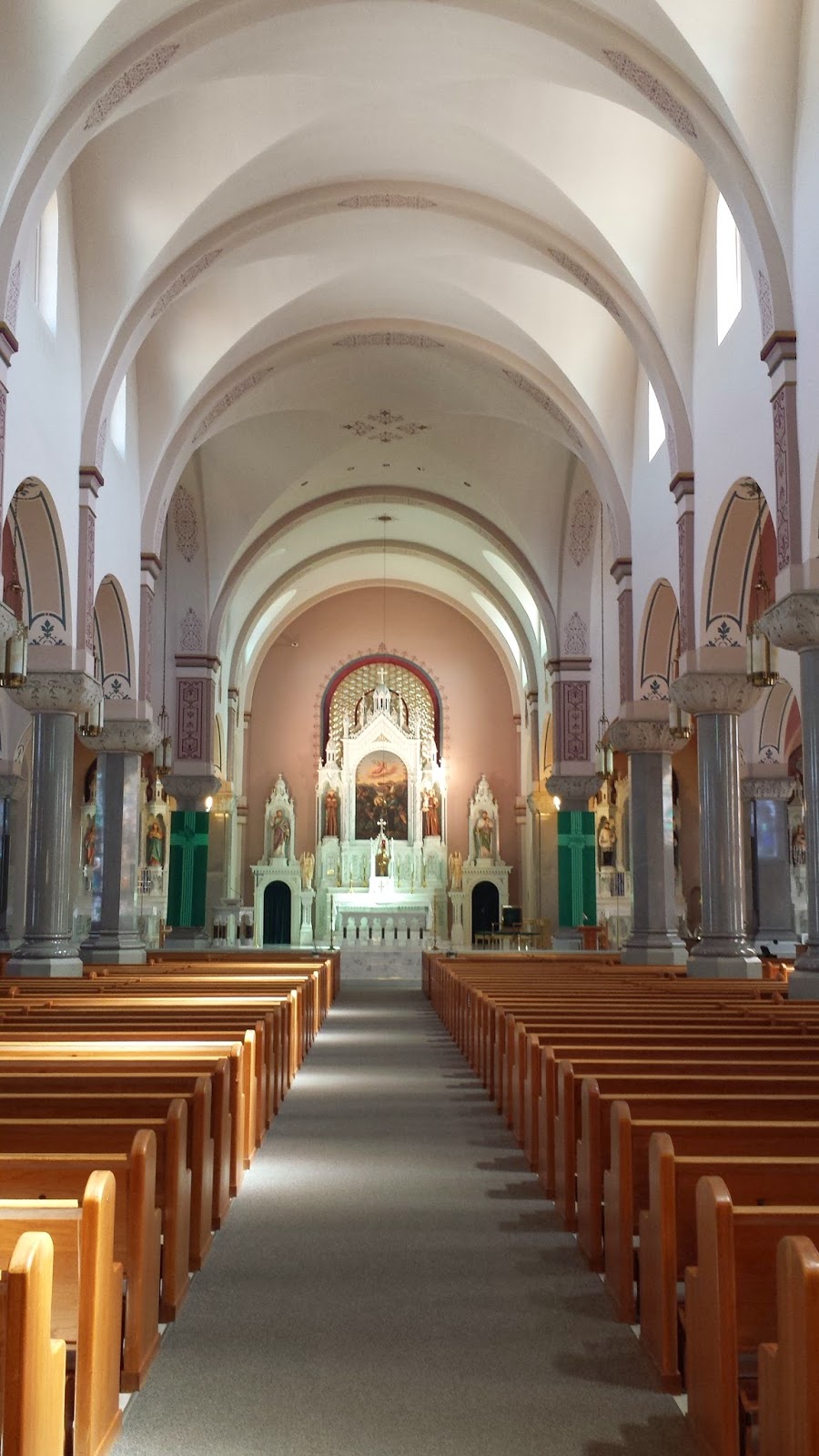 After a good look around the church, we were back in the car anxious to make it to Colorado. And eventually we did. 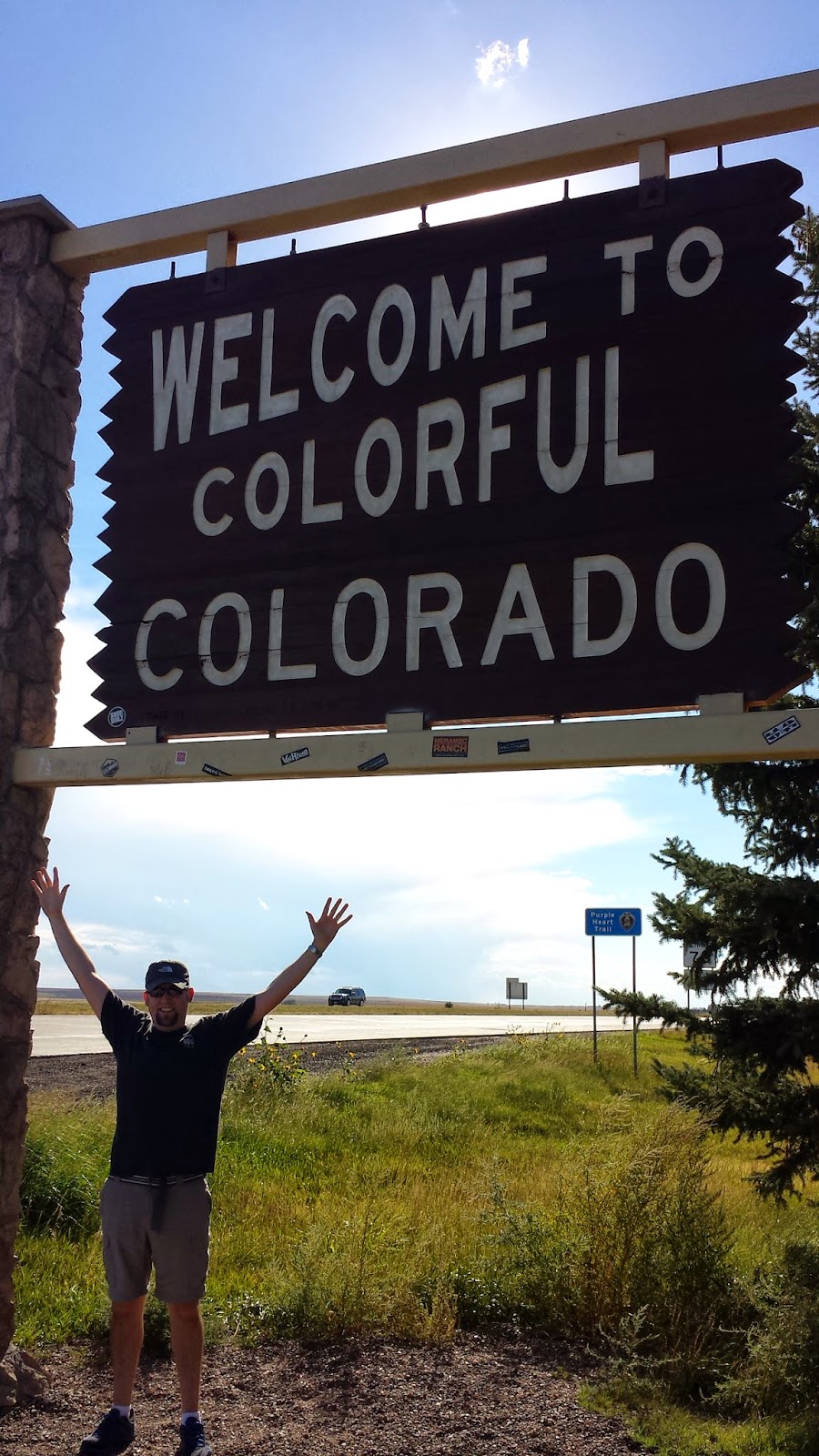 Once we finally made it into Colorado we realized that it wasn’t much different from Kansas. One thing Adam noted about Kansas, is that while a good portion of it is flat, it is a constant steady climb uphill. When we entered Colorado we were already a mile above sea level. If anything, for awhile, Colorado may even have been flatter than Kansas. It was less than hour outside of Denver when we could finally make out the Mountains in the background. 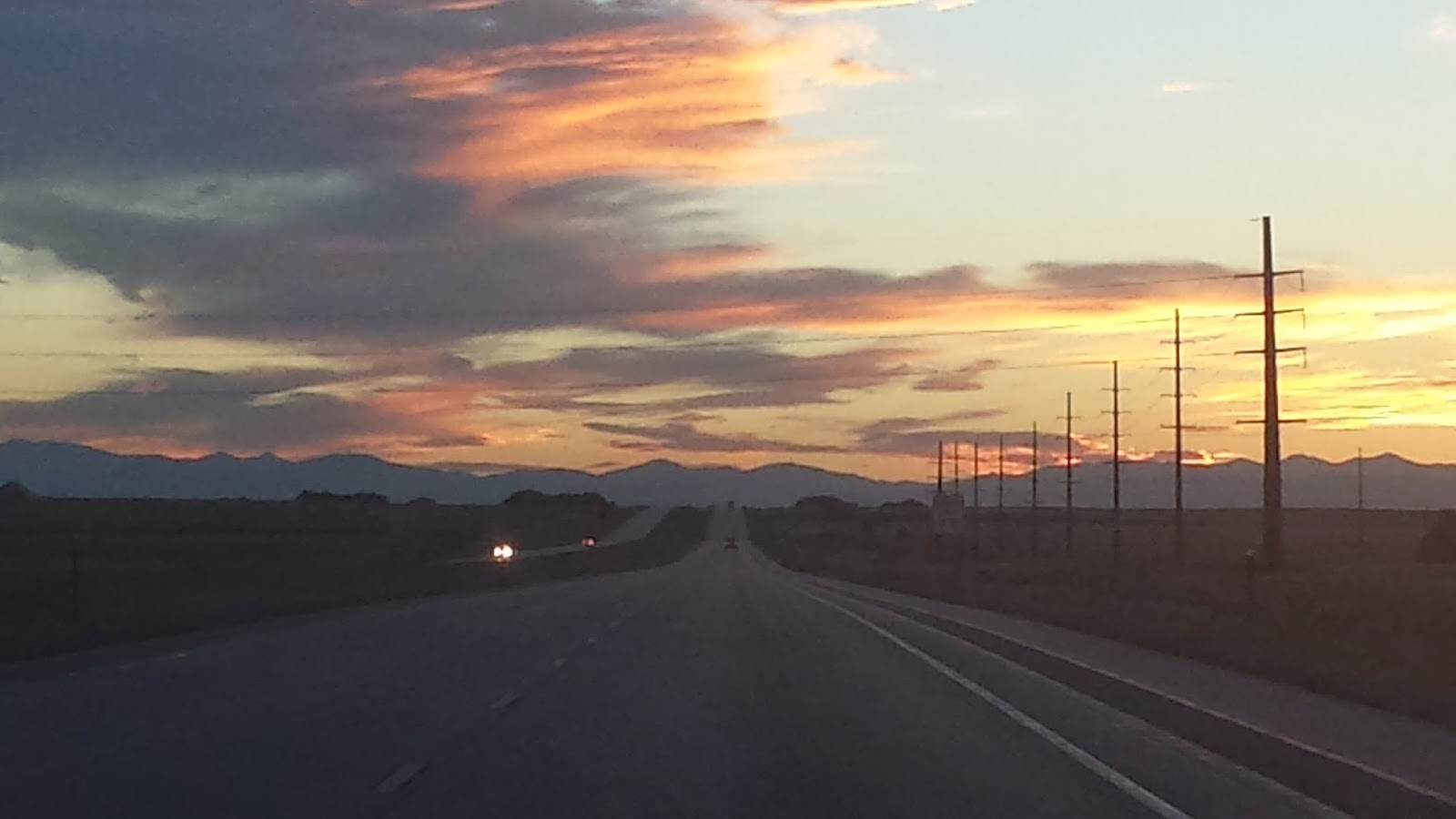 By that time, the sun was starting to set and due to our slowed pace we knew we wouldn't arriving at our next stopping point until it was dark. Had we been staying at another Ramada, we wouldn’t have minded, but tonight we were camping at Golden Gate Caynon State Park and we were really looking forward to seeing the park and the Mountains. Just outside of Denver the climb began. We climbed almost 3000 feet very quickly and given our load it was the only part of the trip Adam was somewhat concerned about. But, we made it just fine and once we pulled off the interstate and toward the park, it was obvious that we had reached the part of the trip we were looking forward to. The only problem is, it was too dark to really see anything. The Rocky Mountains were beginning to soar overhead and the smell of evergreens began to make its way into the car. We had a steep climb up to the state park and in the middle of the wilderness it opened up into a bright shiny Mountain town packed with Casino after Casino. 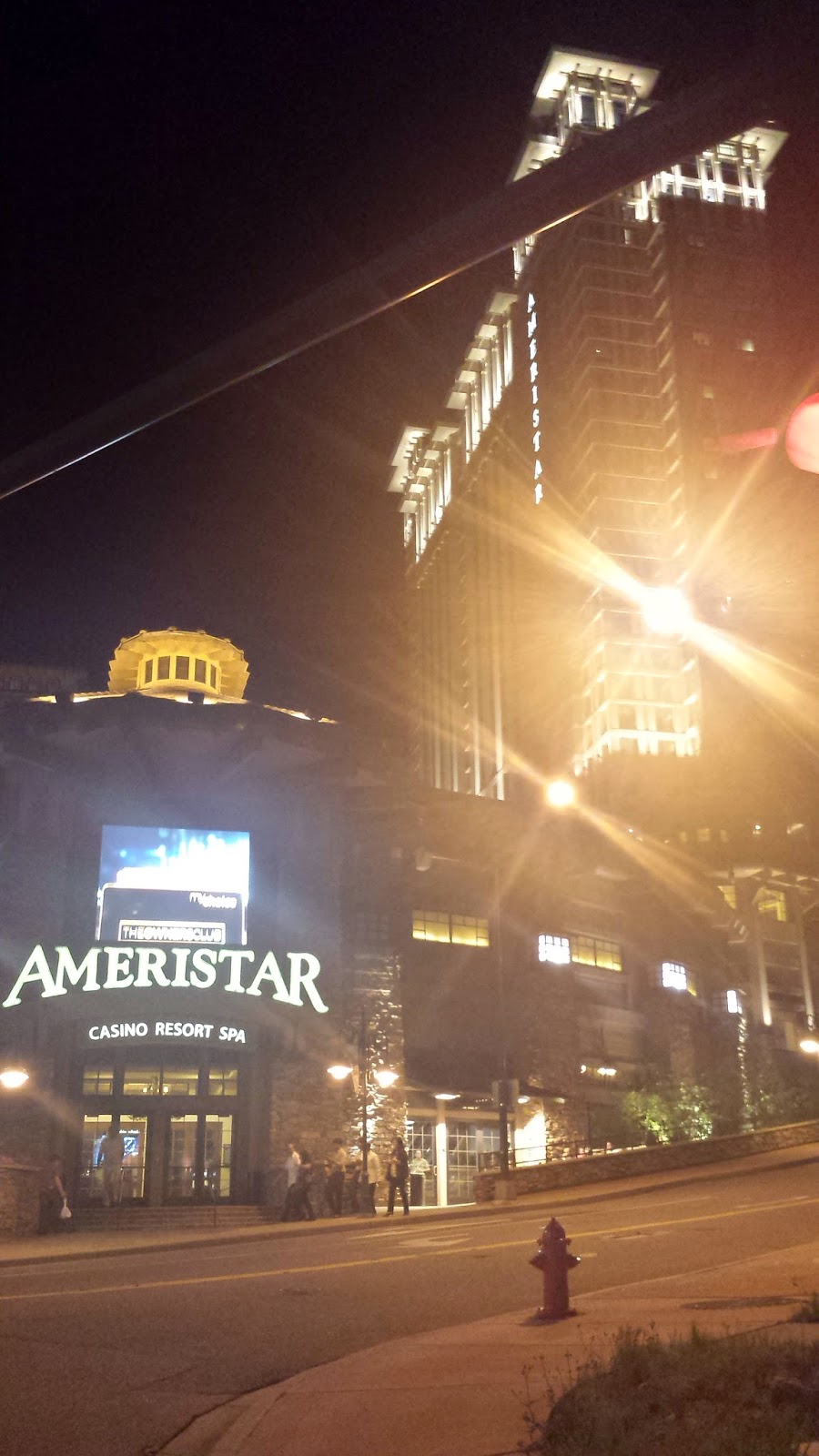 Knowing very little about this area it took us both by surprise. The town, which I will have to read more about later is called Black Hawk and we are pretty confident that is ran in some form by Native Americans. We passed through the lights and back into the wilderness coming to our campsite around 9pm. It was chilly up in the Mountains mainly due to the fact that we were camping at 9,200 feet. By the time we arrived, Landon had already fallen asleep in the car and so when we first woke him up he was not all too happy. We unloaded all our camping supplies, found our pad, and set up for the night. This was Landon’s first time camping outside of the house and once he woke up he was pretty jazzed about the whole thing. Despite having his own race car rent, we decided it wasn’t a good idea to let a three year old sleep alone so the three of us piled into our tent and settled in for the night. Excited for what the next few days had to offer.
Posted by Unknown at 11:01 PM