Day 4. When we woke up we checked the weather on our phones and since it was raining we decided we should skip the Antelope Slot Canyon Tour and go straight to the Grand Canyon. But, just before we left the room Adam opened up the window only to find out it wasn't actually raining. Who would have thought to not trust technology and just look out a window for the weather? The clouds did look a little ominous, but the slot canyons were something I've wanted to see for a long time so we decided to at least drive out to the area and see what the tour company had to say. Regardless of the results, we were excited to see what the day would hold! 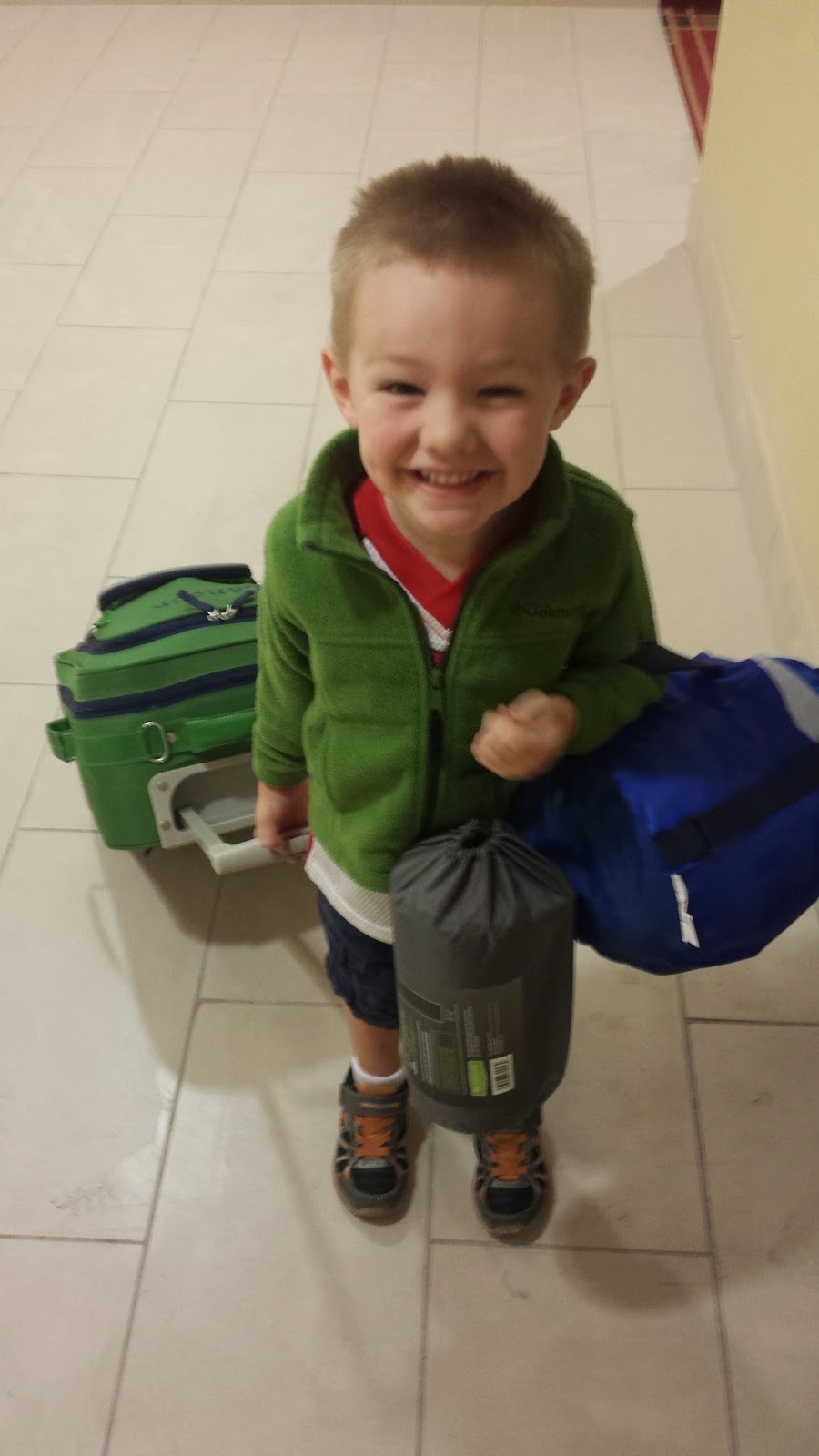 While we knew the light coming into the canyon wouldn't be the stark rays that make the canyon famous, I was still very excited when I found out the tours were still going (at least for the hour we had our reservation). At the designated time, we boarded the back of a truck with 11 other tourists and our Navajo guide drove us the three miles in the desert sand to the canyon's opening. 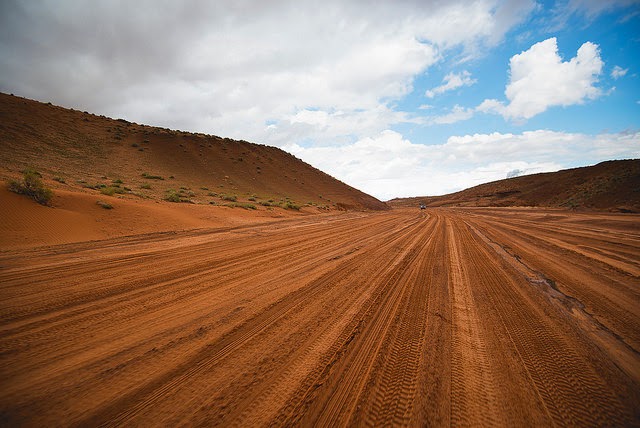 There two canyons in the area (the Upper and Lower) and we toured the Upper canyon. Known for its smaller openings and a wider base, the upper canyon is easier to maneuver throughout, but doesn't have the stunning beams of light like the Lower Canyon. Since it was overcast we didn't miss out on the beams at the lower canyons and, given the circumstances, we probably had the more enjoyable day since the wider base makes the crowds more manageable. As you walked through the canyon the opening became more and more narrow which makes for some amazing shapes, but also for a claustrophobic's worst nightmare. 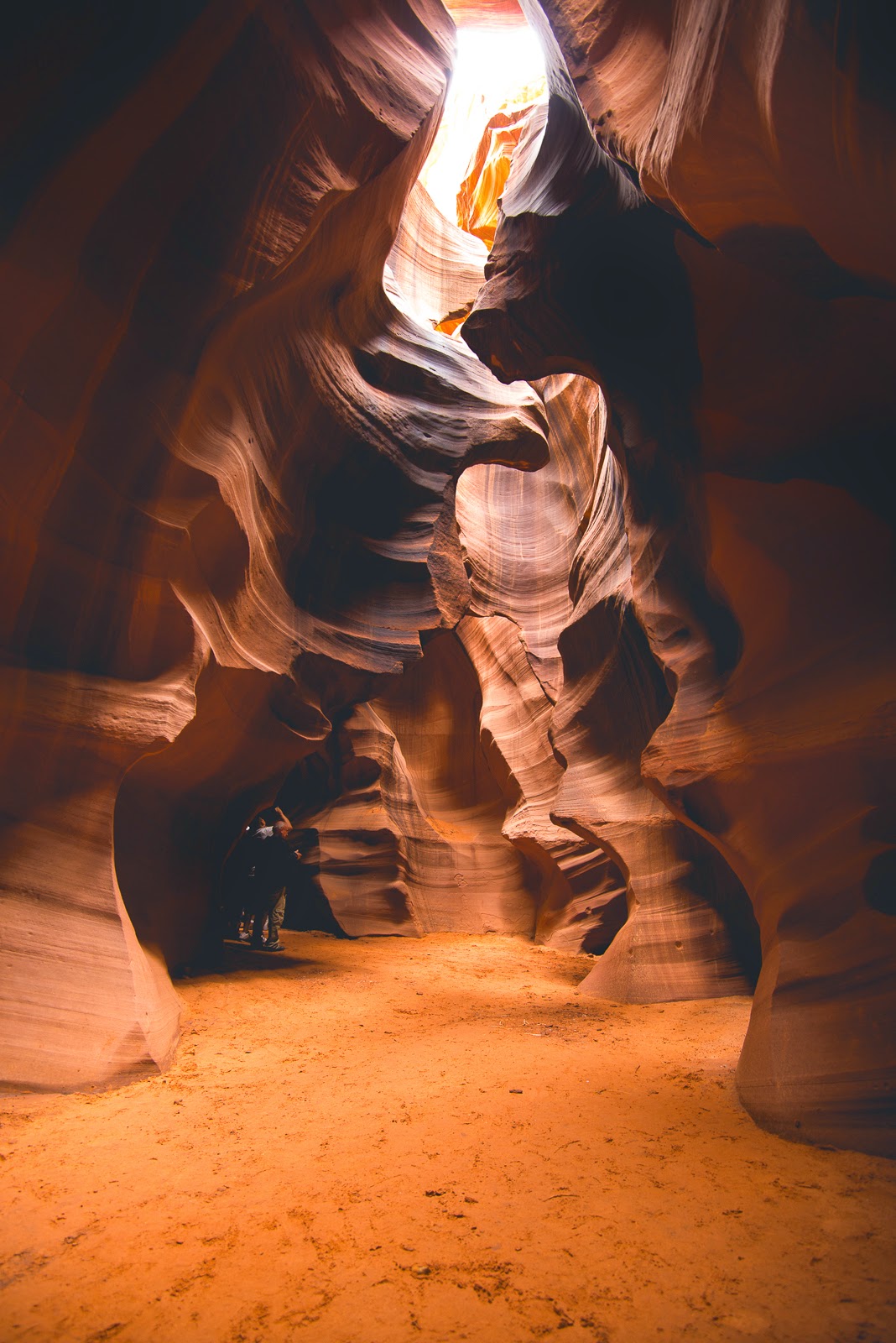 Eventually, the space becomes so narrow that it goes from the size of a large room to a small slit only big enough for one person at a time. 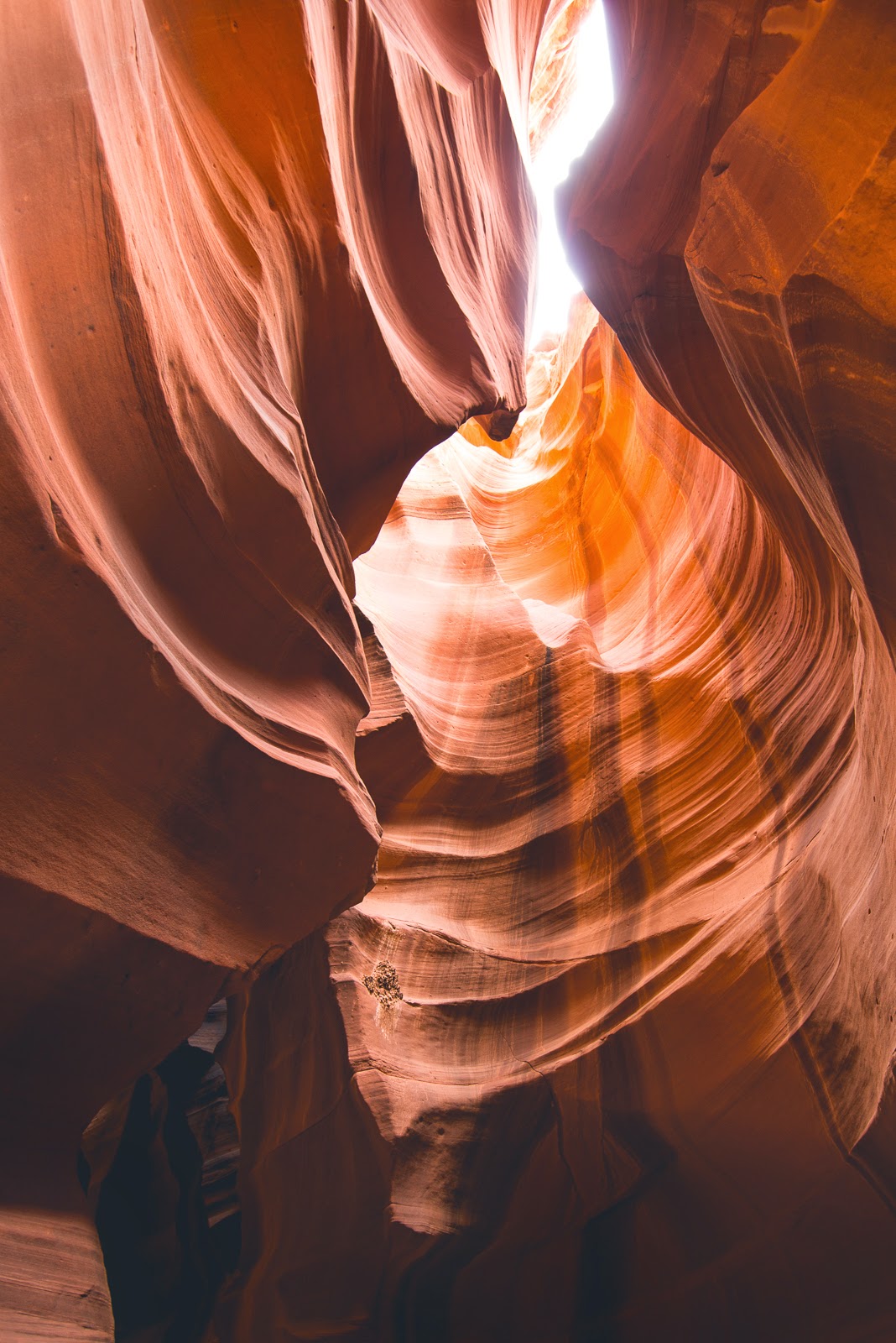 Despite not having the perfect lighting I was really excited to see this in person. It is something I have wanted to see in person for a long time and it didn't disappoint. Our guide told us that the Navajo give the tours as a way to share this sacred canyon with the rest of the world. A few years ago, National Geographic asked to film one of the yearly floods. The Navajo gave their permission, but, without telling them, National Geographic mounted three cameras into the walls of the canyons. Despite being mounted, the flood was so violent that it ripped all three cameras off the walls and they were never found. The Navajo believe that this was a sign. They view this place as very sacred and take great care that nothing or no one disturbs it. And it's true, you can't help, but feel a sense of  specter and awe inside these canyons. It almost feels like a secret world that we really shouldn't know about. 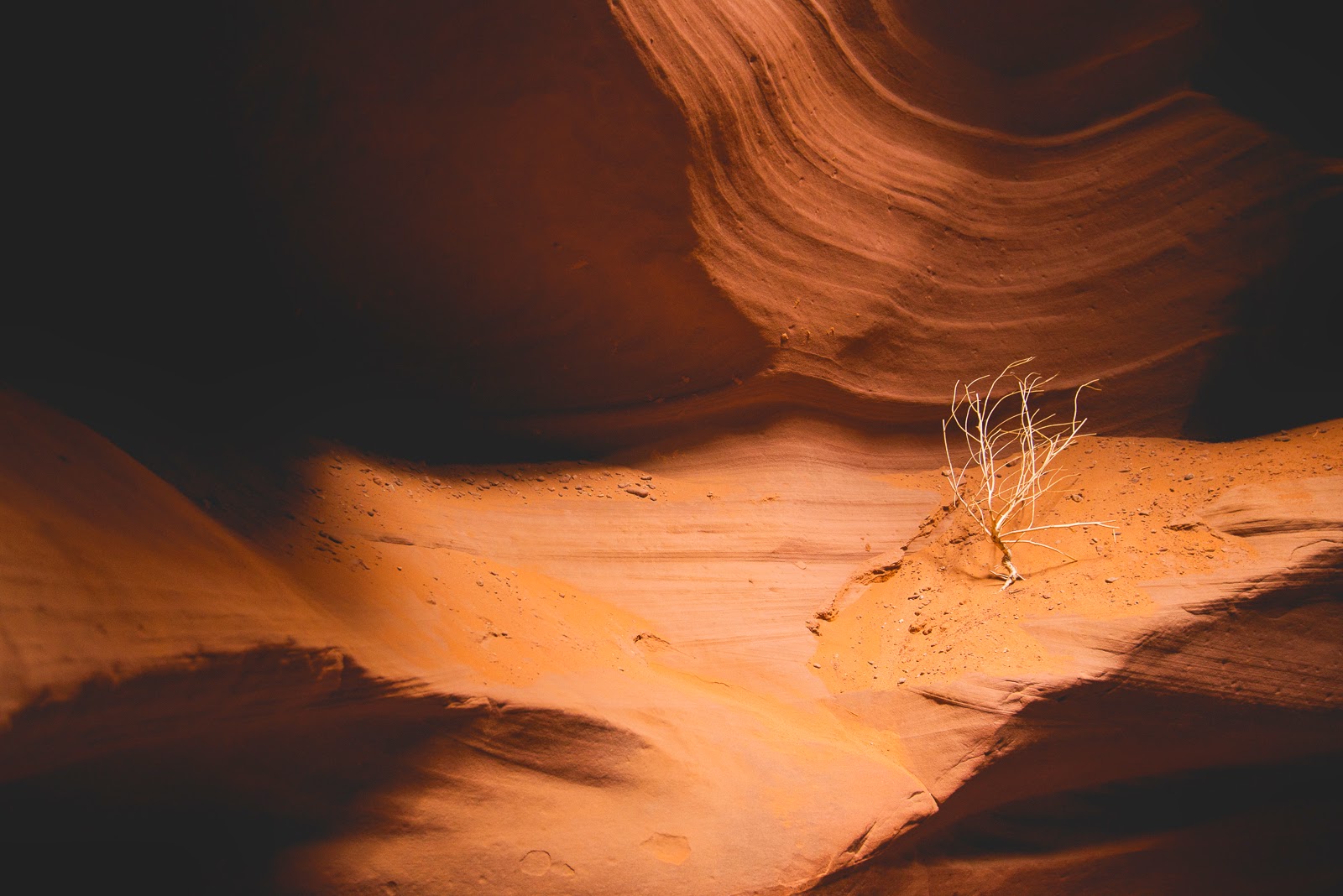 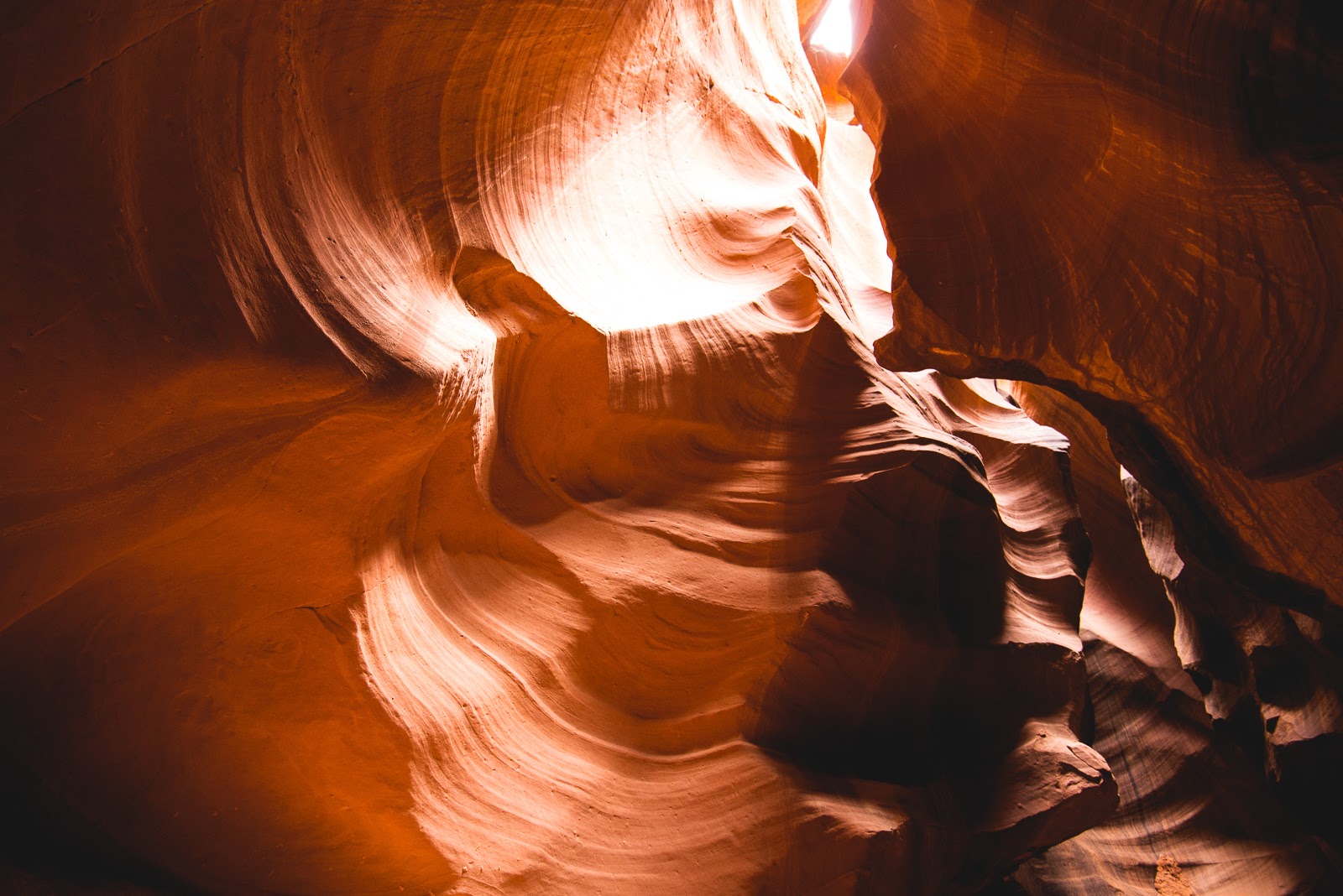 When you get to the most narrow part it suddenly opens up into a large clearing. 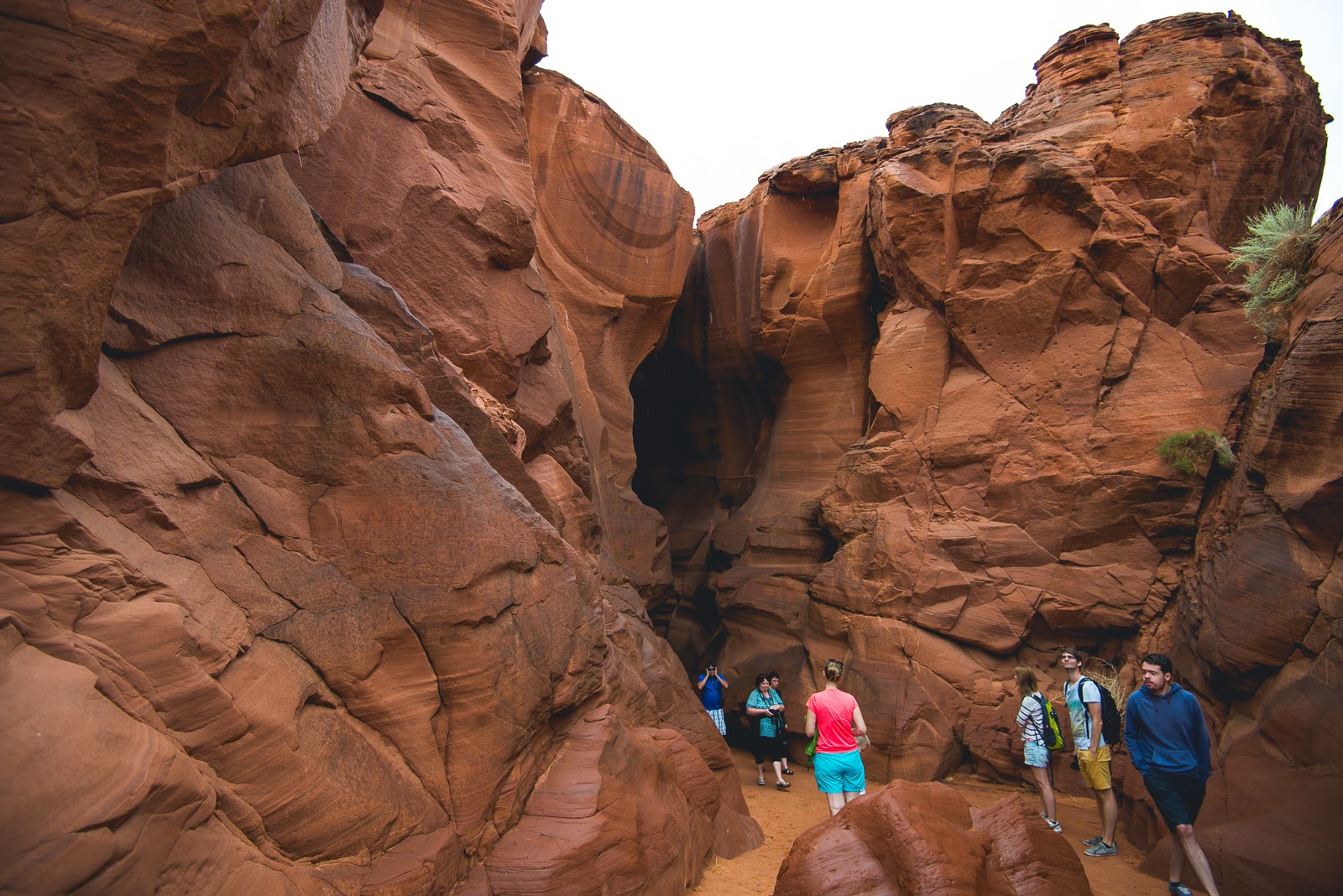 And then it's back inside the way you came to get back into the jeep, which, not surprisingly, was the three year old's favorite part.

Once we arrived back at our car, we headed to nearby Horseshoe Bend. By this time the weather was begining to turn rainy and the wind was really starting to pick up. Since the hike to Horseshoe was only a mile, we put on our coats, grabbed a few umbrellas and decided to go for it. The short hike through the desert is all downhill in the sand which is a little easier on the way going than it is coming back. 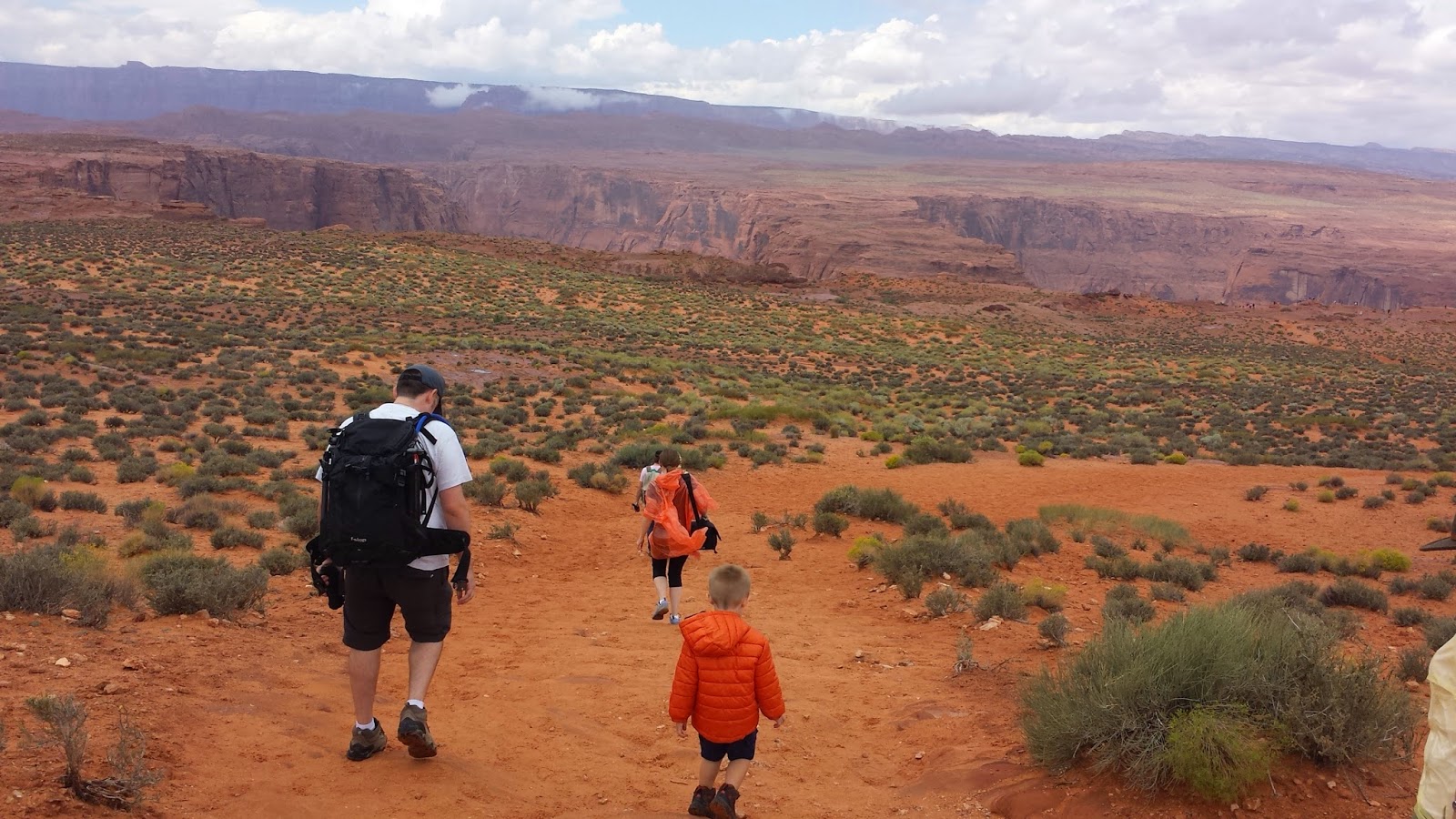 And even if you know it's coming, it's pretty crazy when all the sudden you reach the ledge and right smack in front of you is this... 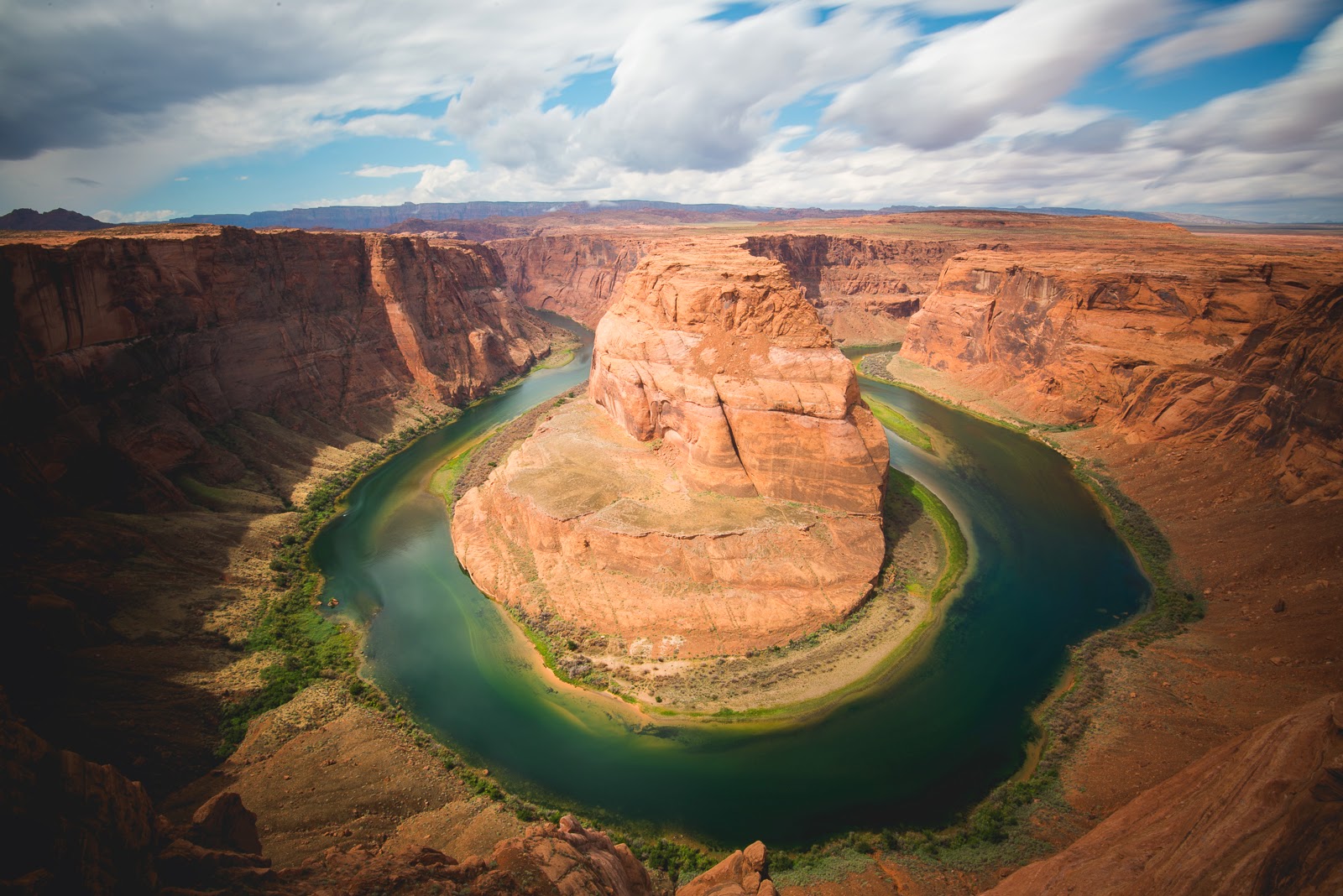 Aptly named, Horseshoe bend is a famously photographed area in which the Colorado River snakes around a monumental rock and creates the effect of a lucky horseshoe. What they don't tell you is how intimidating it can be to standing (LITERALLY) on the edge of the rocks looking straight ahead at this amazing sight and straight down into a 1,000 foot drop. Not only did I see multiple people scared to death to go near the edge, there is no fence or tiered drop off, but I was actually worried about the lack of fear in Landon and really nervous to be near the edge with him. When I asked him if he realized how dangerous the overlook was and he replied with a staunch NO! I realized it was time for us to back away.

So while Adam took a few pictures, Landon made "pancakes" with the sand a good 50 feet from sure death. 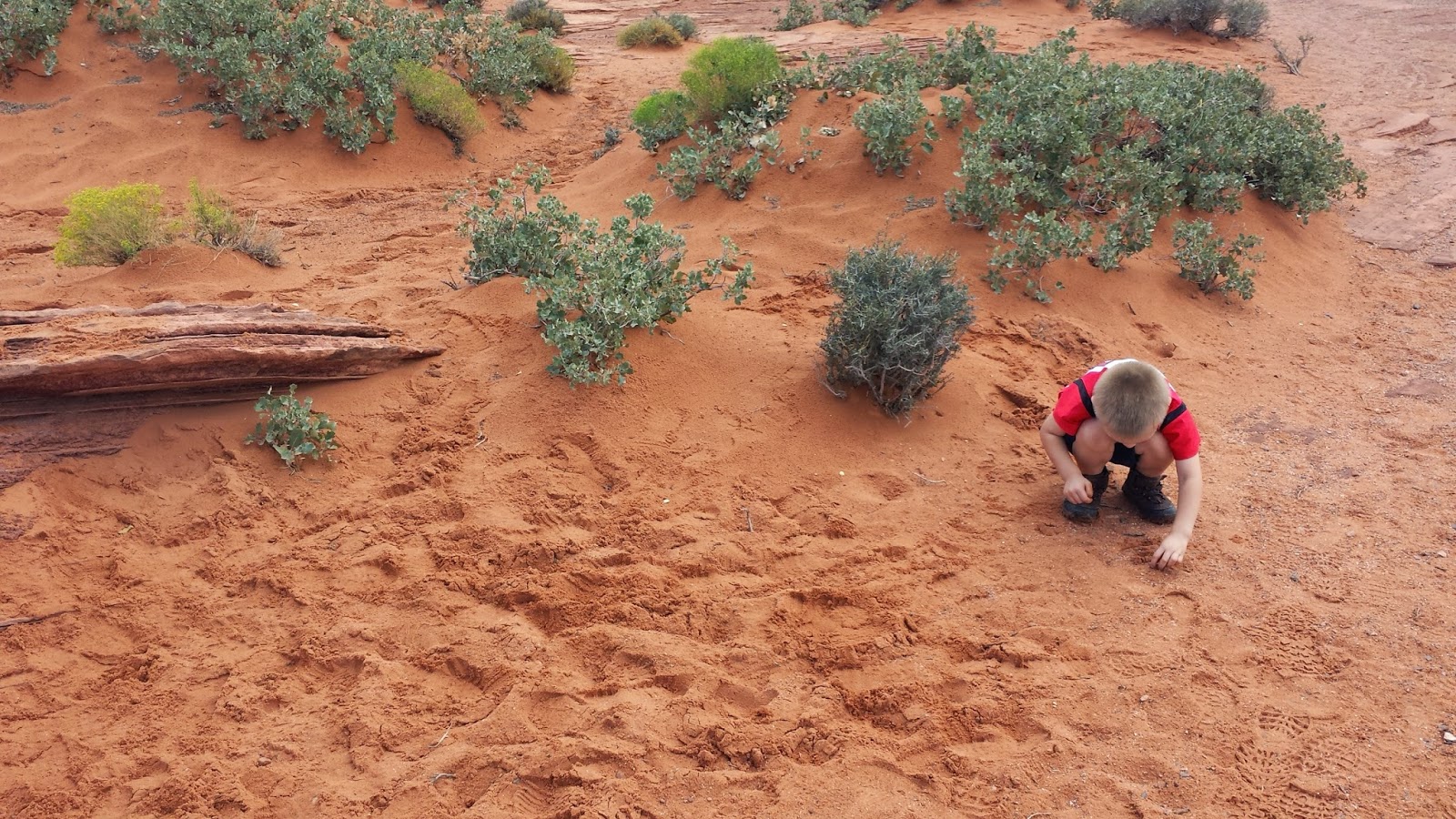 Of course he was happy and cared very little for the amazing site just a few feet away. Horseshoe bend really is an amazing site to see, but doesn't require a long stay. When Adam was finished, I went back over and snapped a panoramic with my phone just to try and get it all in.

The area in the front left is part of the ledge and on the front right you can see people out on another ledge. It's a shame that pictures can't adequately express how impressive it is. It's really one of those, see it to believe it type places. And just like the slot canyons, the rain held off, the sun came out and we were so happy we went for it.

Once back in the car, Landon settled in for a nap, while we drove a few hours to the last and biggest site of the day... 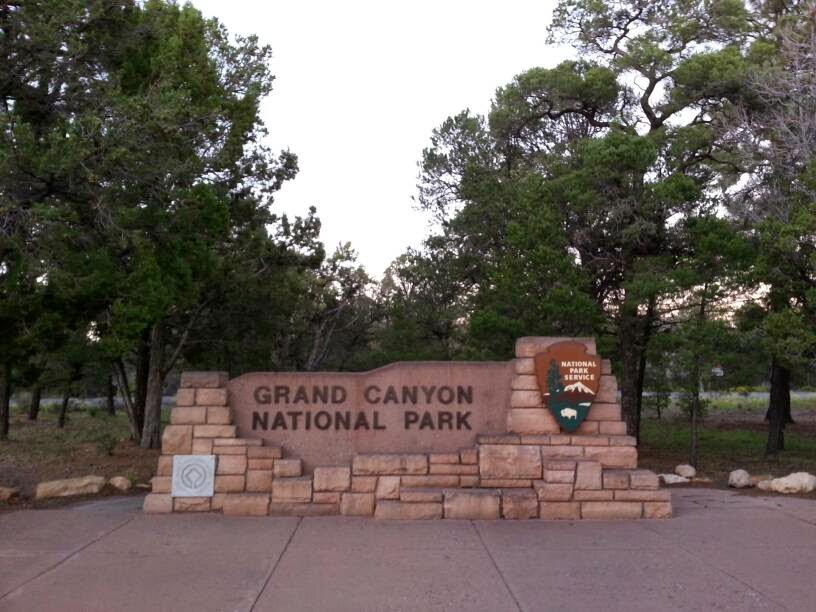 Knowing we still had to make it to CALIFORNIA, we didn't have nearly the amount of time we would have liked, but that is the story of this roadtrip. We drove up the South Rim and made our way along the pull outs. While we would have loved to do some hiking, like all the way down from the rim, we were content with the views we had before us. 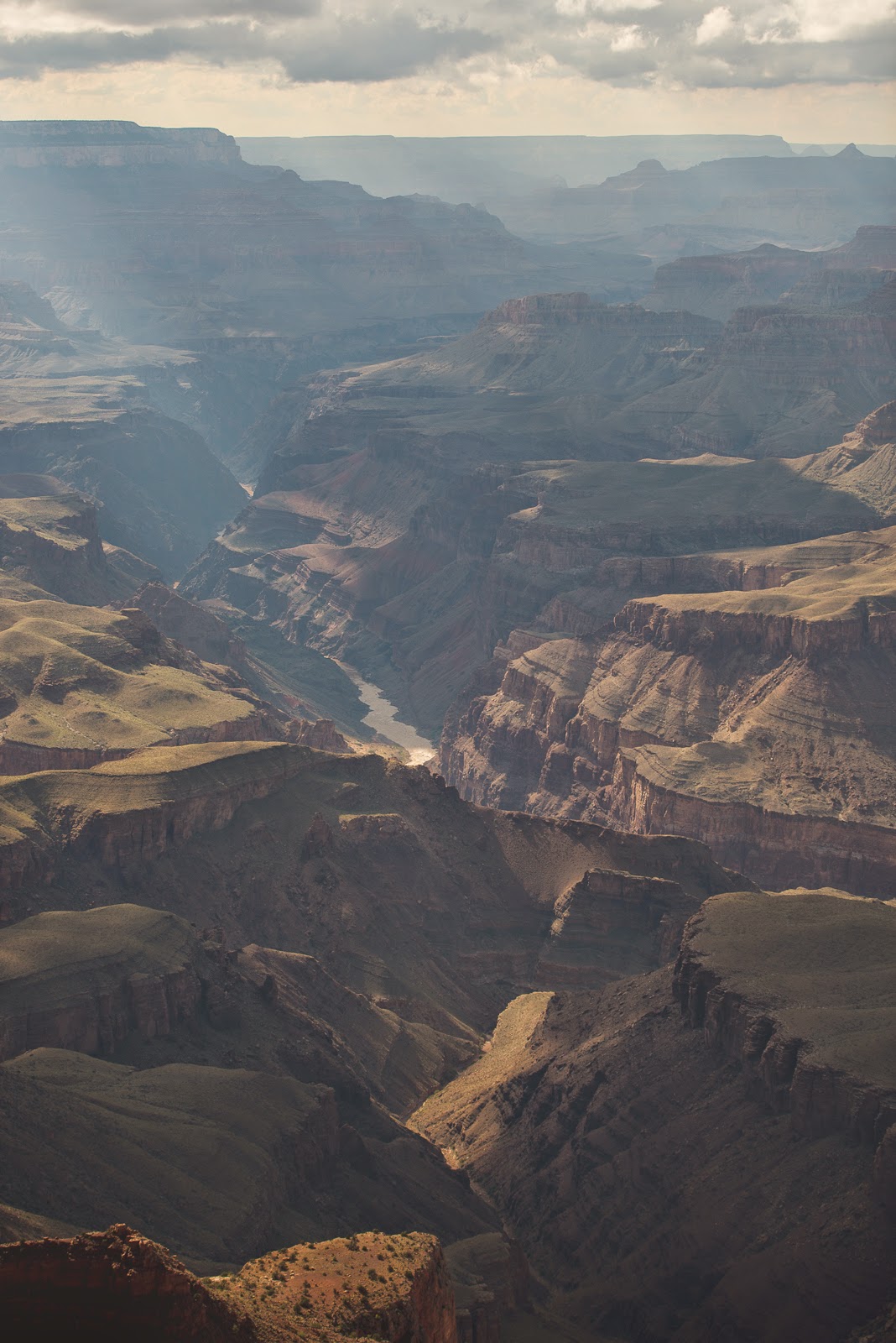 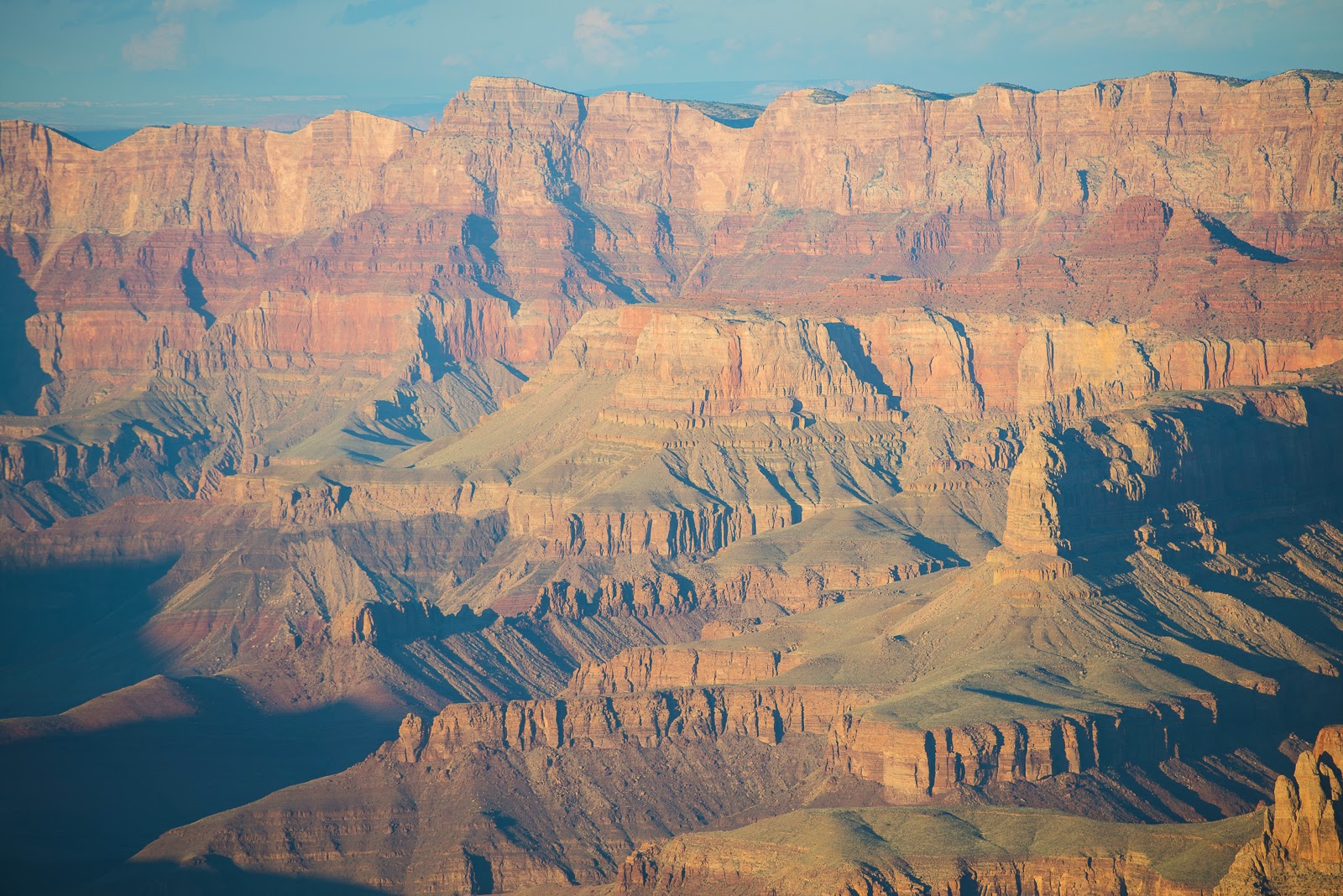 Grand doesn't even begin to describe it. Not only can the camera not even begin to adequately frame this beast, but even the human eye cannot possibly take it all in. We slowly made our way to visitor center to get Landon a National Parks Passport, something that Adam let slip past us at Arches, and as we came back out the sun was starting to set on parts of the canyon. 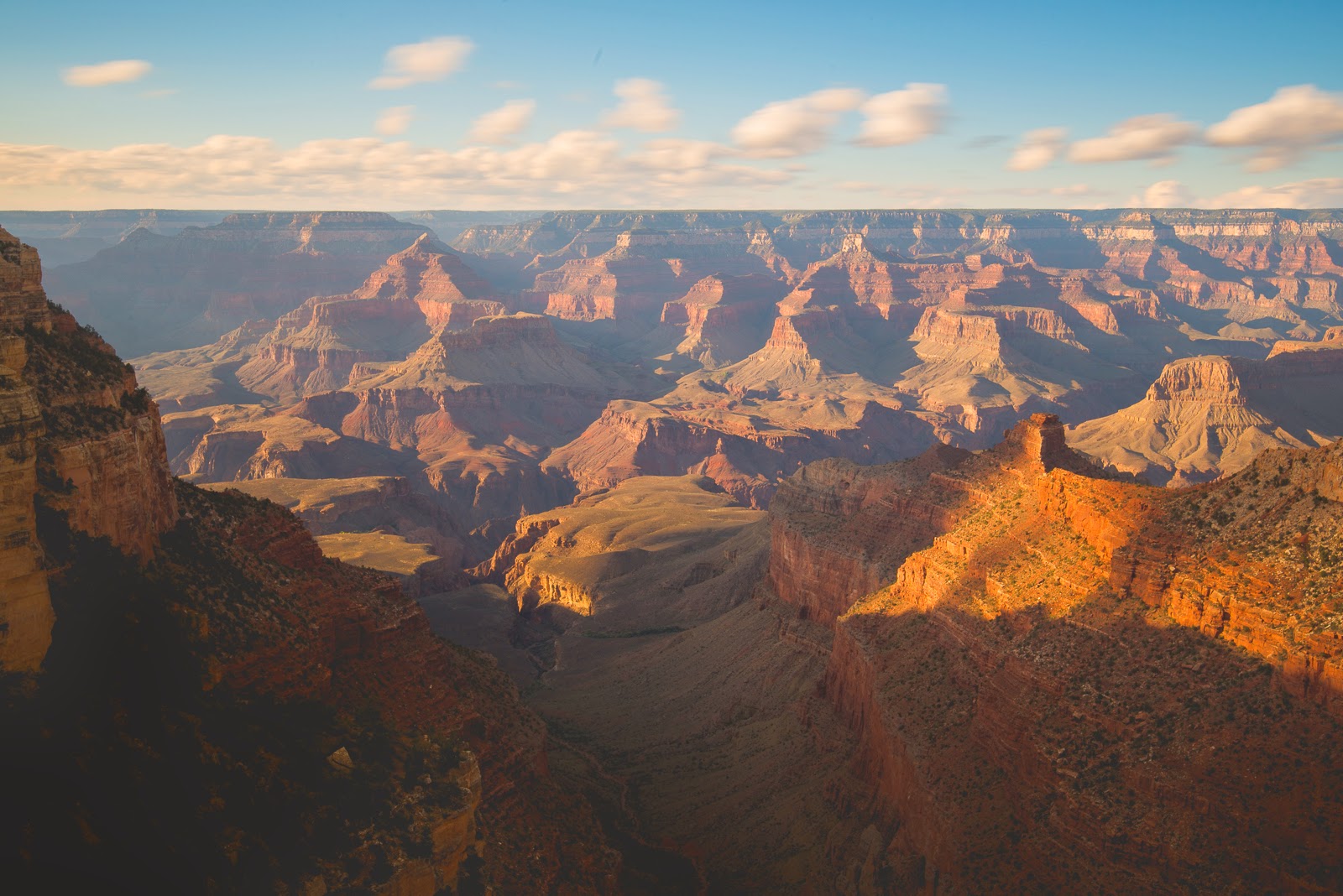 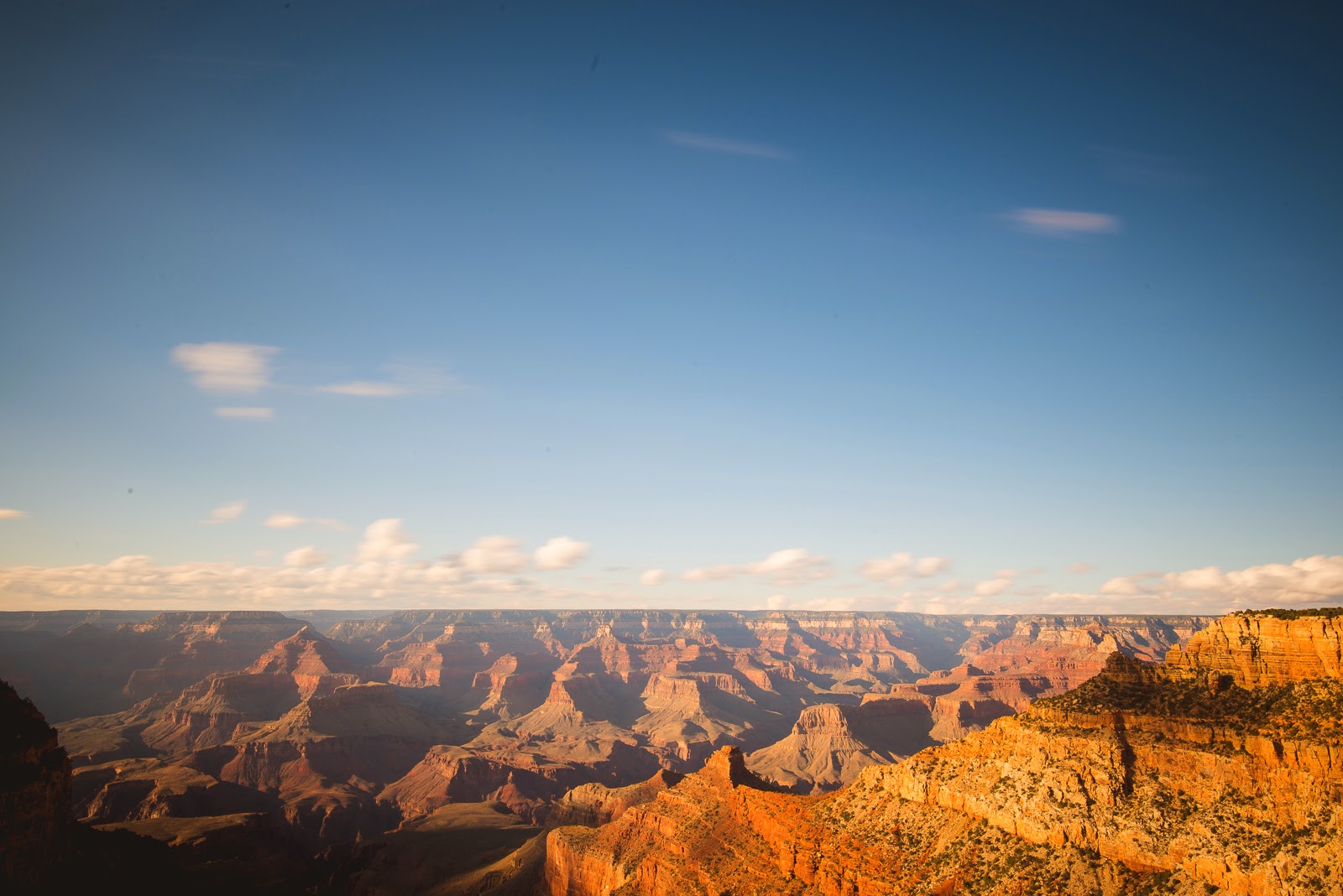 It was absolutely stunning!!!!! And I cannot wait to go back, spend more time exploring the rim, hiking the area, and rafting on the river below. I know it's a trip that Landon won't be ready to do for a number of years, but when he is, we will be sure it's a great one! This was no doubt my favorite part of the entire roadtrip and I can't wait to make more memories here. 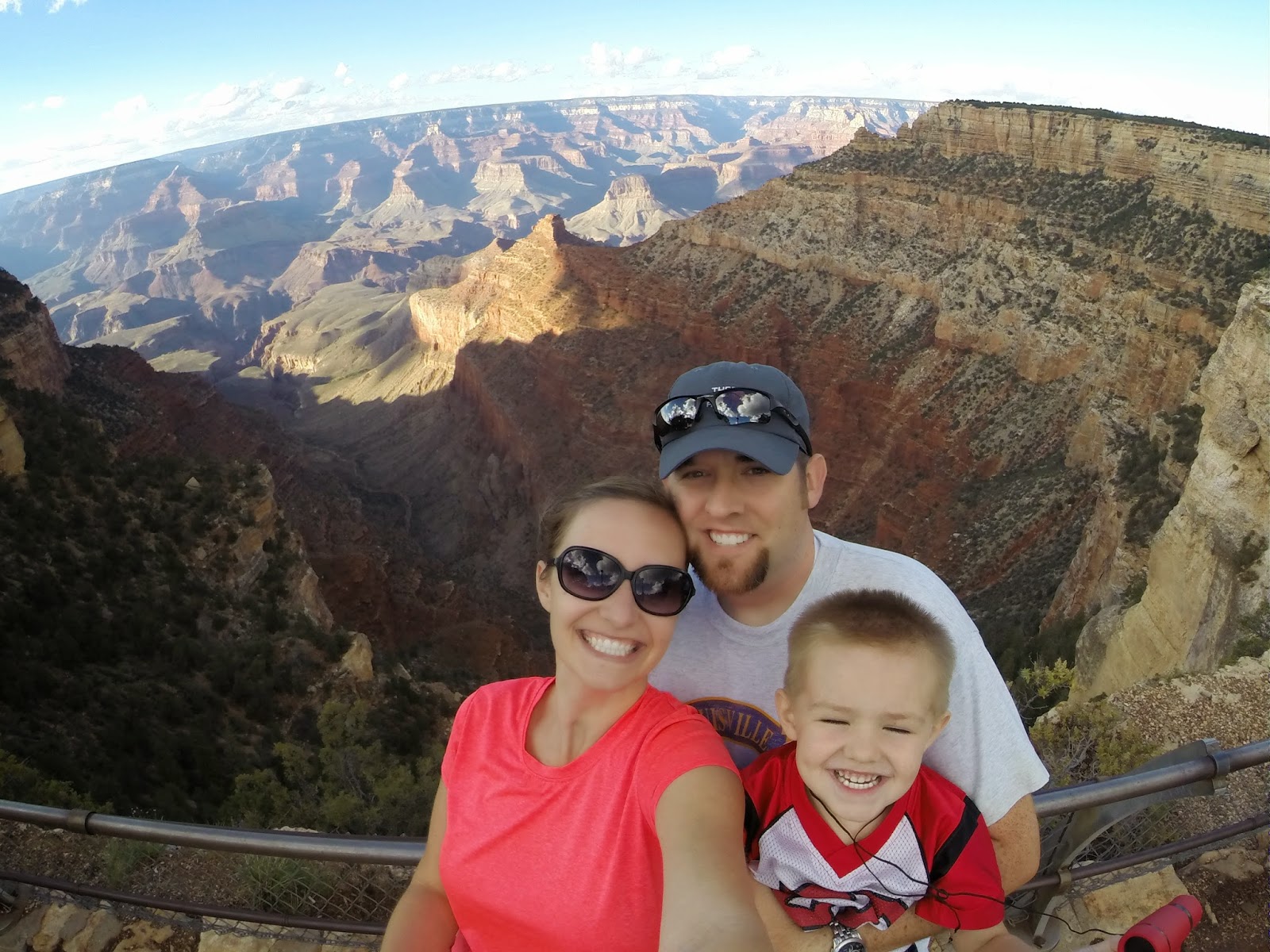 So as the sun set, we said our goodbyes (for now) and started a 6 hour drive to CALIFORNIA!!! We knew we wouldn't be arriving to our hotel until after 2am, but getting to do and see what we did during the day made the long drive at night totally worth it. On top of that, as the night grew darker and the miles kept adding up, the saddness of saying goodbye to the Grand Canyon and Arizona faded and our excitement to arrive in California began to grow.
Posted by Unknown at 10:11 PM