I got so caught up sharing our whirlwind day in Arizona in Part 3 that I completely forgot to include my favorite picture of the day... 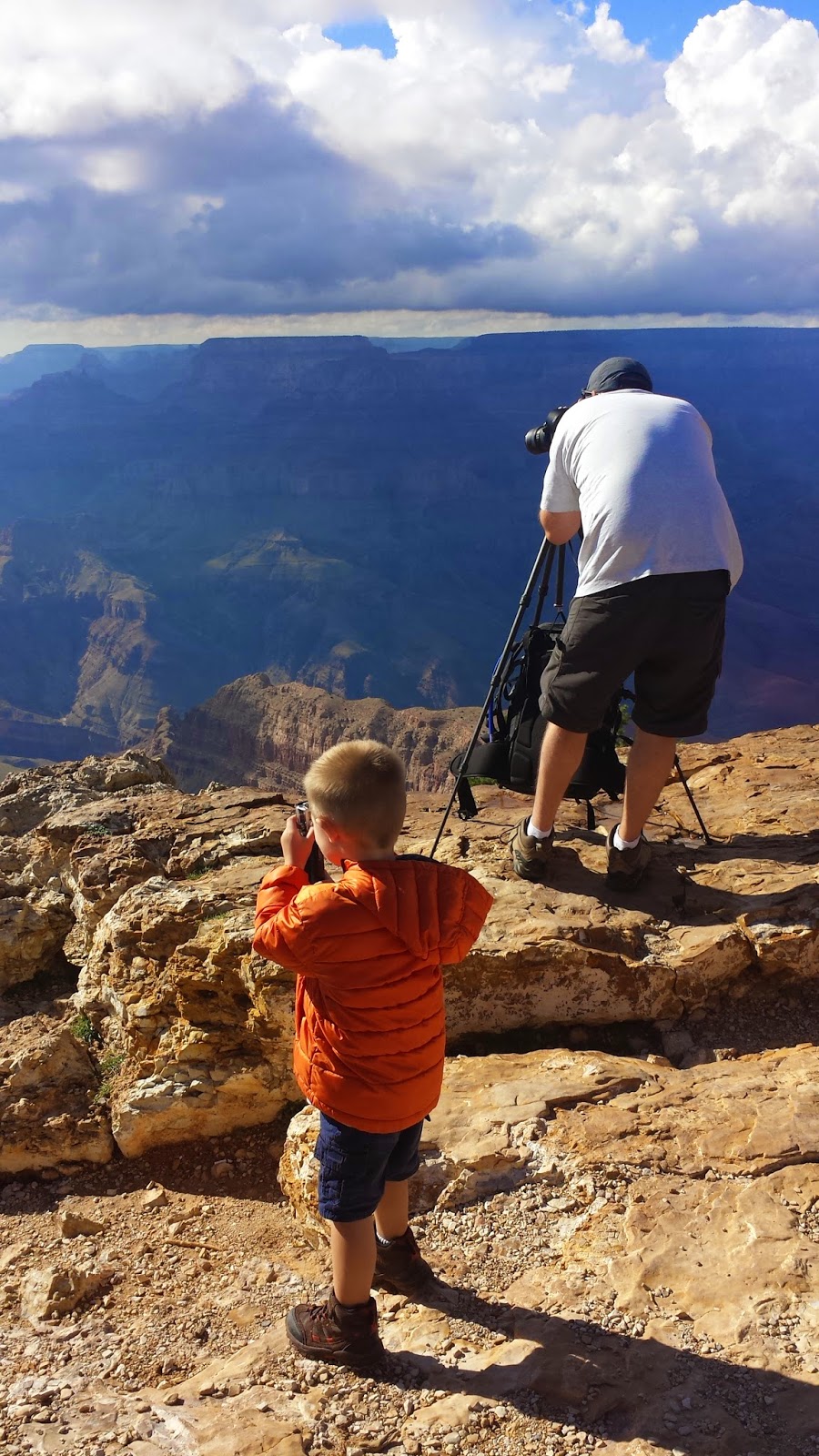 While Adam took pictures over the Grand Canyon, Landon asked to see the GoPro, went to try to stand like his Dad, and started "snapping away". Technically, the GoPro was off and the camera was pointed toward him and not away, but he was so excited to share that he took pictures too that it melted my heart.

But despite his cuteness, Landon was really growing tired of road tripping and being crammed in a car together for 5 days was starting to wear on us all. It was time we stopped lollygagging and got to San Francisco. As we drove late into the night with Landon sound asleep in the backseat, the excitement of actually entering into California kept this co-pilot awake for the entire drive (a first!).
As we entered into California, I really wanted to stop and take a photo at the sign, but it was located on a bridge with no place to turn off. Oh well, it was still awfully exciting!

As we continued on with our first few miles in our new home state we started to see signs saying "stop ahead, all cars must pull over, inspection ahead". Sure that it would not include him, Adam slowed as we came to a border crossing type inspection area. He rolled down the window as a woman approached and she told him this was part of the California Agricultural Department and she had to inspect his trailer. Not sure what to expect, Adam got out and unlocked the trailer for her. She proceeded to tell him that she needed to check for ants while he tried to explain that the trailer was jammed packed to the brim. She took her flashlight and examined the corners of the the inside of the trailer, asked if we had any plants or produce, gave us this awesome little certificate and sent us on our way.

We had a nice laugh about it once we were back on the road. We decided we could start making a list of reasons why California is bankrupt and that can be the first on our list. We also decided when we drive the Jetta into San Francisco we should have an ant farm in the passenger seat just to see what happens.

Like we predicted, it was a little after 2am when we finally reached our hotel in Hisperia just outside of Barstow. The next morning, we got up and headed out right away. And this was our first real glimpse of California. The most desert looking place we had been thus far... 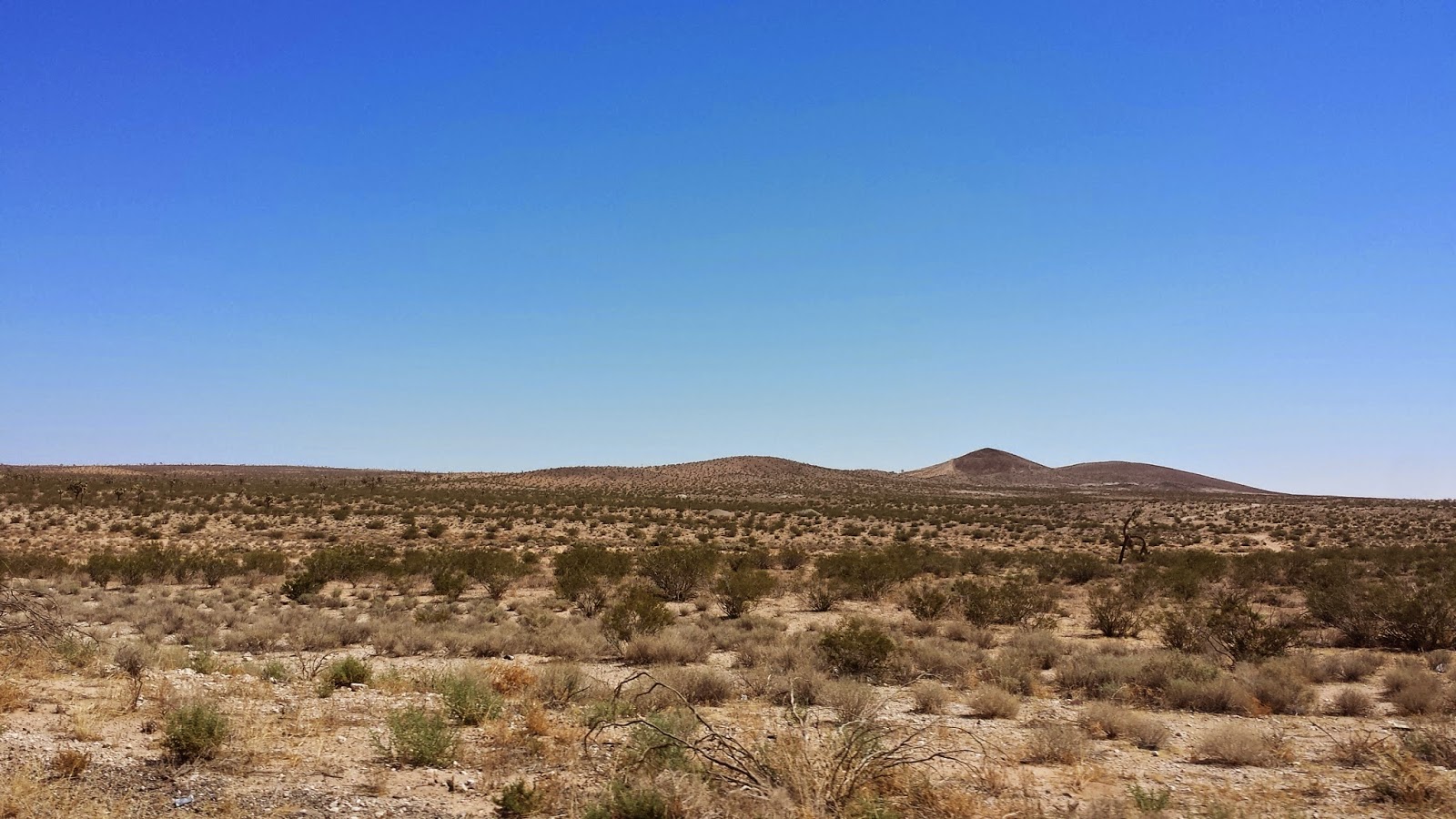 Not far outside of Bakersfield, the area became very pretty as it became less flat and more hilly. We discovered on this trip that all landscapes carry beauty just in very different ways. 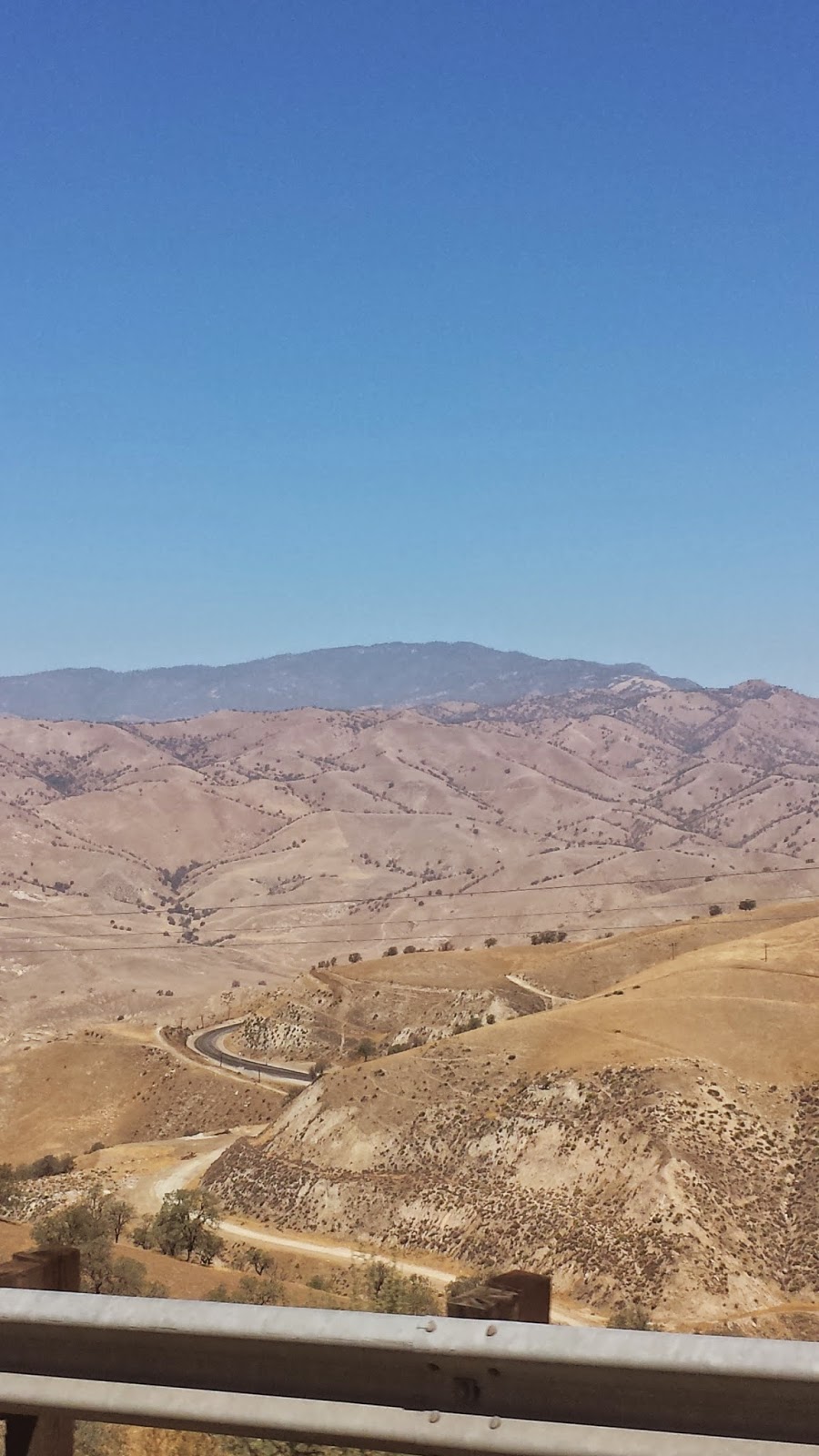 In the same area, we added our number 2 reason for California's money crisis... 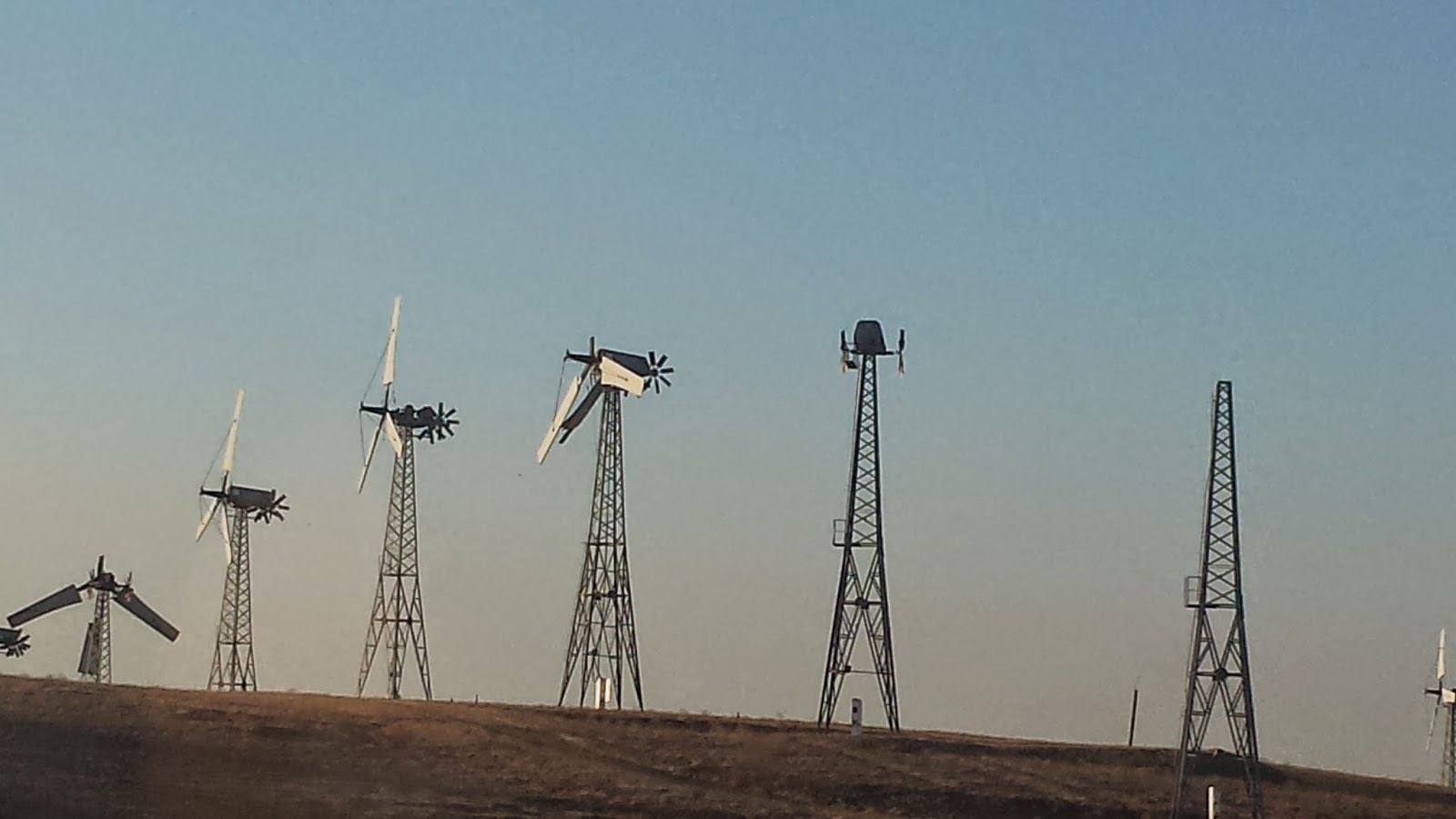 Kansas showed us some spectacular windmill farms, but California is home to the broken, poorly maintained farms. And although these windmills are much smaller, even the newer large windmills we passed were obviously not maintained and, at best, had stopped turning. It was pretty sad.

Not far after the hills and broken windmill farms, the area flattened out and for the next few hours we passed hundreds of miles of groves. We were obviously in the heartland of California's crops and it was stunning how big these groves were. Millions of acres no doubt and they seemed to mostly be lemons and walnut trees along our route. 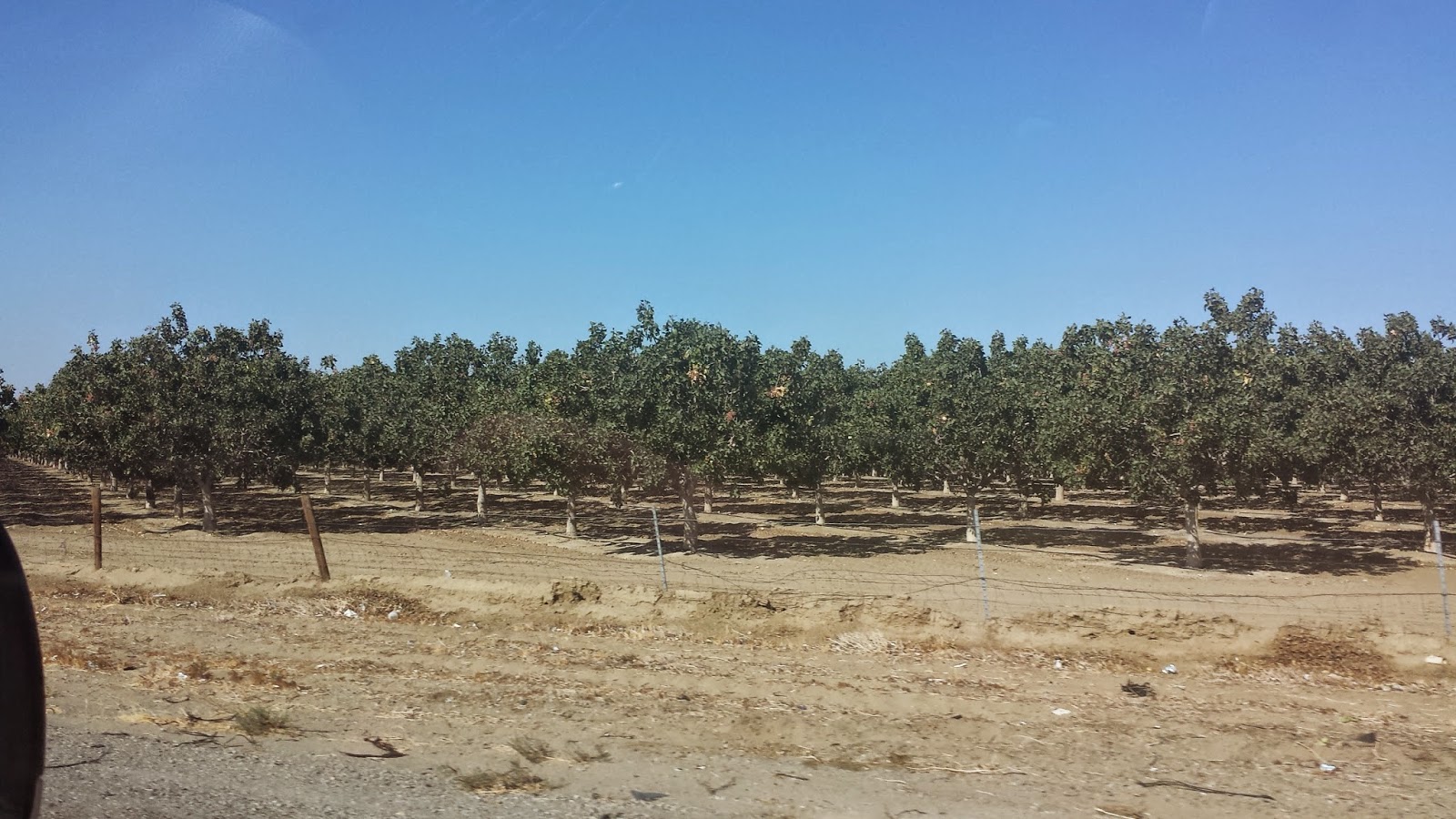 Sometimes, we would breach the top of a small hill and these groves would extend as far as the eye could see, in all directions. Mind you, that is pretty far in this environment. 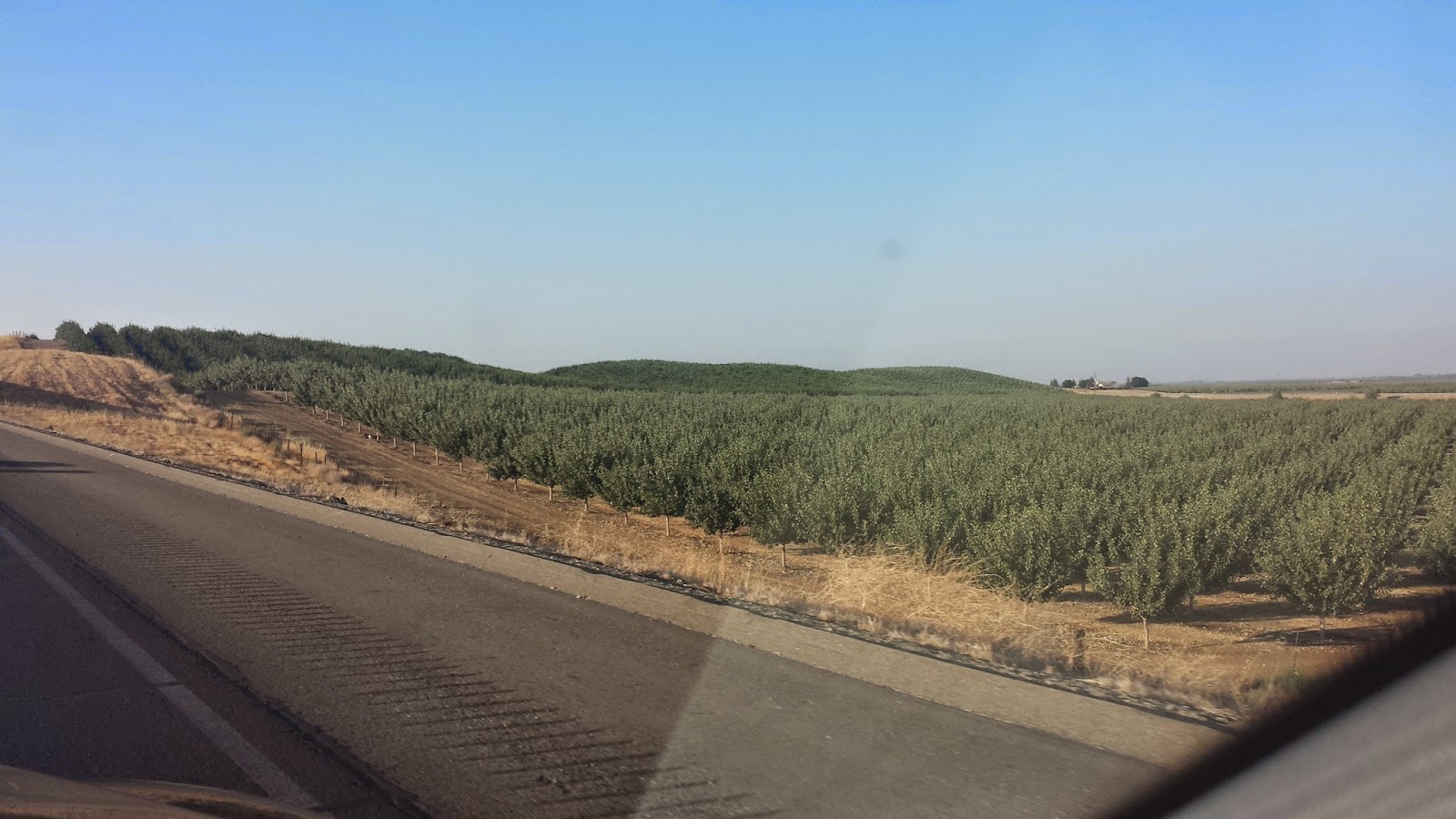 Along this route we also came across hundreds of signs about the 'government produced drought'. Almost as sad as that, was the feeding farm we parked next to when we pulled off to switch drivers. Not realizing what it was at first, we quickly smelled the tens of thousands of cows next to us with not much room to move, but plenty of food to eat. At first it was just the smell that disgusted us, but as we drove away and saw that this farm also extended for miles and as far as we could see, it was a pretty disgusting sight. I've always wondered where my Dad's cattle go when they sell at market, and while I know his are not moved across the country, it wasn't exactly pretty to see it in reality. That being said, it wasn't enough to keep us from trying the much anticipated, In and Out, for lunch. 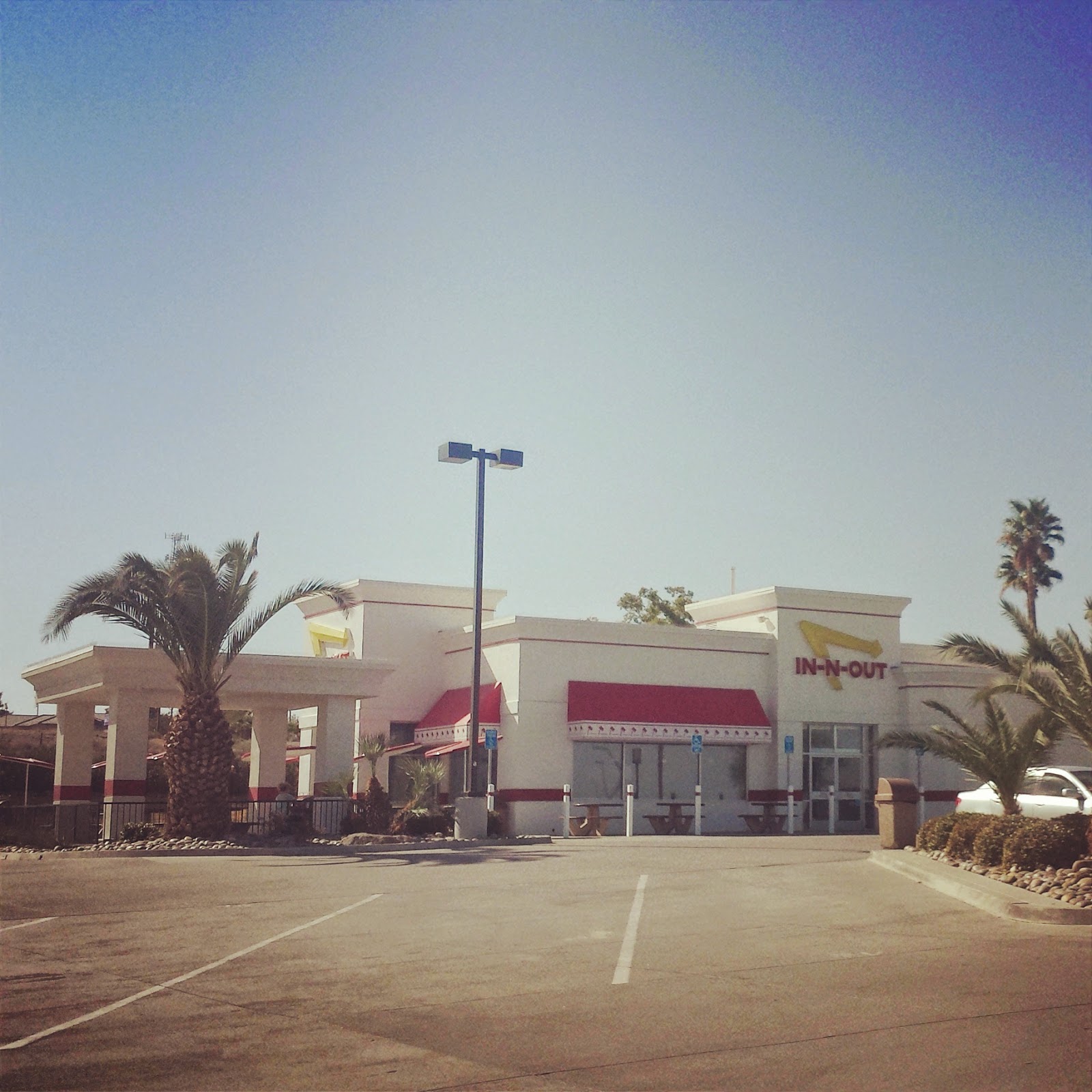 I have to admit, it was pretty good for burger and fries. By this point, we were more than ready to get to San Francisco, the day had been interesting to say the least. Landon even started keeping watch with his new binoculars he got at the grand canyon. Just as the sun was starting to set we came near the city of Livermore and the entire scenery changed. We went from a flat desert landscape to one that was very hilly and green. 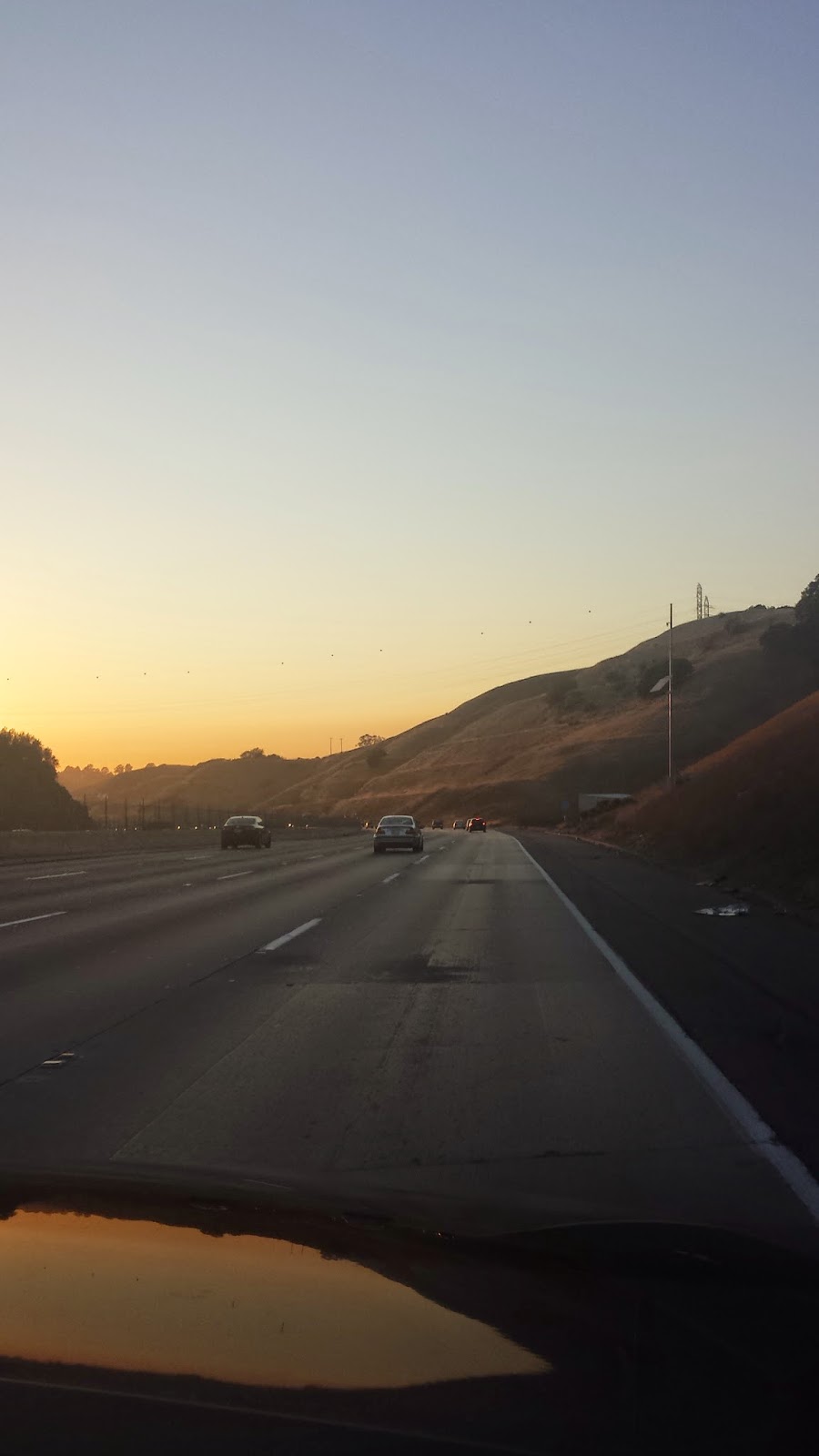 It was the perfect time of day, minus the sun almost directly in our eyes, to be welcomed to our new part of the world. We also got our first glimpse of the amount of traffic we would potentially face with 6 lane expressways on either side opening up. 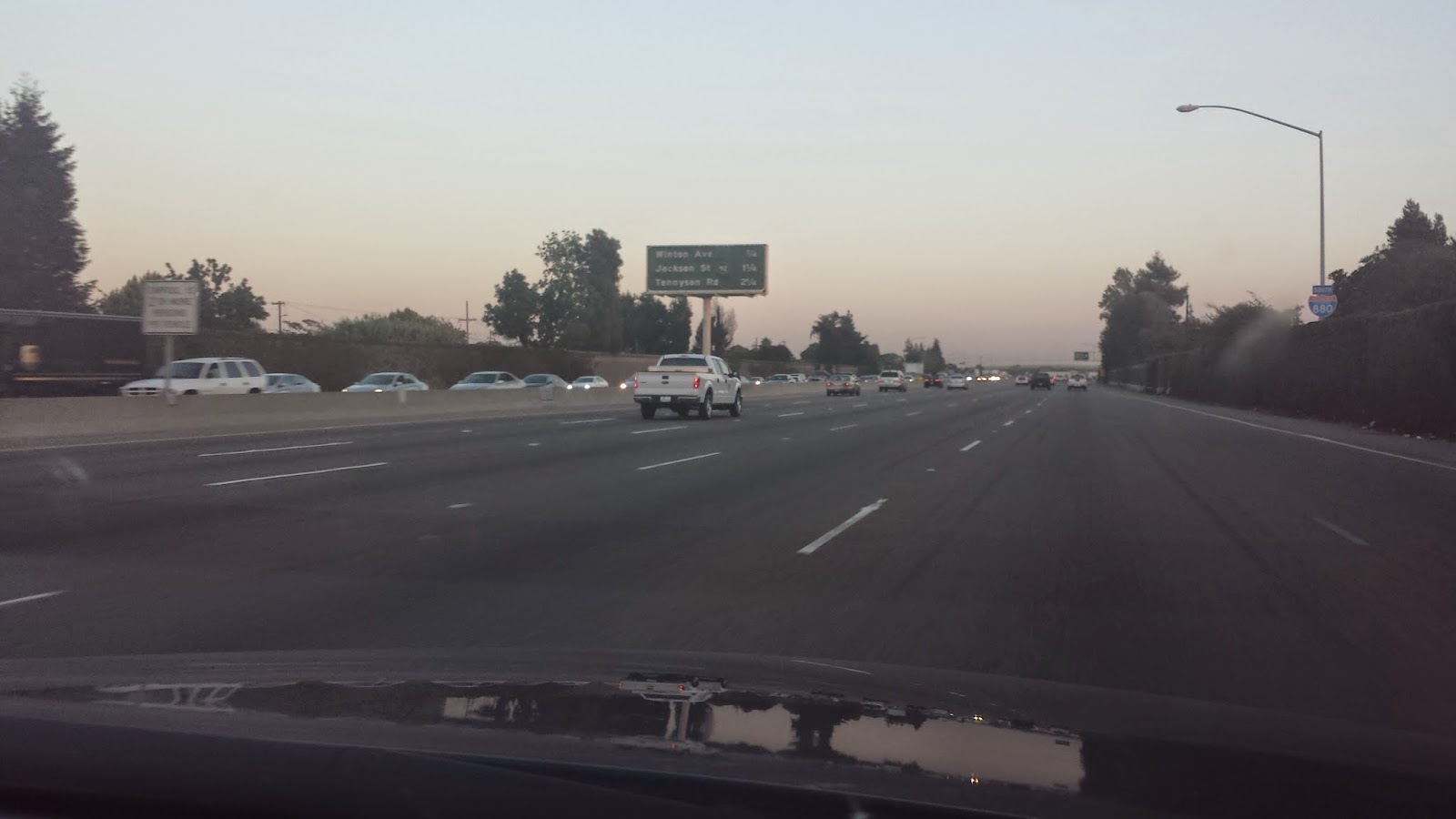 The timing was perfect, and we all got our first glimpse of the water just as the sun was setting. 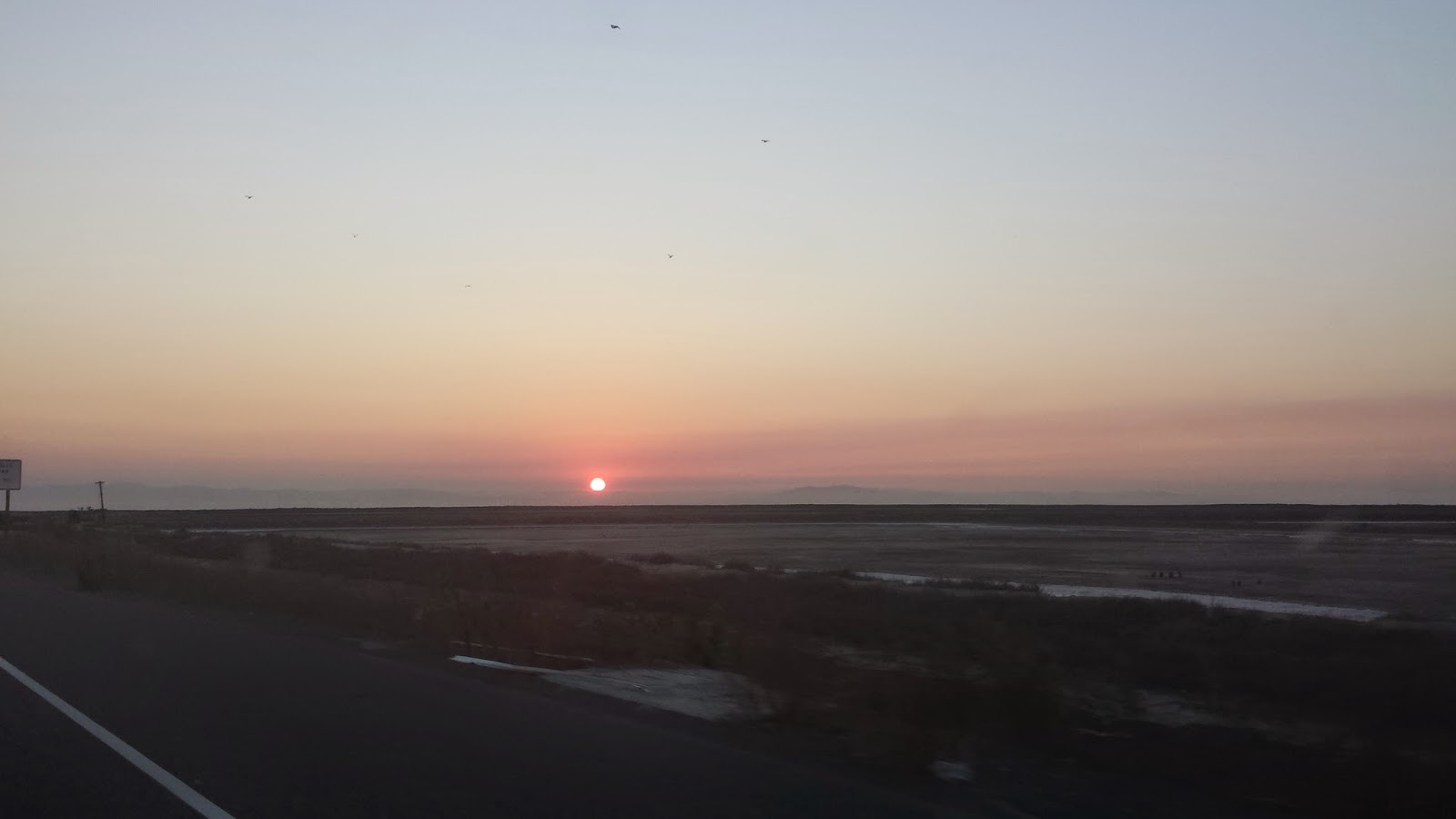 And I thought I would be able to capture that perfect minute just when the sun has gone at the horizon while we were crossing the San Mateo bridge onto the peninsula, but instead we spent about 5 minutes at the toll on the bridge counting our change to be able to pass. We had $14 cash on us and willingly went through the cash only lane at the tolls mistakenly thinking the toll would be $5. Little did we know, the toll is $5 per axles which with our trailer was a total of 4 axles of $20. So with only $14 it was a harrowing experience to count our change and come up with the remaining $6. Just as the cars were really starting to honk at us, we scraped together the last dollar, apologized profusely, and headed across the bridge. 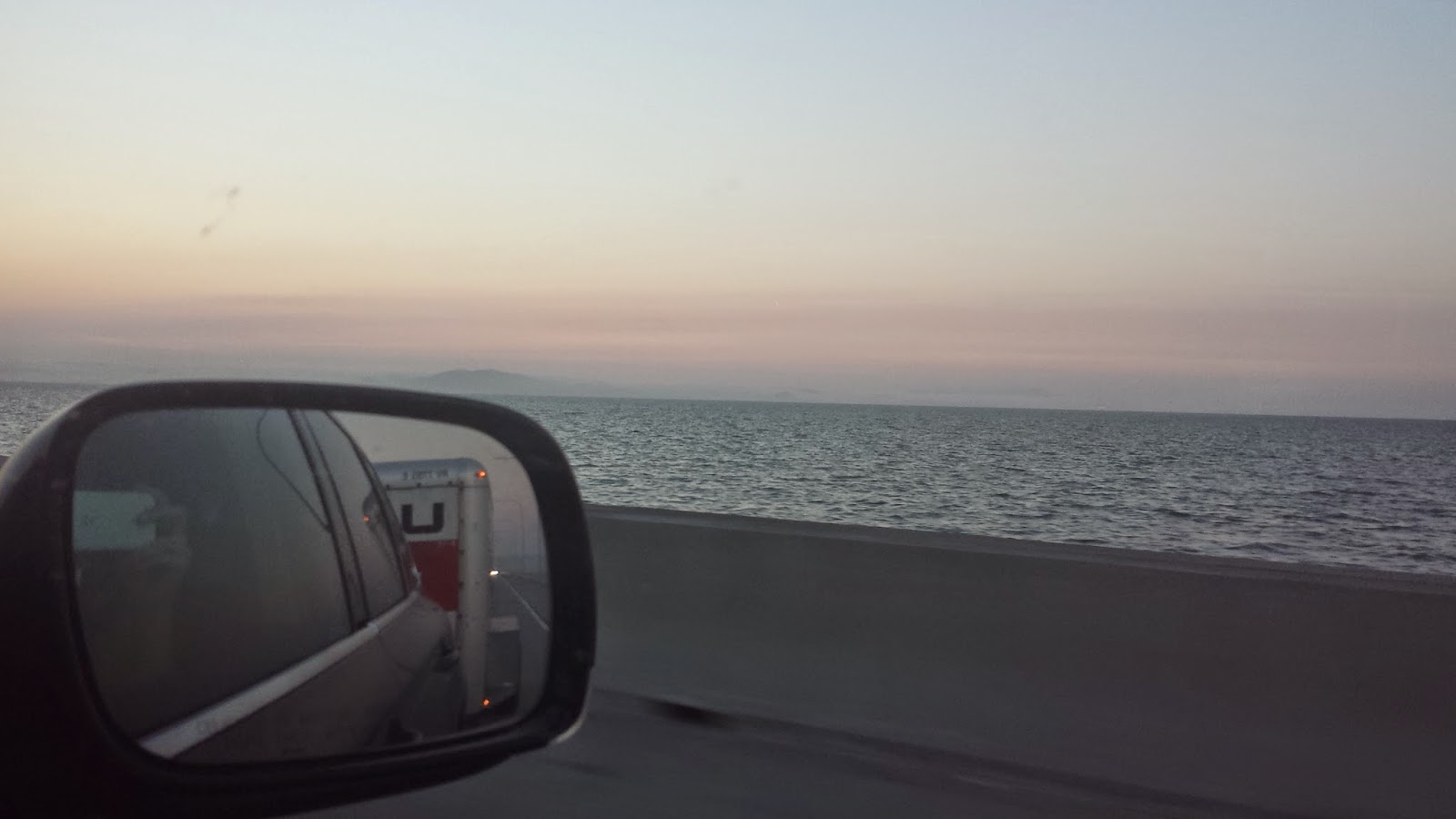 Just above the rear view mirror you can see the outline of a big hill. If you follow that over to the right, just past the center of the picture you can see another dark area, that is the city. It was just barely visible to us as we crossed although it doesn't show up in the picture very well. Despite our embarrassing moment, it really felt like we were being welcomed home by the sky and sea and we knew that the journey was over (and just beginning) and no matter what, we had made the right decision.