We've been in the area for one week now and what a busy week it has been. Things have been moving quickly for us and we've been going, going, going.

Adam started his job Monday and being the first week it's been a little light. He had a half day on Monday, orientation Tuesday and Wednesday, and the office was closed Friday for a nationwide outreach day. The good news about that is that we've been able to do a lot more than we normally could during the work week. The bad news is that he still hasn't gotten a real feel for the office here yet. I'm sure he will love it, but next week they are sending him to Dallas for more training which means it won't be until the following week that he will really start getting his hands dirty (figuratively of course).

His first full week at the office, will also be my first week of working. I must be meant for long distance, because my all day interview went well and they've offered me a position. I feel so fortunate to have found a job so quickly. And once I had an offer in hand, the apartment looking became serious as did the search for a pre-school for Landon.

Thursday night we checked out a place that we really liked, put in an application and were approved! It's a nice, newer apartment in South San Francisco and we will have a whopping 1,134 sq ft!!!! For everyone on the east coast that is nothing, for California it's a big number. The biggest issue we've met and now overcome is that they allow our furry son too. I never thought I would be an apartment dweller, but it's just as exciting as when we purchased our house way back in 2008. The flexibility that we've had since selling our home to just pick up and move when opportunity strikes has been worth the price. And speaking of price, California gets you good in the wallet. For what we will be paying in rent, we could have purchased a $600k house! OUCH! But honestly, we are at a stage where owning just isn't for us, the freedom of moving to Europe in a few years will make that monthly payment manageable. And the way we see it, if we ever move ANYWHERE else in the country, everything will seem dirt cheap!

On top of the cost increase, there are a few other things that are VERY different to us. For example, paying for bags at the store. I paid 10 cents for a bag at Walgreens today and most grocery stores require you to have your own bags or charge. Recycling, they take it to a whole new level here. Our apartment complex has about 10 different trash cans so you can sort your trash. Sorting, is not something that I am use to at all and I struggle with it. The SF health tax at restaurants. It's only 2%, but the first time we ate out we noticed it. Turns out it is to pay for health care for the poor. Of which there are a lot. Homeless people are everywhere in the downtown area. The roads is another one and in many different ways. I think people drive here better than they do in Nashville, but Adam disagrees. We are living downtown so maybe it is worse here, but people have no problem cutting you off.  Some of the on ramps have traffic lights that tell you when to proceed. There are a ton of different highways and so the splits and merges are crazy and confusing. Also, you have to be hands free with the cell phones or they will ticket you, but the worst for me is the motorcyclists who lane split. Which means on the roads they will ride in between cars on the lane dividers. I swear one day I will hit one (inadvertently). 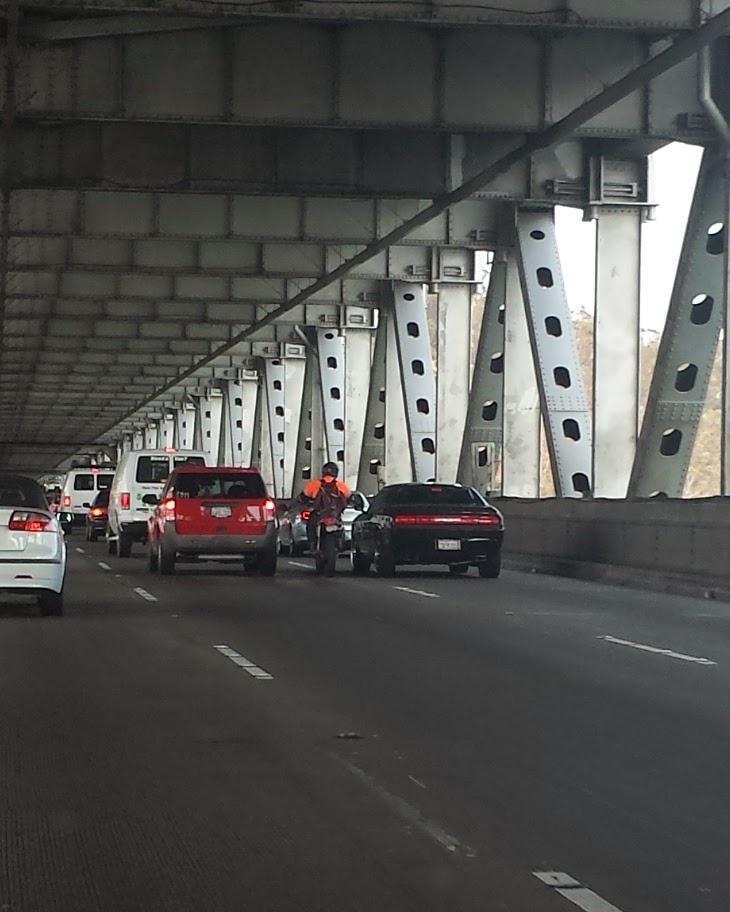 Lastly, the SF lifestyle is something that we are not use to. We visited a beach the other night, which happened to be clothing optional. There were a number of people taking the optional approach. Driving last weekend we saw our first publicly nude person on the street as some sort of parade or protest. Nudity is very common place here and this weekend might be the biggest nude fest of them all because it is the Folsom Street Fair. Unlike the name implies, this event is not for children. It's actually a leather and BDSM event. Needless to say, while we are finding that there over a million things to do here, there are also a lot of very non-kid friendly things and places.

Speaking of things to do, there really is a never ending amount of things to do. Think I am lying? I'm keeping track of things as I read/hear about them on my pinterest page and it's growing exponentially by the day. Check it out HERE. And it's not because we a new to the city, it is just so diverse. We could hike the trails for years here and still have thousands to explore. There are tons of museums, events, theaters. There are another million things to do/see/explore within a three/four hour drive and then there are the beaches. This family could spend hours and hours a day at a beach and never grow tired of it. Especially Landon. He's started wanting to wear his swim trunks 24/7 in hopes we will go to the beach soon. And we've only explored 2 so far. 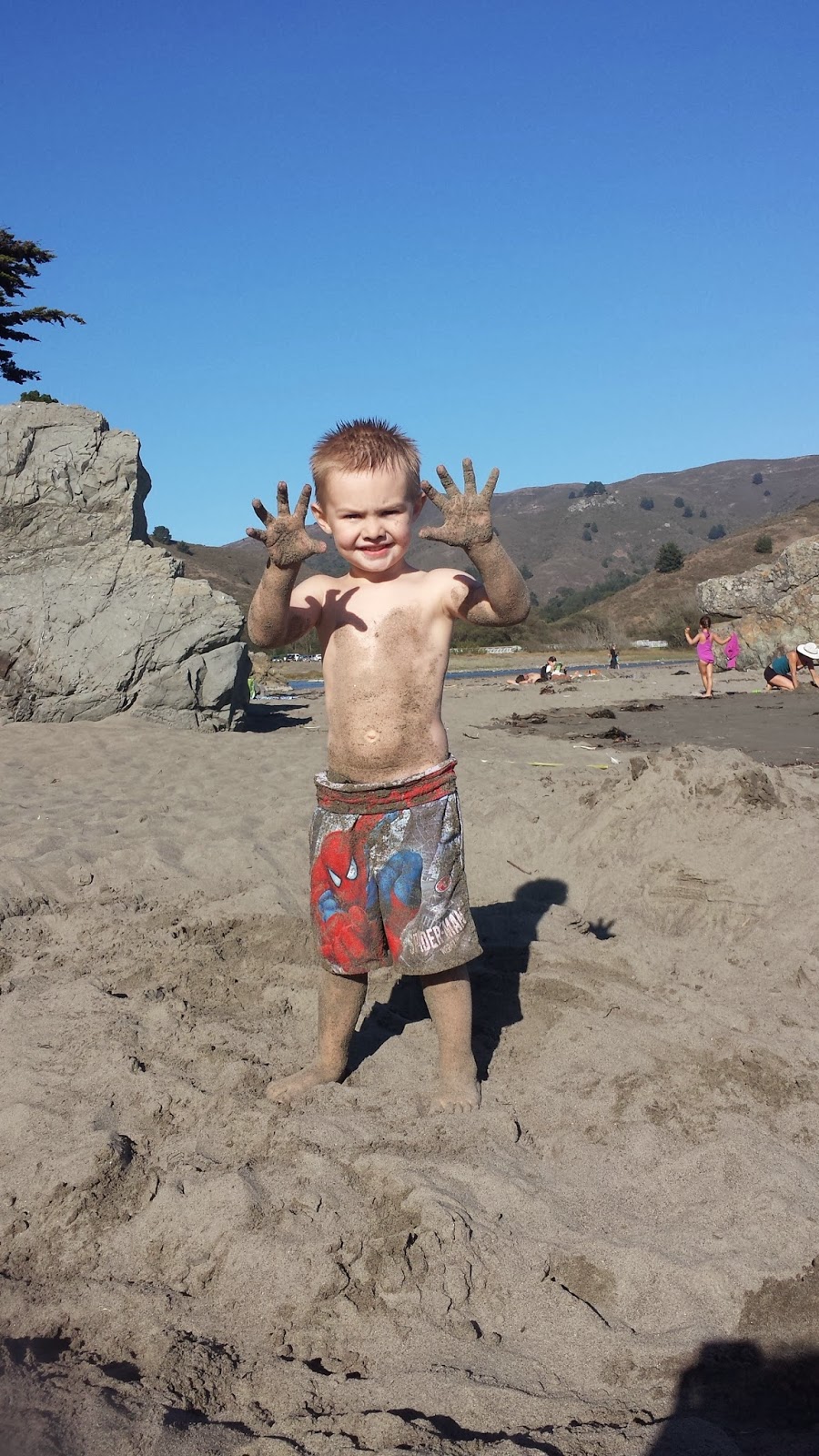 The water is pretty chilly and so he likes to play at the water line, get a little wet and then roll around and play in the sand. Even just walking down the beach with us makes him happy as a lark. I think he will grow up having a love of the water like I do. 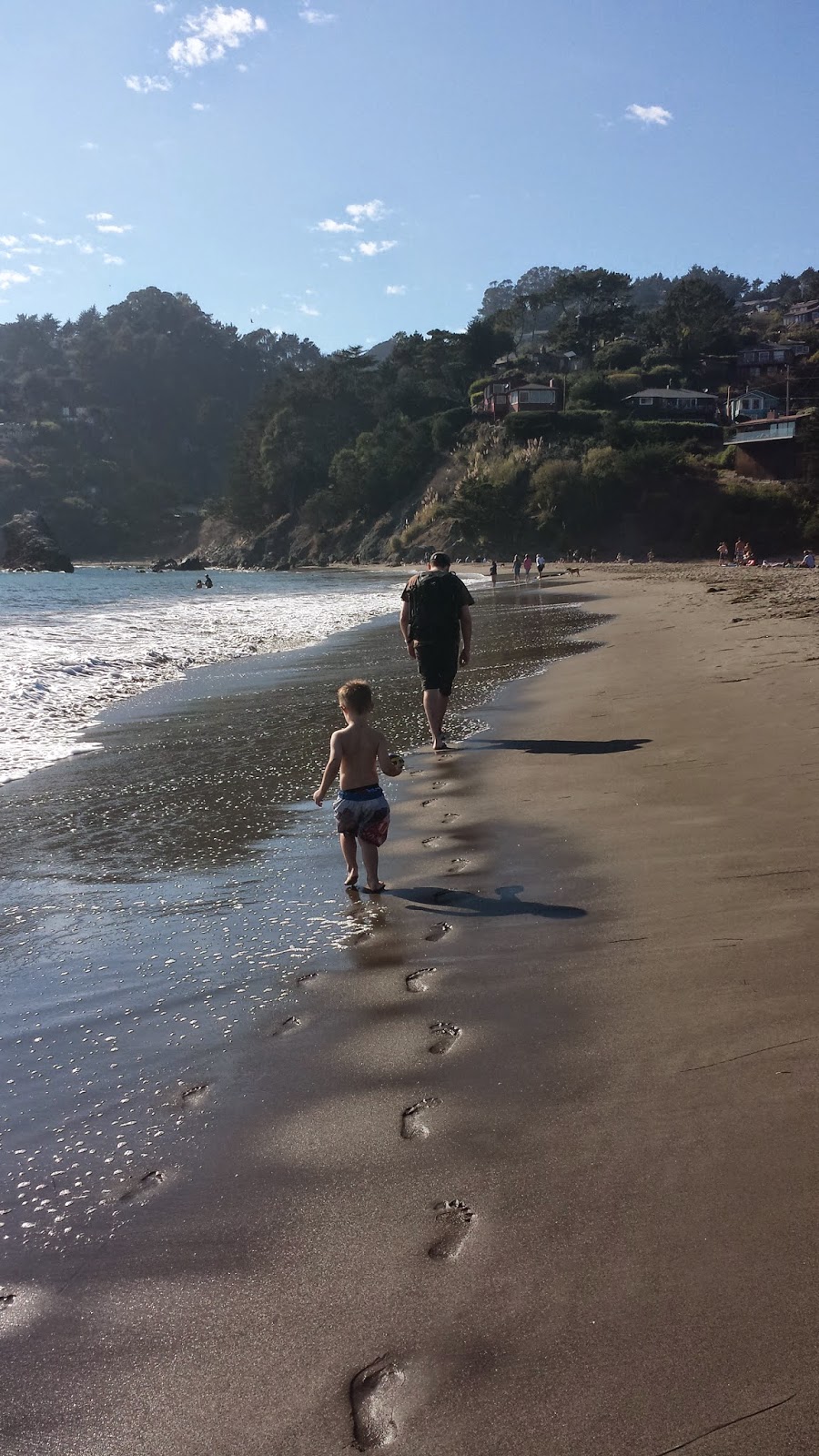 Landon loves the beach, the water, the sand, all of it, but he also loves our apartment. Adam's work put us up in corporate housing for a month so Saturday we moved into this place. 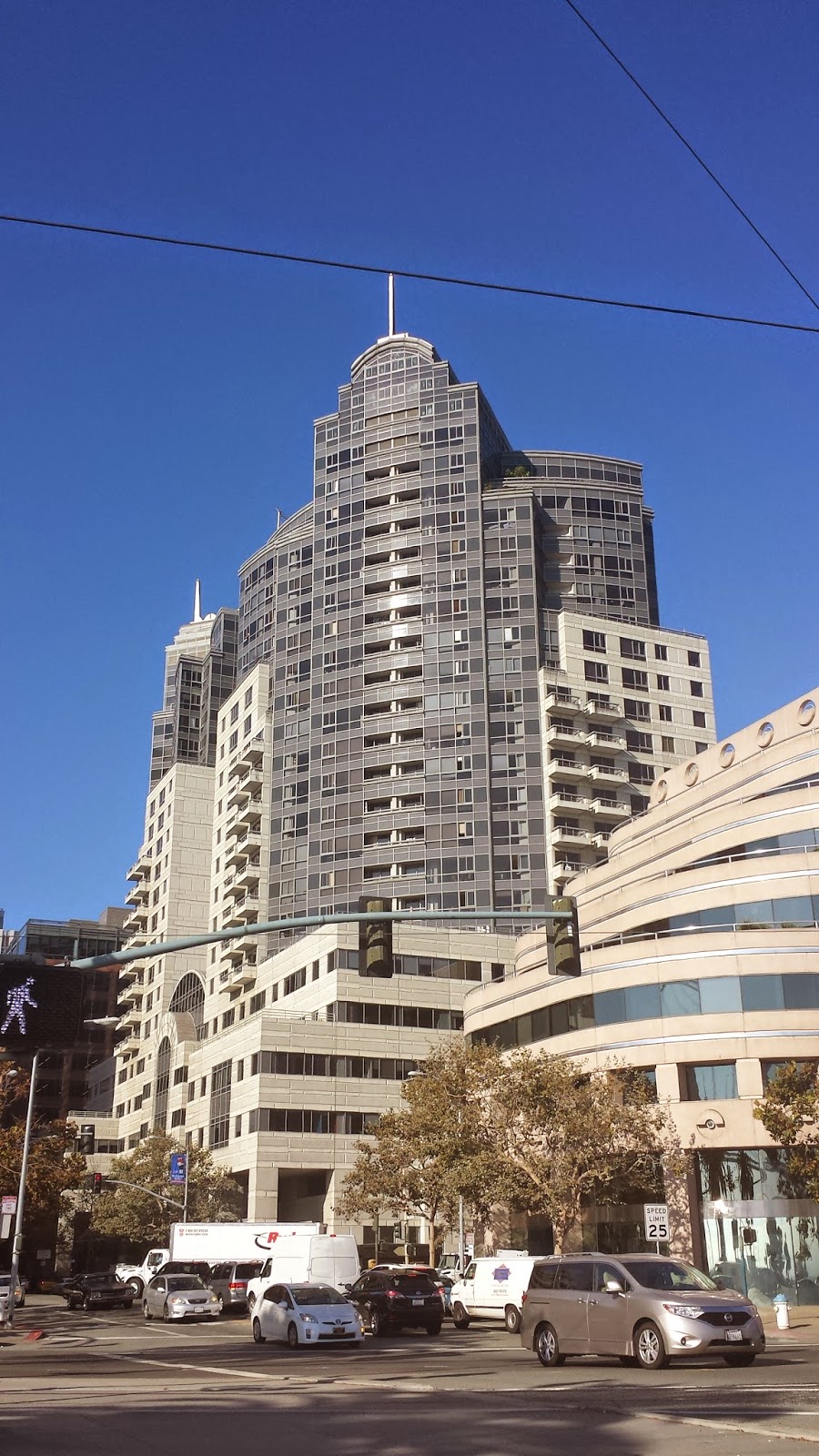 We are on the 12th floor of Rincon Towers located just a block from the bay. I know he is happy just to be staying in one place more than a night, but he also loves the view. And so do we! 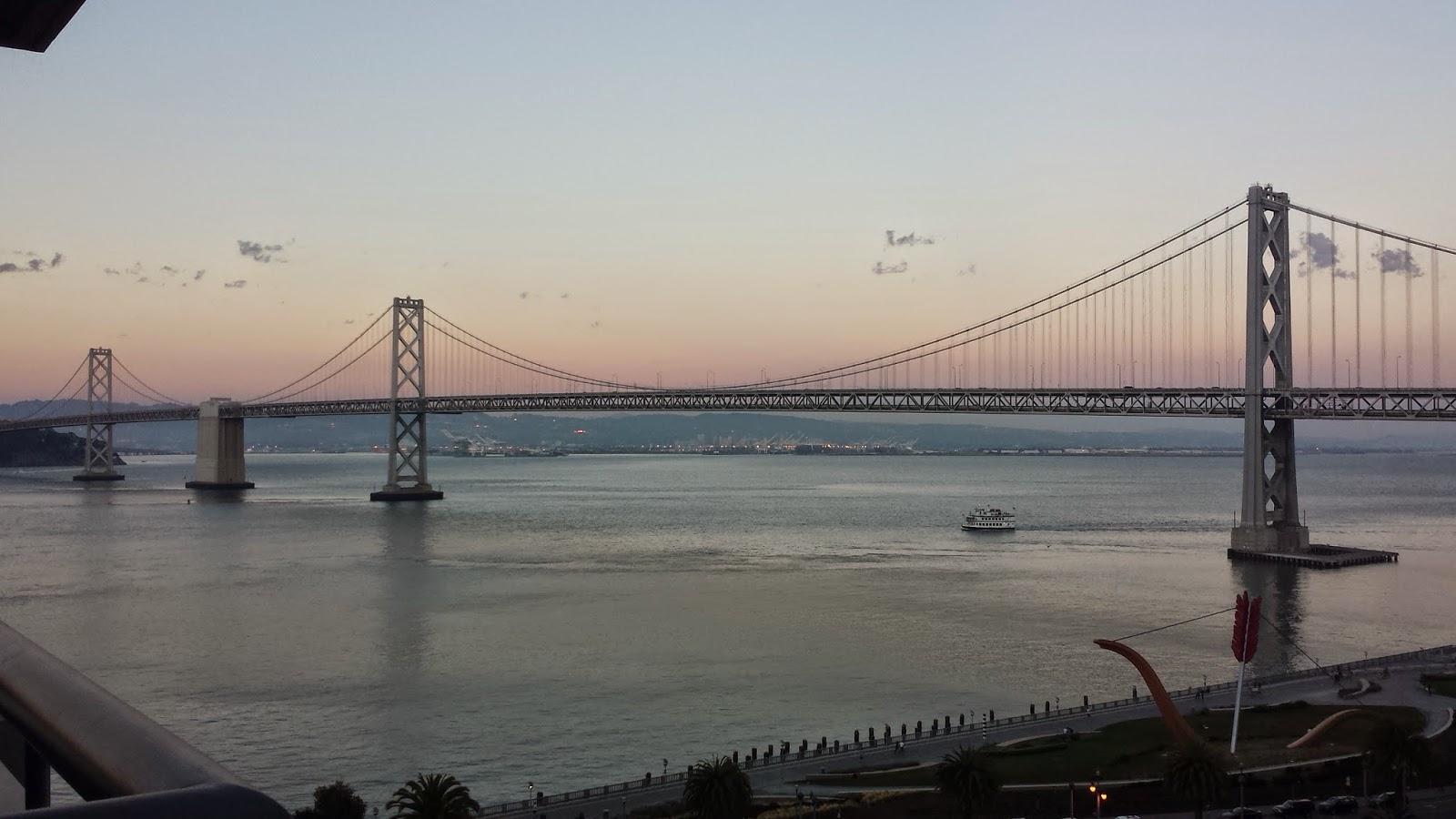 He is constantly looking out the window and talking about the boats on the water or the shooting the people on the streets below. He likes all the noise and lights and commotion, but none of us can get too comfy, because we can't afford the price tag of these apartments after our free month is up. So for now, we are enjoying it while it lasts. Corporate housing was a God send just because of the logistics of moving across the country to a city we've never been to (unless you count when I was 3). We would have been happy to be put up anywhere, but this place is the icing on the cake. And the best view is at night. The bay bridge comes alive at night. Recently, 25,000 LED lights were installed to create a never repeating light show. We sit on our couch or lay in bed night totally mesmerized by it. I'll have to be sure and get a video of it, but here is a picture Adam took the other night of it all lit up. 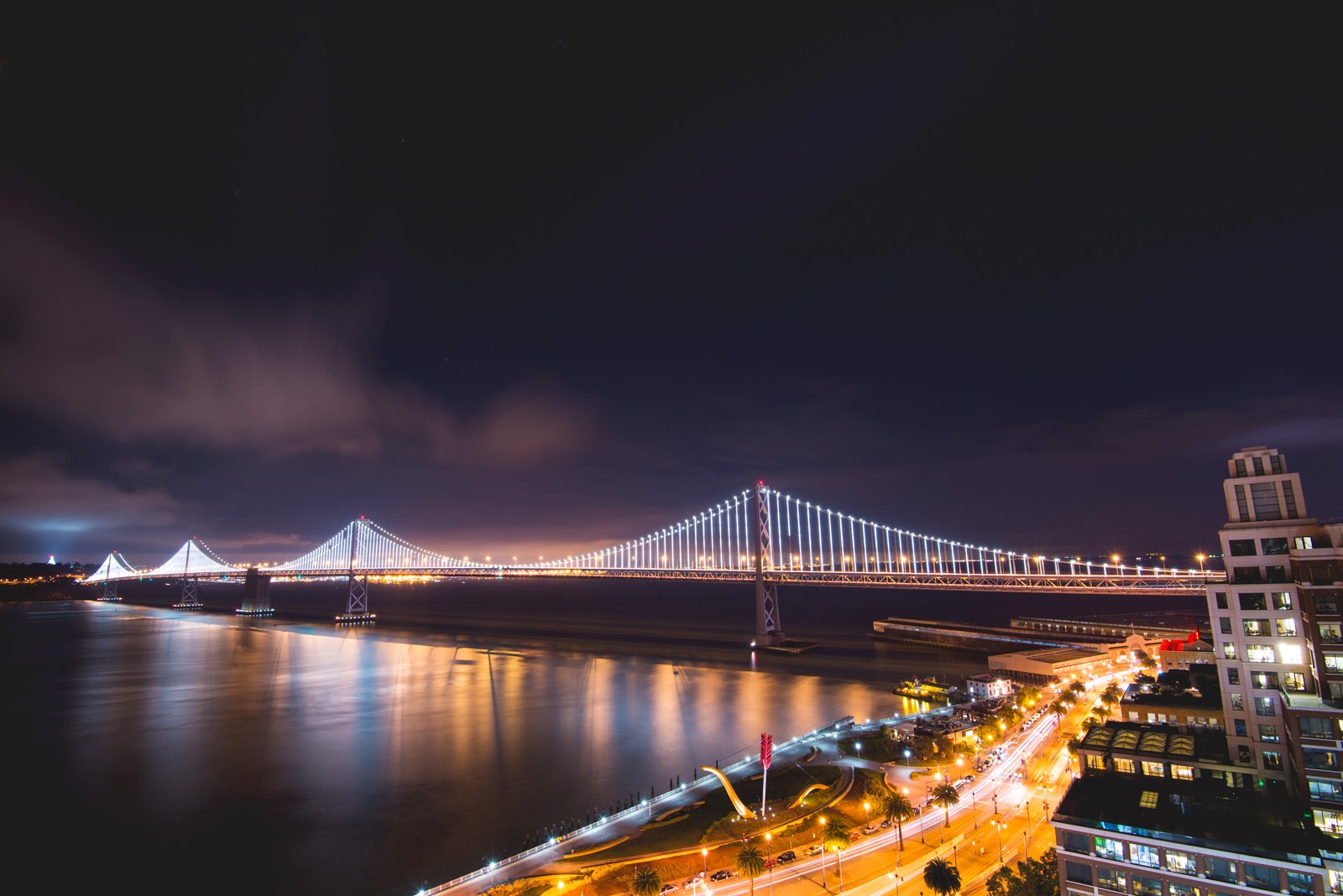 Once we move, I might have to frame this picture just to remind me of the magical month we spent here. Best of all, Adam can walk to work, we can walk to 1,000 different restaurants, and places. The piers are just a stones through away, and the new baseball stadium is only a few blocks. So if you want to visit, now is the time!!!!! This fairytale ends promptly on October 12th.

So needless to say, our first week has been lots of work and lots of fun. I'm going to share more about the places we've been soon, but I wanted to update everyone on the basics. It's hard to keep everyone up to date when so much is happening so fast. Now that we are in a fun, new city and I'm unemployed (at least for one more week), I'm really motivated to keep blogging. Hope you keep reading!