One of the places we were most excited about visiting while we lived out here in California was Yosemite. We had planned on camping in the park for two nights upon getting out here, but our plans had to change when I discovered I had two interviews within the first two days of us arriving. Instead, we decided to go to Yosemite our first weekend here, but the fires in the area had other plans. So we watched the news, waited, and this week things were finally starting to improve. Saturday, when we woke up, we checked the parks cams and things looked good so we headed out. From our house to Yosemite is only 3.5 hours away! It's like a dream come true for us to be so close to such an amazing place. We knew when we arrived that there had been fires and we had seen Mesa Verde National Park years earlier after a large forest fire, but none of that really makes it any easier to drive through an area that has been burned. It wasn't long after entering the park that the devastation came into view. 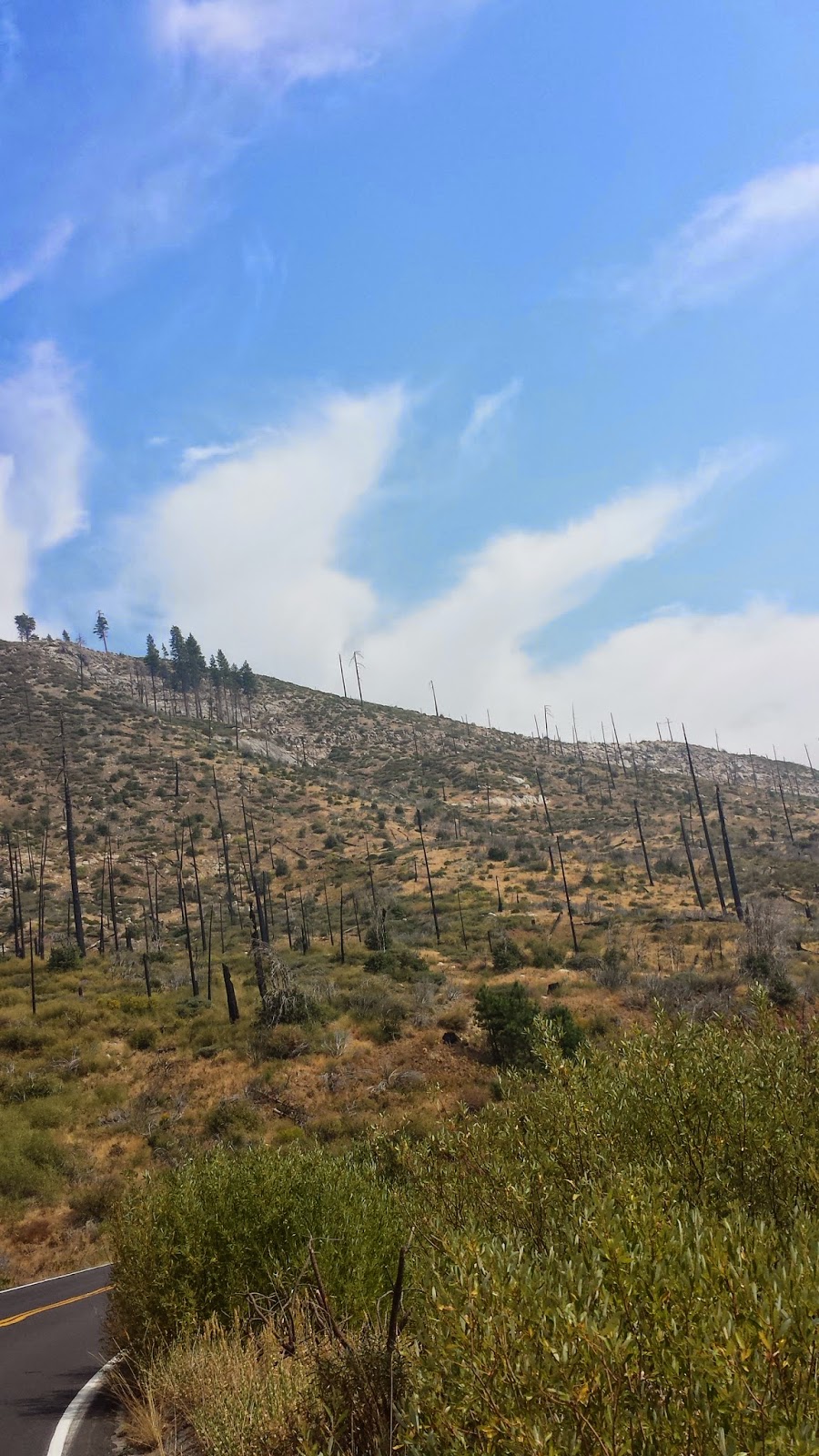 Now fires are two fold. In one instance, they are devastating. They torch thousands and thousands of beautiful acres of lands. They sometimes destroy homes and businesses and, worst case, take the lives of humans (usually firefighters trying to contain it). They are often started by people, but sometimes nature itself can cuse these conflagrations with random lighting strikes. On the other side, they can be nature at work. In the redwoods for instance, fires are part of the natural process because they clear out the forest floor from ferns and allow young redwoods to spring up more easily. Most large redwoods are not even affected by the fire due to their size. The Jack Pine for example, needs fires because the heat allows the pine to open up and release the seeds. As amazing as nature is, the burned areas of Yosemite have left the area looking dead, parse and just plain sad. 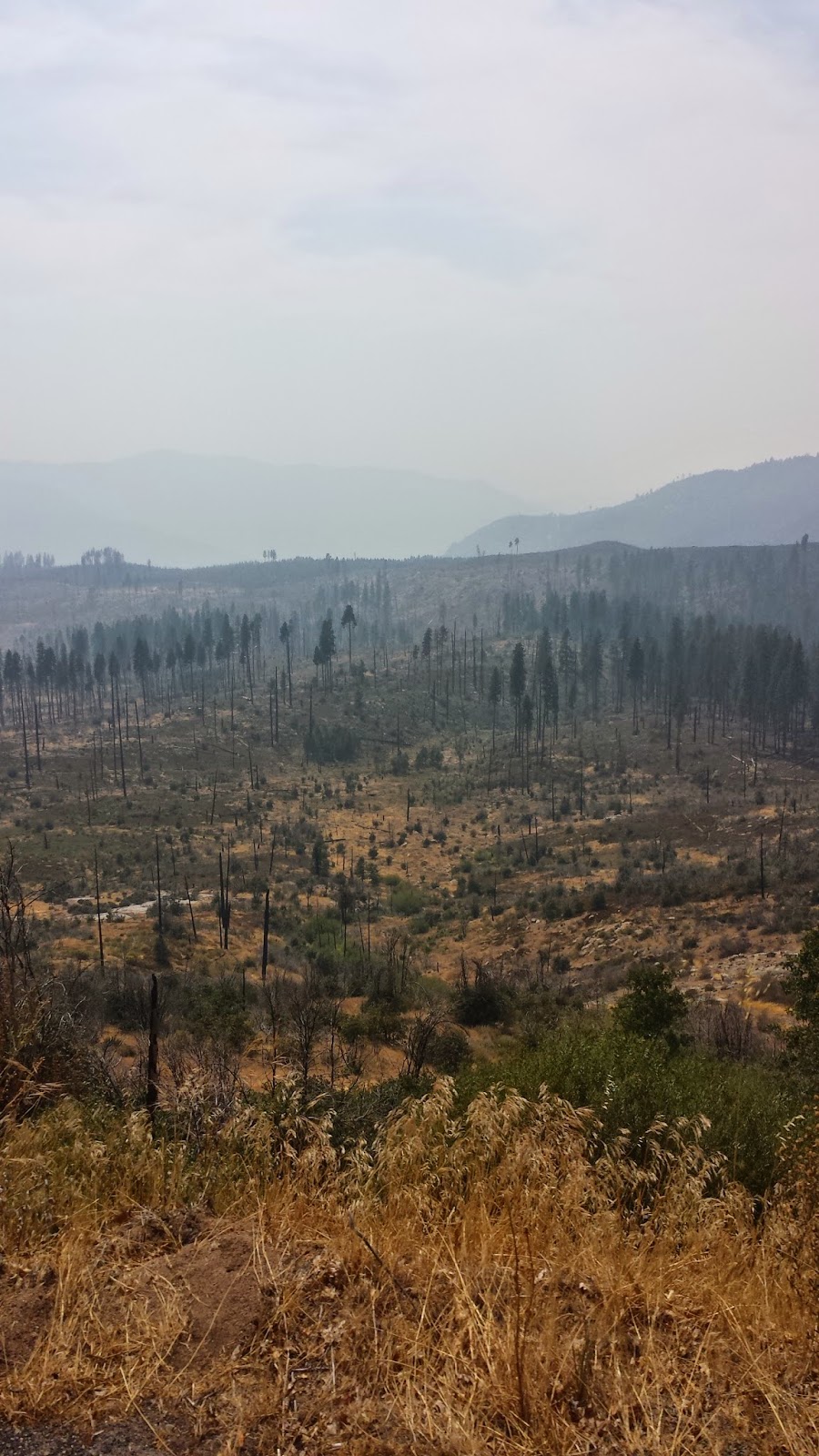 So as we drove into the park and down into the valley the evidence of fire was everywhere, but the park is almost 750,000 acres and as we continued down into the valley the scenery quickly changed.
Our first stop in the Valley was at Tunnel View. It is the perfect place to go first as it gives a beautiful view of both El Captian and Half Dome. Upon arriving however, we realized that it wasn't really a good day to visit after all. The visibility was really low and from tunnel view we could barely make out half dome. 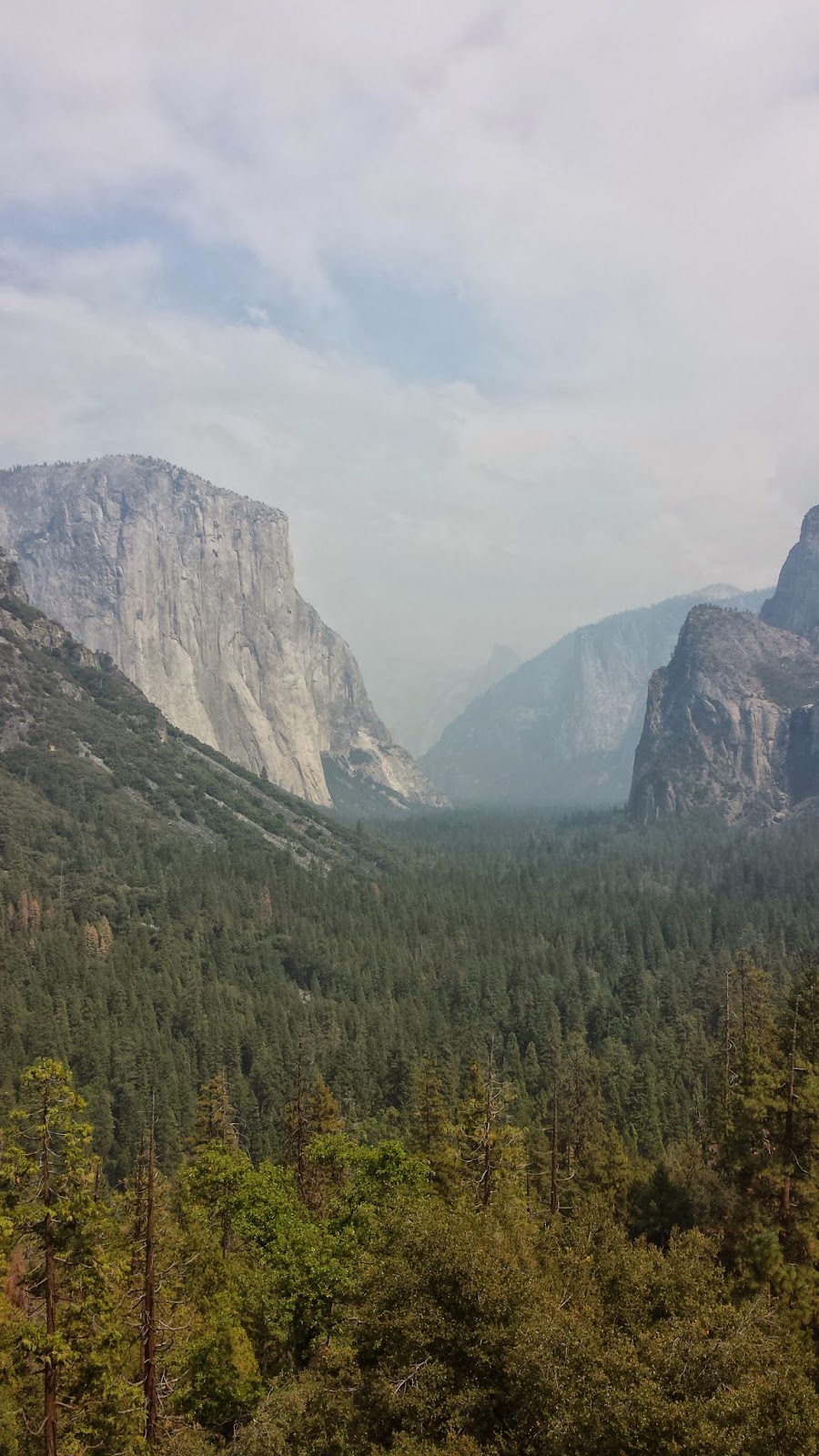 We were pretty sure that the haze was smoke, but having read that all the fires in area were under control we really were not sure. Adam was really disappointed, but the granite rock faces that we could see were so amazing that I was in awe. That, and the fact that we can come back almost anytime, it didn't dampen my spirits. Landon also enjoyed it and we talked about which rock he could go climb. I told him the big one (El Captian), but he decided he was too little and needed to get bigger first. 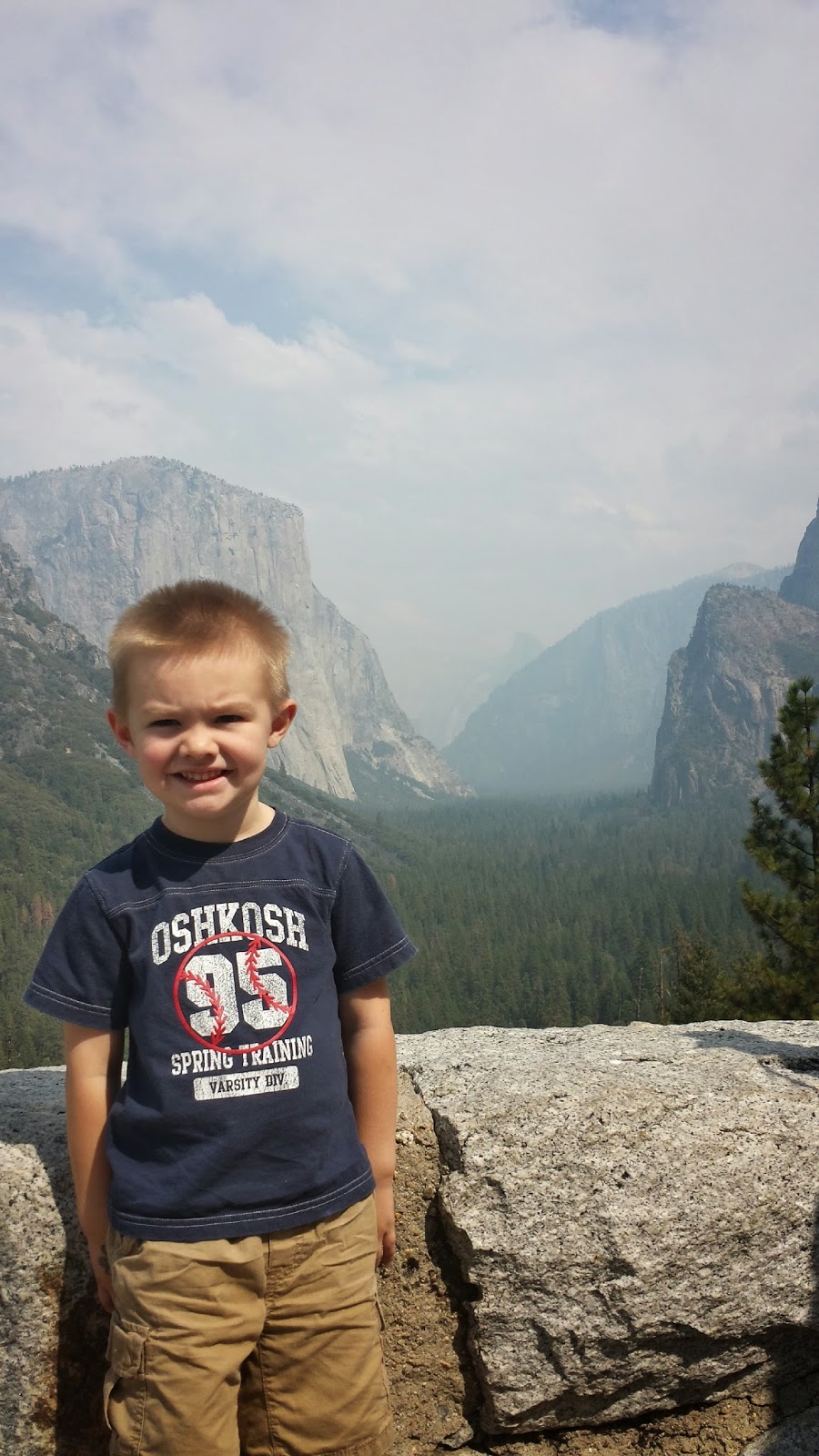 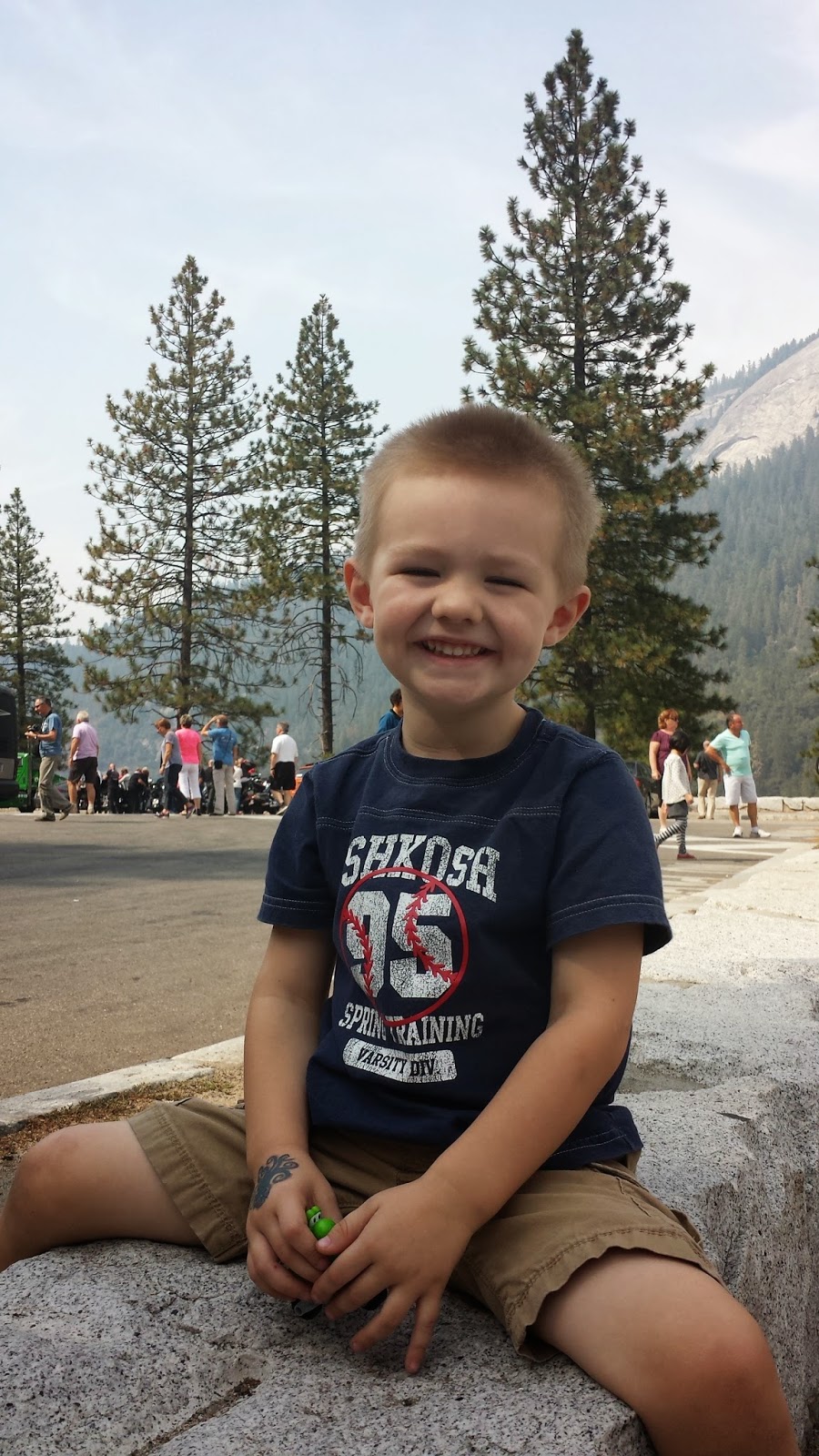 After we took a few pictures and explained to Landon how the rocks were formed, we headed over to the visitor center. It use to be that we would never waste time going to the visitors centers, but we bought Landon a National Parks Passport book to get stamped every time he visits a park and so we have to go there to get them stamped. We figured it is a good way to get him excited about going places and it will be something he will cherish as he gets older. With the exception of visiting Haleakala National Park in Maui when he was 9 months old and Arches National Park on our drive out (because we waited to late to get it and the visitors center was closed) he can have all the stamps from every National Park he visits. We think it's something he will come to really appreciate as he gets older. After getting his book stamped, we visited the Ansel Adam's gallery, the local post office, and had lunch at the deli. I was surprised how nice the vistor's center was and now that we've been visiting them I understand how worthwhile they are. There are all kinds of classes and tours you can sign up for from there. Things we are noting for future visits. I loved the old post office building too. 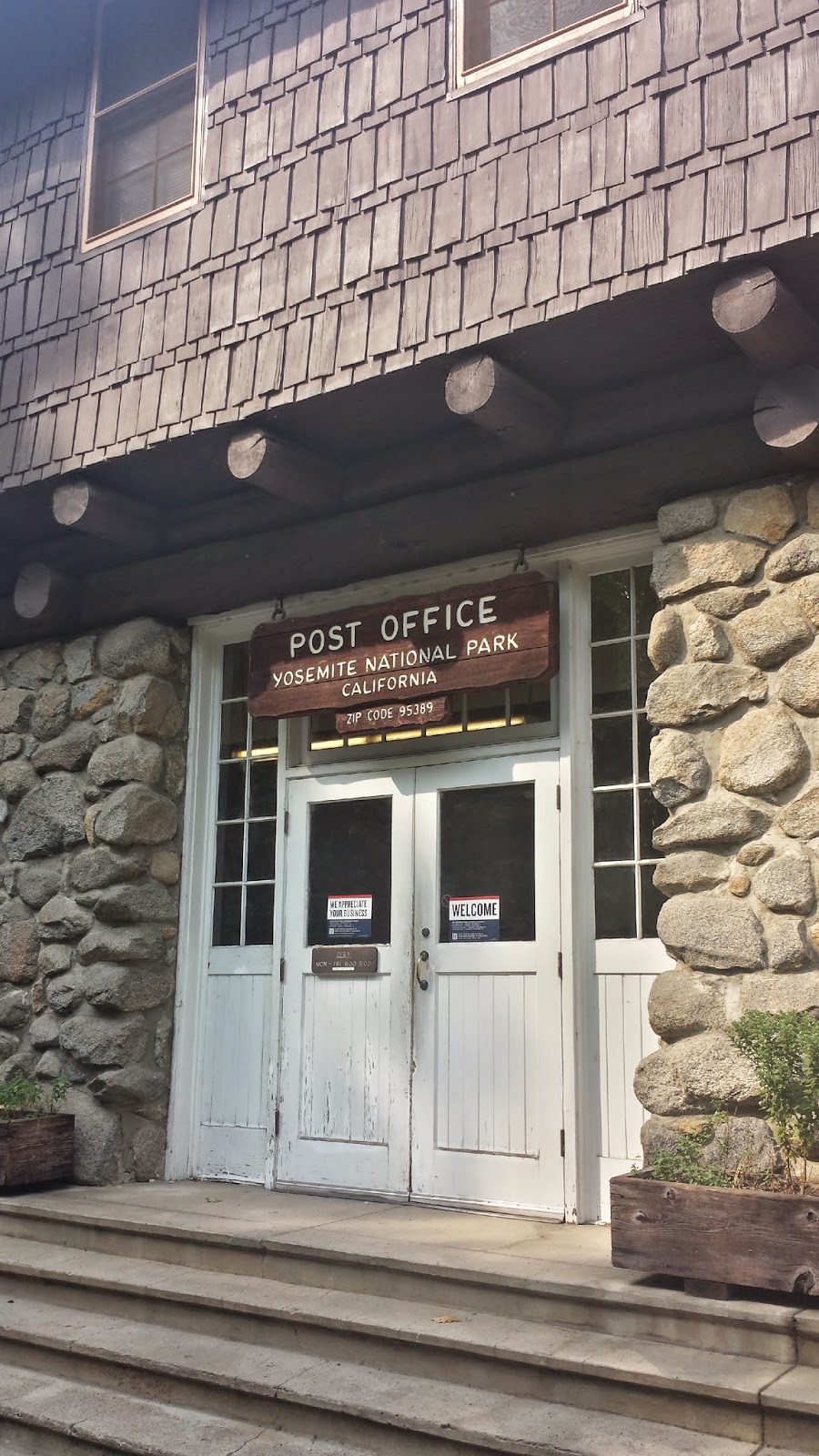 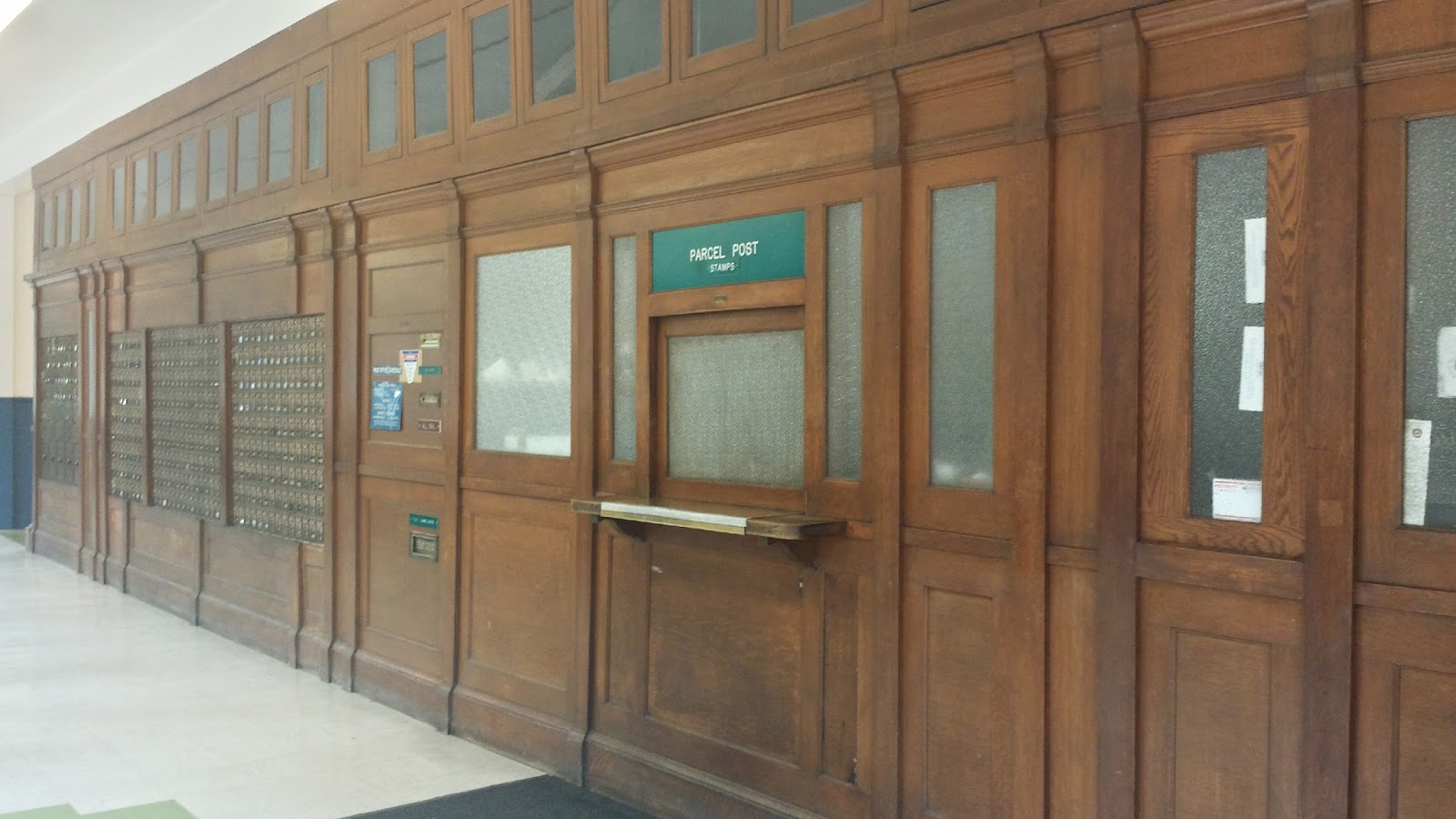 I can just imagine people at the turn of the century sending "post" from there. While we were there we also spoke to a Park Ranger about the visibility. He said it was due to the King Fire which was burning 150 miles away!!!! We read about the fires on our way out and the King Fire has burned over 50,000 acres and it's only 5% contained at this point. It amazed us how a fire so far away could have such a huge impact there. We heard that the smoke may even reach San Francisco. If you want to see more pictures of the King Fire check THESE pictures out by The Atlantic.

We decided the best thing to do would be to head out of the valley and up to higher elevation in hopes that it cleared up some. As we drove out of the valley with the rocks soaring above it was impressive to see a whole perimeter of trees perfectly perched on the edge seemingly tempting fate. You can just barely make out their silhouette. 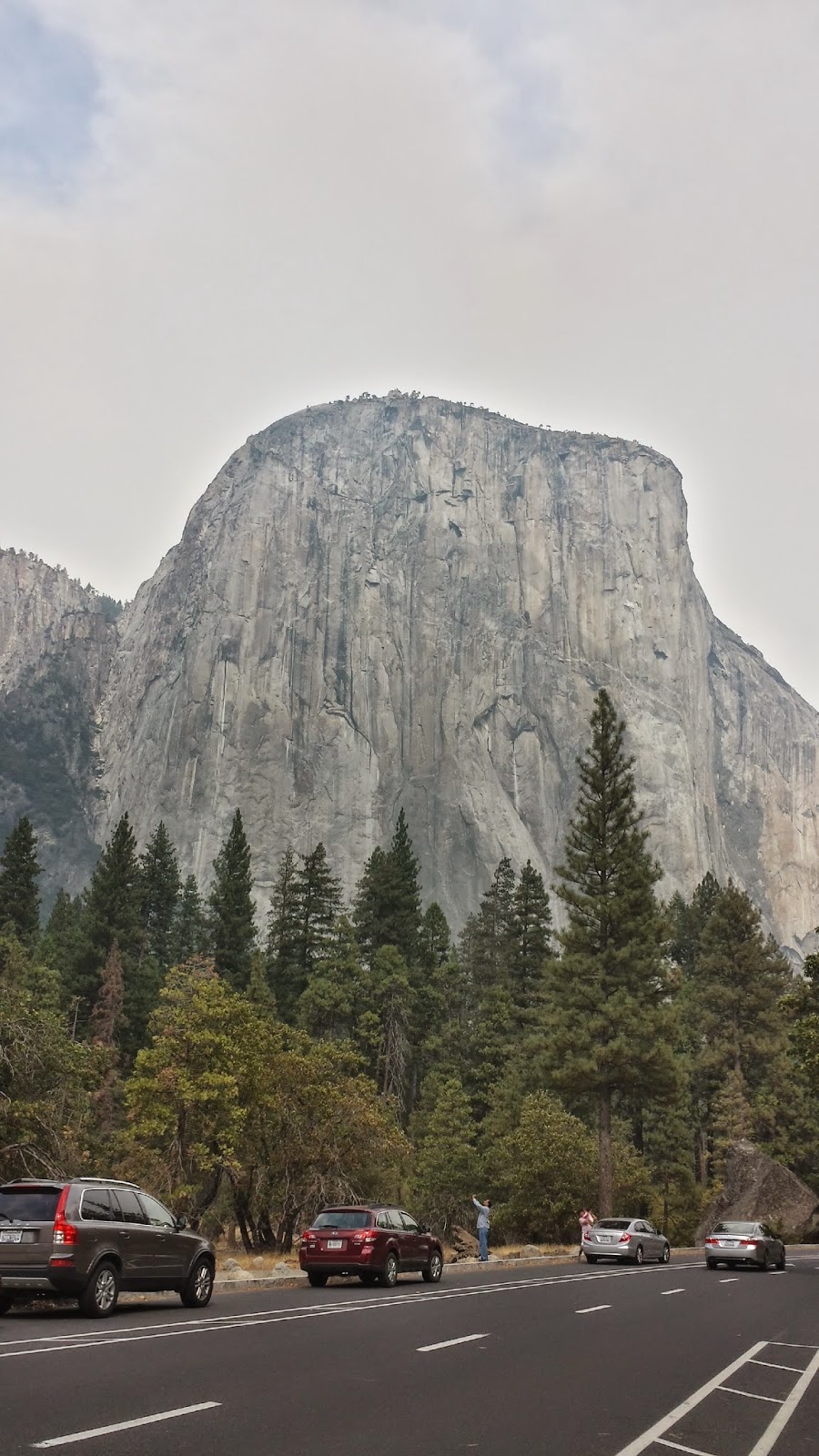 As we made our way out of the valley heading to Mono Lake, we came across a pull off with a great view which was aptly named Valley View. 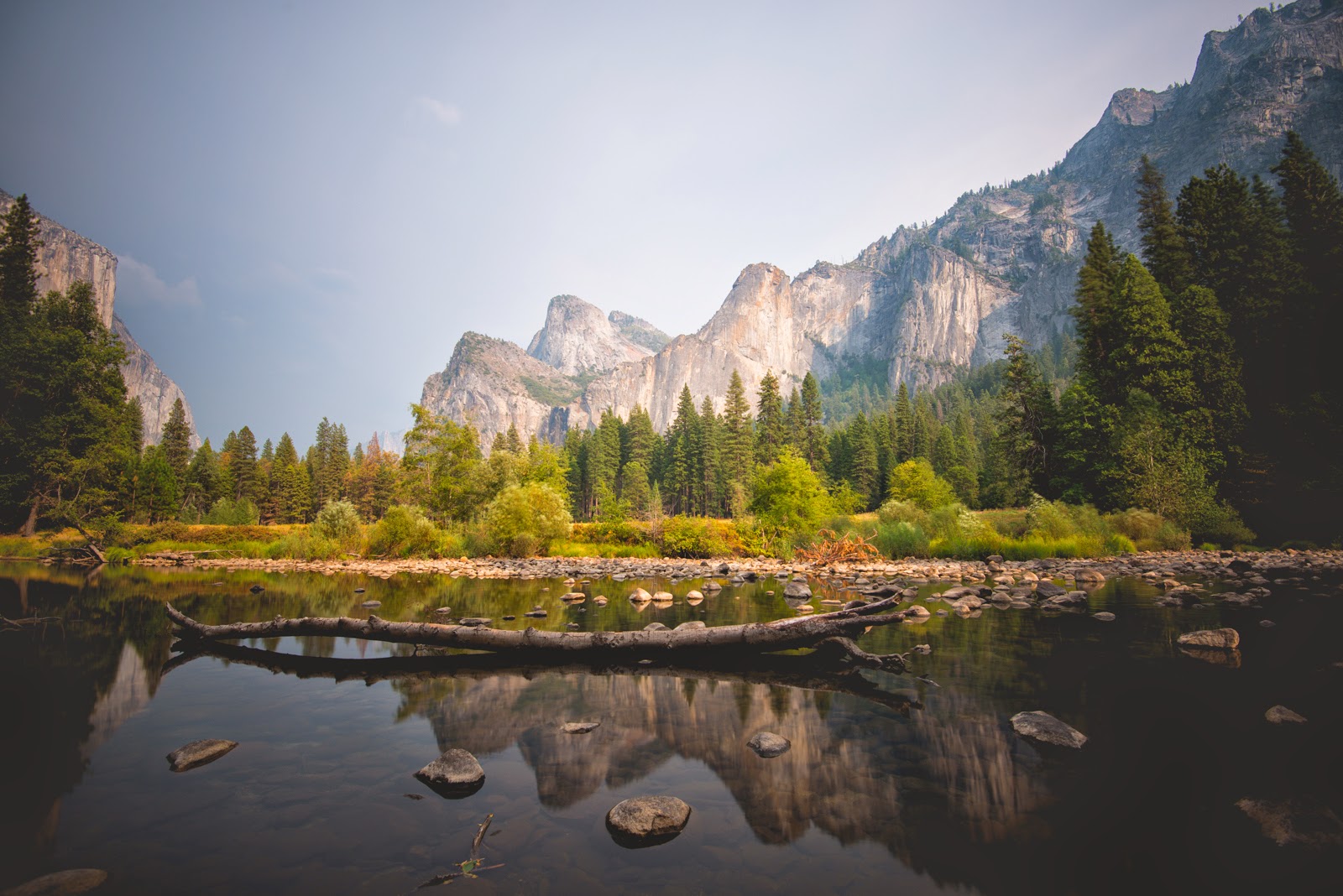 Despite the low visibility this view was still mighty impressive and a place we marked on the map to visit again when the waterfalls are strong (in the Spring). We spent quite a bit of time here with Adam taking pictures and Landon and I playing on the rocks near the water. Being a pull off there are tons of people coming and going through this spot and yet you become so mesmerized at the scene in front of you it almost feels like you are back in 1901 and there isn't another person around for miles. From the picture above that Adam took you can barely see El Captian on the far left of the corner behind some trees. Here is another picture, be it not as good, from my phone which gives you a better look of it. The rock faces are just absolutely stunning! It's not just any rock either, but granite rock. You can see the rocks in the creeks and around and it is all granite. 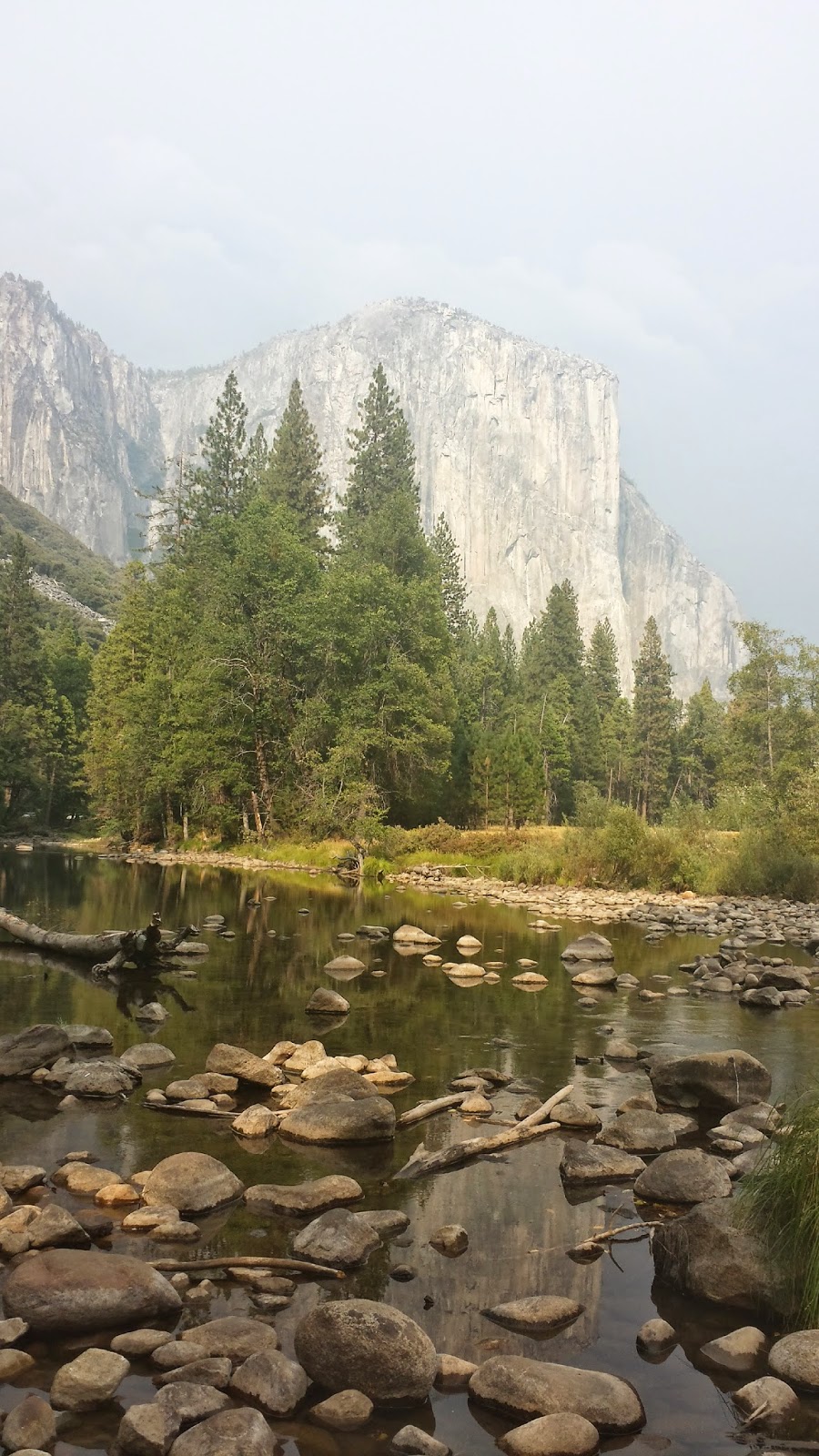 I also took a panoramic just to try to get the idea of what it looks like 360 degrees. As always, it never does it justice.

After we had spent a good bit of time, we left the valley floor and started to climb. As we started to climb from the valley floor our temperatures quickly began to drop. We went from 90 degrees all the way down to 42 degrees. As we climbed we reached another lookout point called Olmsted Point. By this time, the weather was starting to turn and as we pulled in it began sleeting/hailing on us. Lightening and thunder started on the road ahead. It sounds awful, but it made for the most beautiful misty scene at the Point. 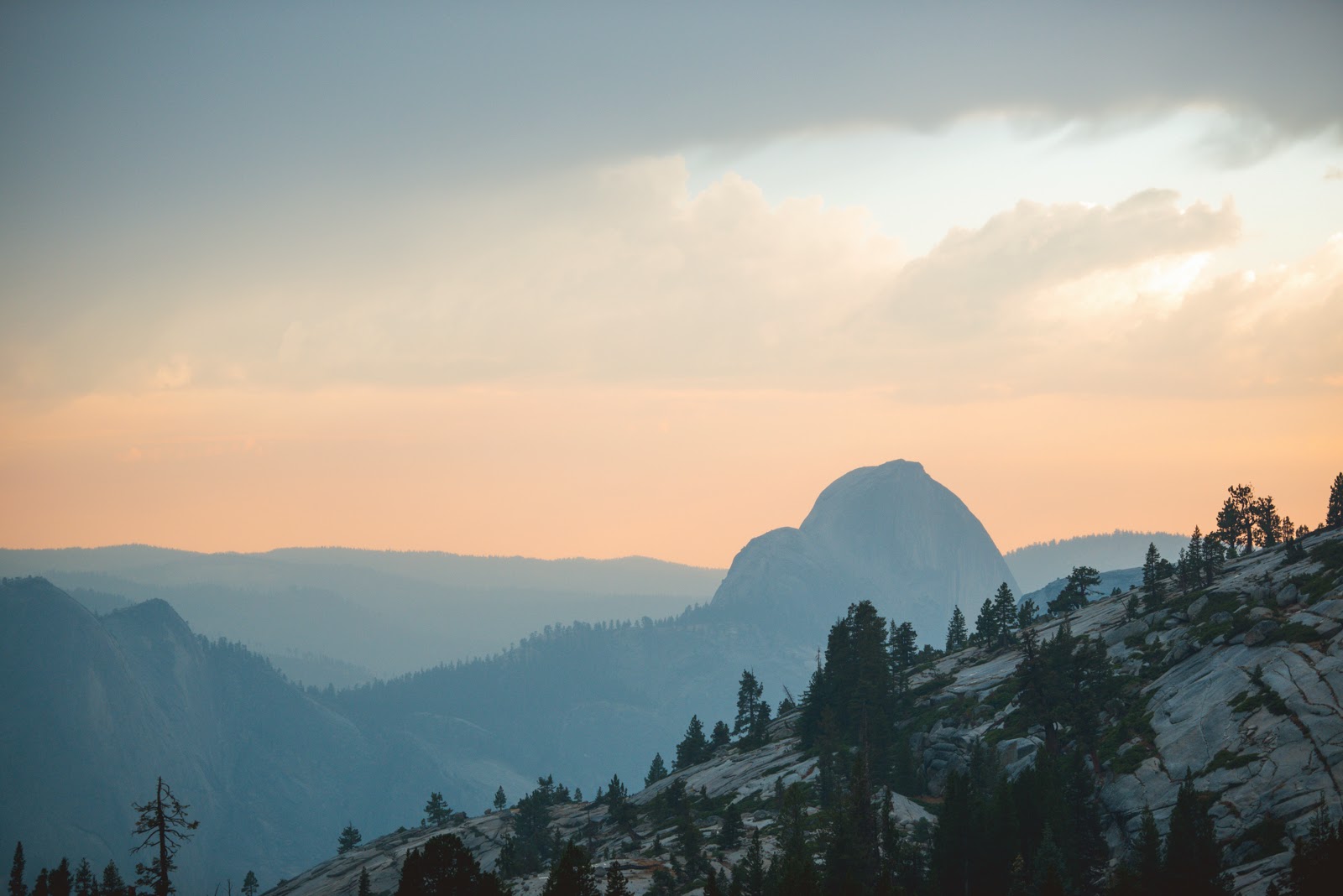 We agreed that it reminded us of the Smoky Mountains that we had visited in June. Once we got back in the car from this point on the landscape became different, but equally gorgeous. Rocks had small groupings of trees seemingly growing straight from little rock cervices sometimes even horizontally. Instead of looking up the rock faces, we were face to face with them right outside our window. We drove past Tenaya Lake and given the current conditions a gorgeous mist was settling over the water. Despite the rain, we knew we had to pull over and with an umbrella Adam snapped some pictures. It was breathtaking! 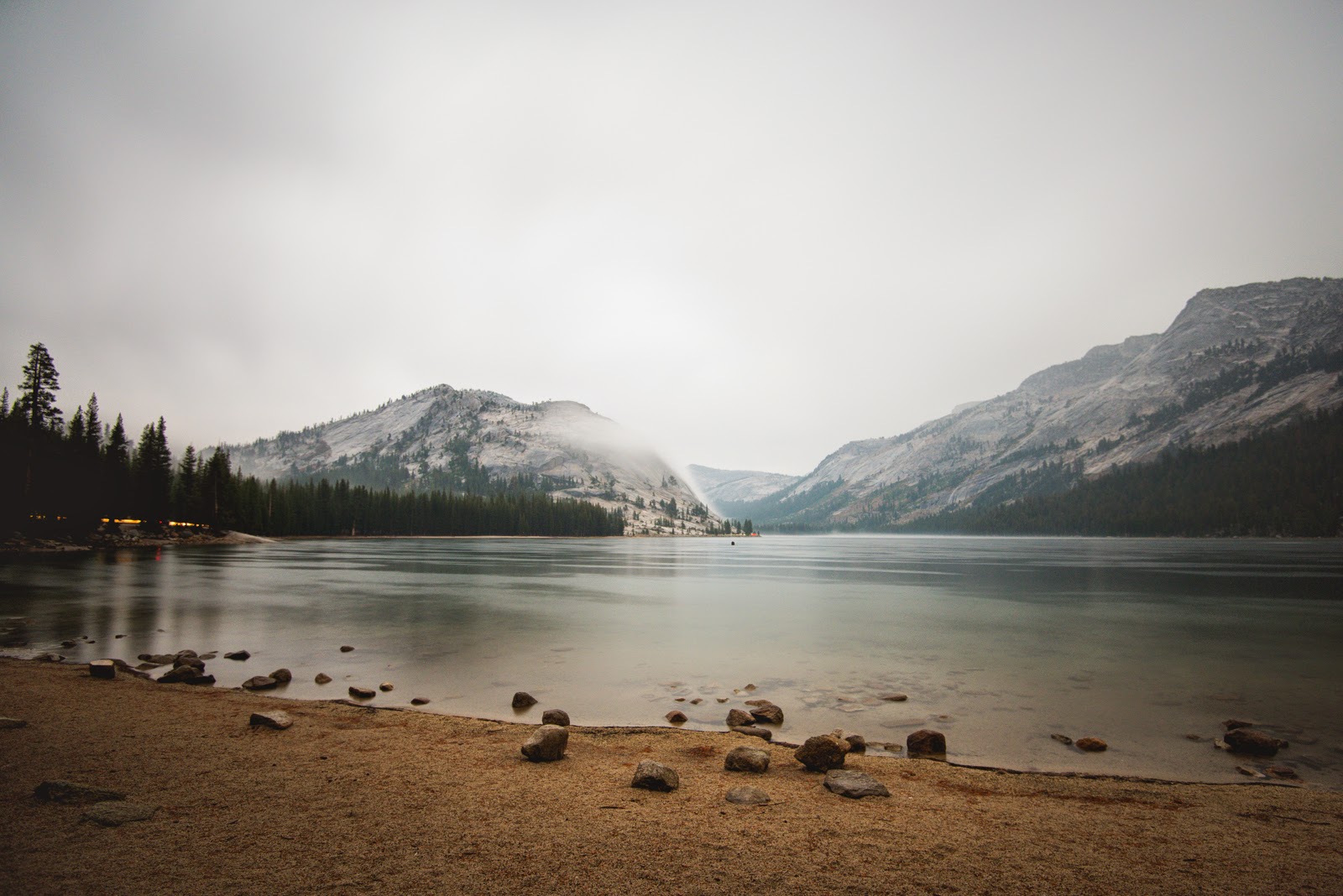 We continued on and came into Tuolumne Meadows which was the place we were supposed to camp a few weeks prior. Already at 45 degrees in the late day we knew our we had missed our chance to camp here this year. It was so pretty though and now we know that we want to go back and next Summer and be sure to stay at least a night or two. Adam realized that we were officially in the High Sierras a place he always thought he would love and want to explore in depth and he was in heaven as we drove along with this idealistic scenery in front of him.

It wasn't far past Tuolumne that we left Yosemite and crossed into Inyo National Forest. Once in Inyo, we began to descend down towards Mono Lake. I watched as the road dropped down drastically a few feet from our car. 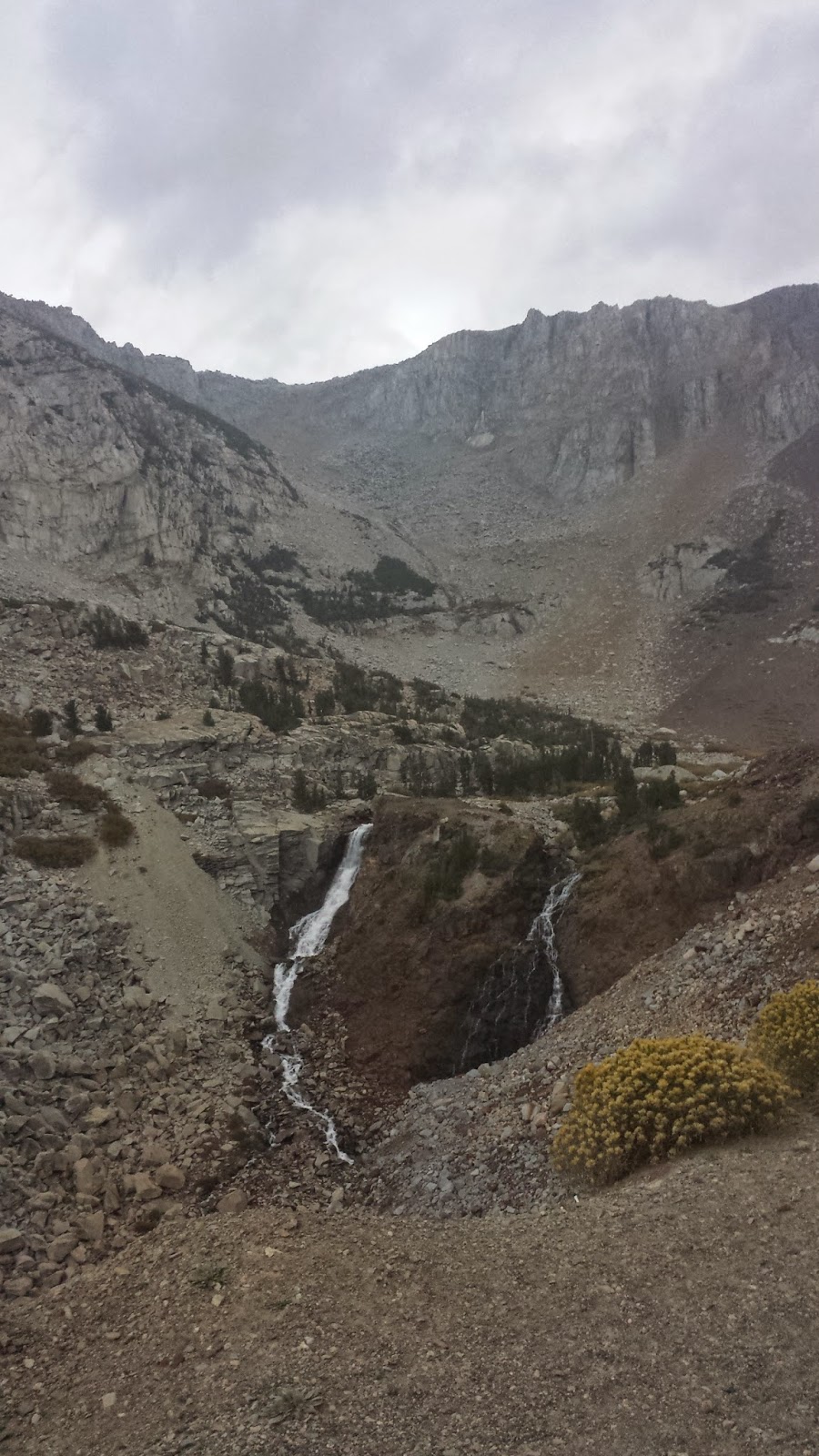 We reached the lake not long after the sun had set, but by this time it was pretty dark. Adam had wanted to photograph the salt pillars that build up in the lake, but given the dark stormy skies and the lack of sun it was too dark by the time we reached the water. 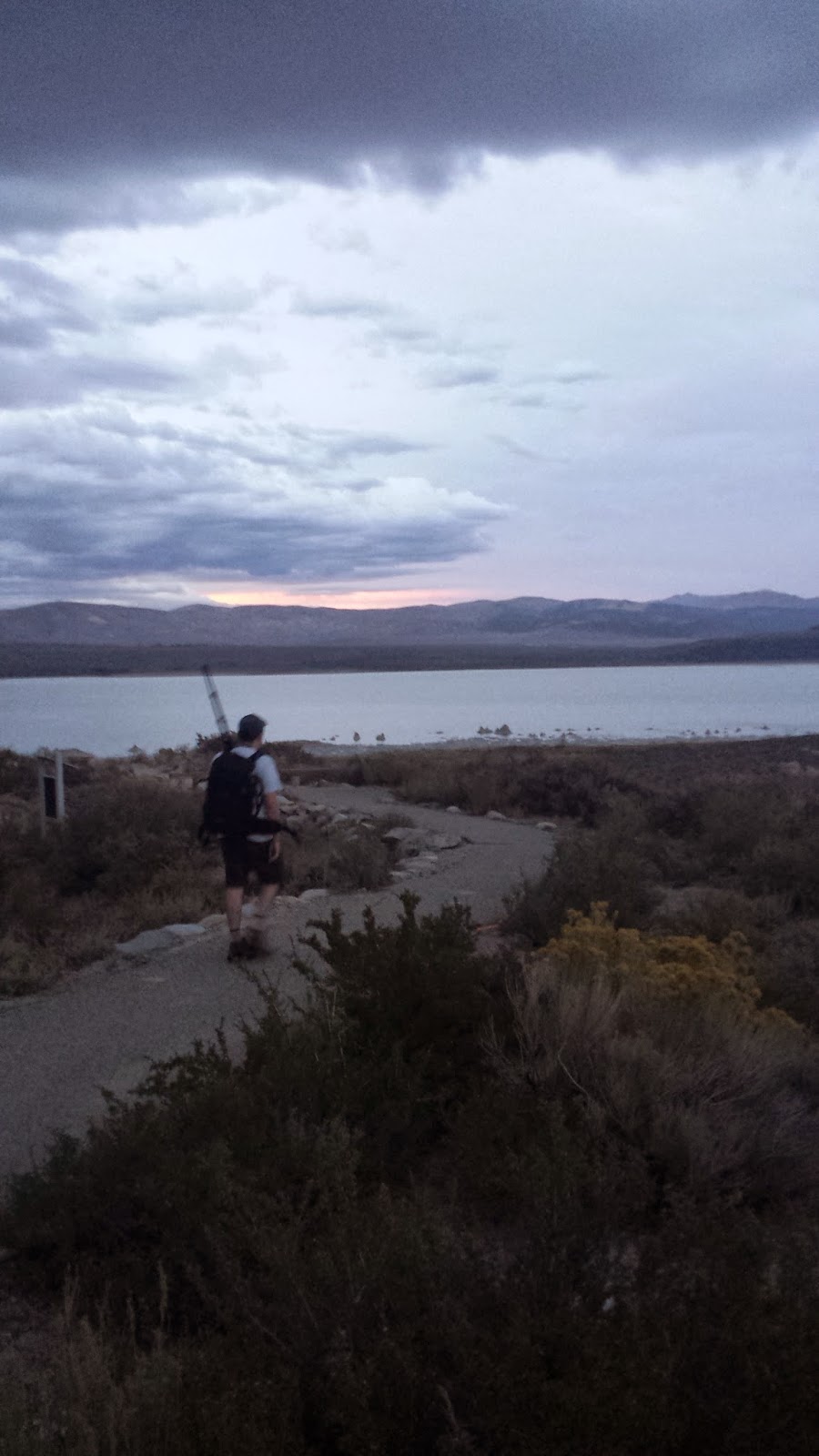 We opted instead to sit and watch it for a bit while Landon played in the sand. It was a really pretty lake and a place we would like to visit again when we have more time.

After a bit, we got back into the car for drive back home, which from this spot was almost 5 hours. Once we turned on the 108 and entered Stanislaus National Forest we saw a sign that read 26% grade slope, another not long after alerting that cows were free range and could be on the road for the next 4 miles and another which said that next 24 miles were constantly curved. By this time, it was 8pm and completely dark. It is impossible to describe just how hilly and curvy the road was other than to explain that we passed the Marine Corps Mountain Warfare Training Center. By this time we were in some serious mountains. There were reflective markers all along the roadside over 10 feet tall in some places. These markers are used to find and plow the road after large snowfalls. When we got to an elevation of over 9,000 ft we saw signs that the roads would not be plowed during snow. Just another place to add to our list of places to explore.

It was after 1am when we finally got home. While it wasn't the exact day we had planned, it ended up being a wonderful/unexpected visit to Yosemite. We were able to get our bearings of the park and get an idea of where we want to visit/hike and what we can fit into a day. We know we will be going back often and next Summer I want to get the permit to climb half dome as well as spend a few days camping in Tuolumne Meadows.I hope the next time we visit the fires don't disrupt our views, but in such a magical place any visit is worthwhile.
Posted by Unknown at 6:24 PM