A New Type of Thanksgiving

This year, Thanksgiving was very different from all 28 in the past. With the exception of one year when I had a stomach bug, I've always spent Thanksgiving with lots of family. Even last year when we lived in Nashville, we came up to Louisville to celebrate Thanksgiving with everyone. We've stayed home a few times on Christmas, but never Thanksgiving. This year, we didn't have a choice.

So on this Thanksgiving morning, I didn't get up early to take a shower. Honestly, I didn't shower at all. I didn't get an early start cooking dishes to take to my Dad's house. I didn't pick out a cute Thanksgiving outfit for Landon or dress up myself. Instead, Adam got up with Landon around 9am and they let me sleep in. I woke up at 10:30...on a holiday! Once I was awake, we made some cinnamon rolls for breakfast and talked about what we should do for the day.

We decided to go to Golden Gate Park which is the central Park of San Francisco. We quickly found out that it has a little bit of everything including a number of playgrounds, a few dog areas, bike trails, a number of lakes, an art museum, botanical gardens, a Japanese Tea Garden, and a designated area for every sport you could ever imagine. Before we could see it we heard music blaring from a small concrete area and came upon the roller blading/skating rink. 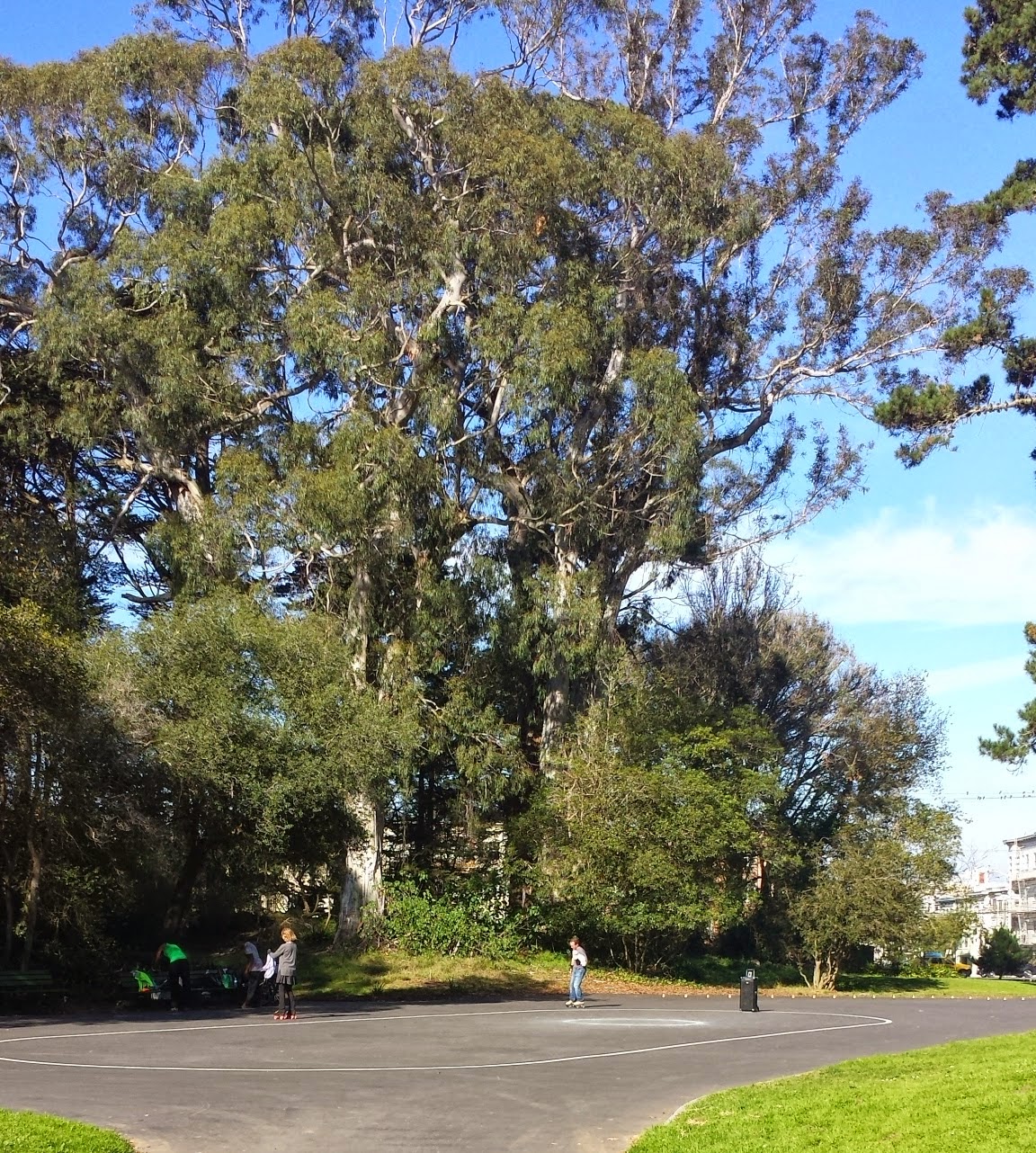 We weren't quite prepared for sports, but that didn't matter because even if you don't have your own equipment they have all types of bikes to rent. Or peddle carts for the whole family. At the boathouse you can also rent paddle boats for a trip on the water. And for people who aren't inclined for physical activity, we saw a number of open air, two person motorized cars for audio tours through the main roads of the park. We happened to have Kaiser with us so we pointed out places on the maps we'd come back to another time and noted some activities we will try. Beyond the plethora of activities, the park is the perfect place for a stroll as it is a welcomed oasis in the vast concrete jungle of San Francisco. With lush greenery for miles, my Mom will be happy to know that there is also a TON of green grass. We went just to walk around for a bit of exercise for the boys and explore some new places. It wasn't long until we stumbled upon one of the playgrounds. Naturally, Landon had to stop and play for a bit. 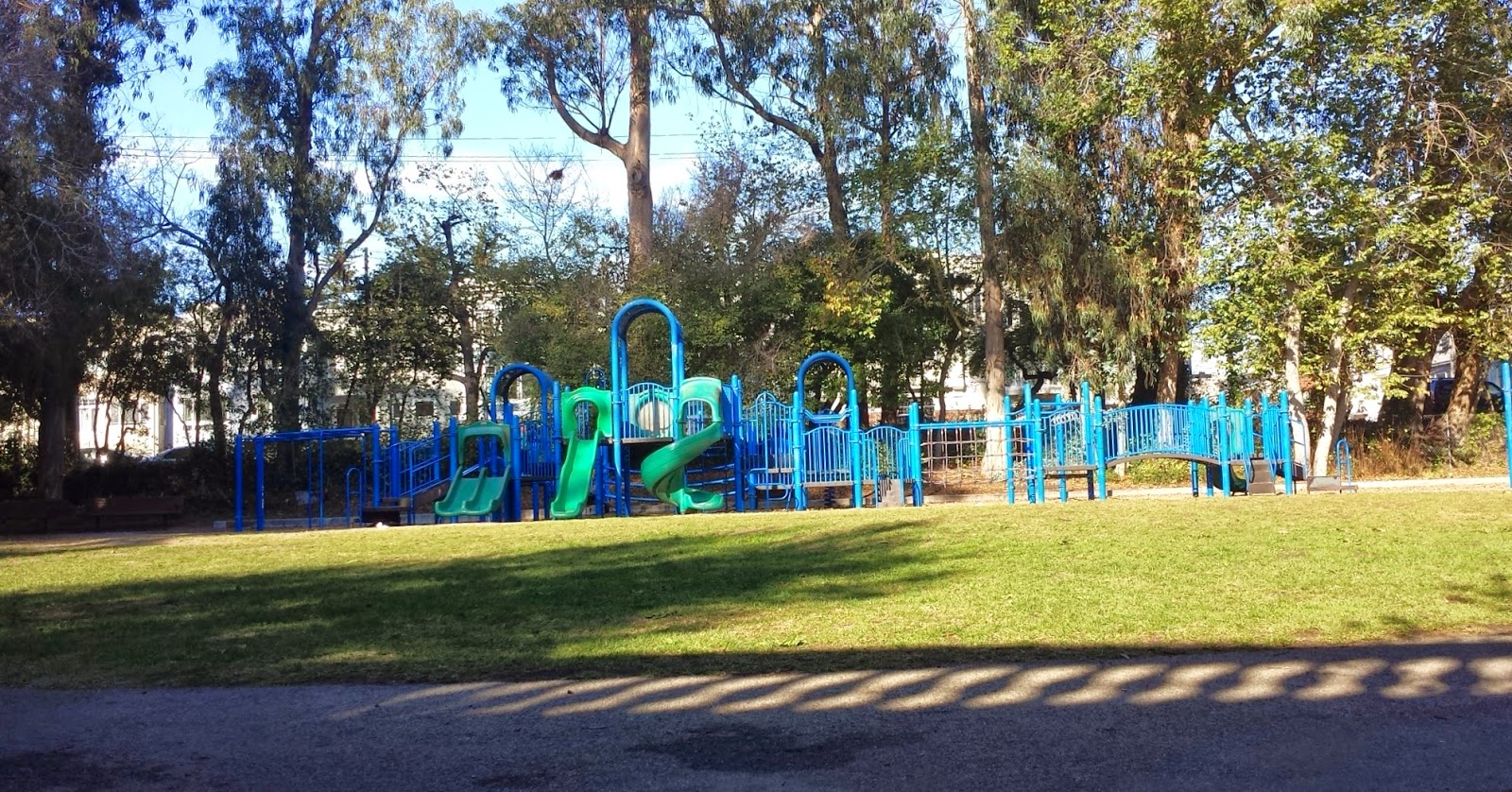 With a peanut butter sandwich for convincing, we left the playground and headed down one of the paths to discover more of the park. We passed the conservatory of flowers, which seems to be the perfect place for a picnic, but didn't linger as it said dogs were not supposed to be in the area. 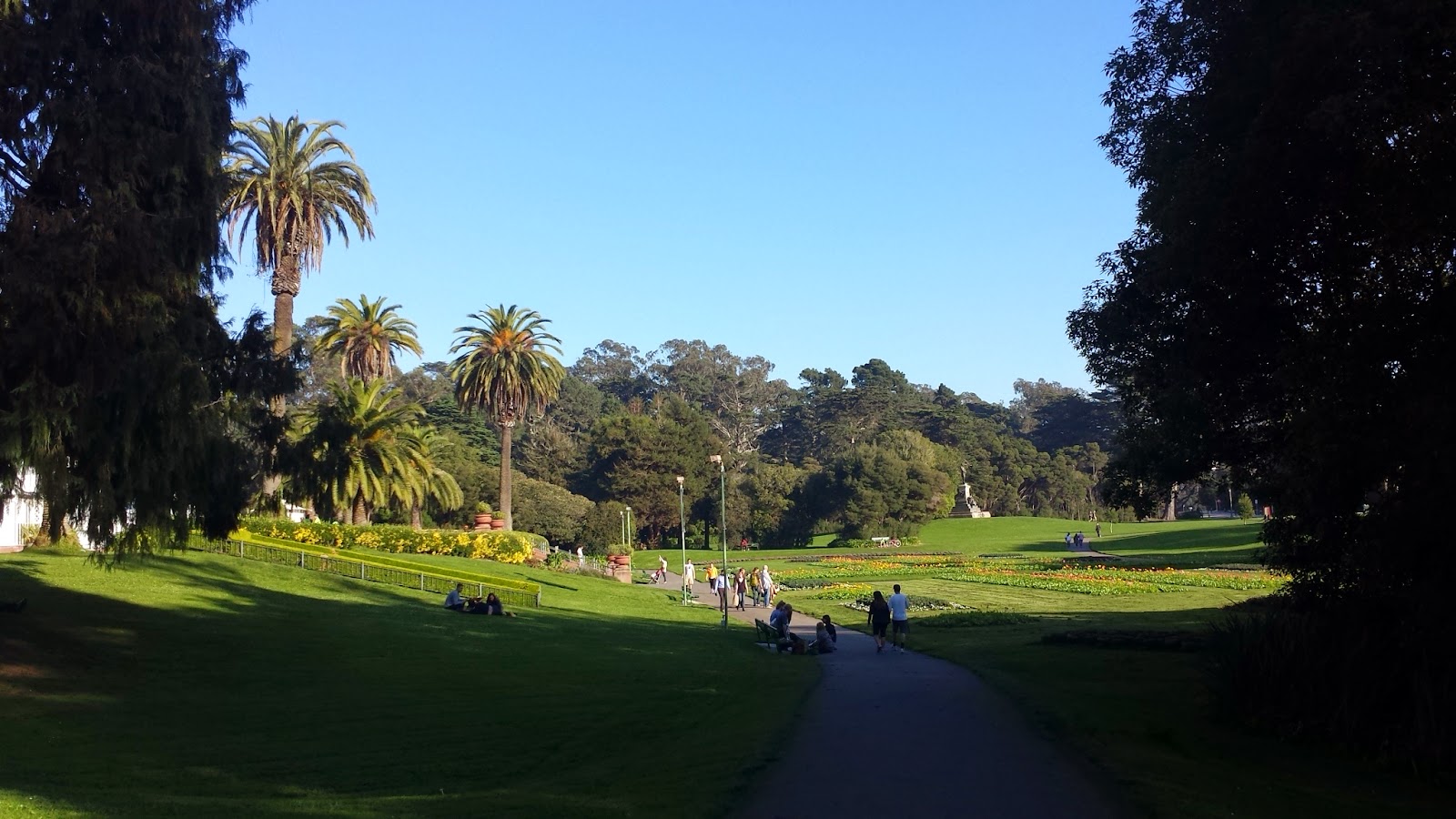 We continued past the De Young Museum, a fine arts museum in the middle of the park, which supposedly has commanding views of the park which are supposedly laid before you in 360 degrees from the museum's tower. Across from the museum is a music concourse which is littered with fountains. It ends at an amphitheater that is a host to a number of events throughout the year. Nearby, we passed the entrance to the Japanese Tea Garden. From what we saw from the outside, it very much represented the gardens in Japan. An entrance fee is required and dogs are not allowed, so we snuck a look inside and put it on the list of things to do another time. 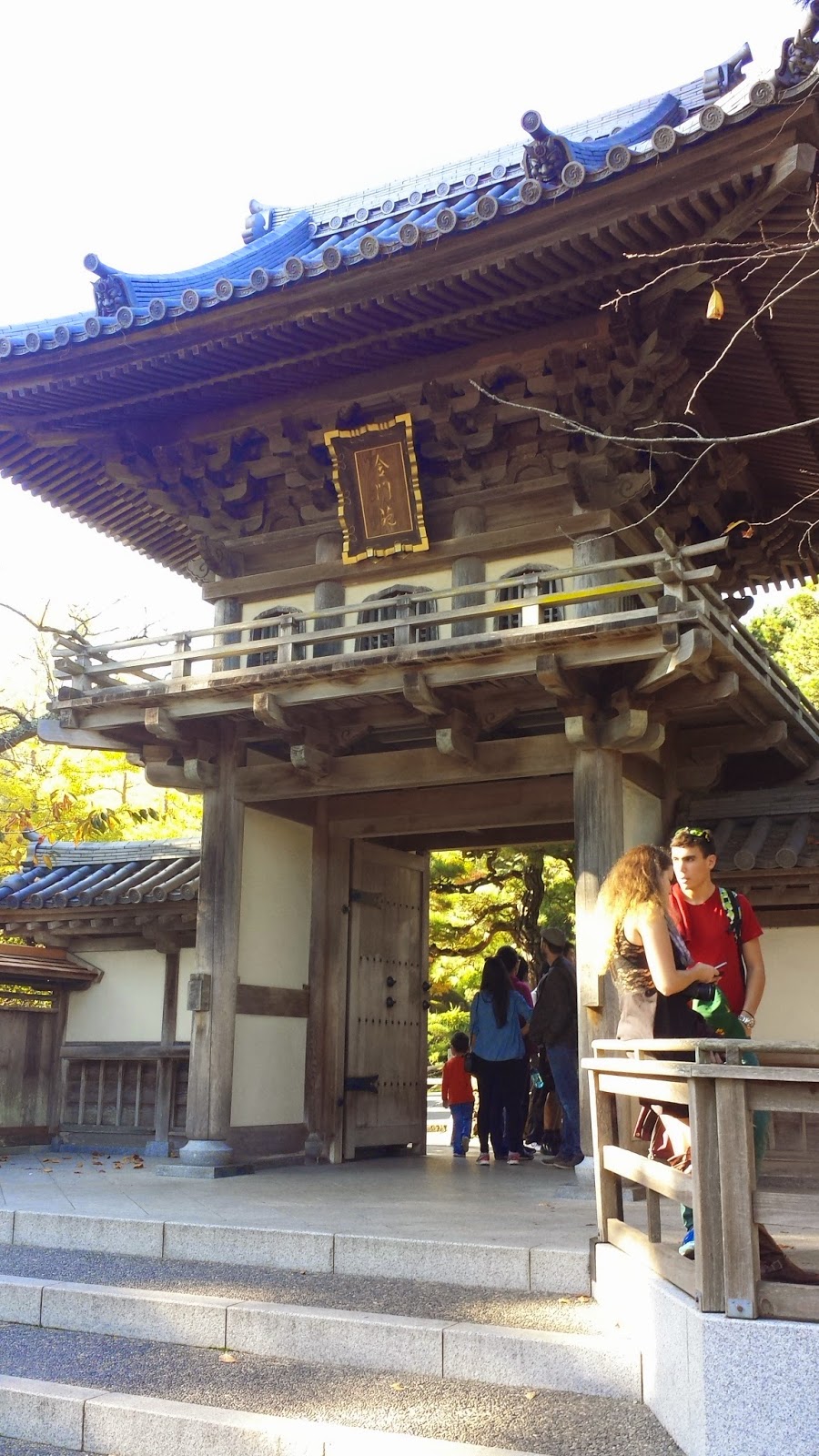 We continued on and found Stow Lake, a man made circular lake where you can rent the paddle boats. A number of people were out on the lake enjoying just that. The lake was full of different ducks and birds and we walked around it for awhile before making our way back in the direction of the car. 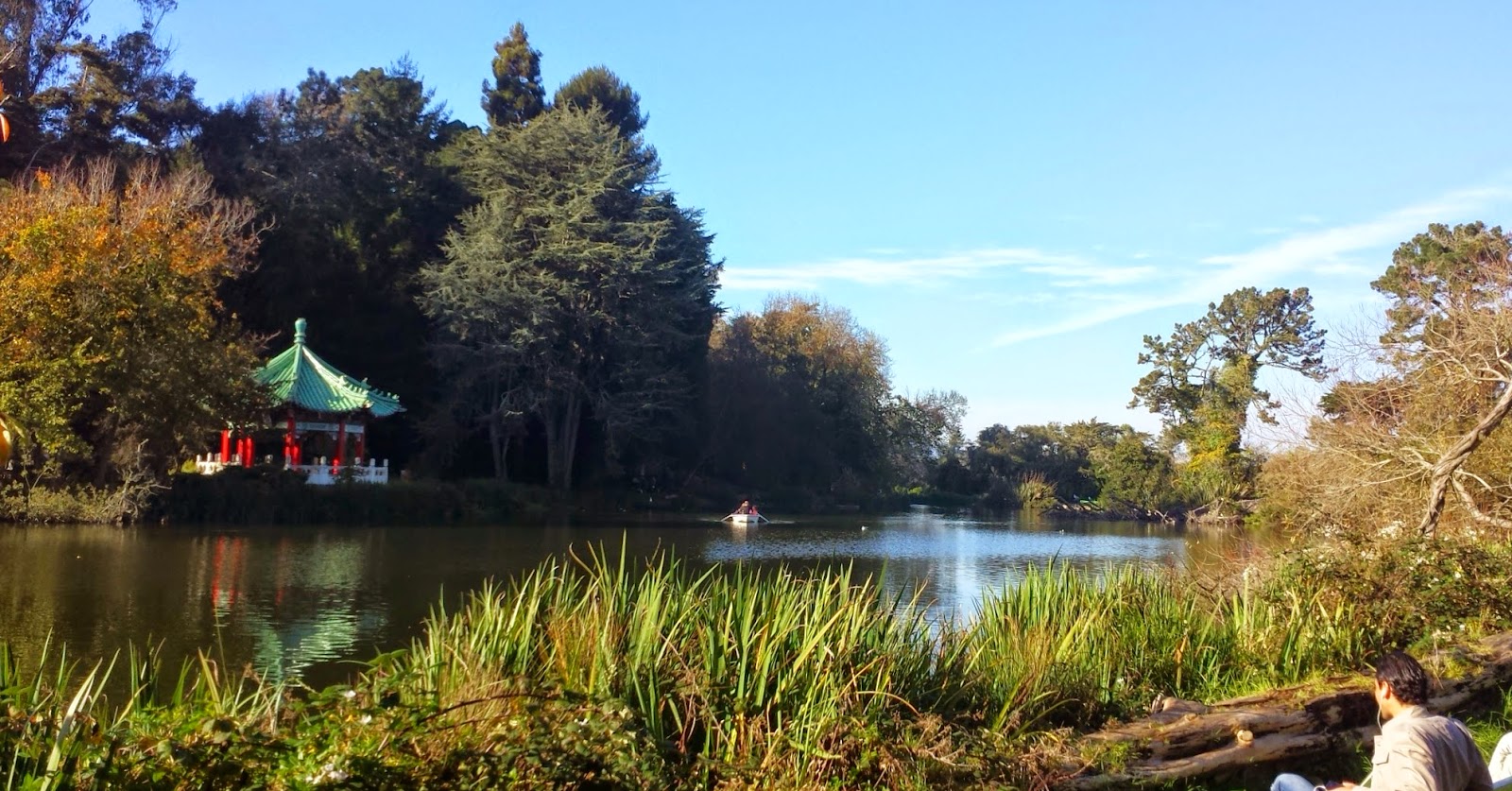 I really enjoyed the park as it was a welcomed and unplanned new experience not far from our house. San Francisco has the most beautiful parks. The number of activities and events is unending, but the park itself is what steals the show and no two feet are the same. From bamboo gardens to rose gardens, pines to catcus, we saw a little bit everything on our short adventure. These were my two favorite tress of the day. They don't even look like they would grow in the same part of the world. 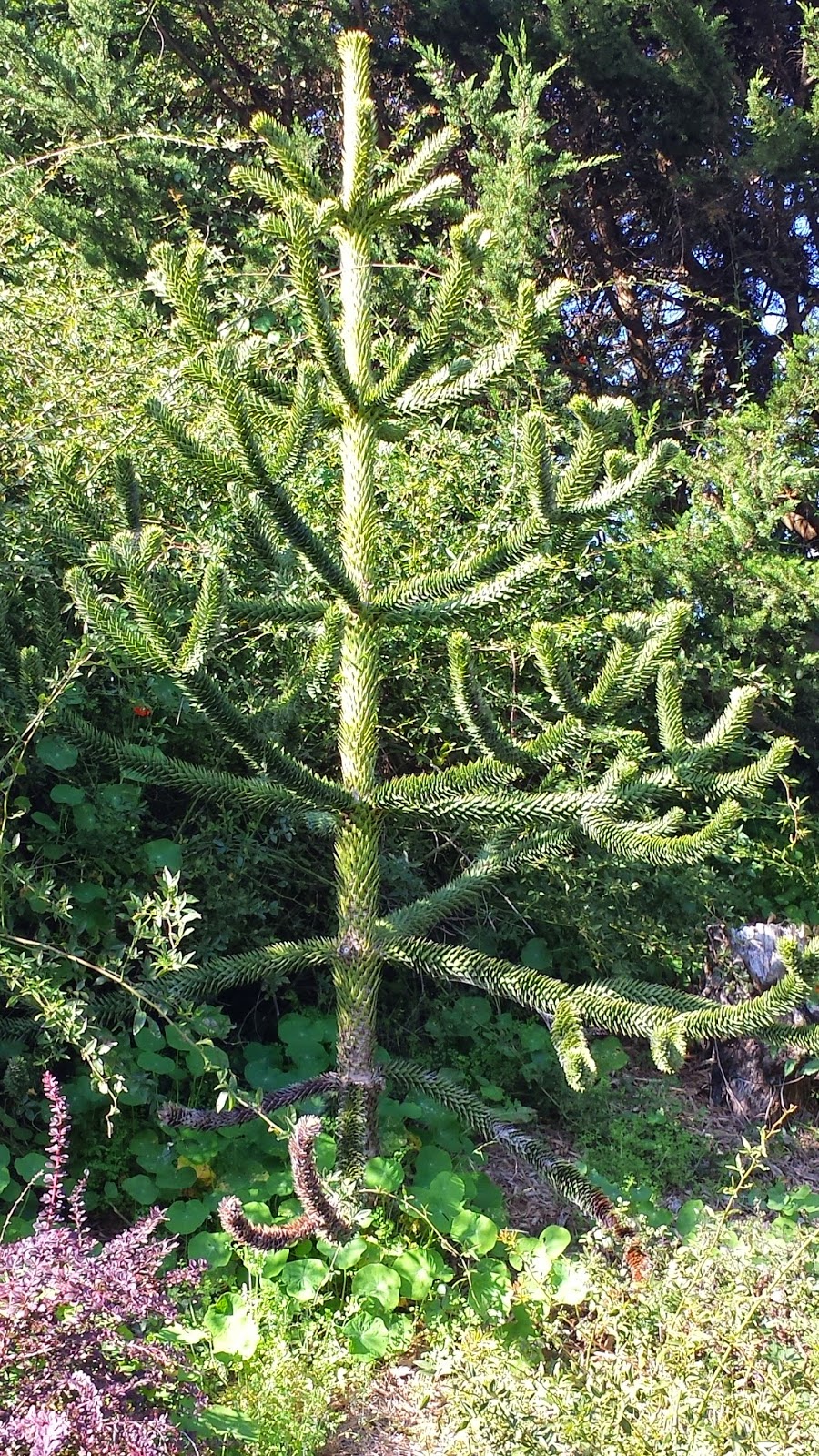 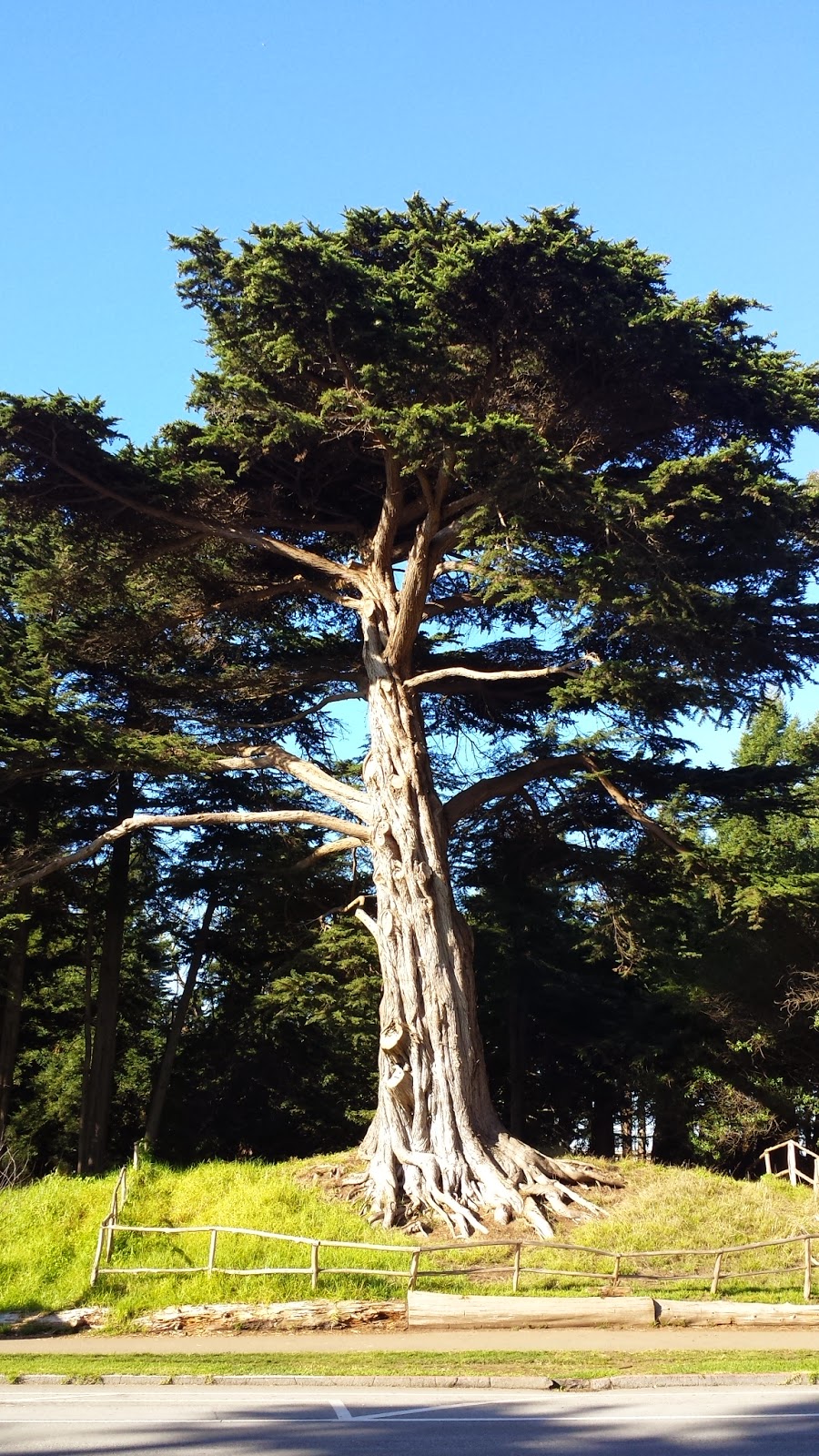 Even the boys had fun just walking through the park and playing at whatever they came across along the way. 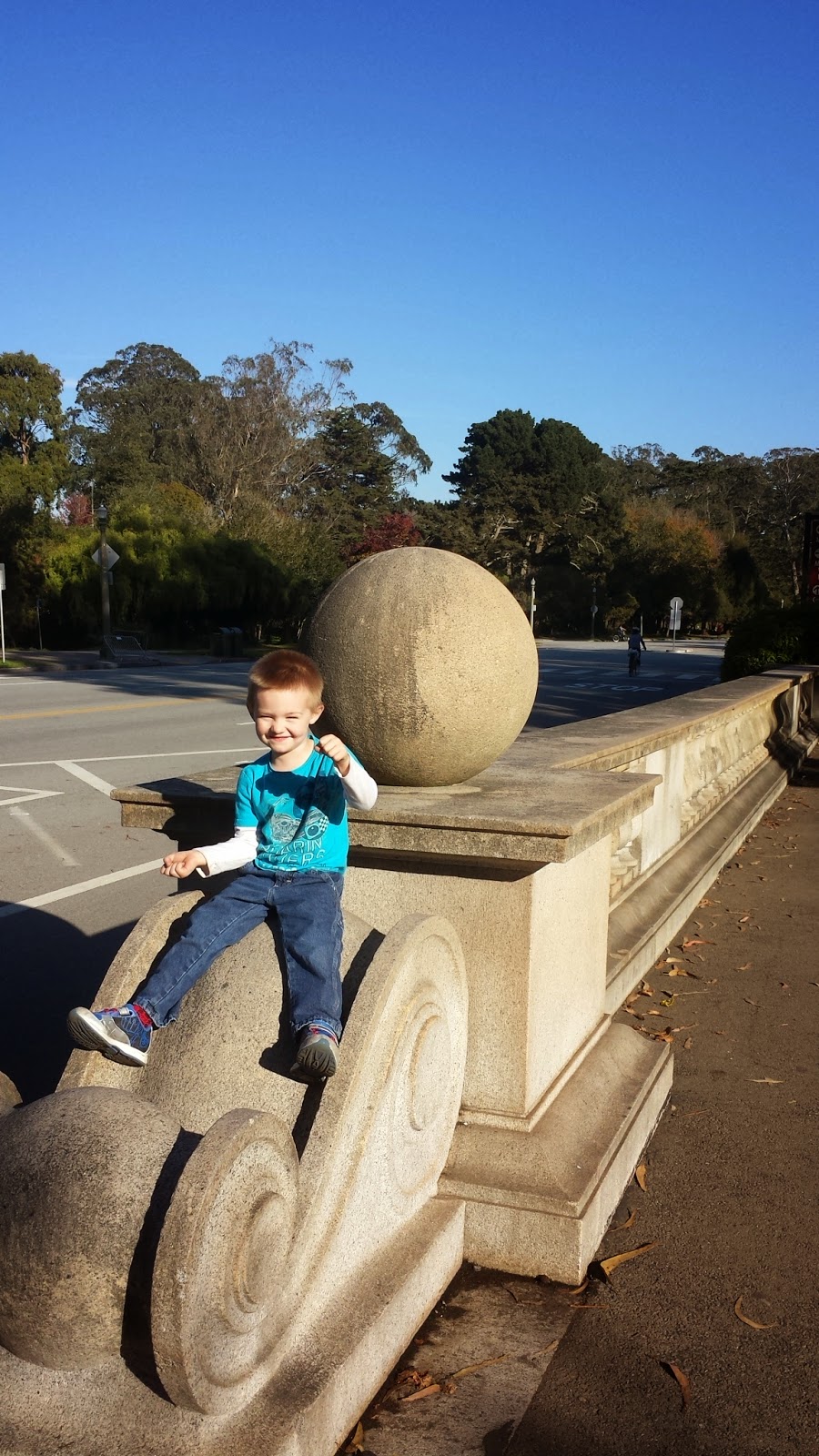 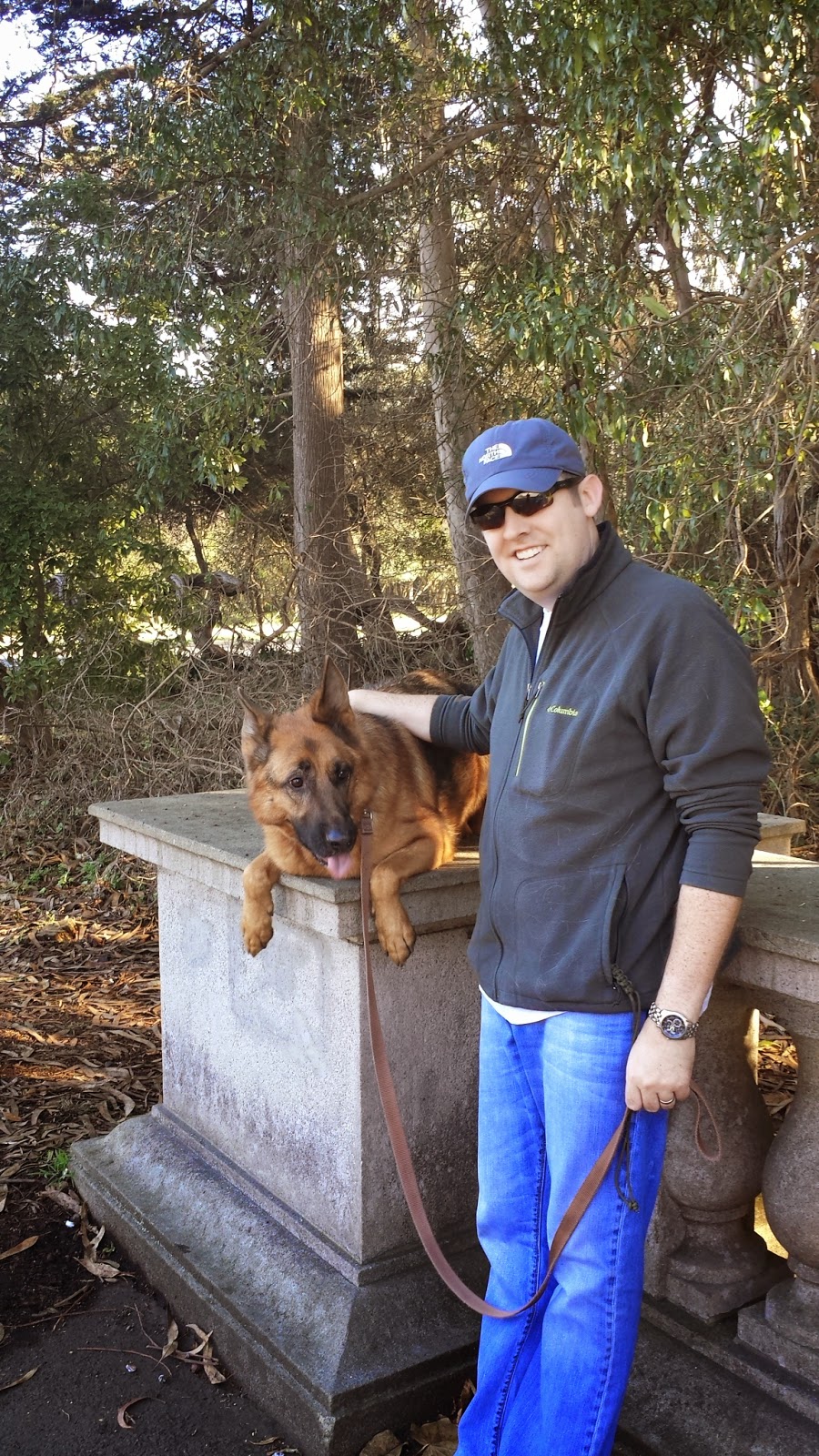 Obviously, that is a race car he is driving. When we got back home Adam and I started working on Thanksgiving dinner. While he started on some mac and cheese especially for Landon, I made an appetizer, homemade mozzarella sticks. They tasted pretty good, but didn't turn out exactly like I was hoping. 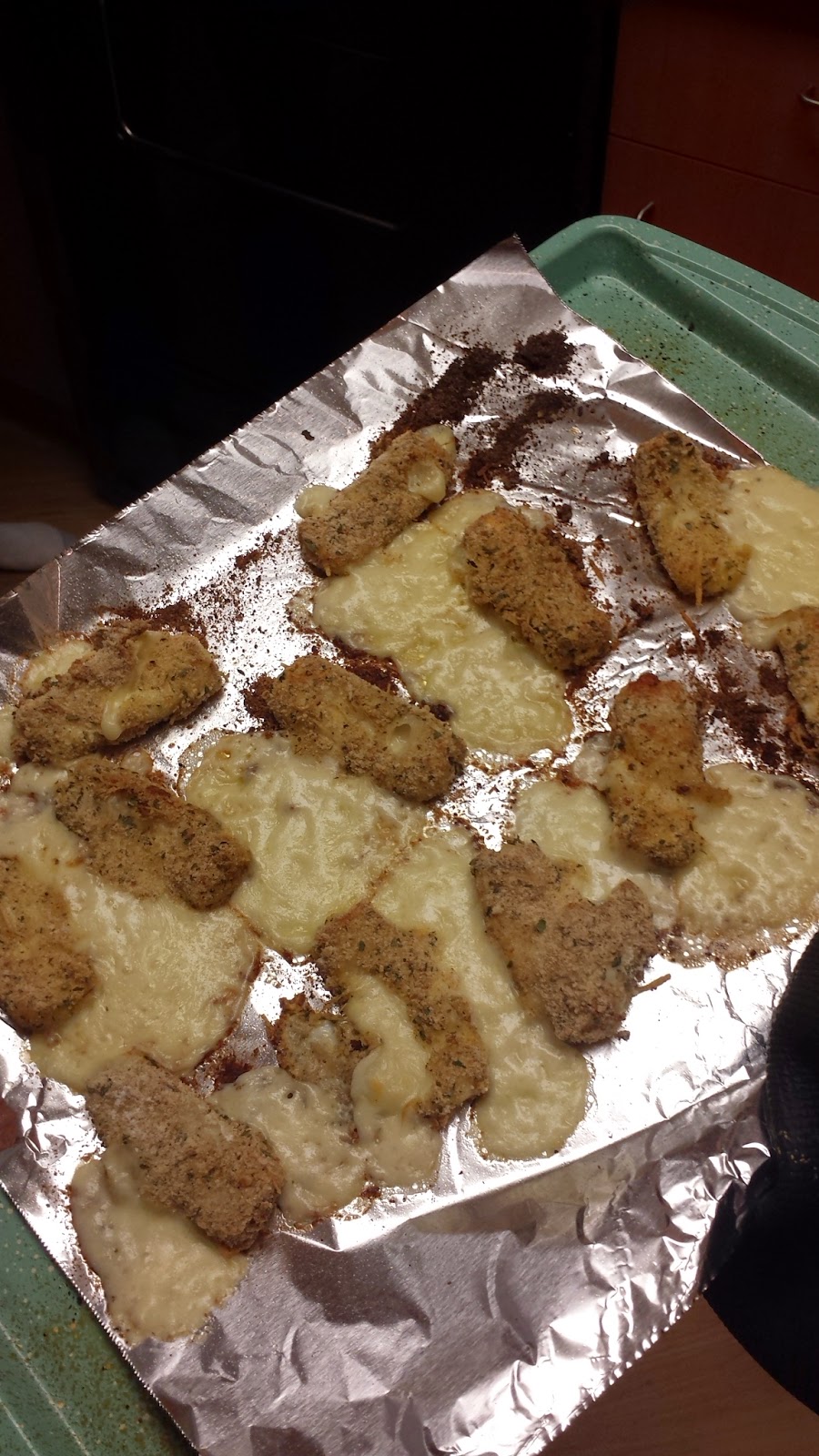 With only three people to feed, it wasn't the biggest spread. We bought a turkey breast instead of an entire turkey which still was more than enough for the three of us. We had macaroni and cheese, mashed potatoes, stuffing, and rolls. I even managed to make some chocolate chip cookies for dessert (the break and bake kind). 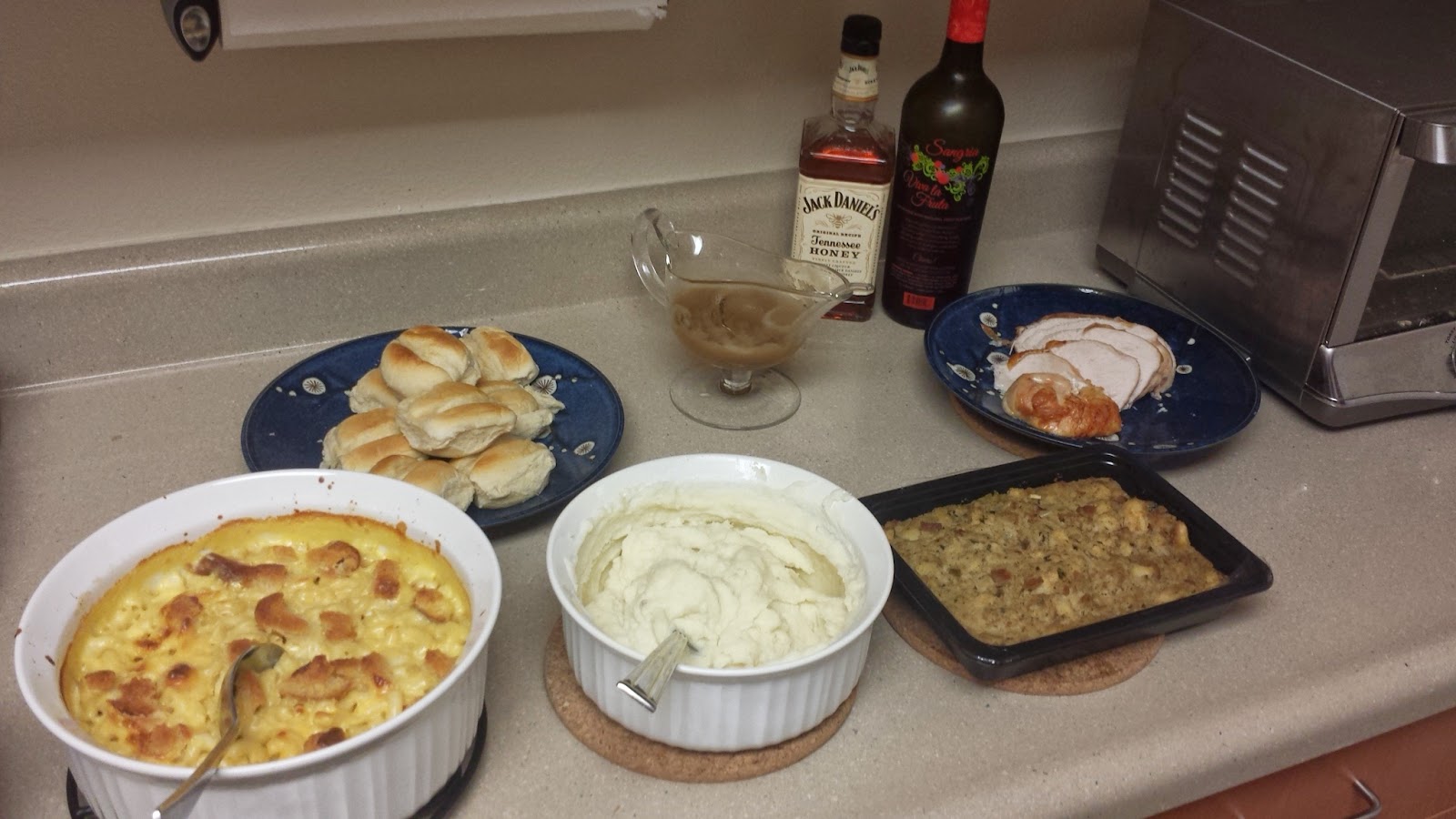 I didn't spend a ton of time in the kitchen or slave over making the most gourmet food. I have one very picky eater and a three year old who can be picky so it just isn't worth it. Since we haven't purchased a kitchen table, we sat around the coffee table, Landon sang his prayers and we ate. We talked to Landon about Thanksgiving and asked him what he was thankful for. His food, of course, was his first answer. After the second round of prayers, I asked Landon to go one more time so I could take video. This is a prayer song that he learned at his daycare and although he is acting a little silly this time, I want to remember these little stages forever.

We spent the evening, lounging around the house and enjoying having nothing to do or anywhere to go. That being said, Adam missed our family a lot. I missed seeing everyone, but I realize that following our dreams has consequences and I seem to be able to deal with that better at times. Maybe holidays are going to hit him more or maybe he is just now becoming homesick. I know his Grandmother is the biggest reason for that, especially since she is one person we know won't be coming to visit us here. For me, I did miss being a part of Thanksgiving with my extended family, but in a way not having everyone else around made me cherish these two guys that I did have even more. One thing I've learned is that leaving behind everyone you know makes you appreciate them more, but it really strengthens the bond you have with the family you're left with. I never would have thought Adam and I would be able to grow closer, but new experiences such as this bring us closer and closer. Next year, if we can manage to go home I would love to, but this year I am most grateful for the ability to really enjoy my little family. To appreciate them in a way I've never known before and to grow closer with each passing day. Happy Thanksgiving! 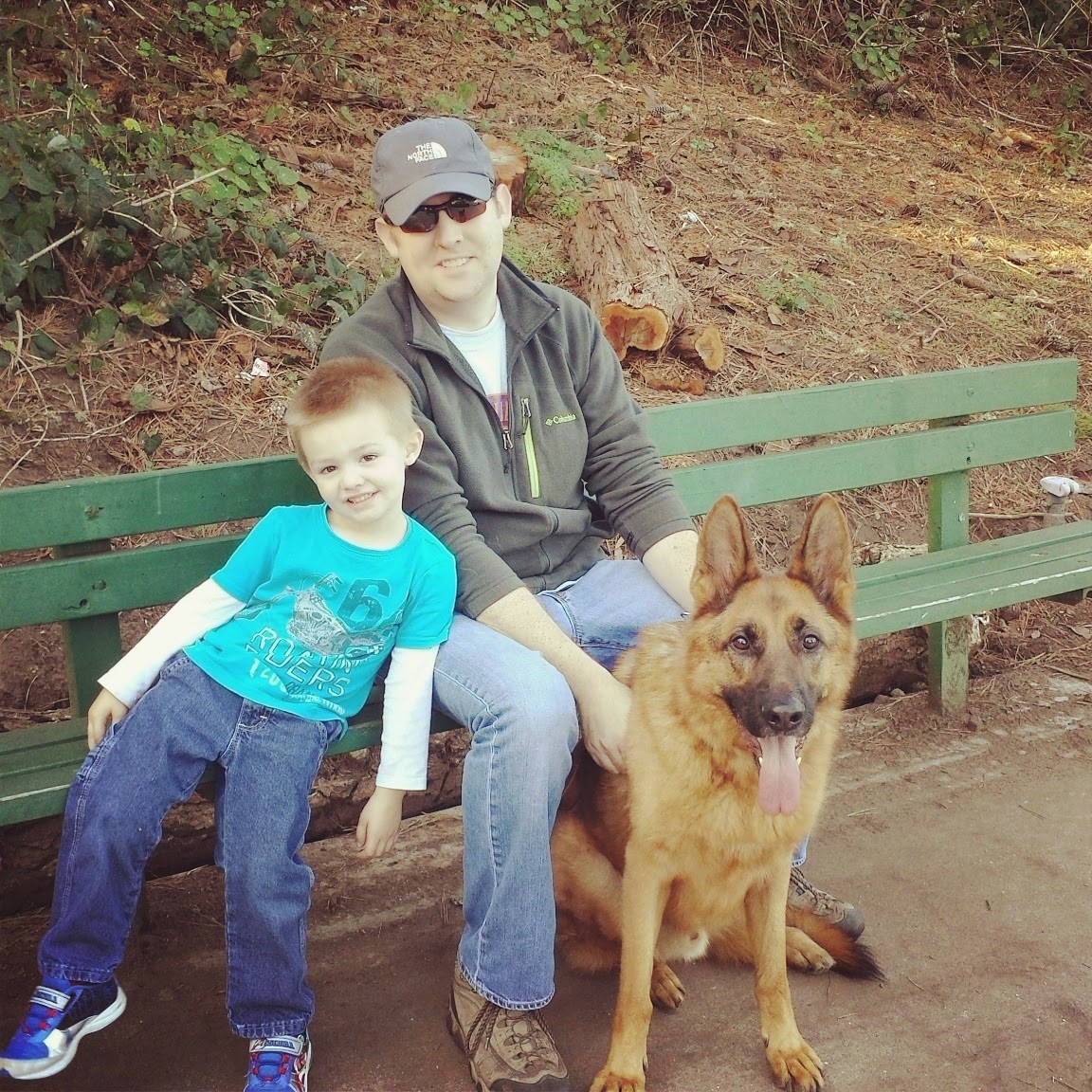