I was waiting to post about Halloween until Adam had done a photoshoot with Landon all dressed up, but someone had to ruin my plans by getting shingles and now the photoshoot has been postponed until further notice. So, instead of posting about Halloween a month from now when even the grandparents have moved on, I figured I'd just go ahead and fill this post with only subpar phone pictures. I apologize in advance. Costume photoshoots are a tradition in our house and once the shingles decide they are done wrecking our lives, we will continue our lives with our photoshoot included. The good news, Adam is going to be ok. He is currently majorly medicated, speaking about not feeling his legs, and rambling on about how he is sinking into the bed.

Moving on, this year's Halloween was a high and a low for us. Starting with the low, I thought I would have one more year of being able to dress Landon as I wanted to. This last year, he has become increasingly more interested in his clothes and more picky with what he wants to wear and what he doesn't. Despite losing the battle in daily life, I mistakenly decided months ago ( like 10 to be exact) that he would be a cowboy and we would make a saddle for Kaiser to be his horse. Well, Landon just wasn't having it. I've offically lost my cute little boy to dress up. He didn't want to be a cowboy or anything else cute and adorable that I could think of making for him. No, he wanted to be a superhero. Naturally. Another battle lost, I hung my head in defeat and headed to Halloween Express with 8 million other children where we settled on Batman. And I must admit, as disappointed as I was, he is still pretty cute, Of course, we had to get home and try it on right away. 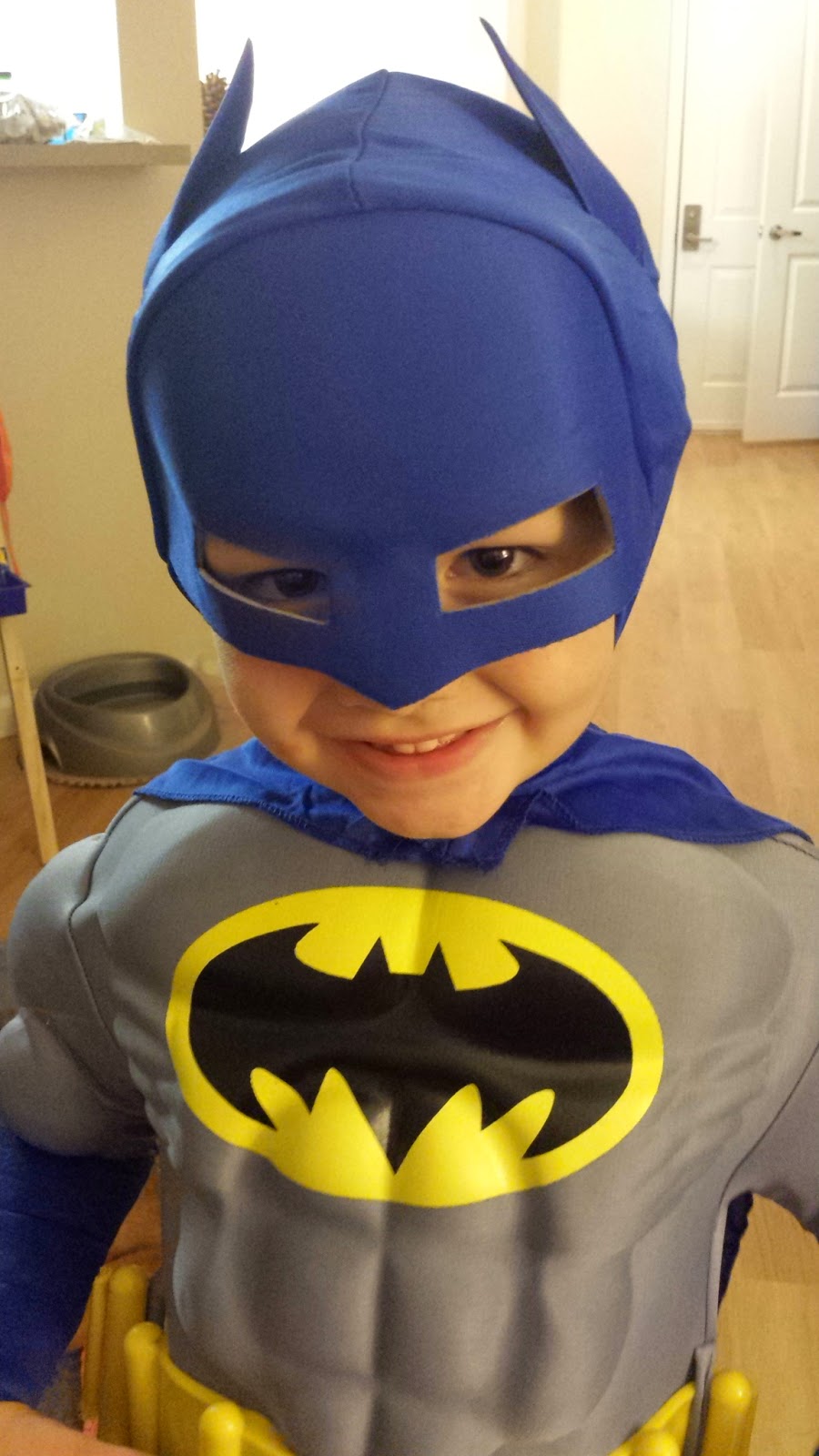 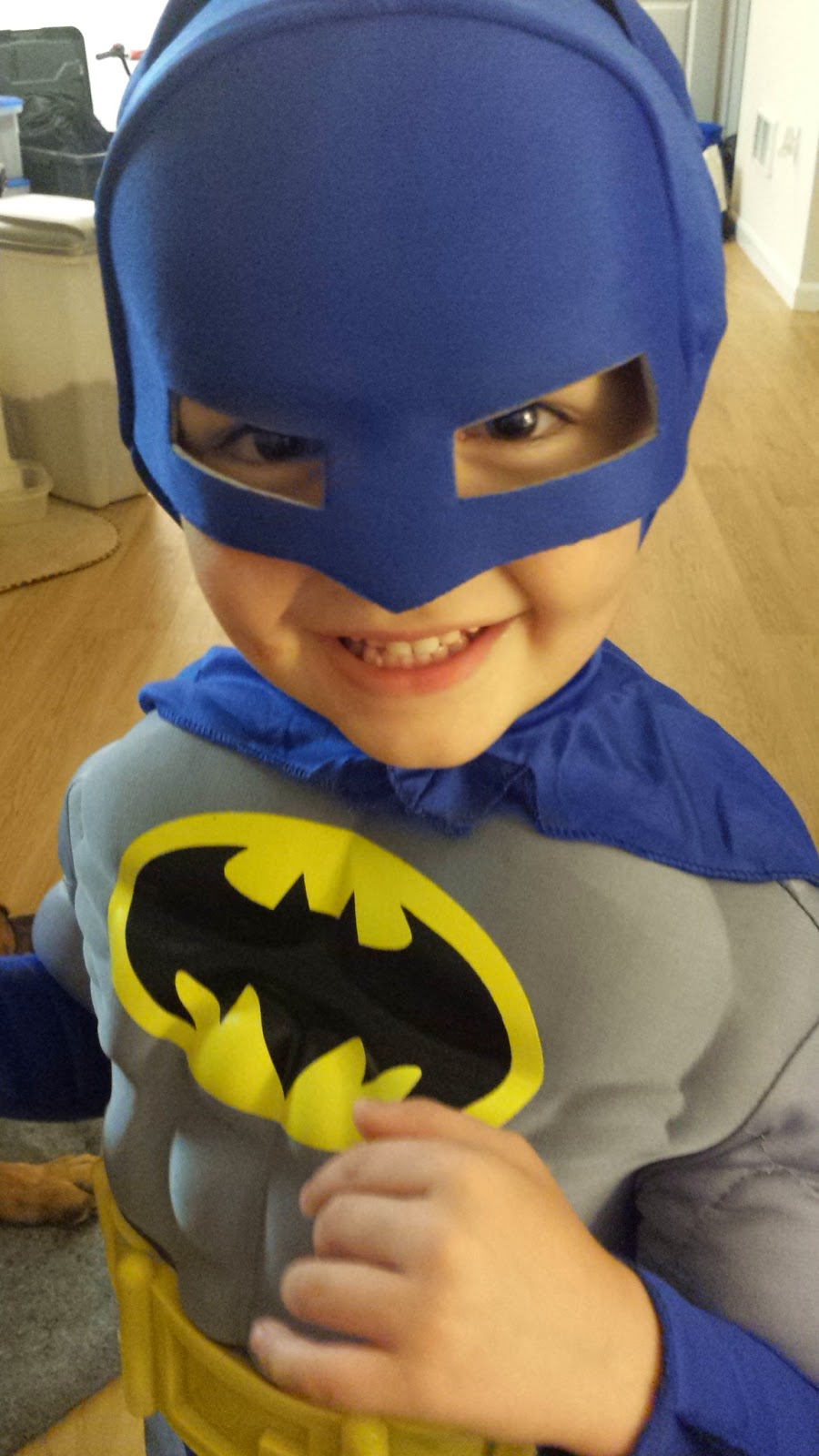 On a high note though, this was the first year Landon really got into it and was able to go trick or treating. Last year, it was raining in Nashville and my Mom and I tried to take him to the mall which was a total disaster. Being in an apartment complex this year, we knew we couldn't trick or treat at our place and one of my co-worker suggested a few great neighborhoods for kids so we decided to give it a shot.

In his offical debut, here's a picture Landon insisted I take of him with his "best dog" right before we left. I wasn't about to tell him that Batman isn't usually so happy. 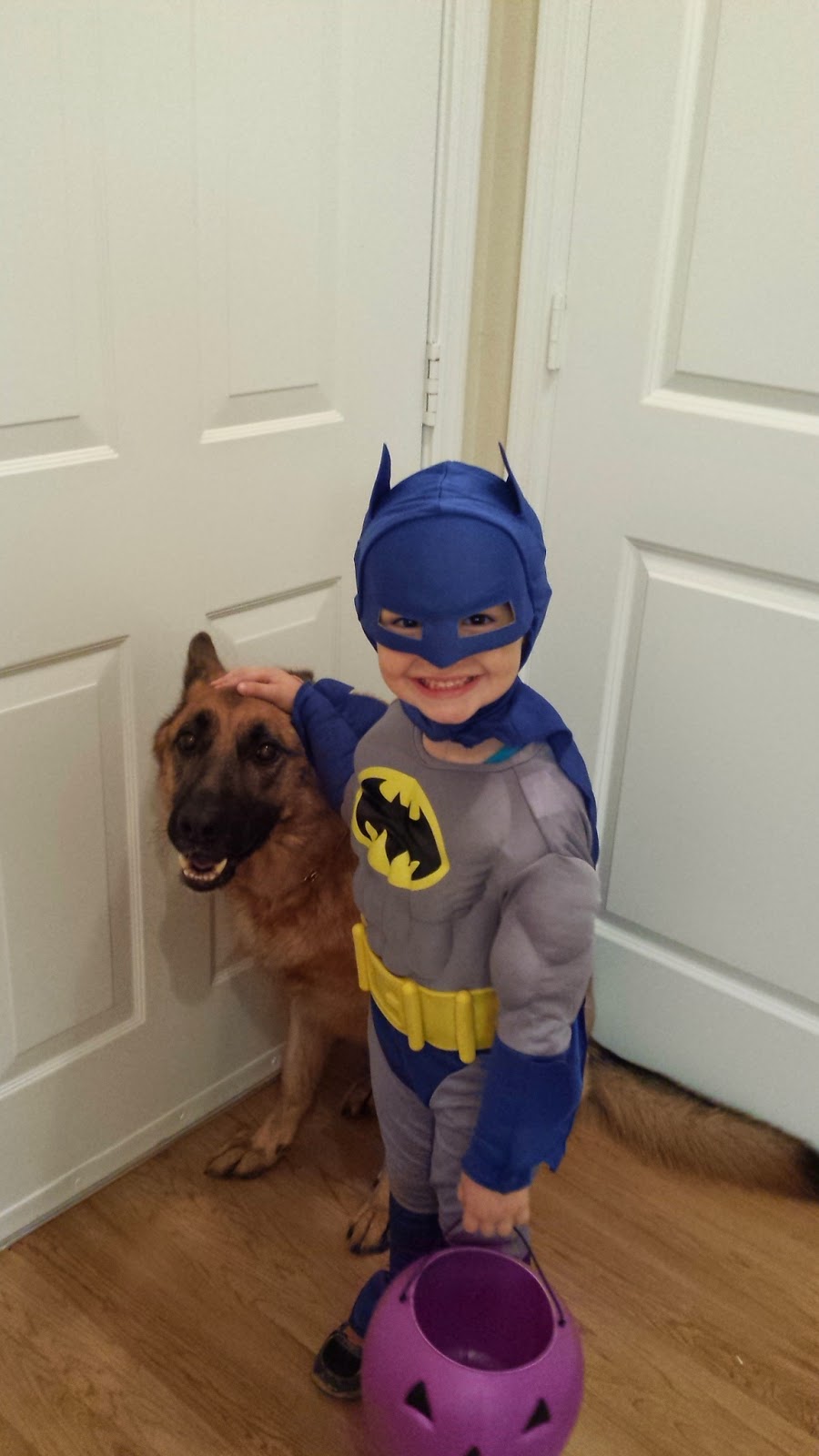 On drive over we talked about ringing the bell and saying "trick or treat" then thanking them for the candy. It was a completely new concept, but he heard candy and was all about it. It was a little different though when he made his way up the first house. 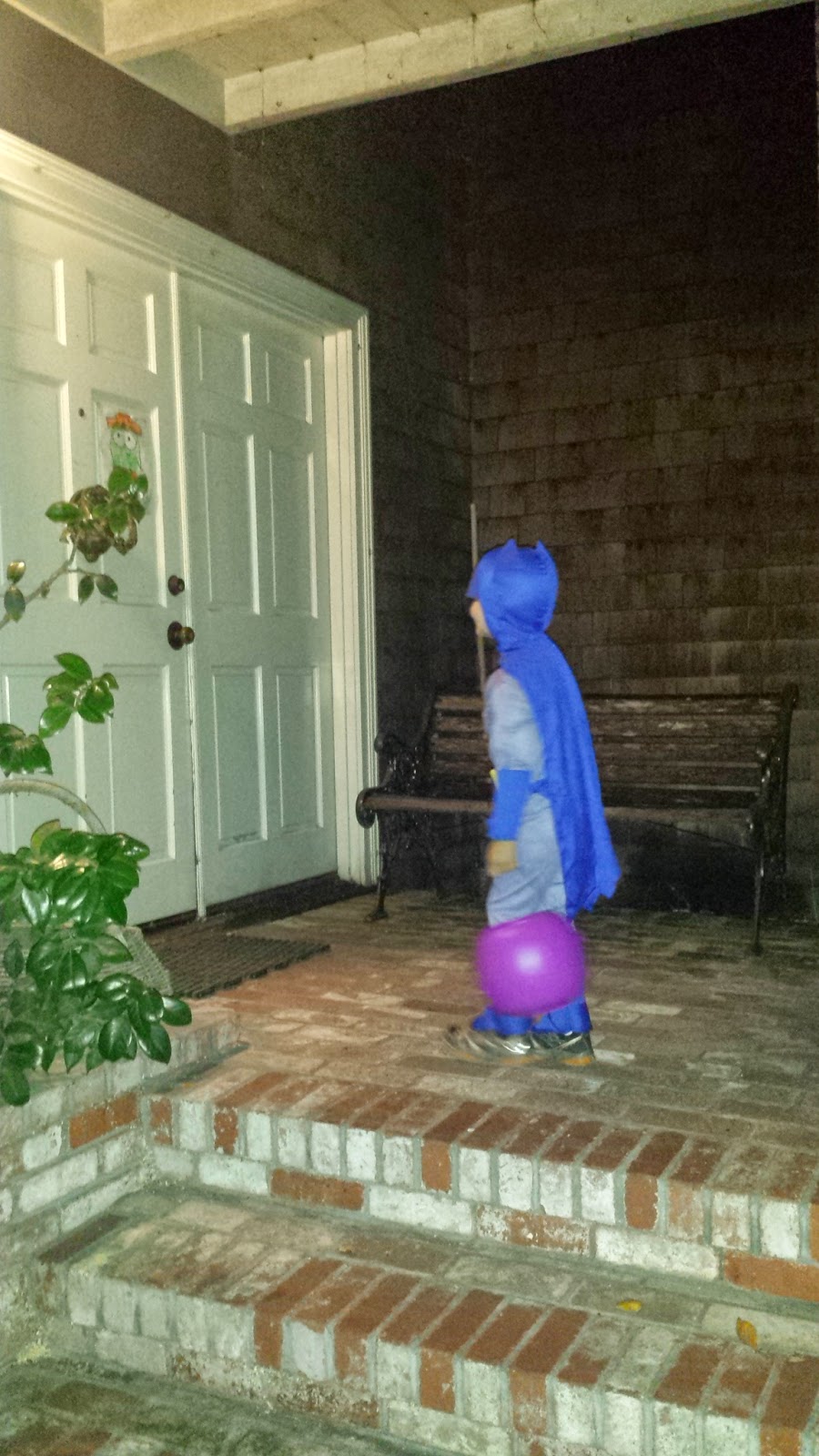 After more than a little convincing, he tapped on the door and just about the time we were about to leave a women came with a huge basket full of goodies. She bent down to let Landon choose for himself and while we were trying to tell him to only take one she proceeded to give him "one for himself, one for his Mom, one for his Dad, one for his babysitter, and one for his teacher." He looked down at all his goodies and it was ON! No more fear for him. He spent the next hour running from house to house in disbelief that it was really that easy to get candy. 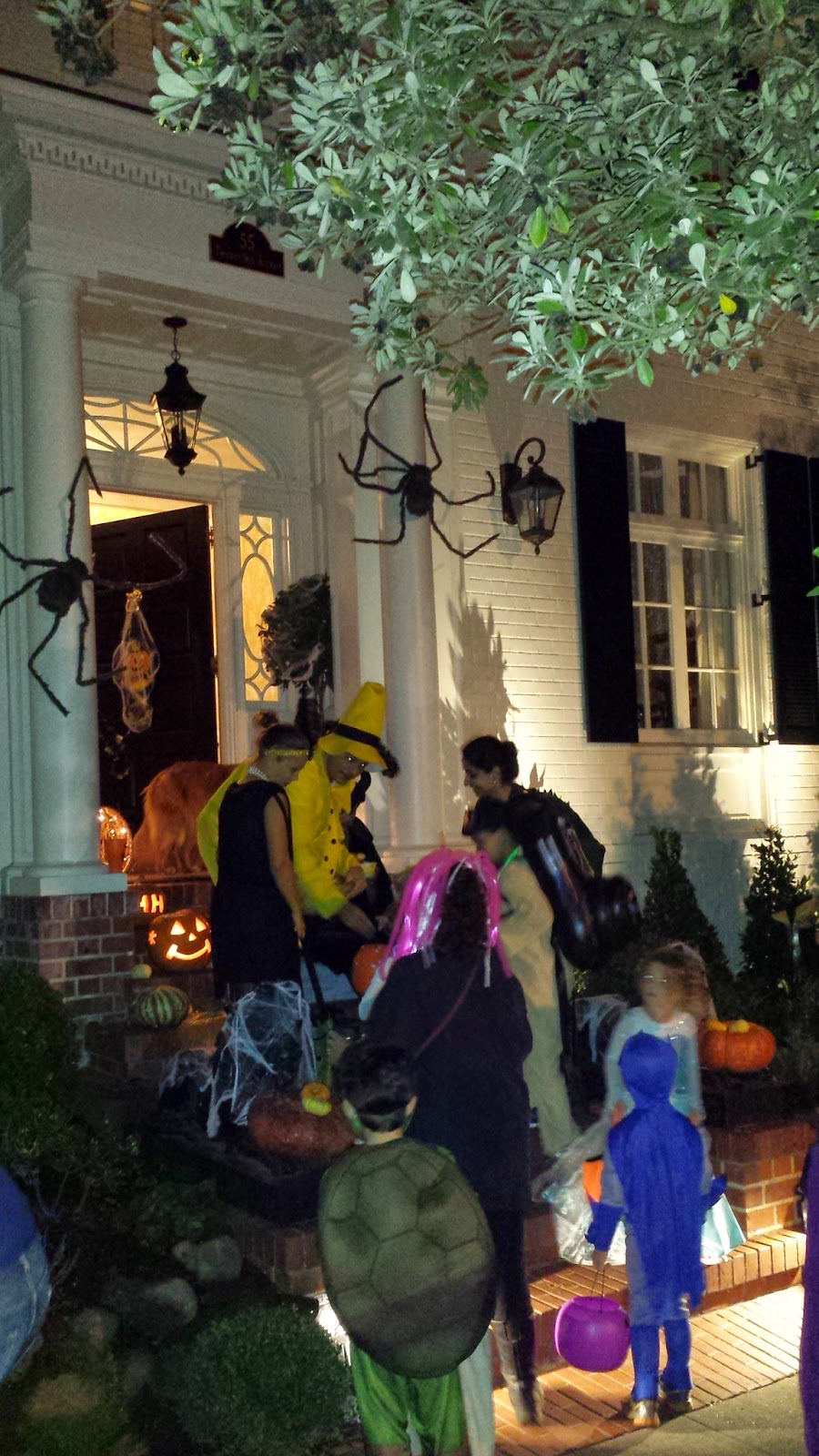 The neighborhood we chose (Sea Cliff) turned out to be a great place. Located in San Francisco it didn't feel smack in the middle of the city. There was little to no traffic and large sidewalks for all the kids to run about on. The homes were huge and beautiful (as we snuck peaks inside), but it was very kid friendly with tons of homes handing out candy, decorated, and many people celebrating a sort of Halloween spirit. 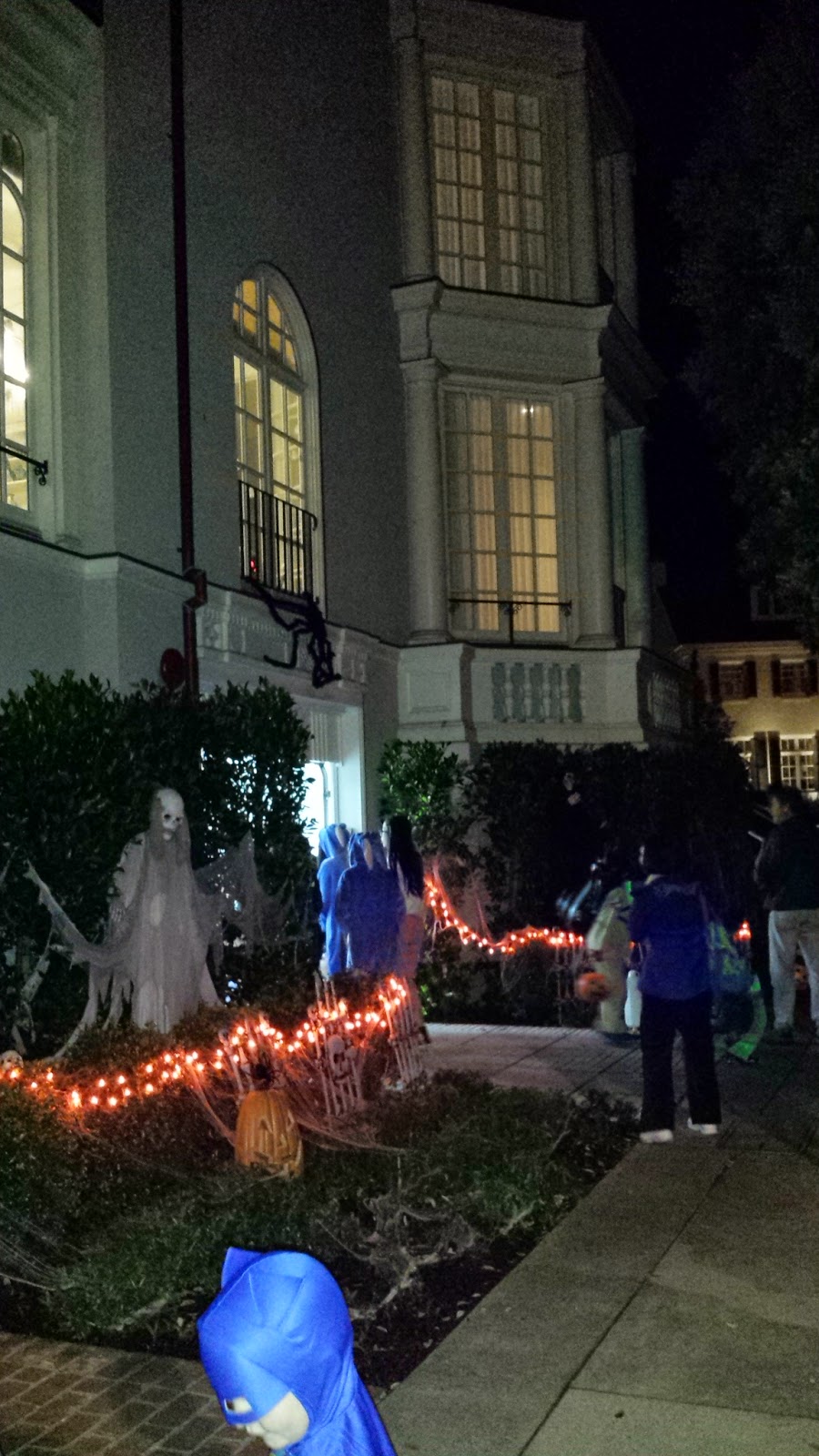 The area is so well known for trick or treating that even the food trucks were getting in on the crowds. 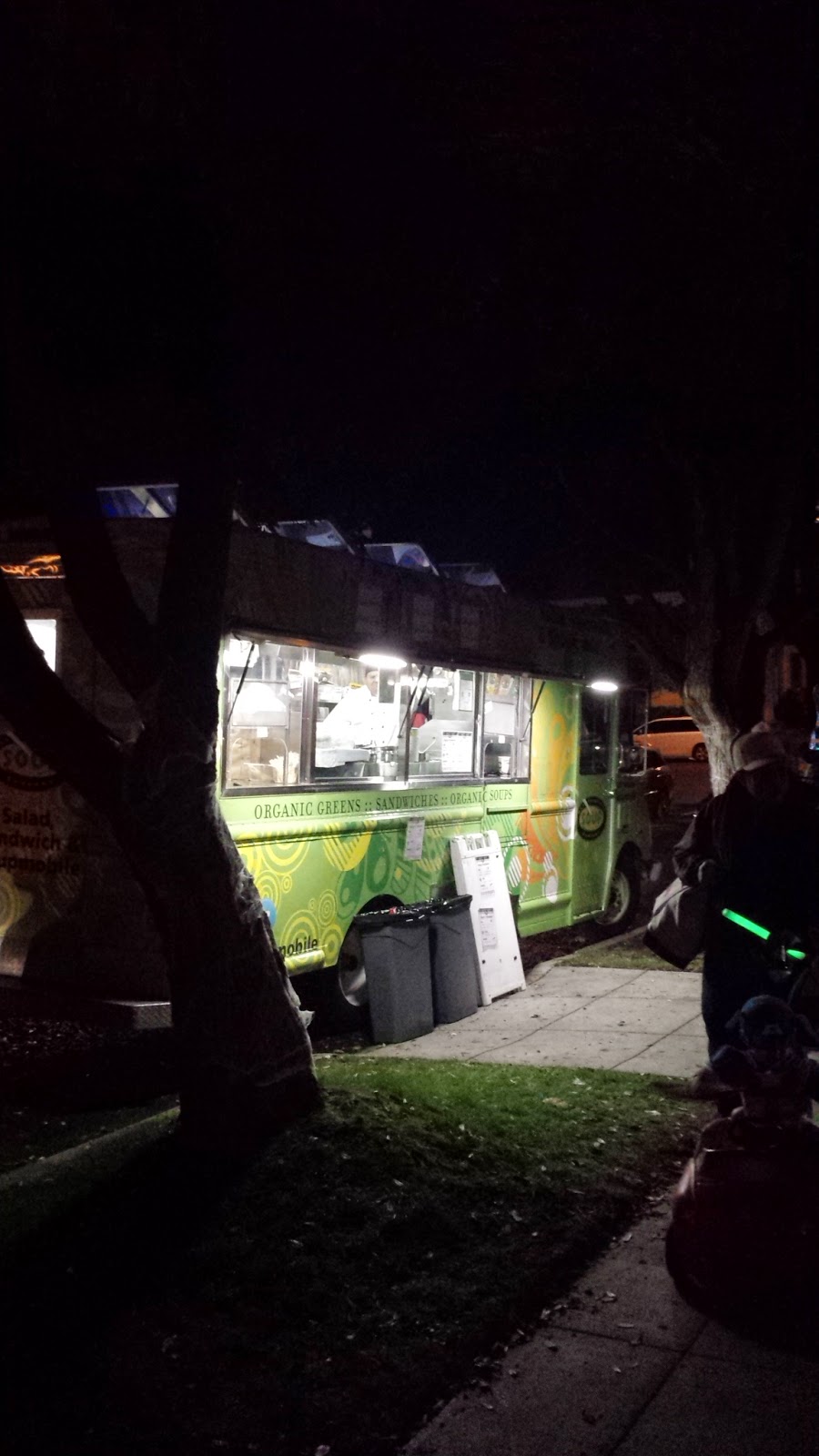 Despite the massive size homes they were still all packed together one on top of the other, which actually worked to our advantage as we were able to visit a lot of places without having to go very far. Even the small courtyards and spaces between the homes were decorated with pumpkin lights which nicely lit our path. It was perfect for young kids too as there wasn't anything exceedingly scary. 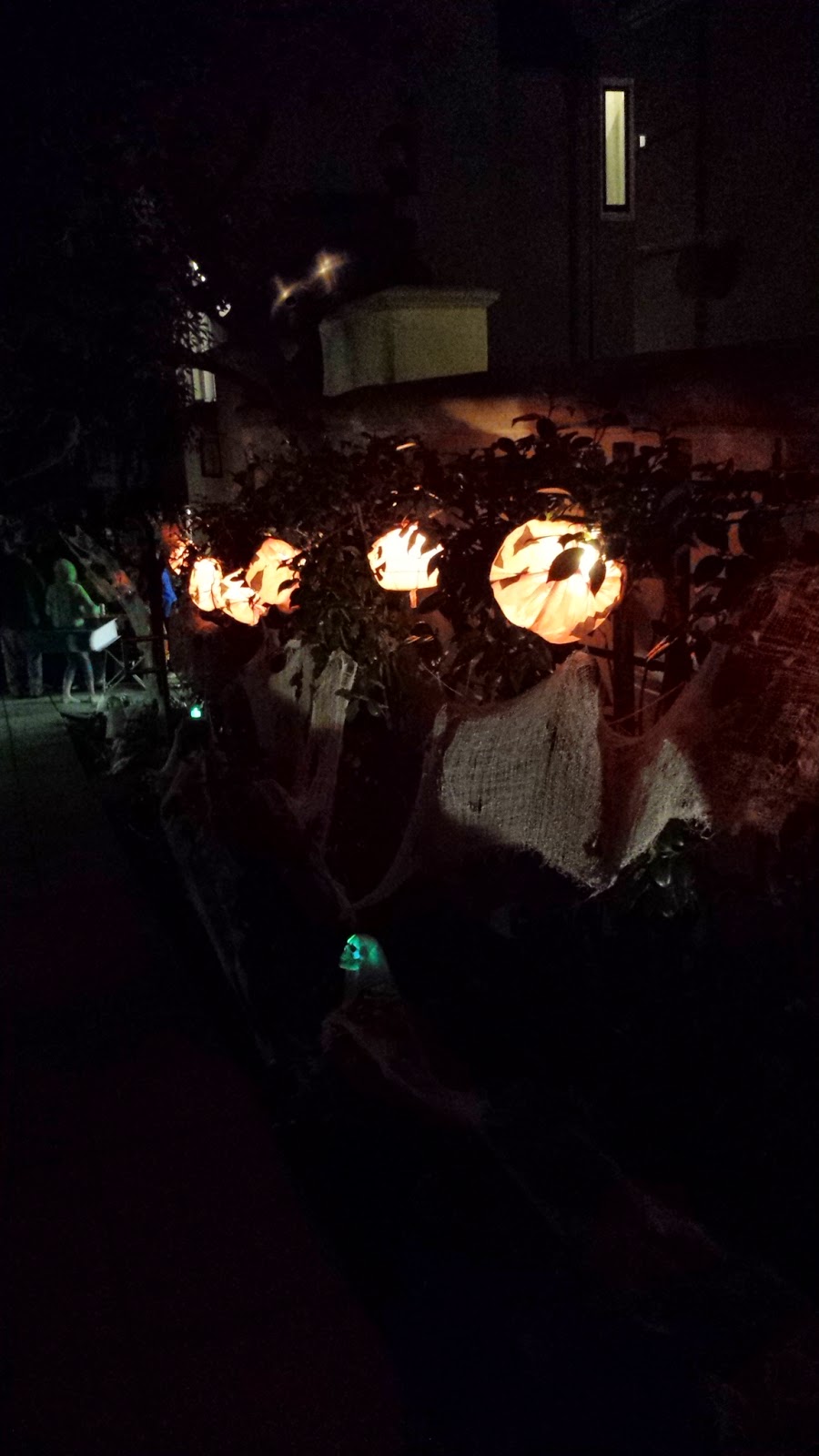 We spent about two hours running from house to house and collecting goodies. And although the candy was his most favorite part, he did enjoy seeing the other kids all dressed up and enjoying themselves too. He is somewhat shy and not pushy at all so at times when we got to the homes with long lines, he would often get pushed to the back as he gawked at the other children instead of paying attention to the moving line. He didn't care. 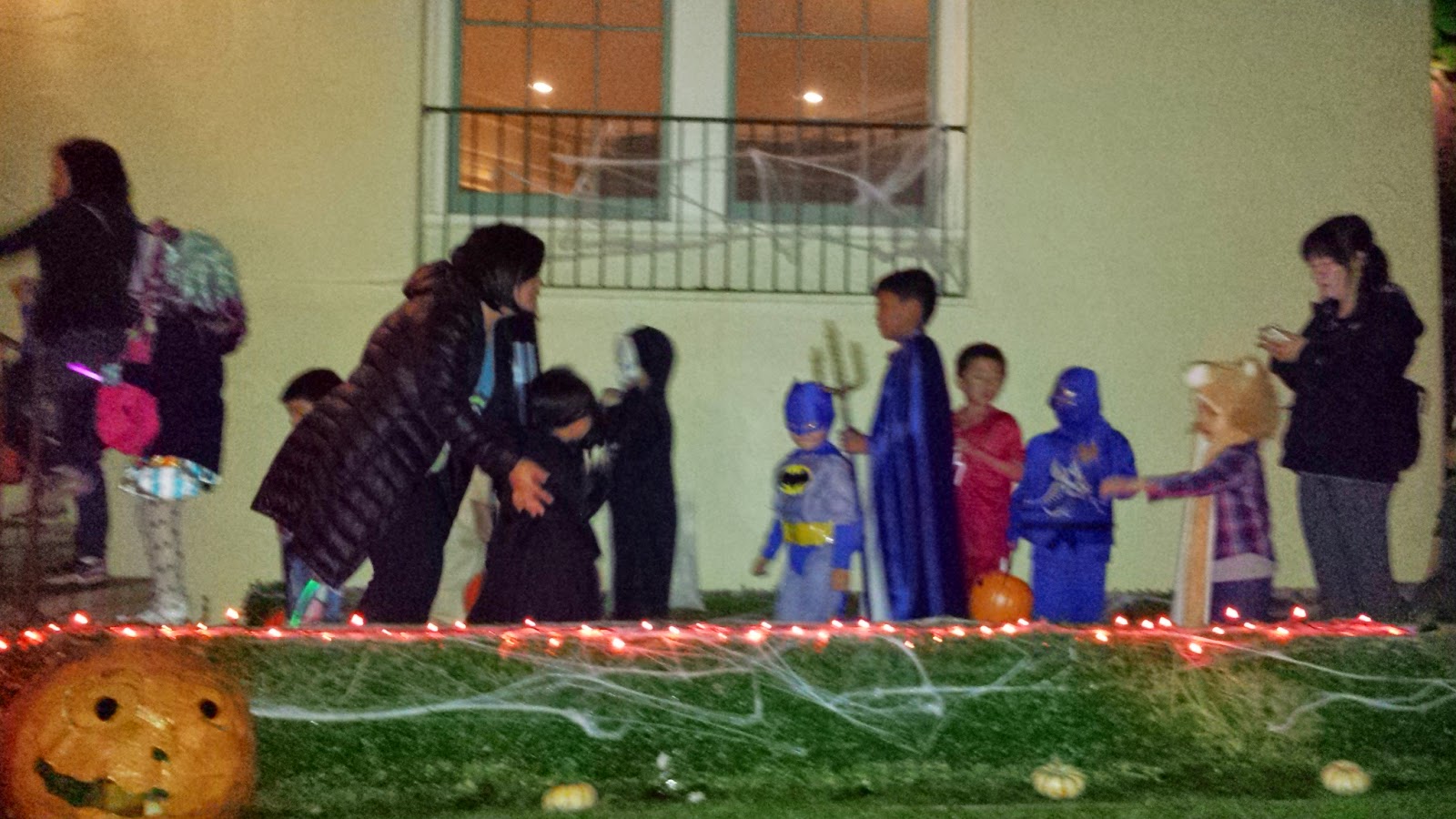 At one point, he got stuck in a group of taller kids, couldn't get out and got a little freaked out. Of course, we quickly rescued him and made it all better by allowing him to take a break and enjoy one piece of candy. Sweaty little thing was over it quickly and ready for more. 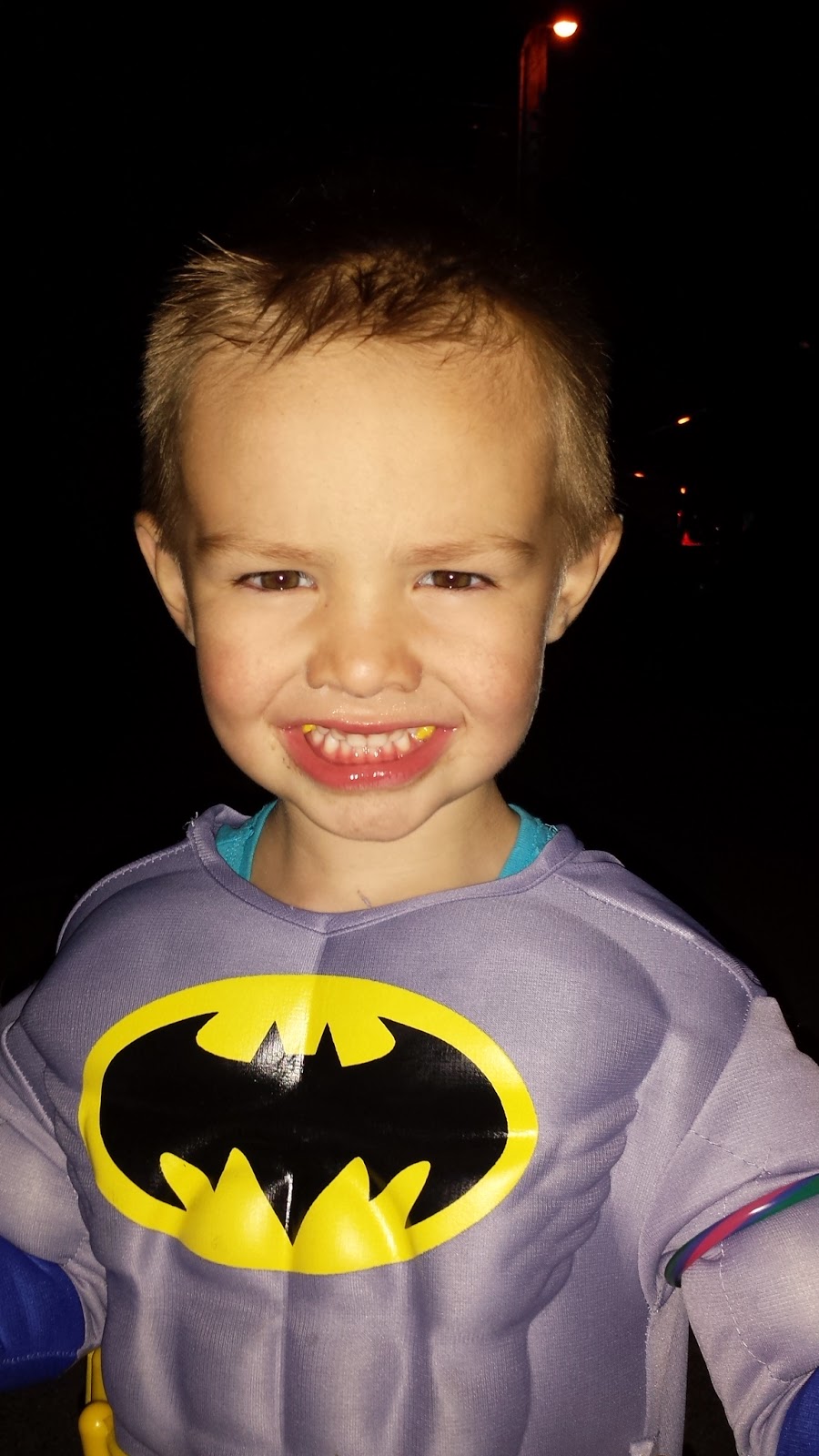 Even without the added excitement of a kid, it was fun just to walk around and see the homes decorated. If we had the money, I would go all out for Halloween. It's only one day of the year, but it can be so much fun. 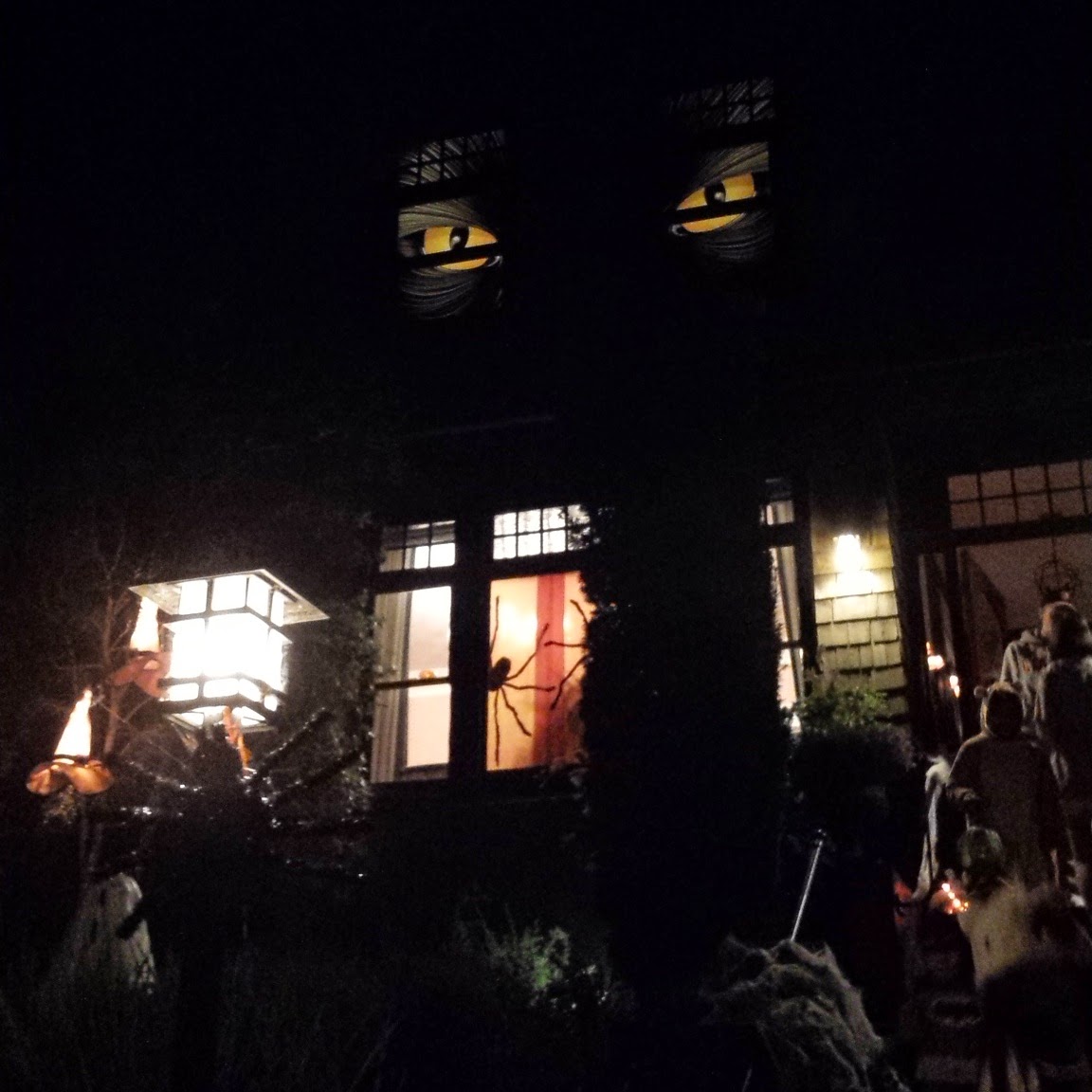 Around 8pm we headed back to the car and Landon did what all kids do after a fun night of trick or treating, he started taking inventory. 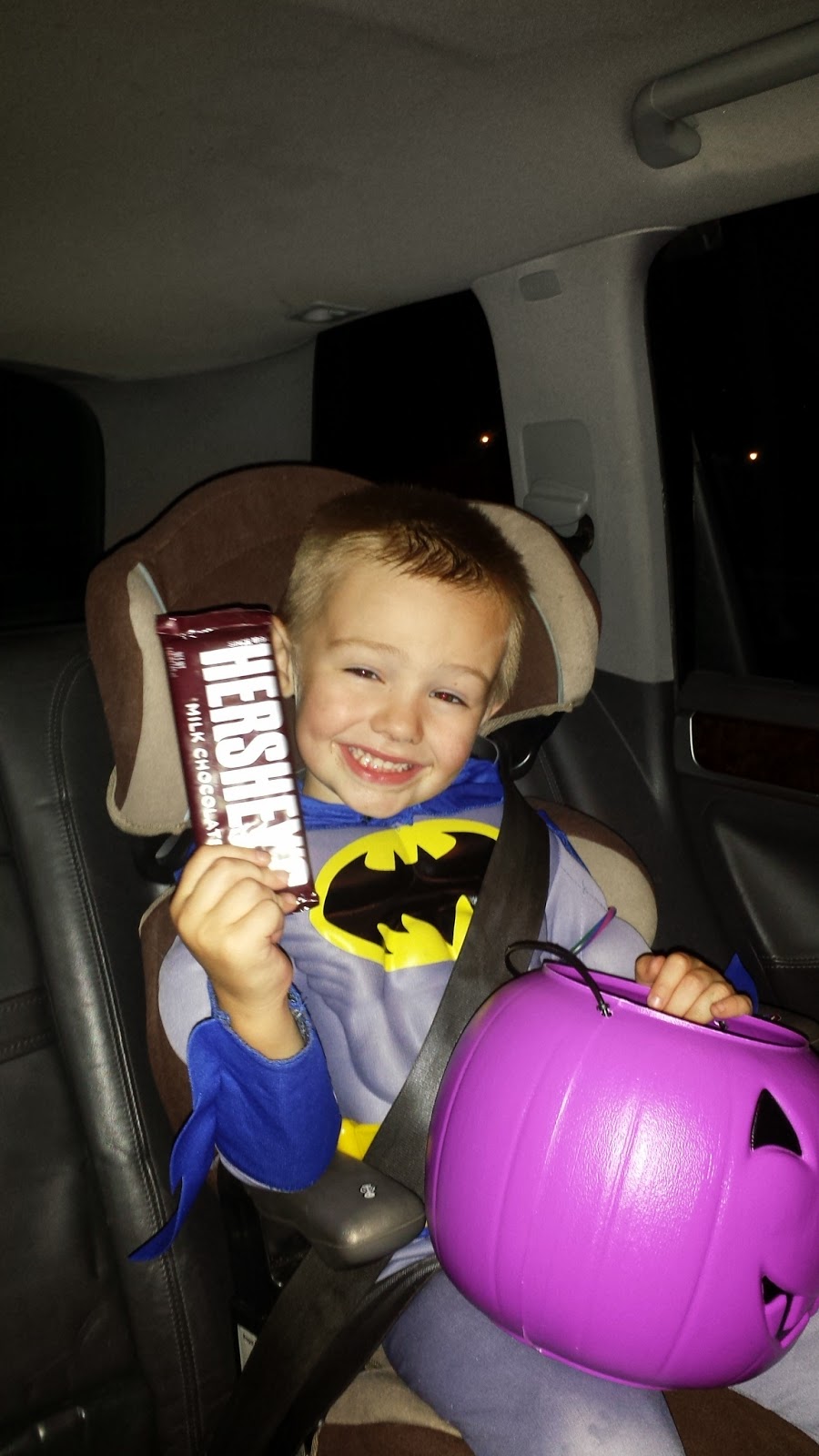 And the negotiations for candy began. Despite his full size score, he started it off with a blow pop. It took everything I had for the 80's child in me not to steal it from him. "Charm's Blow-pop, take 5, action!"  Ah...the memories! 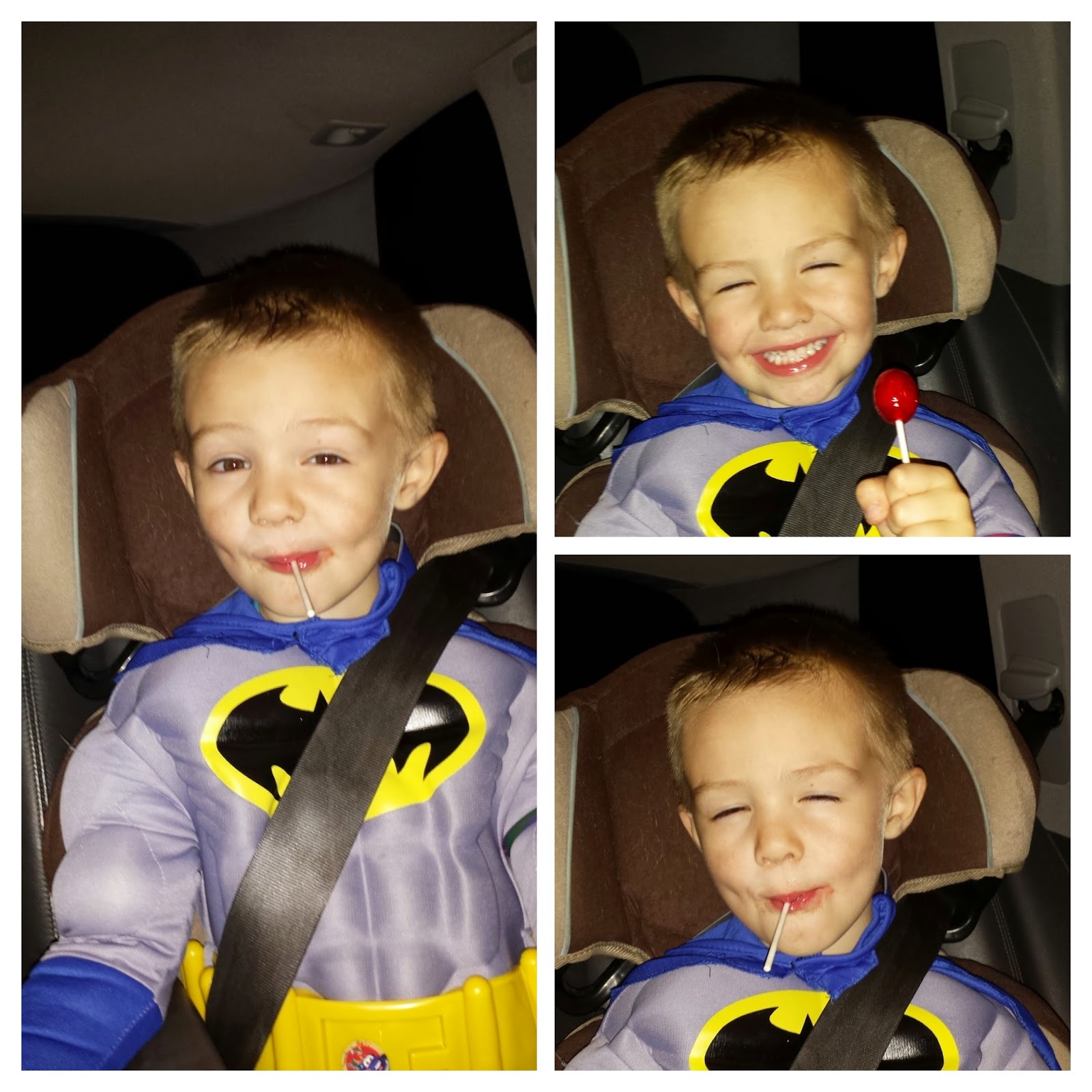 Famished from all the excitement, we headed to In and Out Burger with the rest of the city a quarter of the city to end the junk food night on a high note. 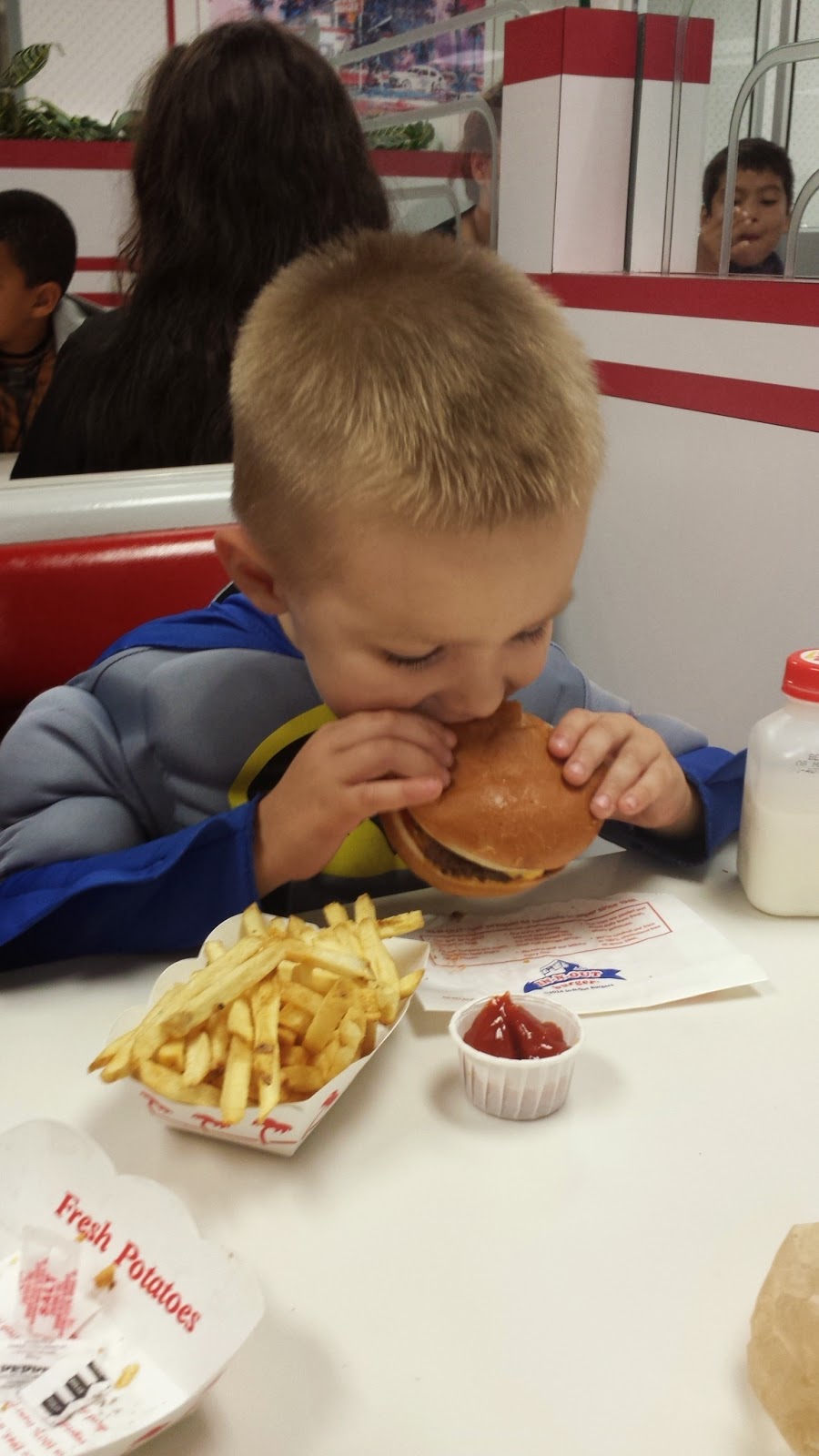 And we got home, I showed him the proper way to inventory his loot. 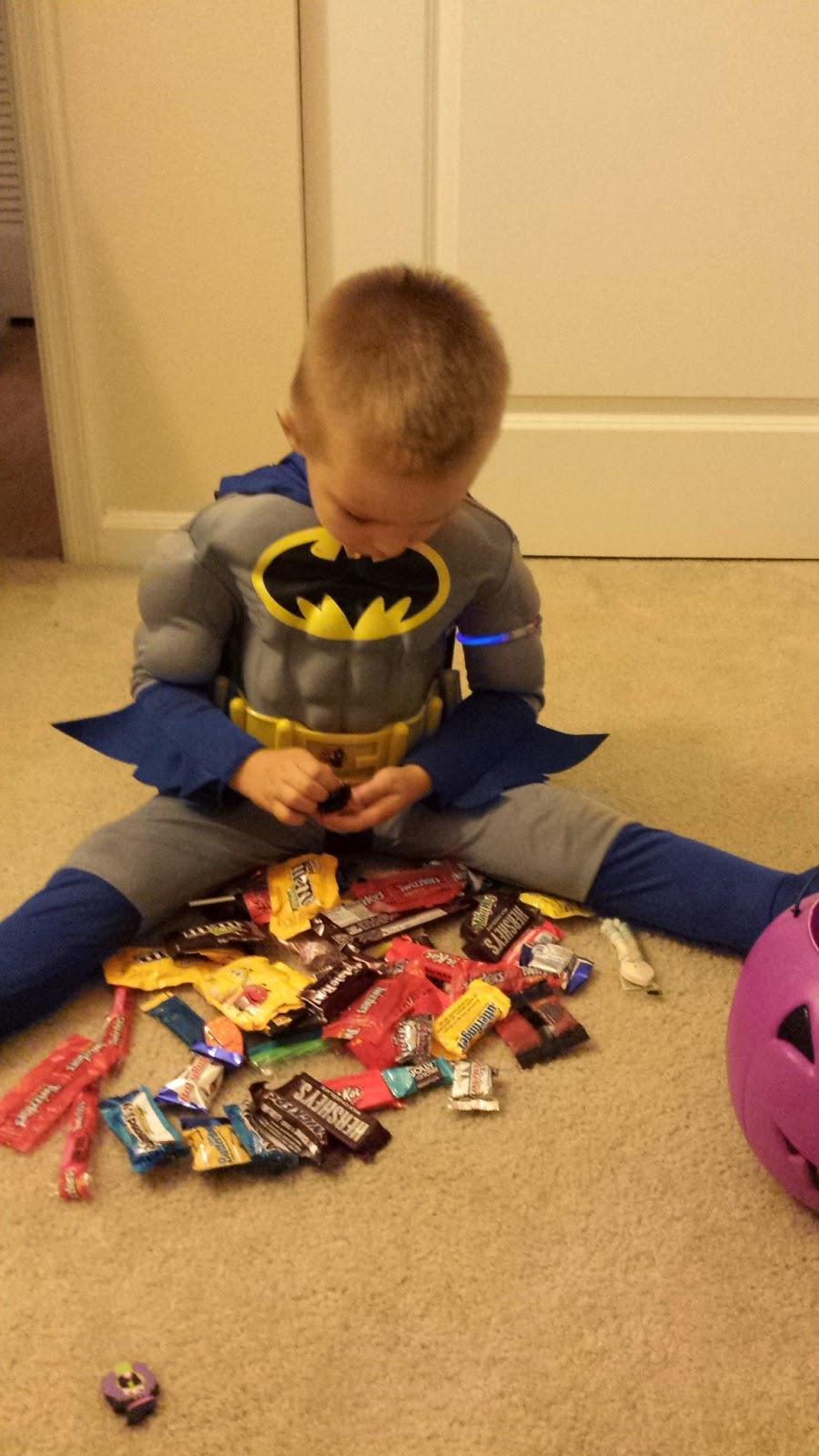 I have to admit, despite the costume loss, this was our best Halloween so far. In the past, we've always spent Halloween with at least one additional family member, usually more, and I really missed that, but that void was filled with the excitement and fun of seeing it all through a child's eyes again. Best part yet, we got to spend it as a family. Despite Adam already feeling crummy, this was only the second time he's been able to spend Halloween night with us instead of working. And please tell me I'm not the only parent who has used a container full of candy to their advantage. I can't tell you how many times I threatened his candy if he didn't listen over the weekend. It works like a charm everytime! I'm just not sure what I will do when he eventually runs out. Maybe I can work that into negoations for next year's costume...I'm thinking army man.