After Adam's horrible case of shingles, visitors, and a weekend of rest, it seemed like forever since we had explored a new place. We spent a few hours at Golden Gate Park on Thursday, but we've been itching to go somewhere beyond the city so Saturday we decided to make the short drive to Pinnacles National Park. I can't even begin to describe how much fun it is to have a never ending list of places to go near where we live. There were so many places we never got the chance to visit in and around Nashville, but it seems like for every one or two places we visit here, I add another five or six to our to-do list. With an active little boy, it makes for some exciting weekend adventures and this adventure seemed to be his favorite yet.


Saturday morning, we woke up and headed out at a pretty decent time for us on a Saturday, just after 10:15. We drove a little over two hours South East to the West Entrance of Pinnacles and arrived just before 1pm. 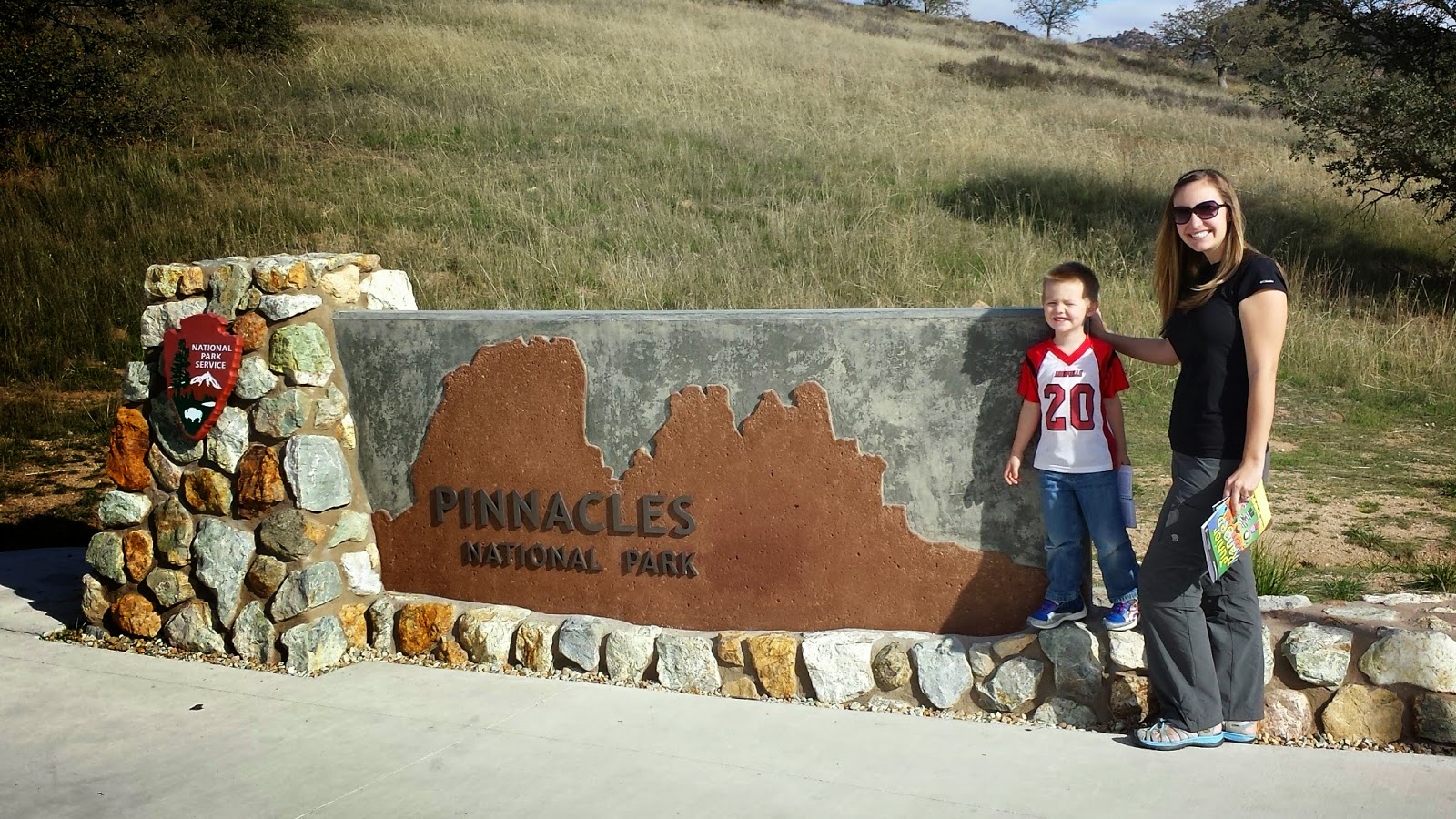 Our first stop was the visitor center so we could be sure to get Landon's passport book stamped. As I walked in and said hello to the park ranger I noticed this little sign hiding in the corner. 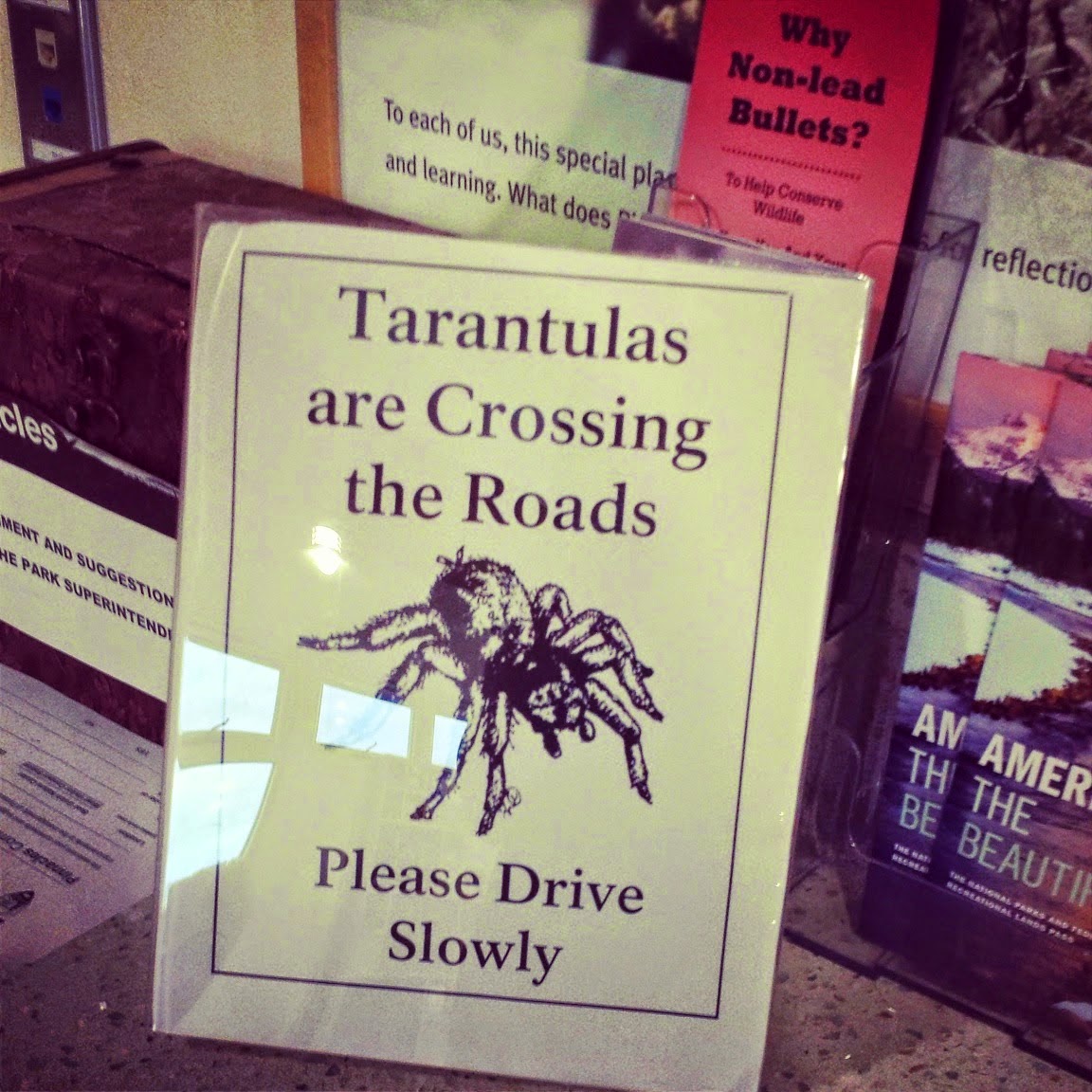 My initial thought was that it was a complete joke. Call me naive, but I didn't realize there were tarantulas in California. If I had, moving here might have taken a lot of convincing. So just about the time I realize that it probably isn't a joke, Adam walks in and I point to the sign as I start to freak out. He looks over at the ranger and ask how likely it is that we will encounter any tarantulas to which she replies, "You might see some on the trails. Their mating season is just about over". Their what? I was seriously ready to leave at this point, go home, call it a wash, and never return. We'd go ahead and stamp Landon's book of course, but that was it. As we walked by the car, I literally had goosebumps all over my body. If it was only me, I would have left, but I couldn't do it to my boys and my damn determination wouldn't let me. I never let myself be restrained by my fears which has allowed me do some pretty amazing albeit rather scary things. This may have been the top of my list. In the jungles of Belize, when were preparing to go zip lining, our guide pointed out the tarantula holes to us. Unaware then as well, I informed that if he pointed out an actual tarantula he would be carrying me out of the country. Thank god, we never saw any that trip, and to ruin the anticipation, we didn't see any on our hike at Pinnacles either. I did however see a number of holes along the way and thanks to a guide in Belize, I'm pretty sure I knew what they were.

So once we left the visitors center, we set some ground rules for the day. No joking about tarantulas, if I jump on your back at anytime please let me stay there, if I start to pass out you better catch me, because if I wake up and one is on my face you will be a 31 year old widower. After all parties agreed, we made our way to the Balconies Trail. The Balconies Trail is a fairly easy 2.4 mile loop which takes you through the Balconies Cave. This is the view from the trail head. 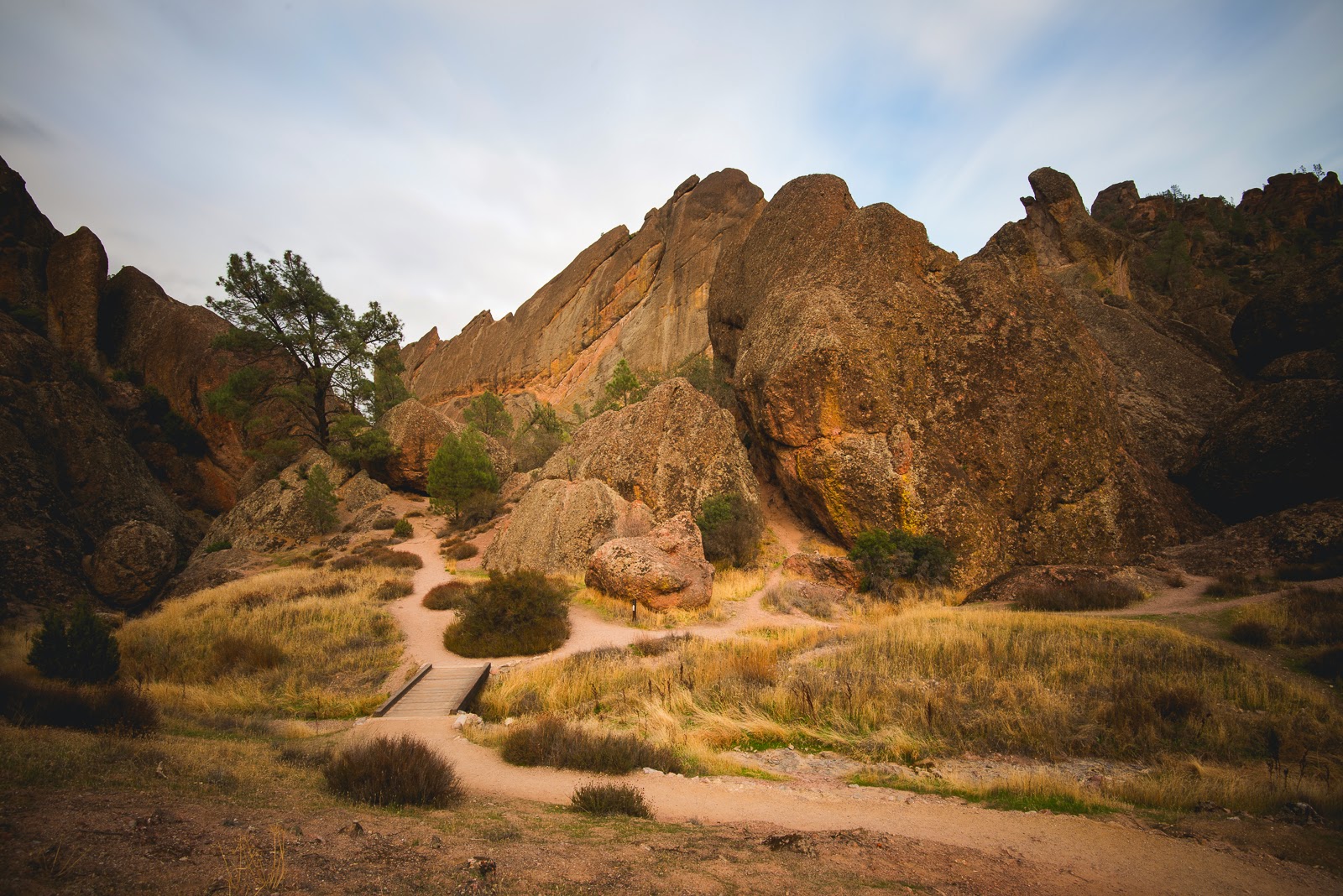 Created by an extinct volcano Pinnacles is aptly named from the lava rock formations that peak out of the ground. It's a favorite place of rock climbers, but for some reason Landon wasn't as interested in climbing these rocks as he was at Arches National Parks. He immediately exclaimed they were too high and he would hurt himself. As we started our hike we came across a number of pine cones and buckeyes littering the valley ground. Growing up with an Aunt who was a die hard Ohio State Fan, I'd seen many buckeyes in my life, but none like these. They were huge. Also huge, were the pine cones. Even the pine cones from some of the tallest trees in Yosemite had nothing on these. 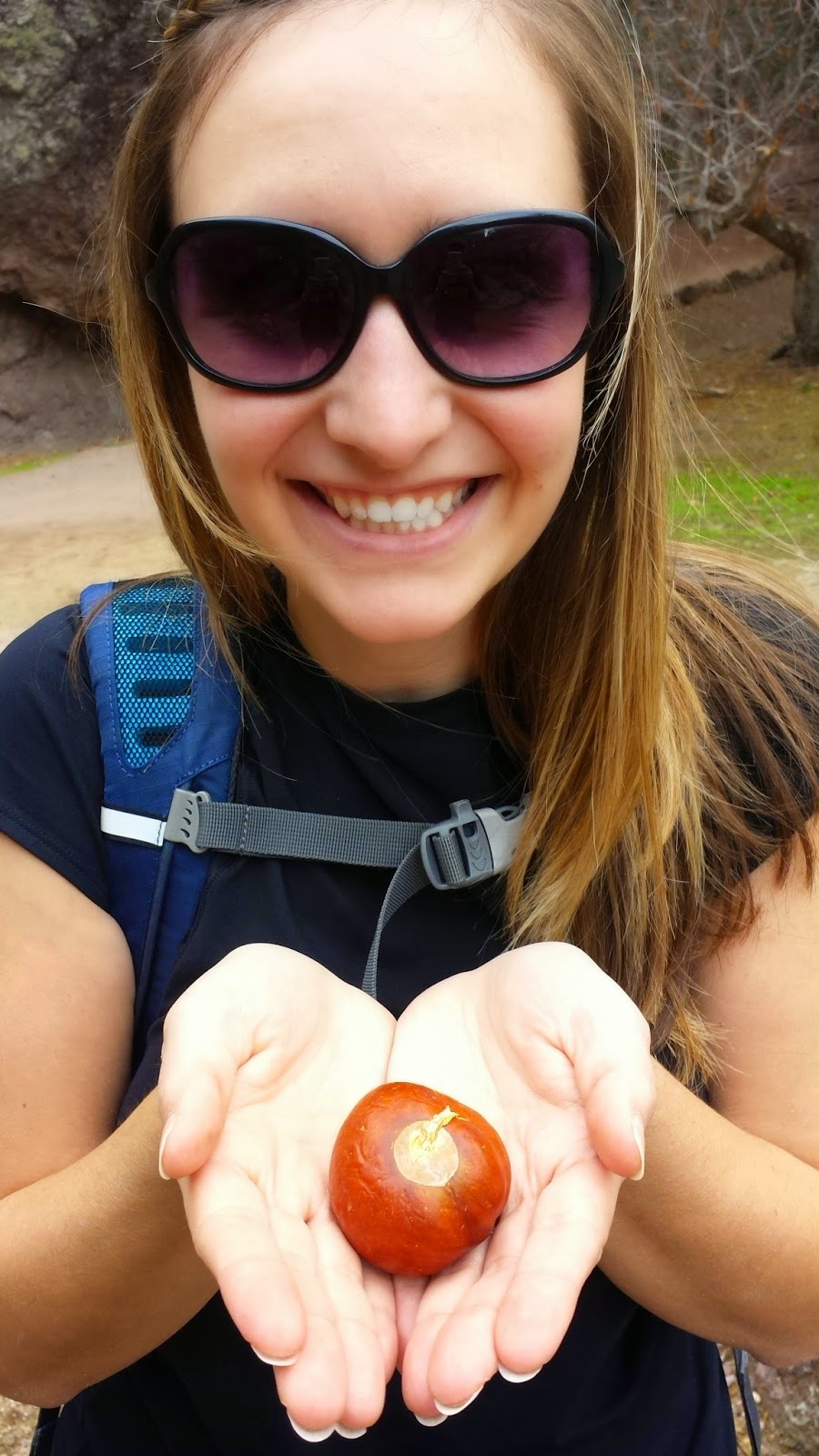 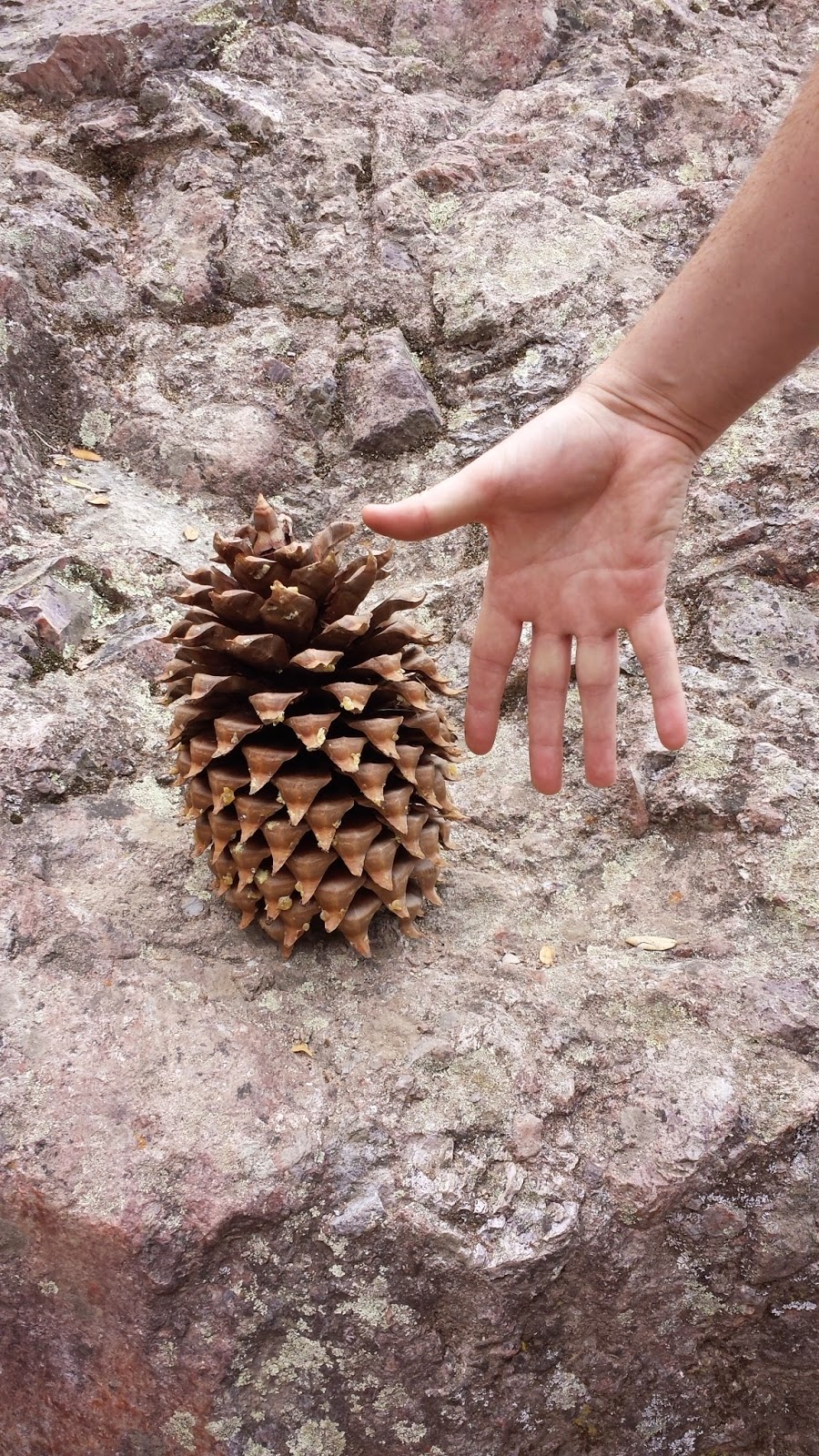 We took the path upward first, leaving the caves for the end of the hike. With only a 100 feet elevation change the initial climb took us up out of the floor of the and gave us a vista of the formations. You can see the trail weaving through the trees in this picture. 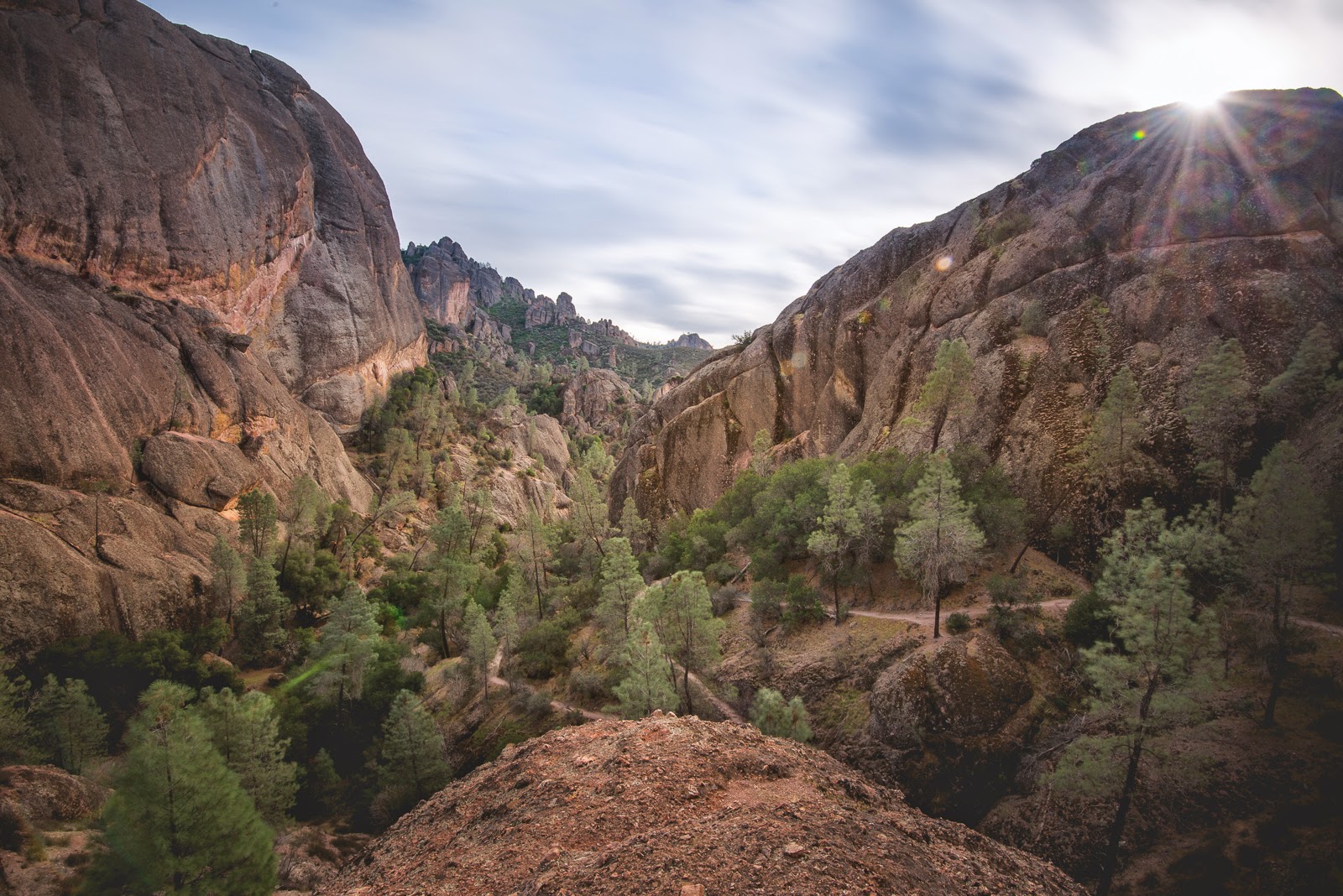 What's hard to see in the pictures is just how colorful the rocks were. With shades of red, brown, black, blue, green, and gray. The sun shining directly on the rock face brought the colors to life. If the sheer size wasn't enough to impress, the natural rainbows on the rocks sure were. It was nothing like I had ever seen. 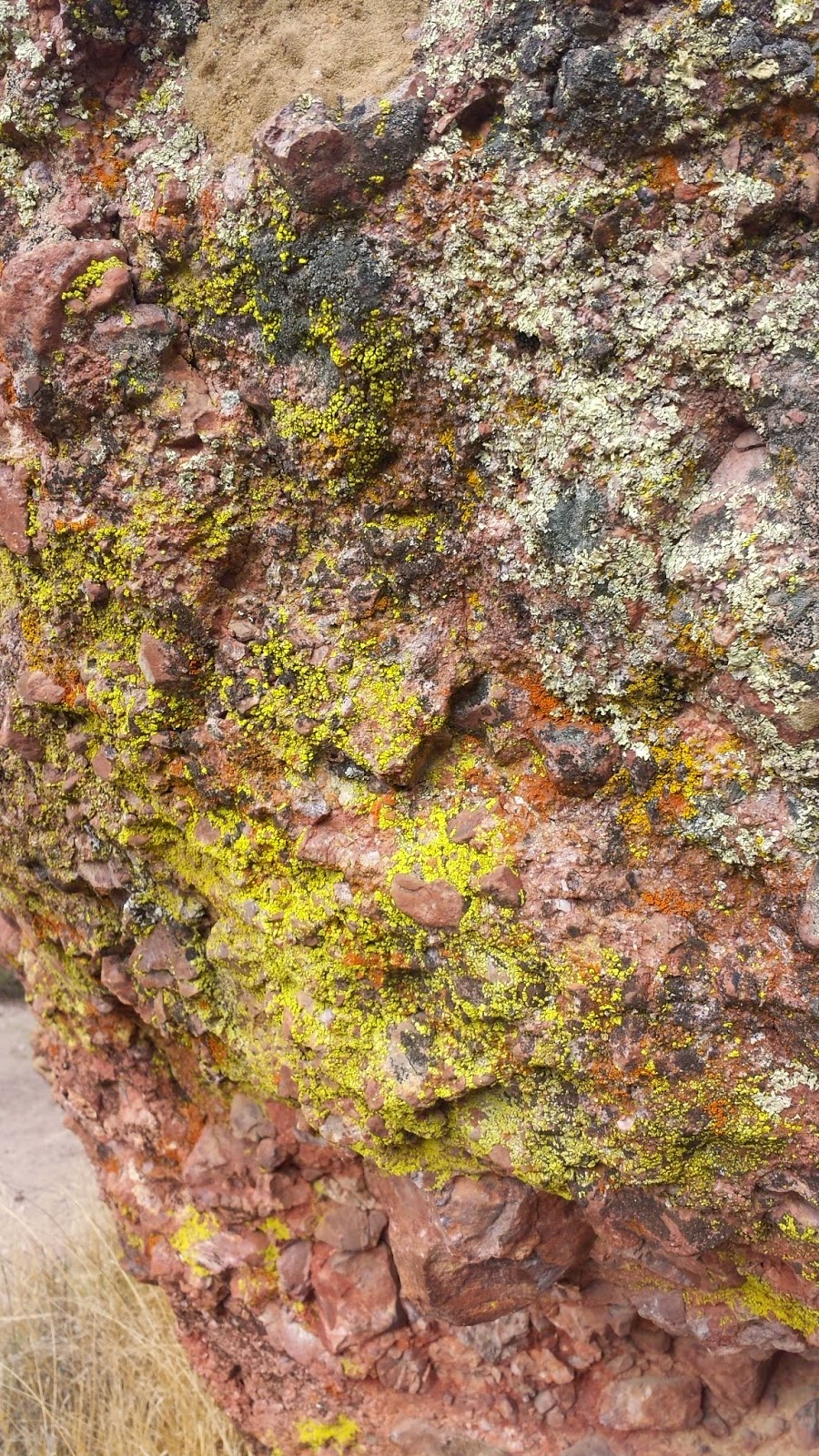 When we were at the visitors center the park ranger asked if Landon wanted to earn a Junior Ranger badge. Any kids ages 3 and up can participate in the Junior Ranger program and it is free. The ranger gives them a booklet for activities to complete on their visit and once they have completed any six within the book they earn a badge. This was something I had heard about, but we hadn't participated in at any of the parks. Although Landon was a little young for some of the activites, he still tried and it was a great way to keep him busy while Adam took pictures. 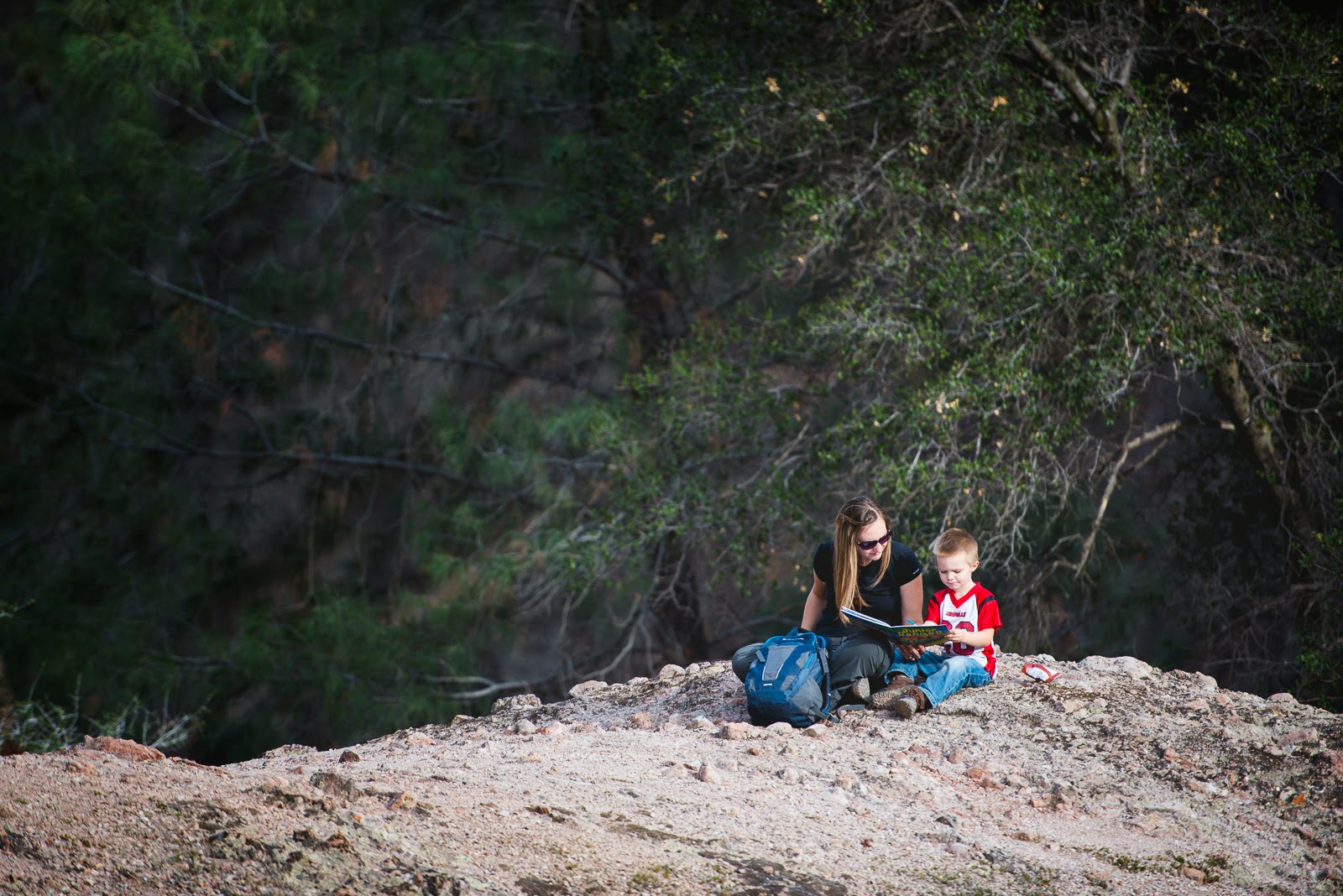 The activities were fun for kids and required them to interact with the park. Some included drawing the caves and naming animals inside and other required conscientious habits while visiting the park. His favorite was tracing the buckeye and drawing the winter leaves on the buckeye trees. 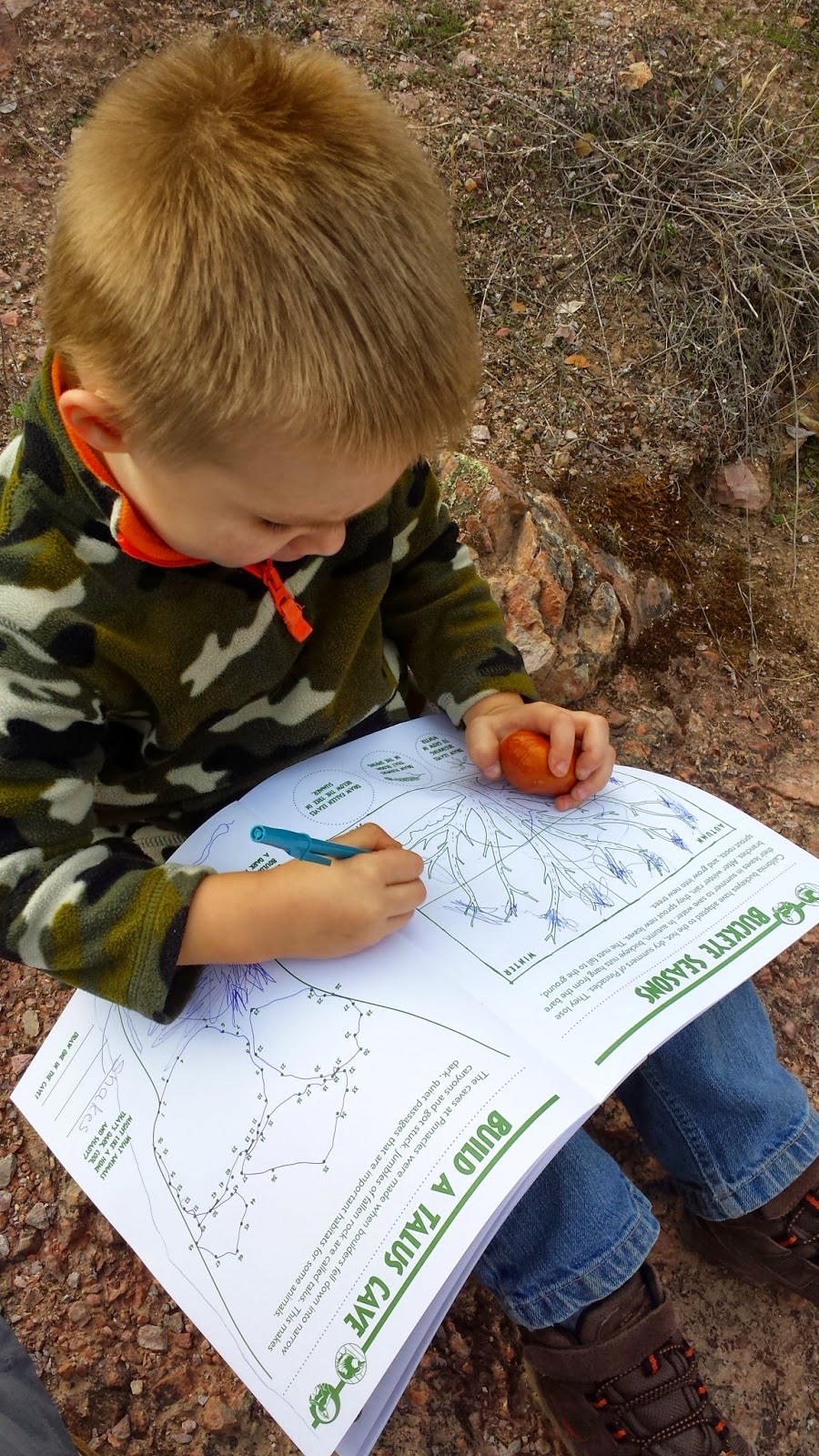 One our way out to Pinnacles the weather was really gloomy. We had driven through rain most of the two hour drive, but we were very fortunate with clear skies and mild temperatures.  In the Summer, the park can reach well into the 100's and that would be way too hot for any of us to enjoy. Instead, we enjoyed a crowd-less hike and were able to stop and go at our pace. Landon exploring and Adam taking photos. This photo was about at the crest of the hike, before it starts heading back down. 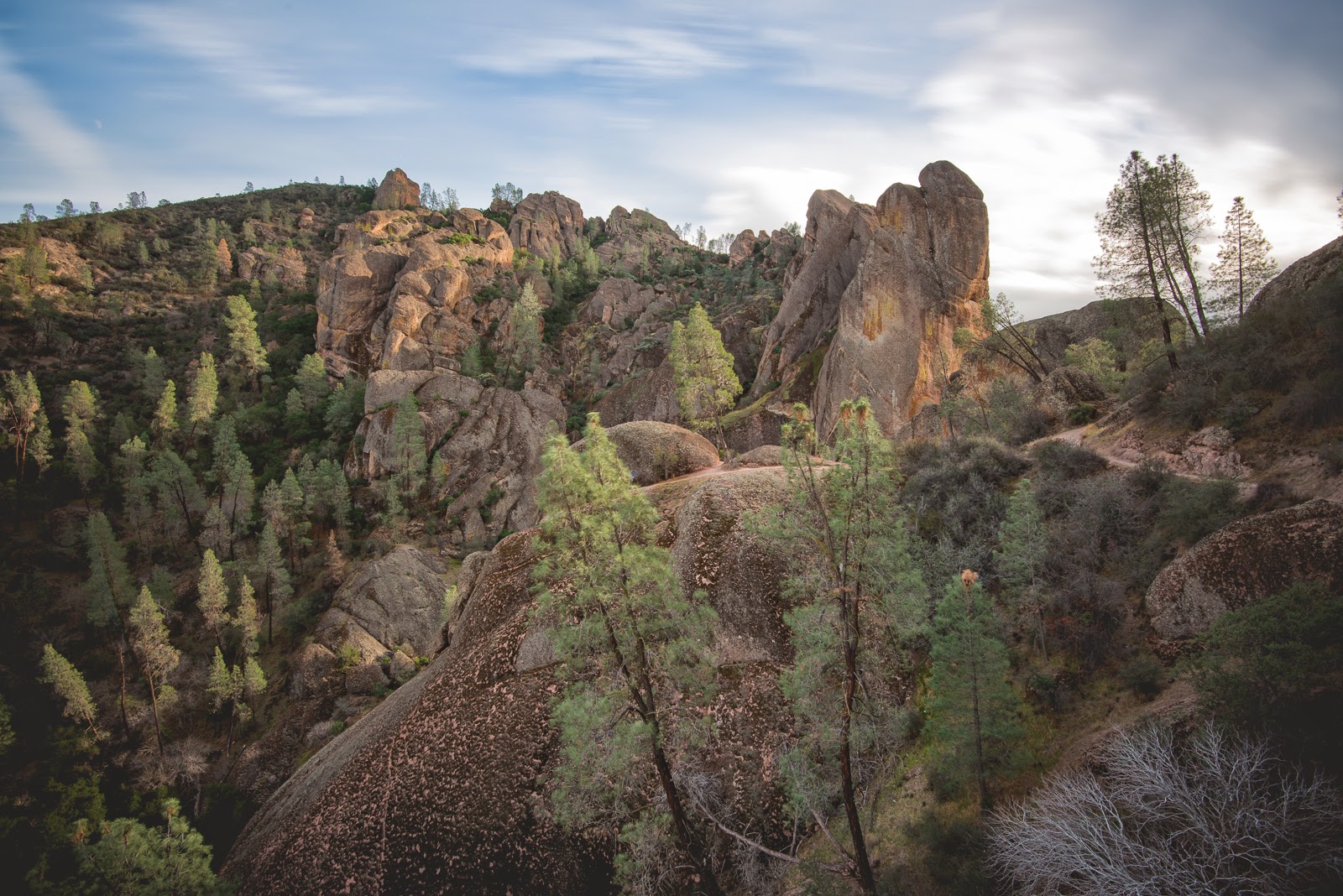 Another favorite activity of Landon's while Adam takes pictures is to eat. I've learned to ALWAYS bring plenty of food. Nothing is worse than a hungry whining boy in the middle of a hike. I've made that mistake before. So while Adam sets up for some long exposures, Landon enjoys a sandwich. Hands down, food is the best way to get him just sit still. 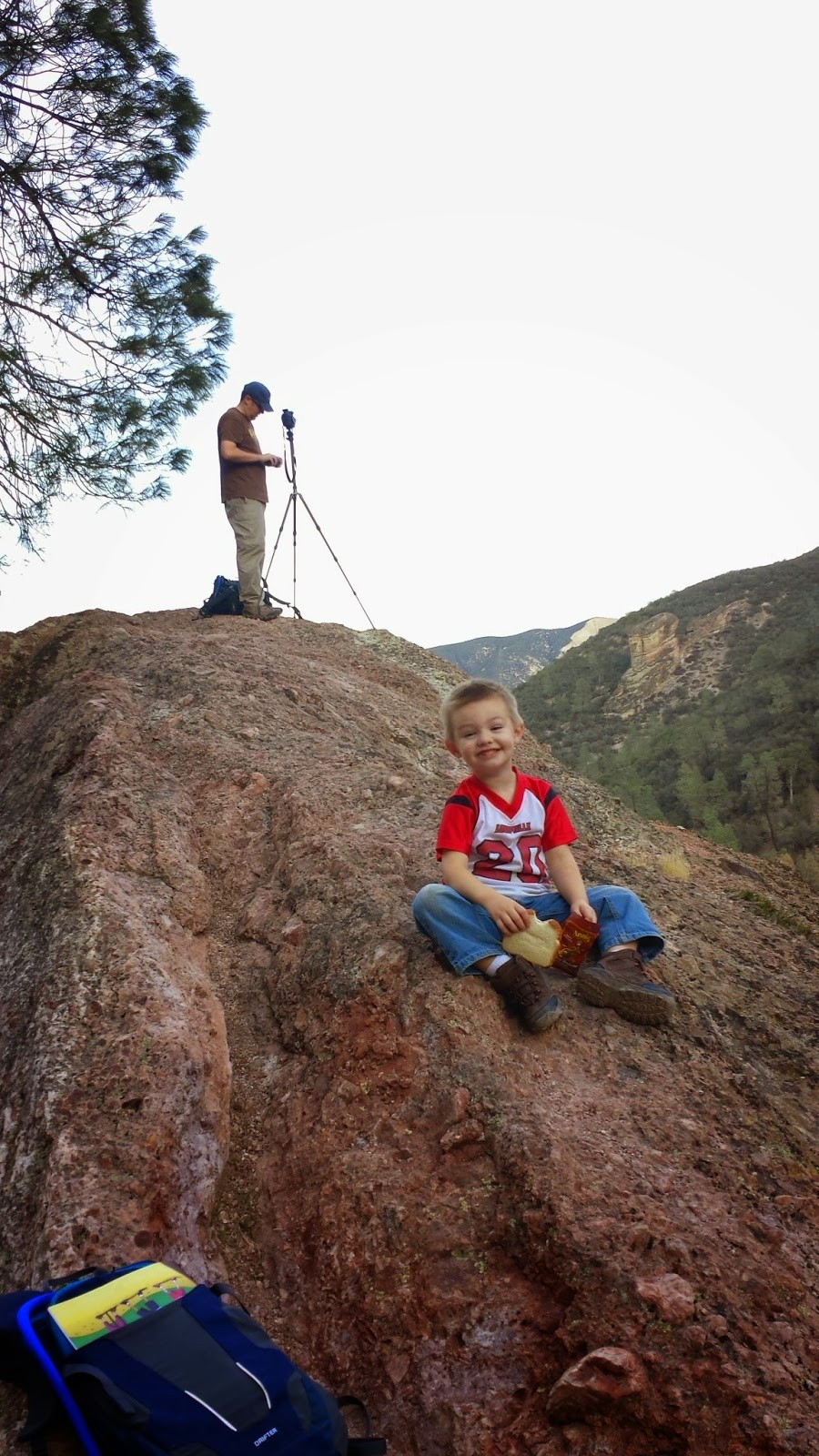 As we made our way down we came across the Balconies Caves. We didn't realize until we got to the park that you can take the trail through the cave and so we were a little unprepared. We had read that we would need a flashlight or headlamp, but we first came into the cave we didn't think it would be necessary. 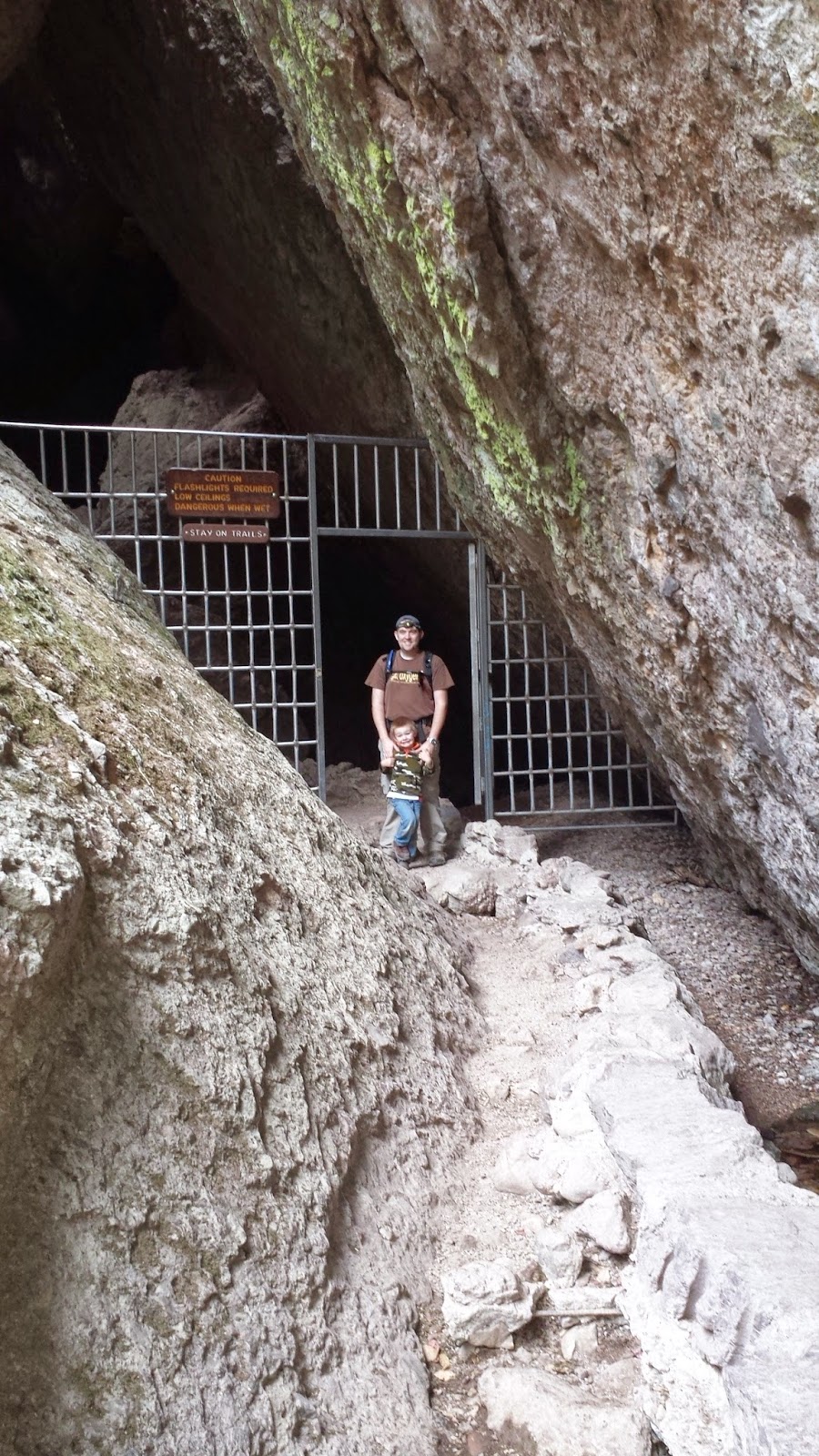 Boy were we wrong. Adam happened to have his headlamp in his bag, but we didn't bring Landon's. I used my phone's flashlight. The caves were formed by tallus which are fallen boulders that wedge inbetween the rocks and create a pocket of space underneath. In some places the light came through the boulders like here. 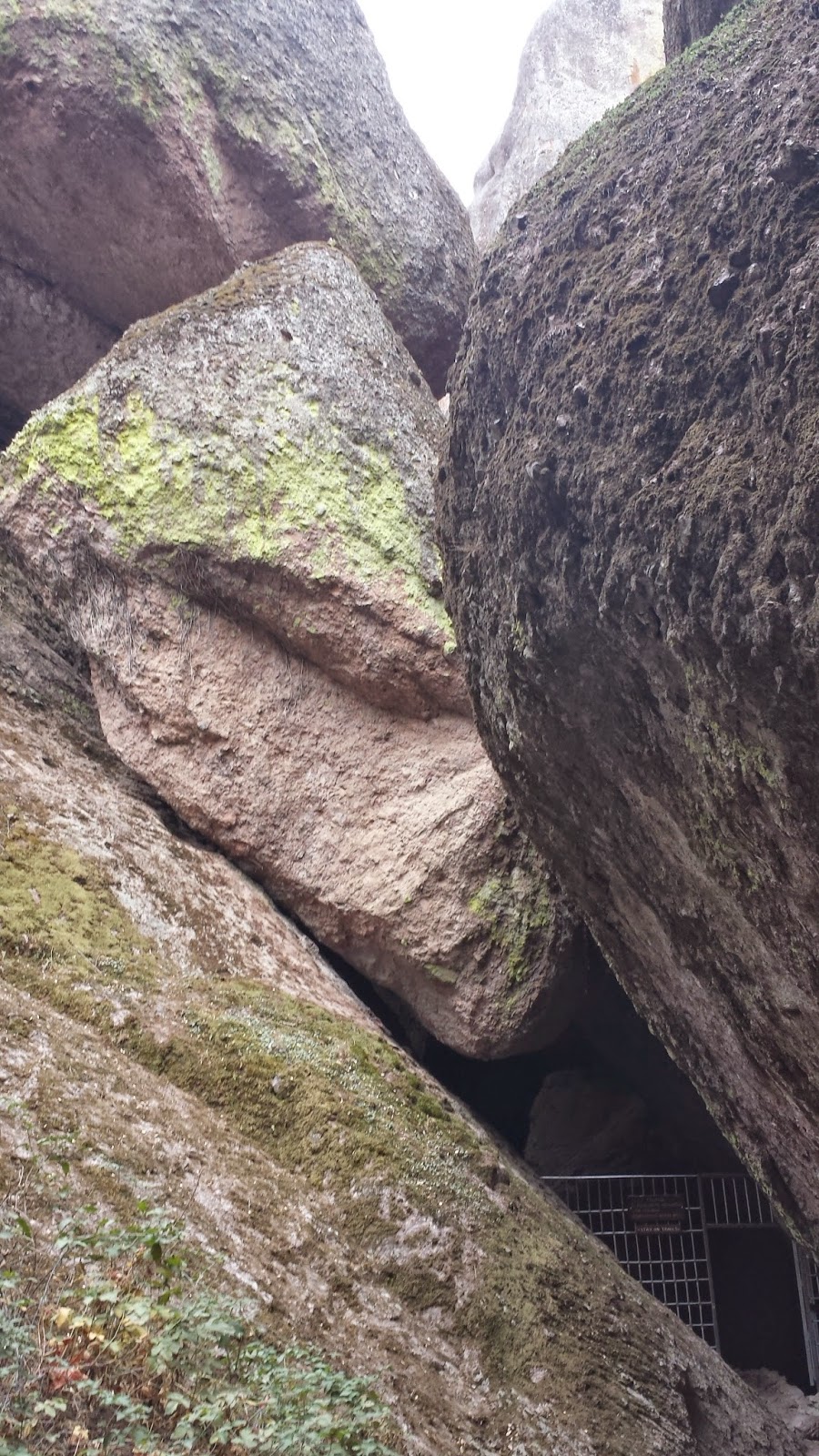 But in other parts, it was completely pitch black. Landon had a ball climbing up and over the rocks and asking if monsters were in the cave. 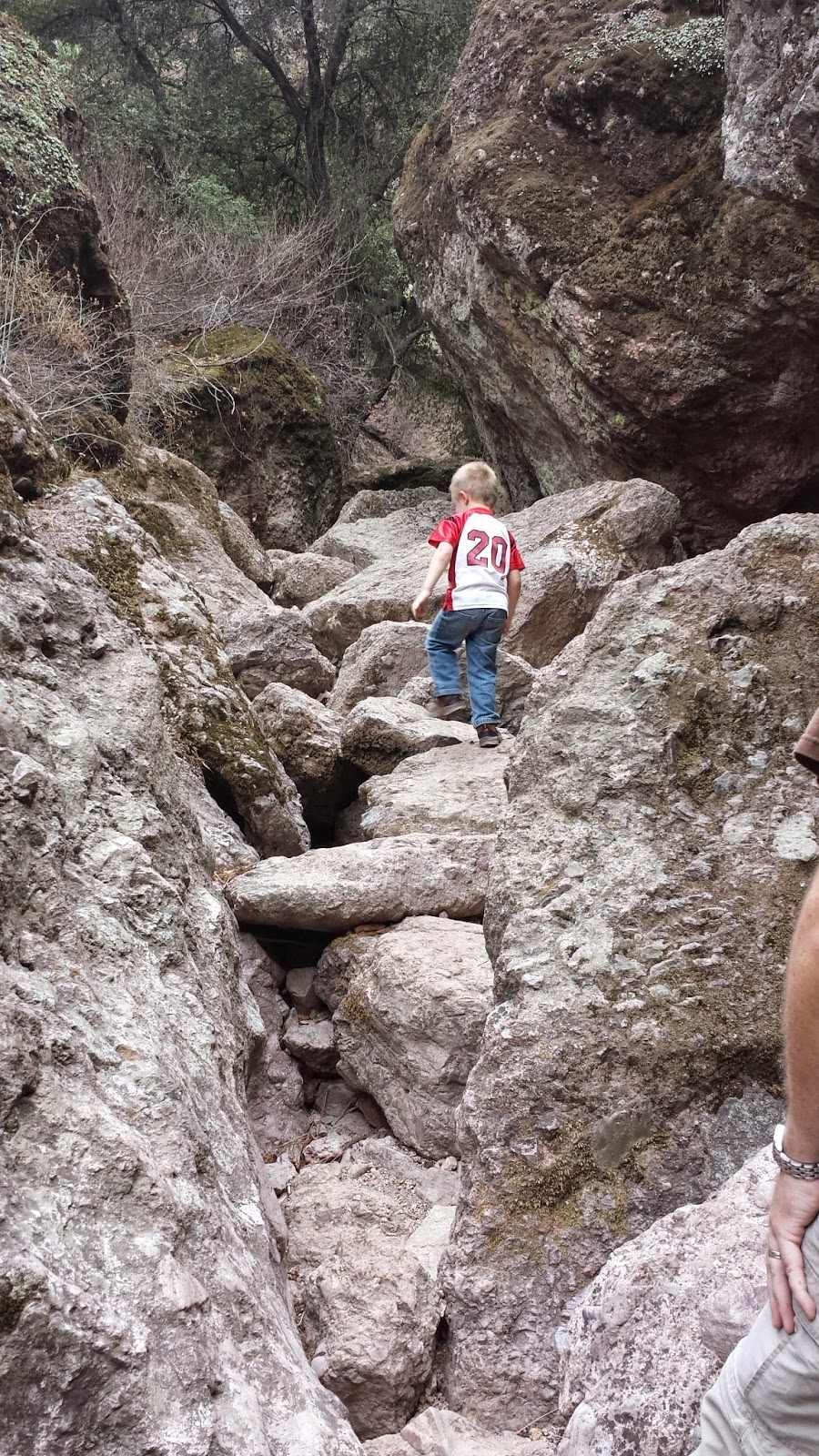 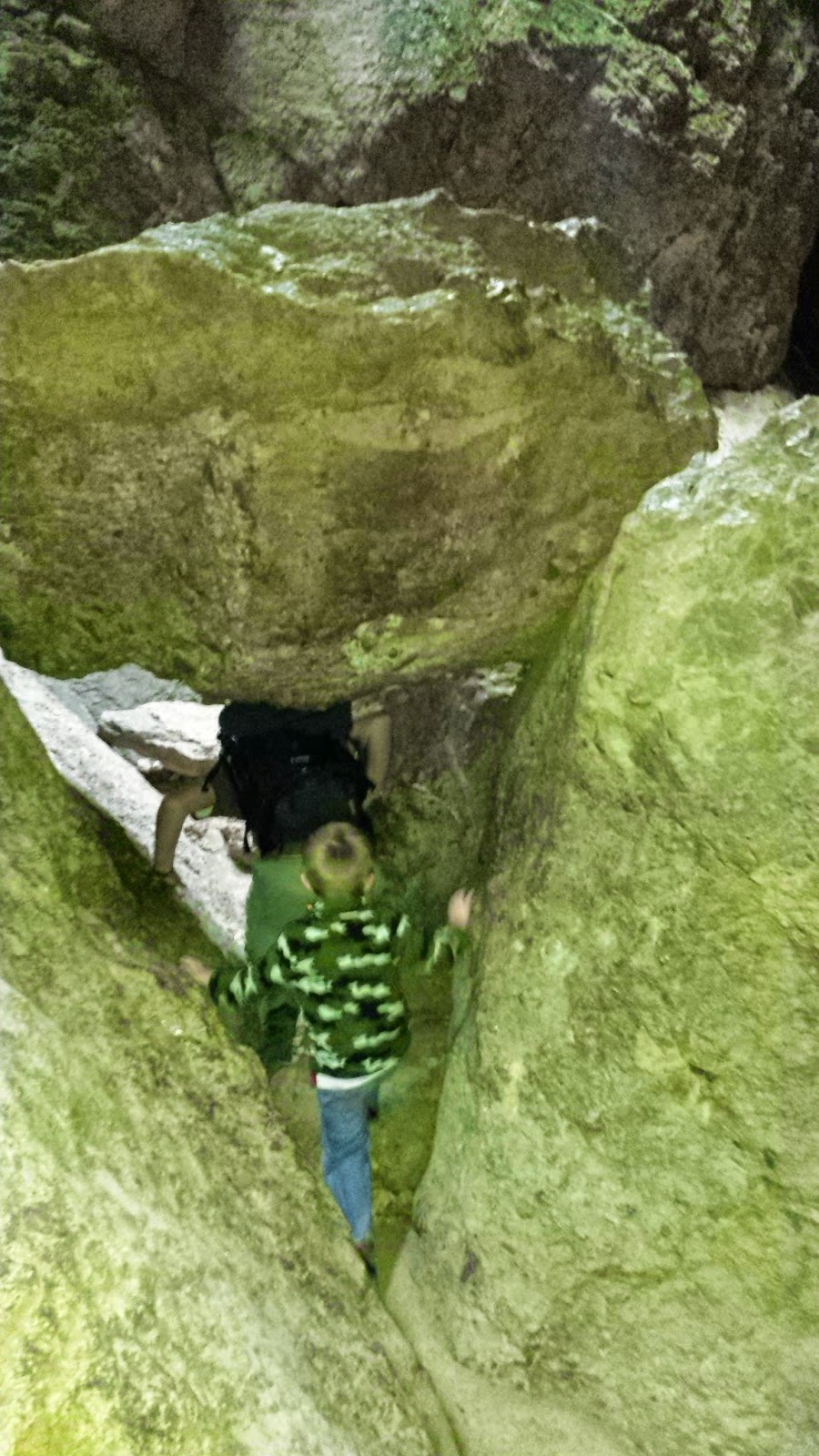 He followed right behind his Daddy and did amazingly well. There were some pretty tight places and tall steps to climb and they all seemed to be in the darkest parts. Some of the boulders were pretty low too which required bending down as low as you could without actually having to crawl. We even managed to have a little fun with the tallus. 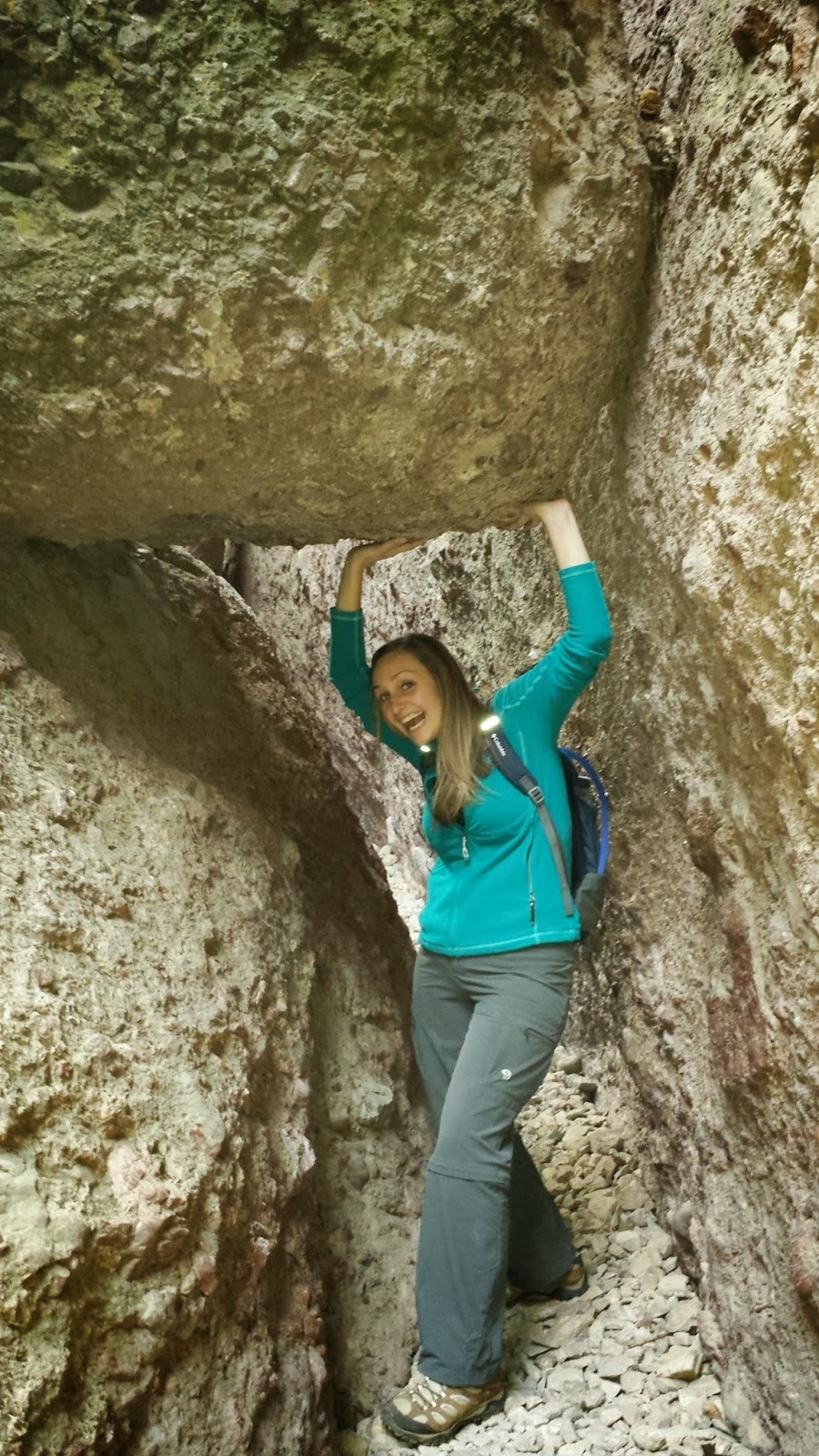 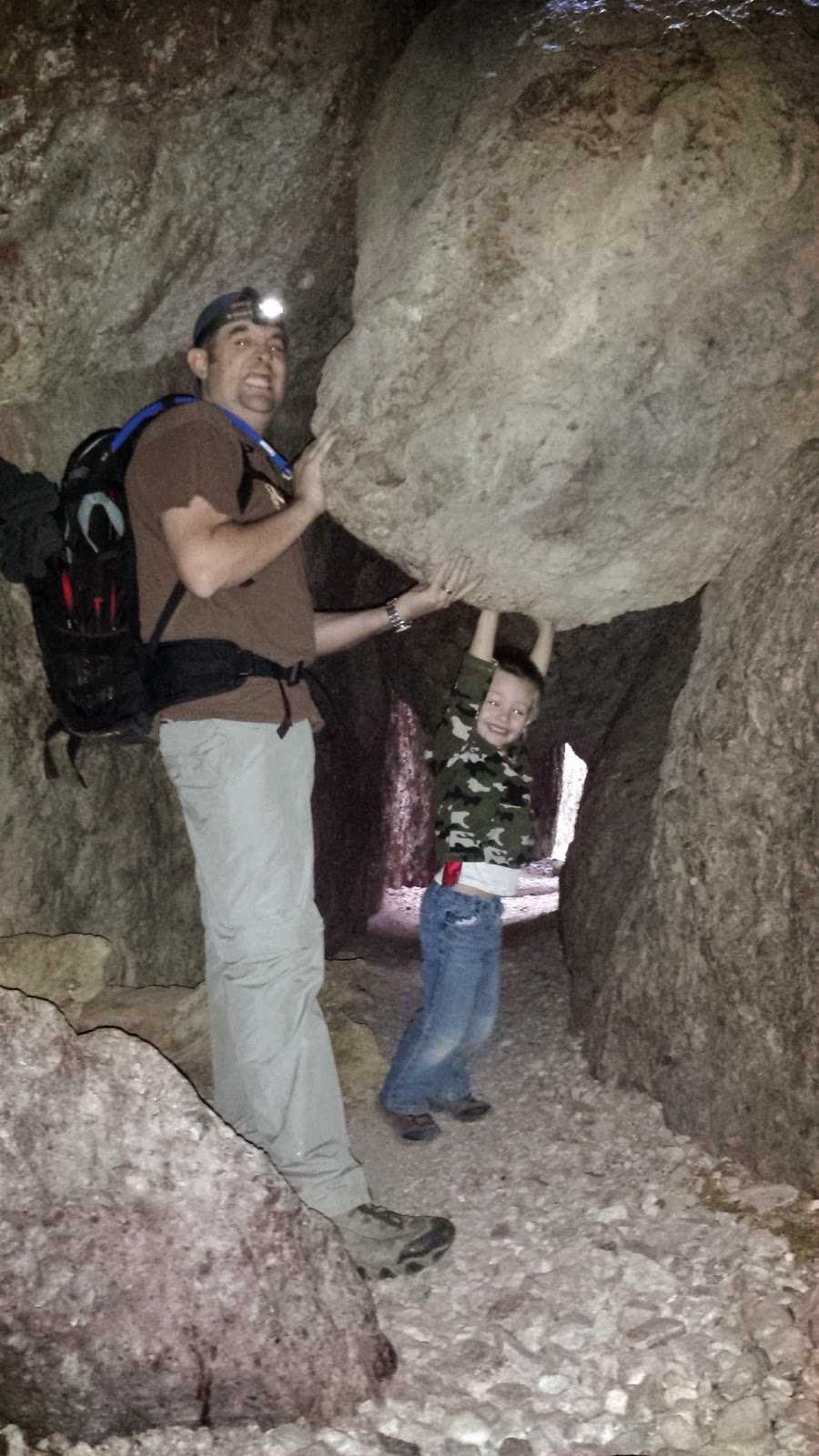 Don't be fooled by my face though, I was taking up the back the entire time I just kept thinking that if I saw a tarantula I would run away screaming back the way I came. Who knew what would lie ahead after one and I didn't want to run over my family on the way out. Had we planned better and had more lights, we could have taken our time a little more and looked for bats. We didn't happen to see any, but we were only focused on the ground.

Once we came out of the cave it was only almost the end of the hike. It definitely didn't seem like 2.4 miles even to Landon who, for a change, was over it before we got to the end. He's gotten his stamina up a lot over the last year and this hike seemed to a breeze for him. 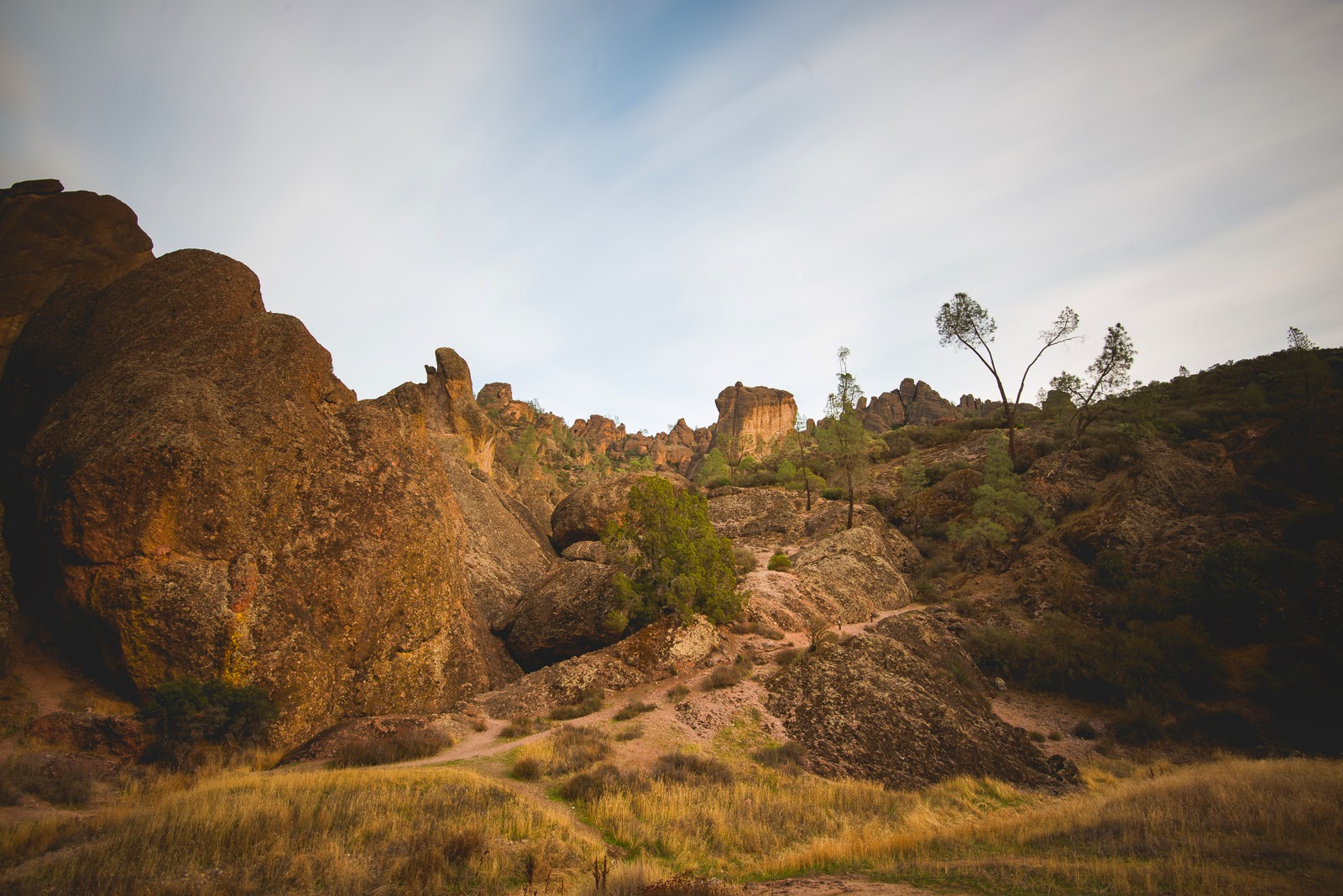 Once we were back to the car, we went back to the visitors center to show the ranger his booklet and earn a badge. I didn't realize it at the time, but when a new ranger get his first badge they have a to take an oath. It was unexpected and the cutest thing ever. As she started, I pulled out my camera and caught most of it on video.

After taking his oath, he received a cute little ranger pin and a woodpecker badge. We plan to get him his own camelpak backpack for Christmas so I'm going to have it sewn on there for him. I'd recommend anyone who visits a park with kids to participate in these ranger programs. I wish we had done it at all the parks we've visited recently. 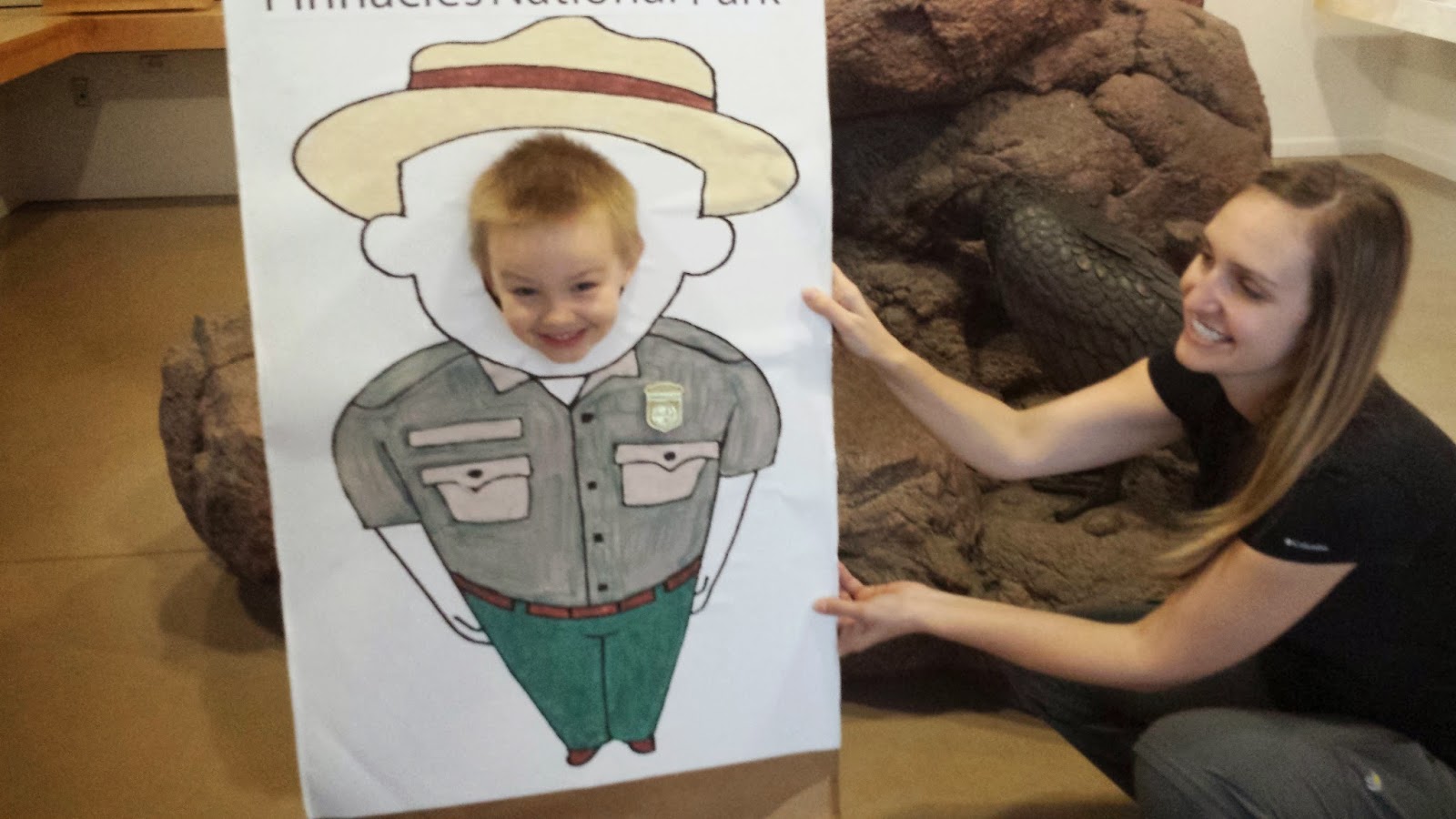 Since we didn't come across any tarantulas, I have to say Pinnacles was an extremely enjoyable little day trip for us. Had I known about the tarantulas, I wouldn't have gone. I'm still not sure I will ever camp there. I may have Adam research a little about tarantulas and when they are active. However, I will be sure to visit the park again. One thing we really missed was seeing a California Condor. They like to ride the warm air pockets around the balconies, but we didn't see any while we were there. It would be really nice to go back another time and witness one as long as the tarantulas
continue to stay in their holes.