We had a wonderful, fun, Christmas filled weekend and instead of creating the world's longest post I'm going to break it down into two (probably still super long). You always know it's been a really good weekend when you get to work Monday morning exhausted. With so much to do this time of year, we took advantage of it and fit everything we could into two way-too-short days.

Saturday, Landon woke up to find that St. Nicholas had left him some treats in his shoes overnight. This year was my first year doing this at home although his daycare celebrated it before. I'm thinking next year, I will step it up and make him clean his shoes before he leaves them outside his door. He liked the candy and we threw in a little flash light too, which he really loved. 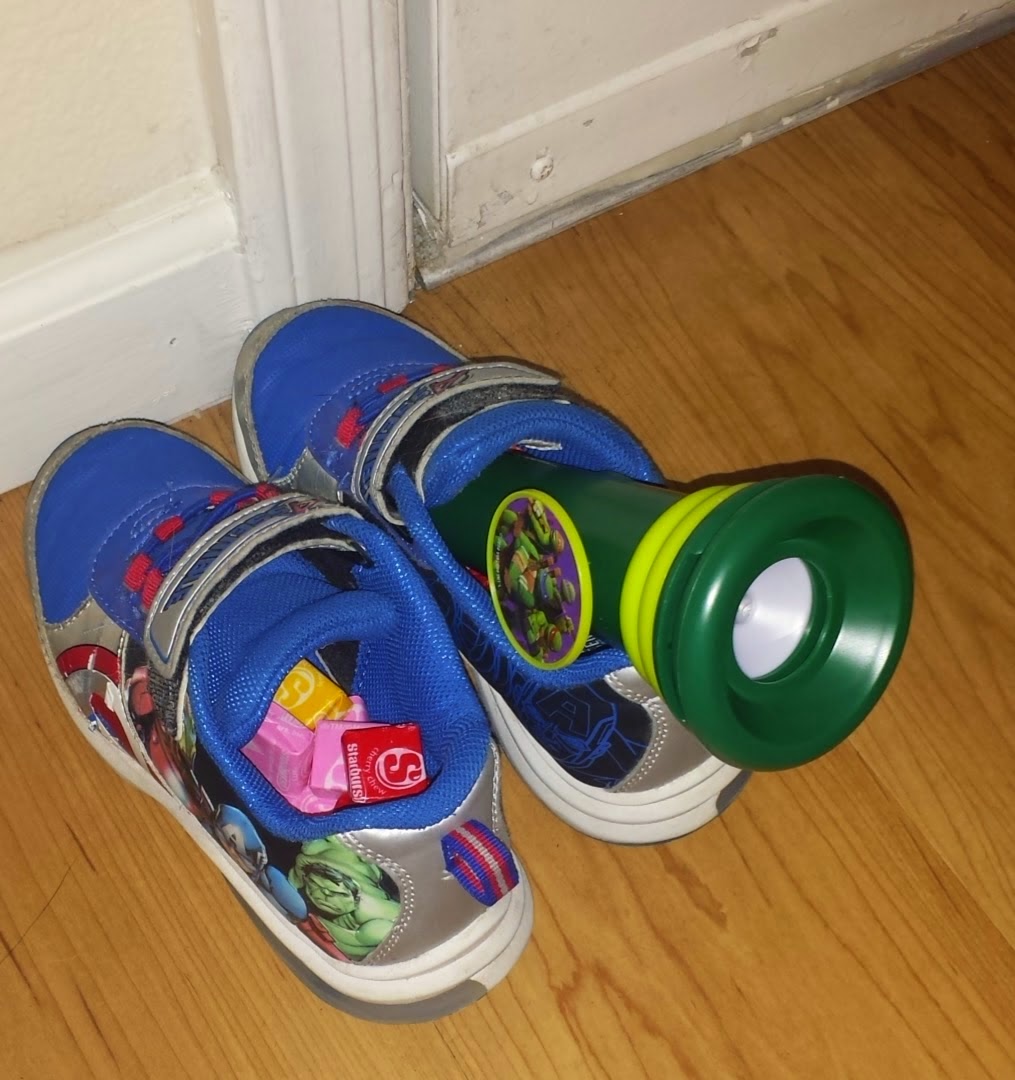 Afterwards, we went to Panera Bread for some breakfast. Thank God the closest one is about 15 minutes away or I'd be going every day for a egg white and cheese sandwich. Next we stopped at REI because I had a $100 gift card burning a hole in my pocket. I got a lightweight backpacking chair so I can sit when Adam takes forever taking pictures and a headlamp. Now I can go through the caves and see all the tarantulas! Once we were done there, we headed over to Barnes and Noble to pick up a special book. On Friday night, Adam pointed out that my nightly advent readings were not really "age appropriate". I had to admit he was right and so after a little searching online, I found an advent schedule for readings out of The Jesus Storybook Bible. A million times more appropriate and illustrated! I didn't want to wait for Amazon to ship us one, so we bit the bullet and dealt with all the holiday shoppers. There was a nice surprise inside where a group of school children was serenading everyone with Christmas music. 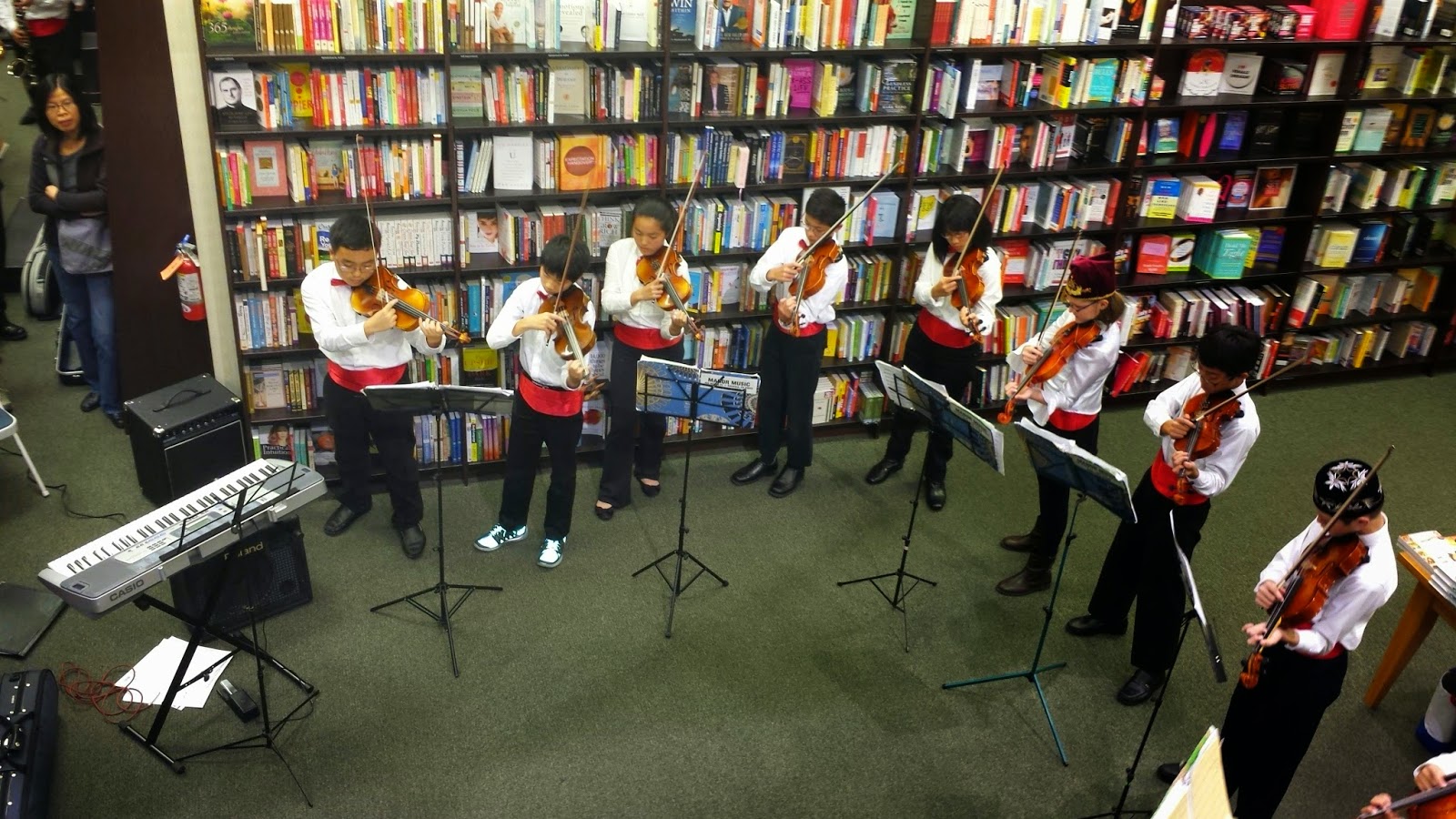 They couldn't have been any older than 10, but you would have thought it was an adult symphony when you walked in the door. It was beautiful! Still, we were at mall during Christmas with a three year old so we got the book and left as quickly as possible.

We made our way back home so Landon could take a nap before we headed back out for the evening. This was an extra special evening and all we told Landon was that it was a surprise. Once he was up, we took him across the street and down into the subway for his first ride on BART. He was pretty excited to see the trains and to get on one of them. As a young kid in a big city, he's got to learn the ropes. I swear in Japan we saw kids his age riding the subways alone.


When we got on the train he took everything in and noticed the reserved seating. On it, was an outlined picture of an old man and a pregnant women and when he saw the pregnant women he asked us if the sign meant people are supposed to put balls under their shirts. He loved the subway with all the people he got to talk to and all the new things to look at. We got off at the Powell street station, right in the middle of the hustle and bustle and walked a few blocks to Union Square. I thought Landon would love the huge Christmas tree, but he wasn't overly thrilled. I on the other hand, was. 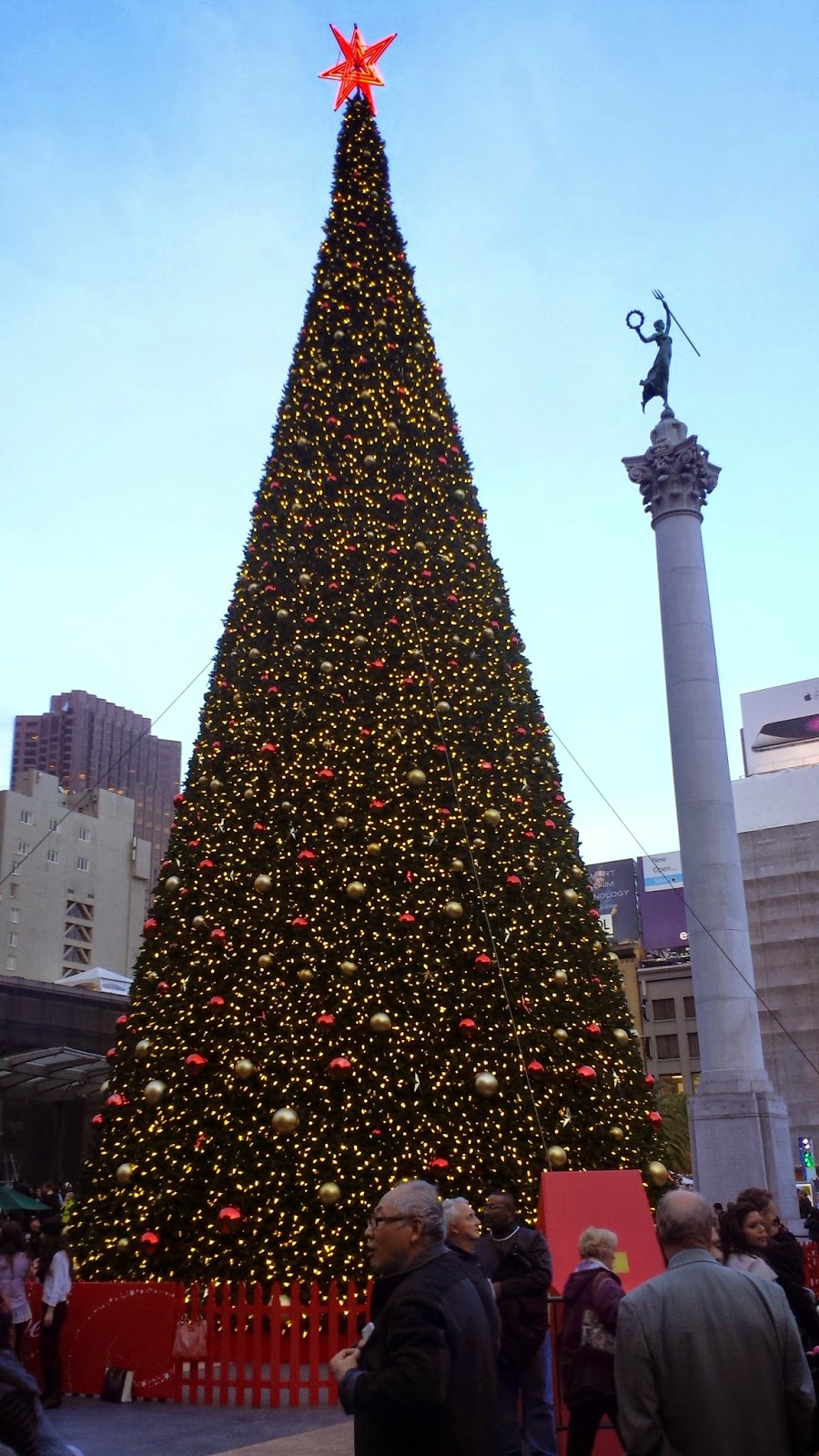 He was thrilled when I showed him the ice skating rink and asked if he wanted to go ice skating. Did he ever! We got in line at 4:45 to buy tickets only to find out the rink was sold out until their 8pm session. Instead of killing 3 hours we looked up the rink at the Embarcadero (near our old stomping grounds) and found out that their 6pm session was still open. Since we had over an hour, we decided to walk the mile to rink. Adam and I both agreed that this is the most excited Landon has ever been for anything. I tried to capture a little of it on my phone while we waited.


We got our skates on and waited for the doors to open. 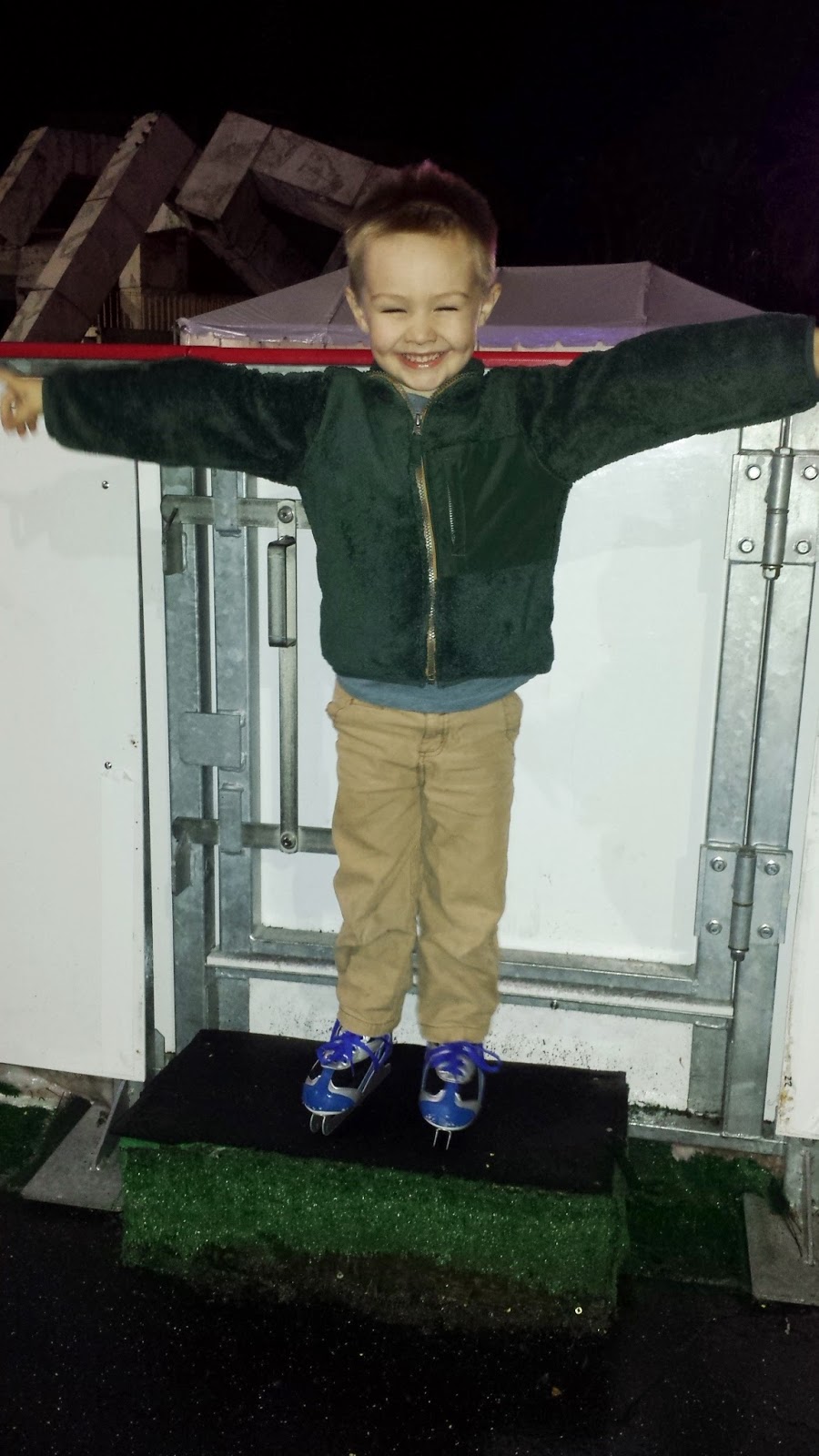 We were the first ones on the ice and I held Landon's left hand while he held onto the wall with his other. At first, he was really shaky, but I kept explaining that he needed to keep his legs straight and shuffle without picking his feet off the ice. He wanted so badly to be really good and he did really, really well. Sometimes he would start to lose his balance and start to get really wobbly, but he would quickly regain composure and start again. He mentioned at one point that he needed to wait until he was "Big like me and Daddy" (his favorite line) to be able to do it, but he kept trying and never complained. I took some video with my gopro and while I still have a lot of learning to do I thought I would share. I know the Grandparents especially will like it. In this video, he actually mentions that maybe he should try skateboarding instead.


He took a few breaks along the sidelines with Adam while I got to skate around a little on my own, but he always wanted to come out again and try. I'm not one to brag on my kid's accomplishments because milestones mean nothing to me, but determination and perseverance make my heart swell with pride. Of course I think my child is precious, and adorable, and just plain awesome, but I think this was the first time I really felt pride in him. It's all about the attitude! I also took some still pictures from the videos. Not the best, but I'm happy to have them.


By 7:30, I could tell he was starting to get tired. So I asked him if he wanted to do something else like going to look at Christmas lights and he said yes. We returned our skates and decided to go back towards Union Square to see the Christmas lights at night. As we started to walk, Landon recognized an ice cream shop we had visited before and asked for a milkshake. Hot and sweaty, we agreed to split one and a few minutes later he was happy as lark making his way back to union square with his milkshake in tow. 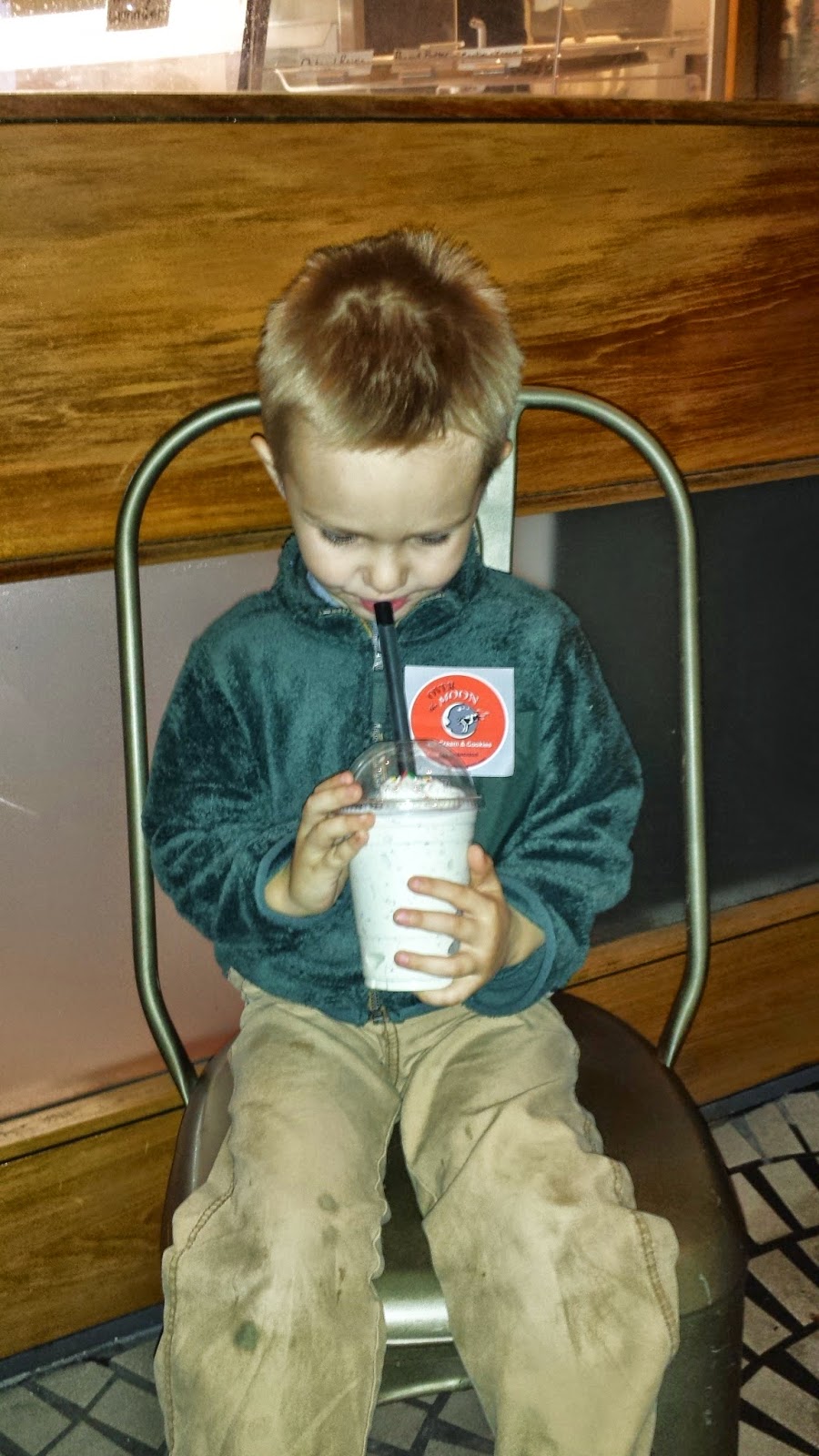 He was so happy in fact, he talked to just about every person we passed. He would say, "Hi! What's your name?" to EVERYONE! And in San Francisco that means vast amounts of homeless people in the city. We are still not sure how to handle his overt friendliness. I think we need to talk to him soon about "stranger danger". On the other hand, I love his friendly demeanor and don’t want to crush that.


We made our way back to Union Square and over the the Macy’s light show. I had heard it was a big event where they closed down an entire street and had lights on the buildings with all kinds of activities going on. Turn outs, it was just a projector playing a screen-saver shot on a building and people walking around. They had lit benches to sit on, but that was about it. 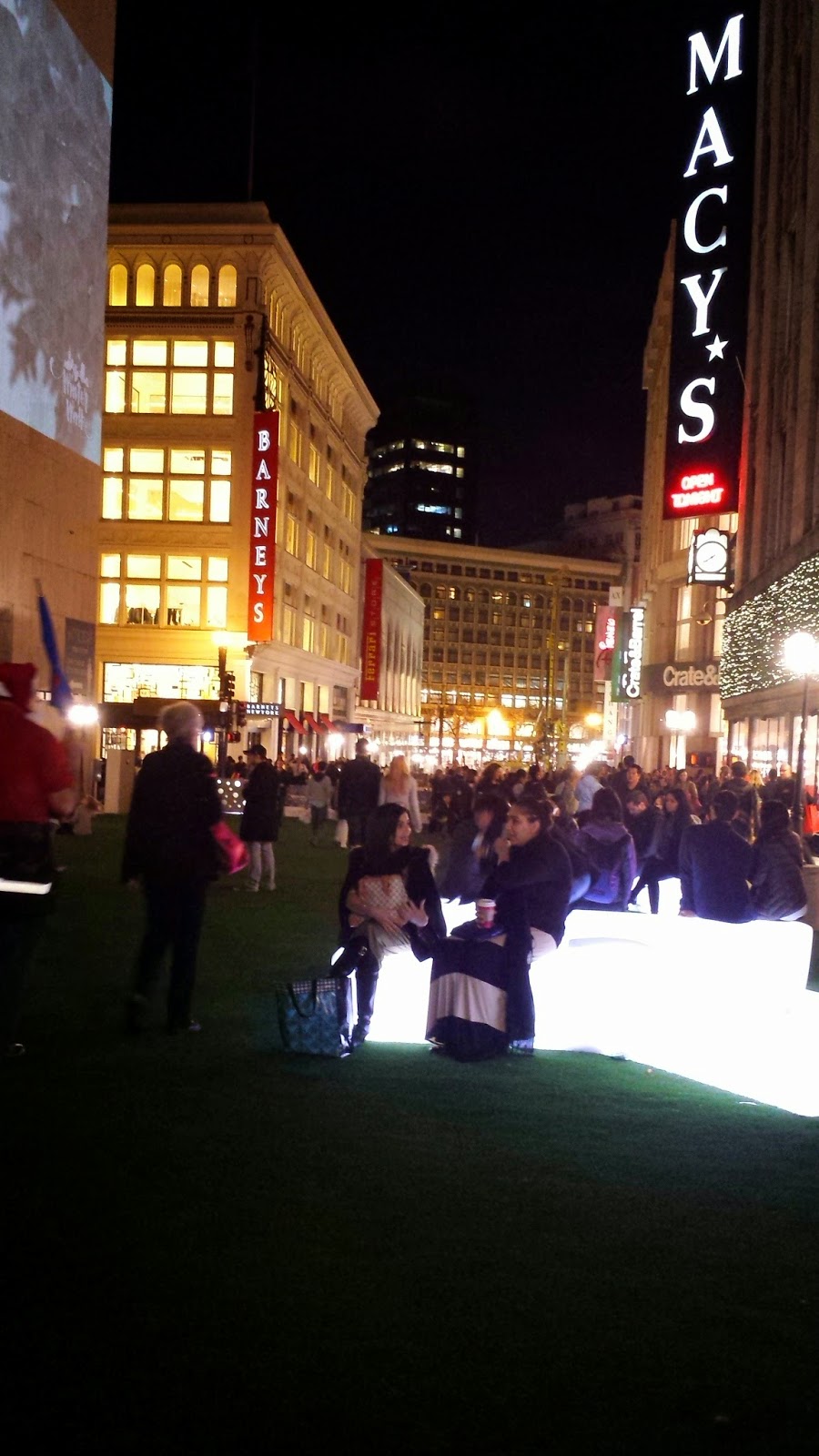 Maybe the party had yet to begin, but we were less than impressed. I was impressed with the the decorations at the department store. They were all so beautifully decorated that I could have sat and enjoyed them for hours. These were actually taken during the day when we first got the square. It was even prettier at night, but hard to take pictures. 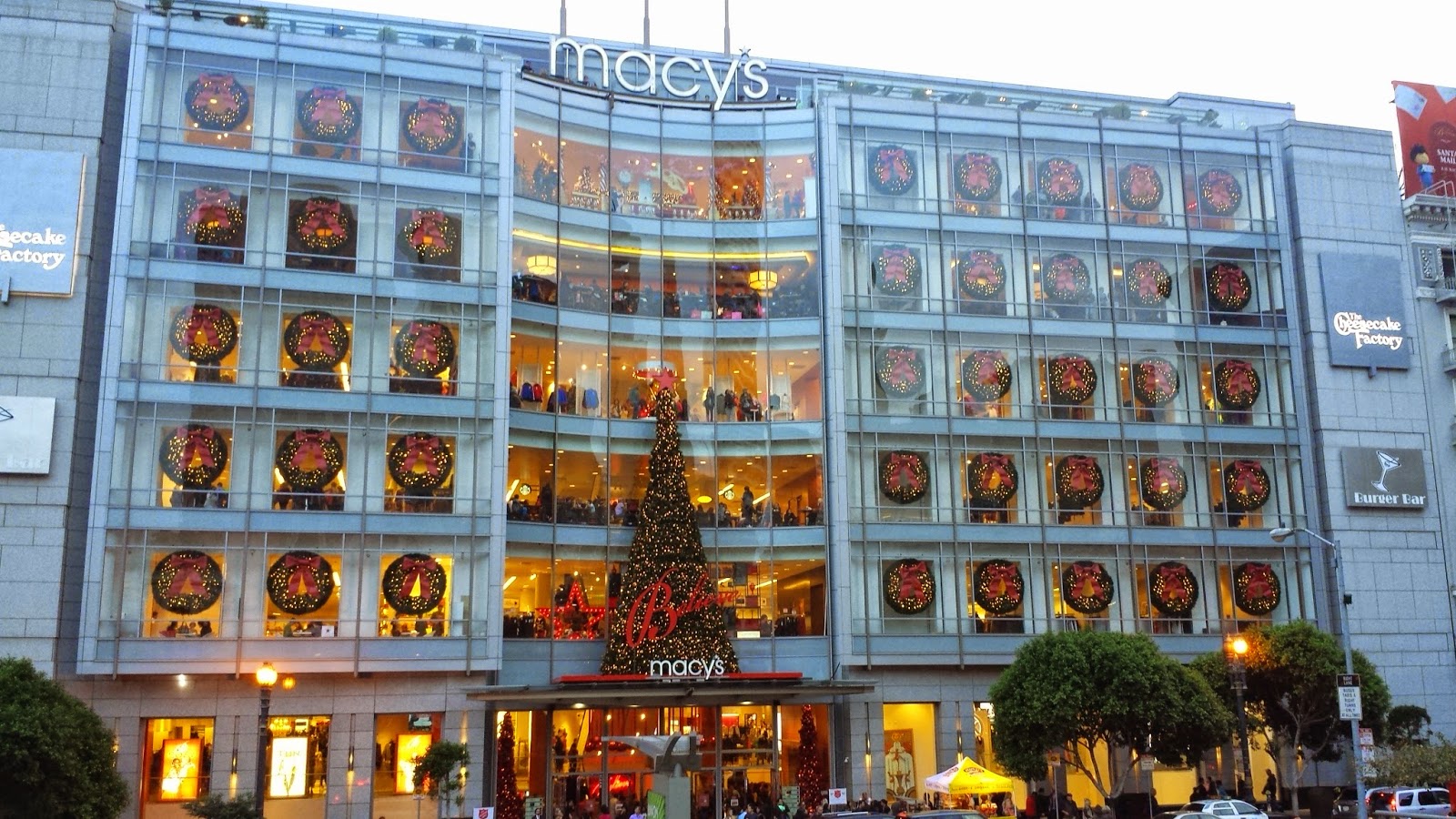 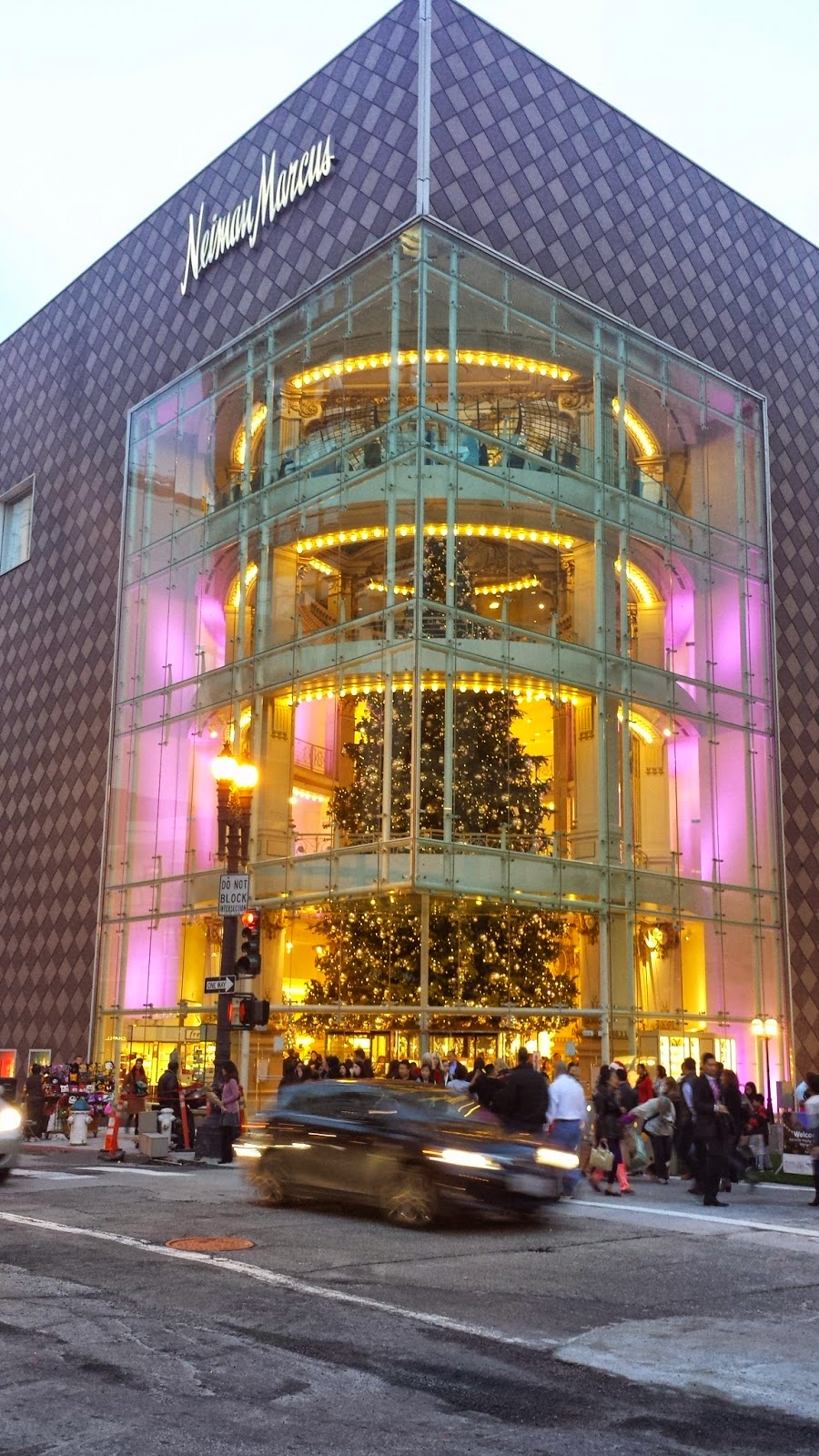 I especially loved the square at night with the lit up palm trees. 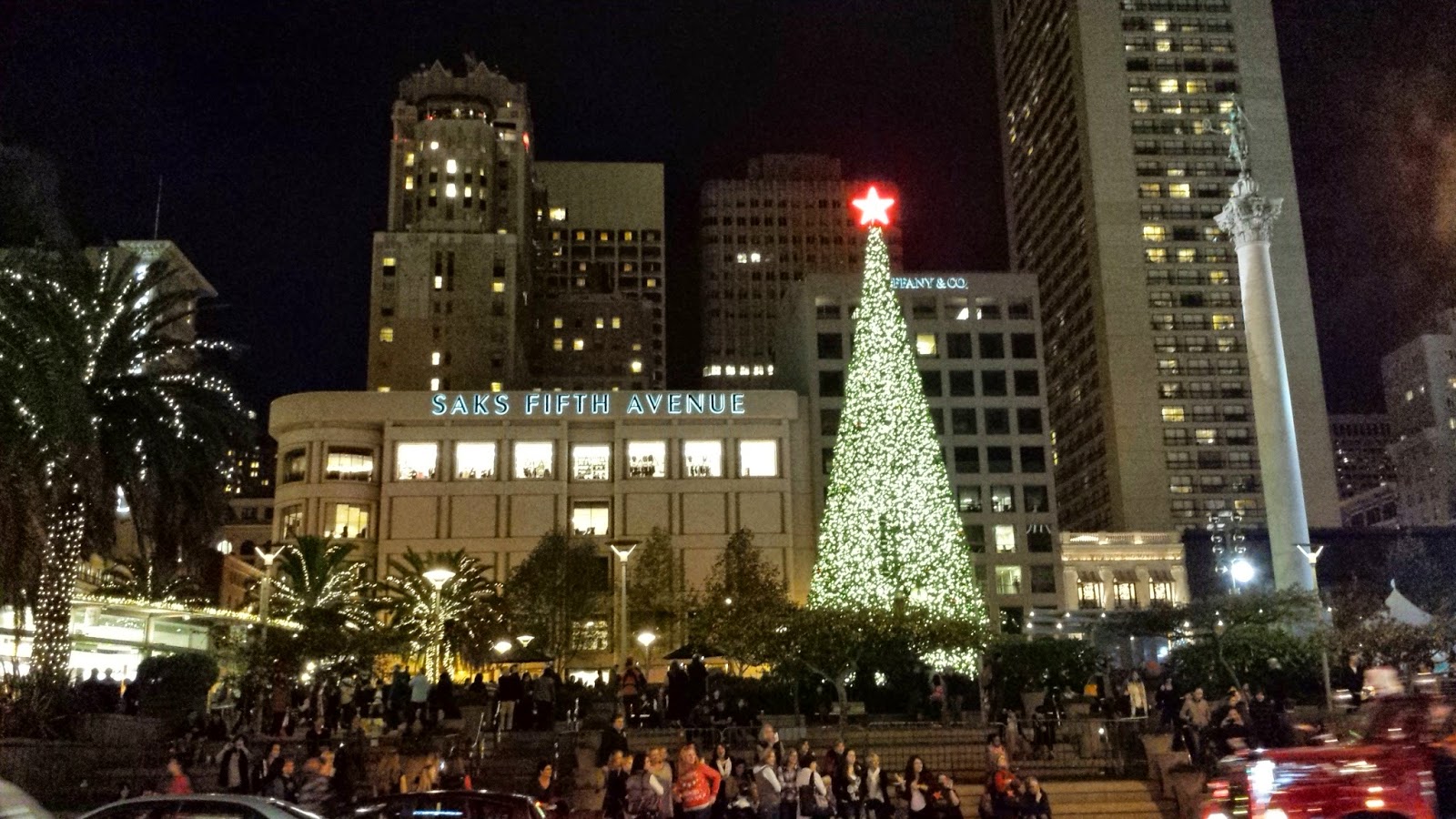 As a kid, I watched movies or shows about the holiday windows in the department stores in the big cities, but never actually seen one. Here, we got to see a number of them. The cutest being the San Francisco SPCA puppies and kitties. They had a black and white tuxedo kitty up for adoption and it took everything I had to walk from that window without it. 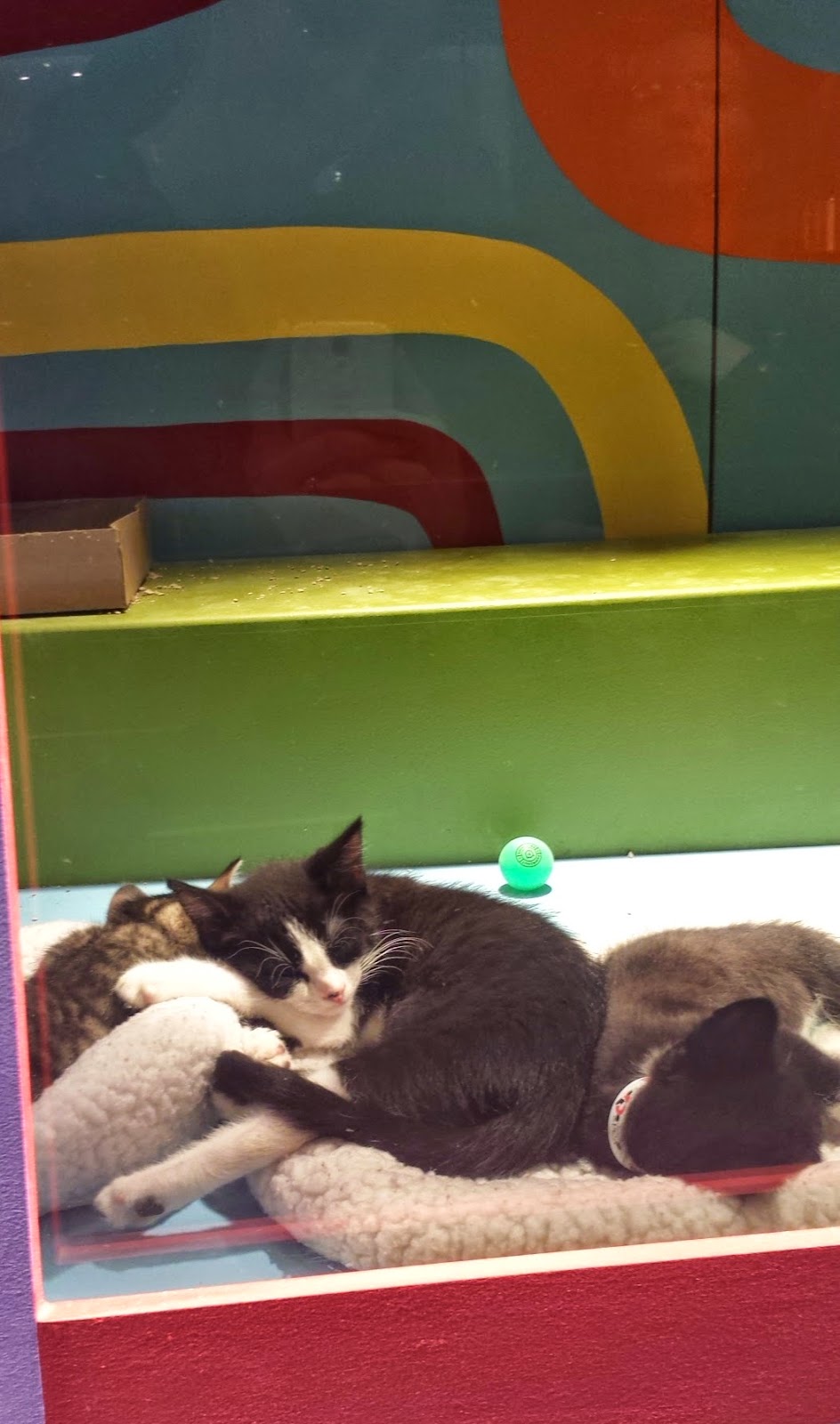 But I did, and we decided to walk down to California Pizza Kitchen for some yummy dinner (pesto shrimp penne is amazing) and wine. Landon drew us robots while we rested our legs from all the walking and activities and enjoyed a wonderful dinner. 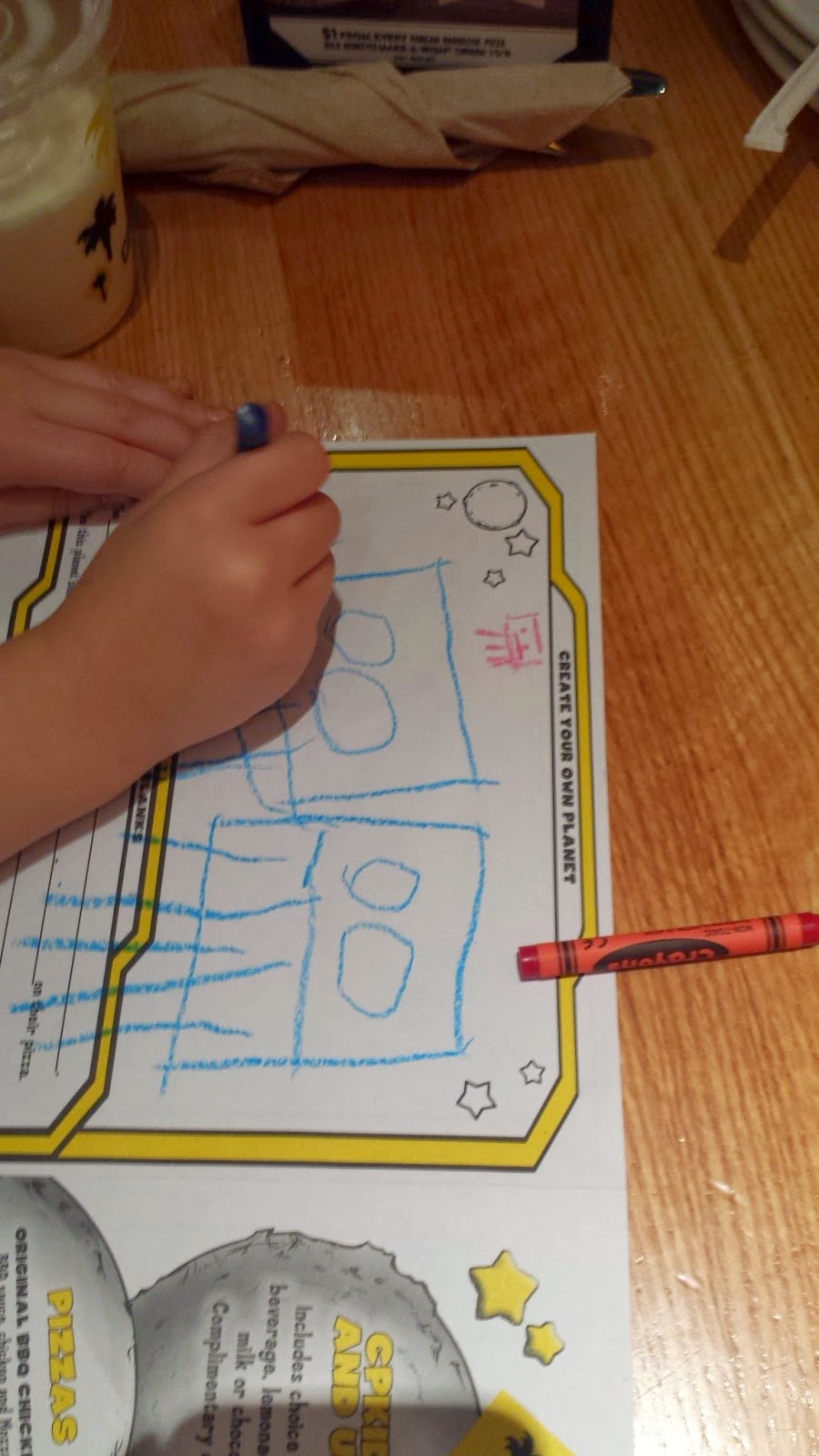 After dinner we walked back to the station, got back onto the subway and headed home. This time, Landon enjoyed the stories his Daddy was telling him more than the ride itself. He still had a blast acting like a big person riding the train. He wants so badly to be big and I'd give anything sometimes just to be kid again for a day. One of life's ironies.We got home around 9:30 (way past his bedtime), took another number off our Santa advent calendar, and read a story from his new book. As soon we read the first story, I knew that this book was a good purchase. Not only were the pictures enticing Landon into the story, but the words were simple and easy for him to follow. Although most of the readings on the schedule are from the Old Testament, they all foreshadow the birth of Jesus and are appropriate for advent. 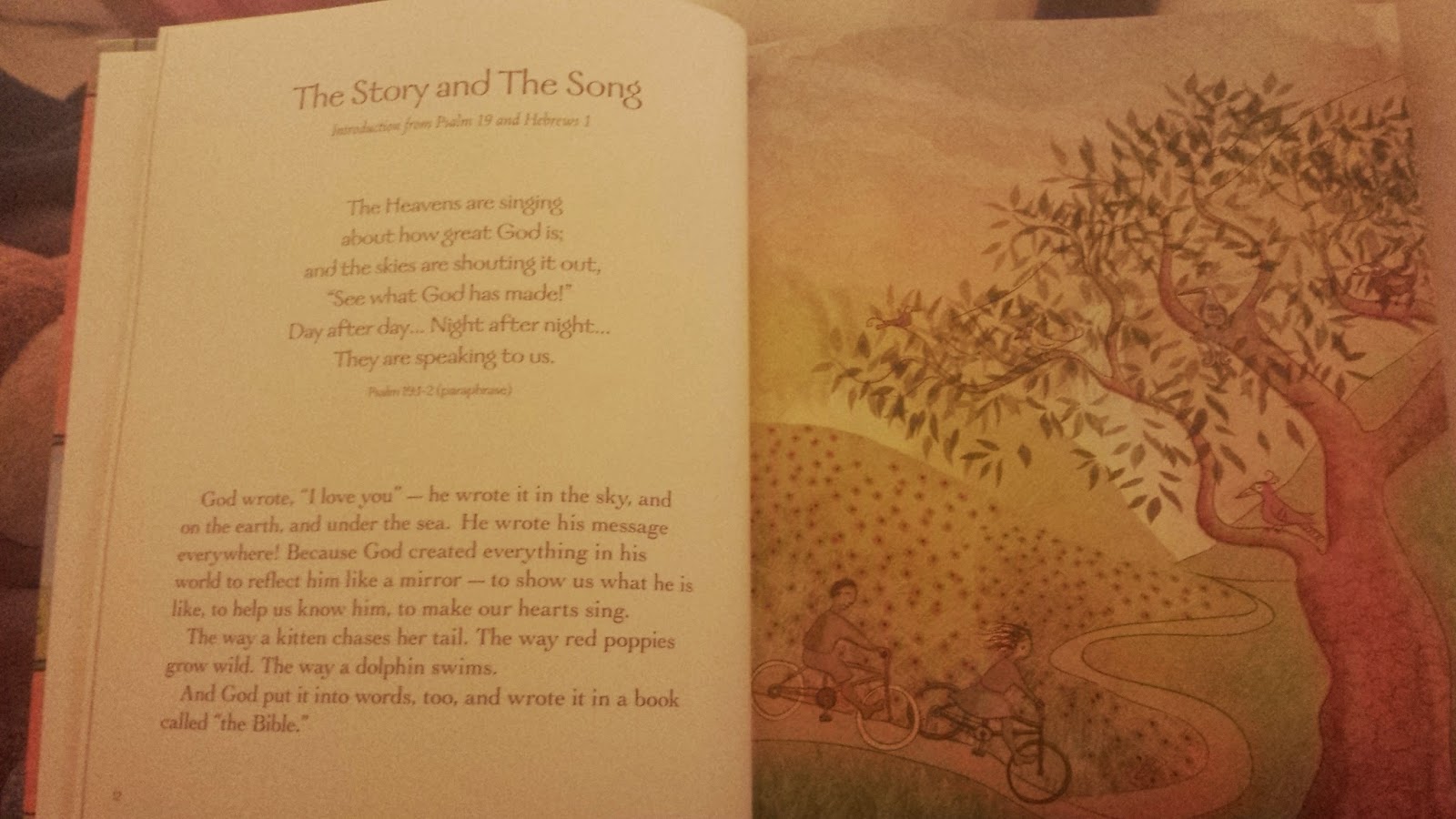 Even adults can benefit from this simplified story based bible. I loved this reading, especially the first sentence. "God wrote 'I love you' - he wrote it in the sky, and on the earth, and under the sea."
It seemed like the perfect way to end such a wonderful day, one full of God's love.
Posted by Unknown at 1:50 PM