This post is little late, but its one I wanted to share with everyone. It’s actually so late, that last night we took down all our Christmas decorations and today are putting out one very dead tree. But more on that later. It’s better to start at the beginning of our Christmas Tree adventure.

First, you must know that I am a die hard live Christmas tree fanatic. I have too many fond memories of picking out Christmas trees with my family growing up to ever retrieve the same one from the basement every year. Now, let me just say that it’s a completely personal choice and I don’t blame anyone who doesn't want the hassle of a live tree, but for me, the hassle is where some of the more memorable moments come from (Mom, you know what I am referring to!). In the yearly trek for the perfect tree, I've always thought it would be a lot of fun to cut one down ourselves. Unfortunately, I've just never had the chance. Last year in Nashville was the first year Landon was really excited about the Christmas tree. It made me even more excited (is that possible?) and I told Adam that the following year we were going to step it up a notch and cut down one ourselves. Fast forward to our move to Northern California and within our first few days here we stayed in an area called Half Moon Bay. While we driving around from the road I could see them…the Christmas tree farms! I told Adam that this was our place and we would have to come back in December to cut down a tree.
My poor, physical-labor-loathing Husband of course had no choice but to go along with it. Not a diehard like myself, I may have converted him to the love of real trees if it were not for the fact that he knows that it means he will be the one doing all hard parts while I sit back and talk about how great it is. I knew I’d be pushing him to his limits this year, but by the time Thanksgiving was over, I couldn’t wait to go get a tree and so the weekend after Thanksgiving he put on a brave face and we headed out to find the one. First things first of course, a fueling stop at one of the local donut shops. 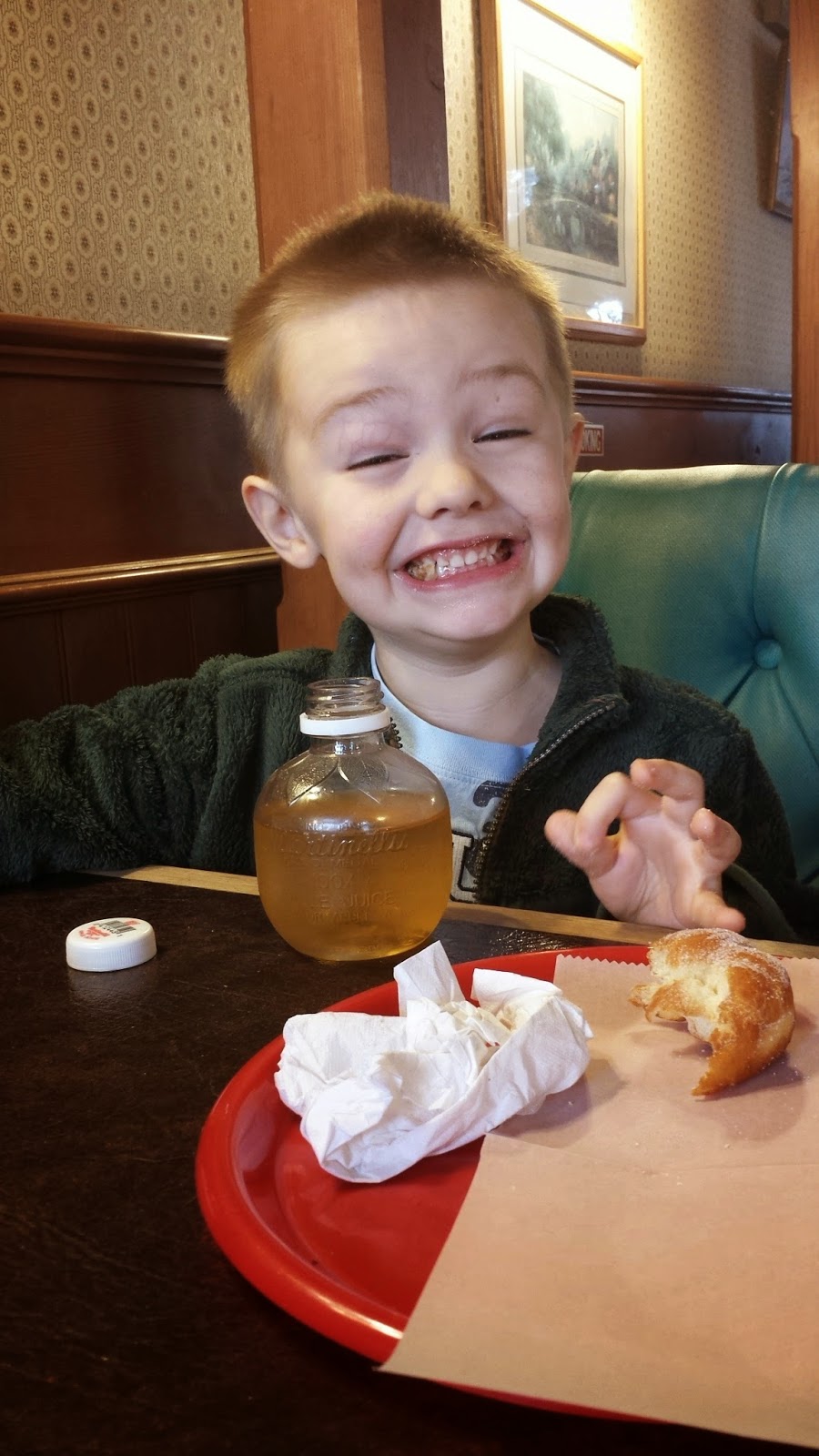 Can you tell he's excited? It could have been over the donuts or the tree ... it's hard to know.


I had done a little research before we headed out and found a farm in Half Moon Bay which was supposed to be the best for kids. I figured it would make it that much more exciting for Landon so we headed there. When we first pulled in we were asked if we were looking a tree or if we wanted to partake in the festivies. We figured we’d get the tree out of the way and circle back for the pony and train rides, jumping houses and whatever else. We made our way to the back of the farm and into the tree lot. At the entrance of the field a big sign read, "All Trees $29.99". Wow! What an awesome deal! But as we walked through the field we began to see why. 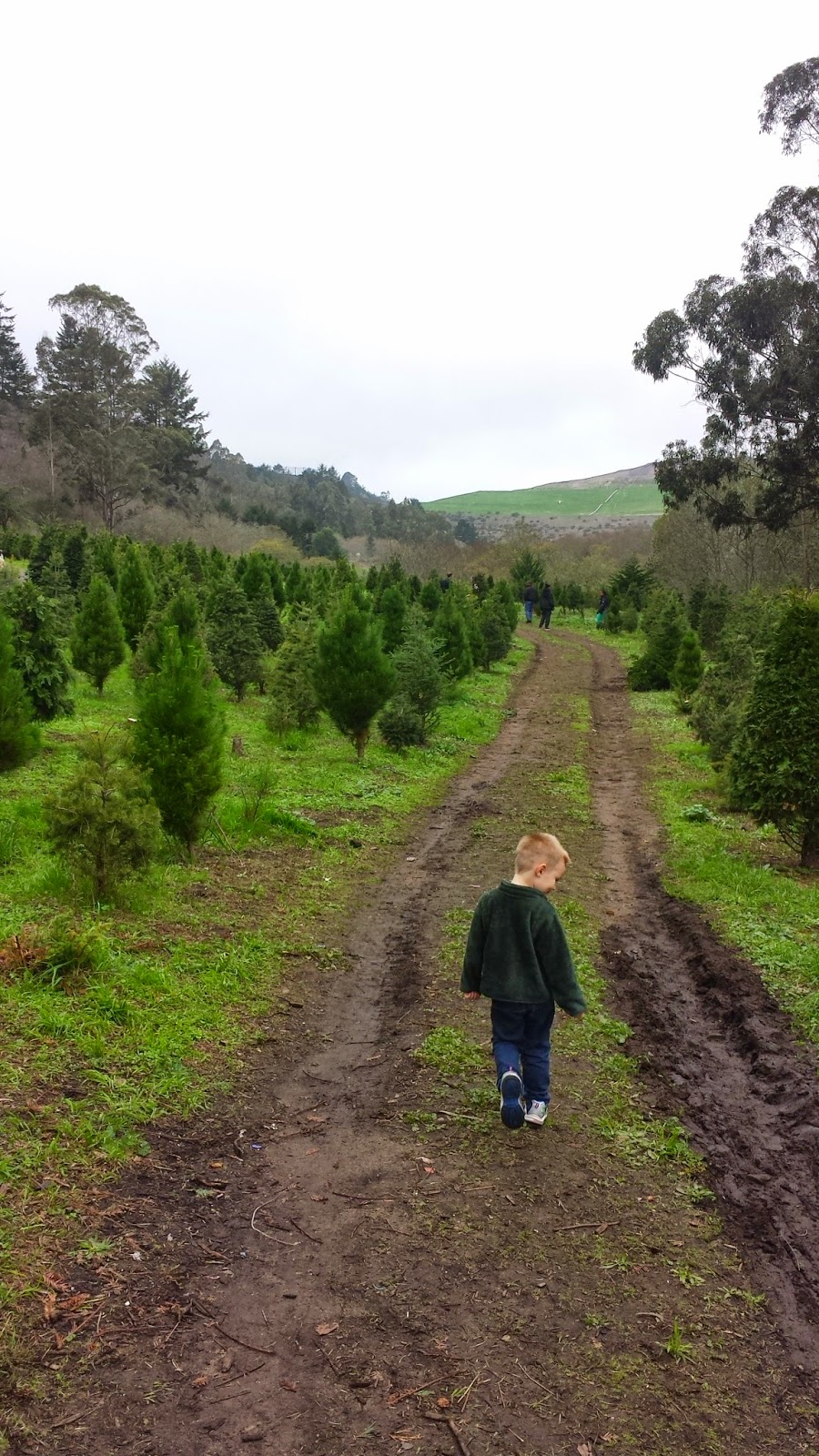 They had hundreds of trees, but not a single one appealed to any of us. They were either too small, or not very full or just dead. We walked all the way to the back of the field, turned around and walked back without even seeing one we would consider. As we headed back to he car we tried to explain to Landon that this place wasn’t  the right place, but we would try another farm. Of course to him, we weren’t getting a tree and I tried to keep him excited even when I was a little worried myself.

We loaded back into the car and I pulled up my phone and found another tree farm called Santa’s Tree Farm just down the road that looked to be less kid centered and more tree centered. As soon as we pulled into their lot, we knew we had come to the right place. The elves handed us a saw and a map with directions to the various sections with all kinds of varieties of trees. 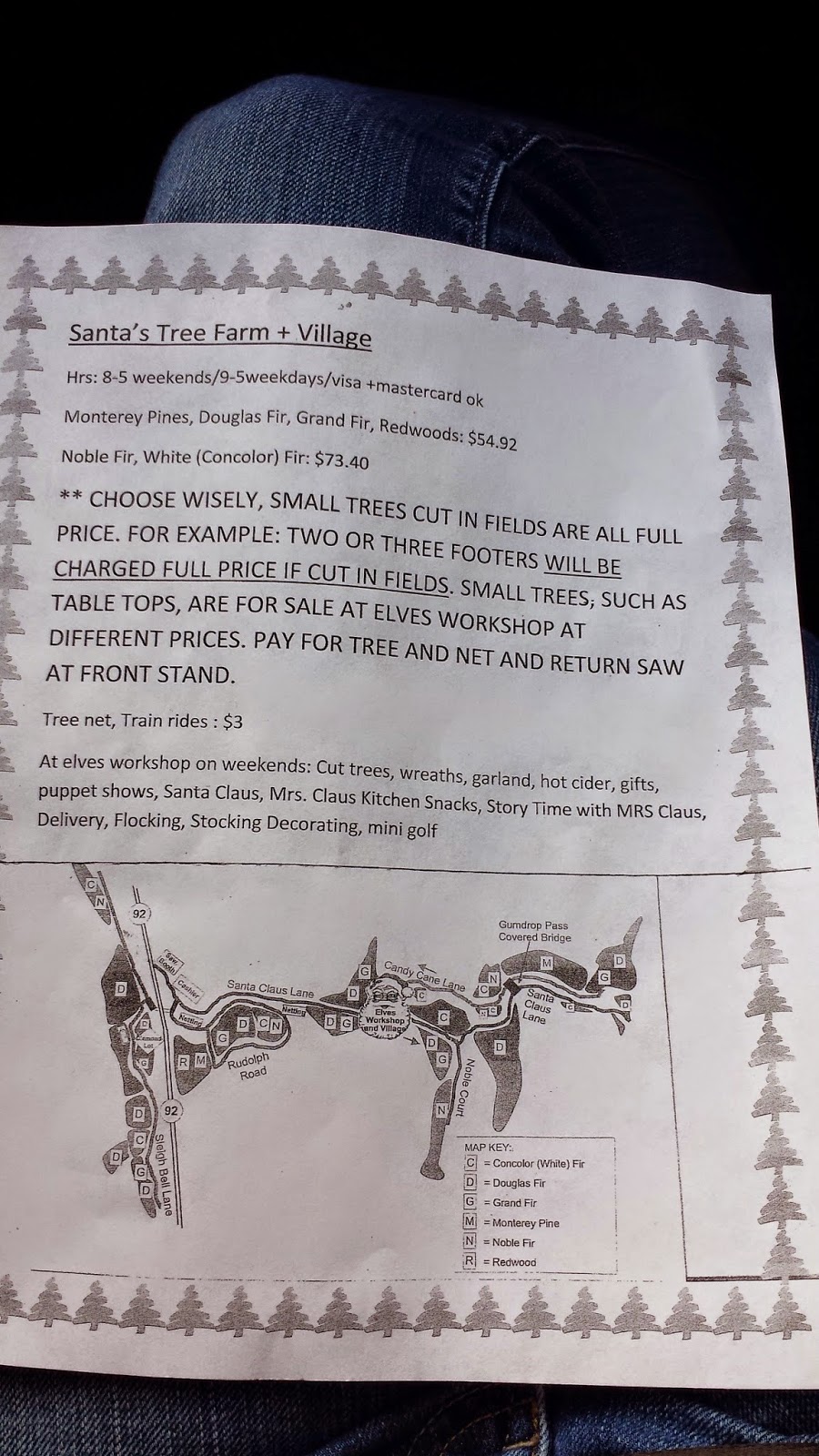 The prices may have been almost double, but at $55 for any size tree, it was still a lot less than we were used to paying and we could tell immediately that finding the tree wouldn’t be a problem here. Initially, we decided go to a Douglas fir section. We found one and walked around it seeing a number of nice trees, but nothing that seemed just right. Adam suggested we drive around to the other pathches and see if we like a different type maybe more. As we drove around, he pointed out that we should check out the redwoods. Given our new found love of them it seemed somewhat fitting that our first tree in California be a redwood. We found the redwood section and immediately knew that a redwood was our tree. 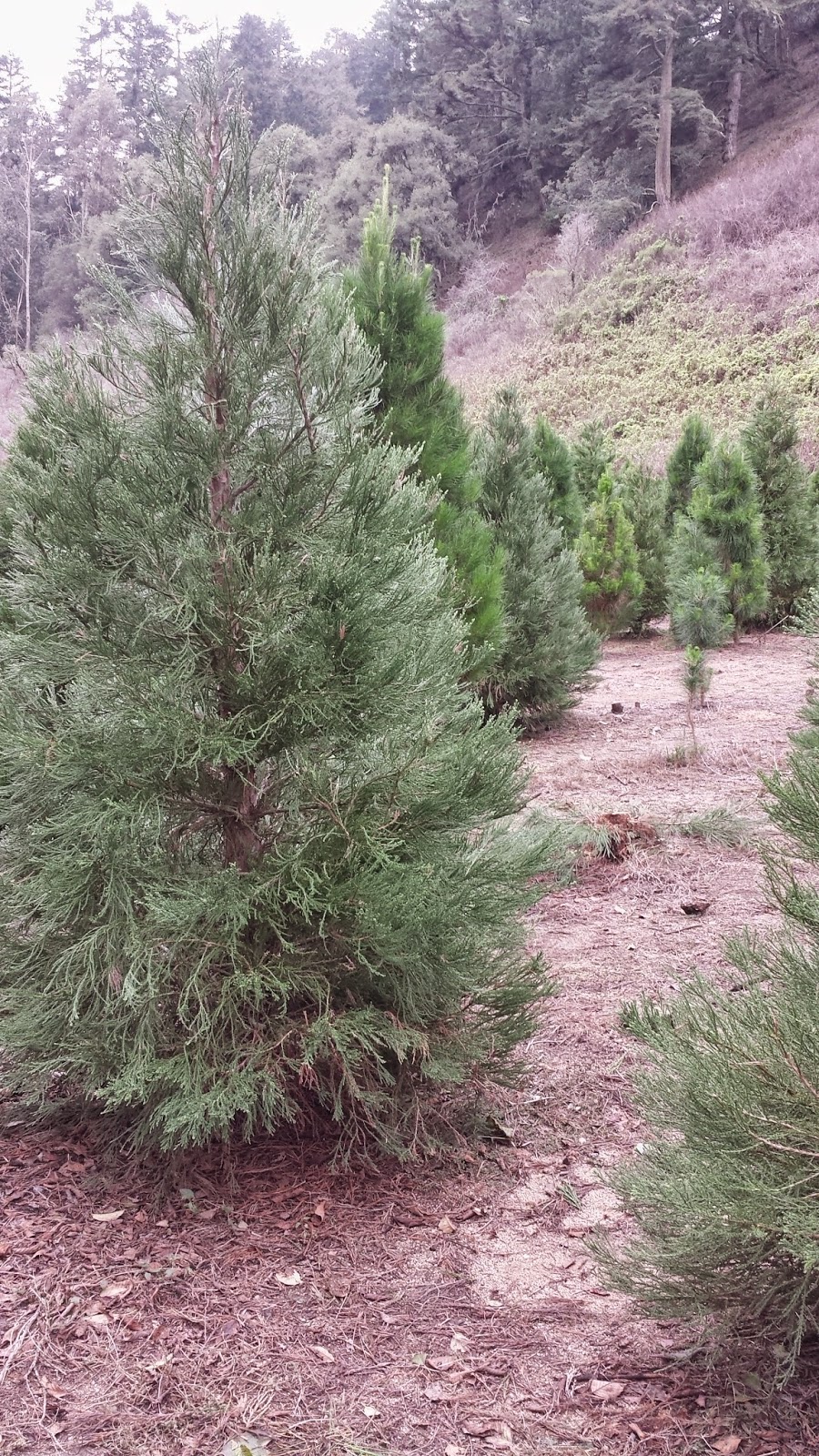 We loved the look of the branches which seemed flair out in a fan. The shape was nice and full and yet almost fluffy looking for a tree. The color was a bright green that looked almost electrified. 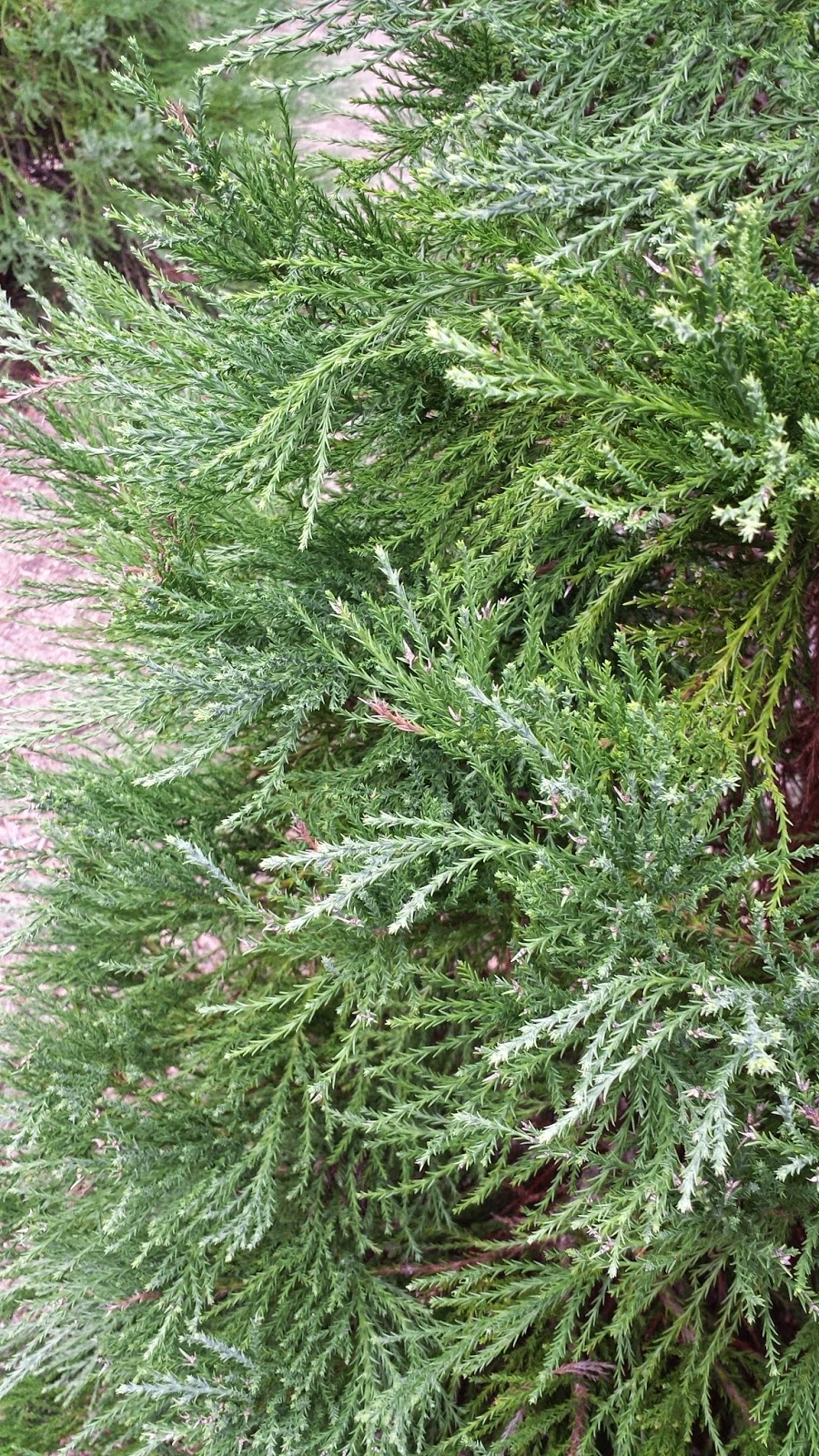 But if the name and the look were not enough, it was the discovery of the little baby pinecones so distinct on redwoods that really made our hearts swell. 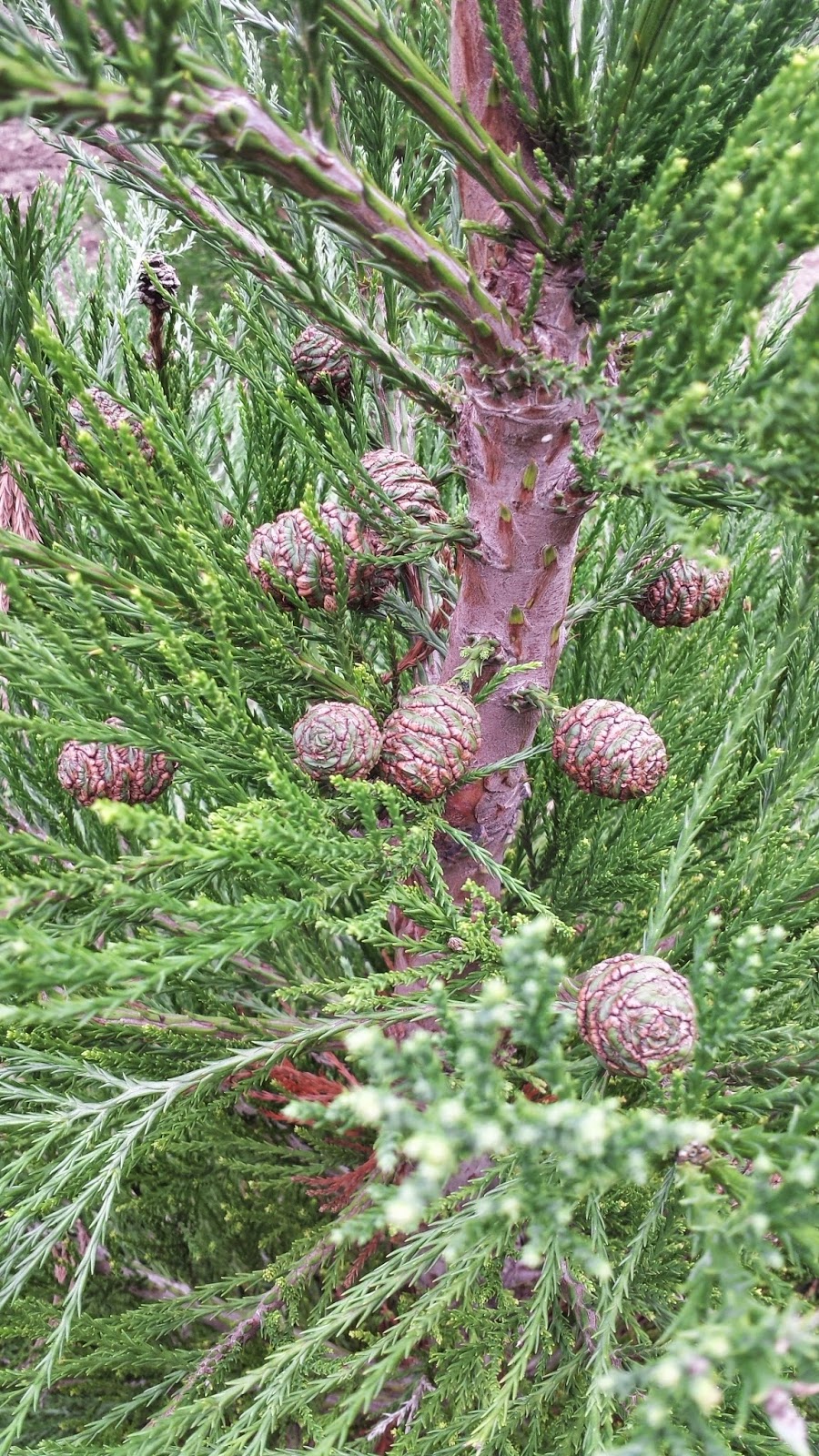 We walked around the redwood section full of so many perfect trees trying to pick out the best of the best. I, of course, was constantly drawn to the oversized ones, but Adam kept my head on right and after walking the area for a bit we finally settled on the perfect tree. This is where the fun started for Adam who got to lay on the ground and use those arm muscles while I gleefully waited for it to tip over. 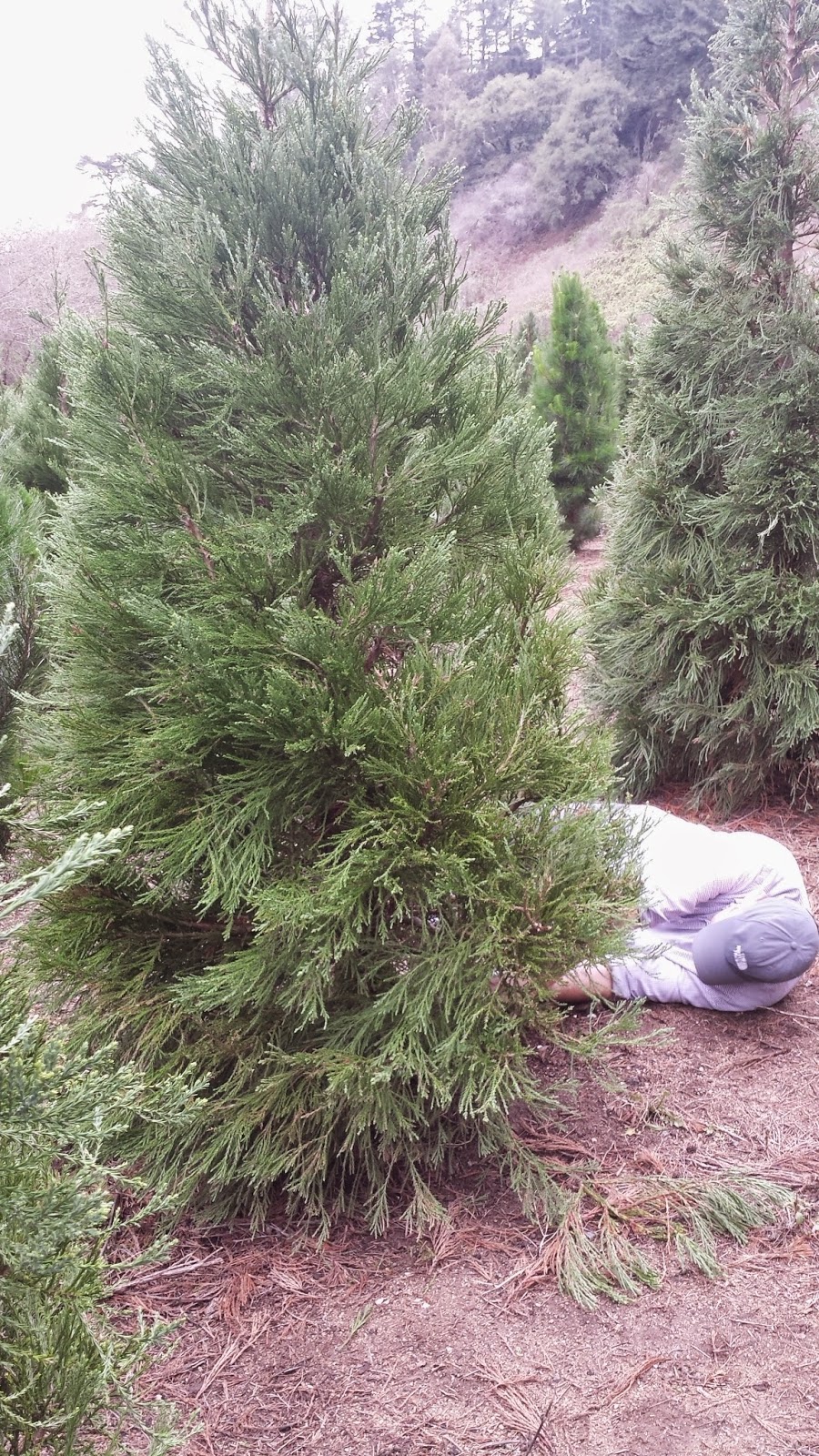 Landon pulled second duty making sure the stump was nice and flat while trying to figure out just how the saw worked. 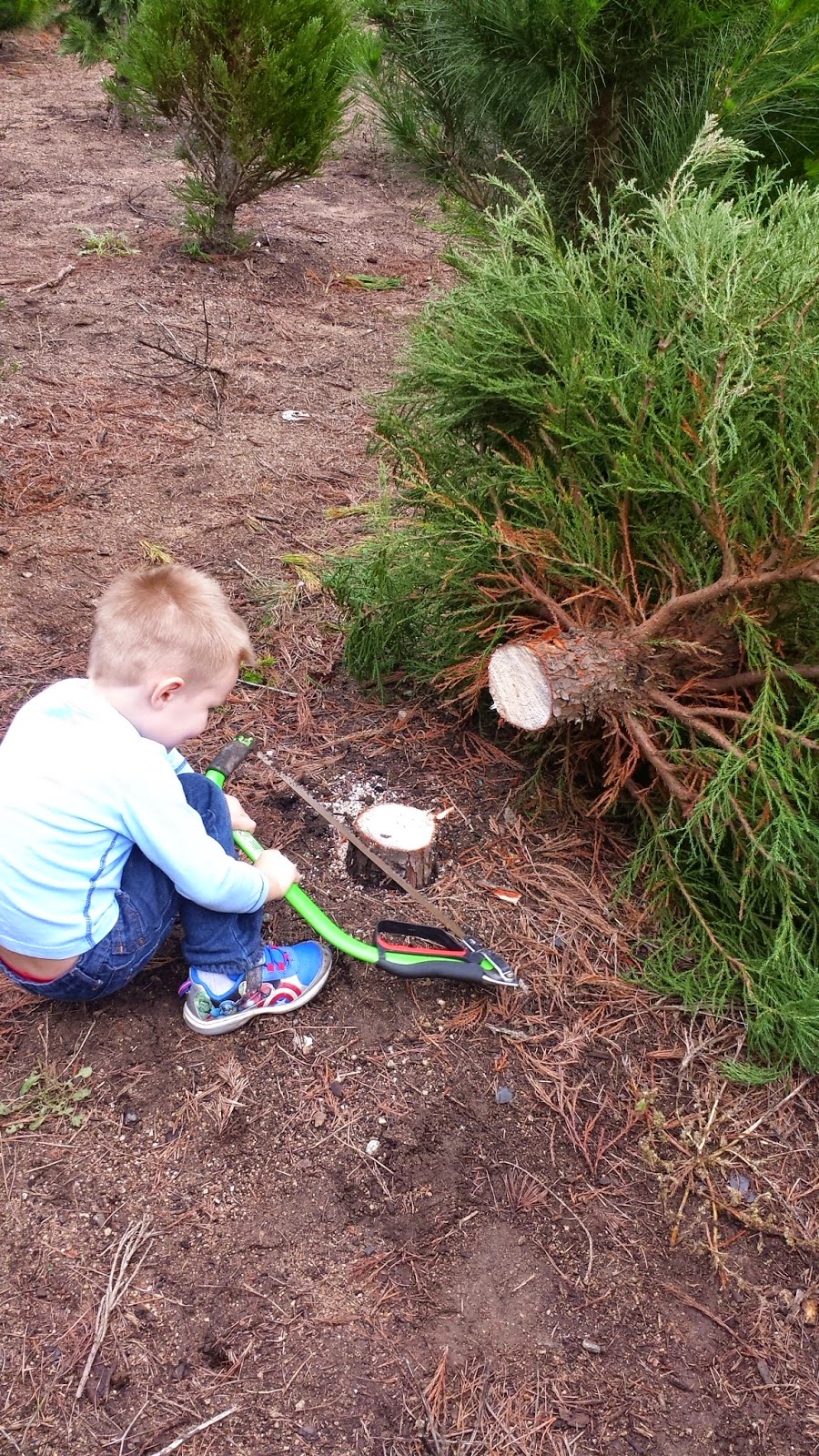 And there is was, our first u-cut Redwood Tree. 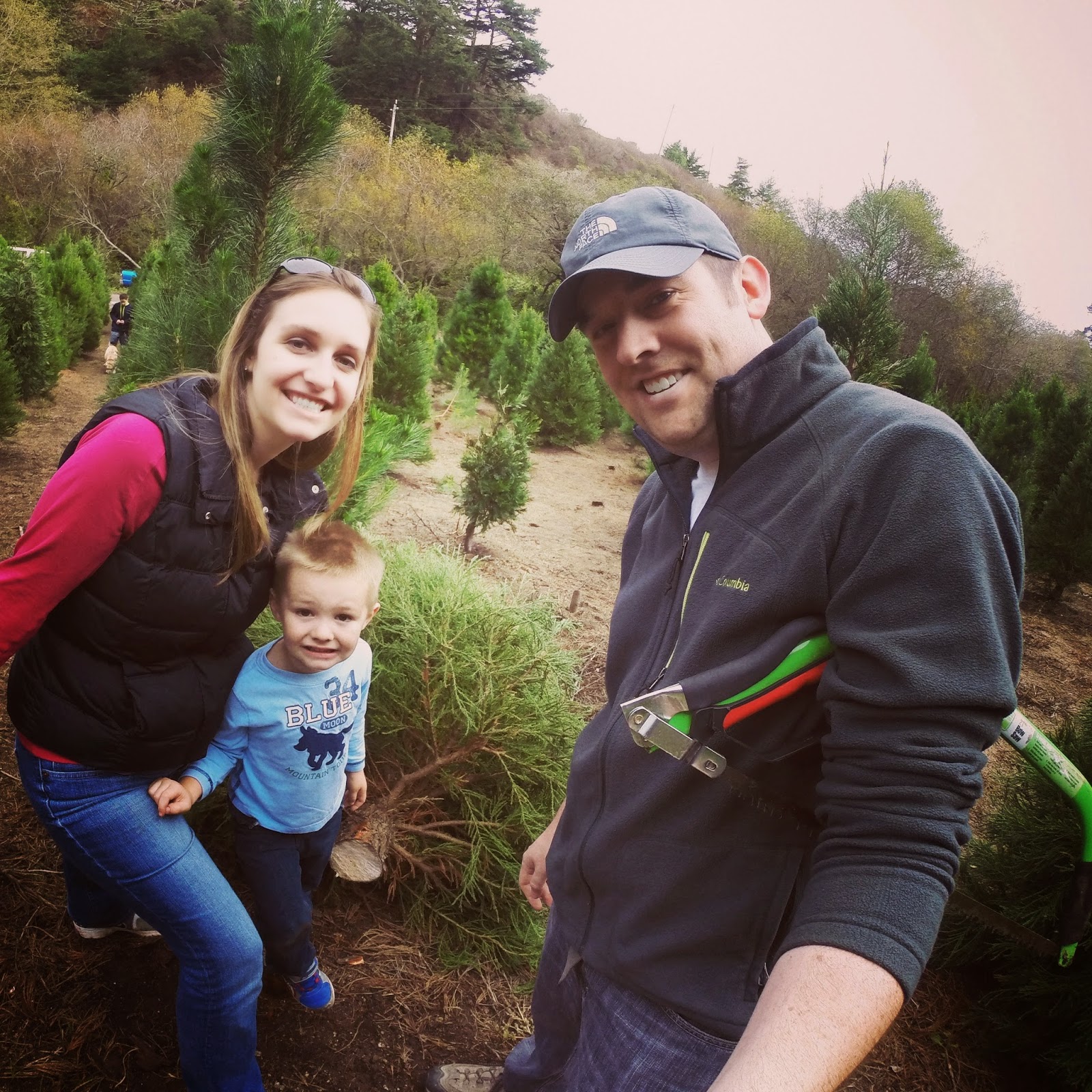 Once we could see the stump there was no denying the redwood bark and tint. 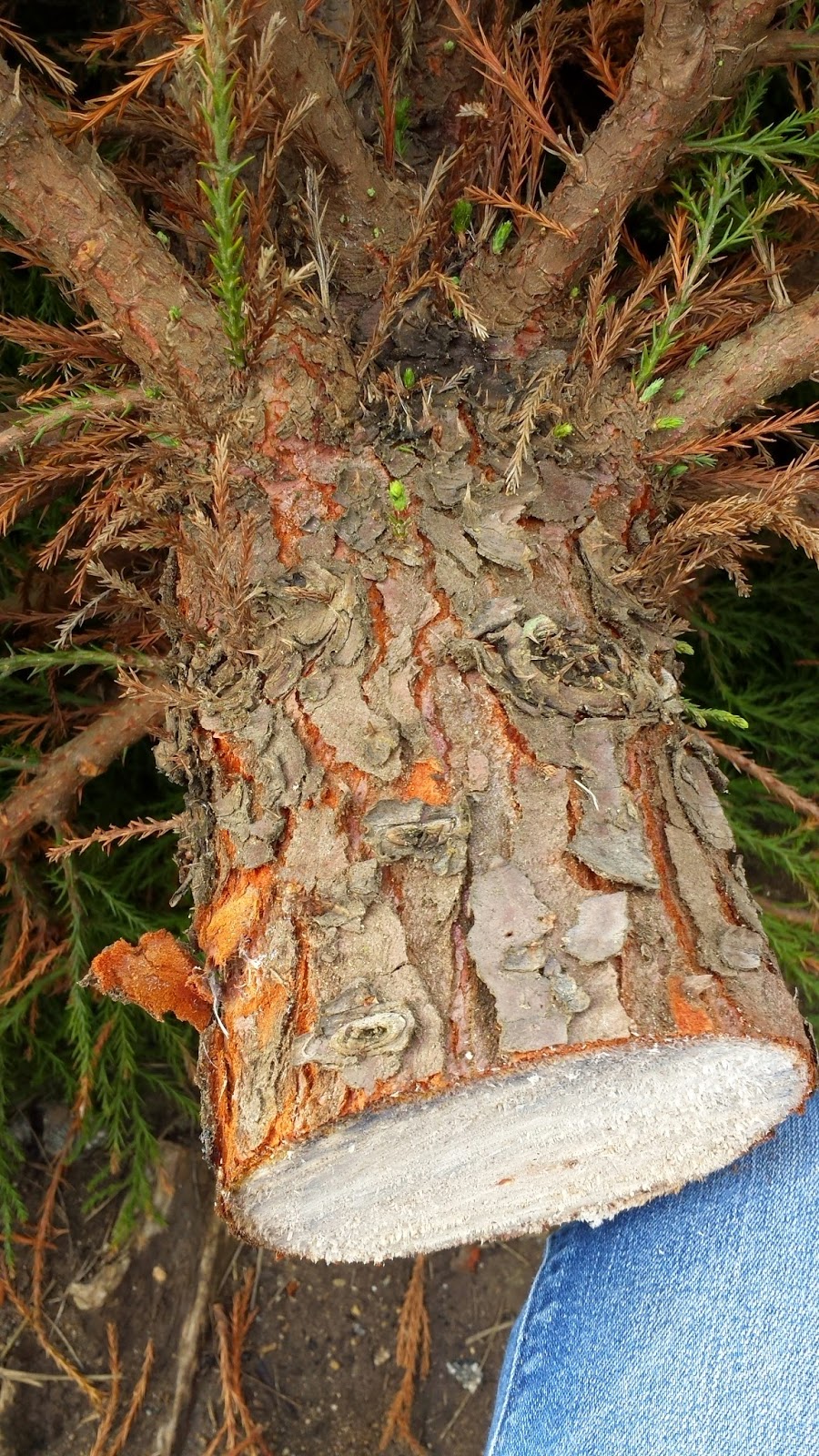 With me happy as a lark, Adam loaded it up on the car and we headed home with our prize. When we got home it was just a nap, some finagling into our stand, a lost battle with our red lights, and a trip to the madness of the the light aisles at Target until our white and NEW red lights were on and we were ready to start decorating.

Can I just say, thank god I've bought 97% non-breakable bulbs over the years. Landon had a blast decorating the tree, but for every single bulb he actually got to hang on a branch, he probably dropped it about three times. 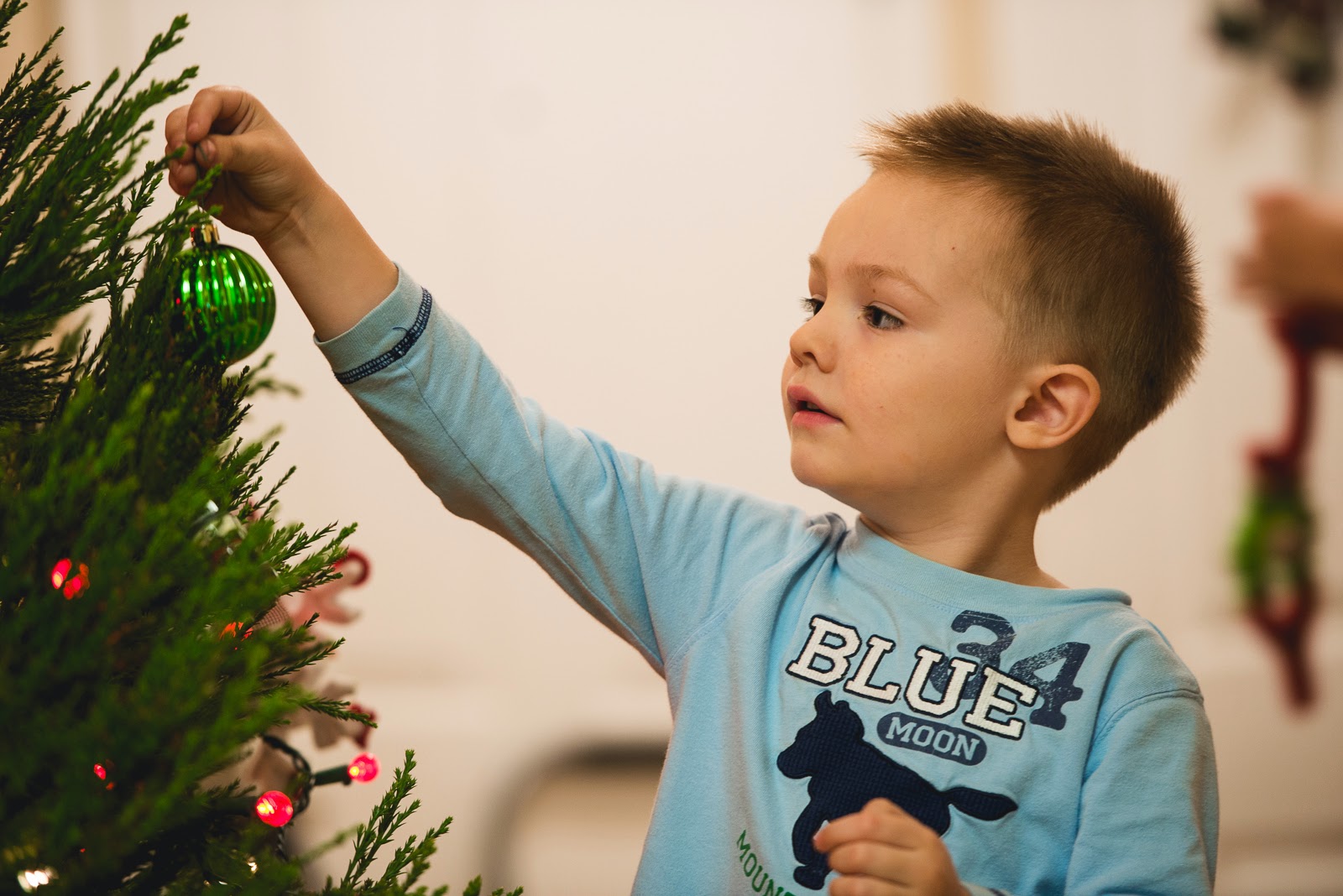 But it didn't matter, There is no way decorating a tree with a small child would be enjoyable if you had to worry about the bulbs falling and breaking. 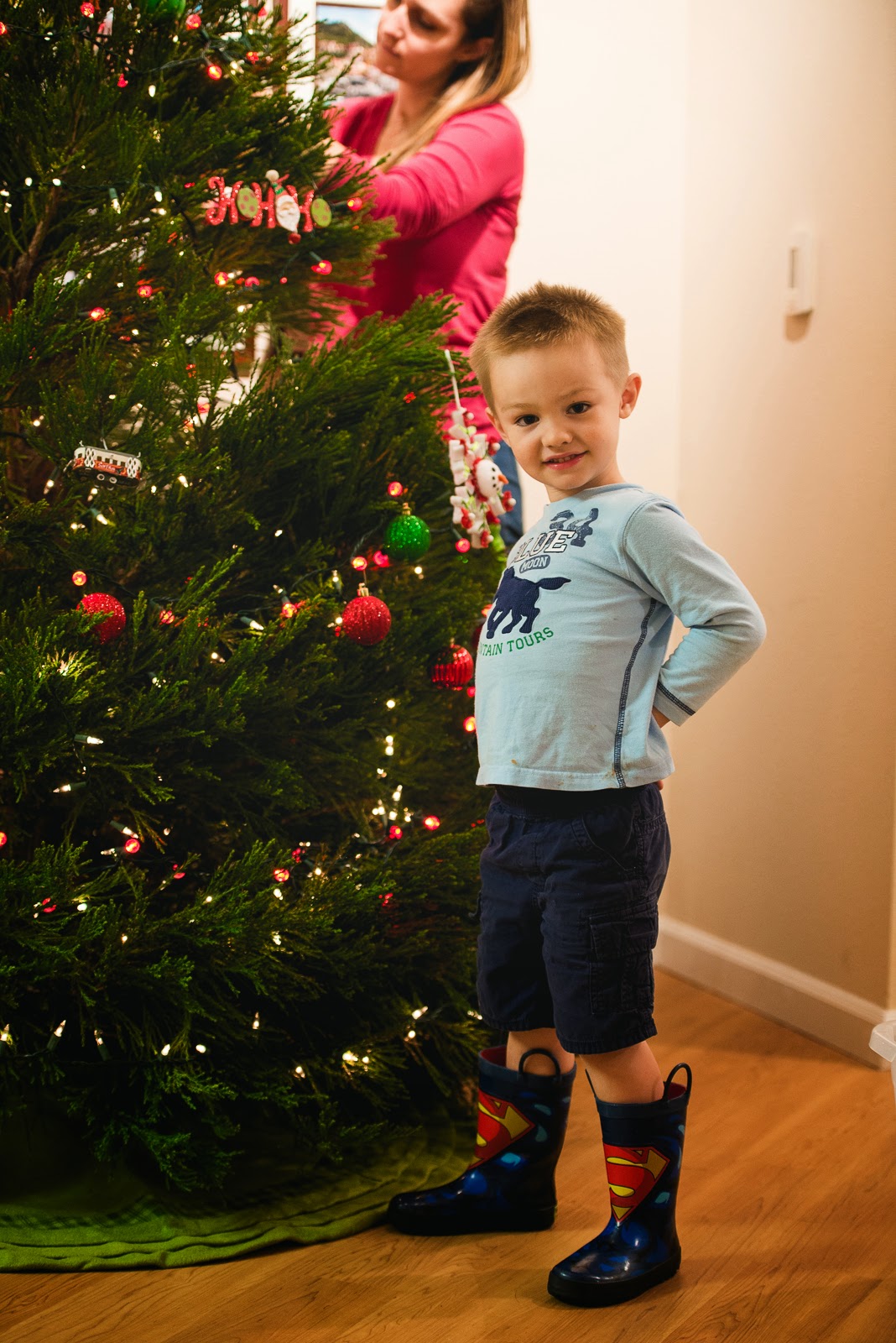 As much as I enjoy decorating the tree, I now get even more joy watching my Son enjoy it. 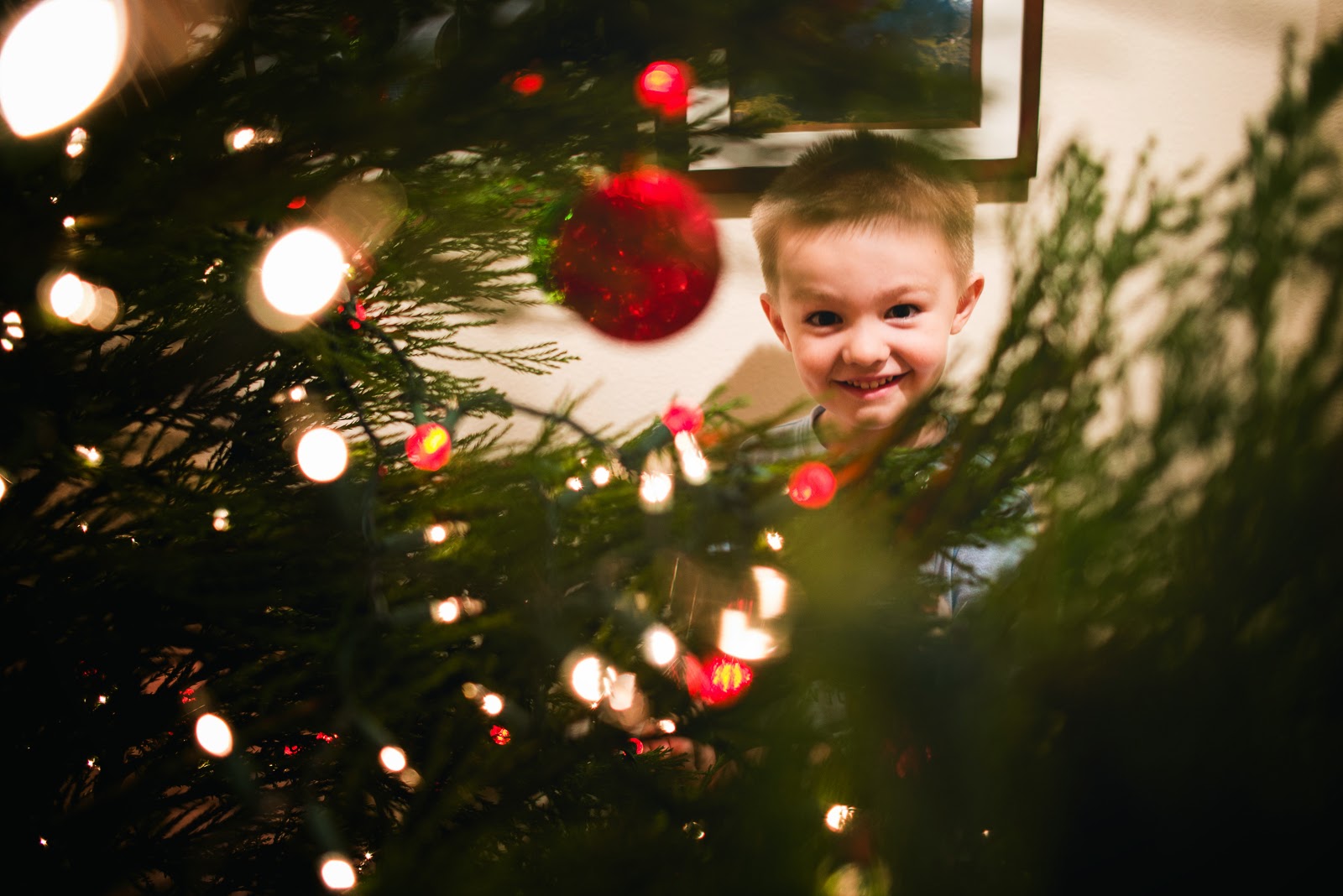 Eventually, there was no more room left on the tree so we turned to decorating Landon instead. 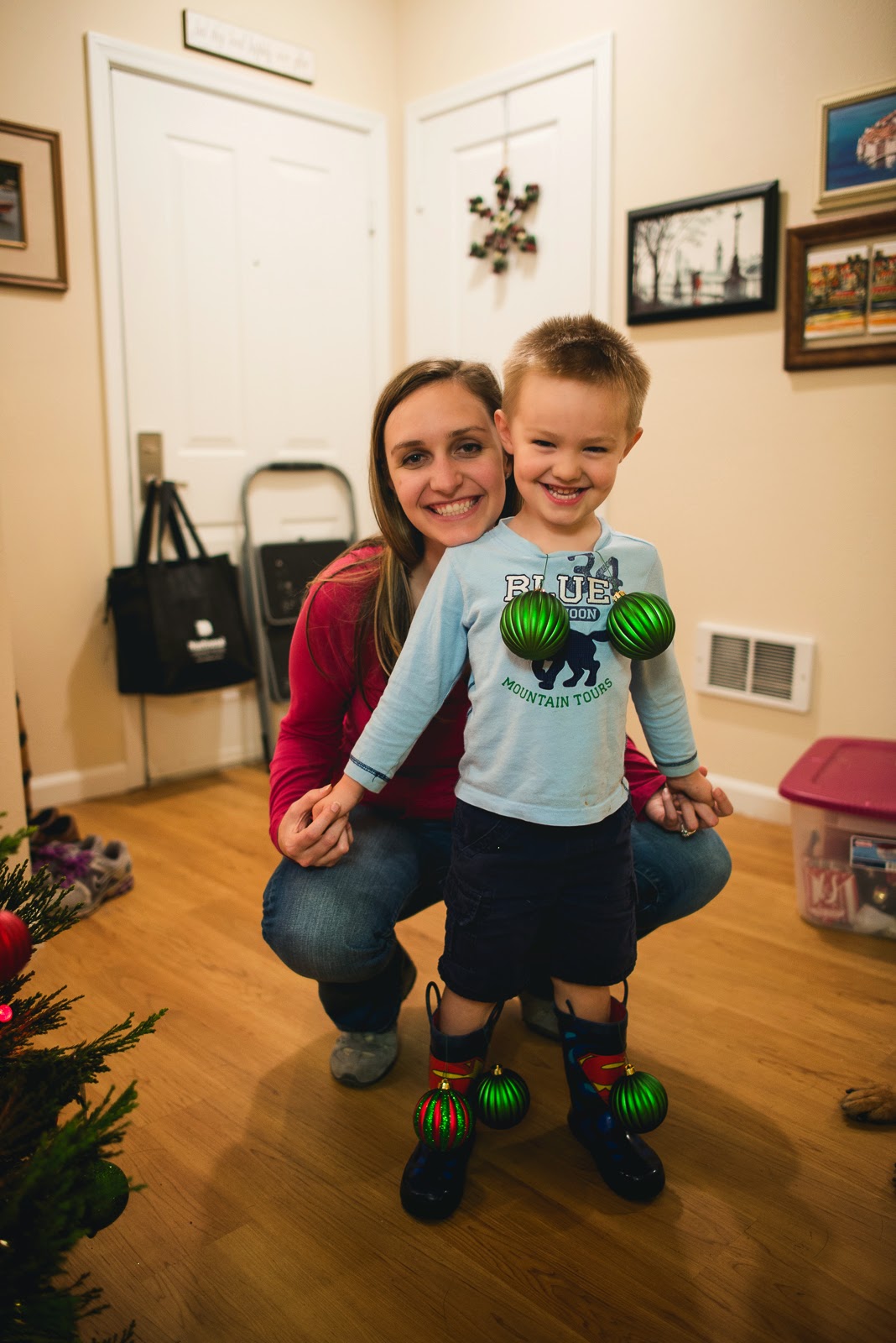 I wish Adam had gotten a good picture of the finished tree, but we didn't. Needless to say, it was a beauty! But, as I mentioned at the beginning, the tree was put into the compost pile today. We noticed a few days before Christmas it was dead. Not just dry, but dead. It had lost the lush green color and was becoming brown. We think there were a few days in the beginning that it drank all the water really quickly and dried up. It’s our fault no doubt and I usually try to keep up the tree until the Epiphany (Jan 6th) so I was pretty sad to have to take it down so early this year. We didn’t even bother taking a family photo next to the tree. In fact, this is the only one I got with Landon Christmas morning next to it right before he opened his gifts. 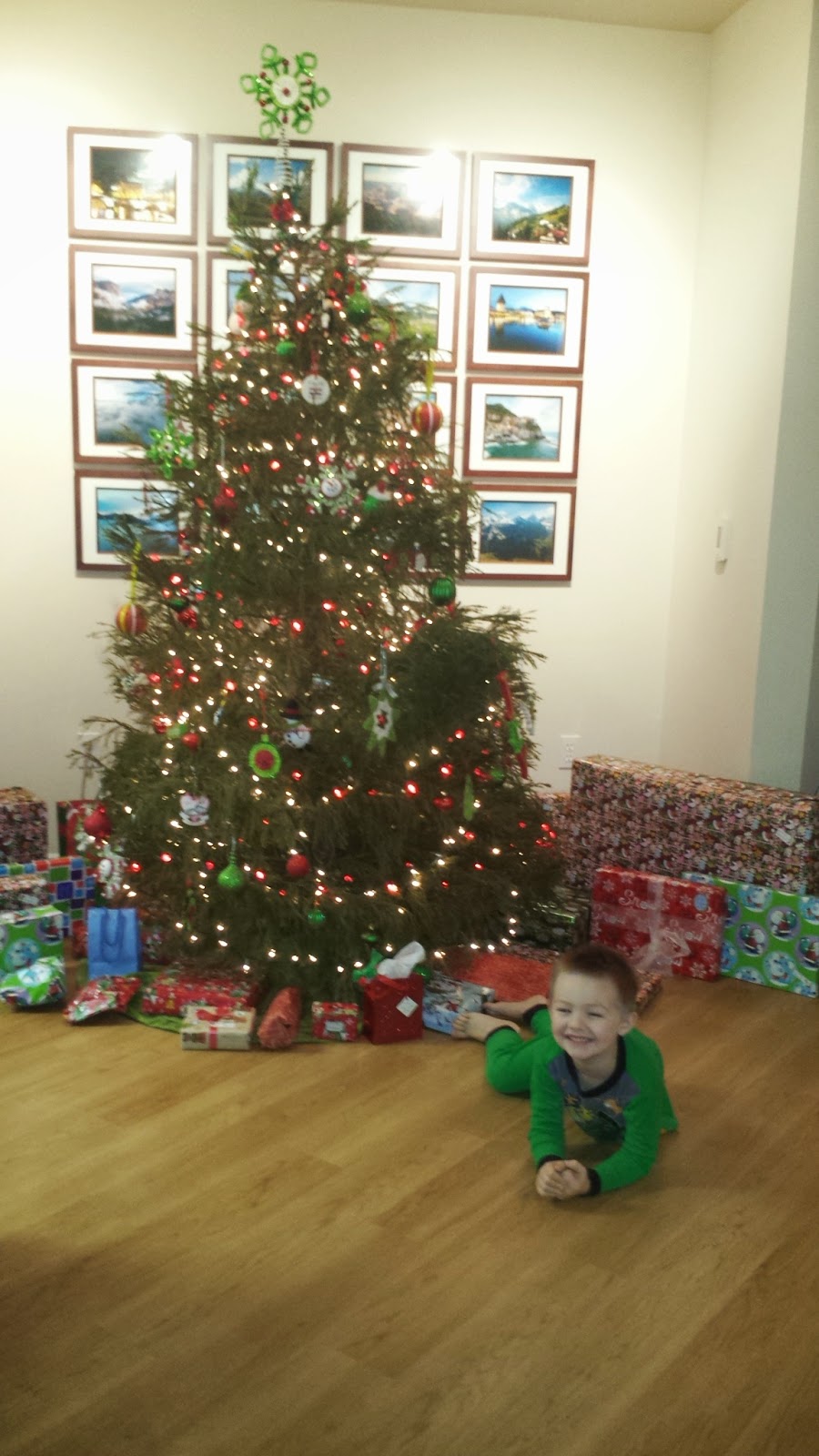 On the bright side, we found as we were bringing it home, that the Redwood doesn't shed its needles like the Douglas firs or many other trees. It does however, have tiny little thorns at the end of the finger like branches. As Landon was decorating the tree, he would constantly say “Ouch, the tree bit me”. It didn't hurt much, it felt more like little pricks and it didn't stop him from continuing to joyfully add ornament after ornament. But, I will admit my hands were covered in red spots for three days after we moved and decorated it. Next time I might have to pull out some gloves.

With the good and the bad, it was still a lot of fun for me us. From our first time cutting down a tree to the enjoyment of having a redwood in our house. Landon even took on the task of official tree lighter whenever we would come home or wake up. He also put himself in charge of putting any ornaments back on the tree that’s Kaiser’s tail may have knocked off. He did this, while simultaneously scolding Kaiser for his carelessness of his beloved Christmas tree. In the end, we  ALL enjoyed our little Redwood tree and I for one look forward to doing it again next year.

We took video at the tree farm and a short time lapse while we were decorating the tree. Unfortunately, our memory card was already pretty full so we weren't able to capture it all. Here's a glimpse of the whole process.