It seems ironic, but I am so grateful that we live in a tiny apartment, because it motivates us to get out and do things on the weekends. Of course it helps that we live in a place with great weather and endless things to do. For me, there is no better feeling than breaking out of the house, away from the TV and computers and spending quality time together as a family. The more we get out and do things together, the more we bond, learn together, and laugh. Home is where I clean and cook, where Landon plays with his toys and watches movies, and where Adam gets on the computer or does work. It isn't that we don't spend any time together, but everyone kind of has their own stuff and does their own thing. It seems like the more out of our comfort zone we get, the closer we become and so we always make a point to get out on the weekends and do something together as a family.

This weekend was no exception. Saturday, I had an eye doctor appointment in the morning so we got off to a little bit of a late start, but we still managed to have a full day. Since our first trip to Golden Gate Park on Thanksgiving, we've been wanting to go back and take a boat on Stow Lake. When I got out Saturday for my appointment I could tell it was going to be a beautiful day so once I was done, I picked up some picnic foods from Trader Joe's (literally 50 feet from our house) and we headed off to spend the day at the park. We decided to hit up the lake first and it was quite the debate as to whether we should rent a row boat or a paddleboat. I was all about the row boat, Adam said the paddleboat so we could all face the same direction, and Landon, well he wanted everything. Guess which won out… 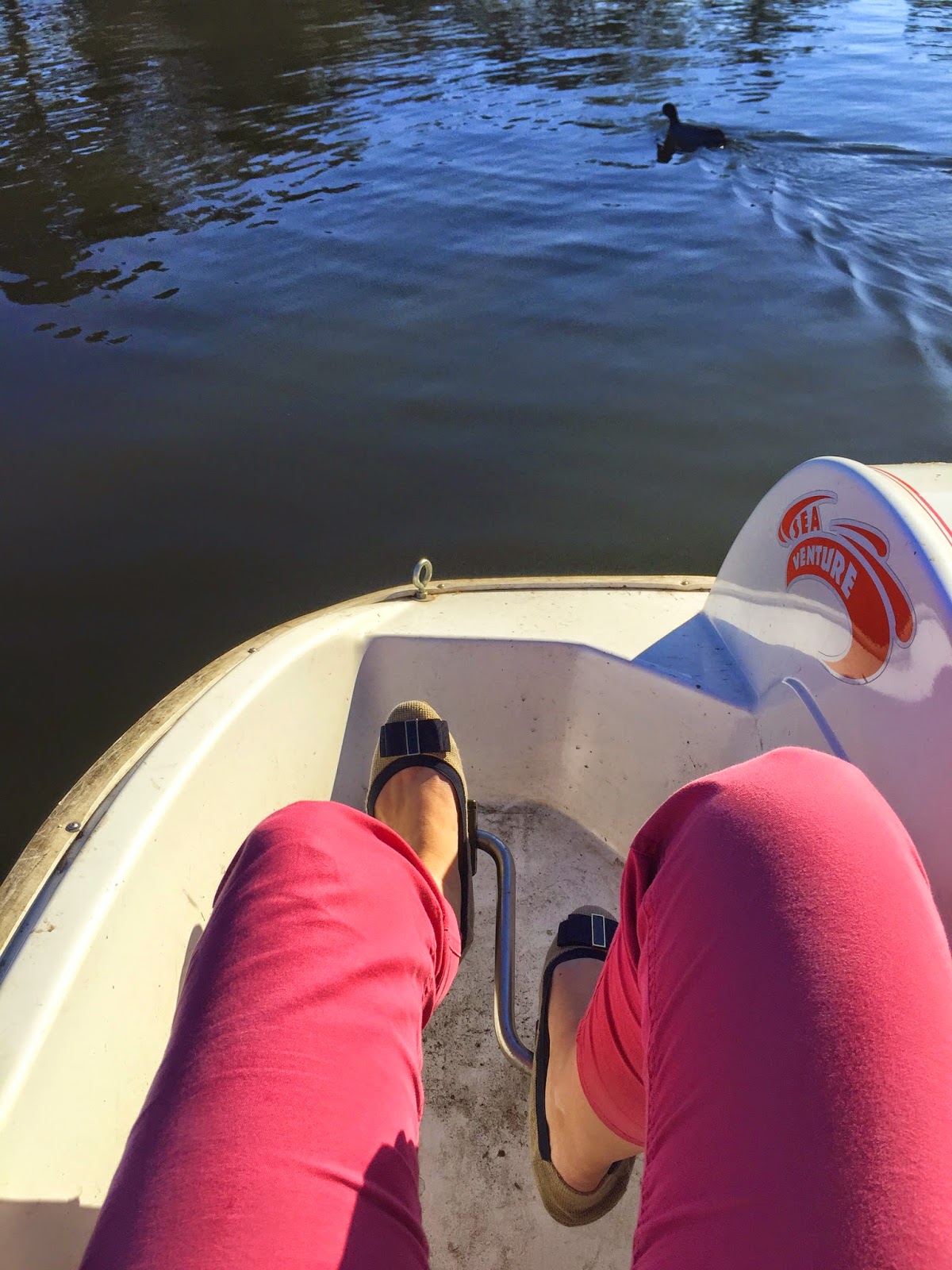 Stow Lake is a small circular man-made lake within Golden Gate park. It is easy to stroll around either by foot or boat. Poor Landon was a little worried at first that we would sink. It is so funny how he is afraid of certain small things while totally brushing off others. 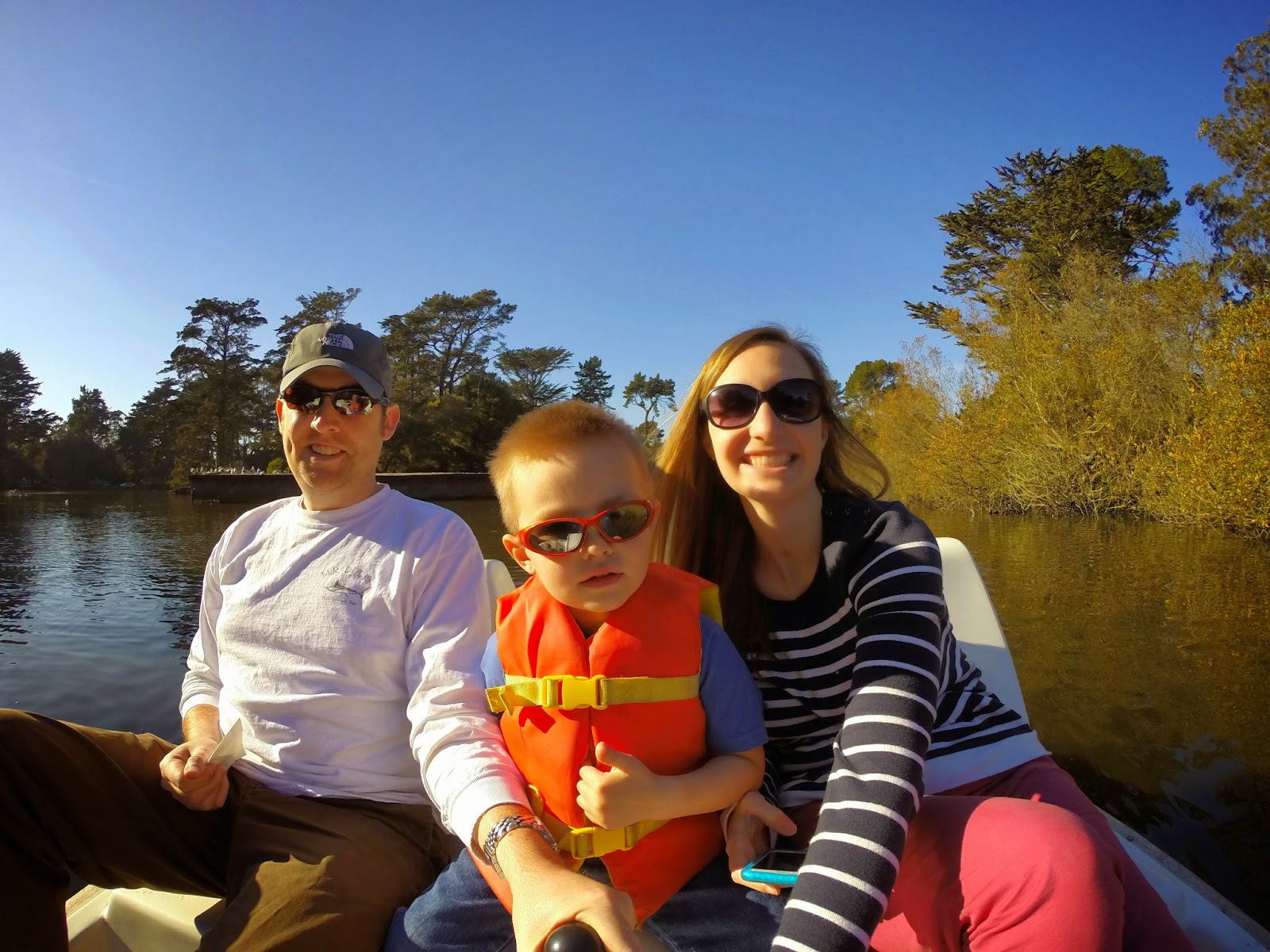 He was able to sit in the middle right next to the steering stick so you can imagine what he wanted to do. He has learned his left and right and knows them very well, but it is very confusing for a kid when the boat had to be steered in the opposite direction that you want it to go. We eventually had to tell him to listen to us say “left” or “right” and ignore the way he thought it should be. After awhile, he was able to catch on pretty well.

Stow Lake has a number of neat features. There is a large waterfall... 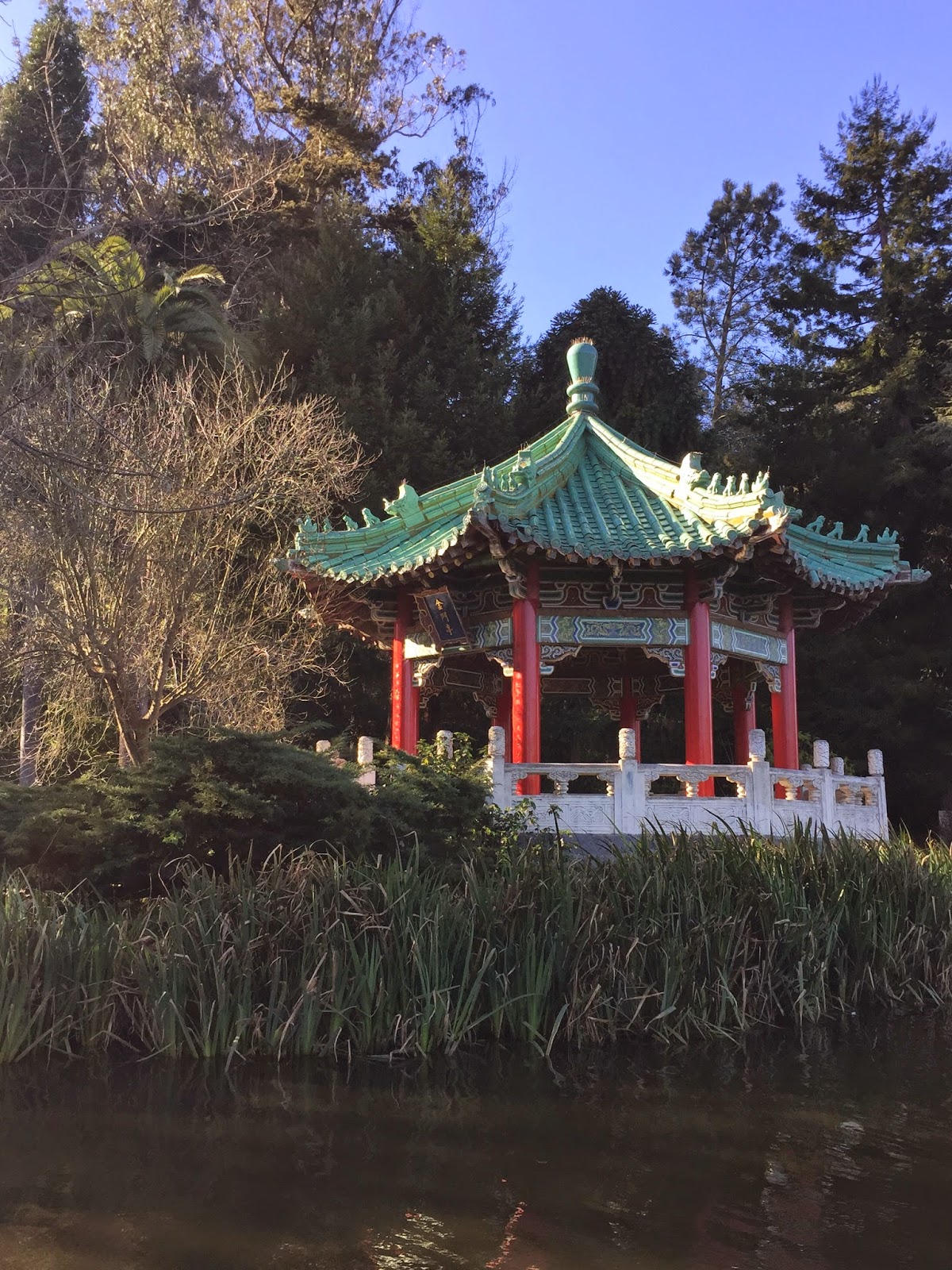 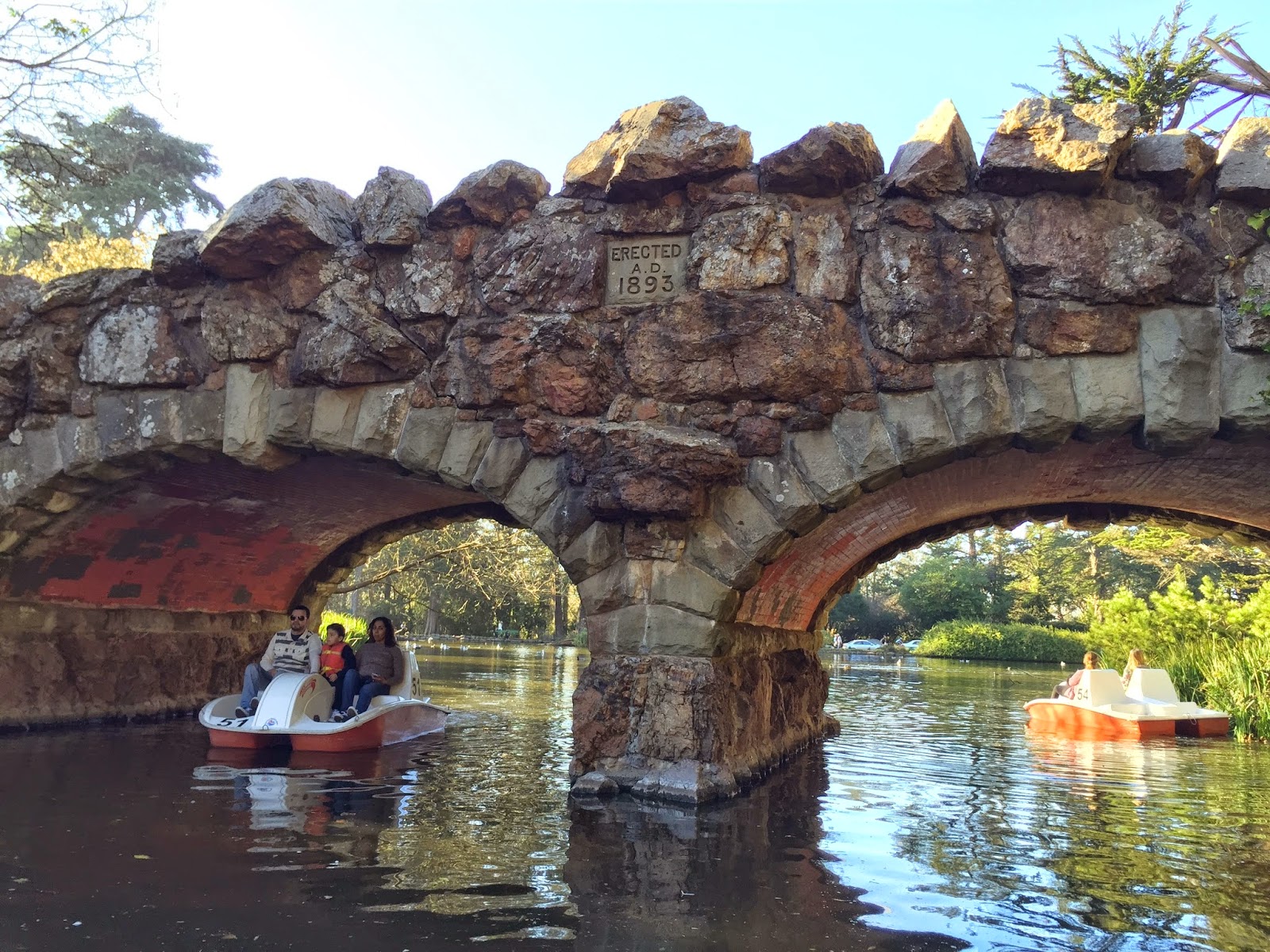 For $25 plus a $5 deposit you can rent the paddleboat. The row boat is a little less at $20. There are even electric paddleboats for anyone who doesn’t want to do any work. Rentals are by the hour and if you kept moving along the lake you could do two laps around in that time. We took our time and even back paddled through a few spots so we only did one lap. The paddleboats only have one speed and it doesn’t require much work to make it move, just a slow and steady cycle on the pedals. 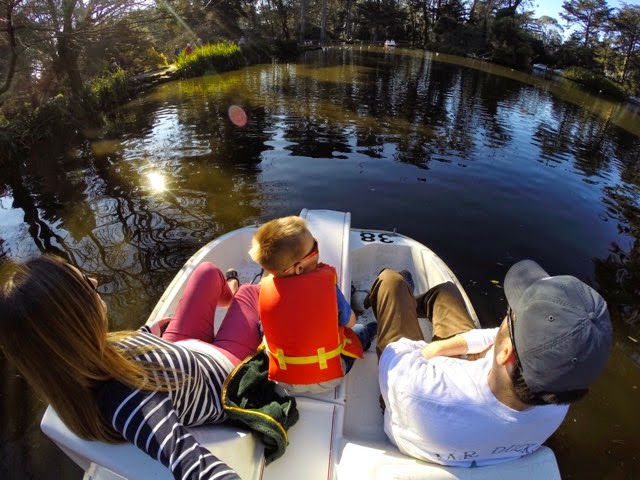 Many people walk around the lake and feed the ducks so you can imagine they’ve all told their friends and there is quite a large number of ducks all across the lake. From mallards, geese, seagulls, and a number of other varieties. We even witnessed a cormorant catch and swallow a fish whole! We also spotted these cute little turtles sunning on a rock. 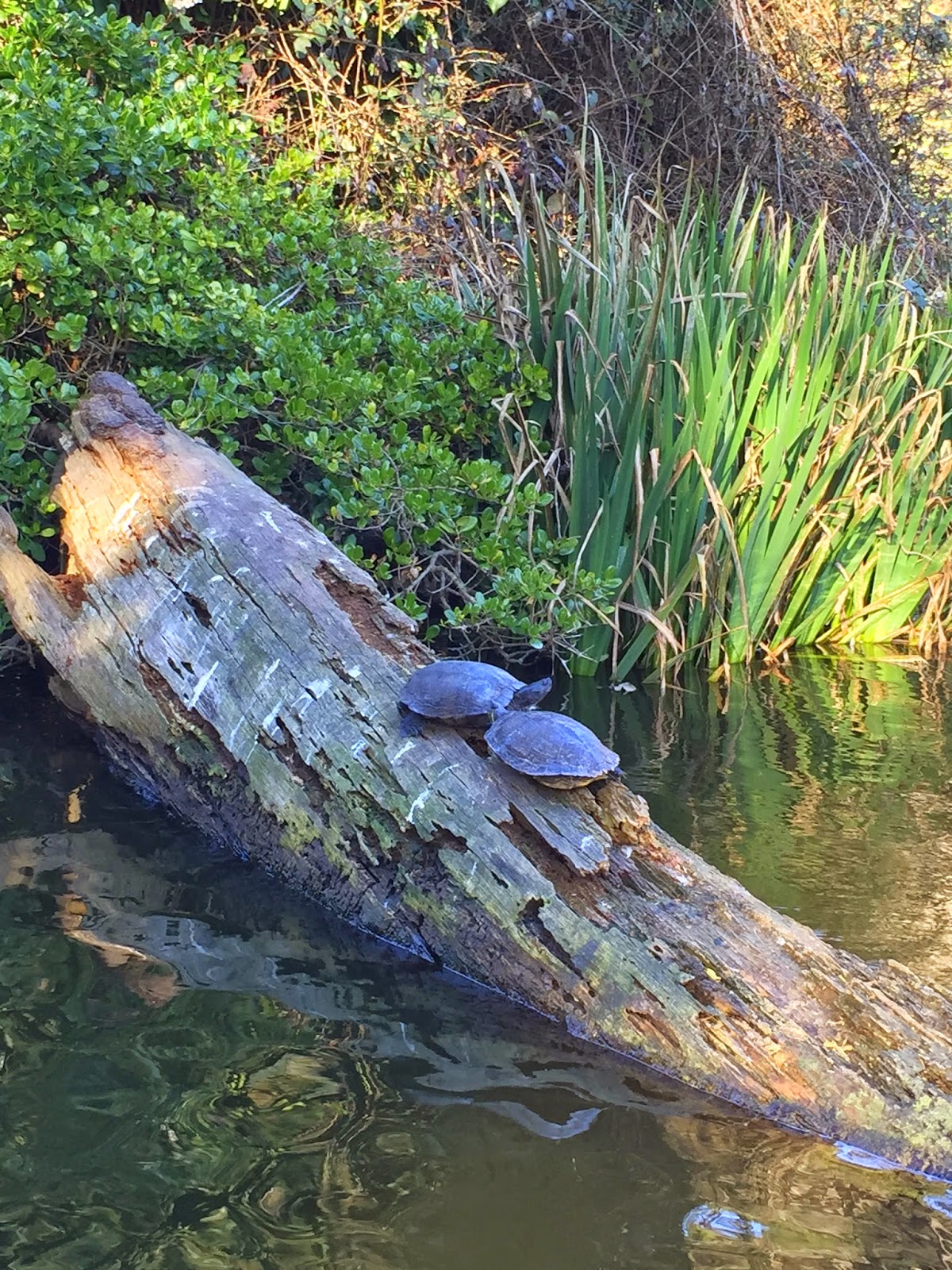 After our quick tour of the lake, we headed over to the nearby playground for a picnic and some play time. San Francisco is the perfect picnic city and I enjoy nothing more than having a picnic with my family. Landon played on the playground for a bit and then we played together as a family trying out his new baseball glove, quickly switching to Frisbee, then to soccer, and lastly to batting. We’ve started quite the collection of outdoor toys, but we realized we needed to re-think our baseball approach. The family next to us had a good idea using a beach ball for the baseball and it wasn’t long until their boys, Landon, and the Dad’s had teamed up to play a game. It was pretty adorable. 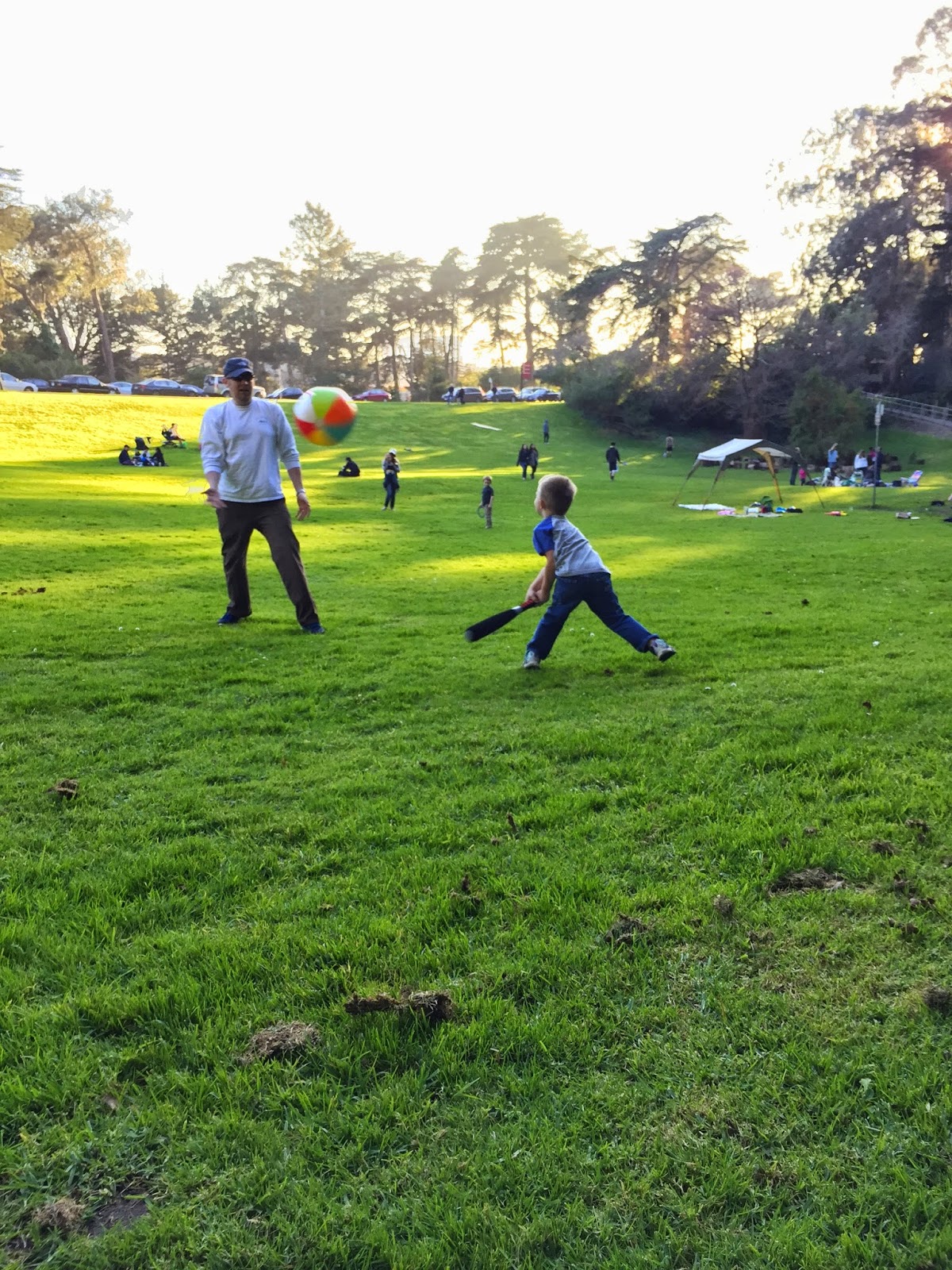 We stayed in the park until the sun was behind the trees. In San Francisco, sunshine equals warm weather and everything else is cold. We decided to head over to a nearby REI so I could check out some new running shoes. Our route took us right past something I’ve been wanting to see, the painted ladies! And I couldn't have asked for a better time to drive pass them, right at sunset. These homes are almost as quintessential San Francisco as the golden gate bridge. For that reason and because I grew up loving Full House it was pretty neat to see them. There is a popular park across the street which was full of people watching the sunset behind the city behind these Victorian beauties and I told Adam we needed to have our next picnic in that park doing just that. 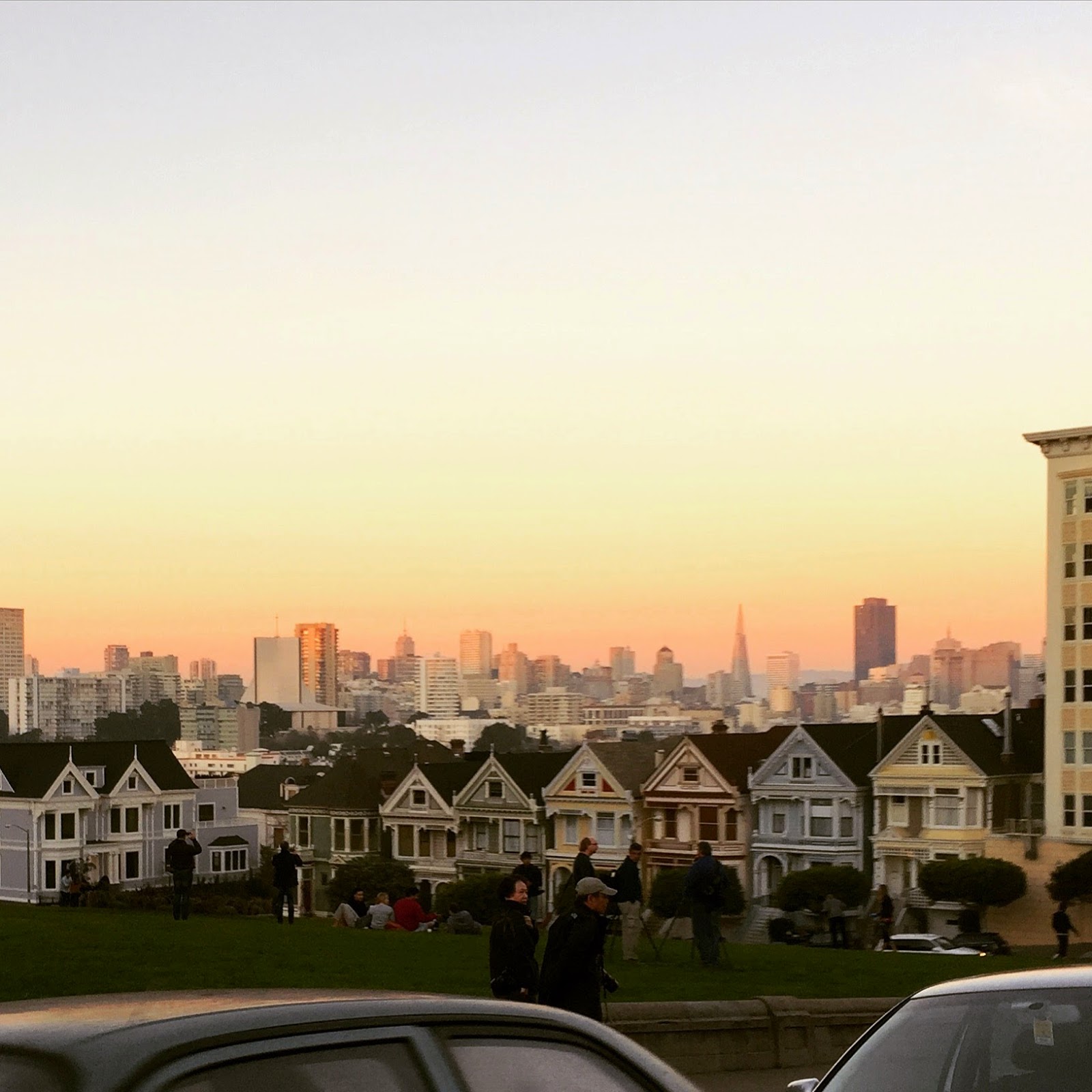 Well, we ended up having another picnic on Sunday, but not at the painted ladies. Instead, Sunday morning we decided to go to Muir Beach so Landon and Kaiser could play I had been wanting to hike up and around the beach and the weather was AMAZING so we thought it would be a win-win for everyone. Unfortunately though, the main road to Muir Beach was washed out in the storms from December and we had to take a very long detour. It took us an hour and half to get to the beach which is not fun with a very excited German Shepherd in the car. On the bright side, the views were stunning. 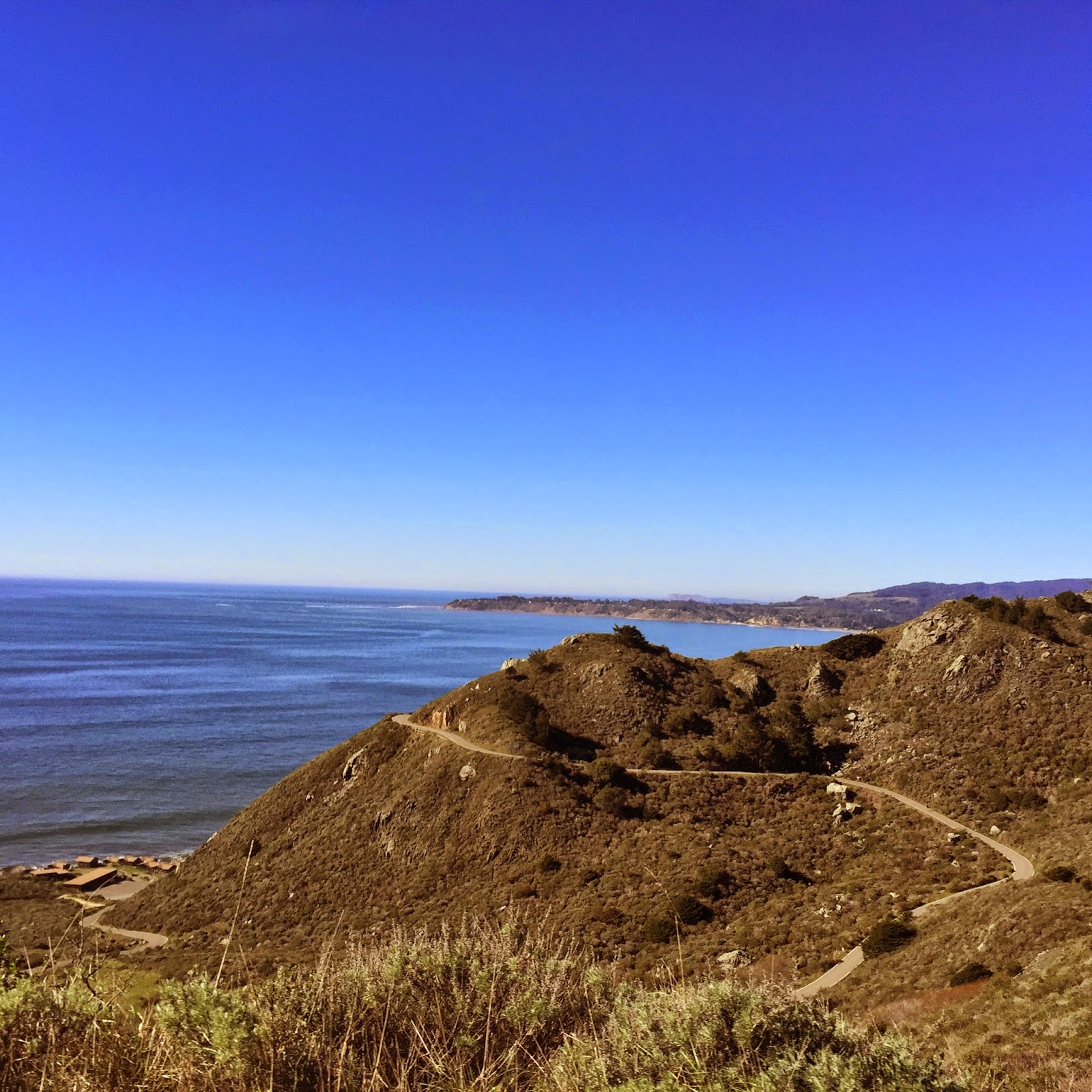 And we passed by Muir Overlook (a place I had been wanting to go) so we stopped to get a glimpse of the view. It was a decently clear day and the view was worth the stop. I also found my dream home. I would love to live in a house all by itself on the rocks overlooking the ocean. As you can imagine, there are so many beautiful homes along the coast. I’m much less interested in size than I am location. I might even be convinced to settle down in one place if it was something like this. 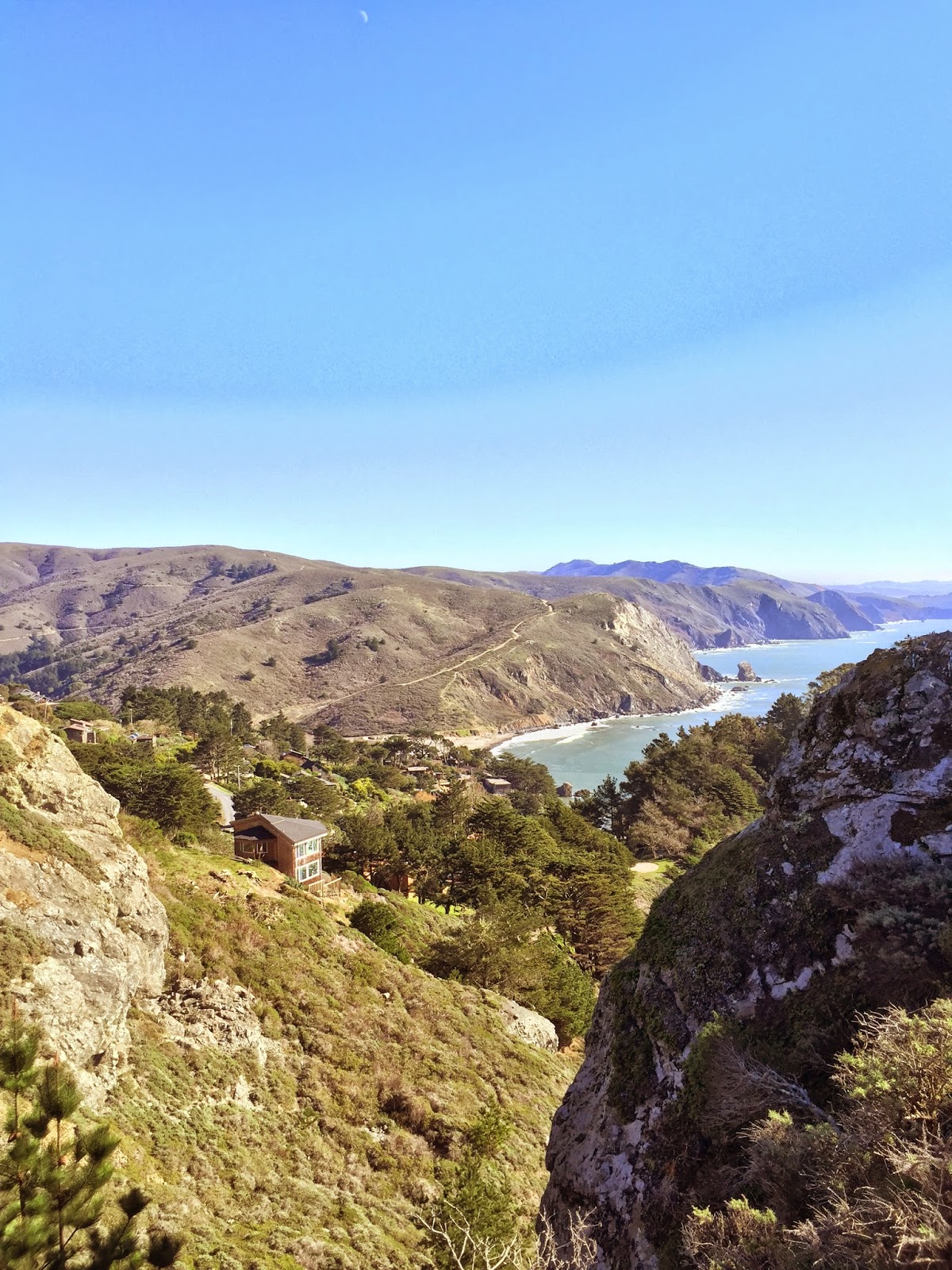 After a quick look around the overlook it was time to get to the beach. Landon and Kaiser are complete beach bums. They could spend everyday, all day playing in the sand and the water. Muir Beach is especially great, because they allow dogs off leash. We bought this toy for Kaiser (that everyone here has) called a chuck-it. It’s an arm that grabs a ball and allows you to throw it without having to touch it, Genius! Needless to say, Kaiser is a machine. He might stop for a minute to catch his breath, but it isn’t long before he is ready to go again. I had to take a break while throwing the baseball with Adam and Landon just to throw his ball or else he would sit and whine. At one point, he even brought Adam the entire toy in an effort to get him to throw it again. 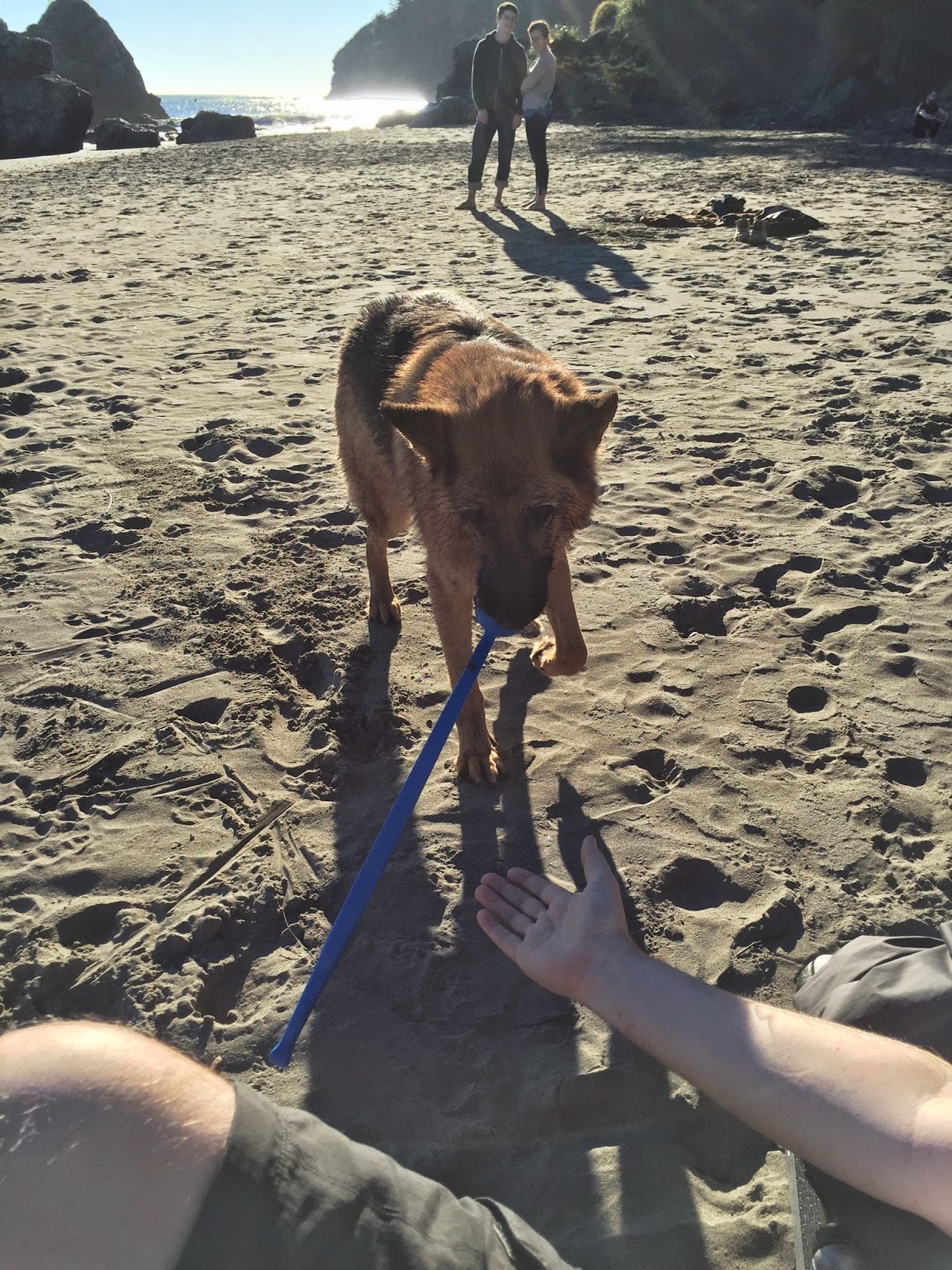 And speaking of throwing, Landon might need some work on catching the baseball, but he has a darn good throwing arm. 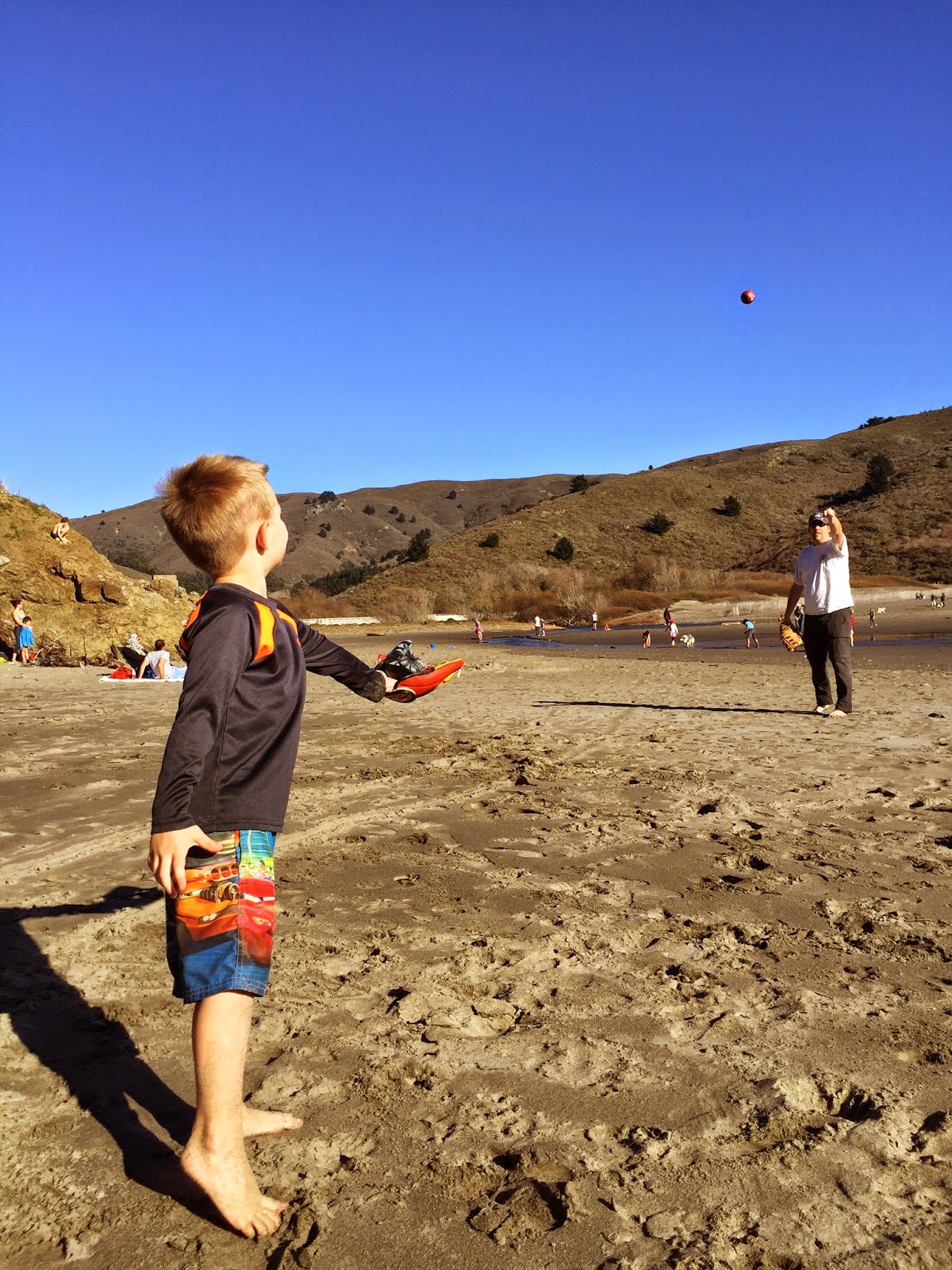 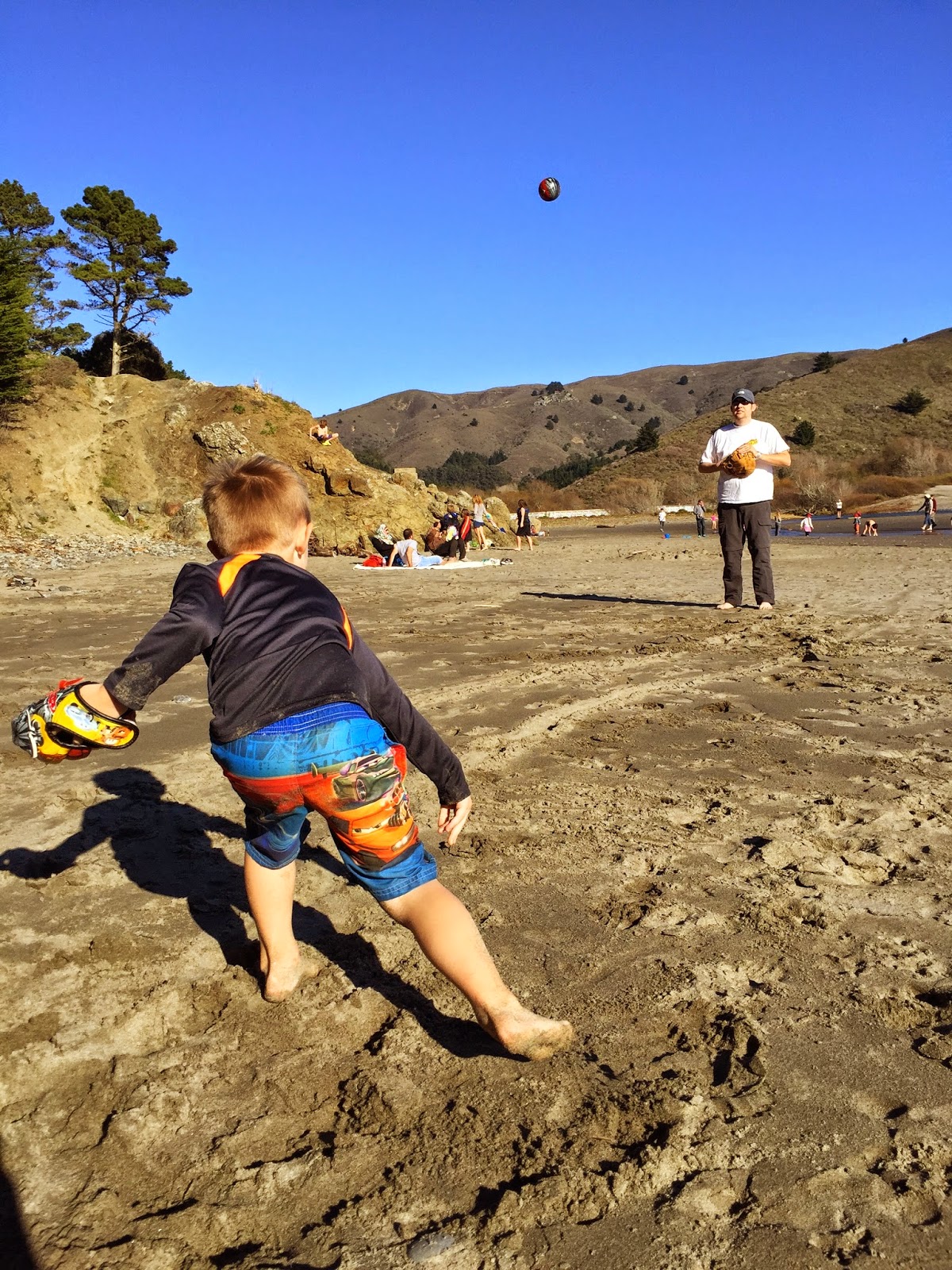 Our Sunday looked a lot like our Saturday with sand involved. Lots and lots of sand... 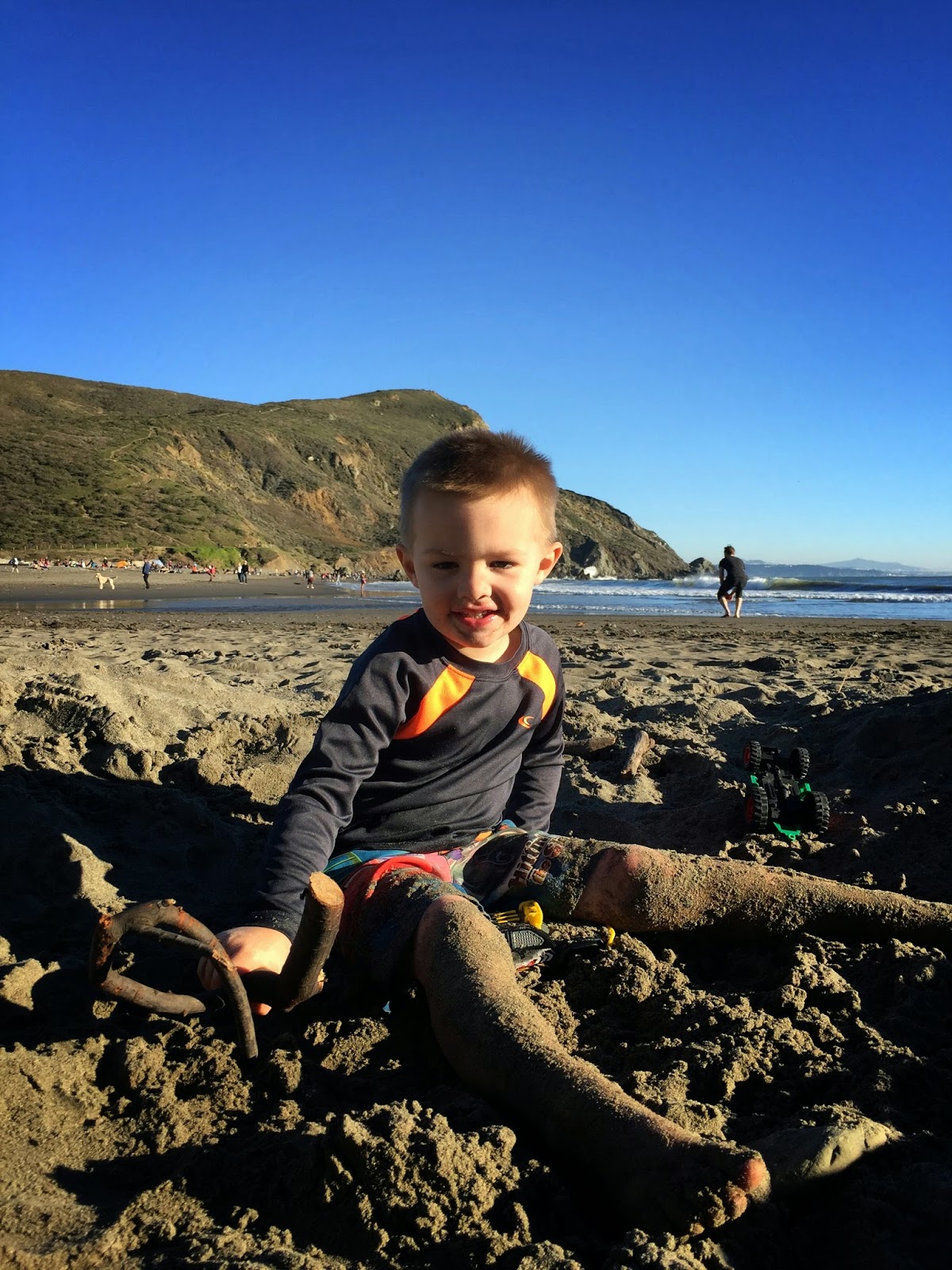 We relaxed on the beach and played our games. We had another picnic and soaked up the sun.It was so enjoyable on the beach I didn't even bother to go hike. 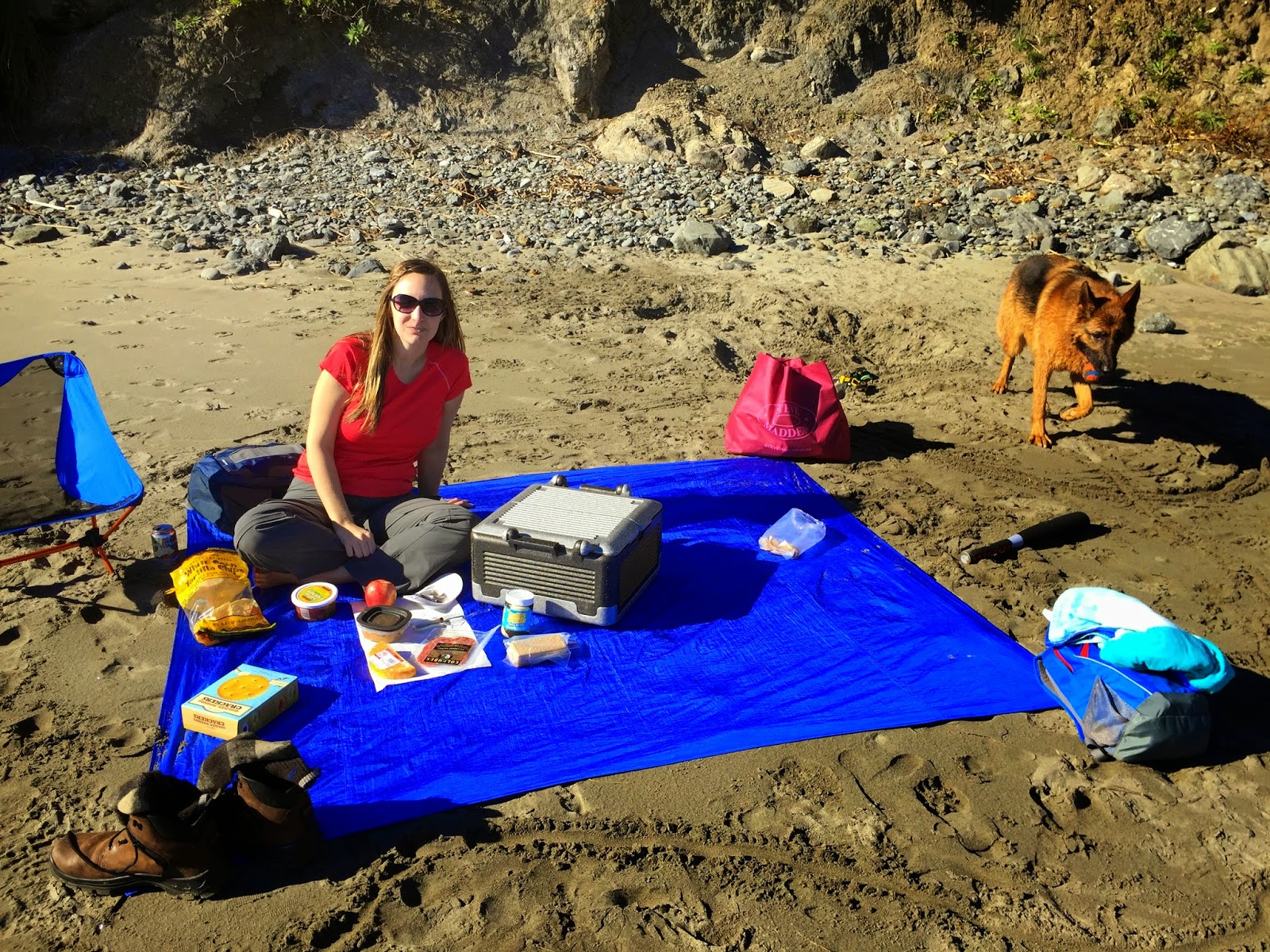 Everyone was happy! We might not have moved mountains last weekend, but we did spend lots of time together just relaxing and having fun. My heart is full of happiness and joy at another wonderful weekend spent with my family and I'm especially looking forward to this coming weekend. My Mom will be arriving later this afternoon to help celebrate a certain munchkin turning 4! How much better does it get than this?
Posted by Unknown at 8:52 AM