A few weeks ago, Landon turned 4 in the most anticipated birthday EVER! 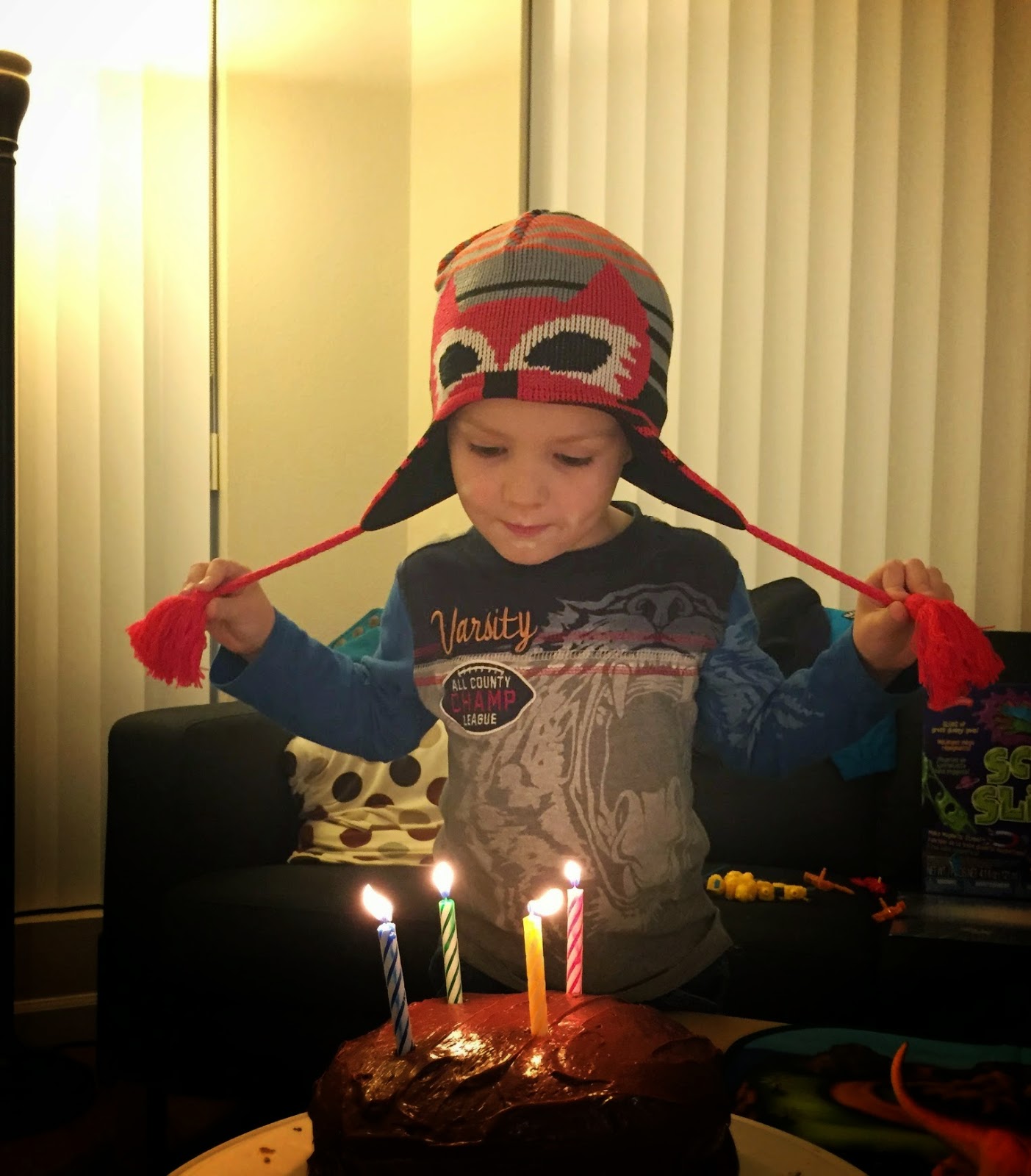 He's been talking about turning 4 for awhile now. All he wants in life is to be big. He kept asking if when he turned 4, would he "be big". His favorite line is "One day...when I am big like my Daddy...". Hes got it so good, but if he had it his way, he'd be a big person tomorrow. Poor thing has no idea what he is asking for.

My Mom and her boyfriend came in to visit and celebrate his birthday with us which turned out to be really nice, because Adam was out of town for work. On his birthday, we kept it simple and saved the big celebration for the weekend. The day he turned 4, he got to stay home with Grandma and Jack and play all day. They spent a lot of time at Golden Gate Park where he rode around on his bike and explored the park. When I got off work, we went to dinner and then came home for some presents and cake. I think we entered gift overload as he was too excited about the next gift in front of him to even pay attention to the gift he had just opened. 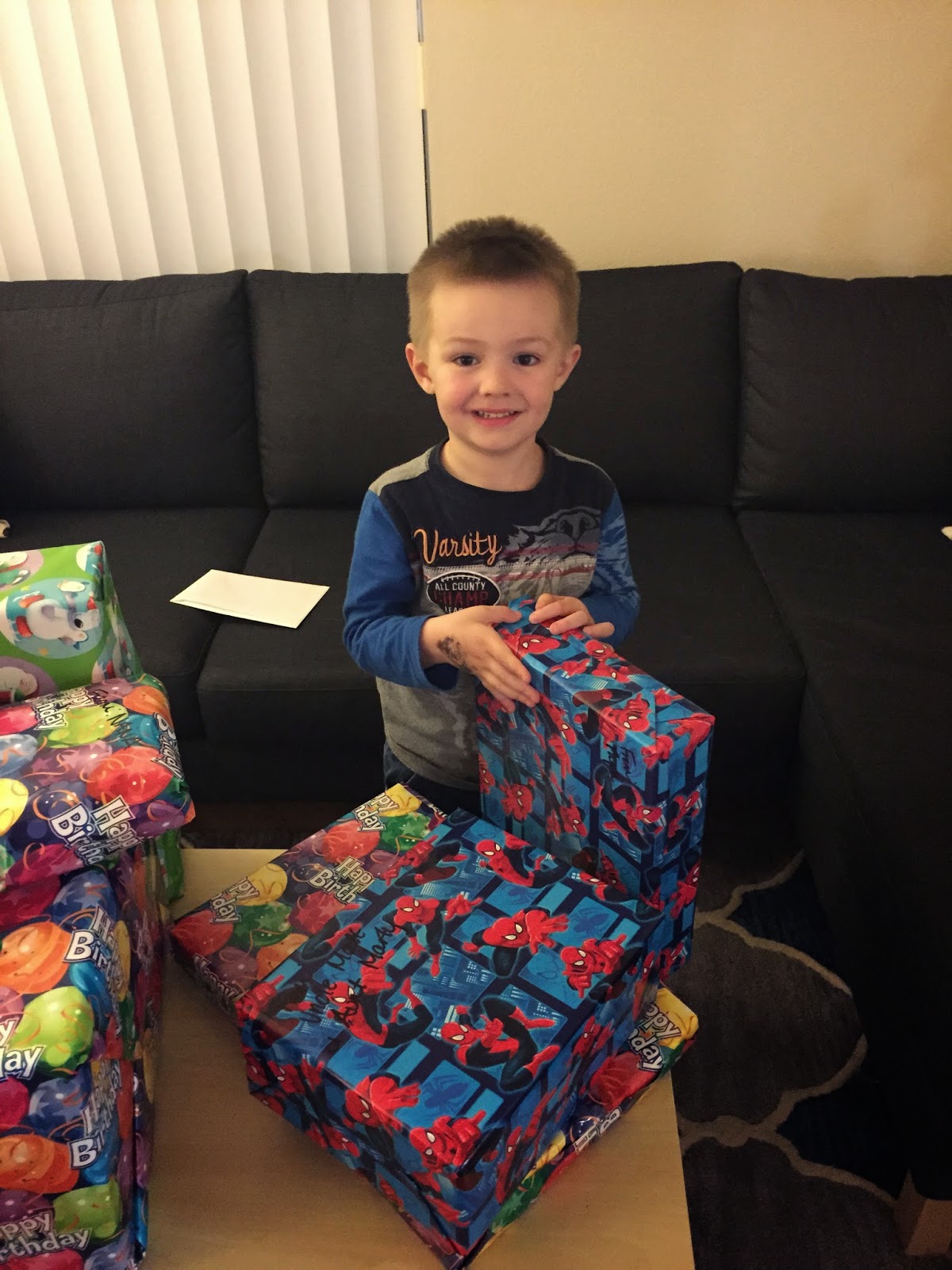 Once they were all opened it was a different story and he loved playing with everything. He was so into his gifts, he didn't take more than a bite of his cake. Landon has the best family and he received all kinds of great gifts. He was pretty excited about his first pair of boxers from his Nana. 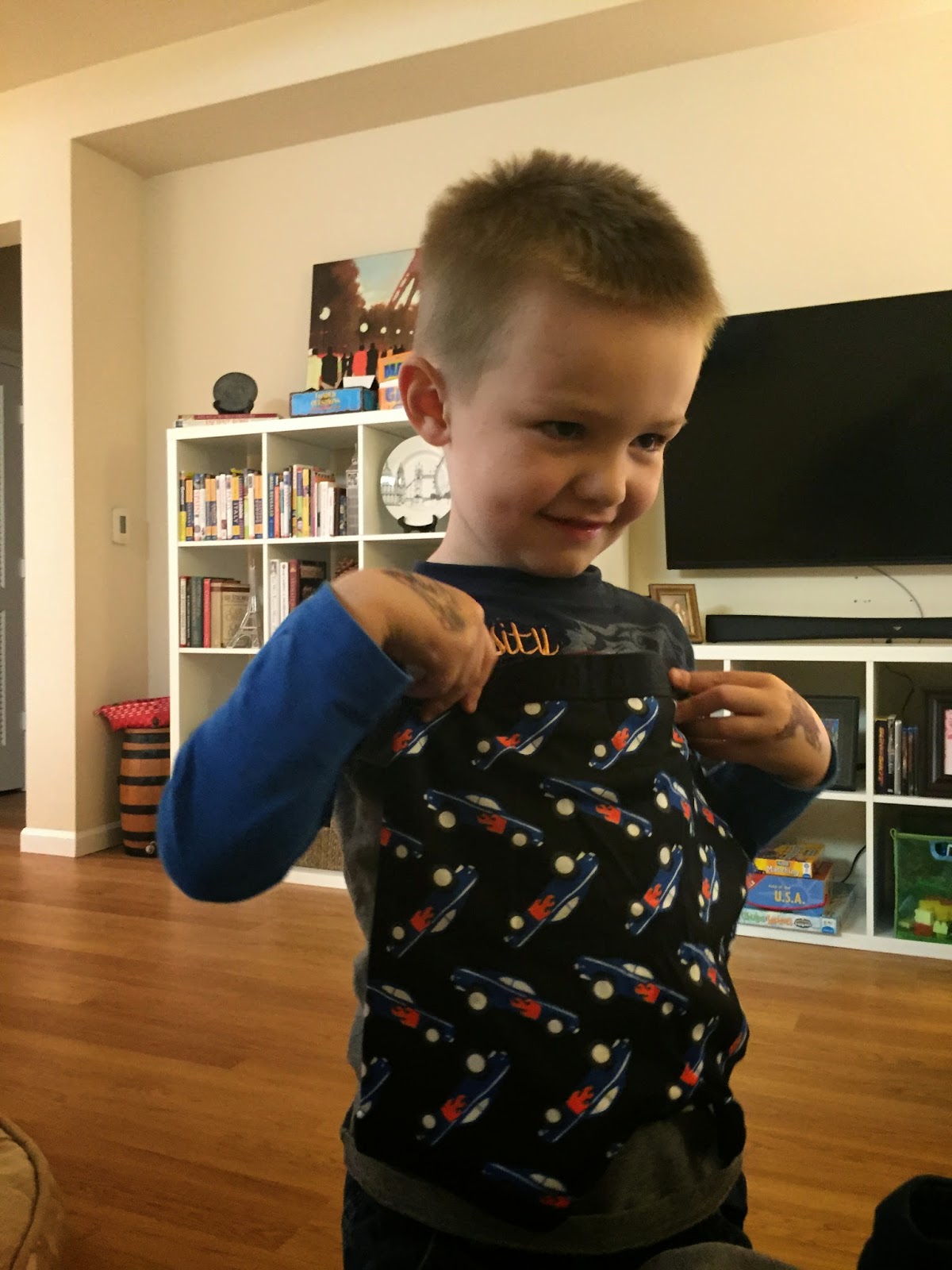 His dinosaur mat and collection from his Aunt Mary and Uncle Sergio. 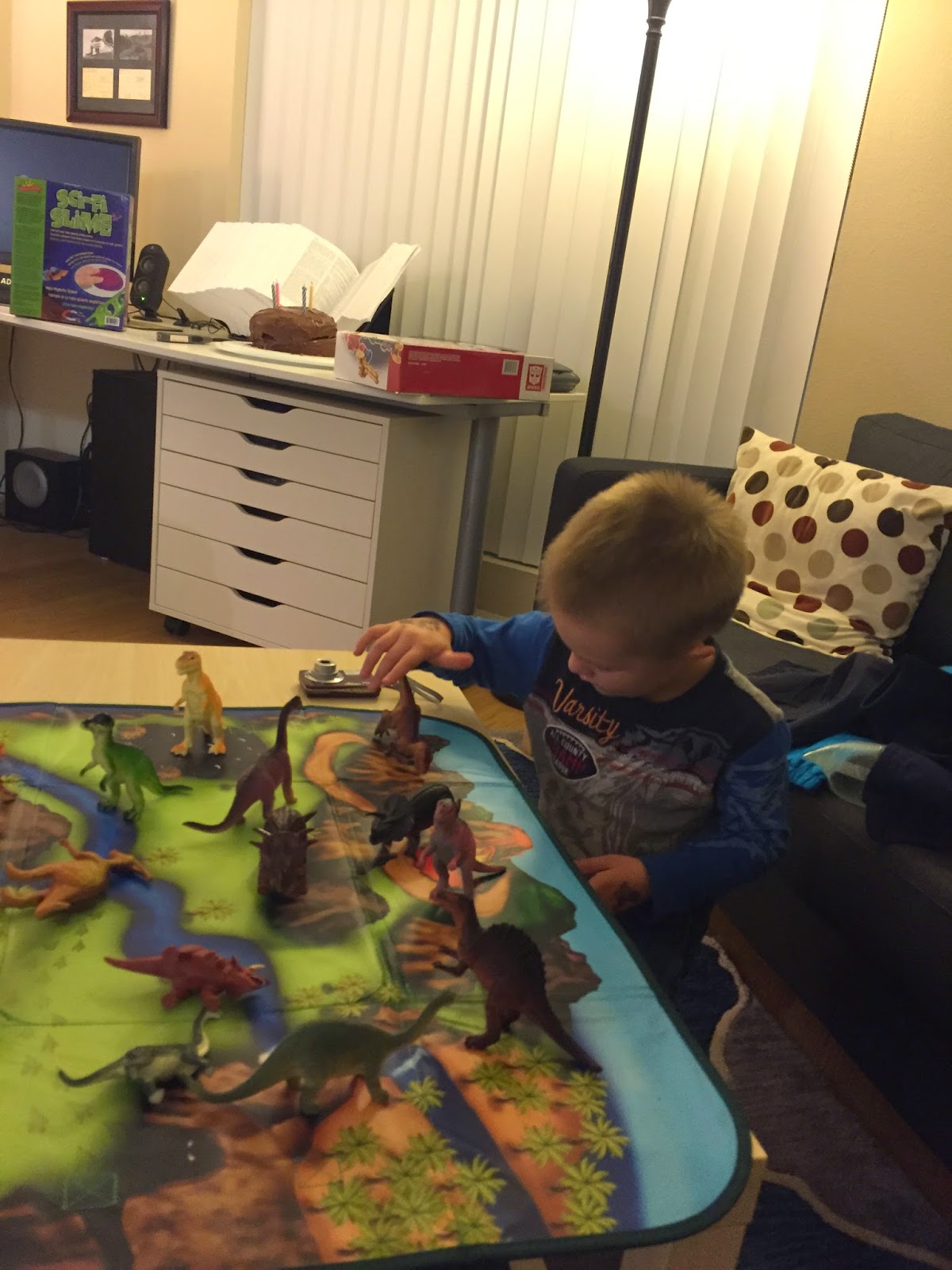 A Passports monthly subscription from his Uncle Matt and Aunt Marty. 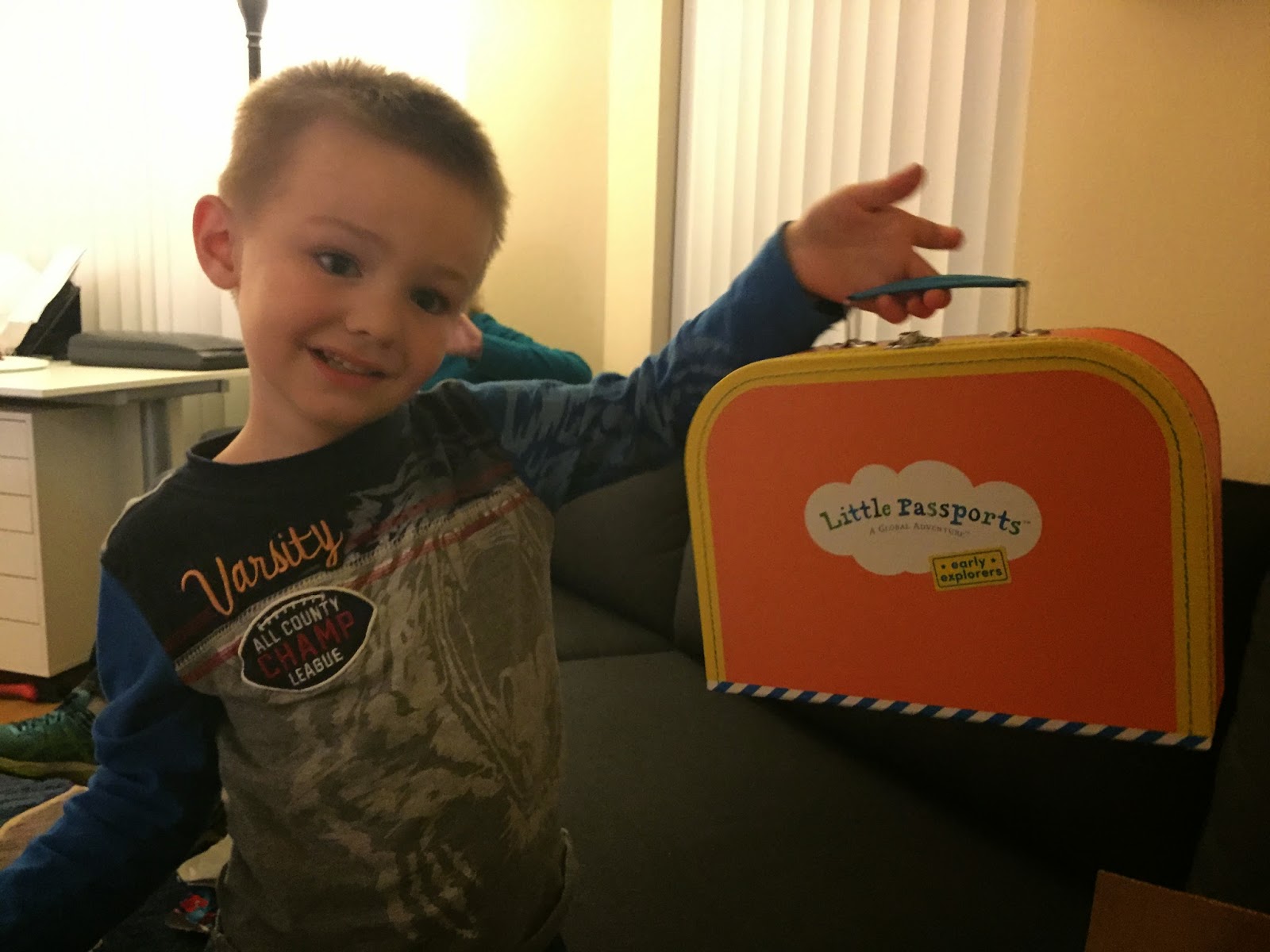 My favorite was one of the many gifts from his Papa and Nana Cathy, a Leap Frog Write and Scribble that helps teach him to write out his letters and numbers. He absolutely loves it and just in the last week he has made a big improvement on his writing. 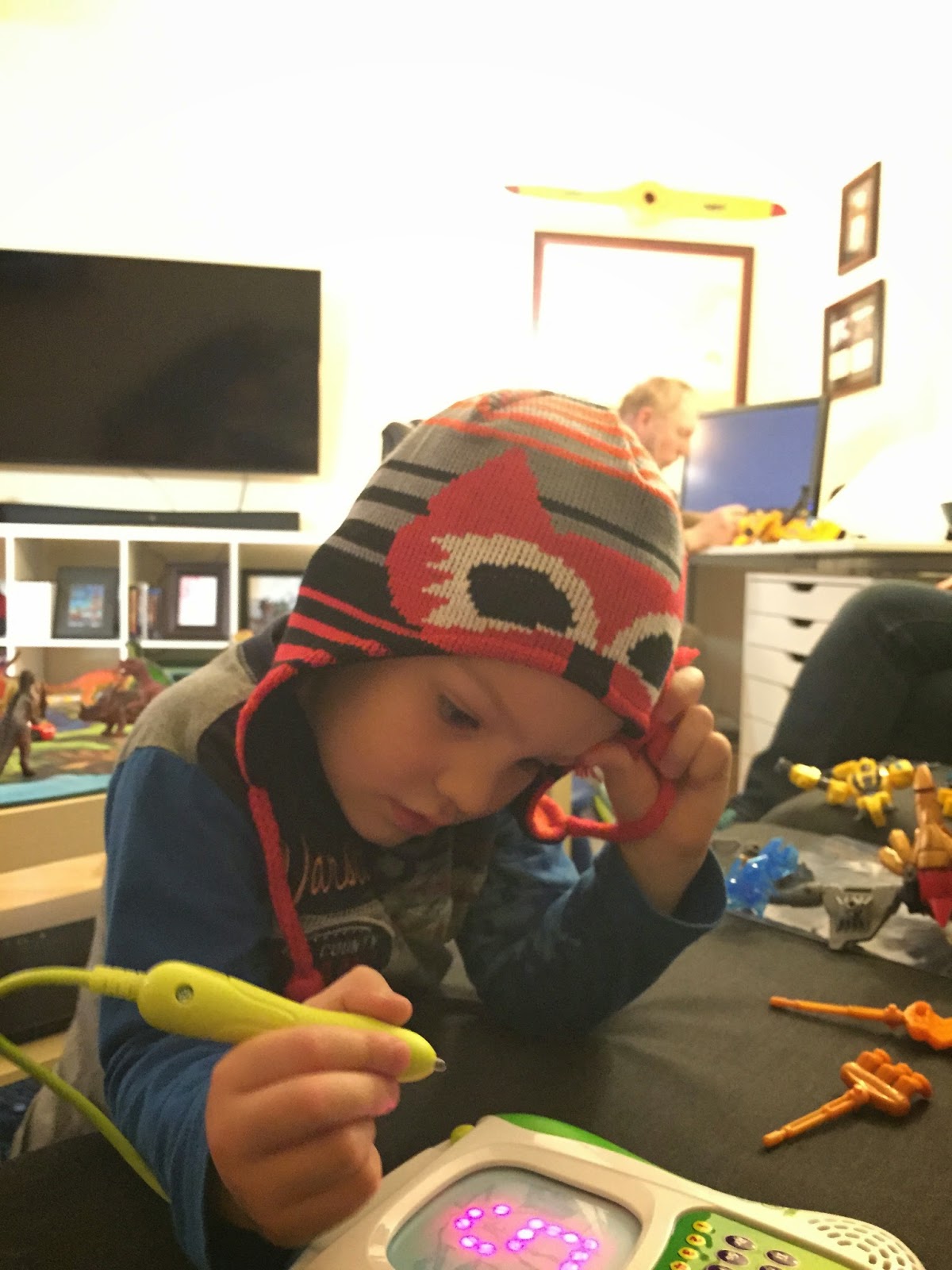 His most useful gift came from his grandma in the form of a much needed wetsuit. Which he immediately put on (along with his new hat) and continued to wear for two days. 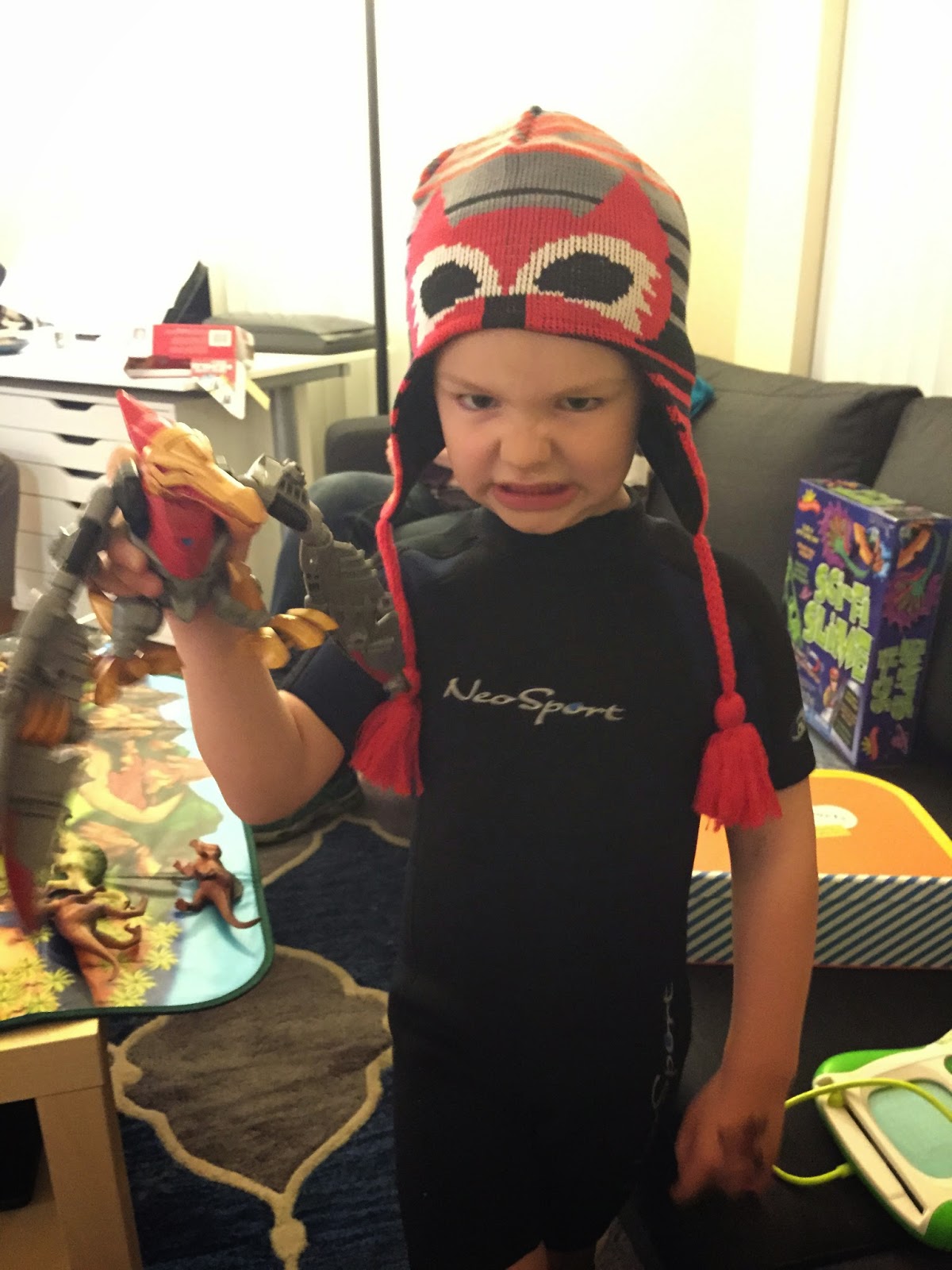 I saved the gifts from Adam and I until his Daddy got home on Friday which turned out to be a good idea to space them out a little. We got him a few games since recently we have taken to playing games as a family at night. He also got some batman socks and underwear (which is actually the one things he really wanted for his birthday). We also got him some outside toys like a Nerf football, a kite, a sand toy set, and a new big boy bike, 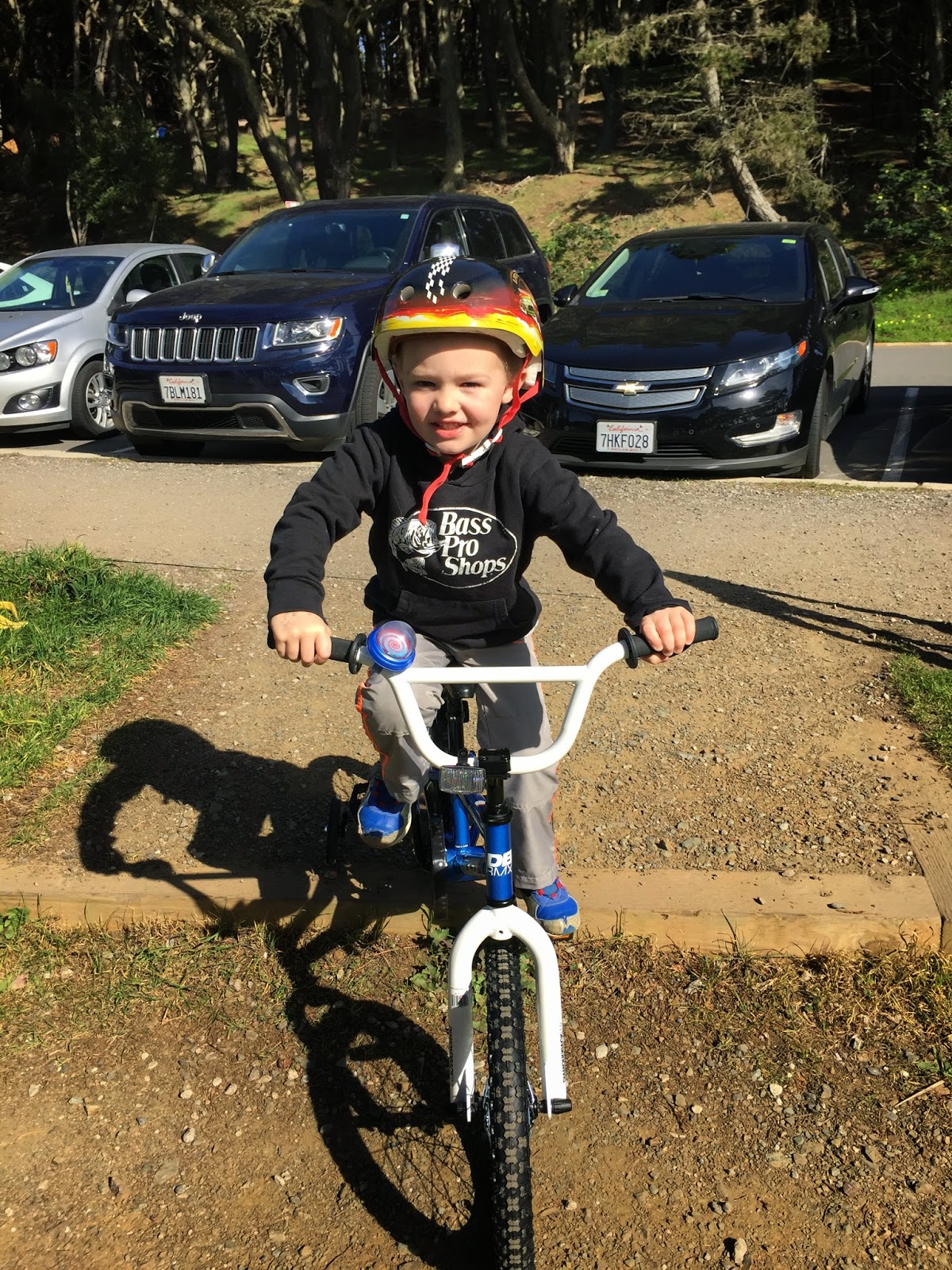 After his first birthday, I decided not to have birthday parties for him, but to take him out on (or around) his birthday for a fun day of activities all geared towards him. It isn't usually something we do, so it is extra special for him to have a day doing things he wants. I try to think of some fun things I think he would like and then we let him pick what he wants to do the most. This year, his first pick was a ski lesson at a nearby ski resort, but the weather around Tahoe hasn't been the greatest so we put that on the back burner for a little later and he decided on a train ride instead. There are a few companies in the surrounding areas that offer train rides in a variety of settings, but after a little research and talking to other people we decided to head over to Santa Cruz and go on the Roaring Camp Railroad Steam Train through the Redwoods. We picked this train ride for a number of reasons, the main one being the steam engine. I thought it would really be a delight for all of us and it was! 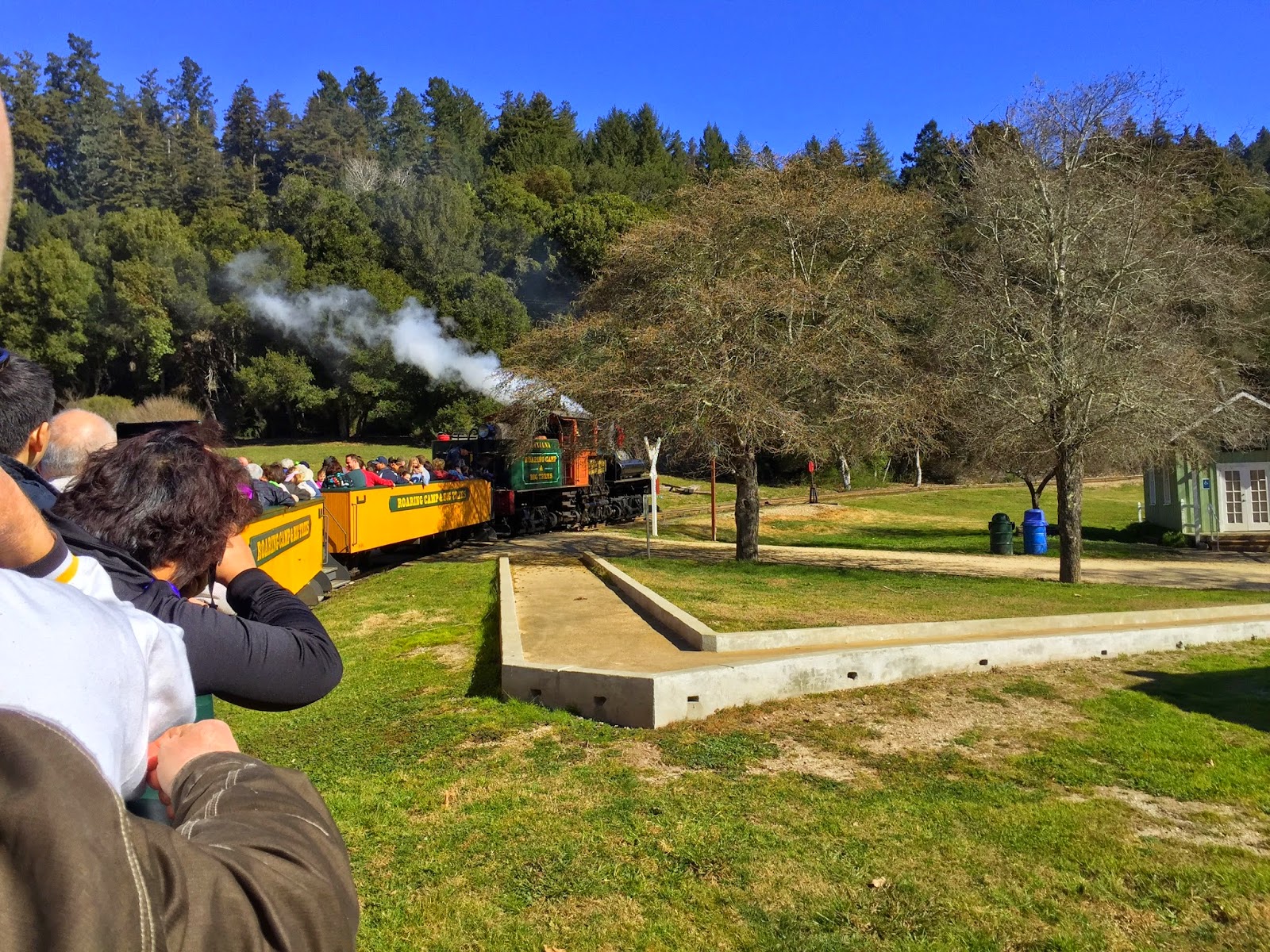 We made it in time for the once-daily (winter schedule) ride just by the skin of our teeth. We really lucked out though getting our seats at the end of the third open cart. I think we had the perfect seats as we were not too close to the very loud engine and we didn't get stuck in the back three carts which all had a canopy over them. 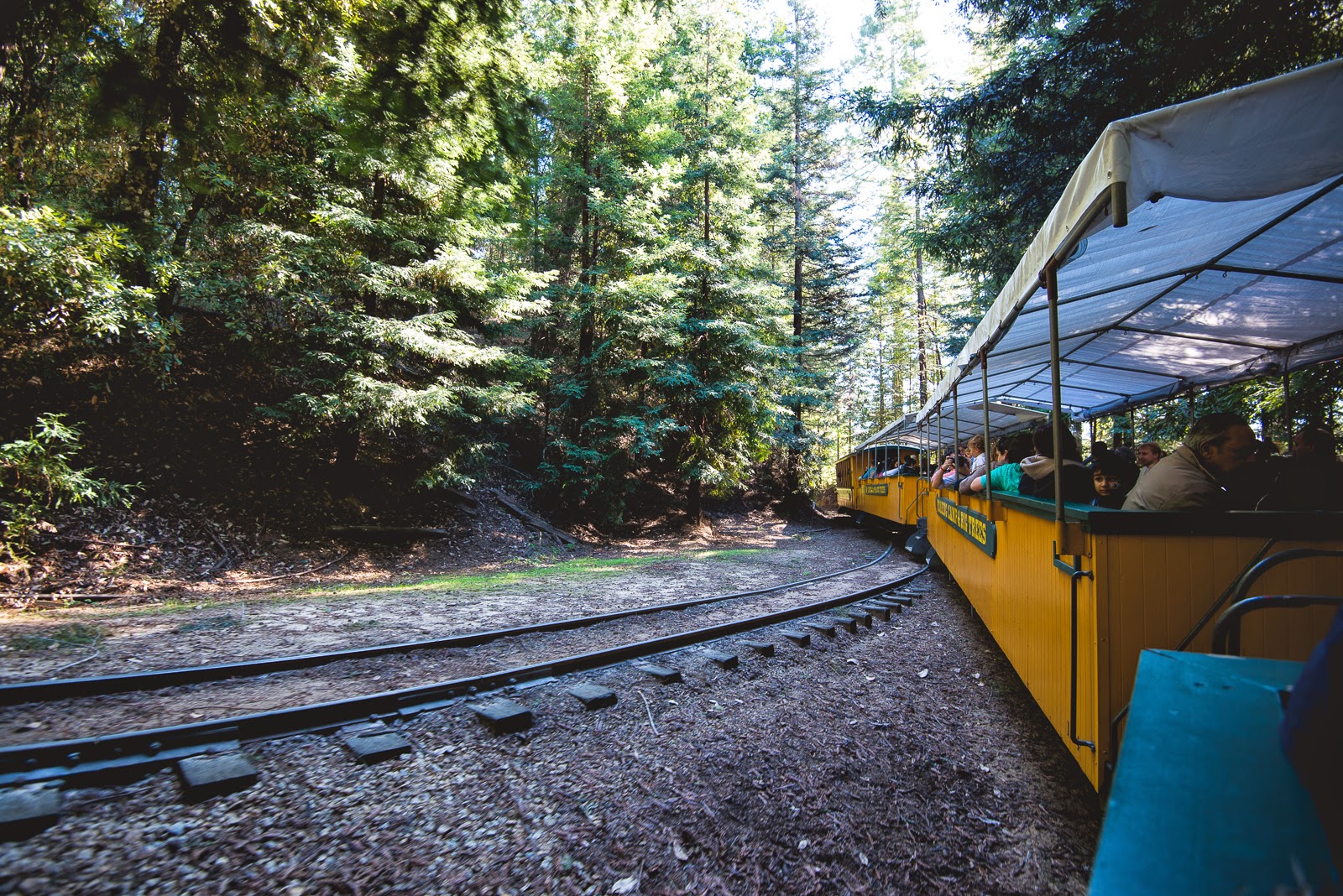 I would not have wanted anything overhead as we spent most of the time gazing up and out as the giant trees soared above us. 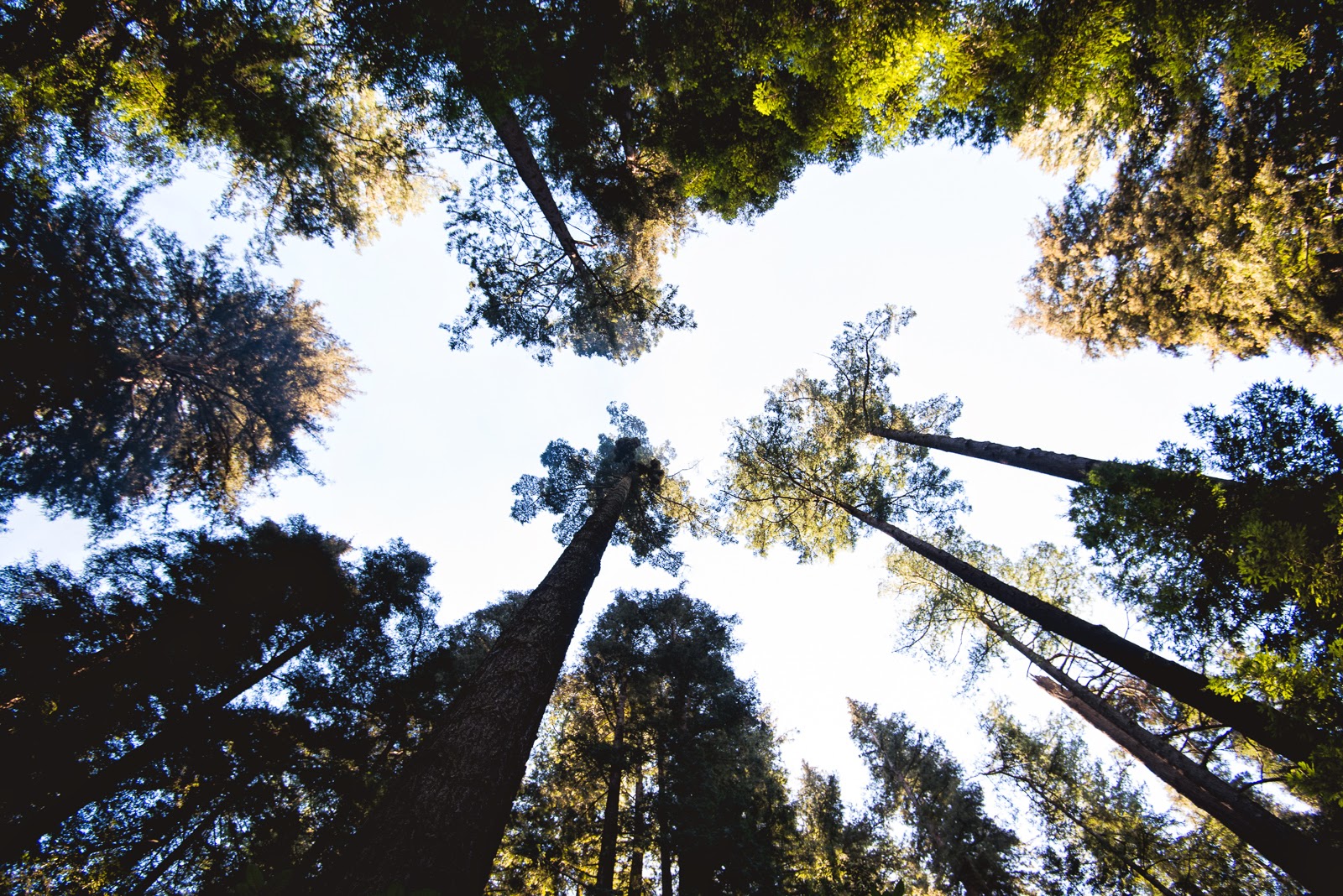 Although there were a number of children, there were also a number of adults without kids and I don't think they felt that this was geared towards children at all. The train was amazing to see especially in action. A few times it even put on a little show blowing it's steam and making music.

I just loved the setting and enjoying the peaceful ride on such a beautiful day. The tracks were perfectly woven through the forest, many times coming within feet of the largest Redwoods we've ever seen. A number of times, we passed through an opening and got a glimpse of the vast expanse of the Santa Cruz mountains spread out as far as we could see. And although I didn't have time to snap a picture, we got our first glimpse of a banana slug, a bright yellow slug that is huge! (google them!) 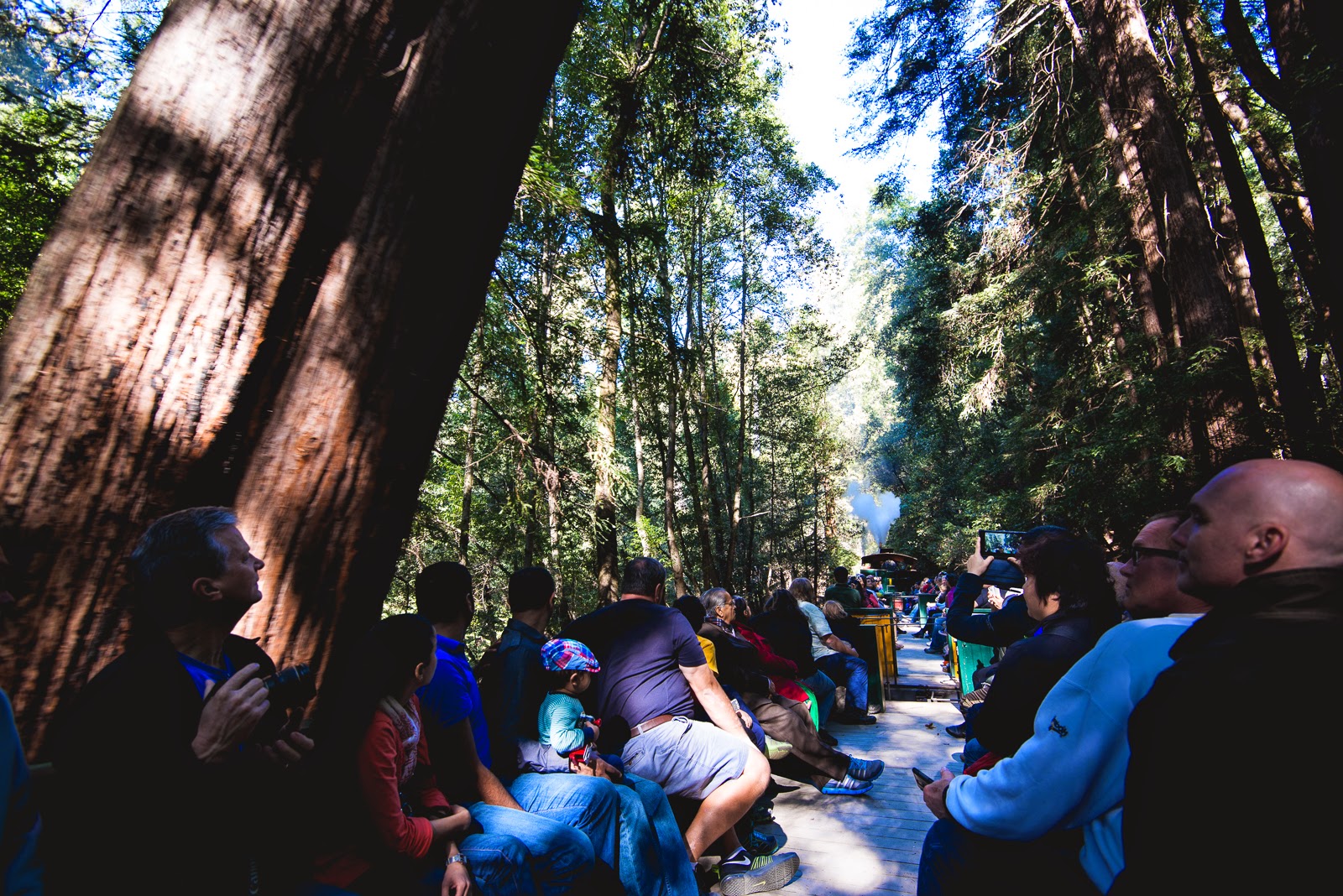 About 30 minutes into the ride, we reached the peak of our trek, Bear Mountain. At this time, they let everyone off to explore the area for about 15 minutes. My Mom and Jack went over to hear them talk more about the redwoods and the history of the area, while we studied the engine up close. Adam was especially enamored with the craftsmanship and mechanics of the engine which dates back to the 1890's. 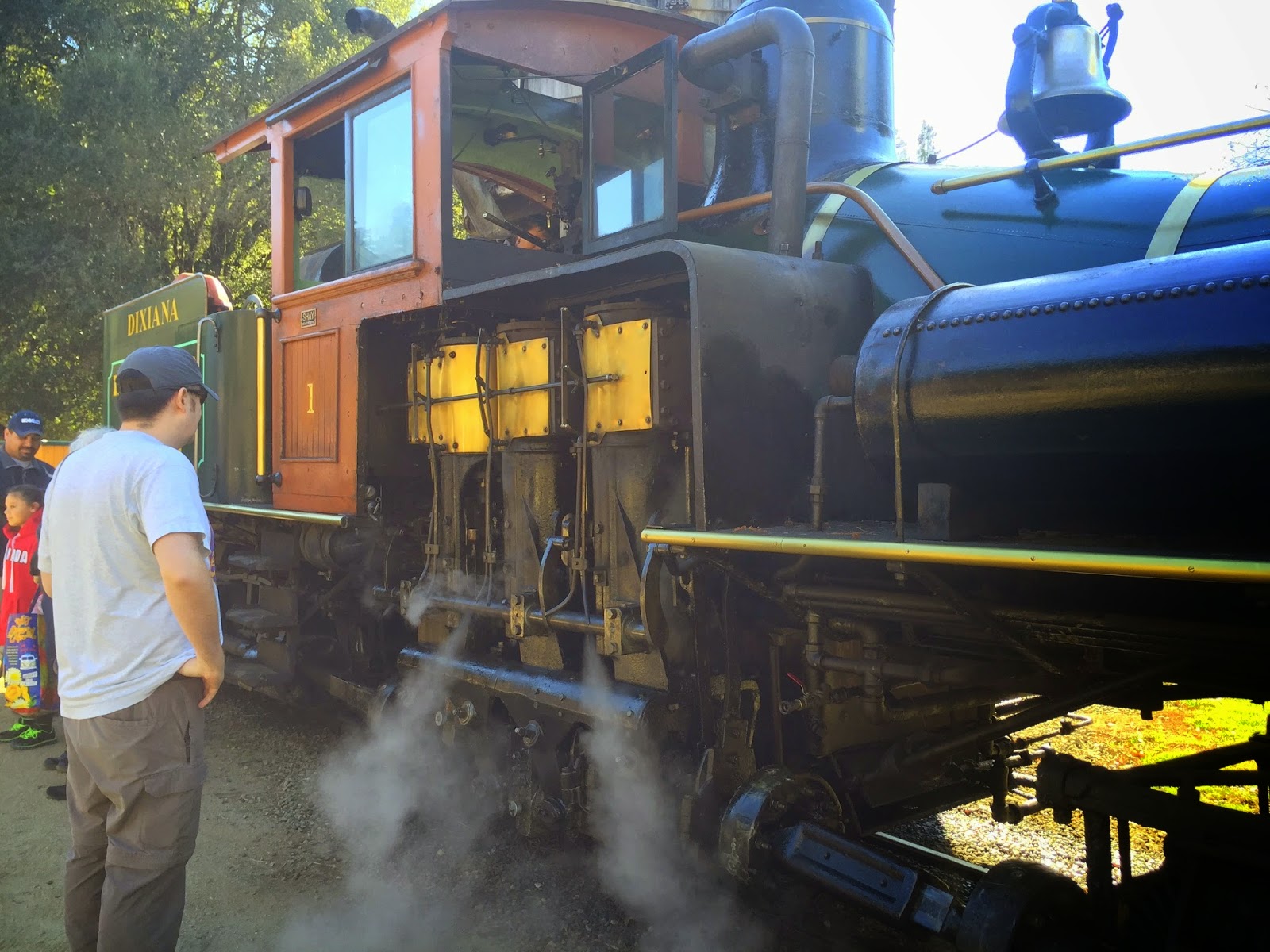 We should have asked if Landon could get up inside, because once one family asked and the conductor was happy to oblige and a line quickly formed. Landon was a little scared of getting too close to the big engine and was especially worried the steam would burn him, but he loved it none the less. 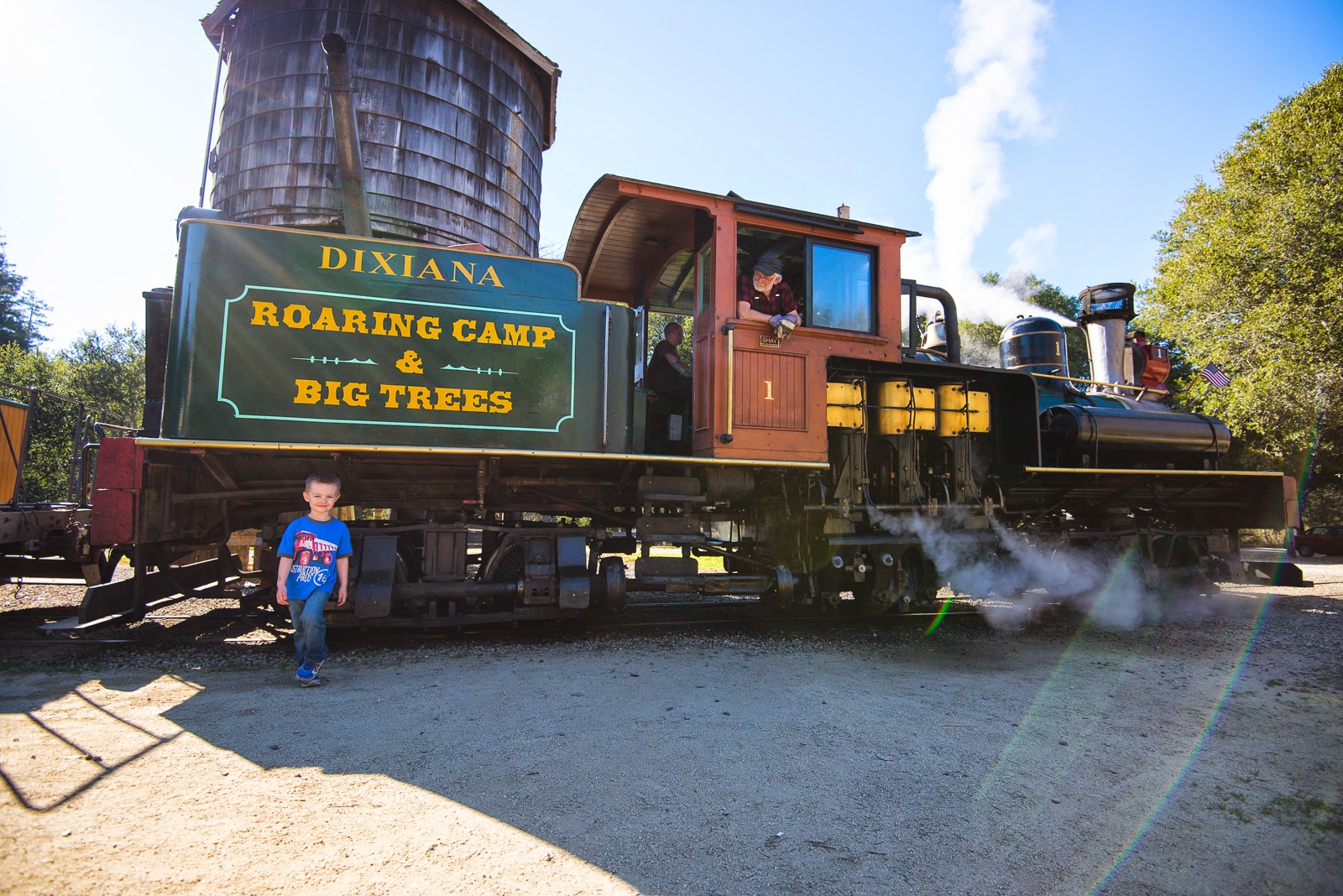 After the break, everyone got back onto the train and we went back down the way we came. I would have enjoyed a longer train ride, but the 1.15 hour ride was perfect for Landon and his short attention span. It was just long enough for kids to enjoy it and stay captivated with the experience. I don't recall a single child being antsy despite everyone remaining seated during the ride. When we arrived back at the station, we treated ourselves to some ice cream and enjoyed the setting a bit. The entire place is made up as an old western town which really makes the entire experience feel more authentic. 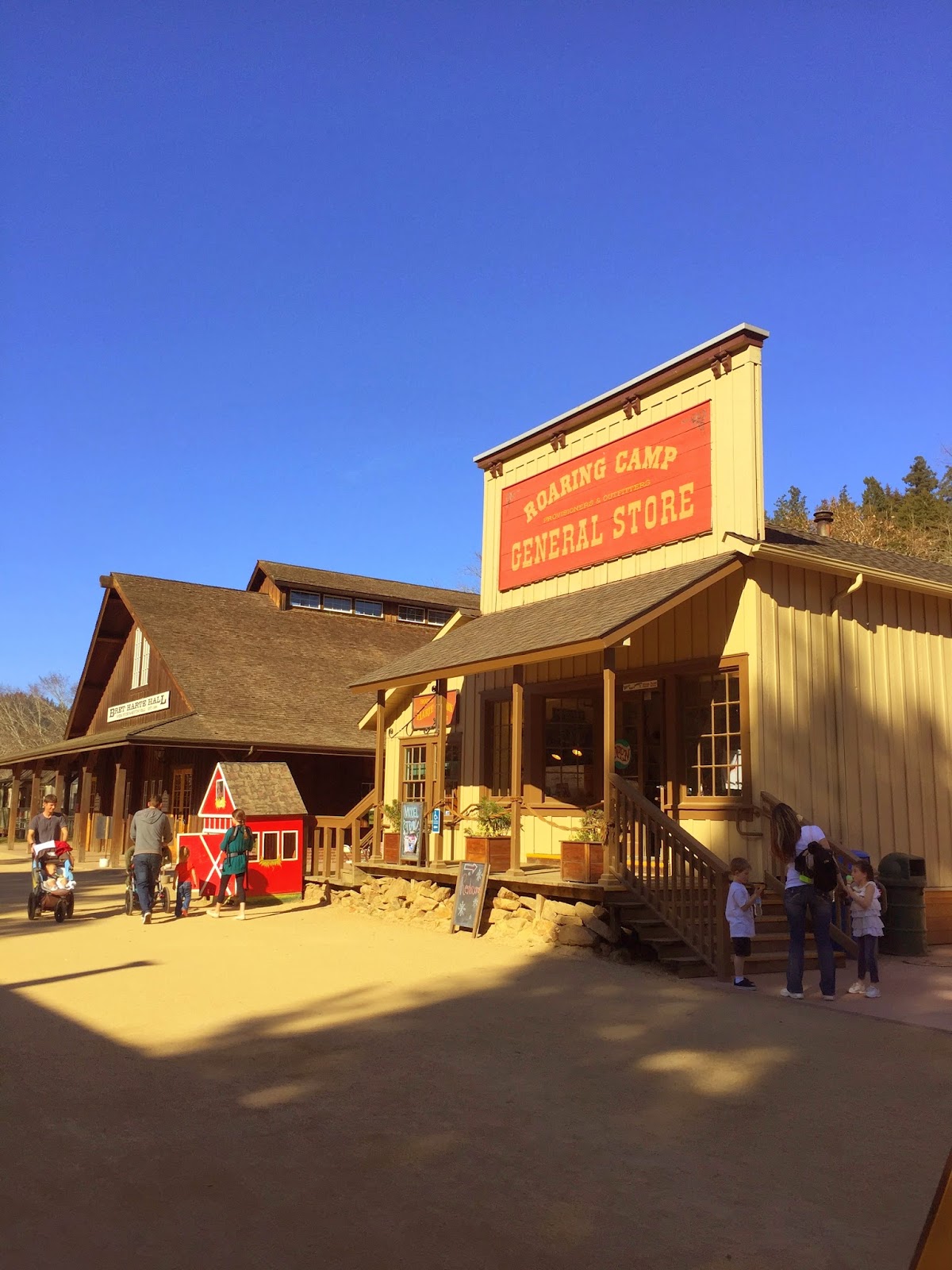 Given that we visited in the winter (or off season), a lot of the stores and activities, such as gold panning, were not open. We could tell in the summer the place hosts big crowds and has a lot going on, but we didn't feel like we had missed out at all. The train was full so any more people would have just meant longer lines for ice cream. More events would have just been more ways to spend money and since the train ride alone cost the three of us about $75, we felt like we had spent enough. Although, it seemed a little pricey, it was well worth the cost and something we all enjoyed. It isn't something we will do often, but they do have a Easter Egg Hunt and since we lack family to spend our Easter with or space for egg hunts at our house, it might just be the perfect way to spend Easter.

After our yummy snacks, we decided to head to Landon's favorite place to finish out his big day...the beach. Only 20 minutes away from the train, we headed in the direction of the water and ended up on the Santa Cruz pier. It's the first pier I've been on that also functions as a parking lot, but it worked out great. We even got our first glimpse of one of our summer stops, the boardwalk. 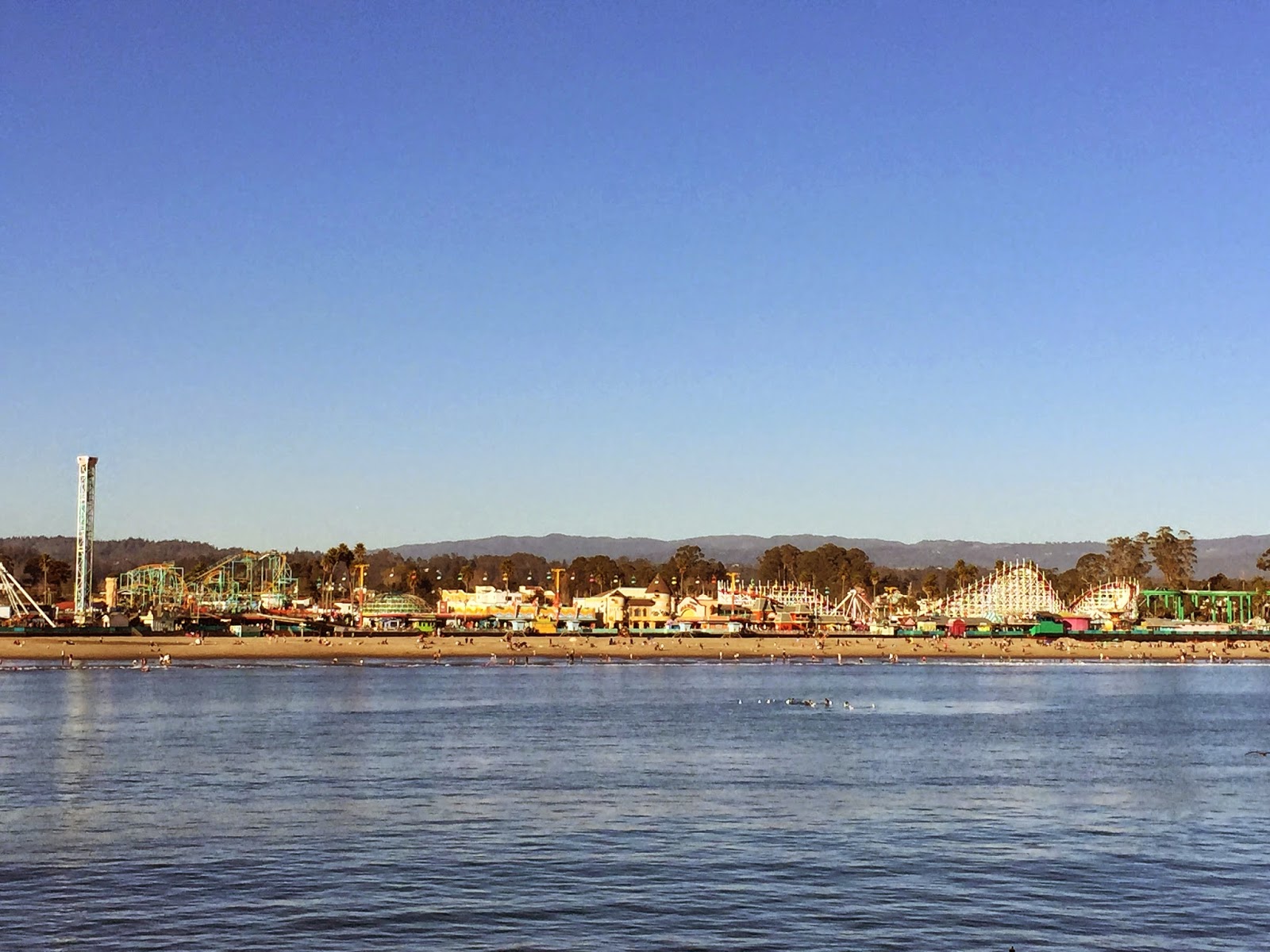 We unloaded Landon's bike and let him ride it all the way down to the beach. 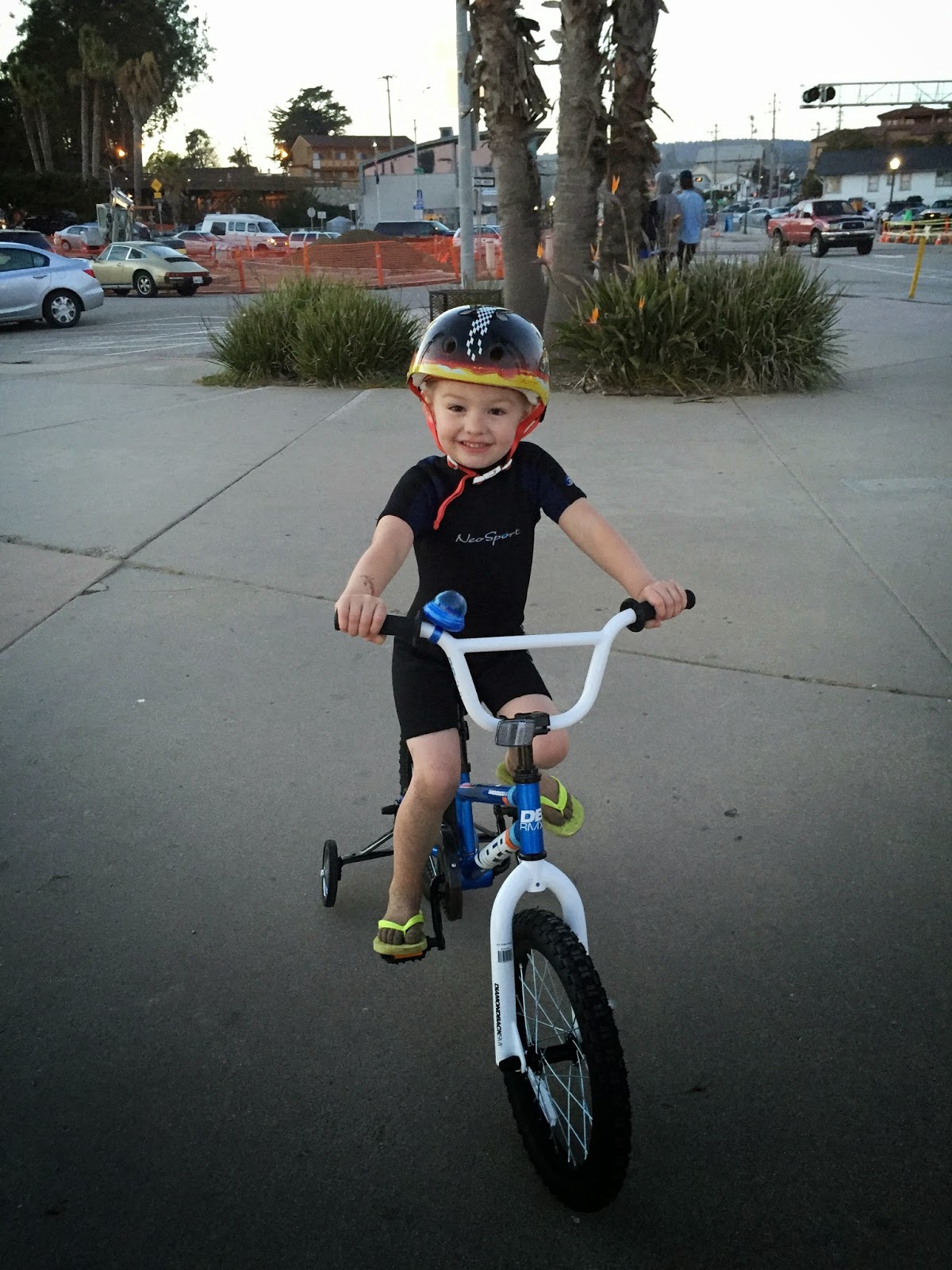 We packed a picnic and so while Landon had the time of his life, we enjoyed some yummy food with a great view. Afterwards, Landon and his Daddy worked on building a sandcastle. 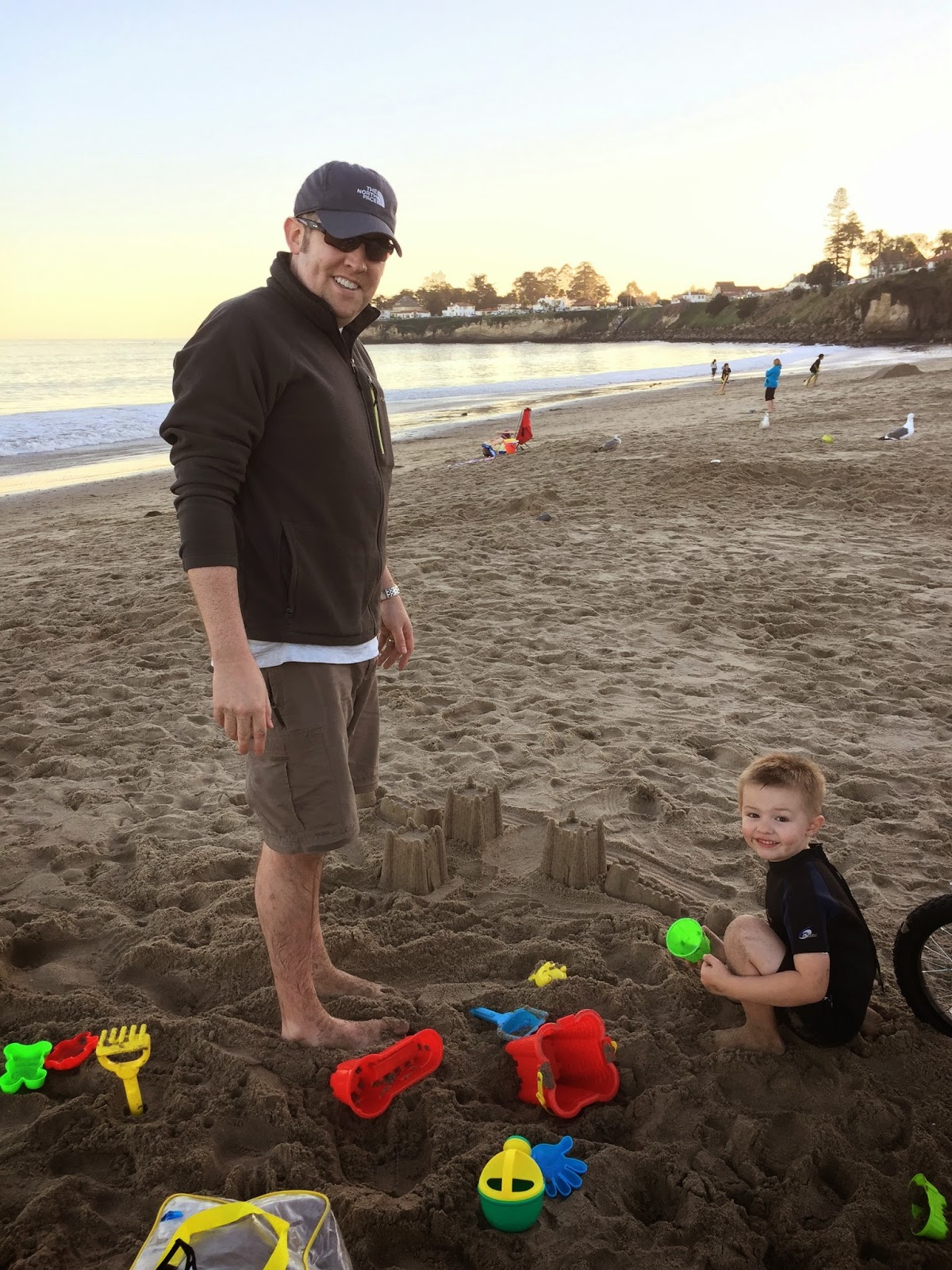 Even my Mom couldn't help but join in on some beach fun and threw the football around with us for a bit. I don't think I've seen my Mom throw a football. 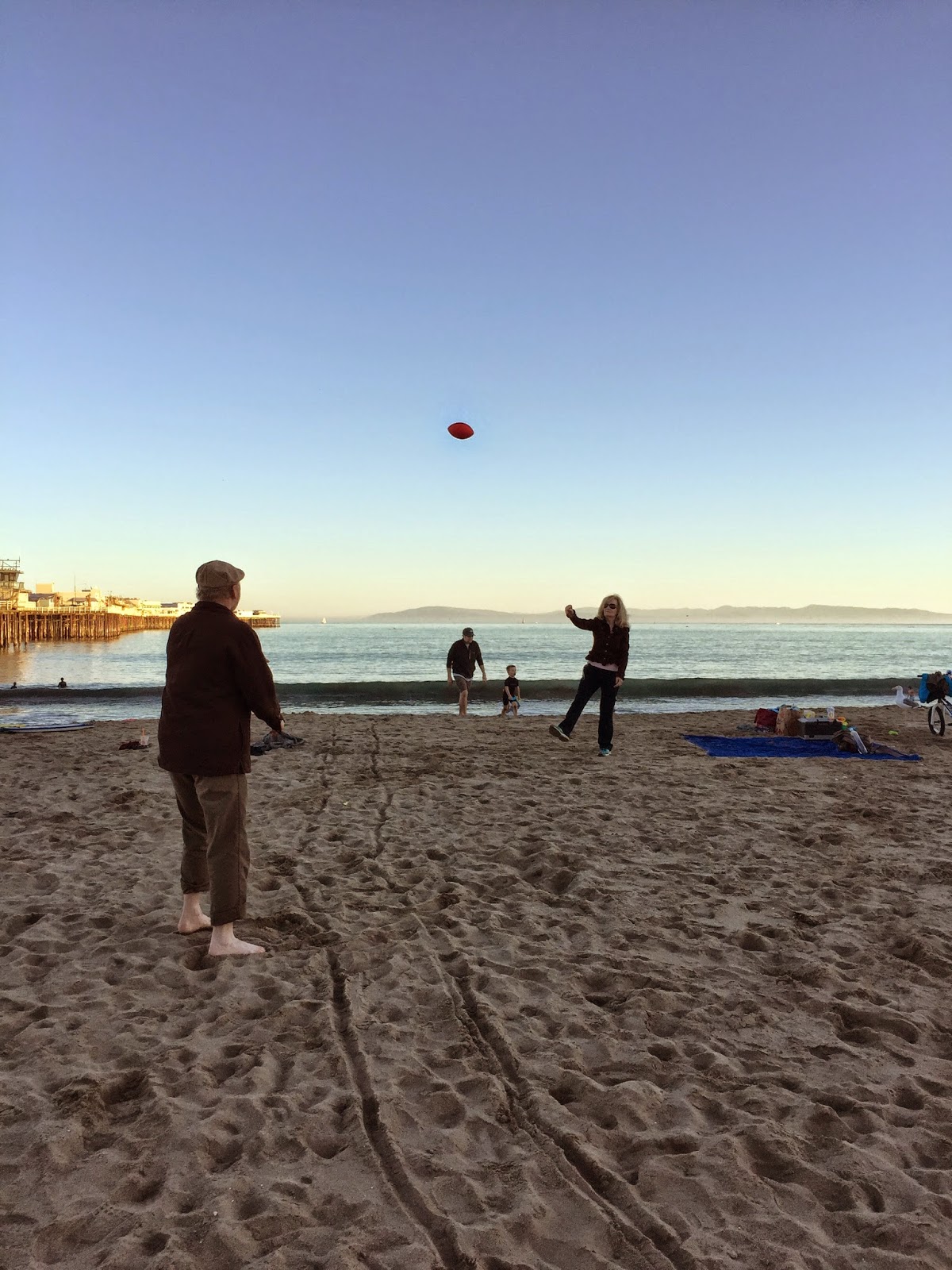 Unfortunately, it wasn't long before the sun was setting and the temperatures started to drop. We ended the day with a beautiful beach sunset. 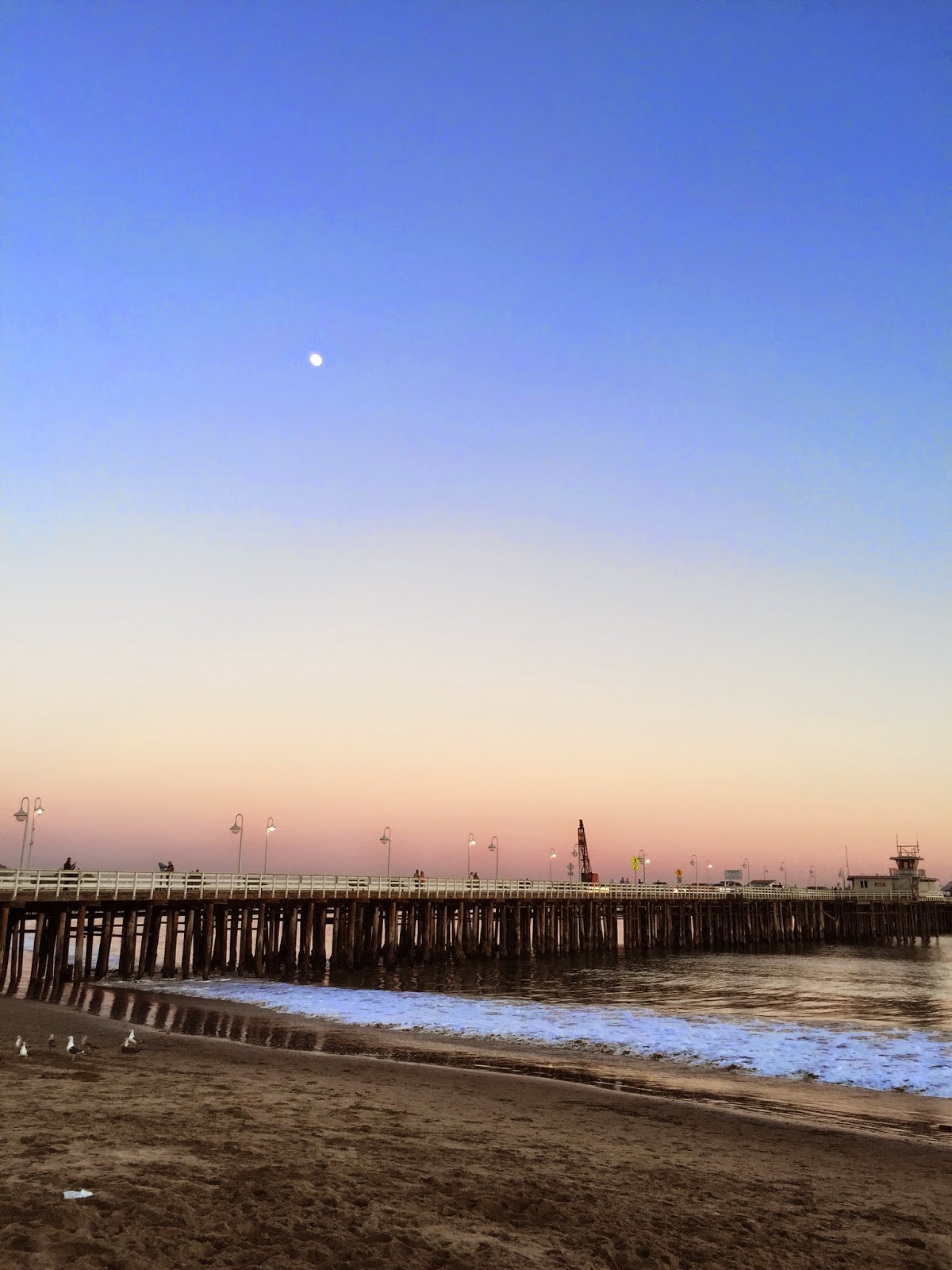 Once it was cold, we packed it all up and Landon rode his bike back up the pier to the car. That is about as good as it gets in his little world. And if there is any question if this guy had a good birthday weekend, Sunday night, about an hour after he went to bed, Adam and I heard a thump. We didn't know what it was at the time, but a little later Adam happened to go into Landon's room to find this. Out, stone cold, even the fall didn't wake him up. 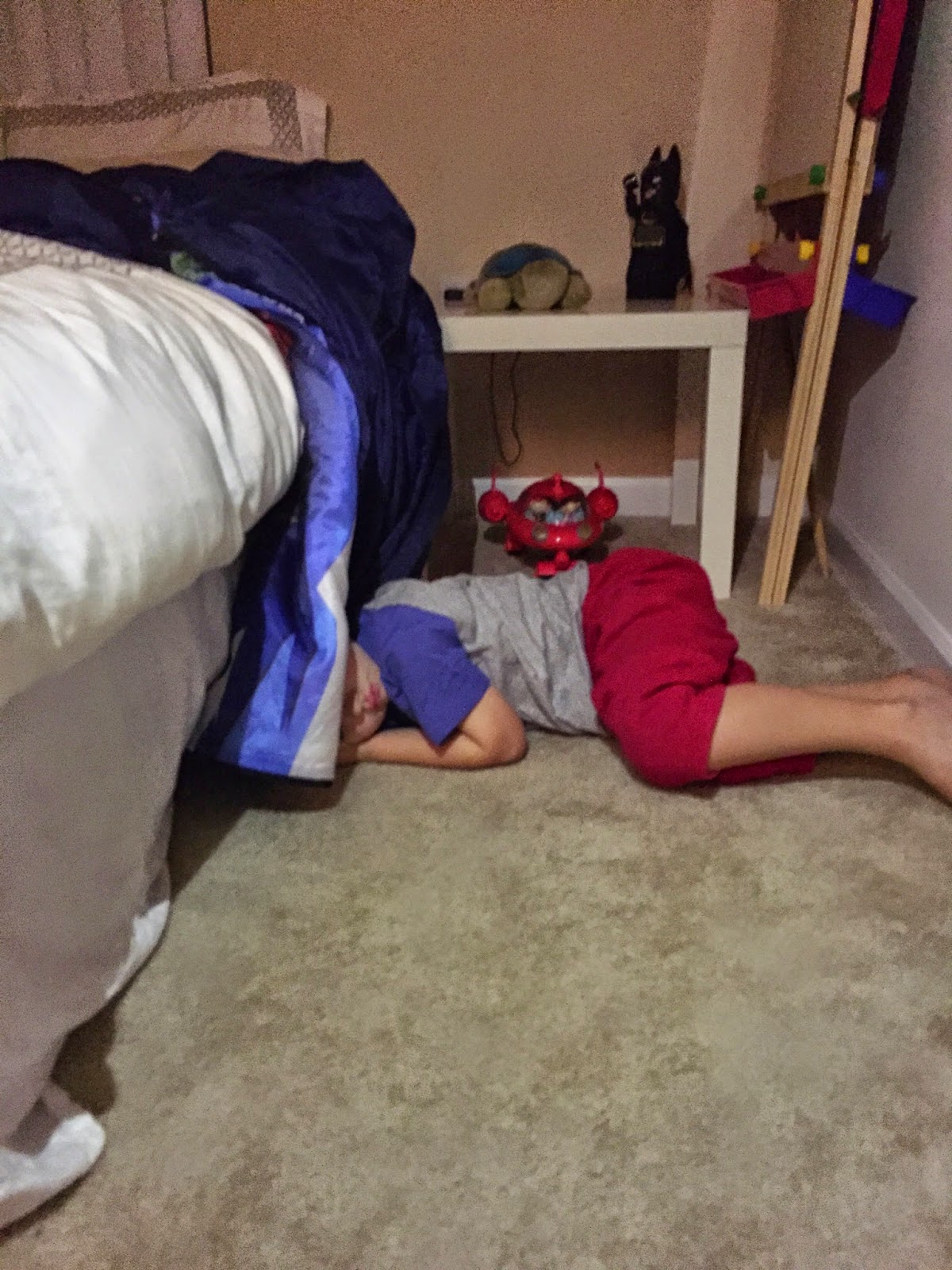 It sure is hard being four!