It didn't start out this way, but Land's End is one of my favorite places in our area. It is the perfect don't-have-any-plans/what-should-we-do/the-weather-is-nice-let's-go-for-a-walk type of place. 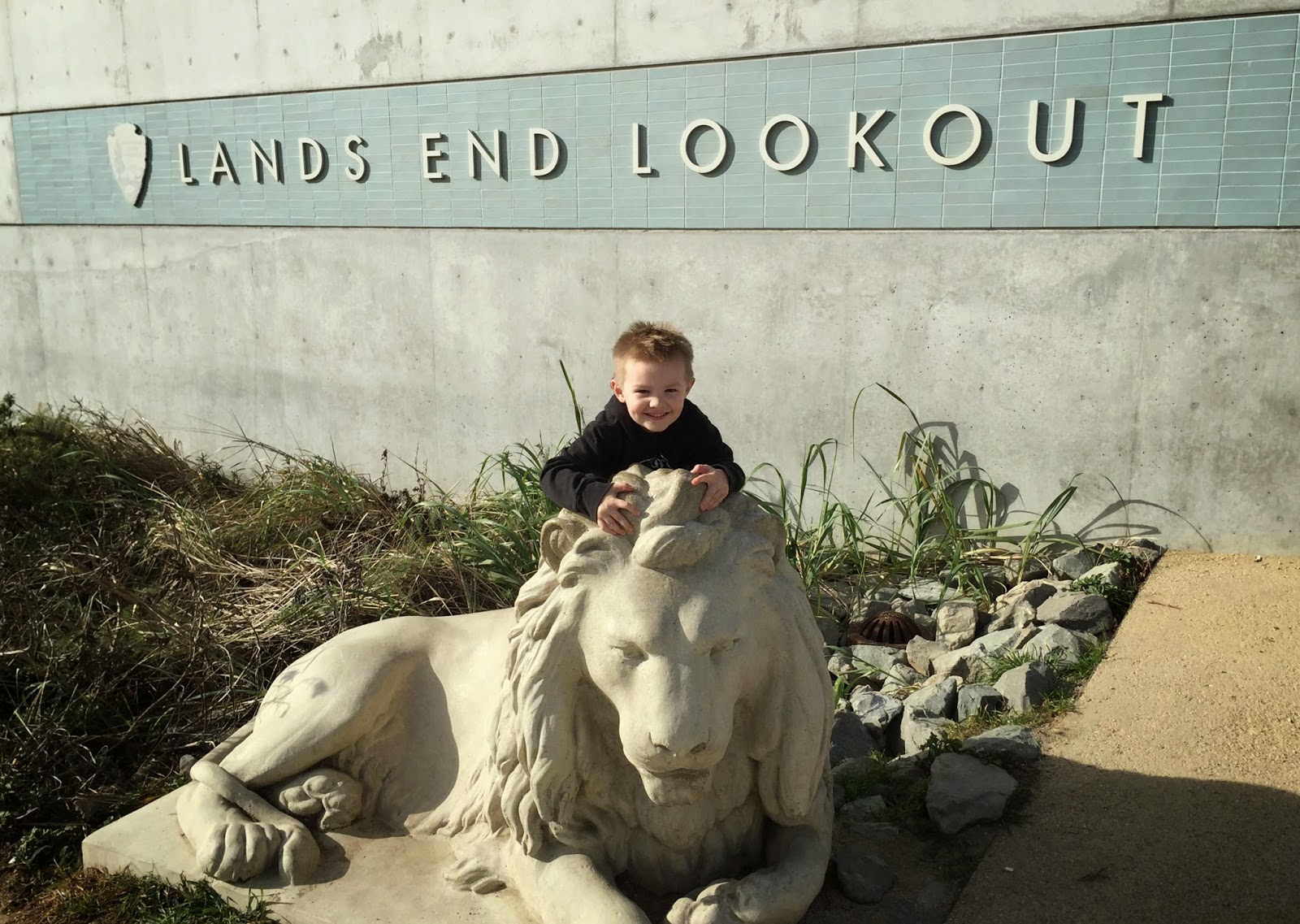 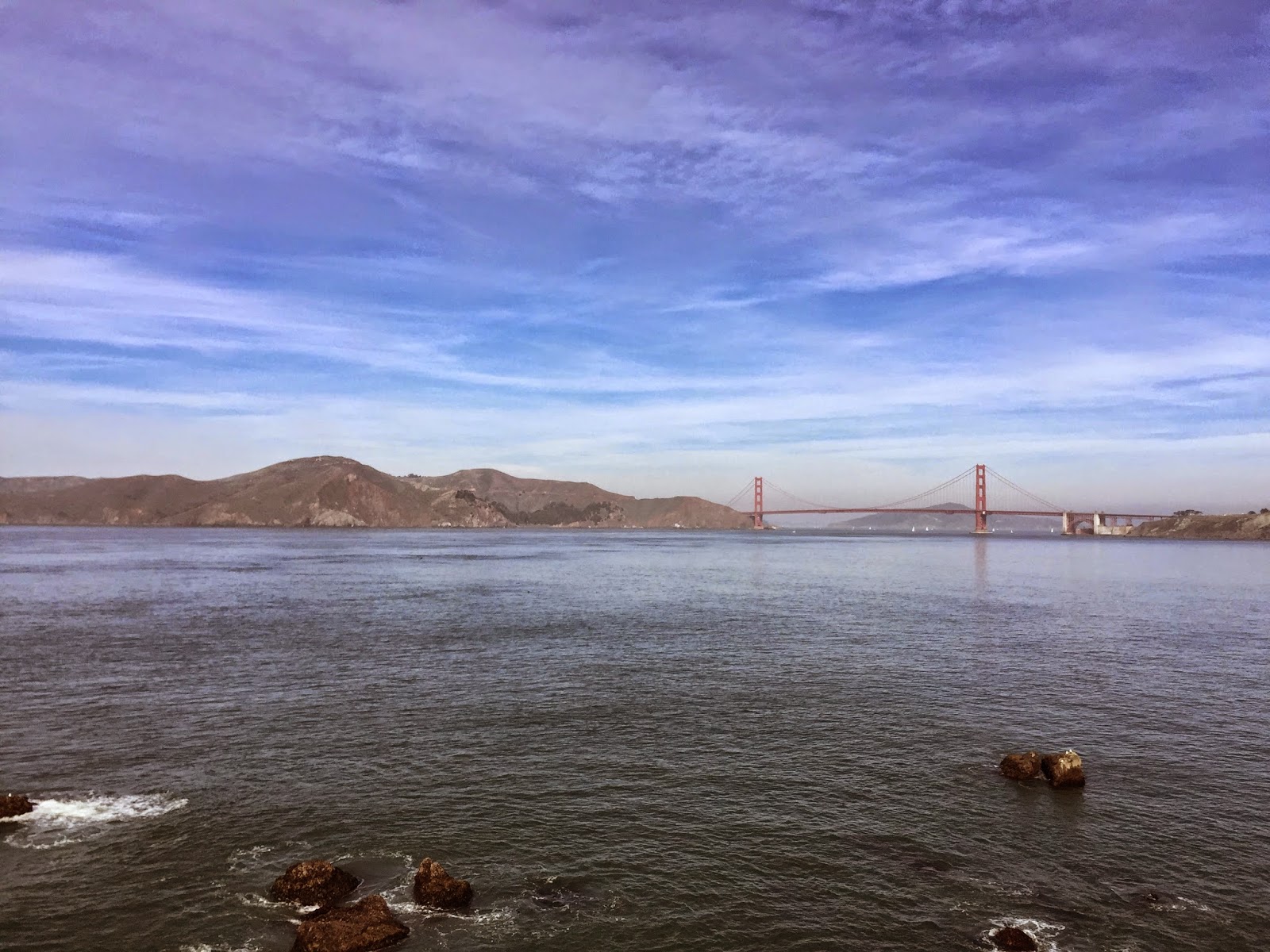 First, Land's End is about a 20 minute drive from our house on via the Great Highway. It's a GREAT drive along Lake Merced and Ocean Beach. Compared to the awful traffic of getting to Marin and the hour or so wasted at stoplights that are not in sync (something San Francisco needs desperately to adopt). The only redeeming factor of choosing the drive to Marin over Land's End is those butterflies I always get when we go across the Golden Gate Bridge. Of course, those butterflies also cost $6 in tolls. When time is limited, and/or we are not in the mood for the traffic, Land's End wins hands down. It's a peaceful park with multiple trails zig-zagging all along the coast. And it goes without saying, stunning views. 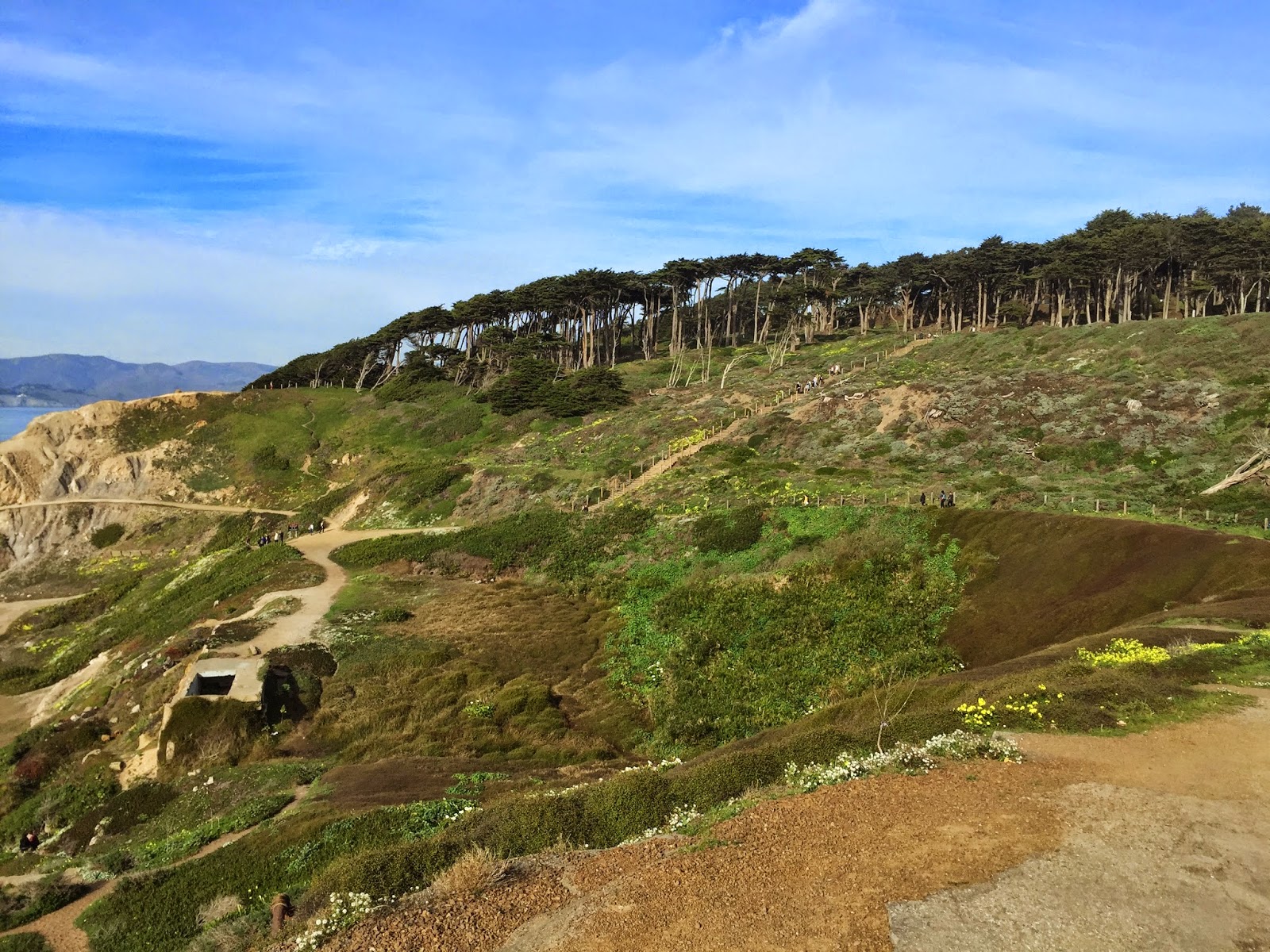 Another thing I love about Land's End is the Sutro Baths. Back when San Francisco was becoming a go-to city there was a big push to bring people from the city to the Land's End area and introduce them to the beautiful coast. A railroad was built to easily shuttle people to this playland of sorts. In 1896 a vast pool facility was built by the former Mayor which included the world's largest indoor pool. Also included was an amphitheater, museum, and ice skating rink. In 1966 a fire destroyed what was left of this once grand indoor pool facility. What remains now is only the foundations. 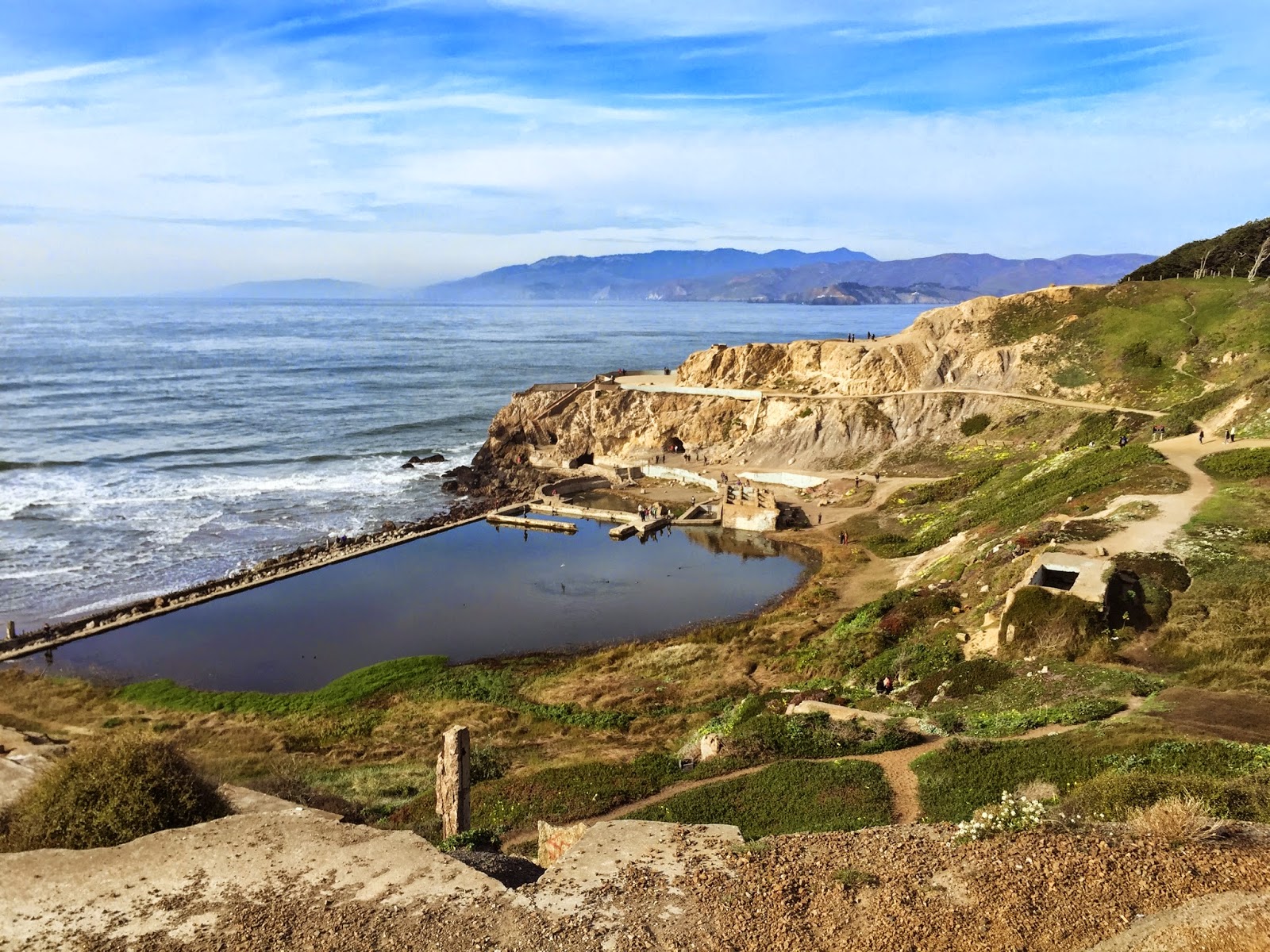 Today, the  area is a spectacular setting for what could be the ruins of any other early civilization in Europe. The difference? You can walk all around and along them, you can go below and hang out on the beach or you can stand above and gaze out at them from the visitors center and cafe (more on that later!). It's strange, intriguing, and beautiful all at once. Truth be told, anything against this backdrop is beautiful. 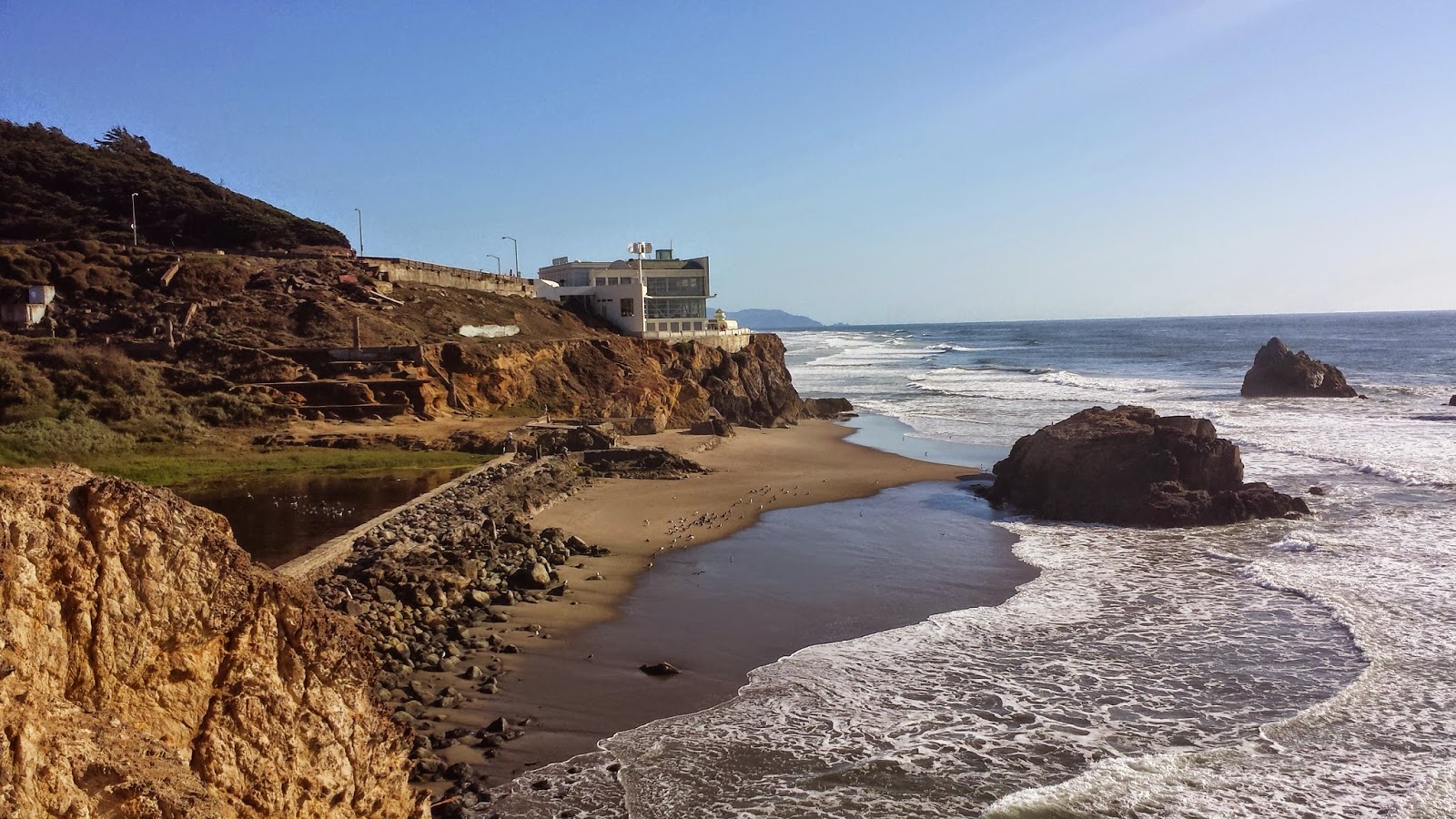 That white building is the Cliff House restaurant, a bucket list item. As you walk around the area of the Sutro Baths you can head just to the left and spend some time watching the waves crash along rocks on a large lookout. We've spent plenty of time here while Adam takes pictures and Landon rides around on his bike or climbs rocks. 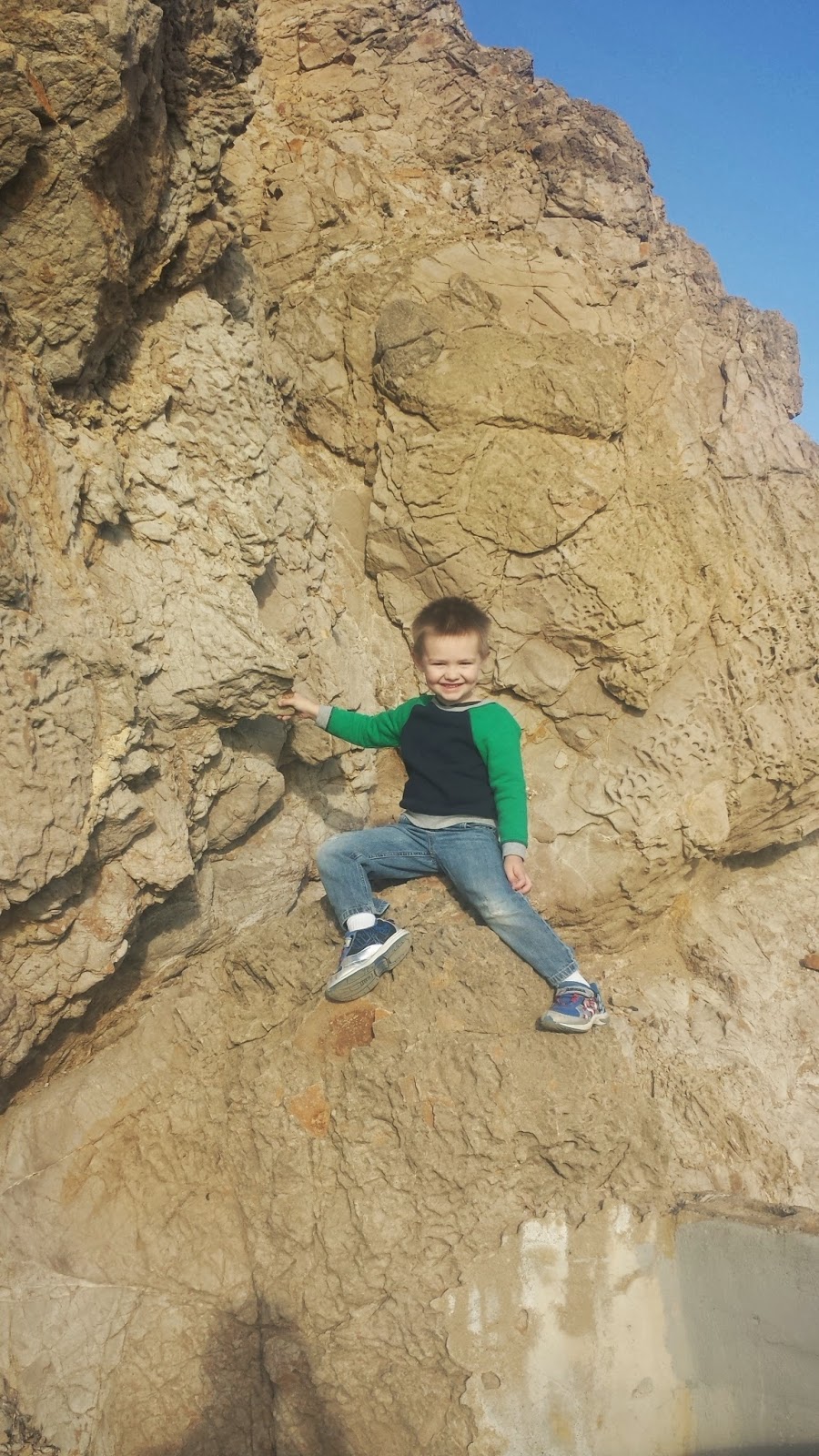 Lovers sometimes climb over the barrier and sit together on the rocks. Which would be tempting were it not for a daredevil squirmy kid as part of our package. We've seen dolphins not far from the shore and although we were not on the lookout when we saw it, we spotted a whale a few weeks ago too. As you can imagine, the whale was drawing quite a crowd as it seemed to be playing with no intention of leaving the area right away. We watched it splash around from above at the visitors center, but the people watching from this lookout must have an amazing view as the whale couldn't have been more than 100 feet out. For that reason alone, I will be sure to take my binoculars next time we visit. 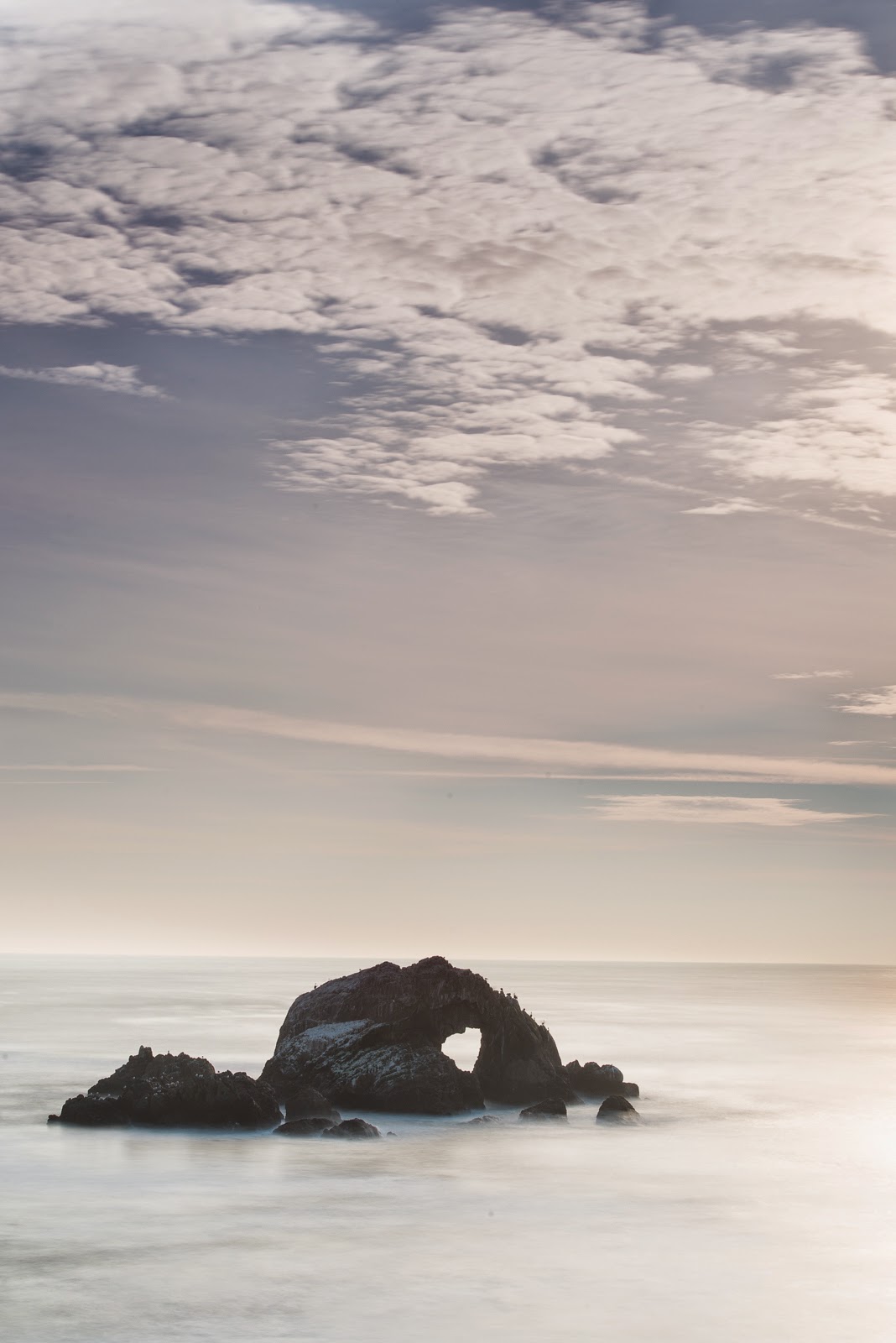 Once Adam finishes taking pictures, we usually head up the stairs for a nice stroll along the coastal trail. On the left, is stunning views of the Marin Headlands. At first, the Golden Gate bridge is barely visible, but as you continue down the path, it becomes more and more apparent with a number of areas dedicated to grand unobstructed views. 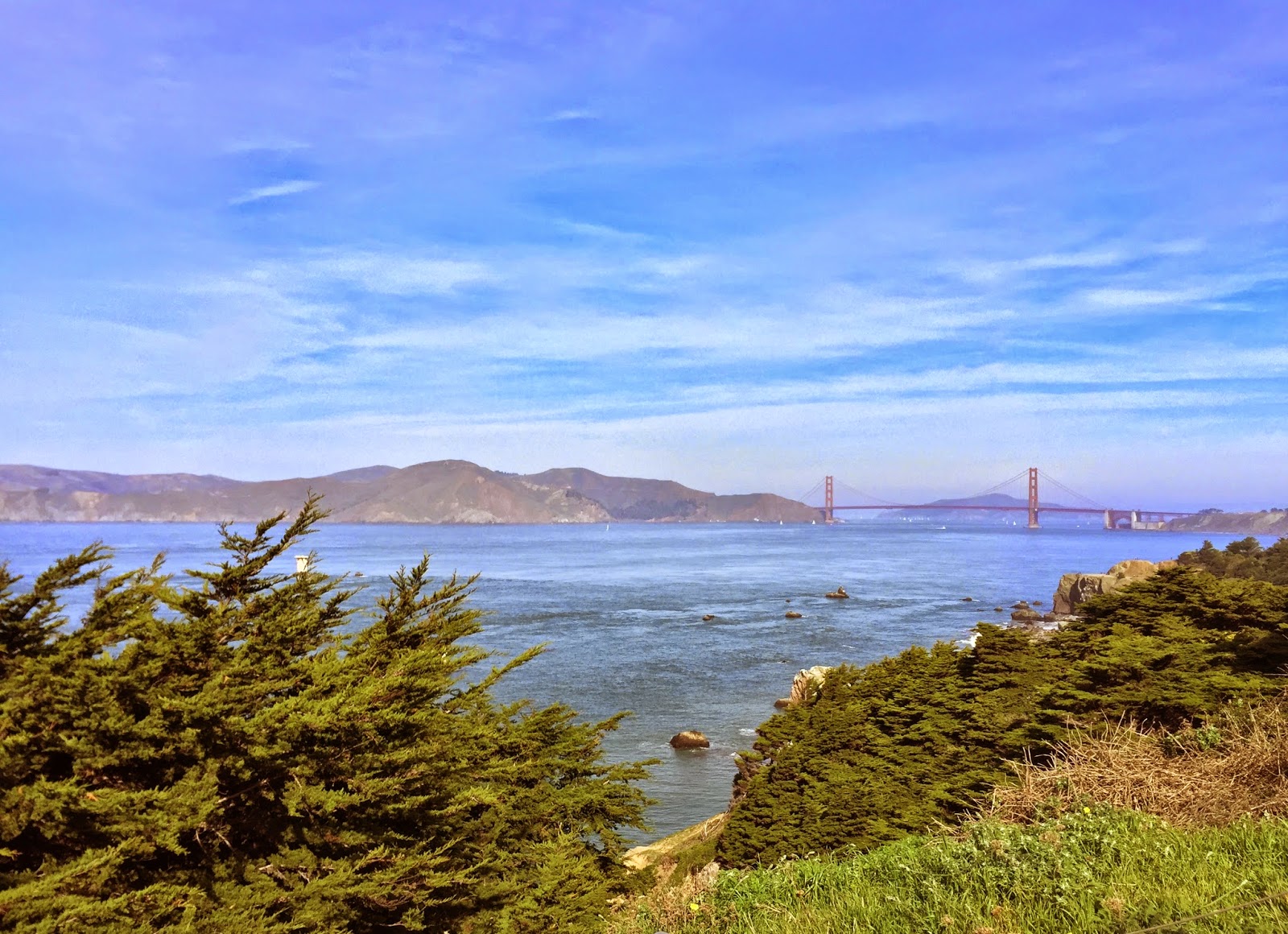 As you walk down the trail, the right side of your path is littered with these amazing cypress trees. I am really starting to love trees and these are some of my favorite in the area. 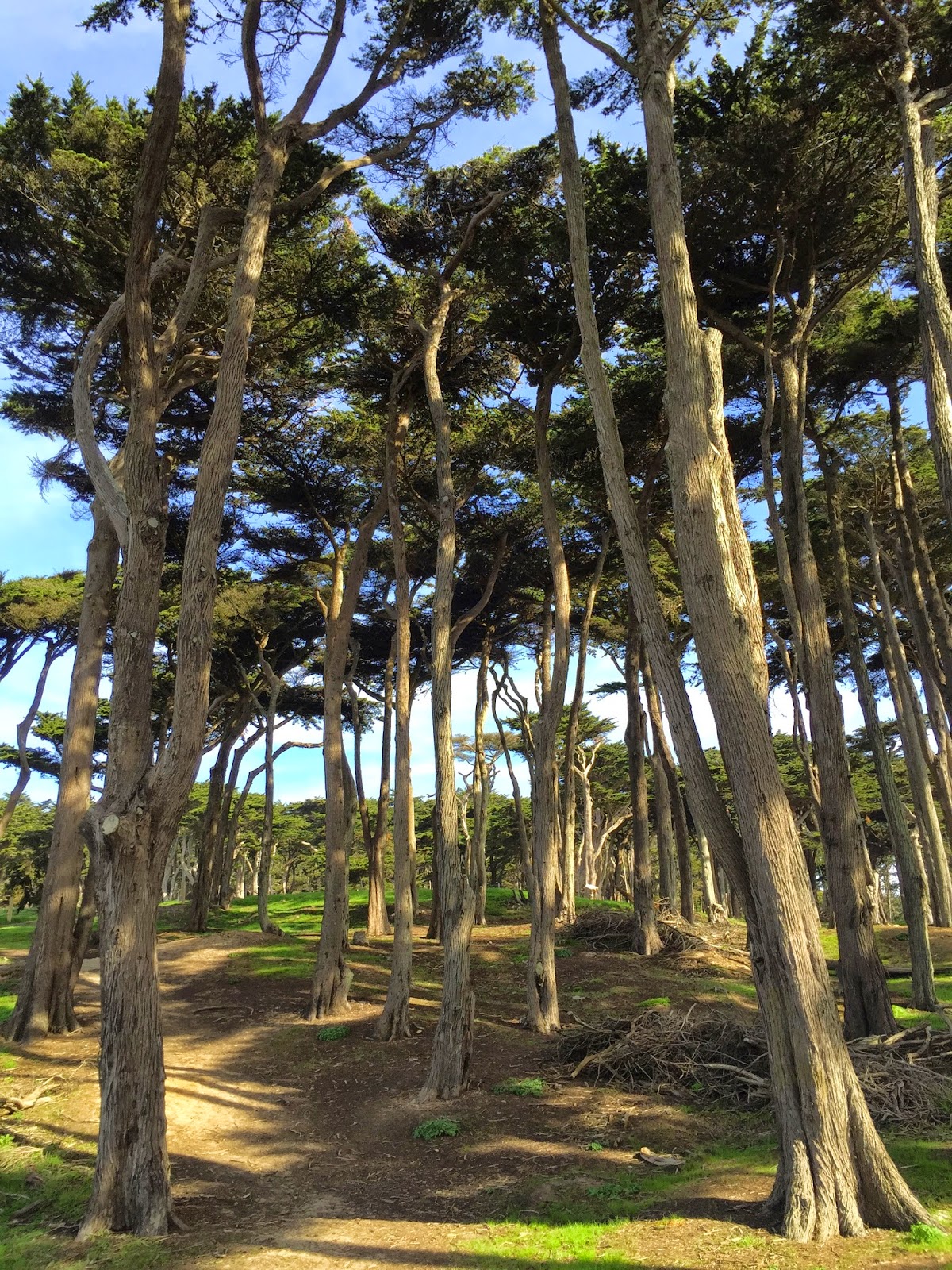 The Coastal Path is mainly a wide, paved path. Last time we went, Landon enjoyed riding his bike while we walked along. It's a busy place with lots of people walking, running, or biking through the area, but it never feels overly crowded. It's amazing how well the parks in San Francisco can handle the large numbers of people that utilize them. 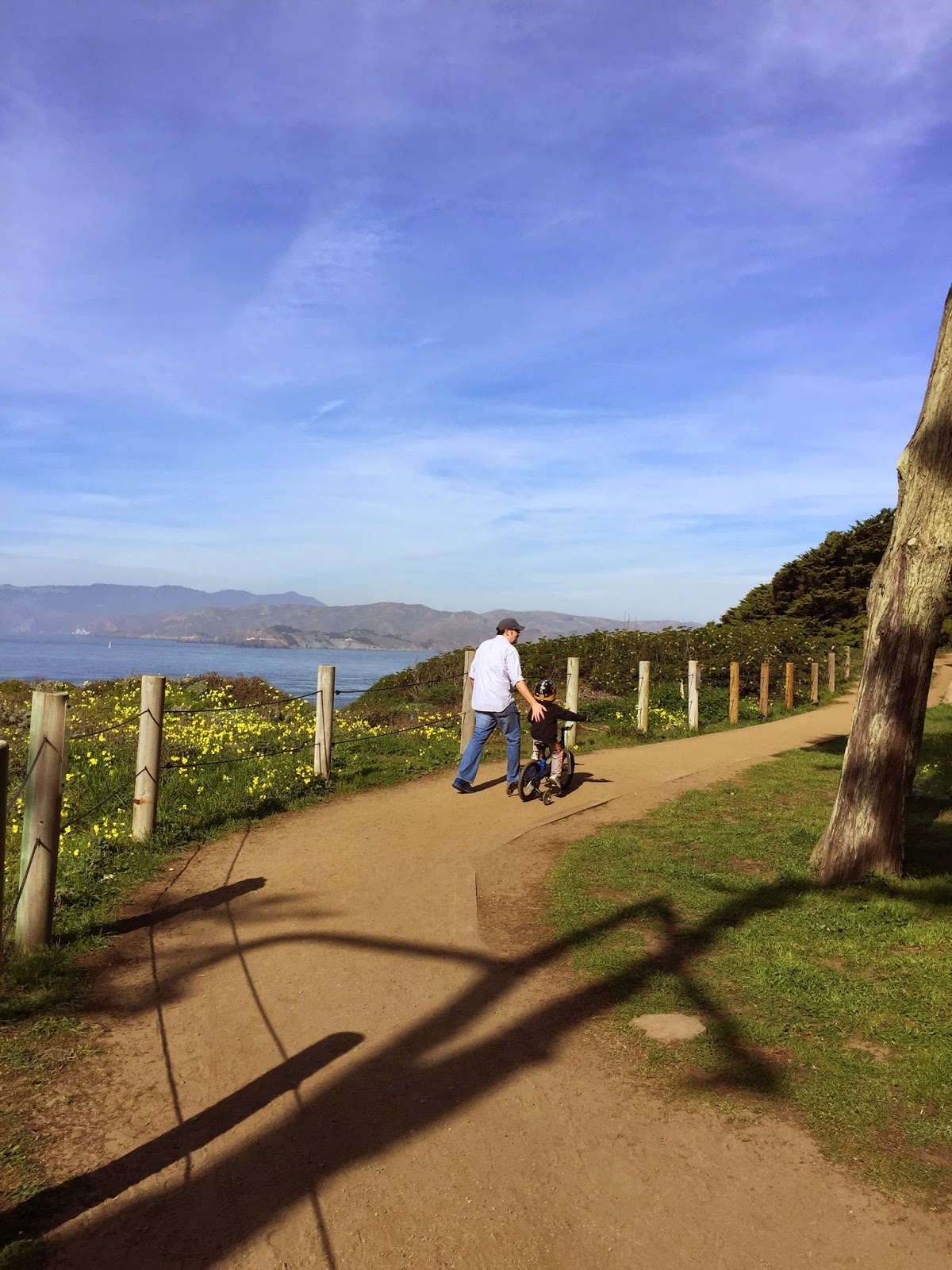 You can continue on the Coastal trail for a good distance, but we have only gone as far as the intersection to the Mile Rock Staircase. Here, a steep, but short staircase takes you down a path the opens up to a beautiful vista and a fun rock labyrinth on some prime coastal front real estate. 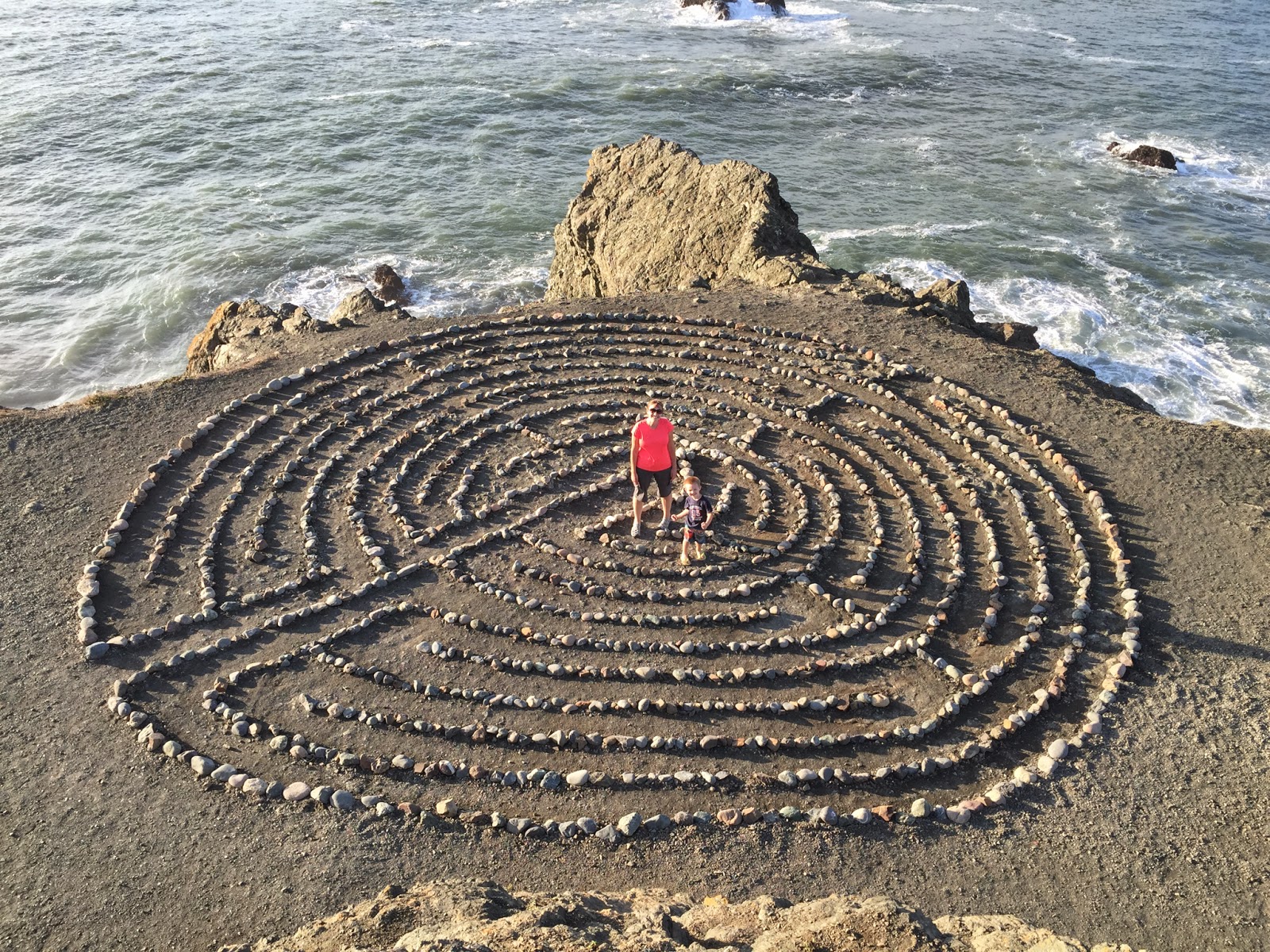 My friend, Marty, took this picture of Landon and me on the labyrinth the first time we visited. I had seen it before in photographs, but was surprised at just how large it actually was. Landon loves walking it and trying to get through it without crossing any rocks. It's a nice little distraction for him which gives me time to just enjoy the scenery. 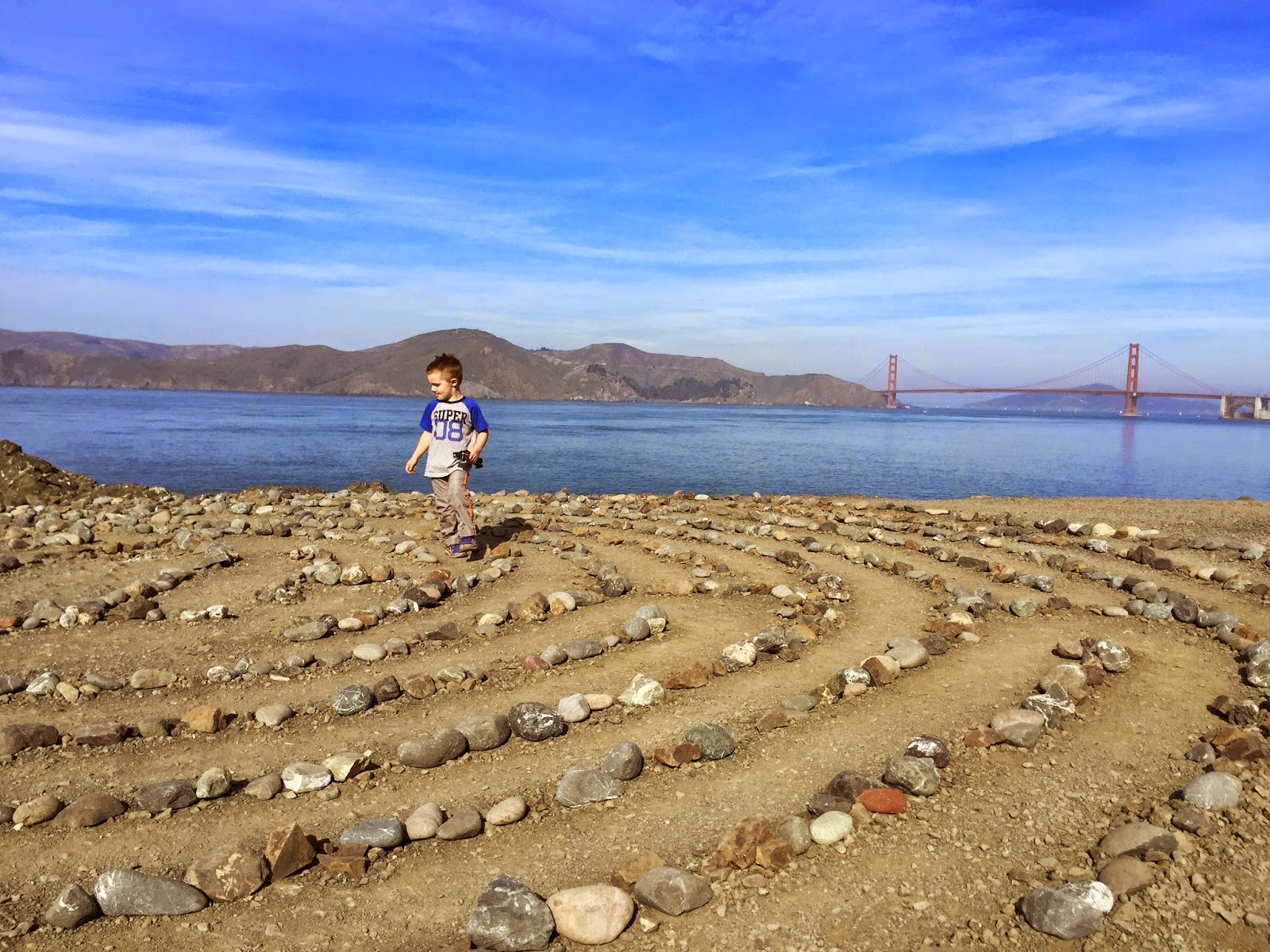 Like I said, you can go a lot further on the Coastal Trail. There is a lot more of Land's End that we still haven't explored. One item worth a quick mention is the USS San Francisco Memorial. I plan to do a separate post on the memorial and other military installations in the parks at some point. Since I didn't take any pictures when we visited it, all I will say for now is to be sure to give it 10 minutes of your time when you go. It's a great memorial. It is located in the left hand corner of the higher of the two main parking lots.

And while it is all enjoyable, our favorite thing to do after exploring is to return to the visitor center cafe for some treats. Depending on the weather, the famous San Francisco treat It's-It ice cream sandwich or yummy hot chocolate is my recommendation. The cafe has practically a full menu for whatever suits your fancy, that is just mine. Once Landon has made the tough decision between chocolate milk and apple juice, we pick a spot on the ledge overlooking the Sutro Baths and enjoy the view for a bit. 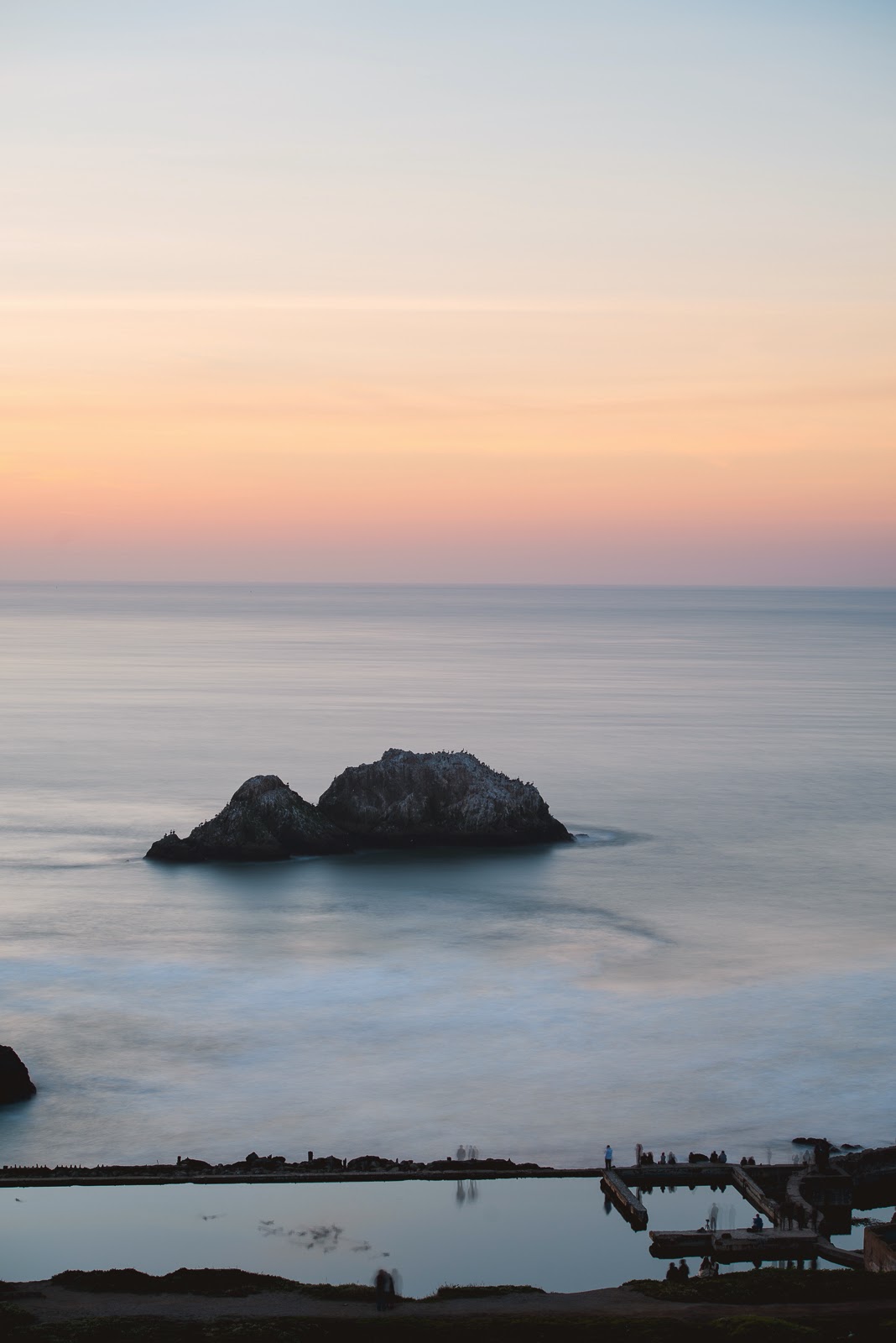 Did I mention yet what a perfect spot this is for the sunset? A few weeks ago we happened to spend the afternoon at Land's End and stuck around for the sunset. Sitting on the ledge for almost an hour, we were ALL memorized by the fading light and the colors of the sky. Adam was able to capture the beauty perfectly in the picture below. Land's End is a beautiful park worth any visit, anytime, but something stunning happens here as the sun sets the sky on fire. It's easy to see why it has quickly become one of our favorite places. 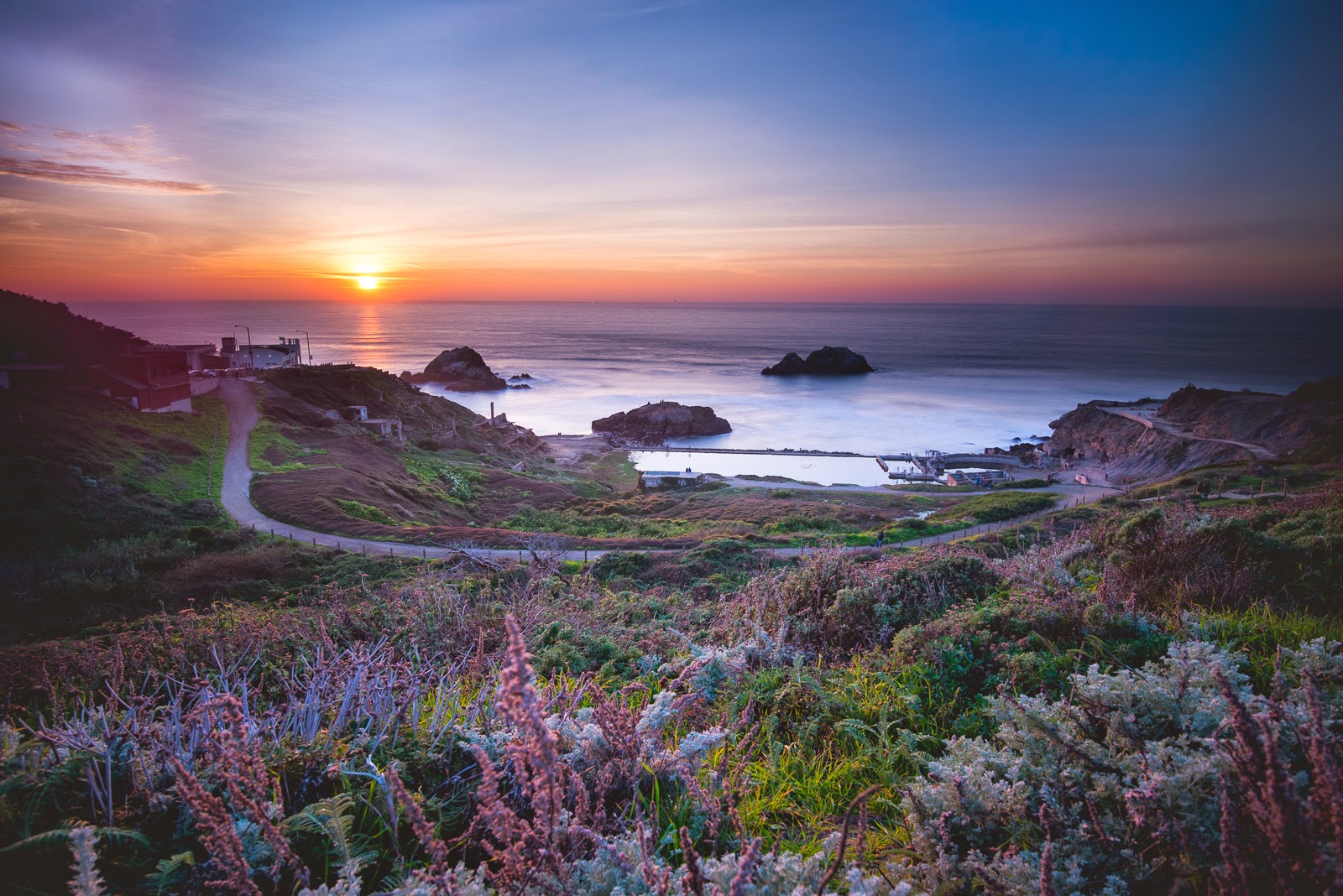