Overcoming: Lessons of the Past Four Years

A few nights ago, while Adam was away on business, he posted a timehop message on facebook. I normally think those posts are silly, but this one affected me a little differently. 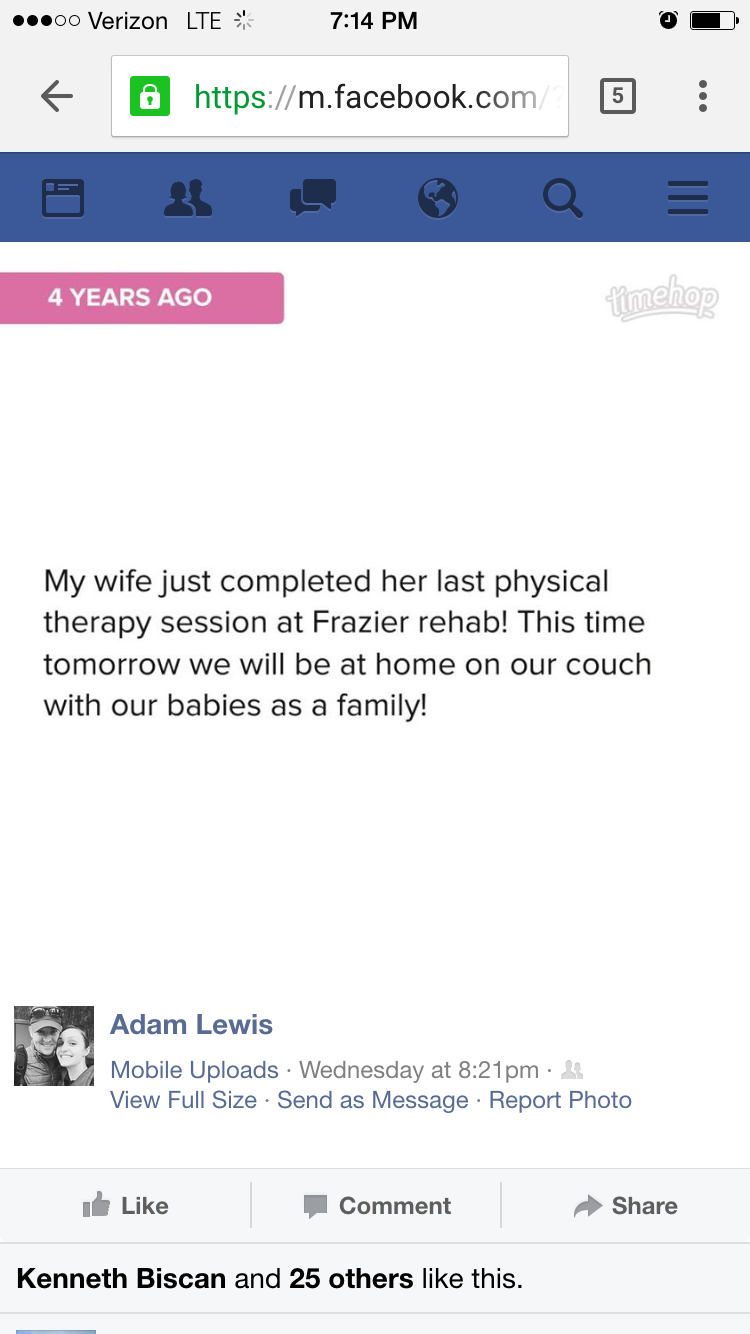 It always hits around Landon's birthday and lingers through February that there will always be a gap of time in my life where huge events were taking place, despite my inability to be part of them. Of course, the whole experience is never far from my mind, but reading that it was just about four years to the day from when I left the hospital really put me right back in that time.

There are a few things that really stick out to me about the day I left Frazier Rehab. First, I accomplished my goal and walked out of the hospital that day. It wasn't easy. As a matter of fact, that short walk was exhausting, but I was so damn proud of myself for doing it without a wheelchair or walker or someone guiding me. Secondly, that was the day I really became a Mom. About 30 minutes after we arrived home, my mother-in-law brought Landon to our house so we could all be a family for the first time. It was something I really wanted, to be home and be with my Son, for us to finally be a family, but caring for a baby who was two months old was so hard given my physical condition. I remember that first day, trying to walk with him in my arms from my bedroom to his room to change his diaper. I remember when I got him onto his changing pad, I was exhausted and sweating and briefly thought maybe I couldn't do it after all. Thirdly, how physically and emotionally painful life was back then. I know it wasn't the first day I was home, but I remember a day or two later when I decided to try and take a shower at home. Until then, Adam had been bathing me at the hospital while I sat on a stool. So we took off all my bandages and I got into the shower and immediately started crying uncontrollably. I was terrified of the pain the water was going to cause when hitting my wound on my leg, I was scared to try and wash my c-section which was still open a bit, and I was convinced water might go into my tracheotomy. Instinctively, Adam jumped into the shower with all of his clothes to hold me and I continued to sob on him for a good five minutes. Taking a shower, going to the bathroom, combing my hair... These wee all excruciatingly painful and near impossible in those early days at home. Not only that, but emotionally, it was absolutely overwhelming to the point that most of the time, I just had to stuff it all in a dark place and move on, otherwise it would consume me.

But as horrible as those first days were, it quickly got better. By the end of the next month, I wore heels (be them little ones) for Adam's grandfather's memorial and I remember feeling like myself a bit for the first time. The day all my wounds stop requiring dressings was one of the happiest days of my life and it wasn't too long until the only thing I needed to work on was regaining stamina and strength. In September 2012, only a year and half later, Adam and I traveled to Switzerland where I climbed all over mountains and hiked for hours. I was so proud of myself that entire trip and that I could keep up and was able to push myself to new limits. Had you told the Angela of four years ago that four years later, I would have been hiking along on the highest peak in the bay area, I would have never believed you, yet that is exactly how I spent this strange anniversary of sorts. 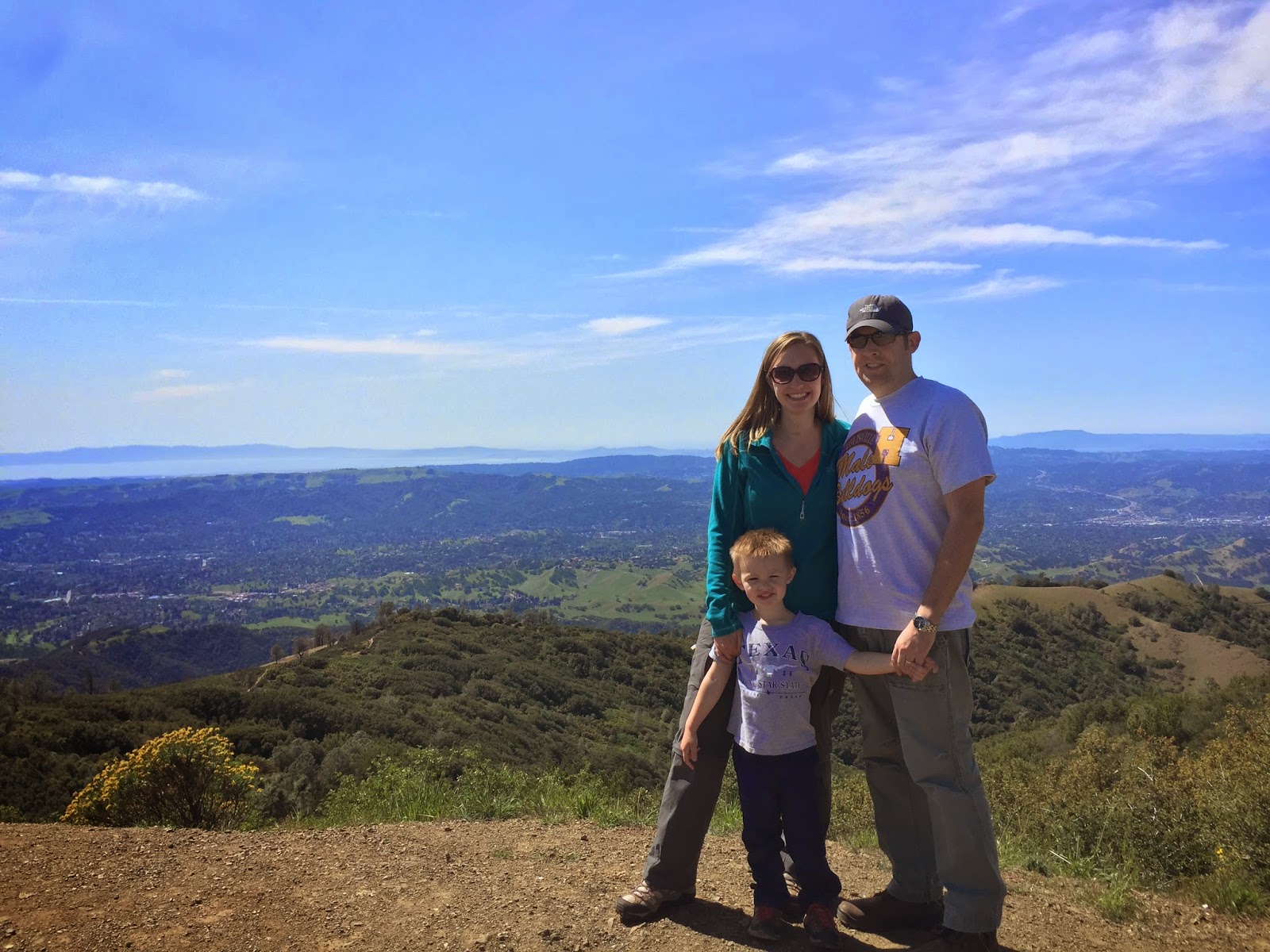 When I think to that day, I also cannot help but think about how much I've changed my life and how far I've come in the last four years. In many ways, I didn't start truly living until I almost didn't live. How ironic, right? It's no doubt that this is the blessing from all the tragedy. In the few days I've had to reflect on that day four years ago, I've thought of a number of things that I've learned, and I mean really learned in my soul, since then and how greatly my life has changed. In honor of these last four years, and the strides we've made, I thought I would share them with you. They are as follows...

The Beatles were right, all you need is love. It is cliche, but it is true. Nothing else matters in life but love. Real, true love between two people is magical, but love comes in all sorts of ways and from all sorts of people. In children, in family, in friends, in pets, and even in strangers. In the four years since I left the hospital, we've sold our house and almost every worldly possession. We drove across the country last year with everything we owned in an 8x12 trailer. And you know what? I was the happiest I have ever been. Having almost nothing, allowed me to see things differently. Now the idea of a big house with lots of possessions feels to me more of a burden than a blessing. I have learned that material things are the least important things we can posses in this life. 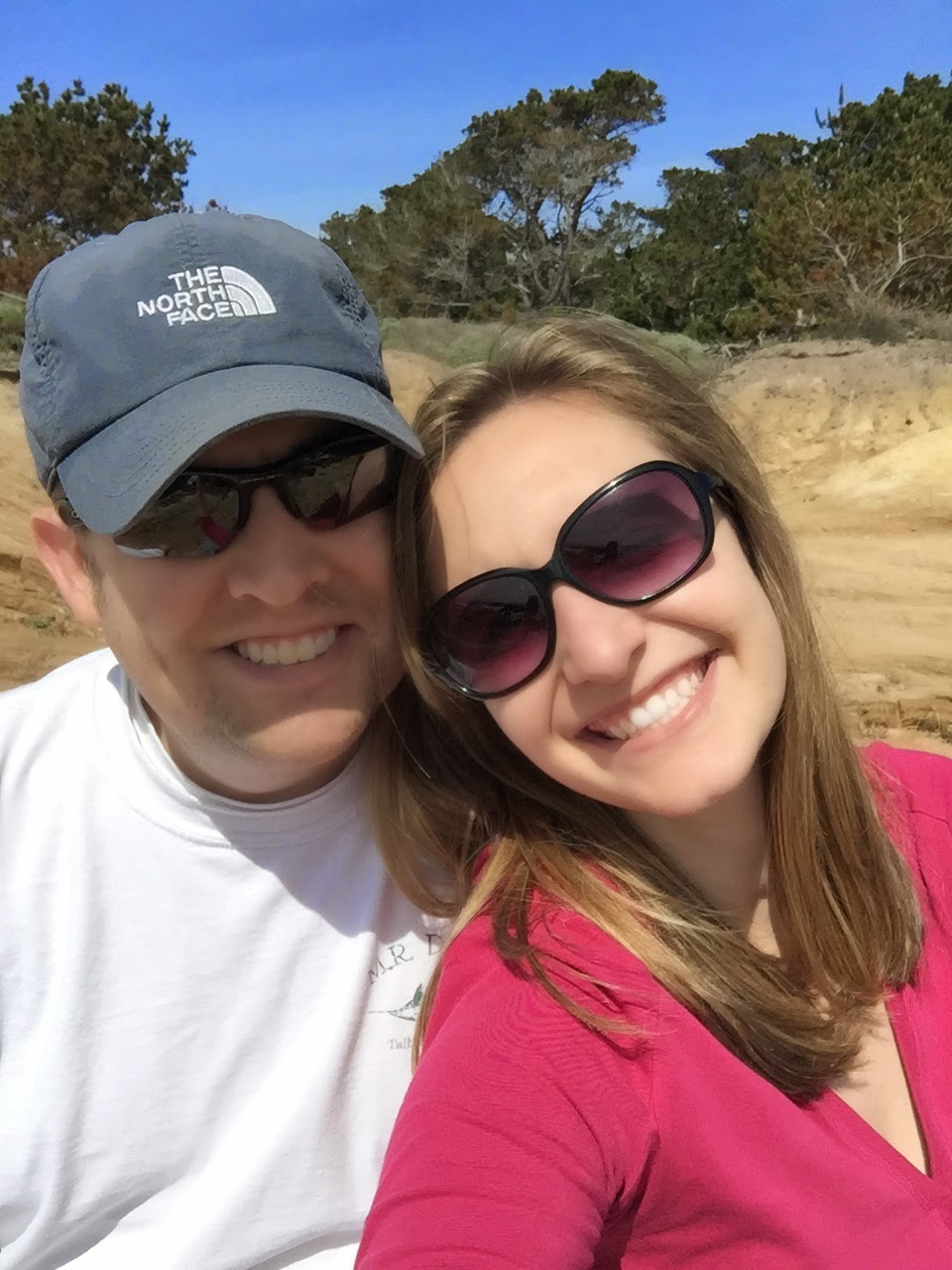 If you don't like something, change it. Yes it is that easy! If there is something in your life you don't like, the problem is simple; It's you! I know it is a hard truth, but there is almost nothing in this life you don't have the control to change. It might take a lot of hard work or a lot of sacrificing, but 99% of the time, it is possible and you are in the one in the drivers seat. Determination is one of the greatest qualities you can posses. I have learned that if you want something badly enough, determination will get you there and the only person stopping yourself is the person in the mirror.

Enjoy, the little things in life. It isn't something that happened immediately from leaving the hospital, but over the years nothing has brought me more deep down, heart filling happiness than some of the most small, mundane daily activities.  For example, every day that I get to pass these four palm trees on an alternative route home, they make me feel so incredible happy. I don't know what it is, but these palm trees are super tall and just kind of stick out in the middle of this neighborhood and whenever I see them, I can't help but smile. In the same way, we had a wonderful day last Saturday. We went to a beautiful state reserve on the coast. We spent a glorious day walking all along the water, watching whales, otters, and other sea-life, playing on the beach, and enjoying the outdoors, but my favorite part of the day was even more simple than that. That morning, while getting ready, Adam and I were discussing our dreams from the night before. During that conversation, he made a little comment that was so honest, unexpected, and hilarious that I was laughing until I cried. Despite our amazing day, those few minutes in our bathroom that morning were my favorite part of the day. I have learned that the things that give me the most pure joy and happiness in this life, are the most minute. Or as Landon's fortune cookie said tonight... 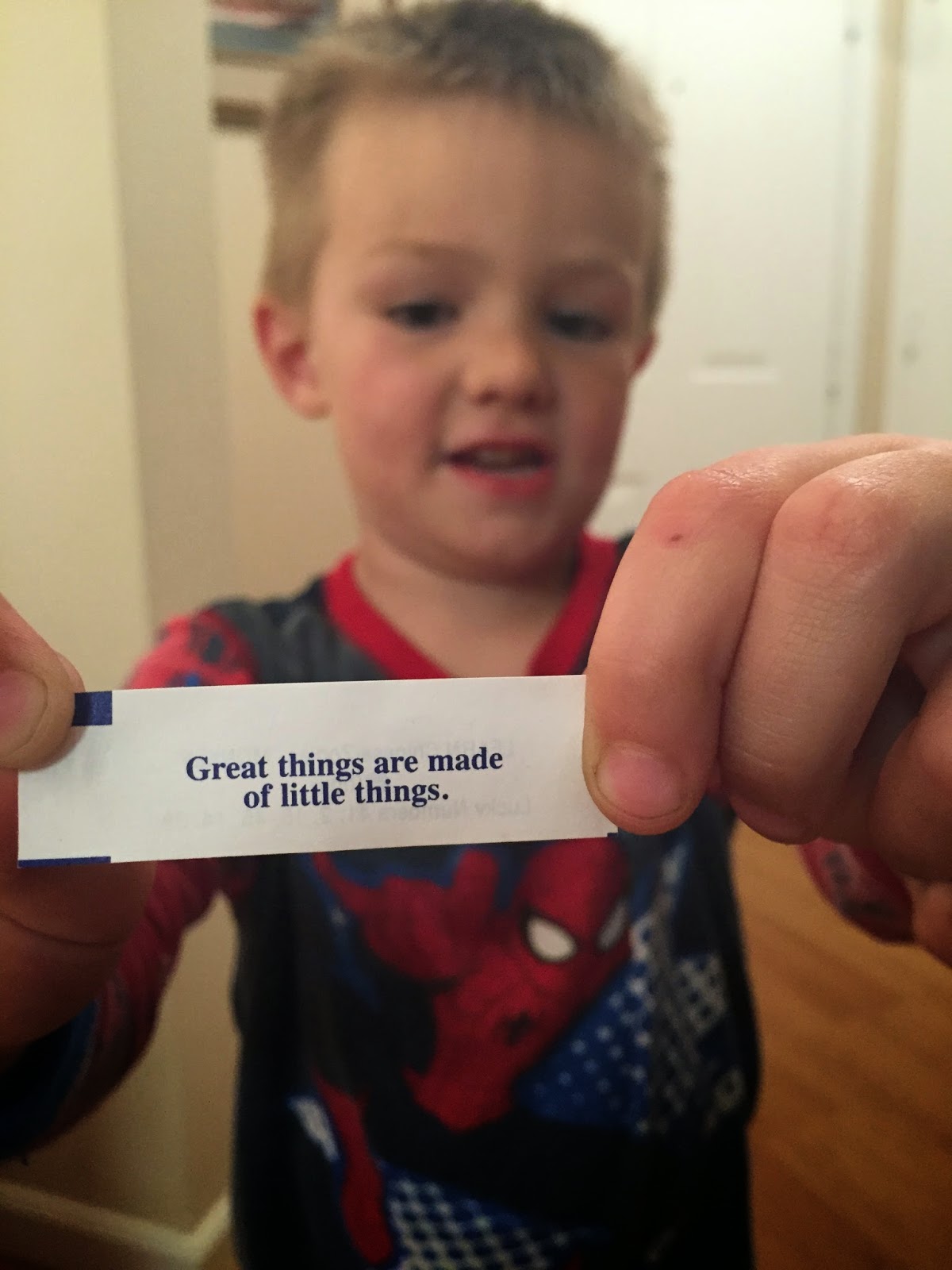 Don't waste too much time, wasting time. I'll admit I am guilty of wasting time, but I've learned over the years that wasting a little bit of time everyday ends up building very quickly and time is one thing we can never recoup. So what is wasting time? I think it's different for everyone, but I think universally, anything that doesn't make you happier or better in some way is a waste of time. The biggest culprit is TV. So many people watch hours of TV a day and I think if most people were honest, they would admit it doesn't make them any better or even happier at the end of the night. For Lent this year, I did something a little different and gave up TV (I usually try to do something instead). My intentions were to get back on track with reading the bible and learn to spend more quality time with my family at night. I also needed to study for my brokerage exam which I didn't want to try and fit in on top of all my shows. The outcome? I play games with my son at least three nights a week now. I've studied more than I ever would have with the TV on and, at the end of the night, I go to bed feeling accomplished and proud of how I've spent my day, not a little let down. I know I will watch TV again at some point, but this absence as really allowed me to focus on how many other ways I can best utilize my free time and all the great quality time I was negating in lieu of TV. So unless I get sick, I'm not sure I will ever catch back up with Nashville, Scandal, or Revenge and I really don't even care anymore what is going on in their make believe lives. Instead, I would rather live my life. I have learned that I am not nearly as afraid of dying as I am of wasting the time I have here on Earth.

The key to happiness is true gratitude. If I had only one wish, I would wish that everyone would be bestowed the gift of gratitude. In that way, everyone in the world could be happy, because happiness is the most fulfilling thing in life. And it really is a gift to be grateful for every second of every day. Expectations are toxic, the less we expect, the more grateful we can be when we do receive. This, more than any other concept, I am trying to teach and show this to Landon, but it is hard. I started by ridding him of the word "need". He would try to say, I "need" a toy or I "need" candy. Whenever he said that, I would make him recite the three things he actually needed...food, water, and shelter. Eventually, he learned to say 'want' instead of 'need' and then I moved on teaching him about expectations  and how we don't always get what we want. Well that was all fine and good until  one day he asked "Mom, what is shelter?" I couldn't help but laugh although I felt my well taught lesson was a little worthless. Still, trying to teach a four year old the different between wants and needs is something some 30 year olds still need a lesson in. The less we expect, the more grateful we become for what we do have and, in turn, the happier we become. I have learned that nothing is promised. That tomorrow is not guaranteed and that every second of every is a gift. A gift for which, I am most grateful! 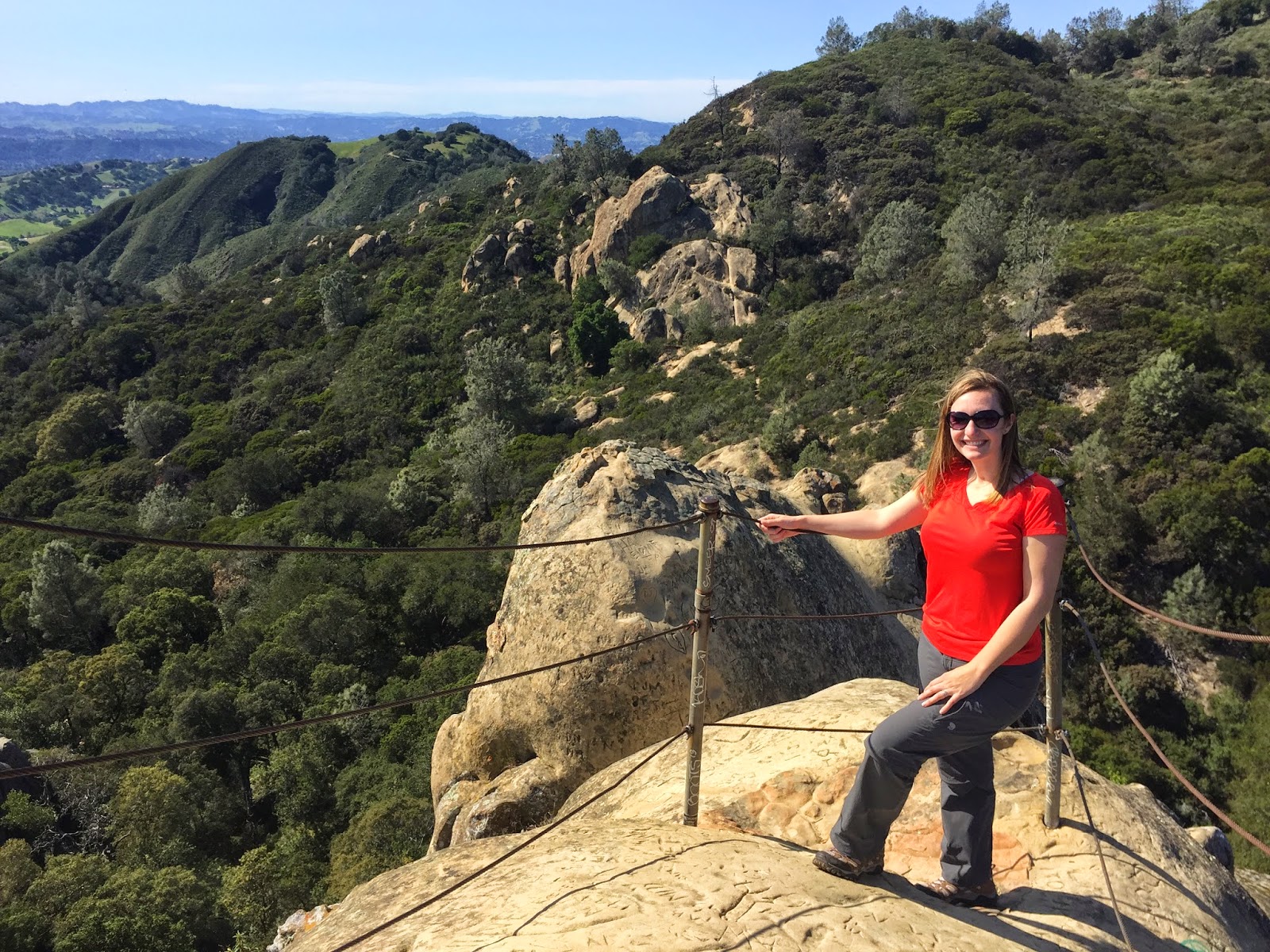