A Weekend Trip Along the Coast

This weekend was a long awaited celebration of sorts. The first four months of this year consisted of busy season for Adam and tons of studying for the brokerage exam for myself (which I unofically passed!). Between working and more working, we managed to sneak in a fun thing or two most weekends but, overall, we were just working hard and waiting for it all to be over. And now it is! To celebrate, we spent the weekend driving down the Pacific Coast Highway with some camping, kayaking, watching all kinds of wildlife, playing on beach, and, most importantly, enjoying lots of very much needed quality time together as a family.

We started off early Saturday morning and started down the scenic Pacific Coast Highway just outside of Monterey. Here, we began our breathtaking drive towards our first stop, McWay Falls. Not far past Big Sur, this waterfall, which pours into the ocean, is small yet stunning and is one of the many things I had wanted to visit before we moved to California. A short, well marked hike takes you and the other 50 or so tourists along the edge of a bluff and across a cove for a view of this beauty. 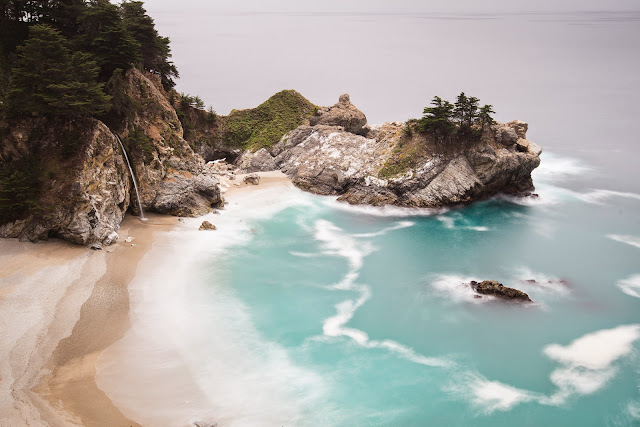 If any place along Hwy 1 captures the beauty of this area, it might be McWay Falls. After we were done stretching our legs and enjoying the view, we hopped back in the car and entered uncharted territory along the road. Since we hadn't driven this stretch yet, the views were now new and even more exciting and our stops became frequent. At one point, I thought I could see some movement in the water and, as if reading my mind, Adam pulled off at the next turnoff. We got out of the car and we could clearly see a number of large mammals out about 3,000 ft from the coast. Large, like whales, a large dorsal fin was clearly visible and before I let myself jump to conclusions, another watcher corrected my guess of dolphins by telling us they were in fact killer whales. 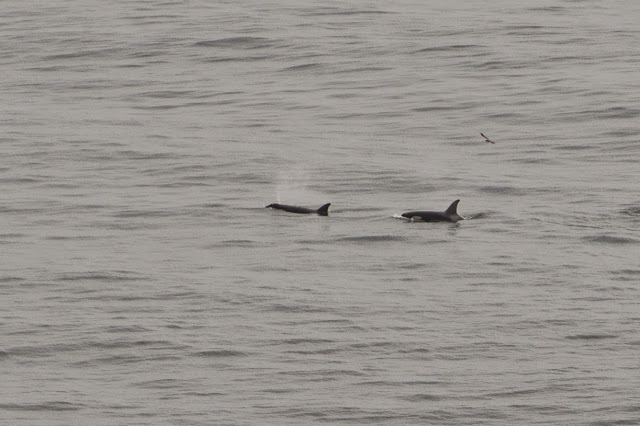 Ever since I was young, I have LOVED killer whales. My Dad adopted a killer whale named Princesses Angeline for me as a young child and I would receive monthly updates on her whereabouts in the Pacific. I was fascinated by it. In Maui, we saw humpbacks up close and personal, but that excitement was nothing compared to being about to gaze at these black and white beasts from the coast. We counted over 10 in total, in what seemed like 2 pods. A photographer informed us they had just made a kill which explained why they were so close to the shore and staying relatively put. It was hard to get a decent picture given the distance and their quick breaks above water, but we sat on the edge of the land and watched them through our binoculars for a good 30 minutes. It was magical and a true highlight for me. Although I could have stayed there all day, we eventually made our way back to the car and onto the road.

Around 3pm we passed a nicely situated restaurant and lodge and decided to stop there for lunch. In an effort to not spend a fortune, I split the burger with Landon which caused me to miss out on their fish & chips (something I later noticed was a big mistake). Despite my error, the food was wonderful and the views were spectacular. As much as I've read about Hwy 1, I've never read any recommendations for Lucia Lodge, but I know we will be going back for some fish and chips especially! 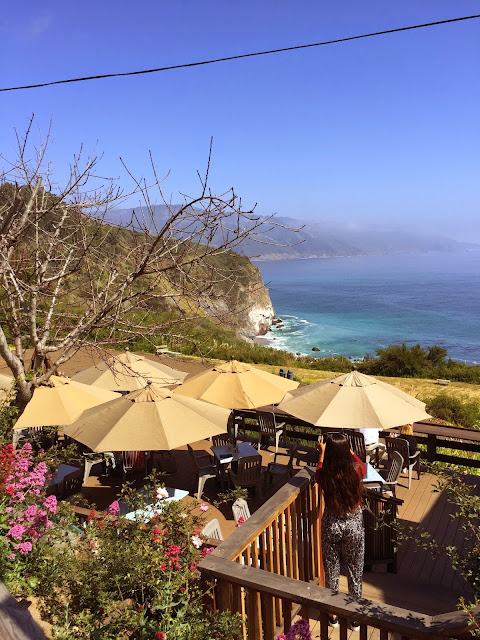 At this point, we decided to turn around and start heading to our camp site back in Santa Cruz. As we were headed back North, we noticed a number of large black birds riding the air currents just above the road. We've been anxious to get our first glimpse of a California Condor, the largest bird in North America. They were almost brought to extinction less than 30 years ago and today there are only about 400 in the wild which makes them one of the rarest birds in the world. At one point, we pulled over thinking we saw one overhead. After spying what we thought was our first one, we got back on the road and rounded a corner to find an actual one (the first was actually a turkey vulture) sitting on a rock straight ahead of us. We quickly pulled over, which started a  huge trend, and watched with a number of other people until he flew away. 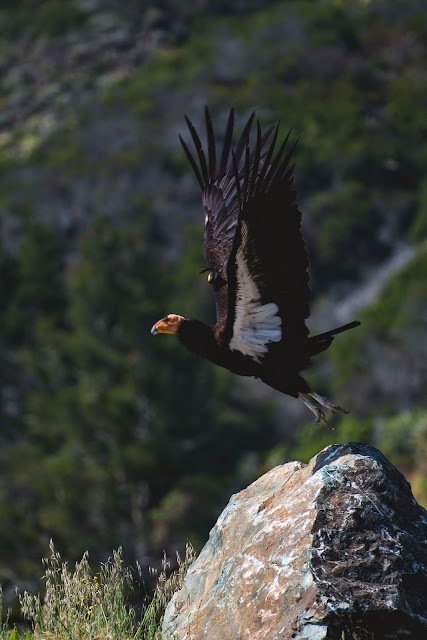 Not the worlds prettiest birds but their shear size is pretty amazing. Watching them glide effortlessly through the air with their delicate finger looking wings is mesmerizing. It was really neat to see them so close in the wild and not just one, but a number of them through out the day. 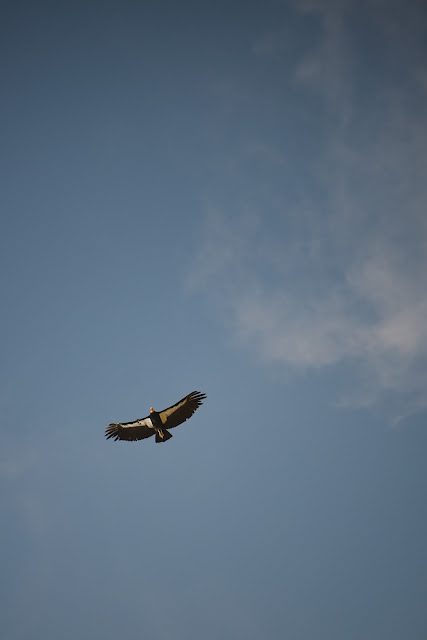 We continued on the road back towards Santa Cruz, stopping a few times for pictures. These sights never get old. 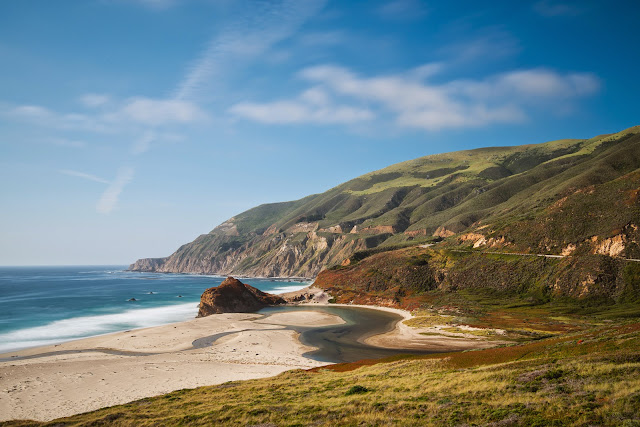 Not long before sunset, we made it to our camp site. One thing we've learned about California is how hard it is to camp. I dreamed of camping on the beach, but without 9 months of advanced planning, we ended up staying at a KOA for the first time. It wasn't really our ideal campsite, but it was a perfect place for Landon full of all kinds of activities for kids. 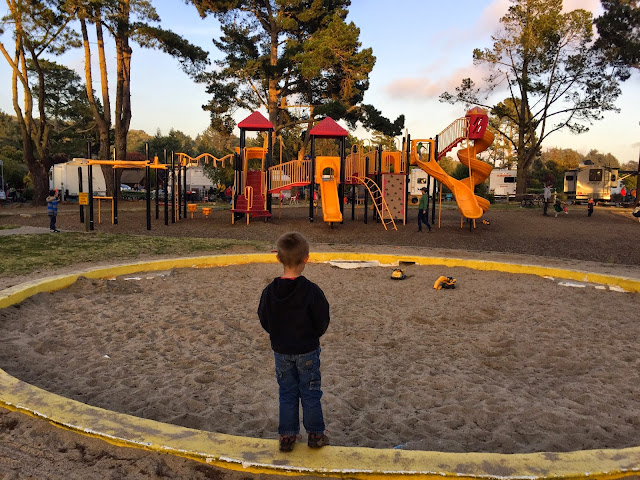 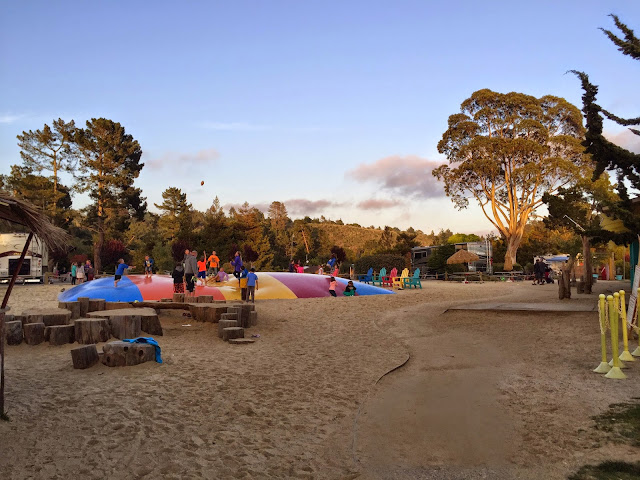 It seems many people take trips to visit a KOA and there are enough things to do to keep kids busy all weekend long. Once the sun went down though, we made a campfire, cooked dinner, and I introduced my family to the glory of s'mores. 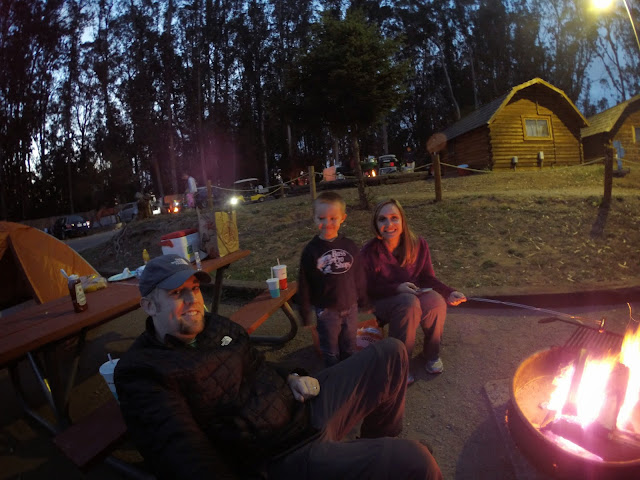 After, a surprisingly restful sleep in a campground with lots of other people close by, we packed up our gear, got some breakfast, played on the playground a little bit more and headed just down the road for a kayaking trip. Since this was Landon's first time in kayak we decided to make it a gentle ride, forgoing a trip in the San Francisco Bay or ocean for a family oriented guided tour in the Elkhorn Slough. There is so much to say about our little kayaking experience, that I will have to save it for another time. Overall, we all had a great time getting on the water and we couldn't have picked a better place for Landon's first trip. 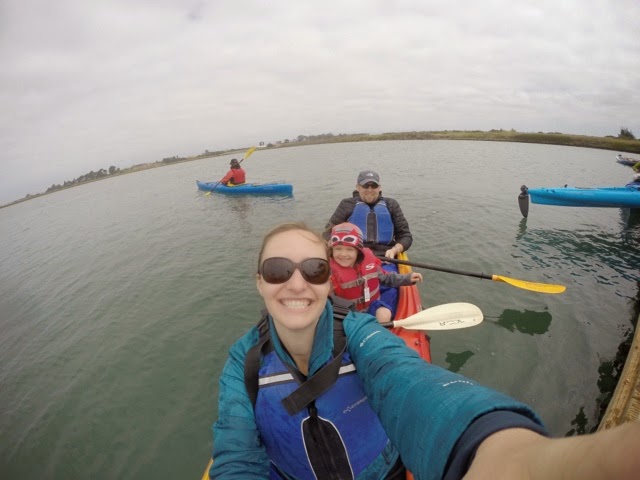 When our kayaking was over, we headed a few miles South to Pacific Grove. We had visited only a few weeks prior, hoping to catch the ice plants at full bloom, but could tell they still were not at peak yet so we headed back to them a little more vibrant. It did not disappoint. I could have sat on that bench all weekend enjoying the beauty there. 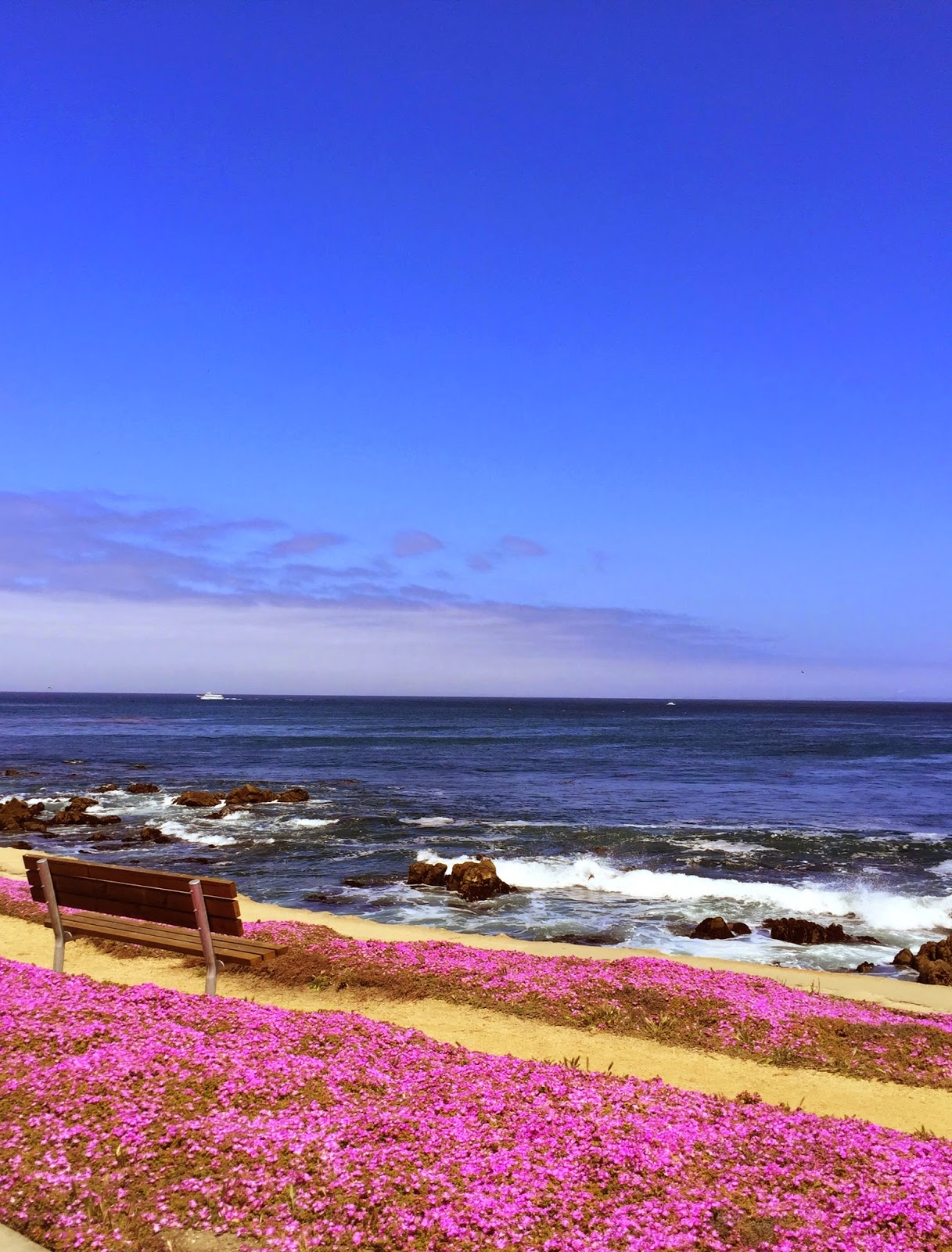 Pacific Grove practically ends at the start of 17 mile drive. Since we hadn't gone the drive before, we decided it was about time. We paid the $10 entrance at the gates, were handed a brochure, and began the slow drive along the coast made famous by the Pebble Beach Golf Course. Overall, we were not all that impressed with 17 mile drive. The drive was pretty but had nothing amazing or spectacular for the area. The most famous stop along the drive is the Lone Cypress, which is beautiful, but not quite the stand out we were thinking it might be. Of course, it is said to be the most photographed tree in the world so we of course obliged and snapped a few of our own. 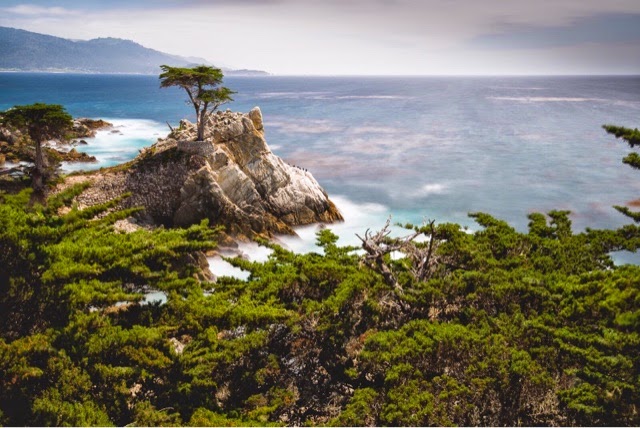 Hands down, the most spectacular thing along the drive were the homes. With our favorite in-car app (Zillow) pulled up we found homes as much as 37.5 million. It was incredible! Especially considering most were only 6,000 to 8,000 square feet. 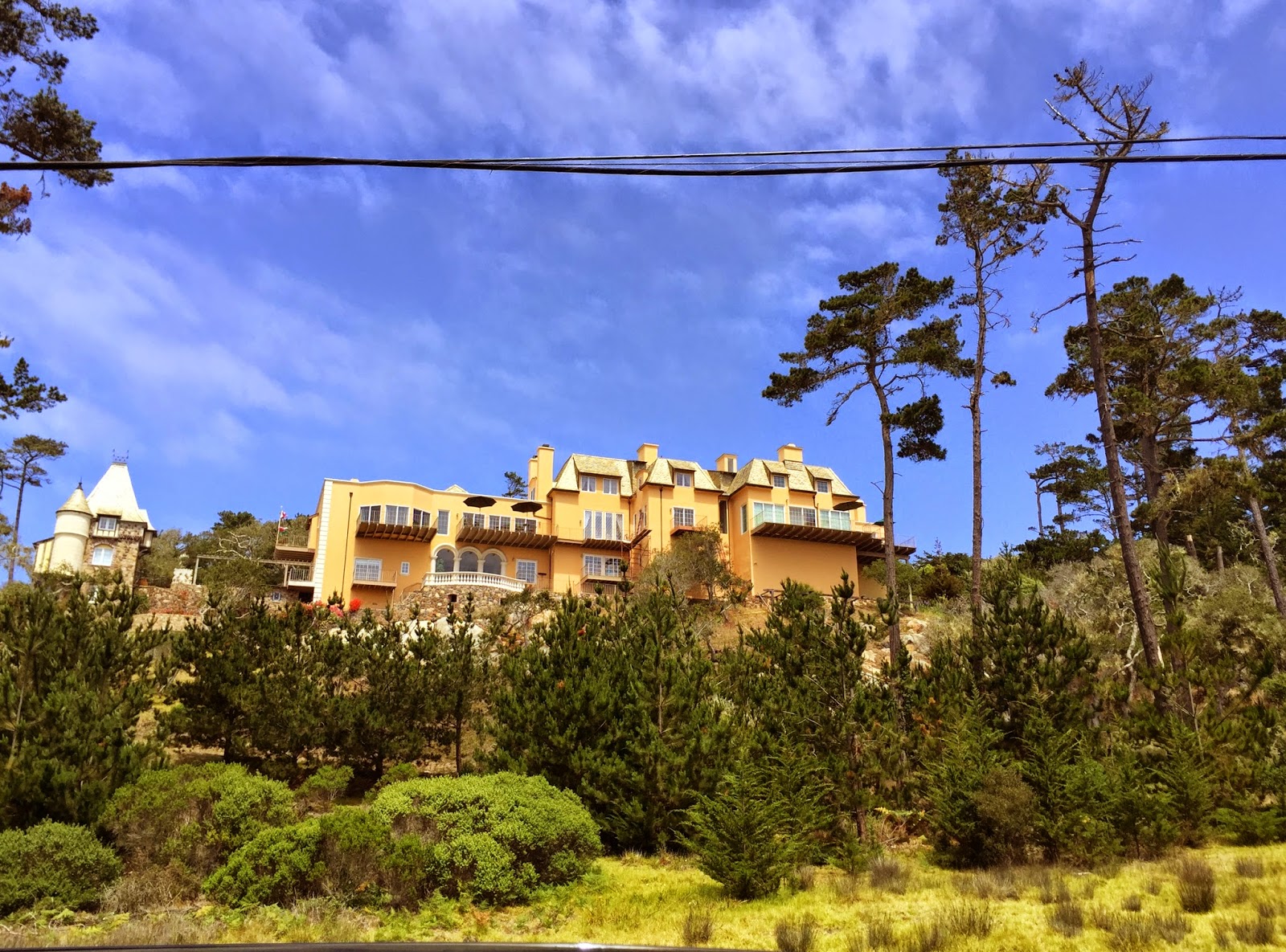 After being a little underwhelmed, we decided it was time to get out of the car and let Landon have some fun. There is nothing he loves more than playing on the beach so Adam pulled up a map to try and find a nice beach nearby we hadn't been to before. He picked a good one too, Fort Ord Dunes State Park. A new state park, this old military area was deserted by the military in 1994 and turned over to the state. The Dunes were once used as artillery ranges. Just a short hike from the parking lot down the beach, I was surprised, just how beautiful these dunes were. Covered in ice plants and rising higher than I had realized when seeing them from the road before. 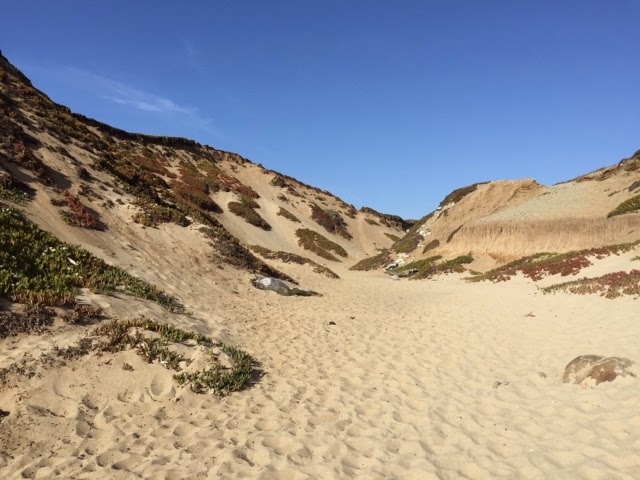 Of course, these high peaks only meant one thing for Landon, a place to climb! Once we put our beach toys down, he immediately set off to conquer them. I decided to try myself and it proved to be quite the work out.Adam took this picture of us working our way to the top. 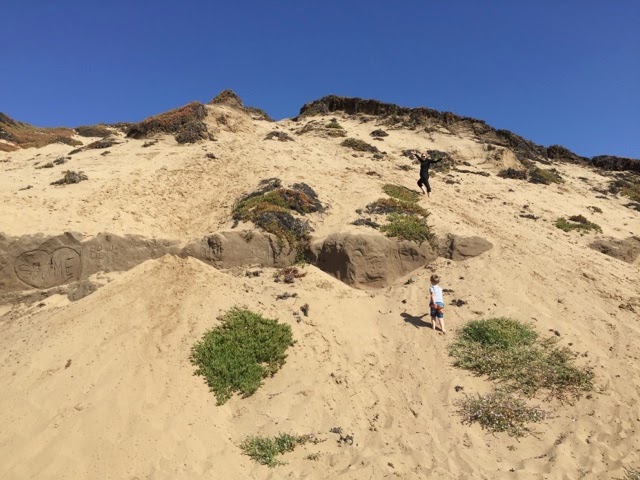 This one is from the top looking down, it was actually a little scary to see how high we were. 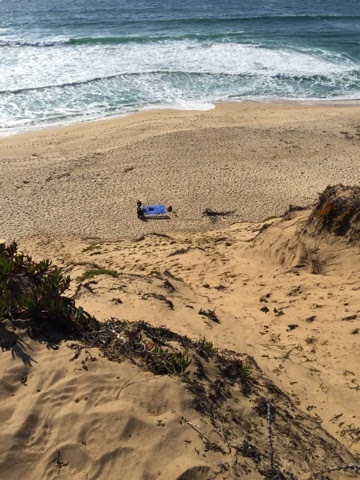 But, it was sooooo worth the climb. The views were spectacular! 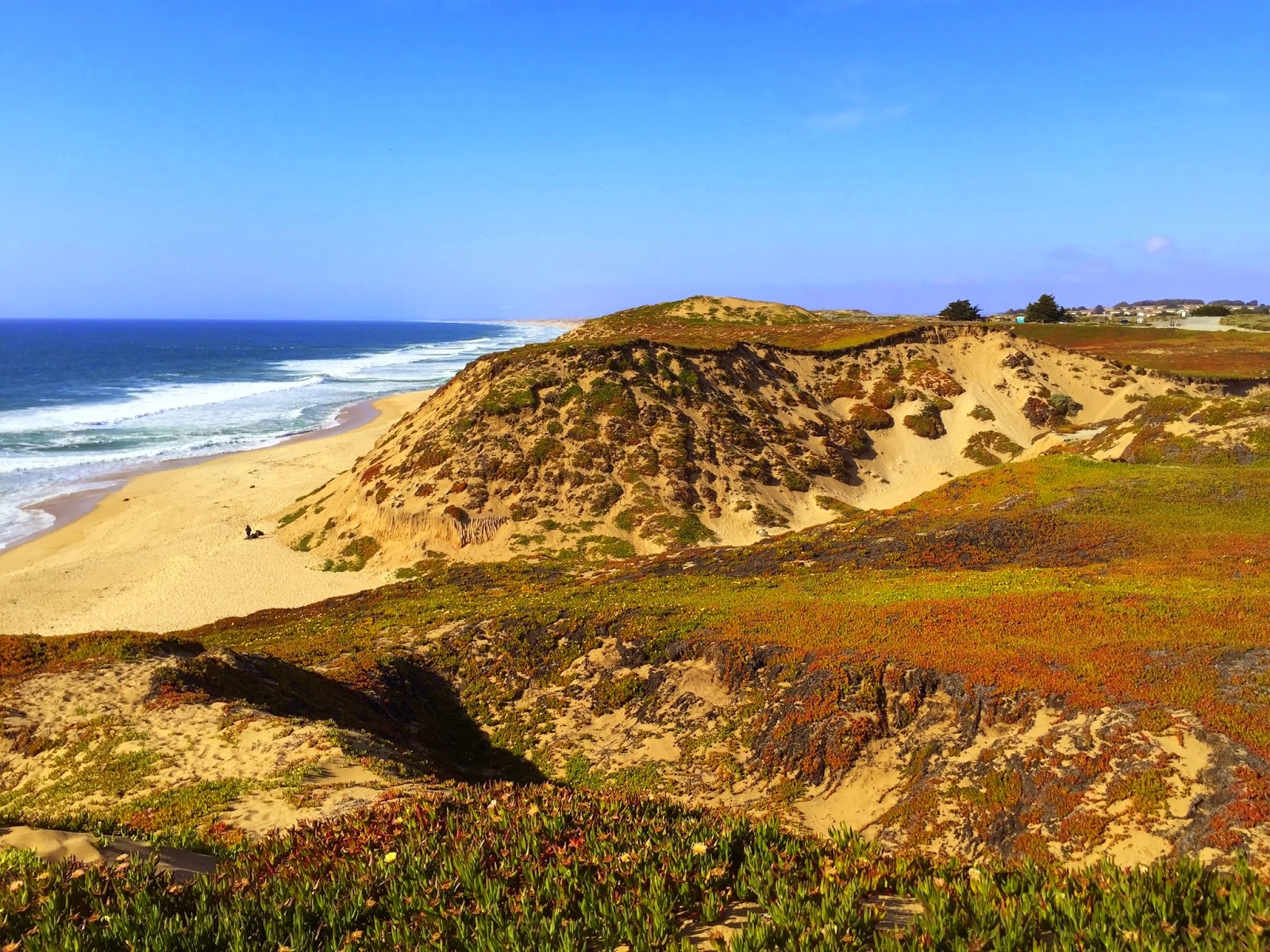 Of course, the most fun was had by running/sliding down. It was more of a controlled fall and didn't seem as scary since it was plush sand at your feet. Landon must have climbed up about ten times. He couldn't get enough and if it hadn't been so much work to get up, I might have had a few more goes of it.

As much fun as it was, the weekend couldn't last forever, so after a few hours of fun and sun on the beach, we headed back in the car to make the two hour drive home. As we arrived back in the Bay Area just about sunset, we were greeted by Karl (the name of the famous fog) who welcomed us with open arms back home. A fitting end to a wonderful weekend! 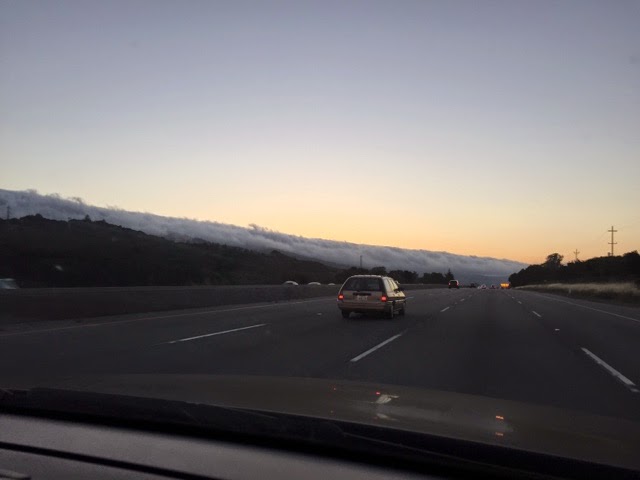