Kayaking in the Elkhorn Slough


Following up on my last post, I wanted to share all about our kayaking adventure last weekend. I love kayaking and was so close to purchasing one before we left Tennessee. So since we moved here, I've been dying to get out on one.  We knew this would be a family event, and although Landon has been on a boat before (most recently on a catamaran), I knew he wouldn't be scared of the water but I wasn't sure how he would feel on a small kayak so close to water. I also wasn't sure how well he would participate in the activity and sit still.

At first, I thought we would try out  an outfitter in the bay but quickly decided it would be too much traffic. While playing on the beach at Pacific Grove a few weeks ago, I came across a kayaking outfitter and stopped to talk to them about taking kids out. They said the currents, at times, can be a little too strong for small children so their minimum age is usually 5 years old. I always try and work around Landon's age and size instead of letting it stop us, so I  was delighted when I came across Kayak Connections who gives a Family Adventure Tour in the Elkhorn Slough aimed specifically at young kids as young as three.

The Elkhorn Slough is a 7 mile waterway that is fed by the Pacific Ocean. Since it is made of salt water and open from the ocean, many ocean dwelling animals prefer the shallow waters of the slough.  With little threat from larger predictors, its a perfect place to rest, sun, and even play. Here, you can get up close and personal with sea otters, sea lions, and harbor seals. Their cool,calm demeanor in these safe waters makes for an incredible encounter. 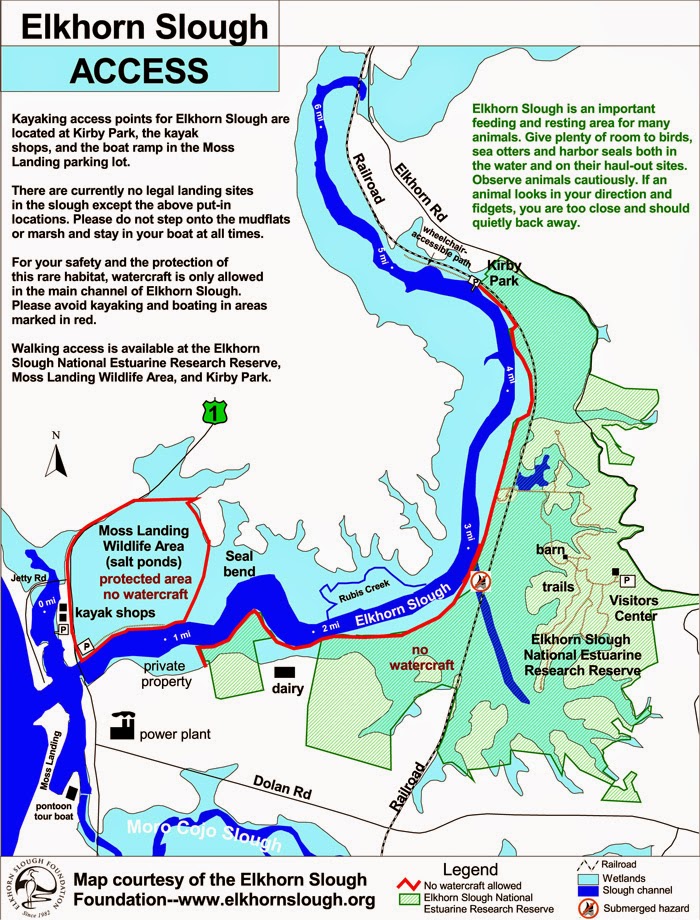 So Sunday morning, after a night of nearby camping, we headed to Moss Landing for our 10 am tour.
When we got there, we found out that despite the large groups, we were the only ones on the family tour. Which meant we had a private guide showing us all along and letting us determine the speed and focus. Although it wasn't planned, it made it that much more enjoyable for all of us, especially Landon. After getting on our Hammer waterproof pants, we had a little lesson on paddling, put on our life vest and headed for the dock. Landon didn't like his pants at first and insisted on pulling them up like shorts. They also gave him a half paddle so he could participate or at least try. 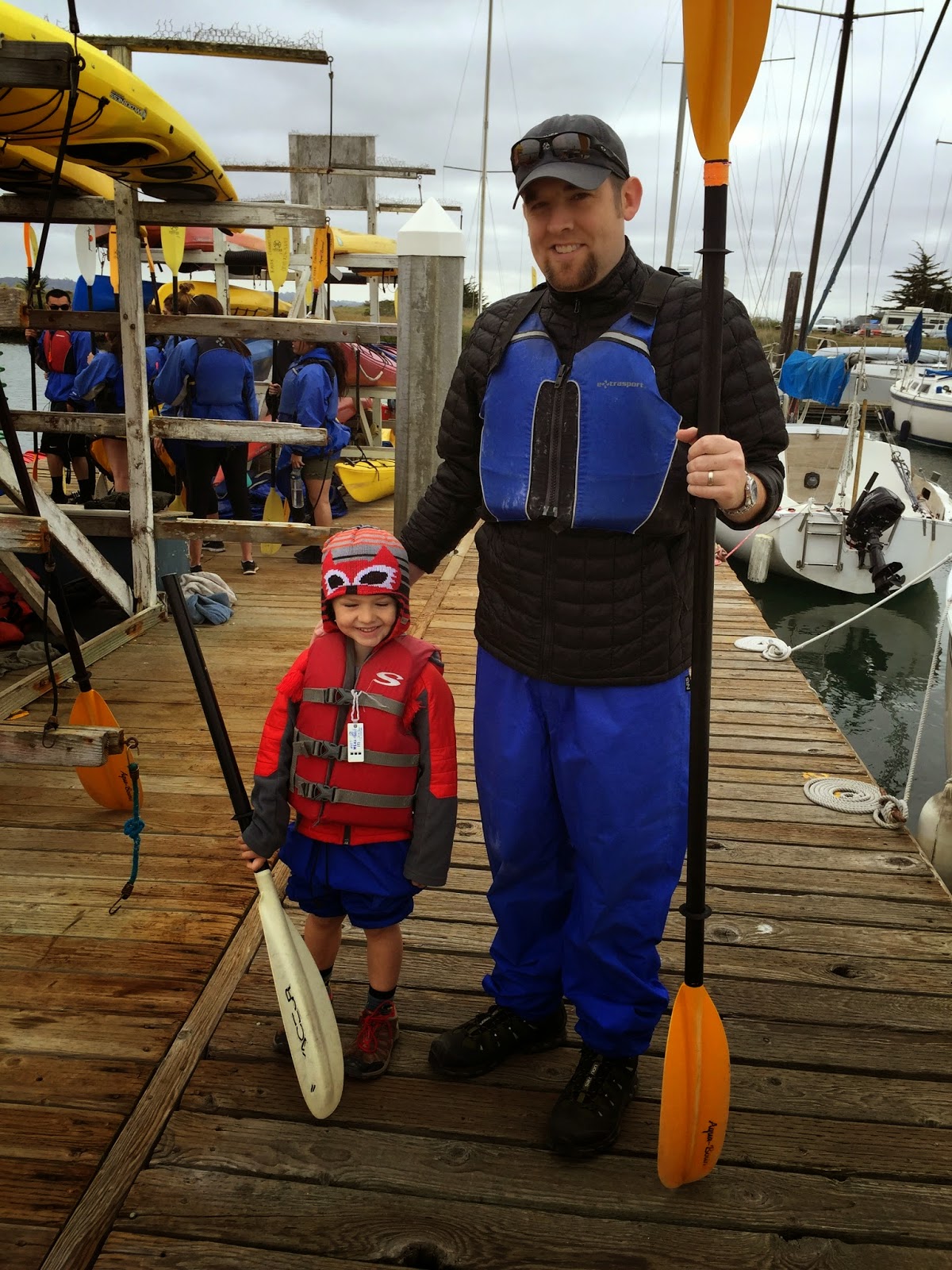 Landon was a little unsure of the stability at first. He willingly got in the kayak, right in front of his Daddy! But, as you can tell from the picture, he didn't feel stable at all. Luckily, they had us in a two person kayak with a middle seat of sorts, which works perfectly for a small child. Being so large, it is a little harder to stear and slower than a single kayak, but I think having both us in their with him made him feel much more secure. 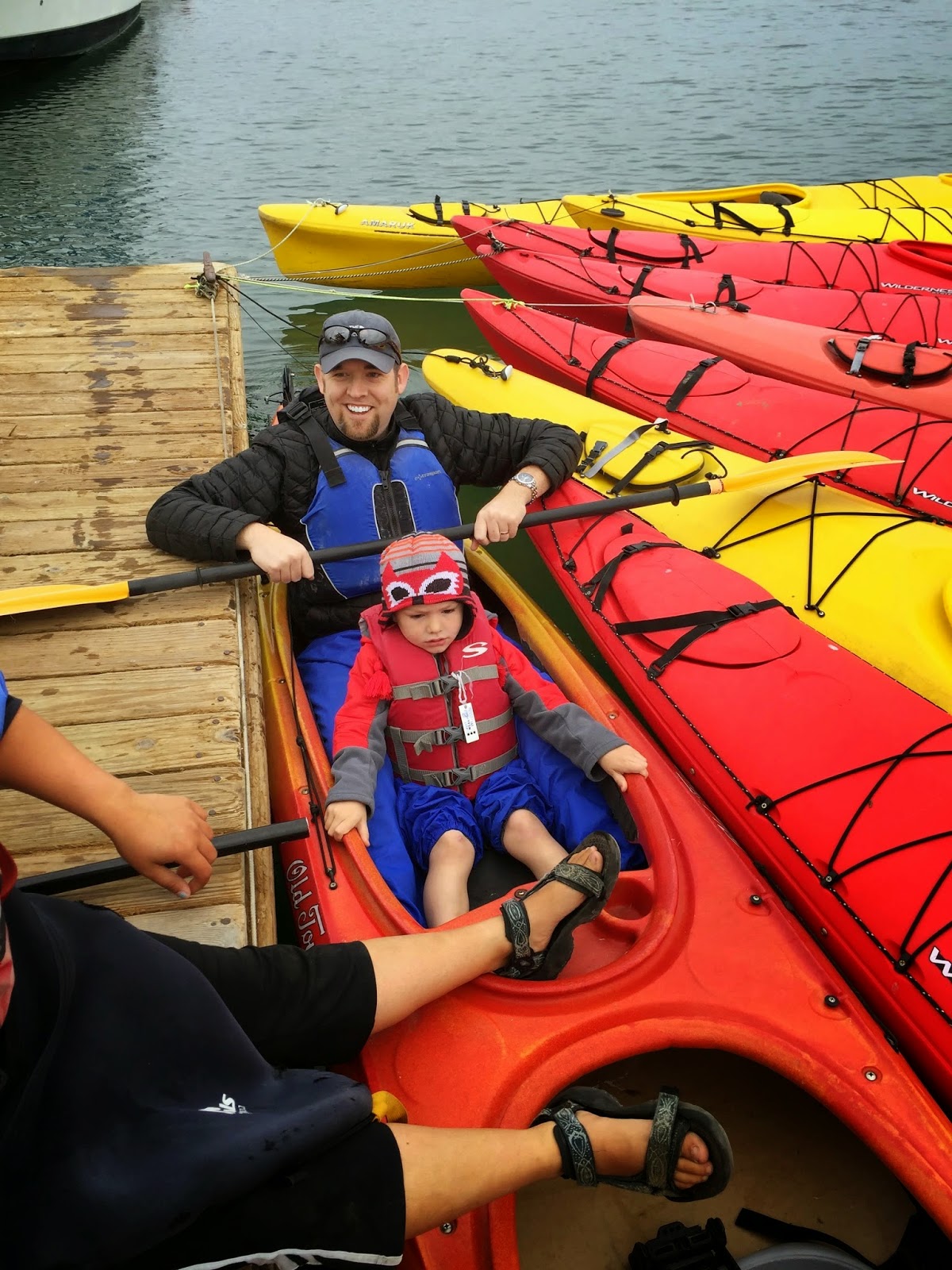 It wasn't long before he was trying to paddle himself and asking all kinds of questions. Of course, most of his questions were about the buoy's placed all throughout, but he was enjoying it and participating which was more than I hoped for. 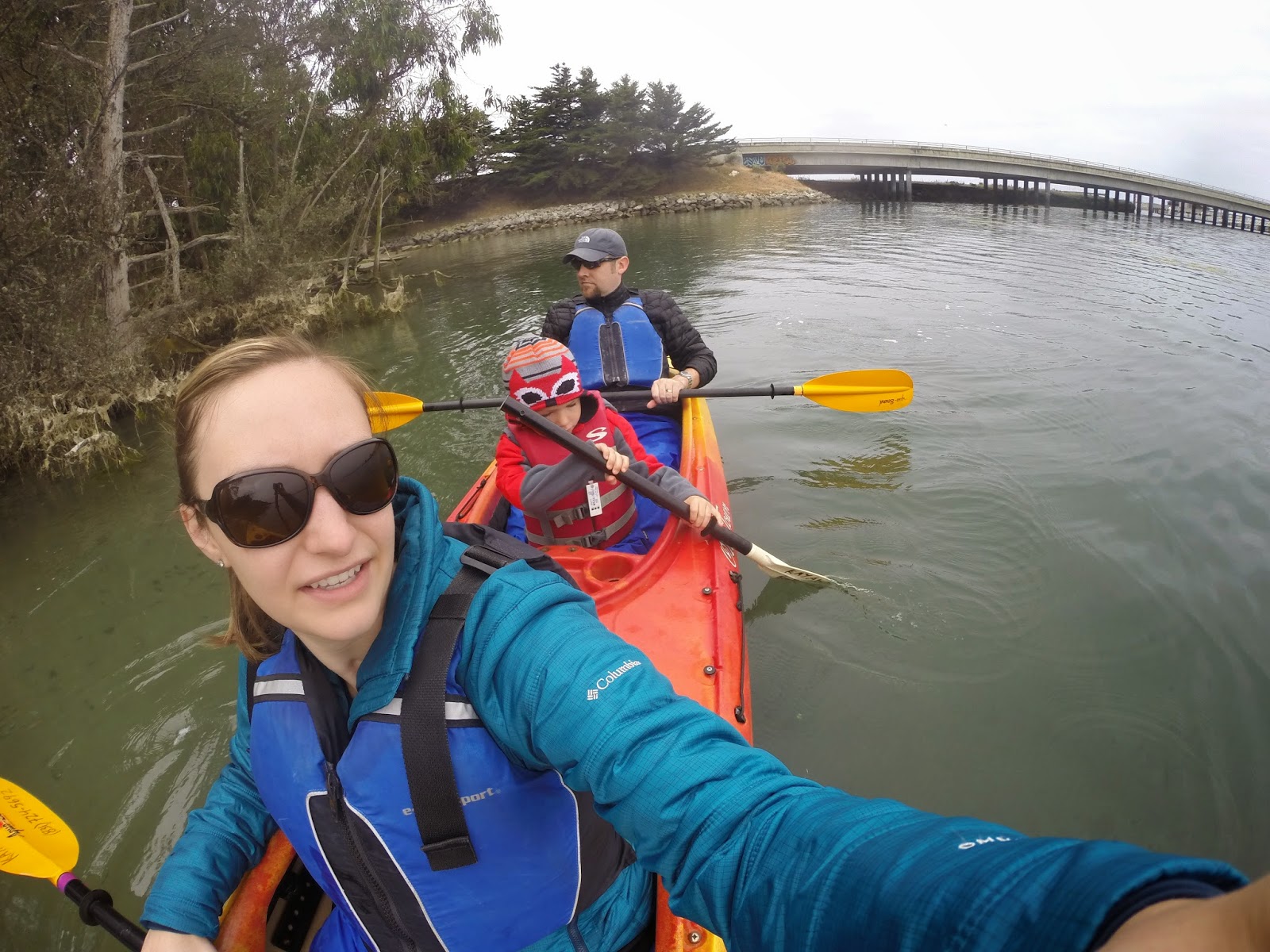 Although the Slough is 7 miles long, we stayed mainly in the mouth getting up close and personal with sea otters, sea lions, harbor seals, cormorants, and even sand dollars.Almost brought to extinction as well, the Elkhorn Slough now has the largest population of sea otters in the wild. We watched them closely as we paddled within 5 feet of otters who were lounging on their backs, cleaning themselves, and eating their favorite dish of clams. Not sure how wet we'd be getting, I clumsily snapped a few pictures trying to show some of the animals.

This was one of the first otters we passed. It's hard to tell from the picture, but they are much bigger in the wild than the ones at the zoo. They keep their nose, hands and feet out of the water as much as possible to keep them warm. Their bodies are covered in millions of hairs, but their hands and feet are not. They really are cute little critters and, as it turns out, pretty smart too. They love clams, but since they are hard to open, they carry around a little rock that help does the job. Since they eat over 25% of their body weight (which is about 70 pounds) per day in food, they spend a lot of time opening clams and would waste a lot of time looking for their tools. To help speed up the process, they keep a favorite rock tucked away in a pocket of skin around their armpit. That way, when get the clam, they can just pull out their rock and feast! 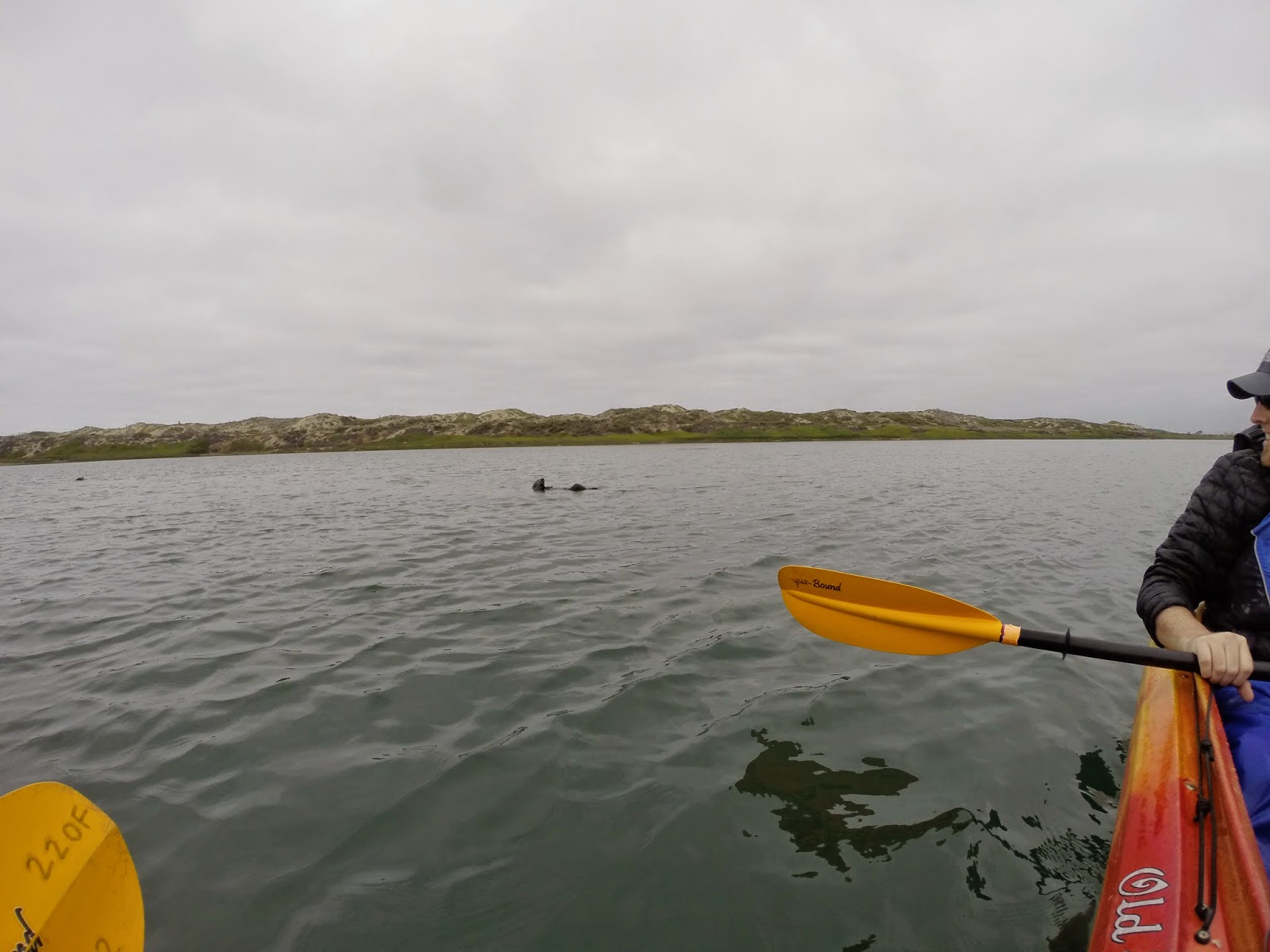 Otters were not the only animals we got up close and personal with. As soon we entered the water, we made our way towards the mouth of the slough and passed a sand bank. Sunning on the bank was a large group of harbor seals with not a care in the world. As we passed just a few feet from them, they looked up or opened their eyes, but it probably would have taken quite an effort to disturb them. On top of being cute as can be, it is pupping season so many had their babies along the shore with them. 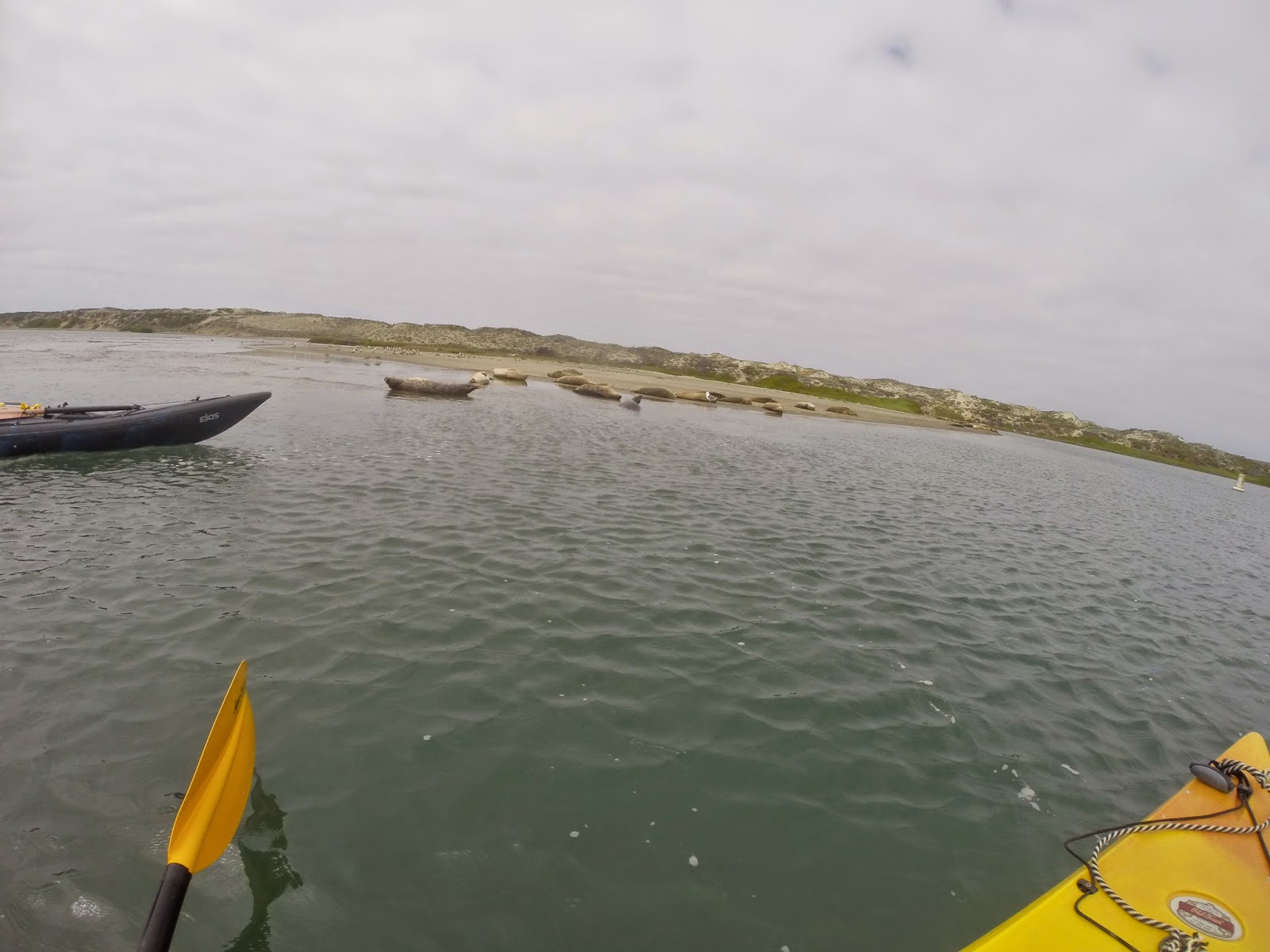 Along the way, our amazing guide (Lauren, if you ever have a chance to go), took us to a cove, put her hand down in the water, and scooped up some sand dollars for us to see and touch for ourselves. Little did we know, sand dollars are actually dark in color. Only once they die do they get the white or bleached color most people are use to seeing. They also have thousands of spines on their underside which you can actually feel tickle your hand as the sand dollar tries to move. Landon preferred petting the sand dollar to holding it. 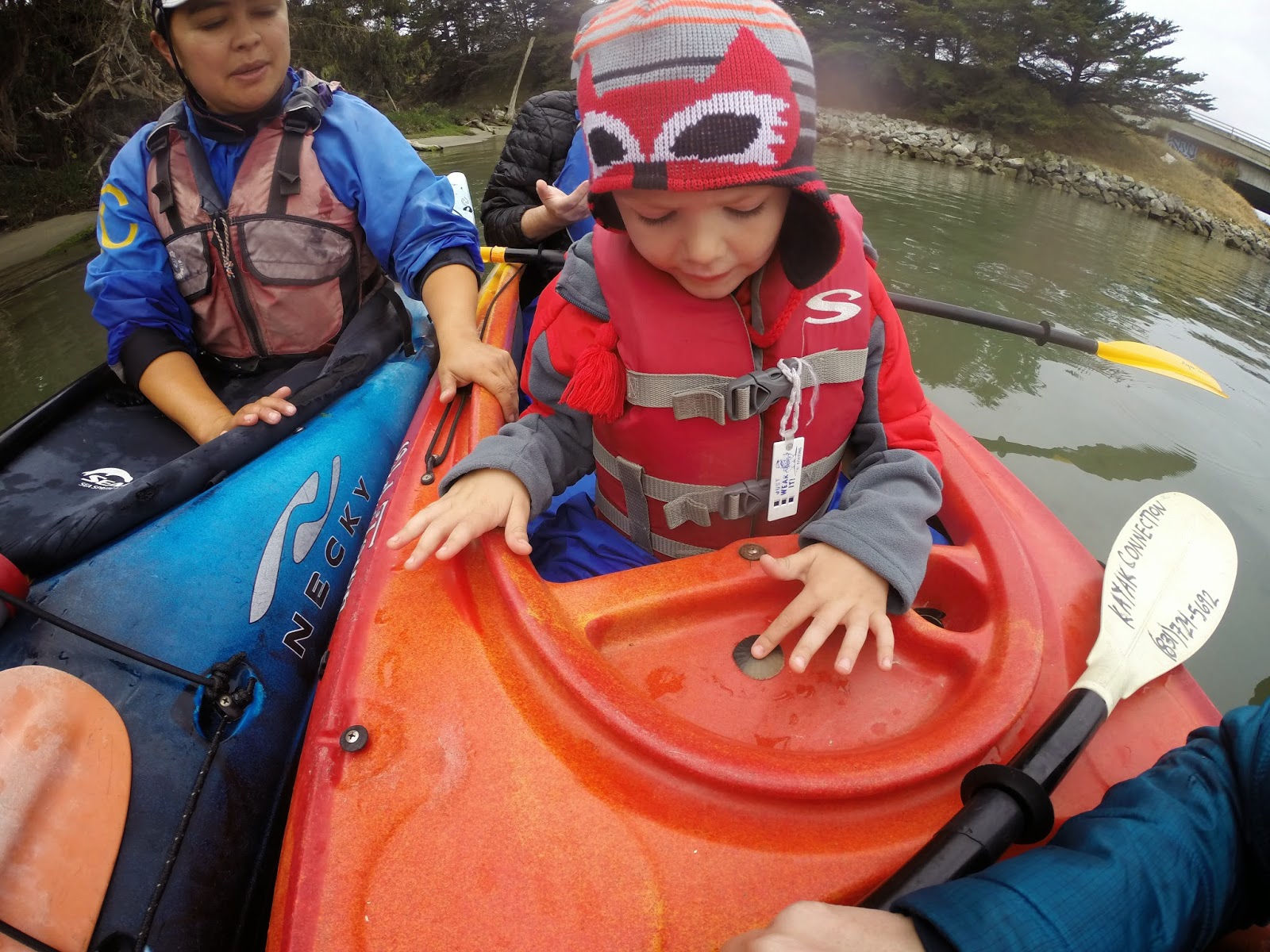 And it is too bad sea otters don't get sand dollars because as Lauren pointed out, the bottom of the slough was covered in them. They actually stand on their side, using the current to filter food to them. All those dark spots in the water, are actually tons and tons of sand dollars just hanging out waiting for some food of their own. 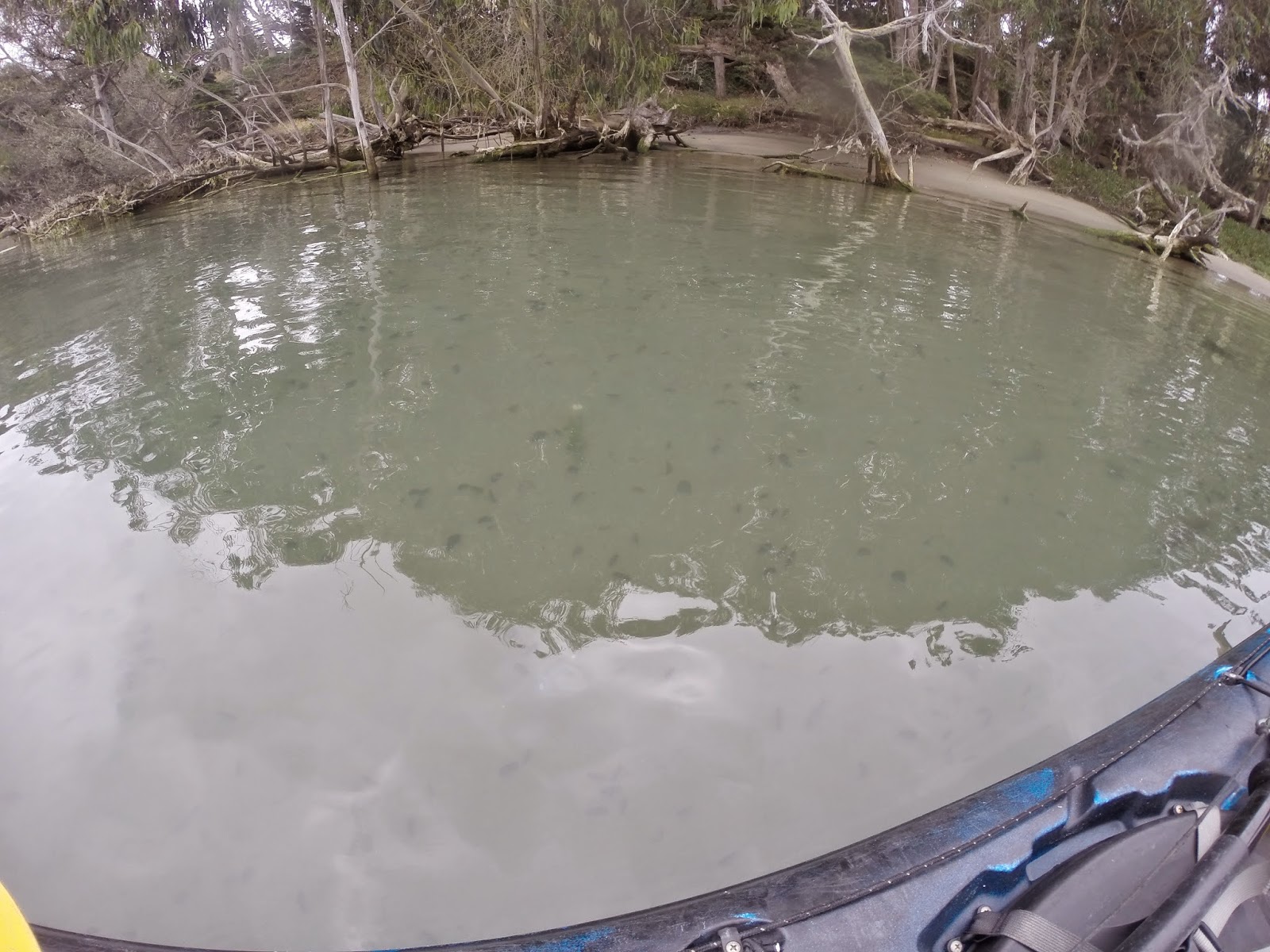 This kayaking trip solidified two things for me. My love and desire to own a kayak and our need to help Landon experience all of kinds of new things. For two hours, Landon sat still, engaged in questions about his surroundings, got up close to many different animals, and tried a new activity. And as neat as kayaking the slough was, the slough itself is worth a visit. With lookout points and walking trails, I know we will visiting again and bringing visitors. I'm not sure of the next time we will be getting out on kayaks, but it will happen. Maybe even when we get one of our own. 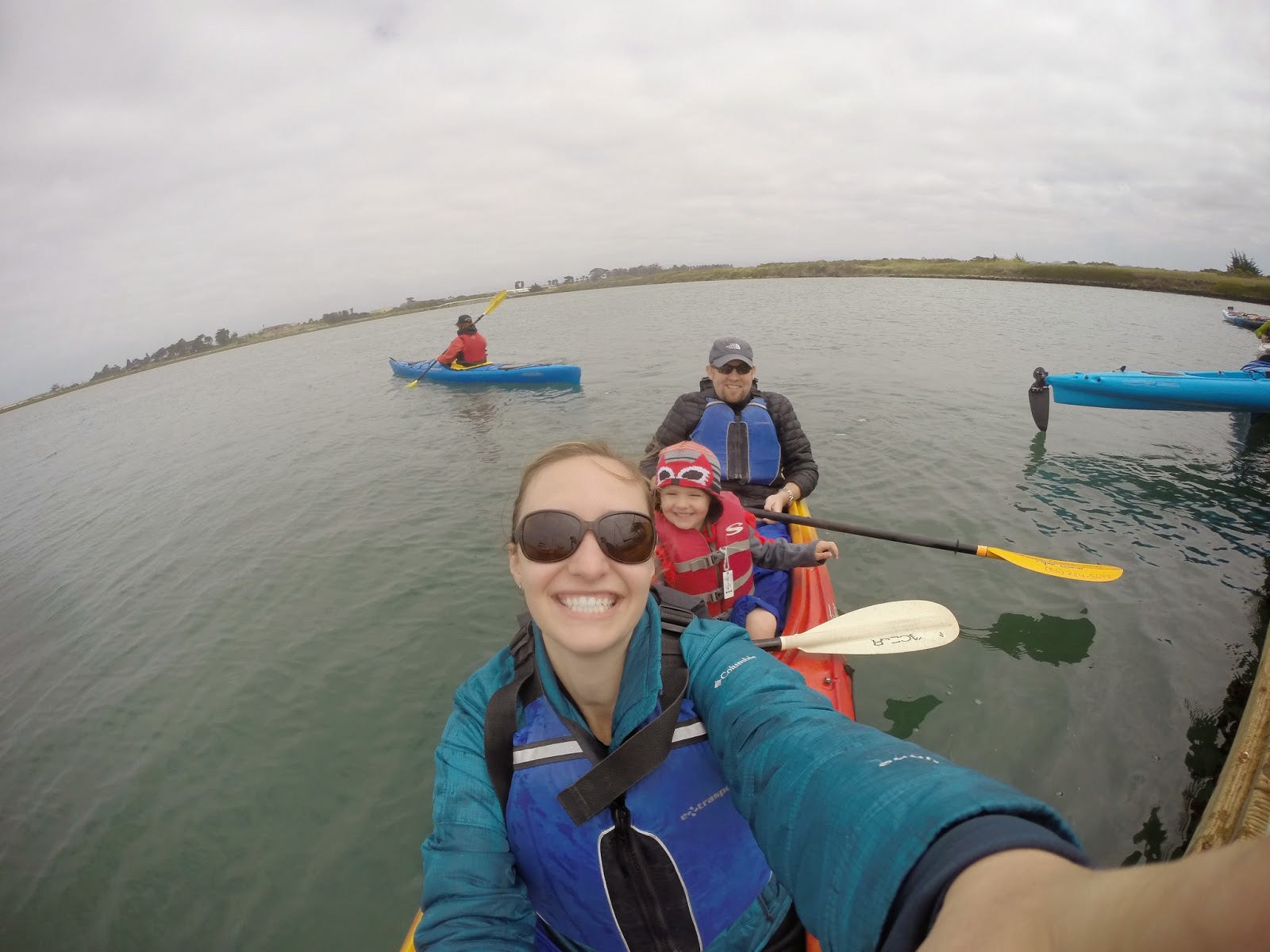