It's been on our radar since the beginning, but for some reason we've never made the trip to Fort Funston until Sunday. I first heard about it on Pinterest and told Adam we would have to take Kaiser there as soon as we got him out to San Francisco. Despite being only 10 minutes from our house and taking Kaiser to numerous beaches in the last 10 months, we never made our way over to what we planned to be Kaiser's first beach. Well, Sunday all that changed. We loaded up the family and decided to hit the popular doggie beach once and for all. 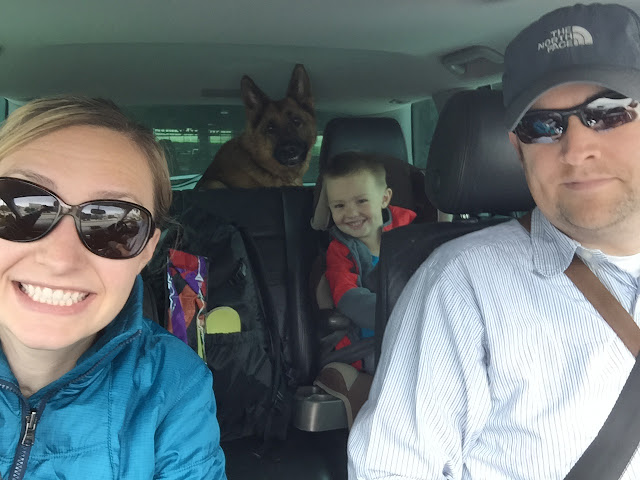 Landon was sick the last few days so we told him this was strictly a day for Kaiser to play. We left all the sand toys at home including the swim shorts and wetsuit while grabbing only the chuck-it for Kaiser we headed to the beach. 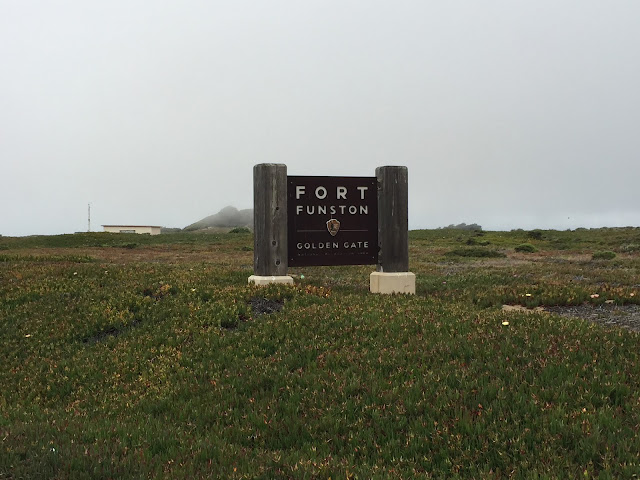 Part of the Golden Gate recreational area, and like many other parts of San Francisco, Fort Funston has a military history, which aptly explains the name. We were thrilled just to be able to find a parking spot and see that the heavy fog was dissipating somewhat over the area just as we arrived. Fog or no fog, Kaiser was just excited to get out and see where we were. 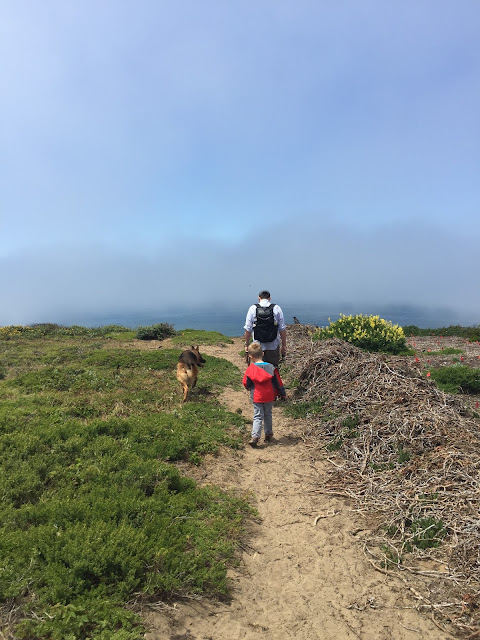 A number of sand trails with ice plants on either side led us from the parking lot towards the ocean. Not having any idea what to expect, we were a little surprised when we came to the edge to learn that we were on top of a massive sand dune and the beach was quite a ways below. 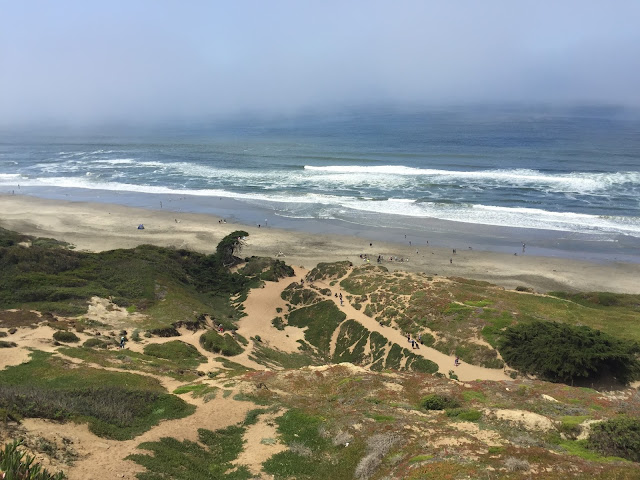 Not only was it unexpected, but it was also much prettier than any other area beach. We could see all the people below playing on the waters edge with their dogs and excitedly hurried to join in. Landon, Adam, and I had a blast running down the sand dune toward the water. It's almost like you have a little less gravity as you can sort of make gigantic leaps without a hard landing. The only member of our family who wasn't so sure was Kaiser, who kept stopping, sitting down and checking on where everyone was and if they were ok before proceeding slightly hesitantly. 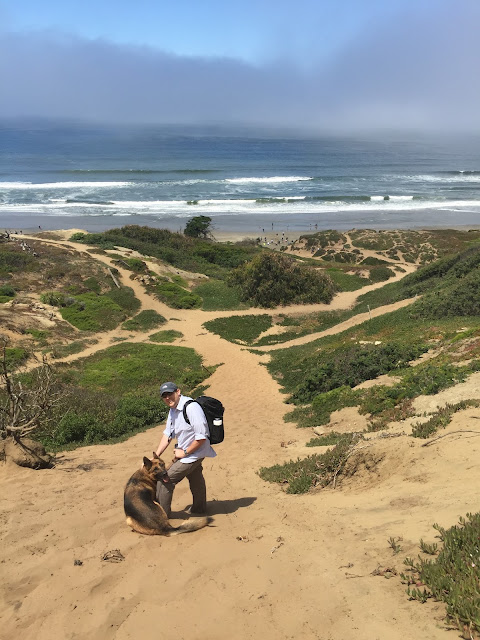 Of course, once he got down the beach it was a different story, he was in doggie heaven. 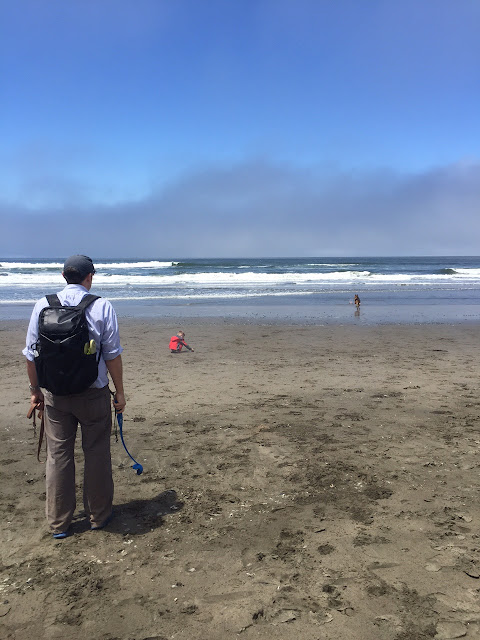 If you have a dog that likes chasing a ball and you don't have a chuck-it, then you need to get one! There is no toy Kaiser has ever enjoyed as much and the beach is the perfect place to throw the ball for our water loving dog. Even Landon loves to throw the chuck-it for Kaiser and does a pretty decent job. 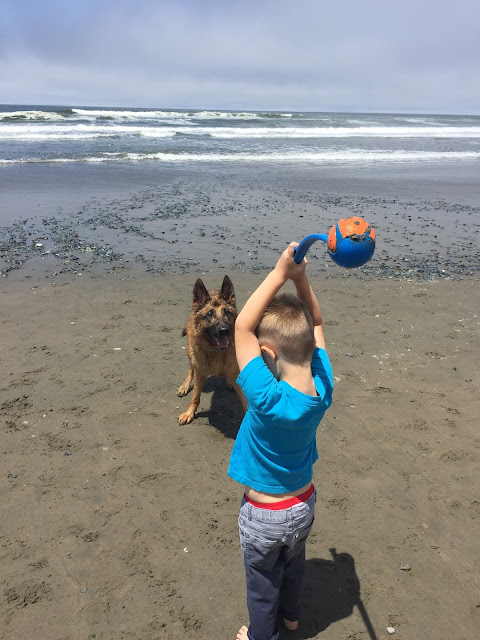 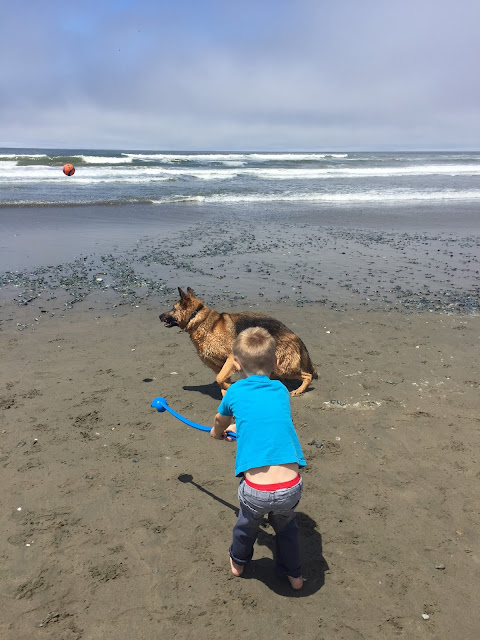 And, speaking of Landon, despite telling him to stay our of the water, we should have known better. The boy just cannot help himself and ended up having to ride home without pants on. It's not the first time and you think we would have learned by now. Some things just never change. 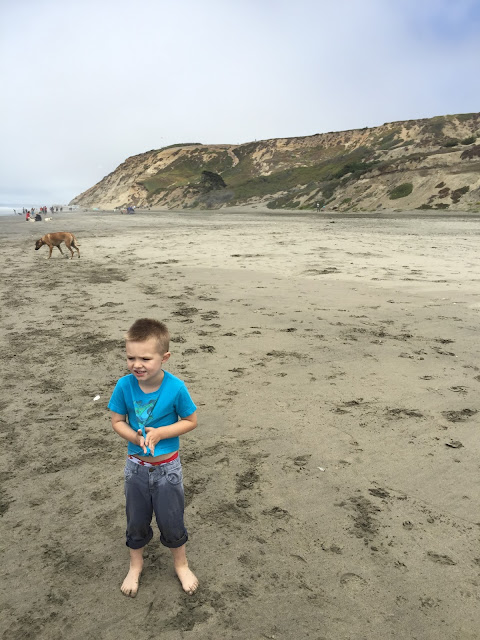 He was little annoyed that he was soaked, I honestly couldn't blame him. The dogs were running all about having a great time and he just wanted to join in. Kaiser even made some new friends. When we first arrived, a meetup group of French Bulldogs were all together and it took everything I had not to steal one. If I was going to get any breed other than a German Shepherd, it would be a French Bulldog. Kaiser played with one for a few minutes and then moved on to a few dogs more his size including a number of German Shepherds and an adorable Great Dane puppy. 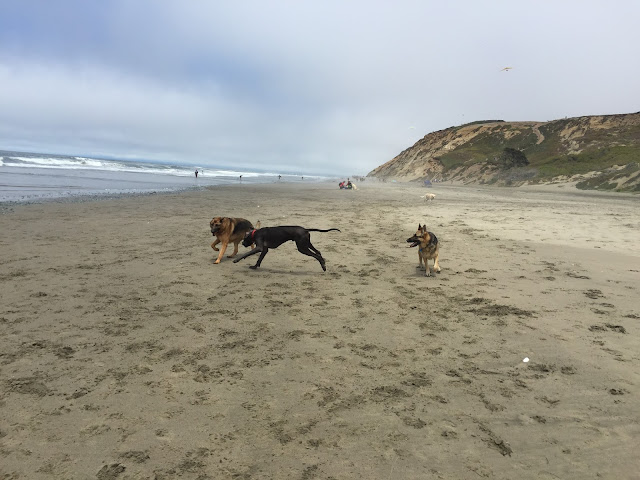 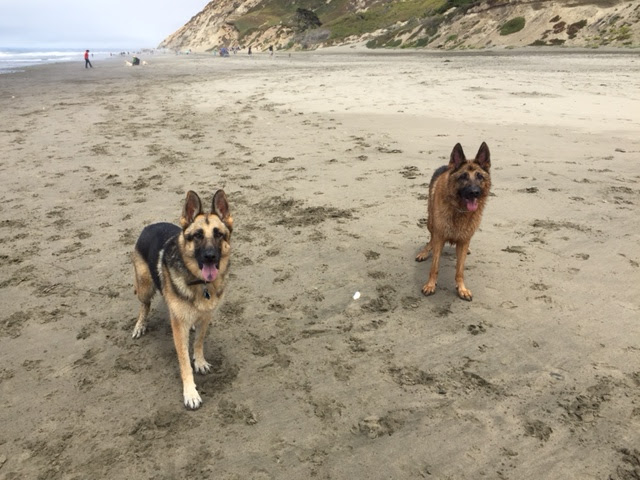 Of course we were at the beach for our furry son, but Fort Funston is also the most well known hang gliding spot in San Francisco. 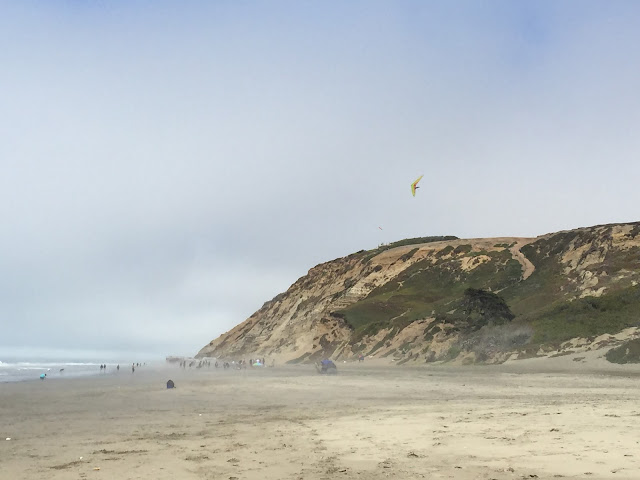 Not only is the terrain much better for hang gliding than anywhere else in the area, but the air currents allow for them to almost suspend themselves in one spot for an endless amount of time. It was fun watching them glide and, no surprise to us, Landon voiced his desire to try it himself. Maybe in a few years...

Down on the beach, there was a lot of new things as well. I'm not sure if it is jellyfish season or something about this spot causes a lot to wash up on shore, but there were thousands of them washed up on the beach. 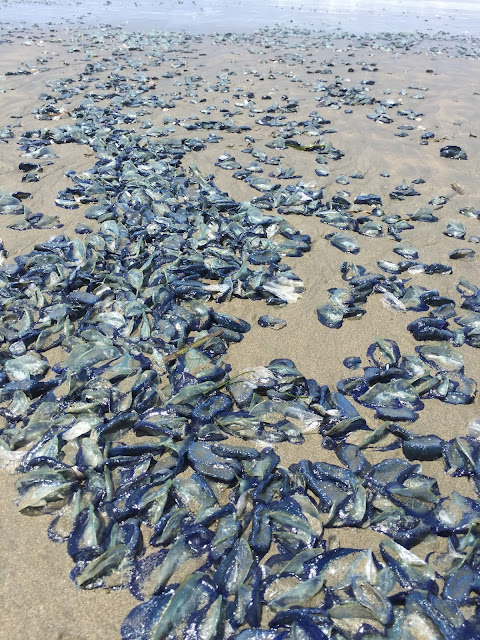 Having been stung by a jellyfish before, I made sure they were not a threat to any of us, including in the water, before I felt comfortable with my family and so many jellyfish being so close. I picked a few up and noticed their tentacles were gone. After a while, we didn't even notice them. Walking over them, they kind of felt like thin, slippery plastic bottles. 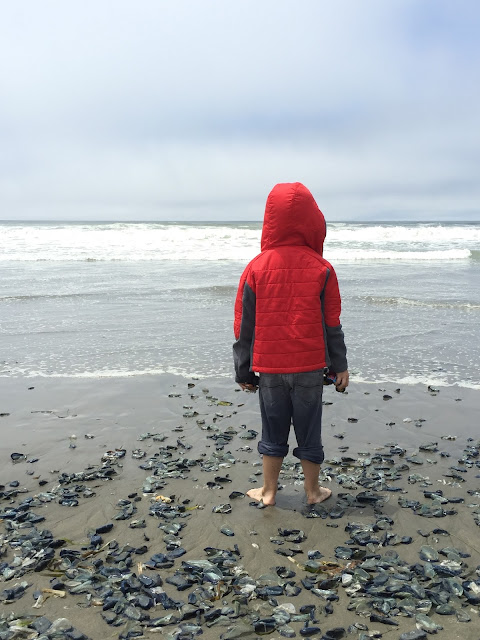 We also managed to find a number of crab shells. Which explained what a few of the fisherman on the beach were looking for. 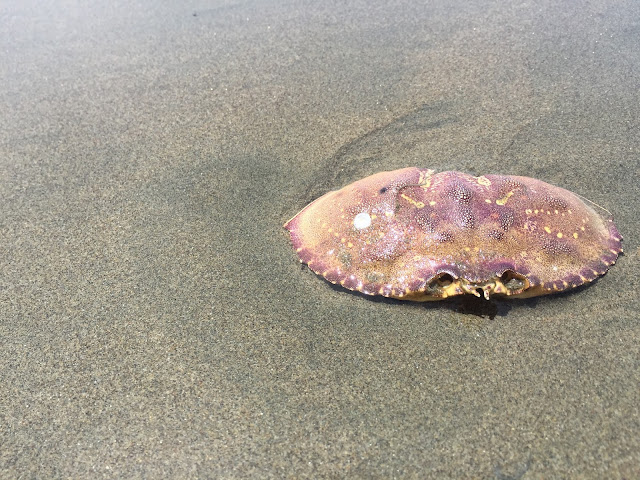 We explored the beach, watched the hang gliders, and most importantly, let Kaiser play until his little doggie heart was content. 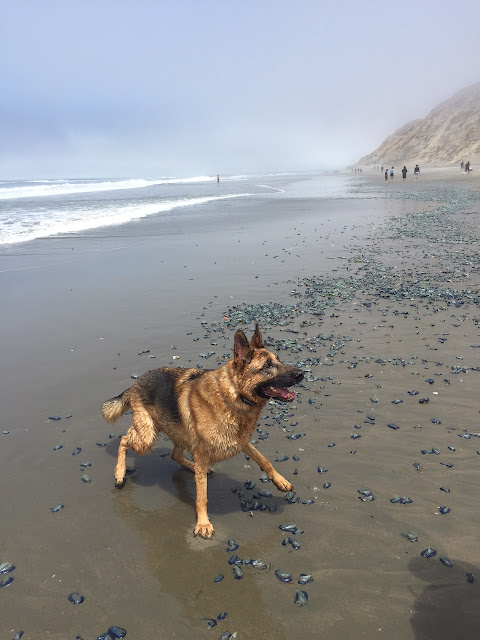 Well that isn't entirely true...eventually we made him take a break, drink some water and rest. Of course, he kept an eye on his chuck-it just in case we decided to throw it at any second. 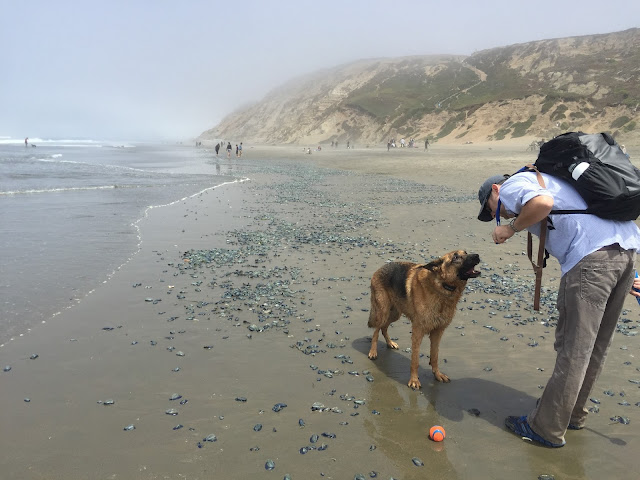 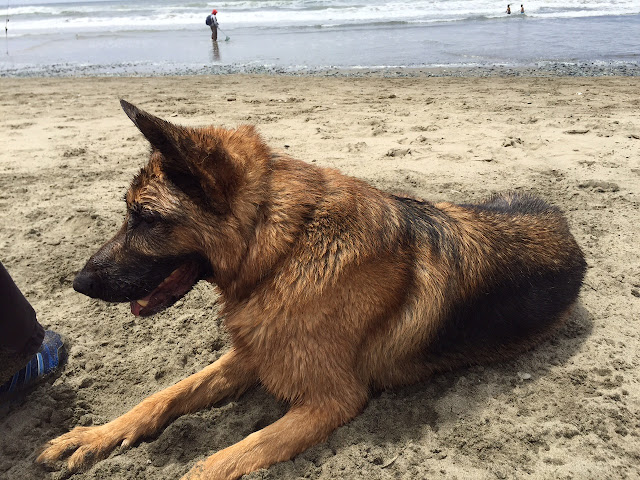 Since the dog is a complete machine and would have played all day, we eventually decided he had a enough and called it a day, but not before taking a picture of the two kids in the namesake fort. 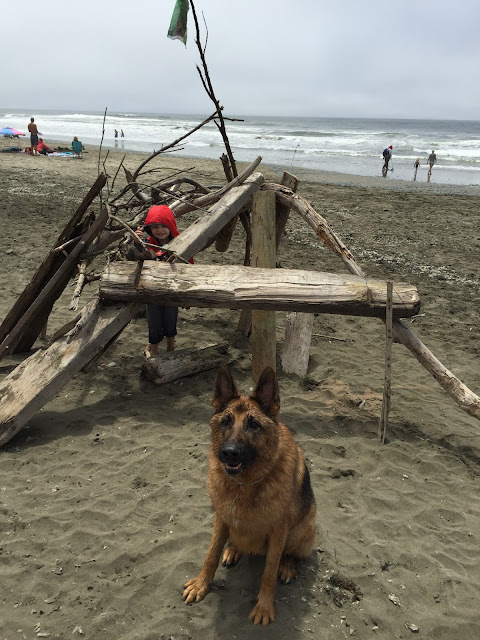 We all came home dirty and wet, but not regretting it a bit. Landon was immediately put into the bathtub which looked like this once he was done. 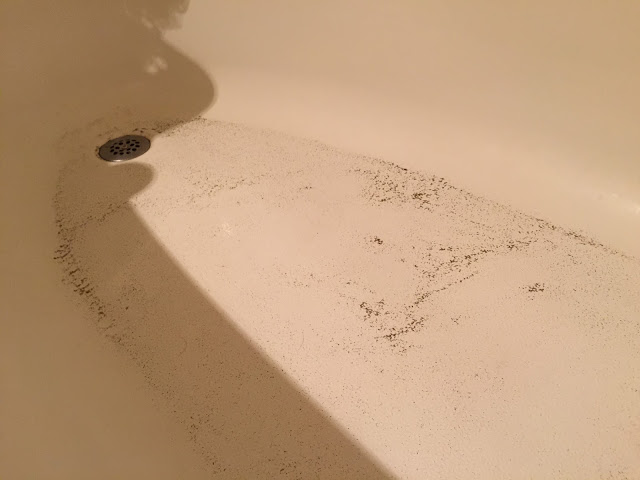 Beach life problems I suppose. Kaiser spent a few hours on his cot in the kitchen drying off, but stayed in the horizontal position for the remainder of the day. I think it is safe to say, Fort Funston was a hit! We will back, in a few weeks once he's had time to recover. 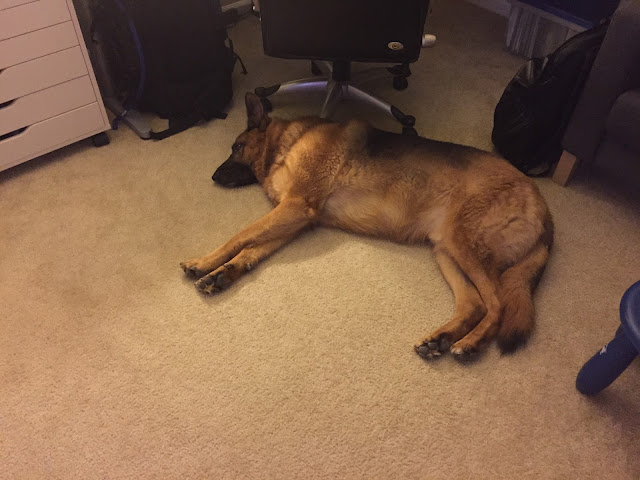