Ever since our visit to Switzerland in 2012, I've been dreaming of the blue/green Alpine lakes and having the chance to visit them again one day. This last weekend, while we didn't make a trip across the Atlantic, we did make our first trip to the next best thing; Lake Tahoe. 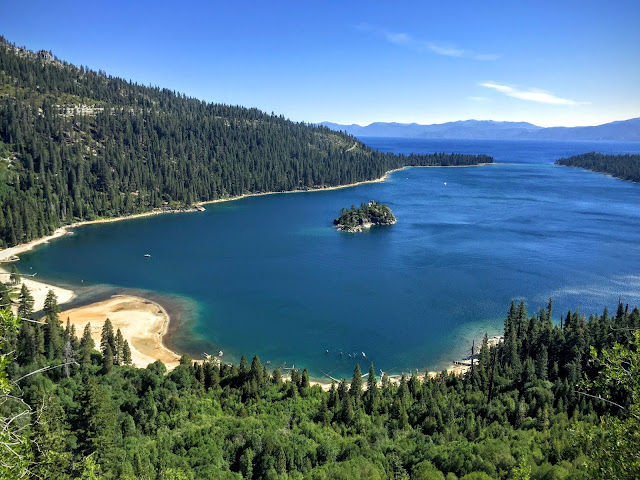 For whatever reason, I wasn't too excited to go to Lake Tahoe when we first moved here. I had heard there were lots of casinos and figured it would be a sell-out type of place around a big lake but, after hearing more and more about it and doing a little research on my own, I quickly learned the error of my thinking and started planning a short trip over our 6th anniversary weekend. My birthday was just a week earlier and Adam surprised me with the best birthday gift ever; A kayak which couldn't have come at a better time. Having wanted a kayak for awhile now, and coming within inches of buying one last year, we were super excited to take it to Tahoe and try it out. Can you tell? 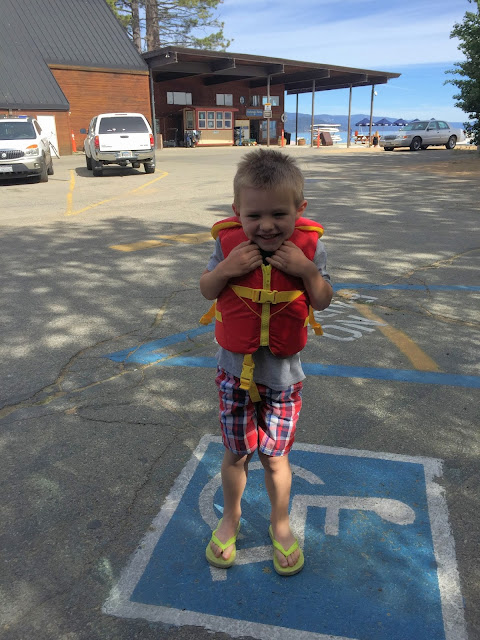 Getting ready to head out. 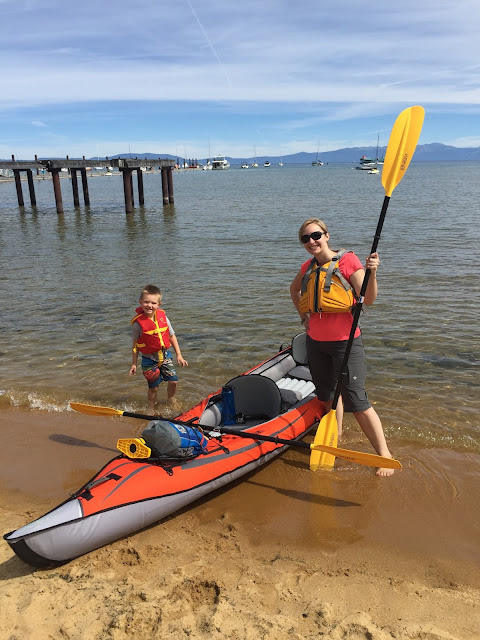 Family shot on the water. 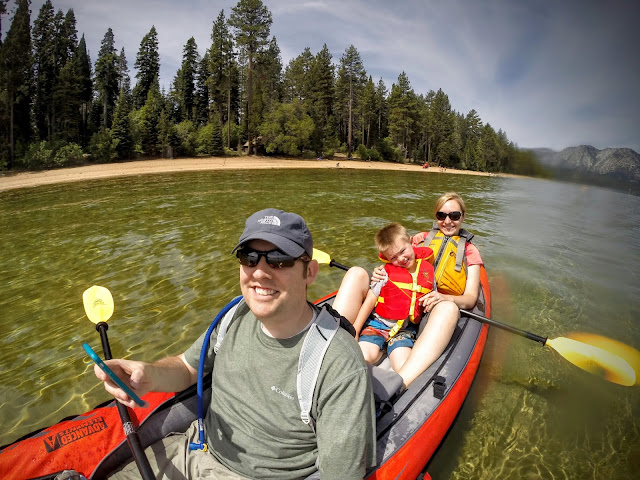 It turns out, we don't really like this kayak and will probably be returning it for an upgrade, but we still had a great time out on the water. How could we not with a setting like this? 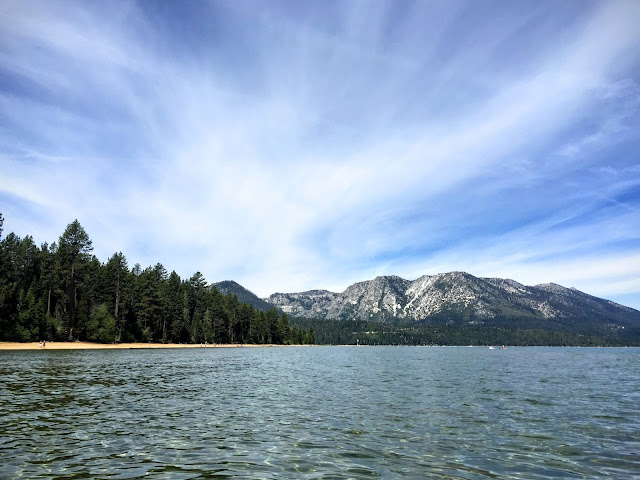 The water is so clear, so clear in fact that they say you can see objects 67 feet below the surface and I believe it. We stayed in the shallow waters and spent less time kayaking than we planned due to the tracking issues we were having, but it was still a blast and awesome to be out on the water. After a short trip, we packed it up and decided to go over to Fallen Leaf Lake. 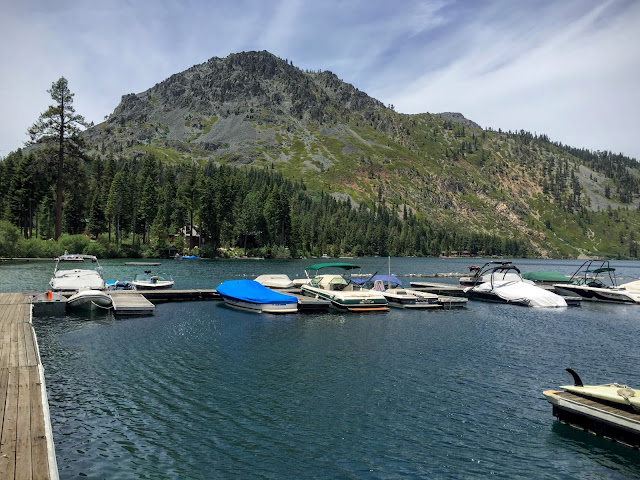 Fallen Leaf Lake is much smaller than Tahoe and at an elevation about 160 feet higher. The waters, if possible, seem even clearer. 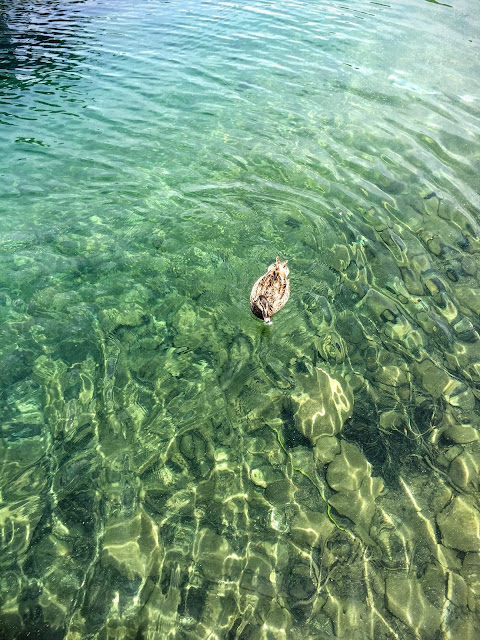 It's a quieter setting than Lake Tahoe even though its only a few miles away and I could have spent the entire weekend there. Instead, we walked around for a bit and then had an awesome lunch at a nearby lodge. They had the world's best hamburger! Next time, we will be going back and spending more time there. This lake especially had a lot of dogs enjoying the water and we've already decided to bring Kaiser along the next time we visit. He will love it! And, if I ever strike it rich, this lake might have to be my new home. As you can imagine, some of the area homes are something to see. I can't say I blame the wealthy either, this place is truly paradise. 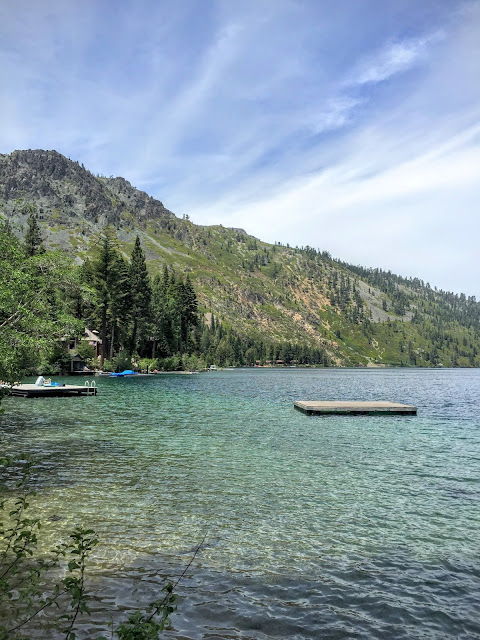 After lunch, we might have been overcome in a food coma and taken a short nap... But, afterwards, we quickly headed back to Lake Tahoe and over to Baldwin Beach for some fun in the sun. 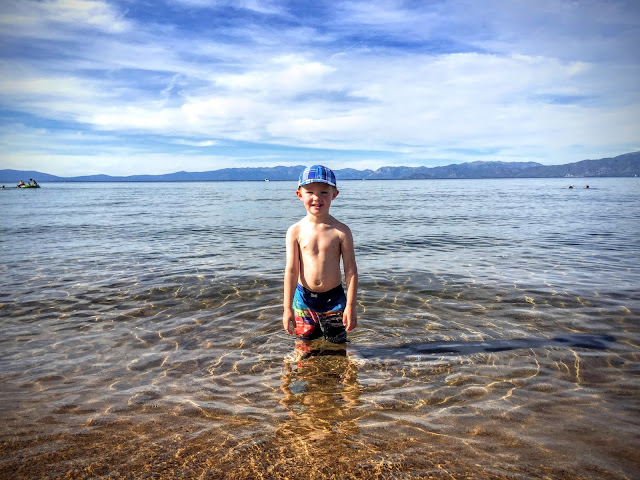 The water was cold, but the sun was warm and since it was very shallow, Landon loved playing in it. He has a new habit of going under over and again as you can watch below. He started at swim class and was more than happy to show off a bit in the Lake although I think the chill of water made him really have to amp up for it.

Eventually all that going under must have gotten to him though because we had to bring out the wet suit. Adam even got in a bit and threw Landon and played with him. It was all fun and games until we realized his phone was in his pocket, completely soaked and ruined. Still, Adam said Baldwin Beach was his favorite part of the weekend despite the loss. 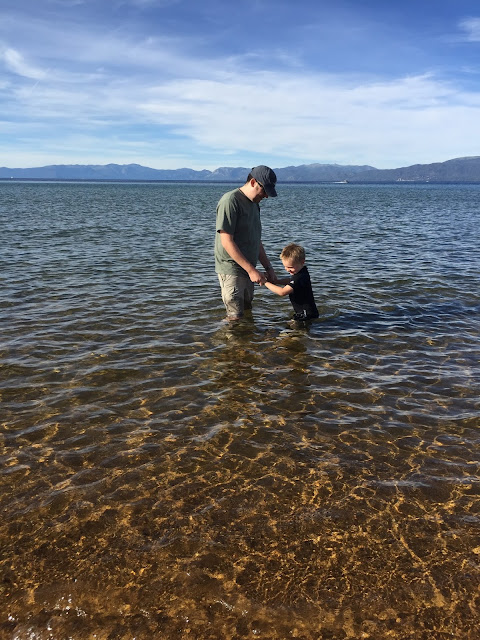 After the phone was ruined, we decided it would be best to go back to the campsite, make some dinner and relax. We stayed at a KOA  and, unlike the one in Santa Cruz, it was much more sparse with bigger campsites and more space between neighbors. It was really enjoyable which made the $60 per night fee a little easier to swallow (camping should never cost that much!). We also tried out a new tent this weekend which we will be using for an upcoming trip to Oregon. Our tent only holds 3 people, but this beast is rated for up to 8 people. We are convinced it can hold more, but there is no doubt the five us will have plenty of room. Landon loved the bigger tent and was sure to point out Taylor could come with us  camping now, little does he know he will be soon! 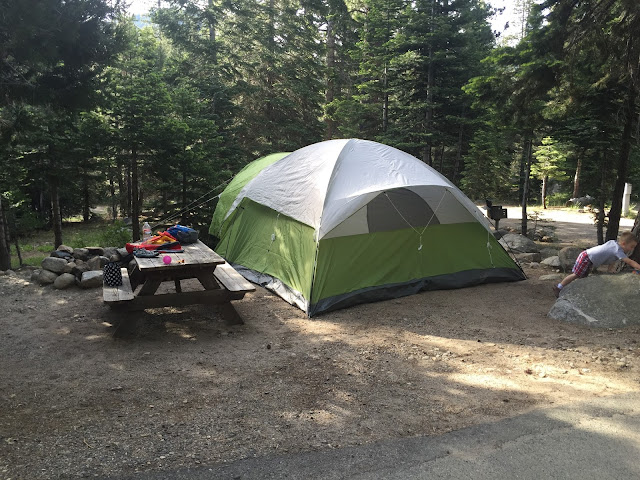 Saturday night, we had a hair brained idea to go out around 10pm and try to see some stars. We headed over to a famous rock about 40 minutes away, but when we got to the spot we realized 11pm was not the time to make an inaugural trip down to it. We scrapped it and tried to head back to Baldwin Beach only to find out they close it off at night. Just before 1 am we pulled back into our campsite, not a single picture taken. Being a passenger though allowed me to enjoy the orange crescent moon and start the entire time. You win some and you lose some, but it was still fun and another thing we will be adding to the list to do next time.


We woke up Sunday morning, packed up all our gear, got some breakfast and headed to the other side of the lake in search of peaking lupine. I had heard it was in full bloom, but we had been having trouble finding it. After trying to research a spot with no luck, asking multiple people with no luck, and not being able to find it in one sure spot, we had one last shot at a spot on the west side of lake. Heading that way, we drove up and around a large section of the lake and stopped at the overlook in Emerald Bay. It was a beautiful vantage point!! 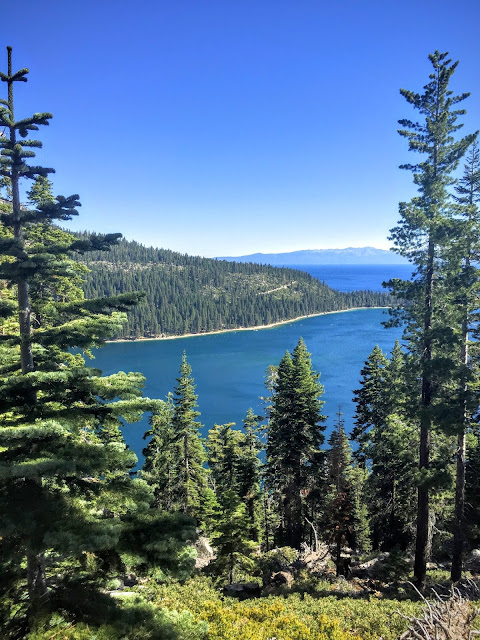 Emerald Bay is where we were trying to kayak the day before. Now we realized it would have been quite the large undertaking even with a better kayak, but we decided that next time we visit, we will go in closer to the bay and be sure to make our way there. After all, there is only one way to explore Lake Tahoe's only island, Fannette Island.

Another item for our next visit. We continued around the lake and over to Lake Forest to see the elusive lupine. Once we got there we were greeted to a beautiful purple field of lupines growing just a few feet from the waters edge. 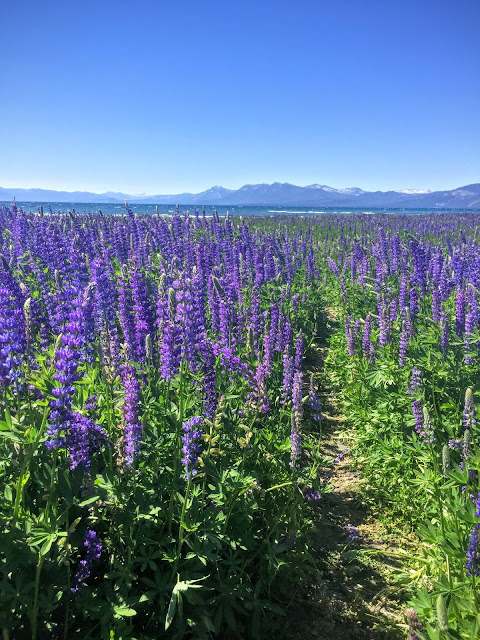 And it is impossible to show, but there were huge! Some towering over Landon who thought they were too pretty and was afraid to damage any of them. This is one of only a few pictures Adam took with his camera this weekend, The iphone takes great pictures, but nothing can bring out the color like he can.. 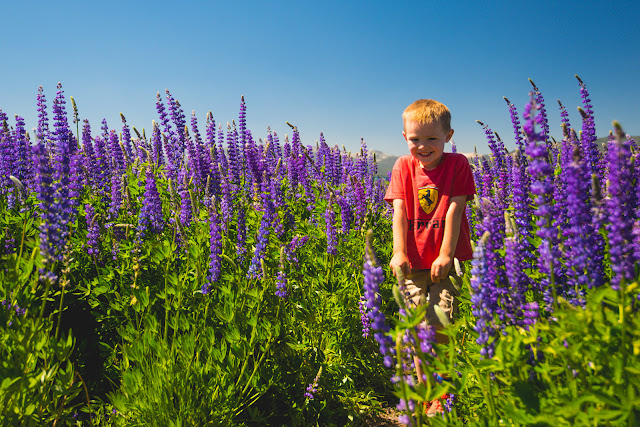 Believe it or not, they were even more vibrant in person, and the most spectacular shade of purple. 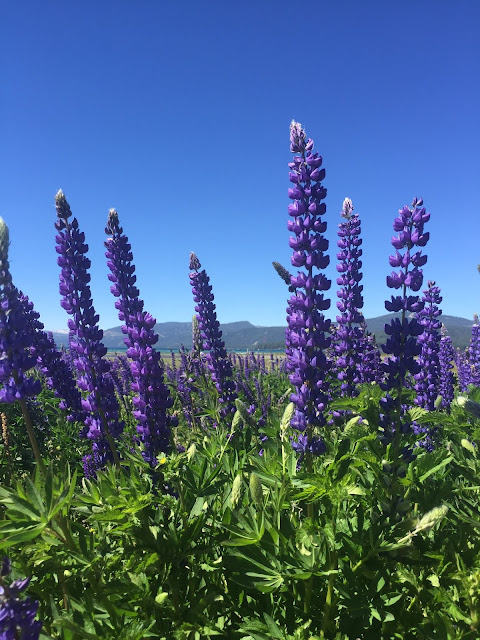 I could have stayed in this lupine field all day. The view of the lake from here wasn't half bad either. I love how the mountains form a perimeter all around the lake. It really helps to give it that Switzerland feel. 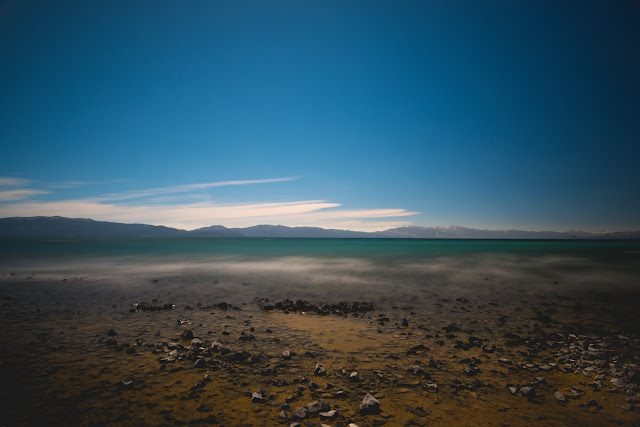 As much as I wanted to stay forever, we had to get home and before too long we were headed back on the road toward San Francisco. I can't believe it took us almost a year to visit Lake Tahoe, but I know we will back many, many times in the future. We've already planned to bring the dog, family and friends. We've decided to make a new tradition of camping over our anniversary since we've had such a good time doing it the last two years and we love any excuse to get out and camp. I think as long as we live in California, our anniversary camping trips may have to center here. California is stunning, but Tahoe is it's gem. 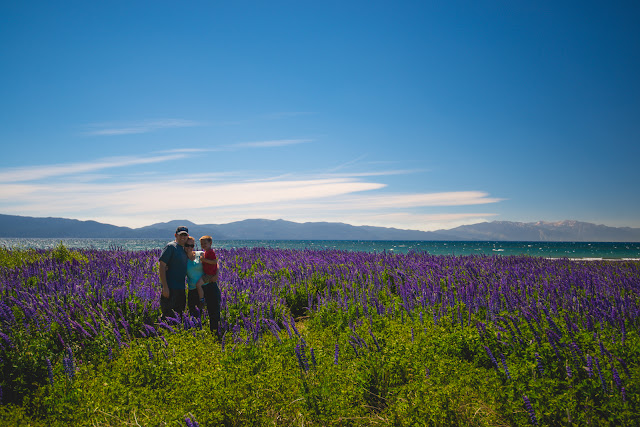 See you soon Tahoe- Love the Lewis Family!
Posted by Unknown at 2:02 PM