Sailboat Cruise on the Bay

Way, way back in March, when my Dad was visiting, we planned a special birthday gift for him; A sailboat cruise around the San Francisco Bay! 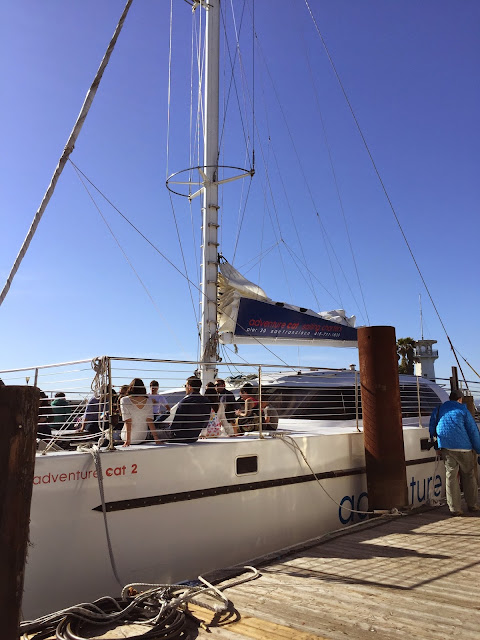 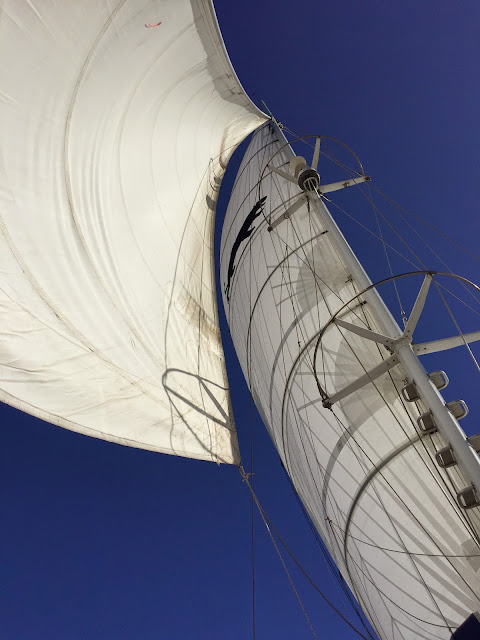 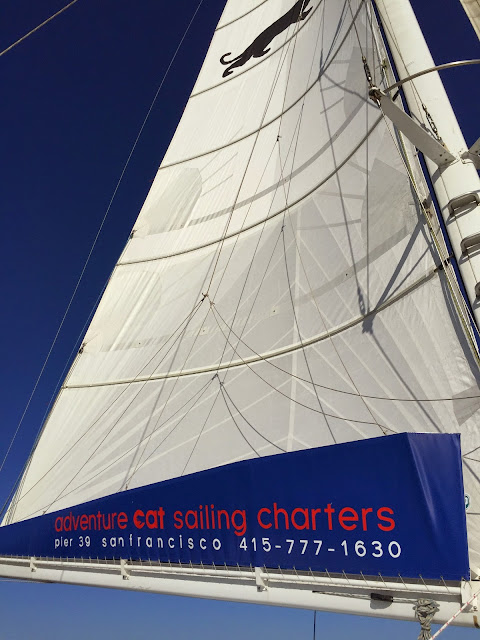 My Dad is the hardest person I know to get a gift for, but he has always loved sailboats. After seeing the hundred of sailboats in the bay everyday, I knew just what to get him this year since he was spending his birthday here with us. We booked a 90 minute Catamaran ride with Adventure Cat Sailing Charters. There were about 25 other people aboard the large catamaran, but given it's size it never felt crowded. Landon was super excited to go out on a boat, but once he got on, he wasn't too sure about the nets at the front that were open to the water below. 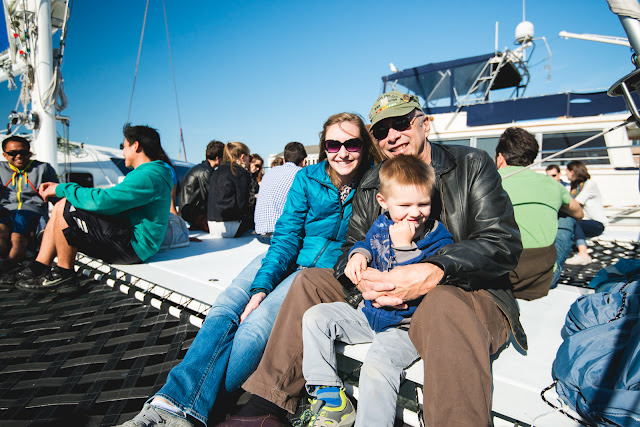 But, after watching some other people move around, being encourage by us, and after getting bored enough, he ventured out and discovered that all was well. Before too long, with the way he was enjoying it, you could be forgiven for mistaking the whole trip as a present to HIM rather than my Dad. 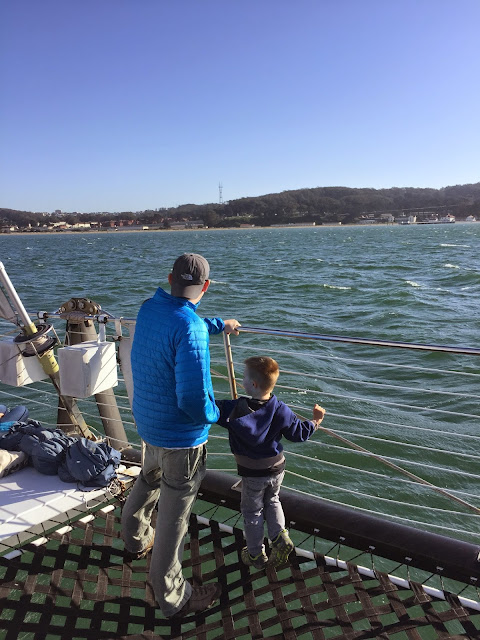 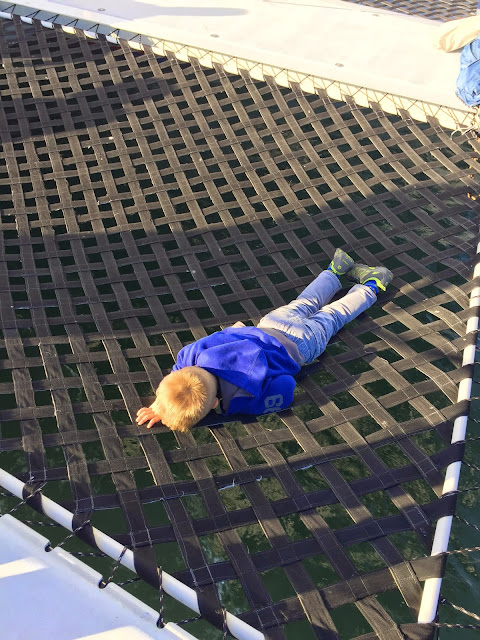 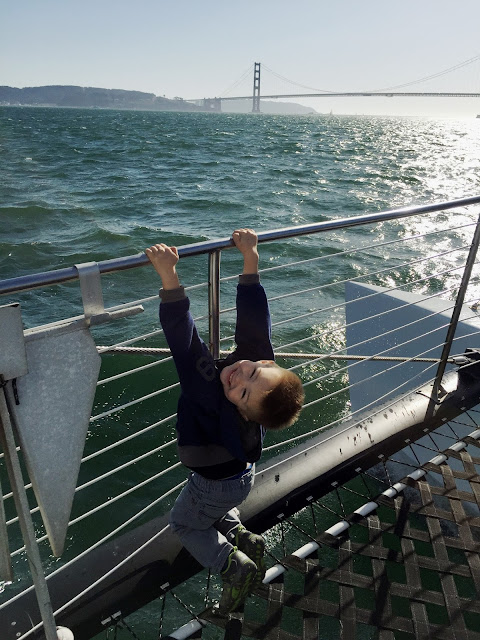 The San Francisco Bay has to be the best place in the US for a sailboat ride. As we headed out of the harobor, we passed the seals lounging and talking on Pier 39, then made our way around Alcatraz. Although we had visited the day before (see that post HERE), it was neat to travel all around the island and take it in from the other side. We were able to pick out places and spots of the prison from a different perspective. 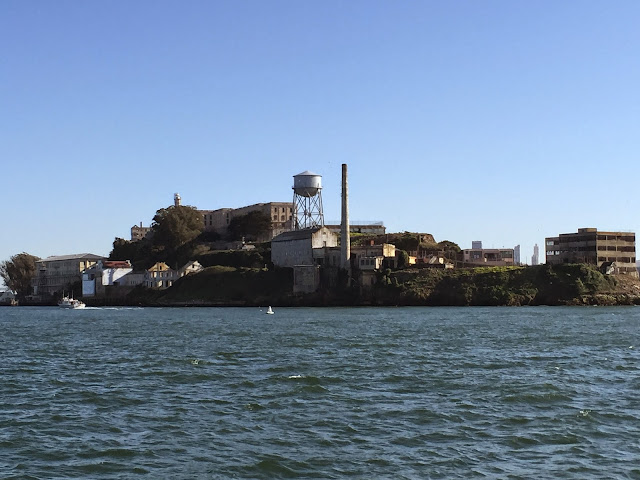 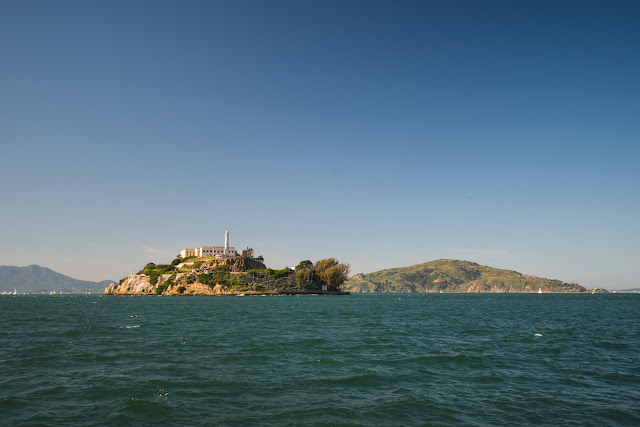 The highlight for me though was traveling under the Golden Gate bridge. 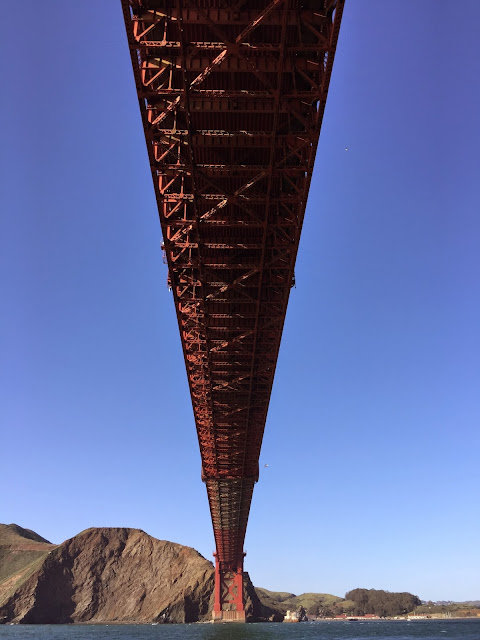 It is such an iconic structure and one I've become quite smitten with. Despite having traveled across the bridge many, many times and seeing it from a number of beautiful vantage points, there is something even more magical about the bridge viewed at water level. 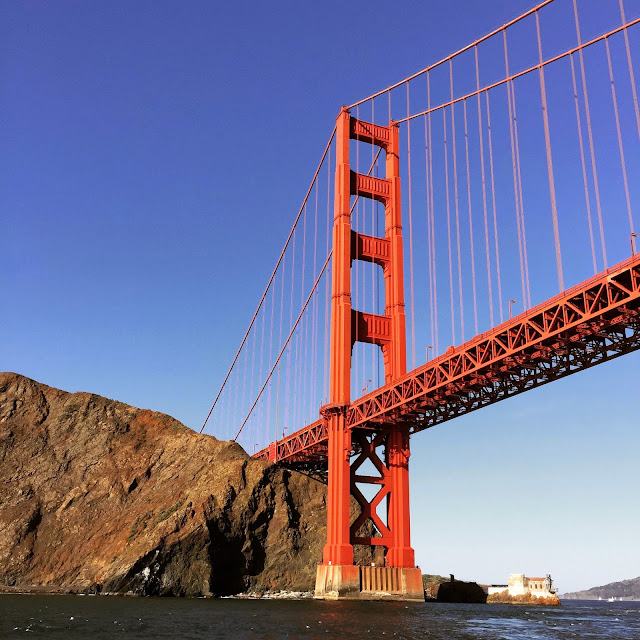 We lucked out and the weather was gorgeous for our 4pm cruise. Karl (the fog) was no where to be seen and visibility was wonderful. Despite the sunshine, moving at fast rate of speed on the water made it a little chilly. Luckily, we had all brought our jackets and the 90 minute ride was just the perfect amount of time to enjoy everything and not get too cold. 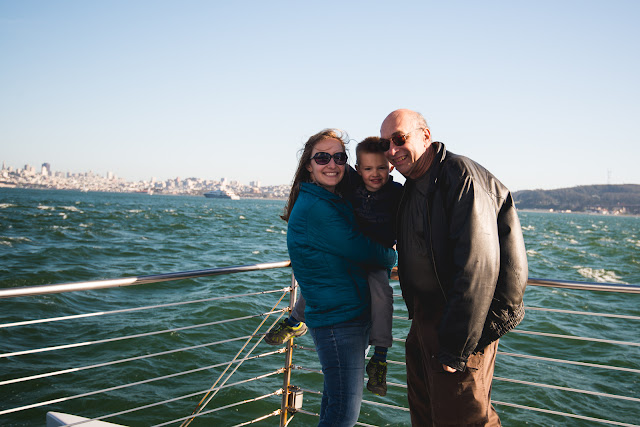 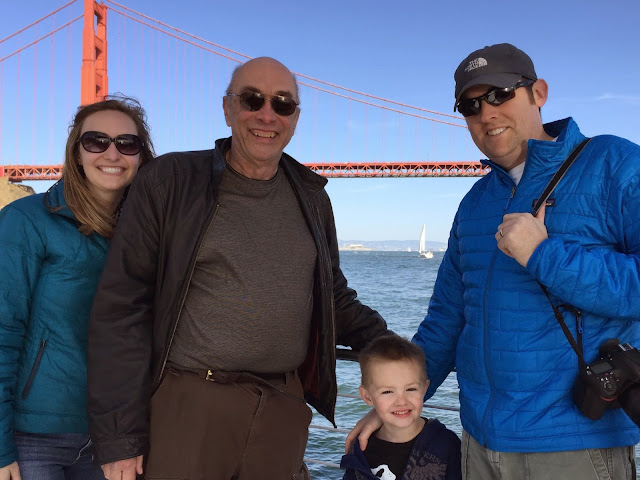 We took lots of pictures, played on the nets (trampolines if you ask Landon), and enjoyed the sunshine and beautiful views. They even let the birthday boy take the wheel for a few minutes. 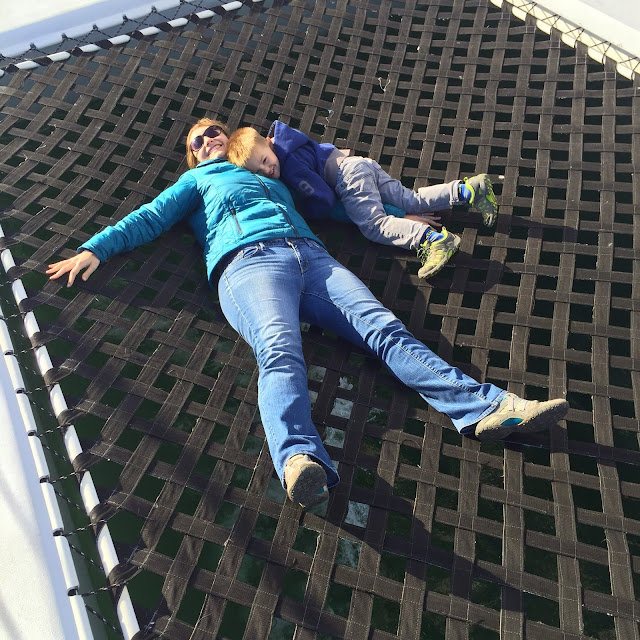 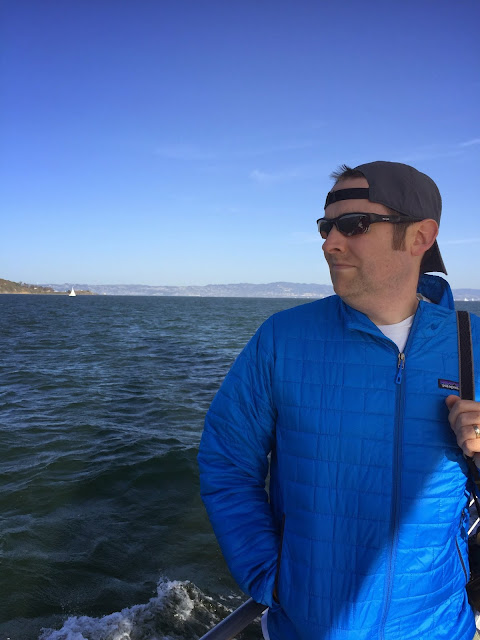 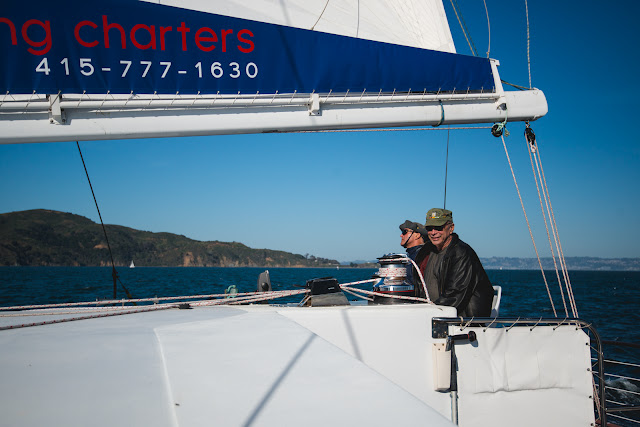 The captain made sure to take over before we got back to the pier and as we turned back to the harbor, we were afforded great views of the city. 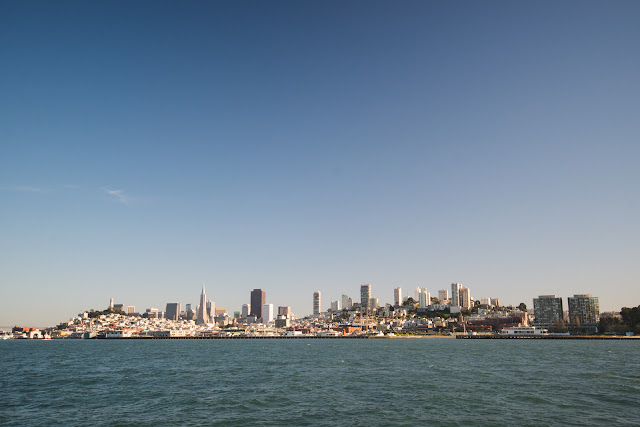 Since the boat took off and departed right from Pier 39, we left the sailboat and headed to one of the many nearby restaurants right on the pier. We had a special birthday dinner planned the next night, so we kept it a little more low key with Bubba Gunp Although a chain, the food is actually pretty darn good, and I keep going back for the Far Out Dip alone. 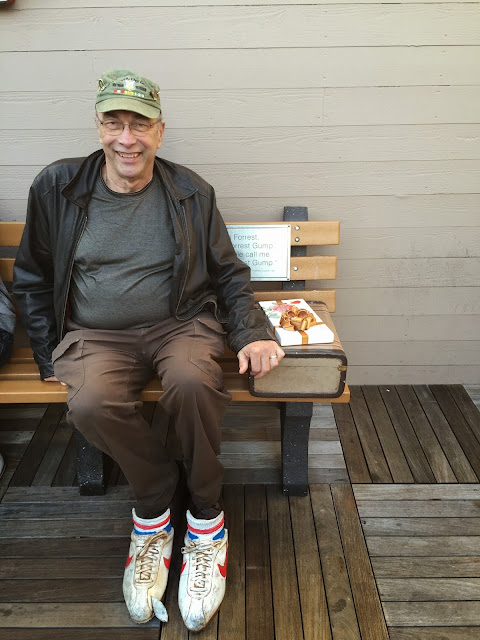 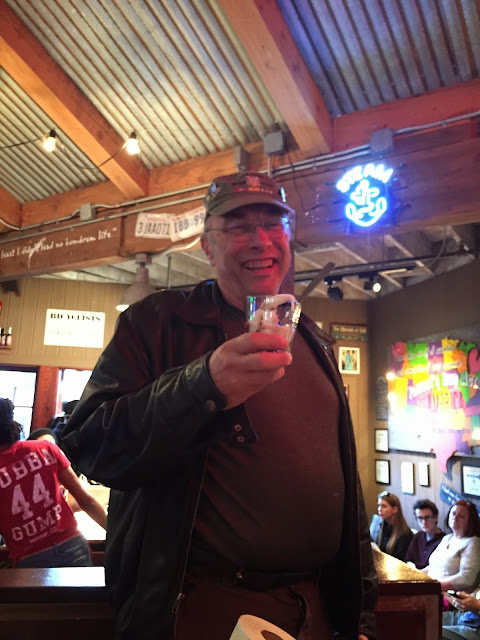 Like I said, the San Francisco Bay must be the best place in the US to ride on a sailboat. There are many options and tours to choose from. If you have the nerve (and the cash), you can even go out on a racing sailboat like THIS. Living Social and Groupon are constantly having deals for boat tours as well. If you are planning on a trip, I would highly recommend getting out on the water. It was something was something we planned especially for my Dad, but it ended up being an awesome experience for us all and a great way to see San Francisco. 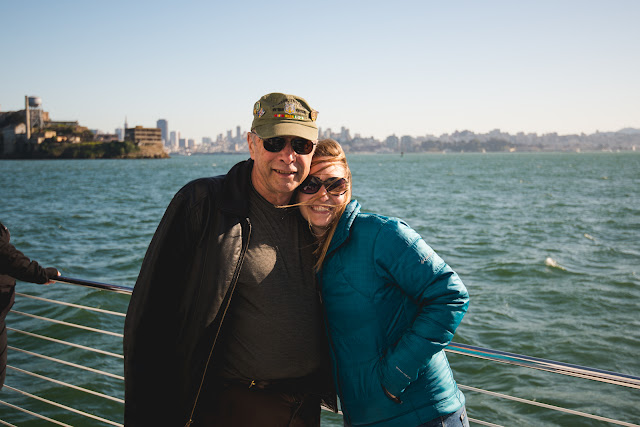