With our late night arrival to Mazama (the campground at Crater Lake), we were all anxious to get up and see America's deepest lake. 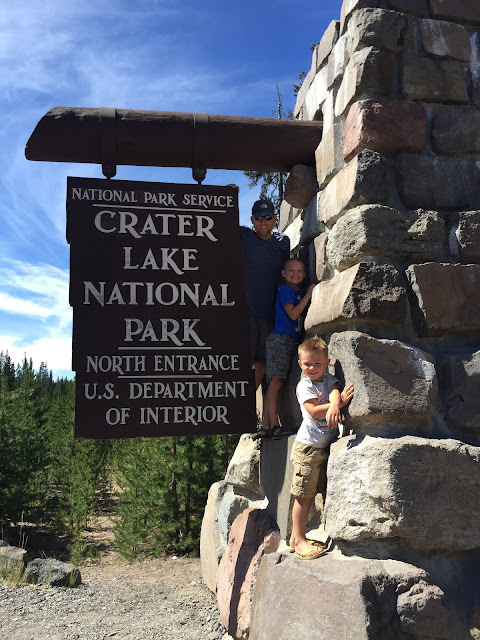 After stopping at the visitors center, we pulled onto the rim drive and got our first glimpse of the lake. 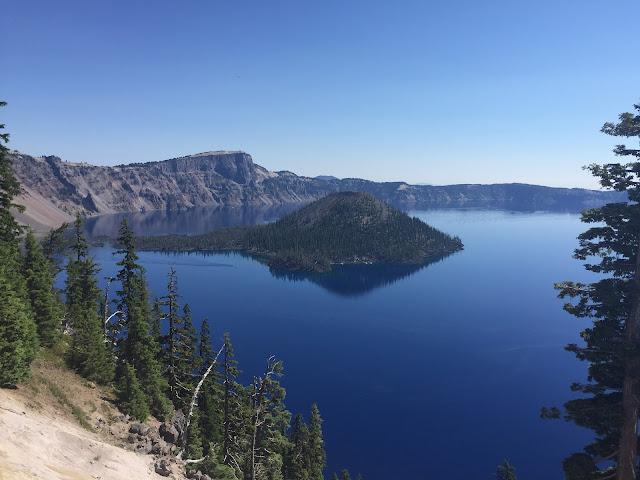 The most striking aspect of Crater Lake is the stunning deep blue water. And, despite its name, Crater Lake is actually a sunken caldera, which is not an extinct volcano but currently only dormant. We explained this to the boys and Landon was very impressed. He asked me just this week on the way to school if the volcano lake has woken up yet. I assured him it had not, but that we would know when it does.

Another stunning feature we immediately noticed around the lake are the snow markers. For this reason alone, Adam and I are going to be sure to come back and visit this beauty in the wintertime. 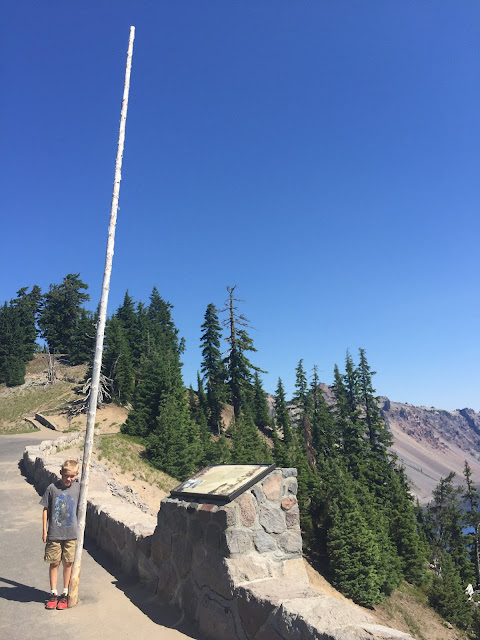 Adam had two hikes on his our to do list for Crater Lake, Watchman's Tower and Cleetwood Cove. One went straight up to the highest overlook in the park and the other went down to the water's edge. Both were about a mile one way and about the same steepness, just in opposite directions. We thought it best to do the hike up first. Cleetwood Cove, the hike that takes you down to the water is the only place on the lake where you can actually get into the water. So we decided we'd cool off after working up a sweat getting to the Watchman's Tower. We parked our car and headed up, to the tippy top which is literally a lookout facility for watching for forest fires. It's almost impossible to see in the picture so I added a nifty arrow to help out those eyeballs. 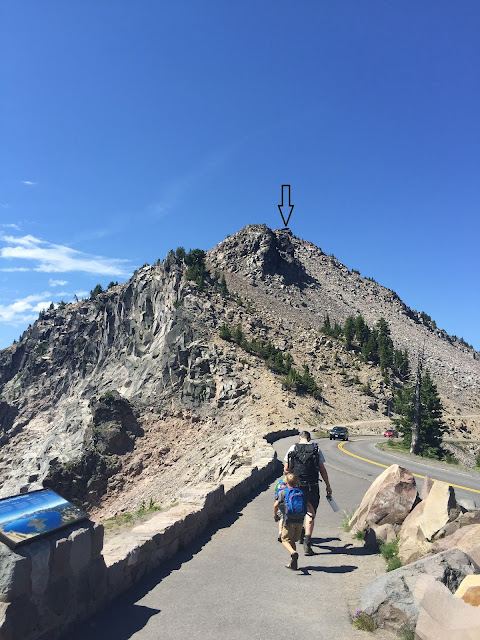 The path was wide and well marked. It started out long with the switchbacks getting shorter and shorter as it worked up the hill. 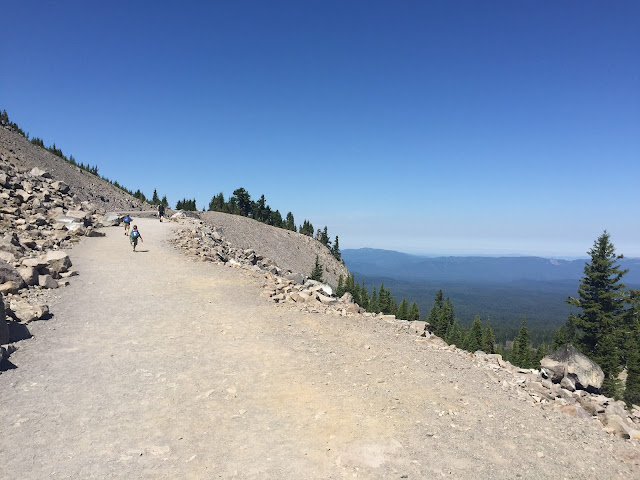 The views going up were not of the of the lake, but still pretty incredible. You see far away snow capped mountains and the curvy park road just below. 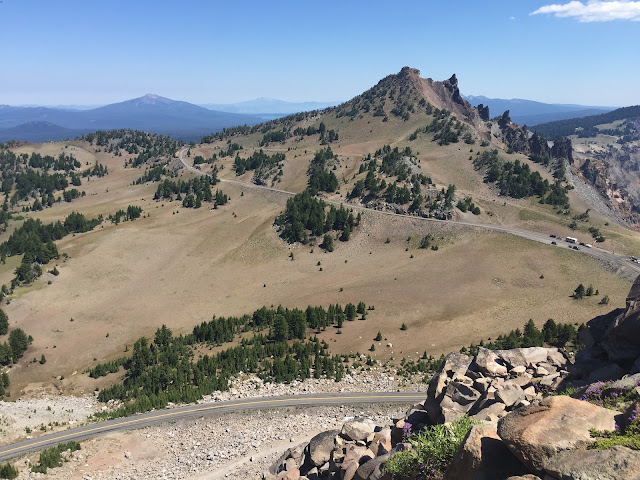 It took a little prompting to get Landon from stopping every few feet, but once we made it to the top, all the sweat was worth it. 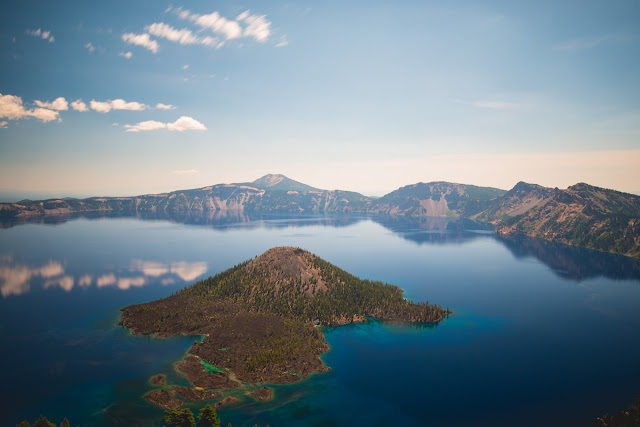 With a perfect view of Wizard Island right in front of us, we could see out over the vast lake. From above, the deep blue showed more variance and we could spot the shallow parts of the lake, especially around the island, by the lighter colored water. The widest part of the lake is 6 miles and from this viewpoint, the vastness really took hold, even for the boys. We read the information which stated that the deepest part of the lake is 1,943 ft deep and there are 5 trillion gallons of water in it. Try explaining that to a four year old when even you have a hard time grasping it!

We all played around on the top for a bit, Adam taking some pictures and the boys playing on the rocks. We even managed a video chat with some of our family so they could see Crater Lake too. At 92 years old, our favorite grandma can check that one off the list of places she has seen! 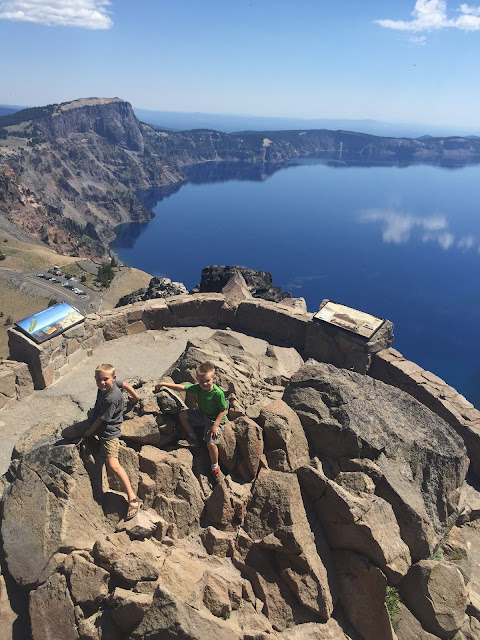 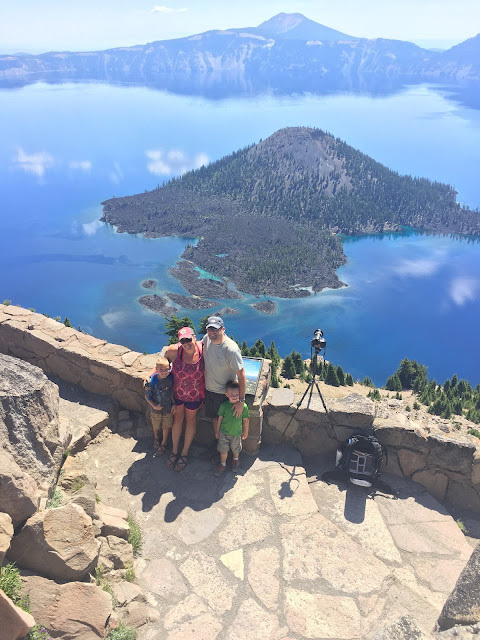 After hanging out at the top for a bit, it was time for the easy part, heading back down. This part, the boys did happily. 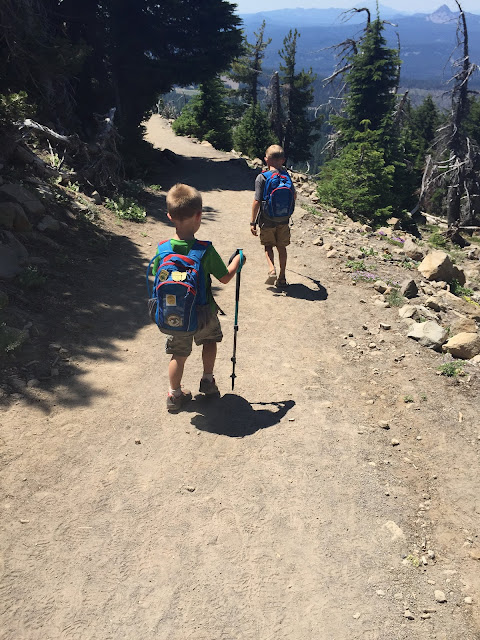 By now, it was the middle of the day and pretty hot. We wanted to get some lunch and decided a change of plans was needed. Instead of hiking down to Cleetwood Cove, to try and swim in the notoriously freezing cold water that is Crater Lake, we decided to go ahead and drive to our next campsite for the night, Diamond Lake. Just outside the park boundaries, we figured we could have some lunch and let the boys play in Diamond Lake for some of the afternoon. It was a very good choice too. We all had a blast spending the afternoon at Diamond Lake. 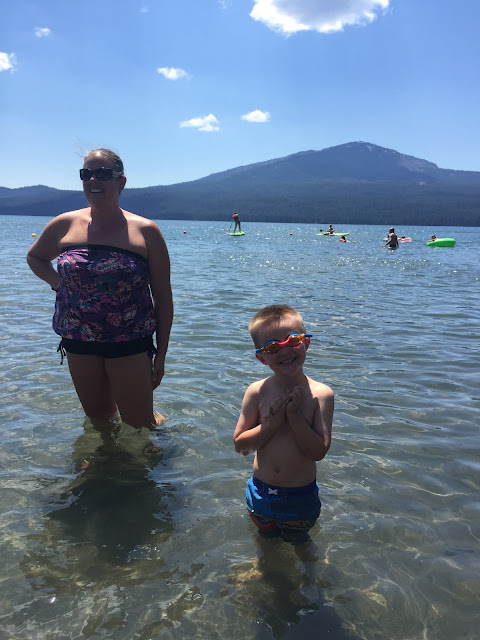 With a little bit of snow still visible on Diamond Peak just off the lake, it was no surprise that this water was still a bit chilly. But it was also shallow a good distance out and after wading around for a few minutes it was pretty enjoyable. It was only a few minutes before Landon and Taylor were swimming all around and going under. Children just don't seem to care when it comes to playing in water. 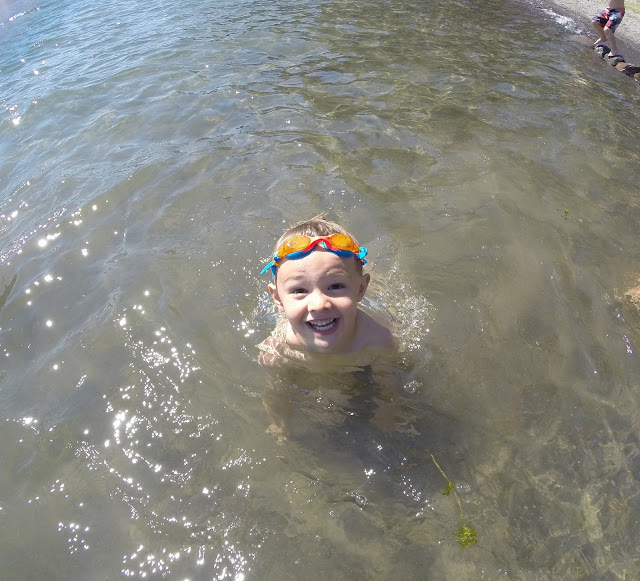 They had a few boats, kayaks and paddleboards for rent so we decided to give paddleboarding a try. We rented two paddleboards and had the boys sit on the front while we did all the hard work. 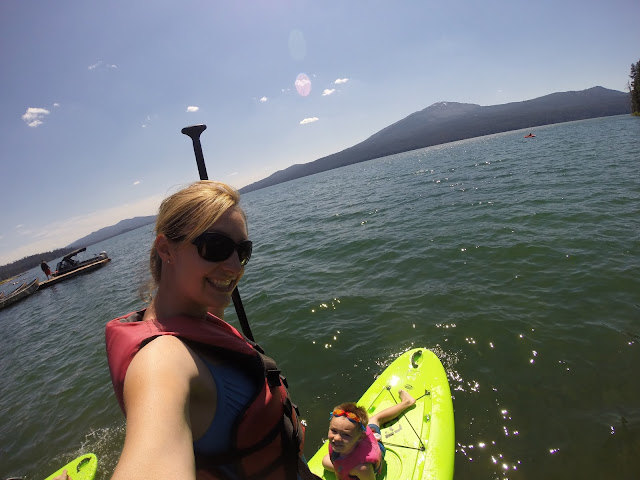 It was a lot of fun and Landon really enjoyed it. After a little bit Katherine traded with Adam so he could give it a try. Notice the difference in Taylor's face between his Mom being at the wheel and his Uncle? What does that tell you? 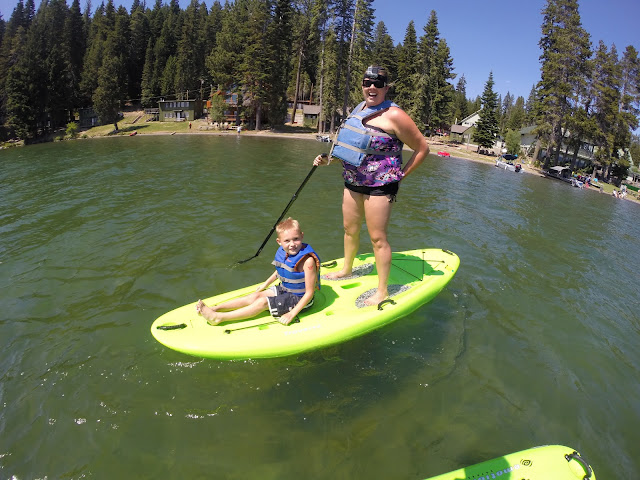 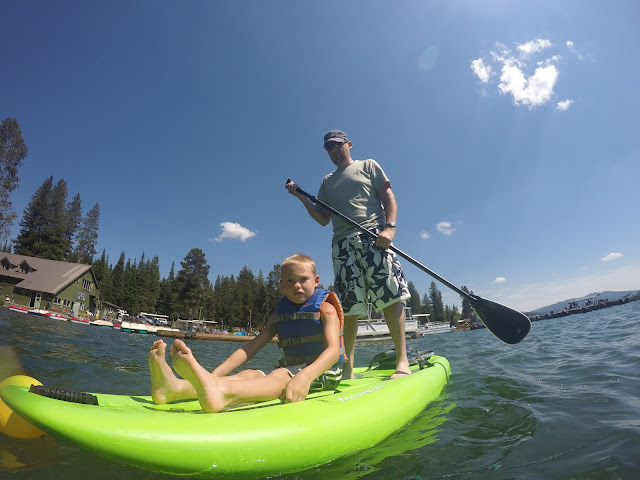 I'm just playing, everyone enjoyed it. It was a little harder than I imagined especially because the slightest bit of wind and wake will really push you in a certain direction. Next time, I think I'll sit on the front and make Landon steer me around the lake. If that doesn't work then I'll stick to kayaking. 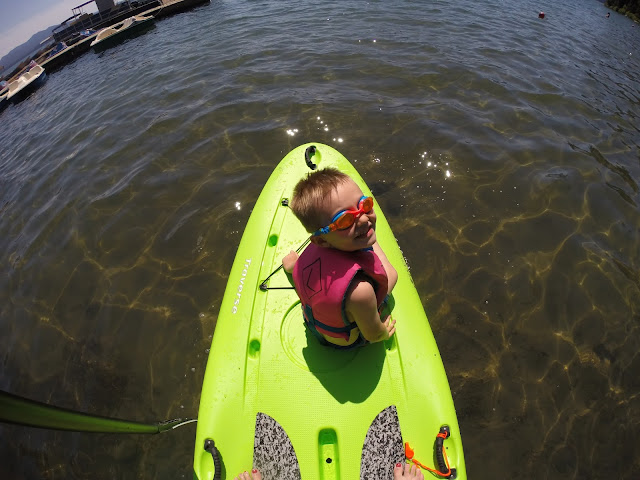 After sometime in the water, we enjoyed some fun in the sun for a bit. 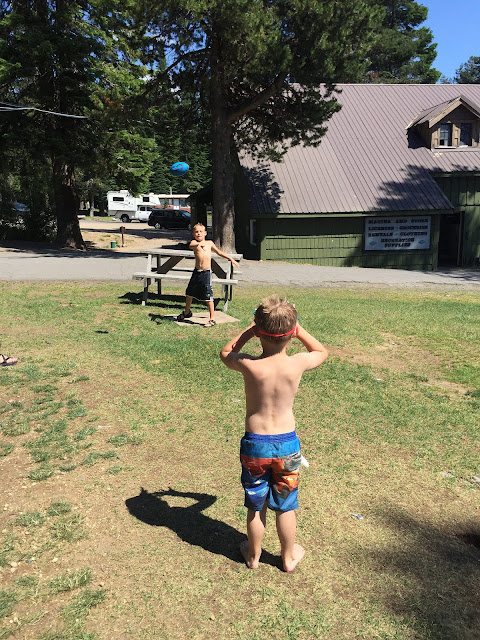 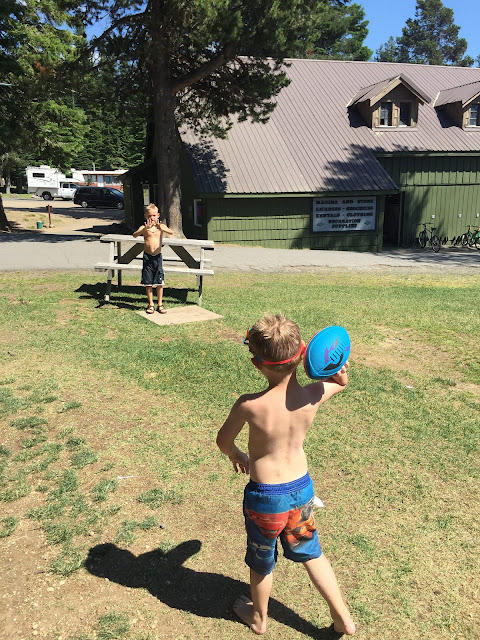 Around 4pm we headed back to Crater Lake so Taylor could get his Junior Ranger badge. We also toured around the lake a little more and stopped at the Phantom Ship overlook. 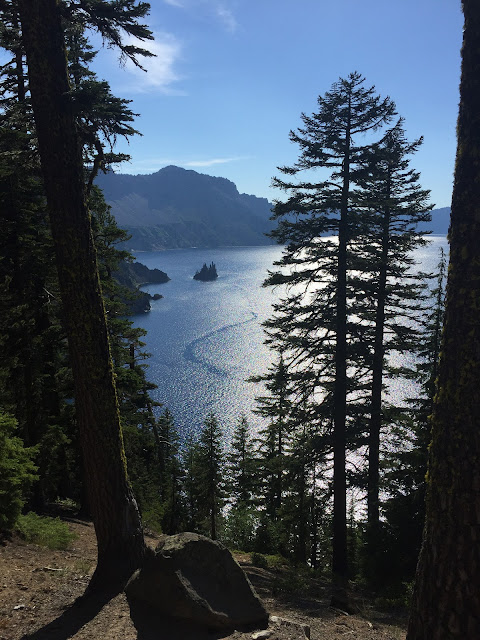 I meant to read and figure out why this island looks as if it is sailing away, but never did. This ghost trail never disappears and although the island is 500 ft long, it really does look like a ship just sailing away from this vantage point. It was actually pretty neat and I'm glad we made a point to see it.

By now, we had worked up quite the appetite so we headed back to camp for some hamburgers, corn, and potatoes. If we proved one thing on this trip it was that you don't have to sacrifice good food when camping. Katherine proved to be quite the outdoor chef, cooking up all kinds of good meals throughout. The rest of us just kicked back and enjoyed ourselves. 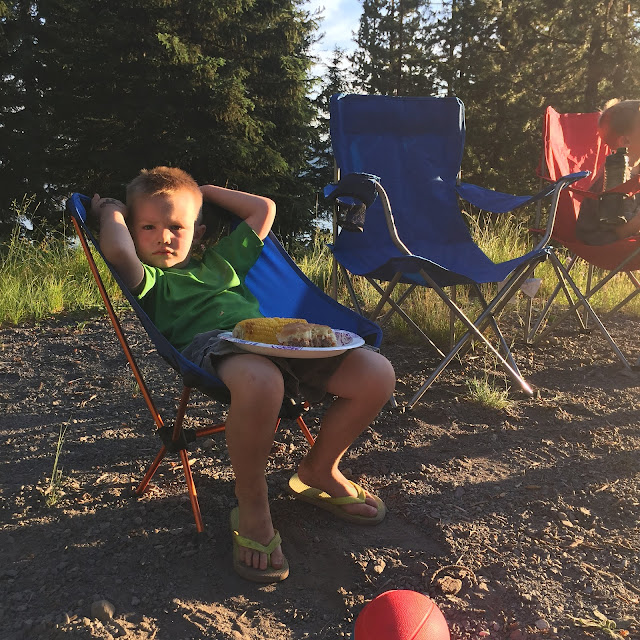 Adam really wanted to back to Crater Lake to get a picture at sunset. We originally thought we would hike back to the top of Watchman's Tower and stay late until the night (2am or so) to get some pictures of the stars. I packed our backpacking stove and some hot chocolate in preparation and Katherine stayed with the boys so they could have a normal nights sleep. We left our campsite a little later than anticipated and didn't make to the top of the watchtower in time for sunset, but we did make it to the rim in time to witness an amazing sunset and then to watch twilight unfold.

The only downside? ... The millions, maybe even BILLIONS, of misquotes that were swarming the area right at this time. I'm not sure what brought them on as we hadn't noticed any early in the day, but people were literally covered with misquotes if they didn't have bug spray. At one point, I just sat ours out for anyone that wanted to use it and pleaded with one poor guy to put some on. A nice family of three was prepared with bug nets and ended up taking their family portrait in front of the lake with the bug nets over their face. It was so bad in fact that we scrapped our plans for the night and headed back to camp instead. Even though our plans didn't go exactly as planned,we were not too disappointed. Crater Lake was everything and more than we thought it would be. We ended our visit with the most amazing farewell and prepared to make our way to another beautiful area of Oregon; Mt. Hood. Our visit to Crater Lake was short, but it's one we will be making again and again. I cannot wait to see it dressed in white, although it will be tough for it to be any prettier than this. 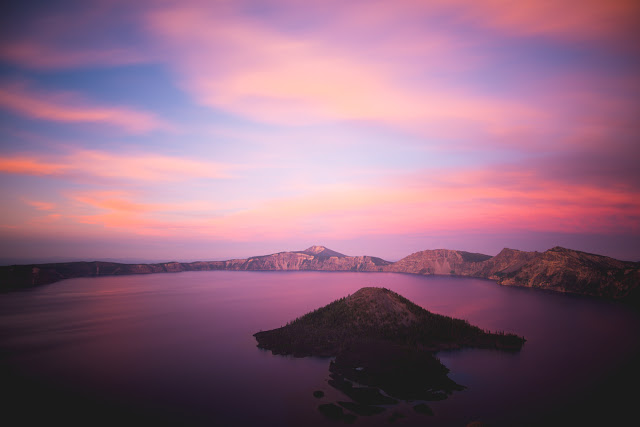