A family vacation, a road trip, or even a camping trip can be a lot of fun, but it can also spell disaster. Lucky for us, it was 99.999% fun, but we did have one day that just didn't go quite as planned.

We woke up early at Diamond Lake already feeling the heat of the sun. Since we planned to continue up to Mt. Hood that day, we packed everything up and headed out. Along the way, we had planned to spend a good part of the day hiking at Smith Rock State Park. The only problem? Smith Rock is in central Oregon which is basically desert. After stopping at an REI and a Walmart to restock some supplies, we arrived at 2pm and the hottest part of the day. 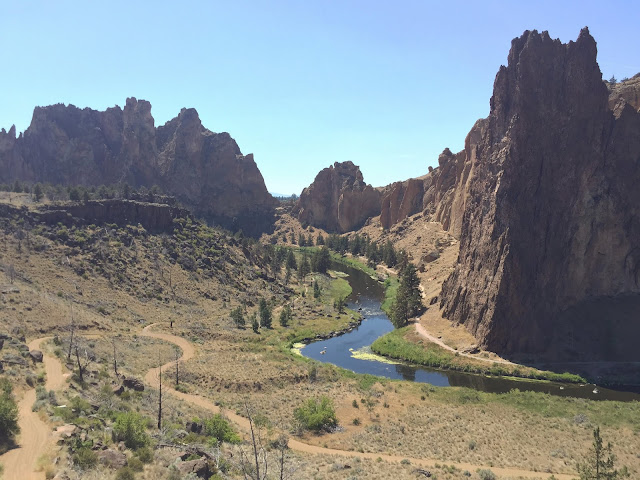 The river running through the park looked inviting, but the hike down to it did not. As I've stated, we've adapted to the weather on the peninsula here in San Francisco and in the 100 degree heat, I didn't want to do anything. We made some lunch and enjoyed the view from the shade of a tree and while the boys kept busy on a rock wall, while we contemplated what to do. 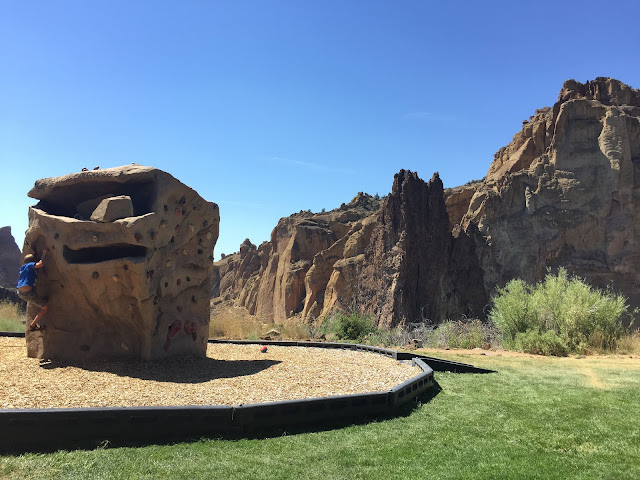 In the end, we decided it was just too hot to do our planned hike. After the boys got out a little energy, we got back into the car and headed to the cooler temperatures in the Mt. Hood region.
Overall, the boys were awesome in the car through all our hours of driving, entertaining themselves with games like go fish. 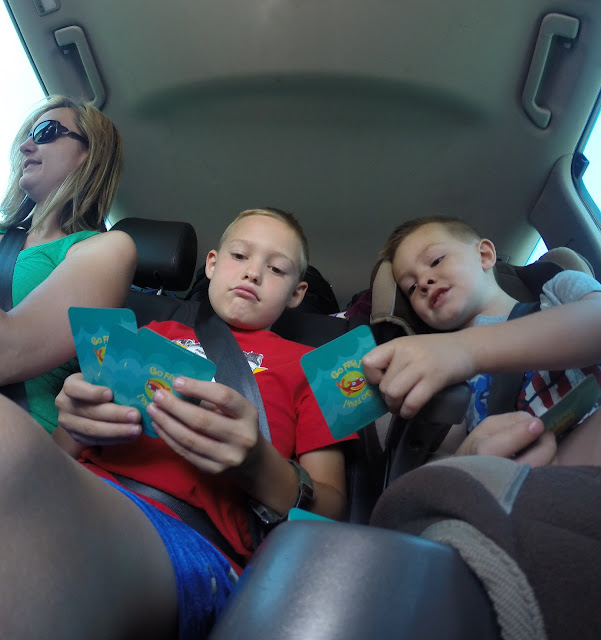 As we climbed up the mountains, only 30 minutes away from our next campground, the car started to have trouble. At first, it felt like the transmission was slipping and then suddenly, on a steep incline, the car was struggling to get power. We pulled over at a gas station where miraculously we had cell phone service, but just barely. Not 100% sure what was going on, we were really concerned about driving it further down road, breaking down, and having no way to get a tow truck. Instead, we decided it would be best to call AAA (thanks Mom!) and have our car towed to a local shop to get an inspection. We were already planning on spending 3 days around Mt. Hood so we figured it wouldn't be a huge setback. At 5:30 pm we called in for a tow and started to check around at nearby (less than 2 hours away) dealerships to see if anyone could check out our car. The main problem, it was closing time on July 3rd the day before a long holiday weekend and every place was closed. Needless to say, the mood in the car quickly changed. 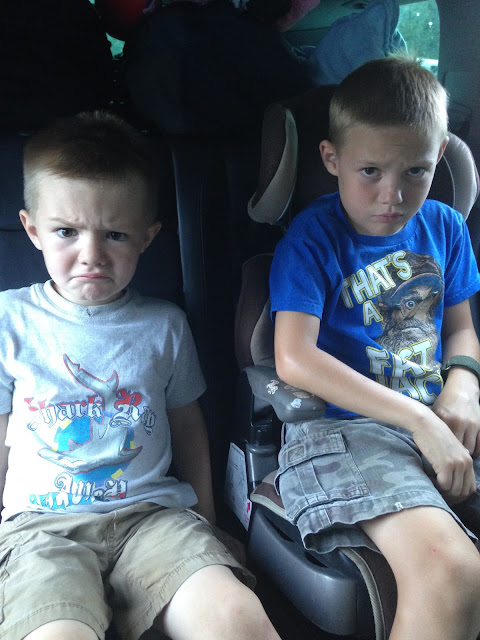 Just kidding! Well, actually it did go south for a second, but then we found a place that seemed like they could help us and we let the boys go into the gas station, pick out one treat and one drink, and they spent the time in the parking lot happy as could be with some sugar in their systems. They really spent the hours looking more like this... 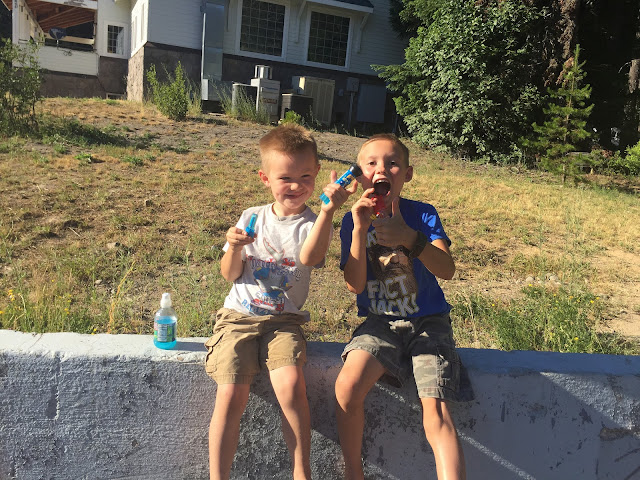 As we sat in the parking lot another stranded vehicle was there waiting for a tow as well. After an hour, their tow truck pulled up only to have to turn back due to overheating issues of its own. This couple had two kids of their own in the back, but they were not human kids; They had just picked up two pygmy fainting goats who were crated in the back of their SUV bawling up a storm. They made our boys seem very behaved. HA! They were pretty cute and it took everything I had not to ask if we could try to scare them. That would have really helped the time go by faster.

After two hours, we called to find out it would be another hour. After three hours, we called to find out it would be another 45 minutes. At this point, it was 9PM and were not sure the tow truck would ever make it. The sun was fading quickly and we just decided to go for it and try and drive the car. We headed back in the right direction and were soon driving down the mountain, as it turned out we were pretty much at the peak. The best news, the car seemed to be operating just fine. We pulled into the first place we came across for a well deserved dinner.  During dinner, we decided to needed to end this day in the best way possible. 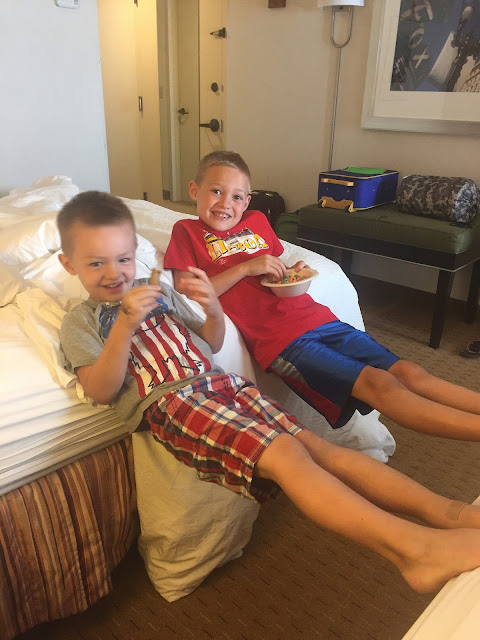 We ditched our campsite for the night, decided we deserved a really restful nights sleep (and more importantly a SHOWER) and booked a hotel. We all desperately needed a shower, but some even more than others. 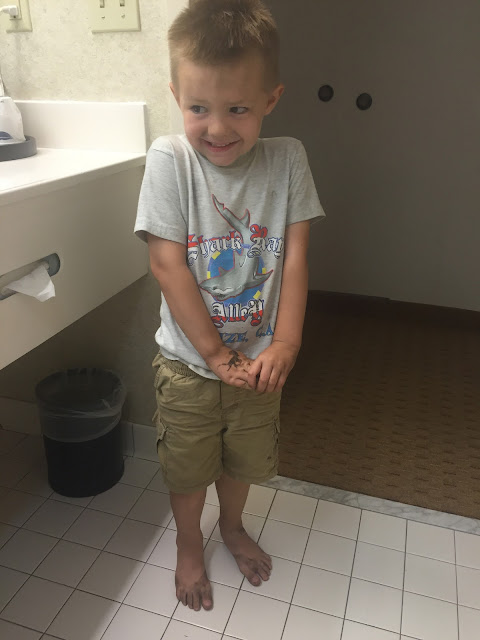 We love and have embraced camping outside, but lets face it, we are people of the modern world and also love a warm shower. We woke up the next morning, a little more refreshed, a lot more clean, and ready for a new day. 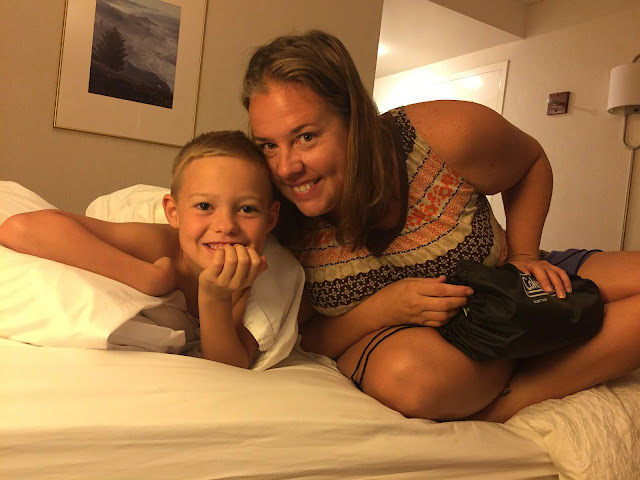 We headed back to Mt. Hood and to our campground for the next two nights on Lost Lake. This was our first time, not car camping (camping with your car right nearby). Our campsite was only a short hike from our spot, but the distance made for a much more scenic and quiet camping experience. Of course, it also meant having to lug all our stuff to and from the car and being quite a good grip away from the bathrooms. Thankfully, boys made up the majority of this group so going potty wasn't an issue for most. It was so nice being surrounded by massive pine trees and nature. We took some time to get our stuff setup before having some fun for the day. 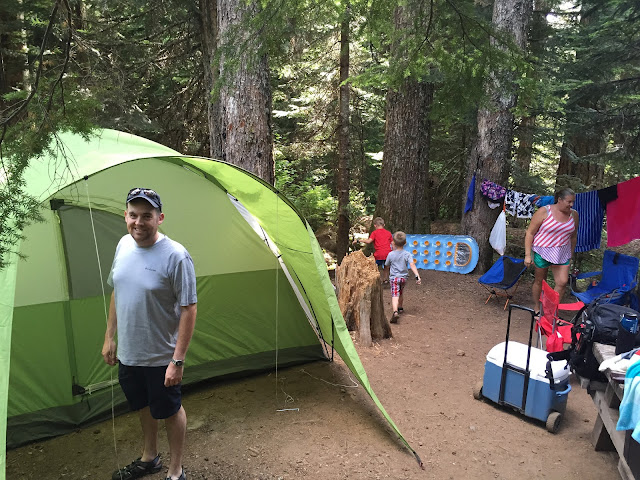 Did I mention, the day we arrived was 4th of July? We knew we wouldn't be celebrating in the traditional sense since fireworks in a forest are a very bad idea, and actually illegal, but still had an all American day. 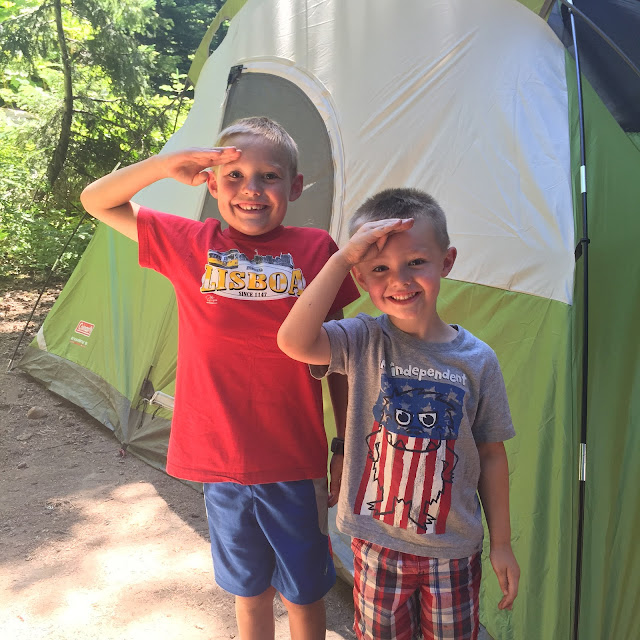 We spent the afternoon hanging out in Lost Lake. 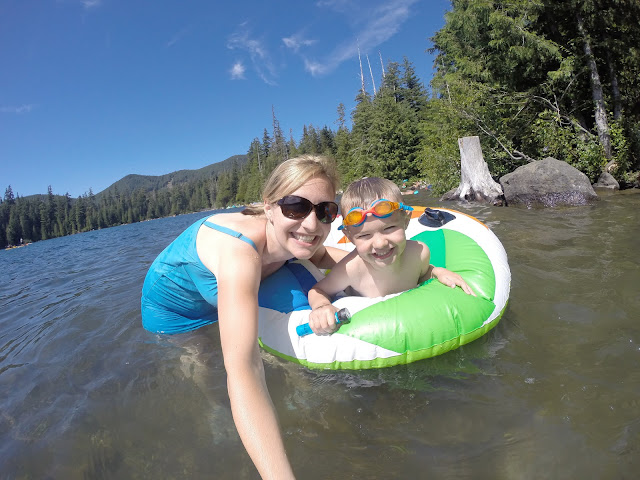 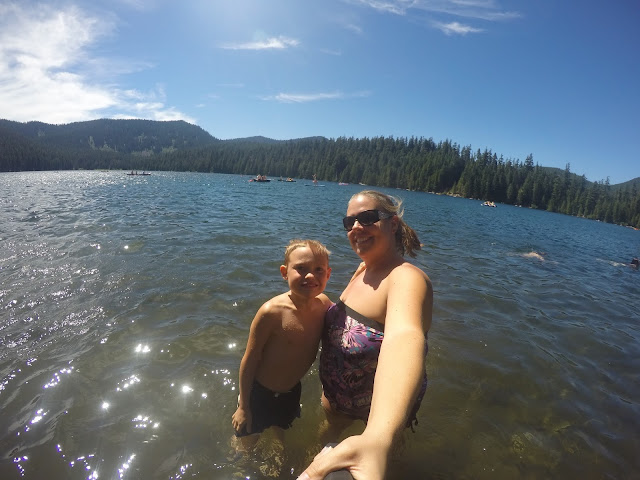 The water at lost lake was cold, but once we got in we had to swim to the middle to get a good view of Mt. Hood. What a spectacular site it was too! I don't know if there is anything more beautiful in nature than a snow capped mountain reflected by an alpine lake. After our swim, Adam walked around the lake to take a few pictures. 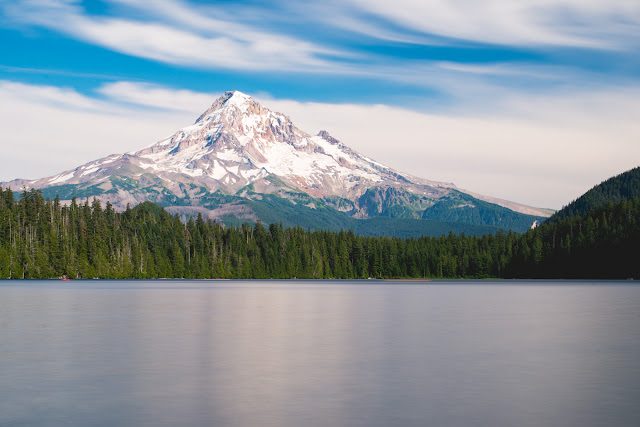 We went back our campsite, dried out, played around for bit and made some dinner. Now that Adam had seen Mt. Hood, he was dying to get some sunset pictures. He heard of a wonderful hike nearby that was supposed to give you the best view of Mt. Hood. Despite only being 2 miles to the top, it was a 1,500 ft elevation gain which meant the entire hike was uphill. While it wasn't the hardest hike we had done, we knew it would be a lot for the boys and so Katherine stayed with them at the campsite while we started up at 7:30pm just in time to witness the sun setting. 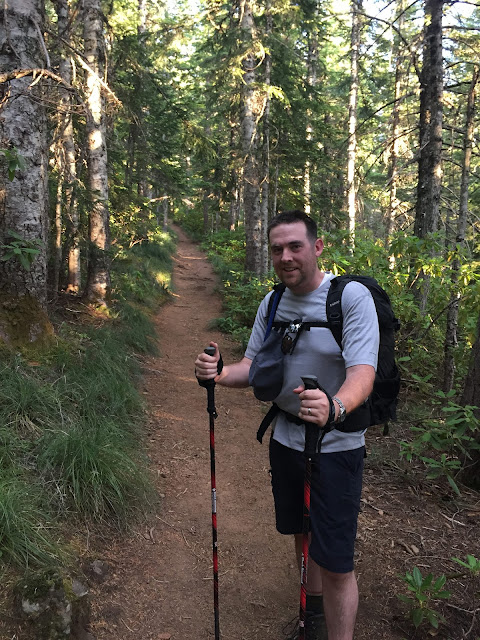 The hike was very peaceful. We only passed 4 people the entire time up and they were all making their way down before darkness set in. If it were not for the constant uphill climb, it would have been very enjoyable. I just kept hoping for a bit of a flat part so I could catch my breath. It never happened and Adam refused to stop! He's such a machine! I just kept hoping that once we reached the top, it would be all worthwhile. I got my answer 40 minutes later. During the hike up, we hadn't been able to see anything outside of the forest, but as we made our way to the end of the trail, the trees parted and the most beautiful view of Mt. Hood was sprawled out right before us.

Massive Christmas Trees surrounded us in every direction, so close we could smell them, touch them, and count the endless pines cones hanging on. 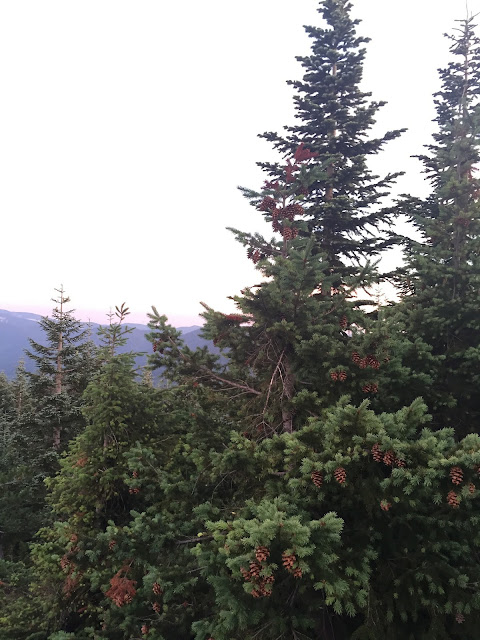 For a while, we just stopped and enjoyed the view. Catching our breath and cooling off a bit. Poor Adam works a bit harder, lugging his 30 pound camera bag everywhere we go. At least his sweat looks like a bunny on his back. 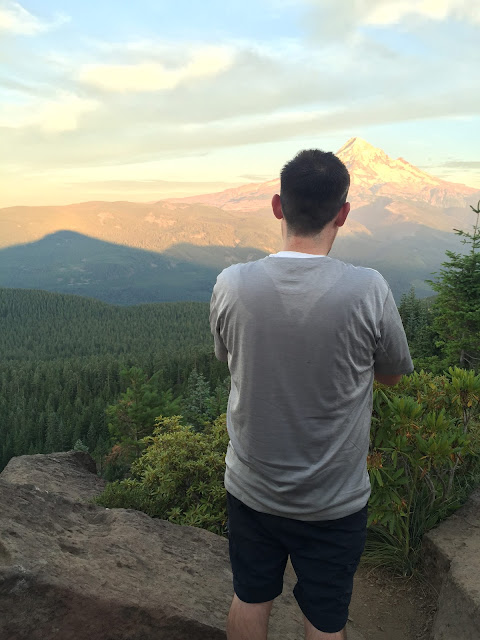 We settled in for a most spectacular sunset and he put that extra weight to good use. 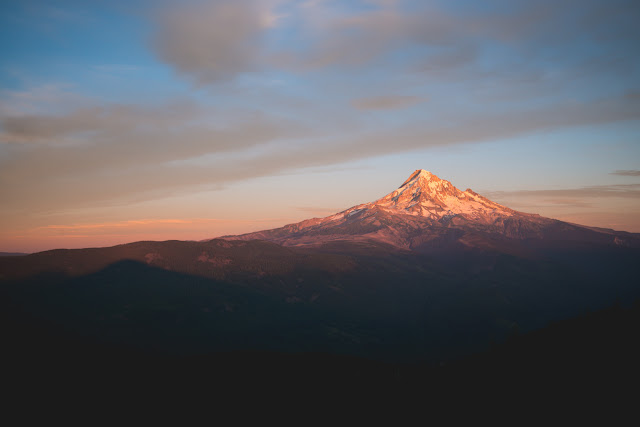 The sunset was amazing, but even more amazing is the twilight that happens after the sunsets. 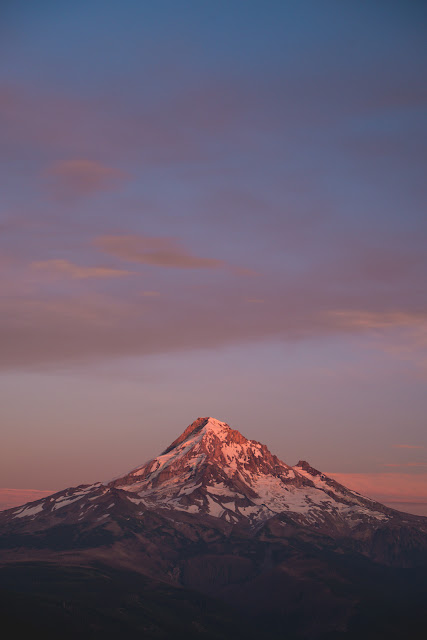 We had witnessed at amazing sunset at Crater Lake, but here, perched way up in the forest with this spectacular spot all to ourselves, it was a new level of amazing. And, being so far North means the twilight lingers longer than it does at home so we sat for 1.5 hours, mesmerized by the fading light. 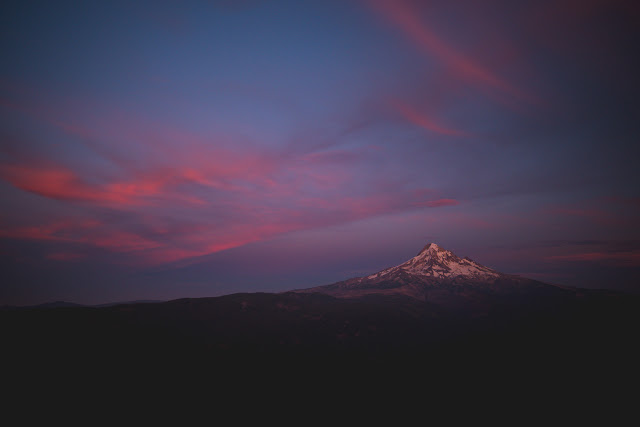 Even if I knew every word, in every language, I would not be able to adequately describe nature's beauty. Antoli Boukreev, a famous mountaineer said, "Mountains are not stadiums where I satisfy my ambition to achieve. They are cathedrals where I practice my religion." I don't have to be on the top of the mountain, to be defying gravity, or witnessing a miracle to feel the power and presence of God. All I have to do is sit still, to listen to the birds, to watch the sun set and clouds play against the sky as the stars begin to rise. Nothing makes me feel more small, more humbled, and more amazed at this world, a world that we so easily take for granted.  For me, it is a moment in time, I will always remember and forever cherish.

At 10pm when the last bit of light was setting way off on our right, we could see a small town's fireworks begin. For 30 minutes, we watched a town about 30-40 miles in the distance, celebrating 4th of July. We couldn't smell them or hear them, but the colors and the shapes were visible even in the distance. And since we were literally perched on the side of a mountain, when the sun began to set, we put on our headlamps. Safety first! 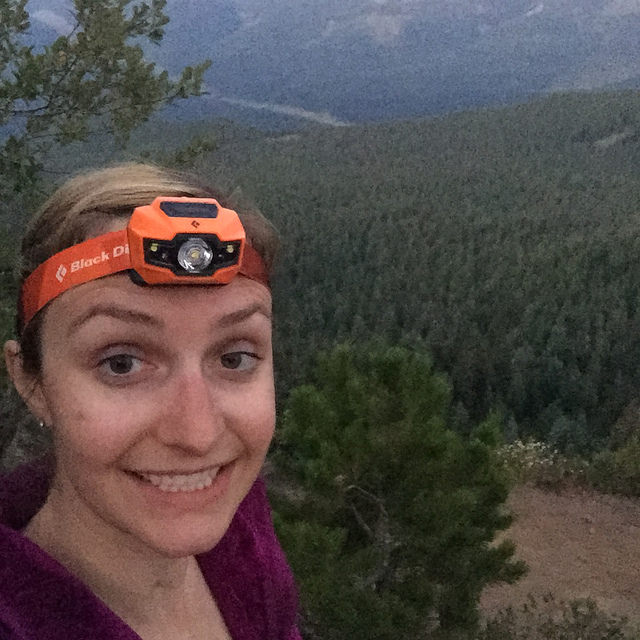 As the stars started to make their appearance, we pulled out our star chart app on our phone and tried to pick out the constellations. 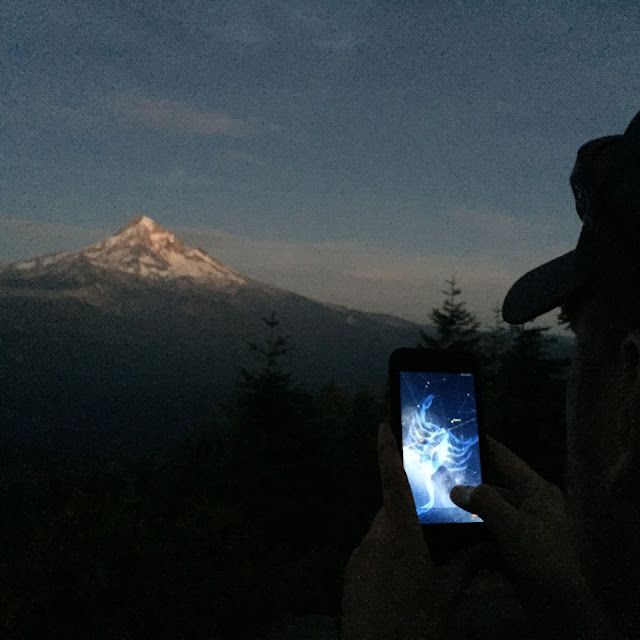 It wasn't long before we could make out a number of constellations. The beauty of the sunset may have faded, but the night sky was a whole 'nother sight to behold. If it were not for the other three people in our party being down at the campsite, we would have stayed in our spot all night, our eyes stuck open. I hope in the next few years we can begin to spend more time in remote places like this and enjoy them all night long. For now, we are limited to what our little man can do and were happy to have been able to do it at all. After a few night sky pictures, we took one last look and said goodbye to our new favorite place on Earth. A quick 30 minute hike down and we were back to our car and shortly thereafter asleep in our tents. Dreaming of the events of the day and those ahead. 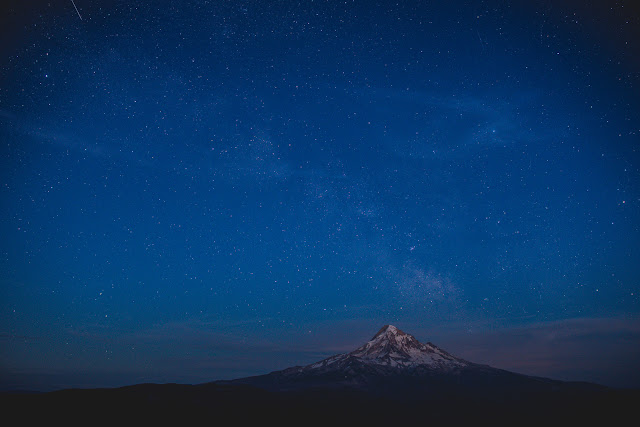