Friday evening was a tough one in the Lewis house. Landon didn't listen at school and then threw a fit over his punishment when he got home. Adam didn't get home until late and by then I was frustrated and had to check out while he took over the parenting duties for the night. I had been wanting to check out the farmer's market at the Ferry Building for sometime and when I mentioned I wanted to go Saturday morning, Adam suggested I take a break and go alone while he watched Landon. I never like going out on my own, but I needed a break. Walking around for hours and trying to get Landon not to touch everything wouldn't have been fun for either of us, but it was a great place for me to go and check out alone. I spent my entire morning soaking it all in wondering why it took me so long to check it out.

I took Bart from our back yard (literally) to the Embarcadero station and when I came out of the subway, I was immediately greeted with tents and people selling all kinds of stuff. 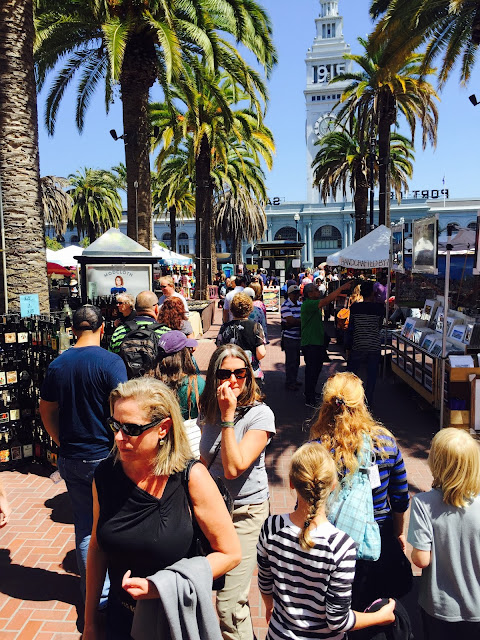 The farmer's market surrounds the ferry building, but all around the area people set up tents selling artwork, crafts, and just about everything else. I walked up and down a few aisles looking mainly at the artwork, but tried not to waste too much time outside of the main event. I crossed the streets of cable cars and headed into the ferry building. 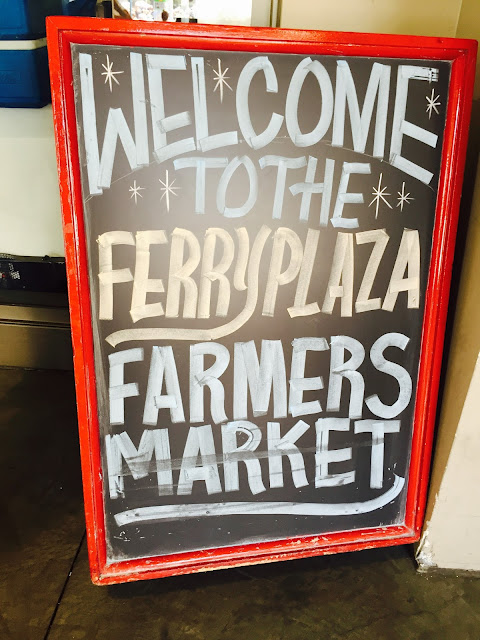 Inside the ferry building are more permanent shops and eateries and outside is the market. I made my way inside first to have a look around. It's a popular place to hang out on a Saturday morning for locals and tourist alike. 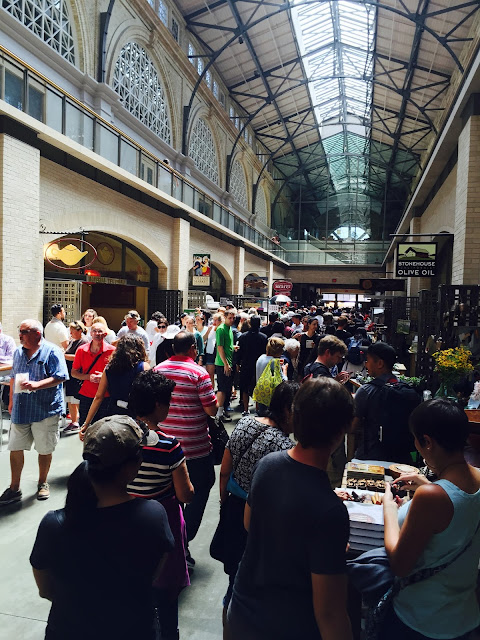 Oddly enough, except for waiting in line for the bathroom, it never felt overly crowded inside. I think it was because I was so engrossed with all the stores. Inside were all kinds of specialty stores, many with local items, and all with things a little more unique. One of my favorites was the mushroom store, Far West Fungi. 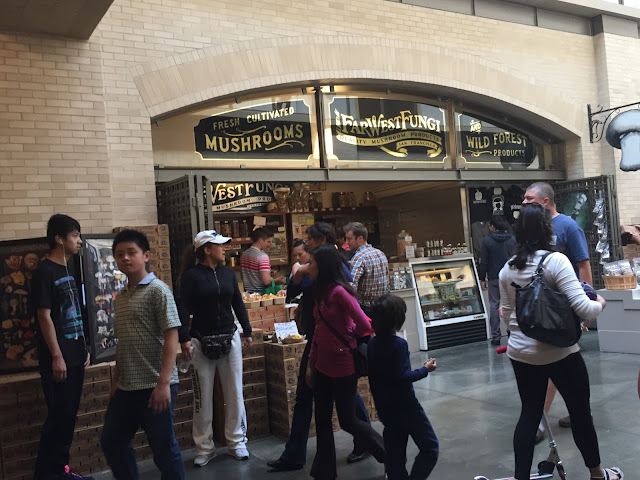 I've developed a taste for mushrooms but I don't cook them at home. I made a note that this is my go to place when I start to venture into them more. They sold assorted baskets and even mini-farms to grow your own. 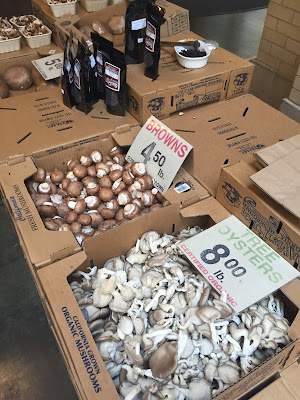 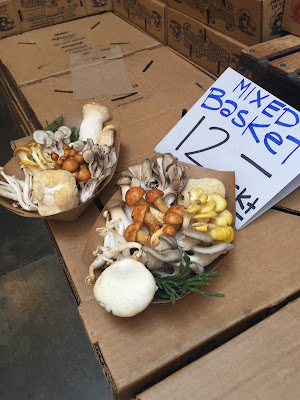 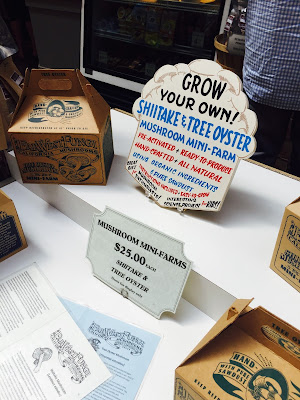 Another favorite shop of mine was the Cowgirl Creamery cheese shop. Cheese is my favorite food next to chocolate. 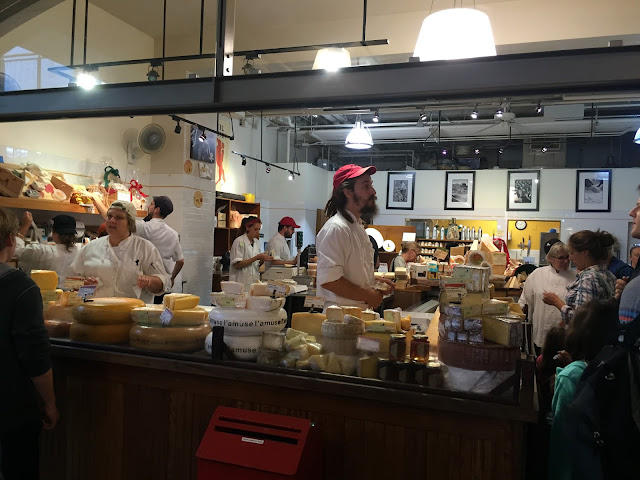 There were so many different types of cheeses and I haven't mentioned the best part yet...you can sample just about anything! Samples are either laid out or you just simply ask. Everyone was so helpful and nice. 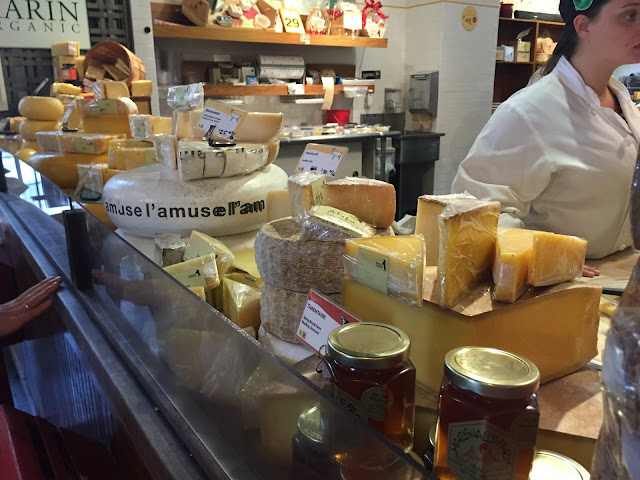 The Cowgirl also has an eatery where you can indulge in a number of cheese rich dishes. They even melted the cheese right over your dish. Drool! And if you want some meat to go with that cheese there are a number of meat shops including Boccalone which sells "tasty salted pig parts" 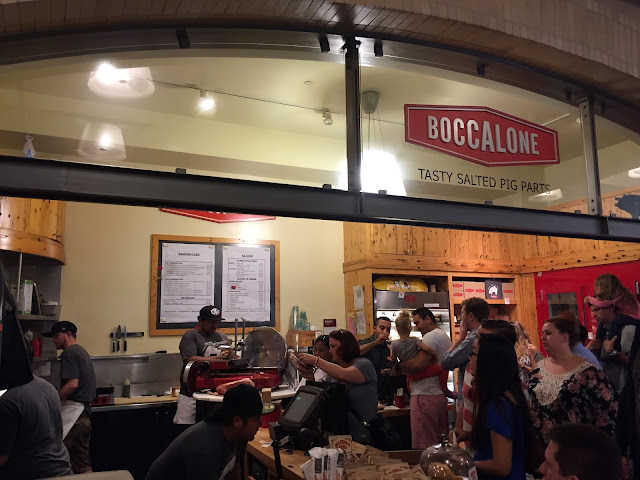 They had a deli that was obviously a crowd pleaser. And if you are wanting some tasty pig parts for later, they have plenty on the racks waiting to be taken home. 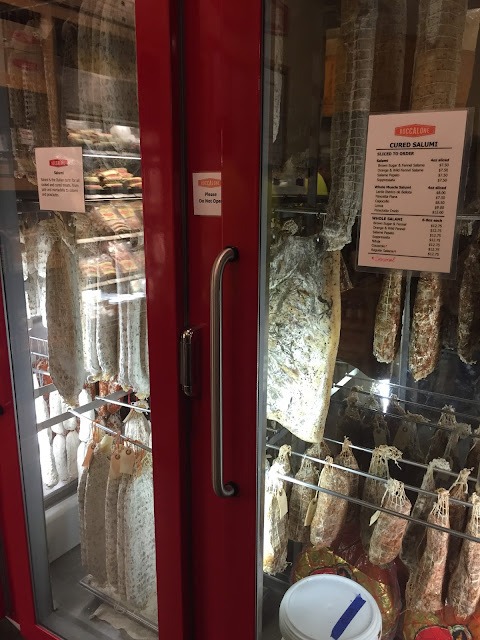 I decided after looking around at the all the food and non-food items, that this is the perfect place to do some holiday shopping. They have a little something for everyone from flavored olive oils, sampleable of course. 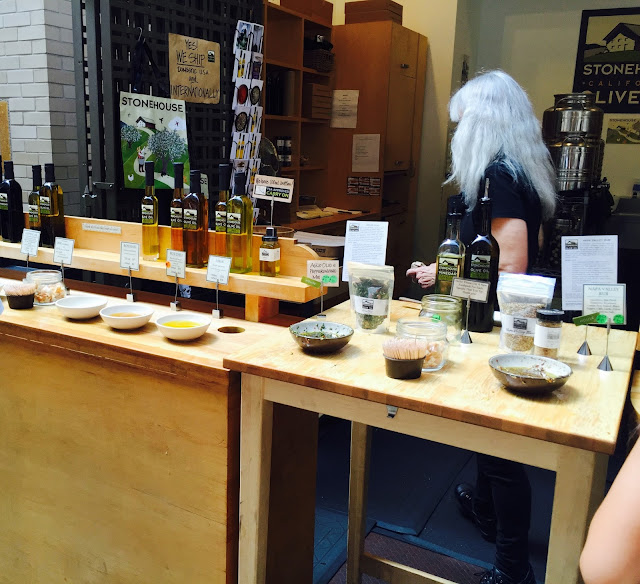 To jams, honeys, and preseves. This store jam with and without alcohol. I sampled the wine jams and loved them all. The peach was probably my favorite and I already have one person in mind for the apricot flavor. 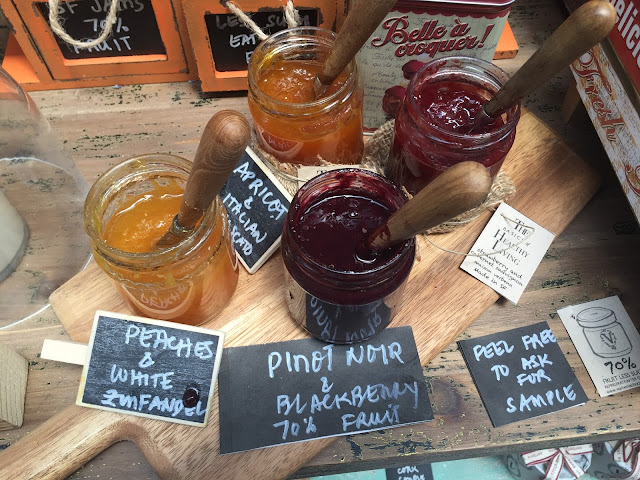 If jam is up your alley, then the perfect compliment is the cutest little biscuit stand near the front door. She had all kinds of biscuits laid out, freshly made and enticing everyone. It took a lot of will power to exit past her stand without stopping. Next time, I doubt I will be able to. 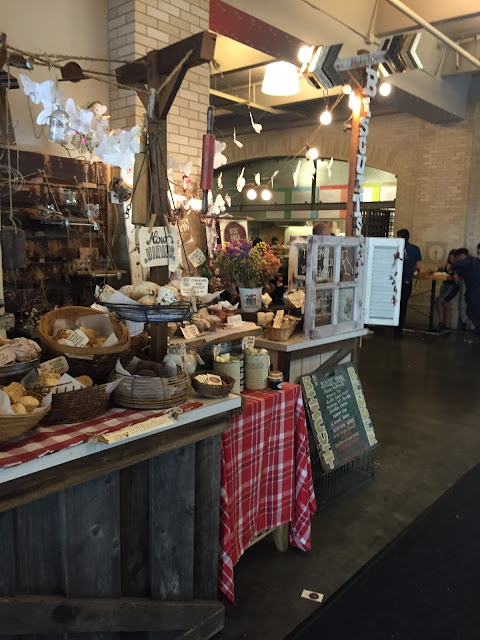 I loved the ultra fancy s'mores kit at the gourmet chocolate shop. I might just have to pick one of these up for our next camping trip. 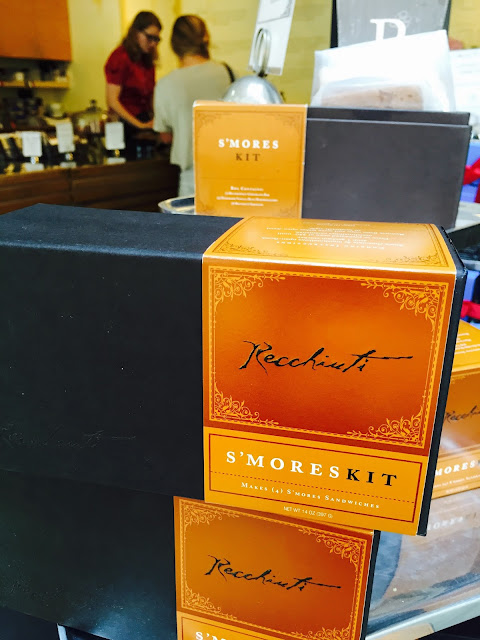 I dared not go any further into that shop though. I resisted a lot of temptation while I was there, but not everything. When I saw people walking around eating these yummy looking donuts, I knew I was doomed. Sure enough, it wasn't long before I noticed this little table selling fresh Italian donuts and cannolis. 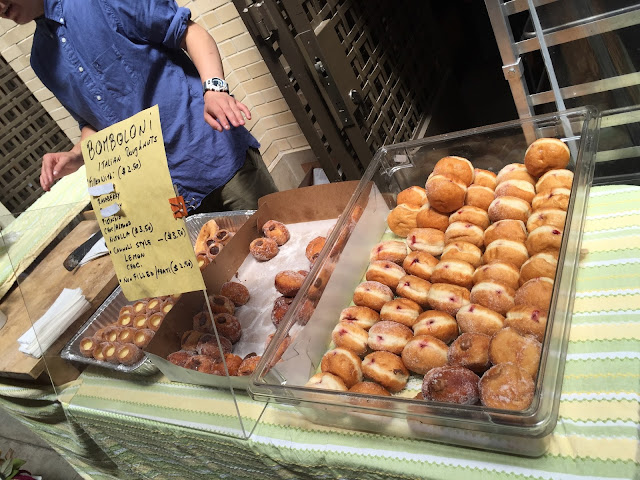 Nothing fancy, but oh my!!!! So delicious!!! I just had to try the raspberry donut. I wished someone else had been with me so I could have justified the lemon cannoli too. And they were not the only tempting deserts. From bakery shops selling pastries that made my mouth water, to homemade ice cream stores (one with a line all the way out of the building!), to specialty sweet shops selling things I had never heard of, but would love to try; The options were never ending. 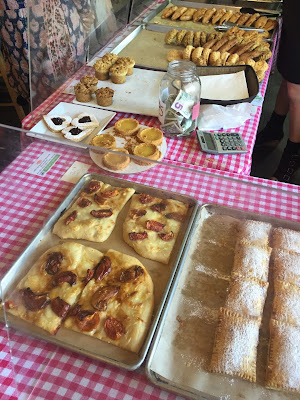 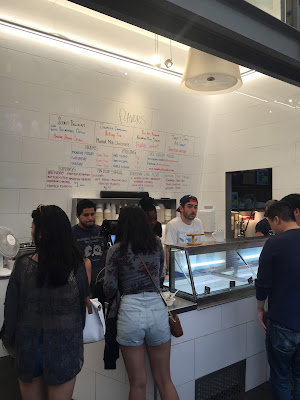 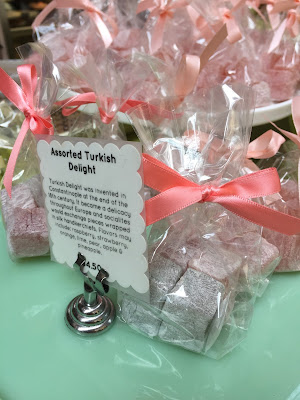 From getting too caught up in the sweets, I grabbed a burger at the American Eatery which was amazing! I toiled over which eatery to try and although I kept it simple, I think I made a good decision. I even tried their Boylan's old fashion soda made with cane sugar, but I wasn't all that impressed. It didn't taste anything like a Mexican coke which was what I was expecting. With this trip, I was able to cross this off my San Francisco Bucket list, but I think instead of doing that, I'm going to alter it to trying every eatery within the ferry building. There are so many and so much variety that I'd love to try each of them eventually. Next time I'm going to bring a friend and we can drink our lunch at the wine market. They have a bar where you can sample many of their selections and some food to that pairs well with it. I seriously contemplated doing a flight solo, but some things are just not meant to do by yourself. 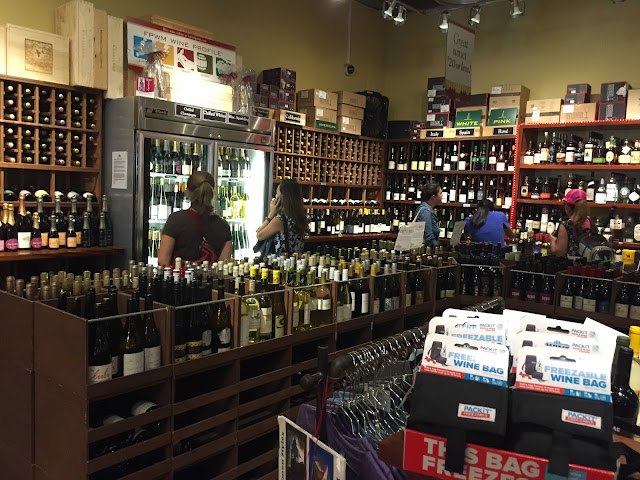 After, lunch I headed outside to see what I could find. This is the true farmer's market and only runs on Tuesday, Thursday and Saturday. Saturday is by far the biggest day with the most variety. They have everything from fruits, vegetables, herbs, flowers, eggs, honey, and on and on. Most of the places were fully organic and all were local. I'm not one of those people who only eats local, organic, free range, gluten free stuff, but I was smitten with it all none the less. 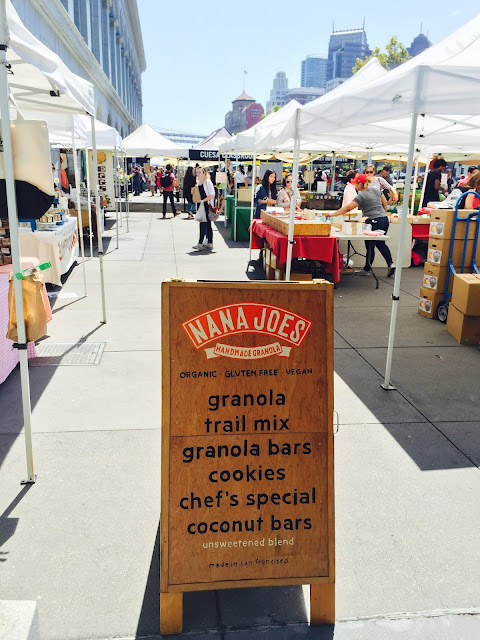 And there is no denying the fresher, the better. This was some of the freshest food I had ever tasted. Peaches were the most popular item and some were so sweet I would have sworn they coated them in sugar. There were more varieties and kinds than I ever knew existed too. Samples were not only available outside, but encouraged by most of the vendors. I think they knew if you tried it, you'd buy it. 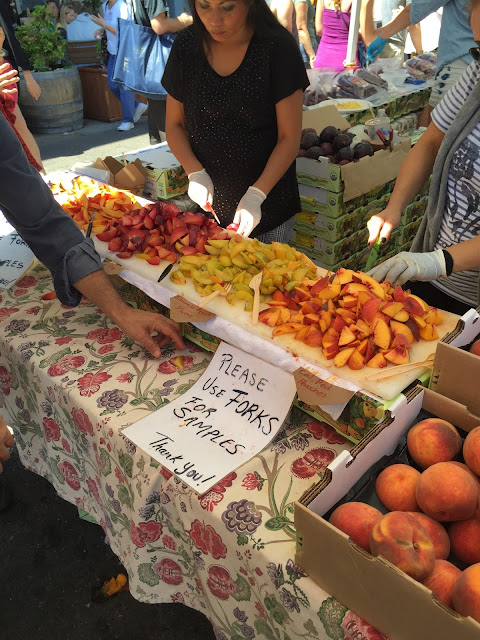 If you are visiting San Francisco on a budget, come down here on a Saturday and eat yourself a days worth of food just by sampling. I eventually had to stop, since I had already indulged. It was hard though. The fruits and veggies were so big, colorful, and nicely displayed. It was a feast for the stomach and the eyes. 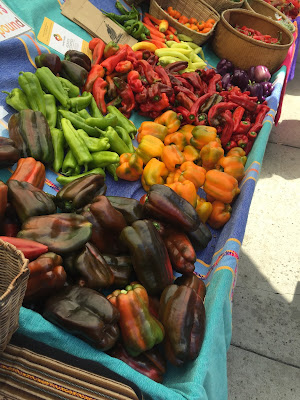 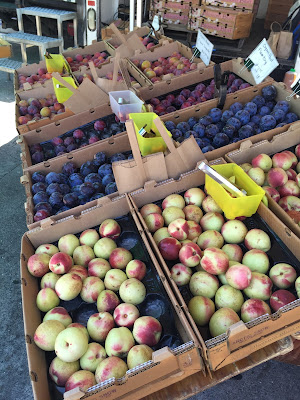 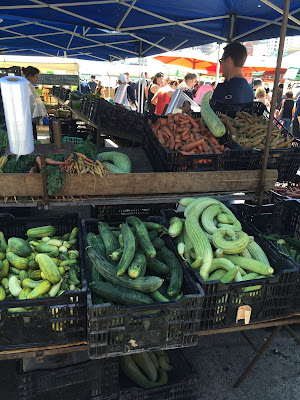 I took out $40 in cash and made myself stick to the budget. I'm glad I did too, because the presentation was so good on something that I might have bought it all if I could. All the fresh herbs were particular tempting for me. 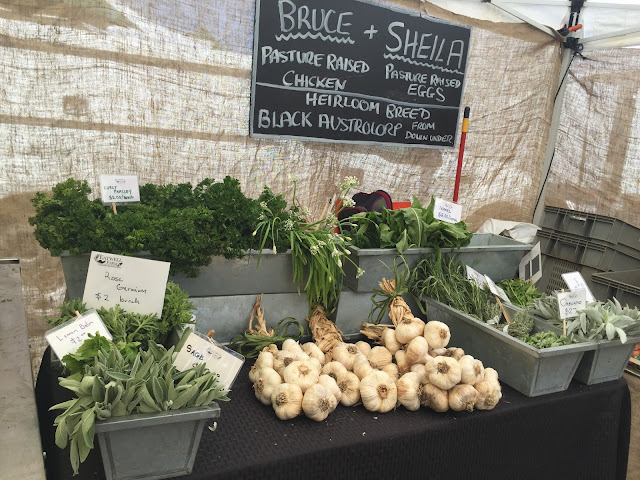 I've decided to start my family on seeded grapes too. These grapes were better than any candy you can find and I'm hoping my boys can get past a crunchy little seed so we can start keeping these in the fridge. 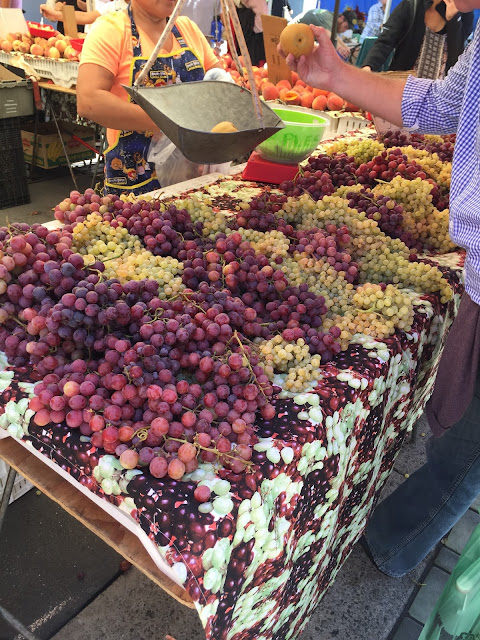 I managed to walk around and see most of the tents before they started to close up shop at 2pm. A part of me kept kicking myself for not coming here sooner and a part of me was happy I didn't know how amazing it was when we lived only a block away. There is no doubt, I will always have to come with a budget, because the amount of money I could blow here is worse than any mall. I am however already planning another trip and am excited to share it with visitors in the future. I can see us stopping here on a Saturday morning, getting lots of goodies for a picnic then heading down to the park to enjoy some yummy foods and sunshine. This is a happening place no doubt, but in this instance it is definitely for a good reason!  It's supposed to be the best farmer's market in the country and I don't see anything could be any better. I think it is also reasonable to say, there's no better place to be on a Saturday morning in San Francisco than right down here. 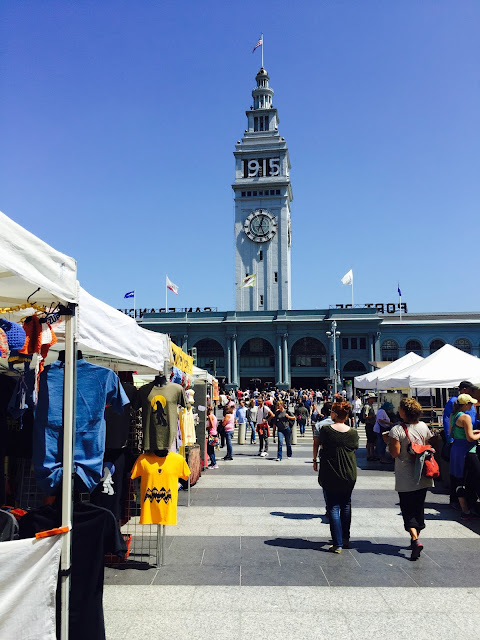