I cannot believe how quickly July flew by. It really seems impossible that it consisted of an entire 31 days. While most people see August as the end of summer, here in San Francisco, our summer (or Indian Summer) is just getting ready to begin and I love the weather that it brings with it. Summer in San Francisco means cool, foggy days. If the fog isn't greeting you first thing in the morning, you can guarantee that by the time you get off work, it will be. Everyday, I watch the fog roll in toward us. Landon says it looks like a wave coming over the mountains and he is exactly right. 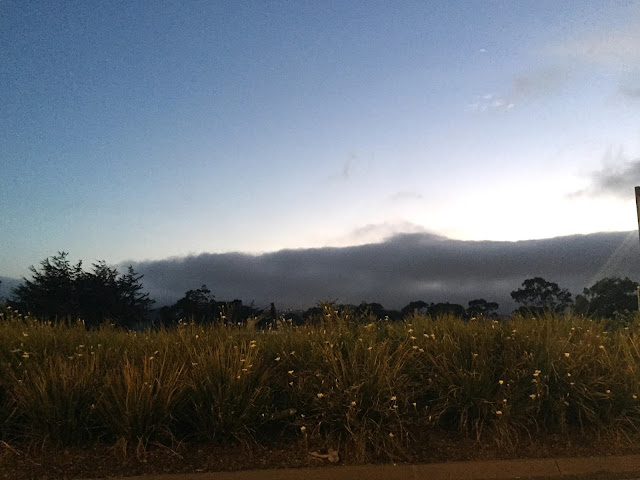 And it moves quickly! Adam and I need to get video of it one day coming over the mountains. It really is pretty neat, but I'm ready for a break. I think San Francisco might be the coldest place in the US in July.

Of course, that didn't mean that July was gloomy for us. It was quite the opposite. We ended the last day of June and the first nine days of July in Oregon having a blast. While I've already posted on a number of days, there is still so much to share. Oregon was a blast and the most fun days we had, I've yet to share. They include a fun filled day at an adventure park. 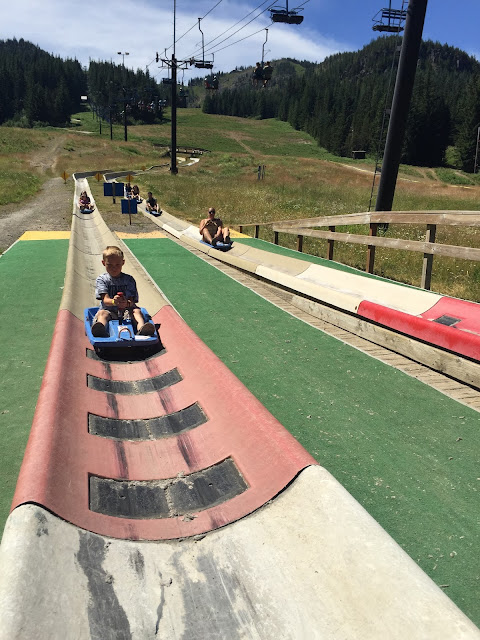 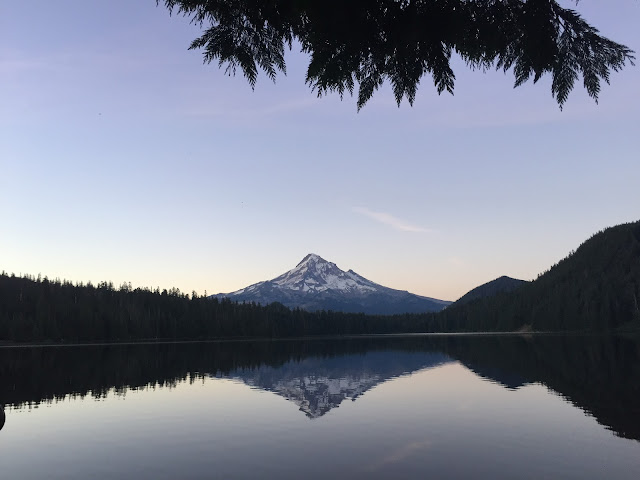 Exploring the areas of the Columbia  River 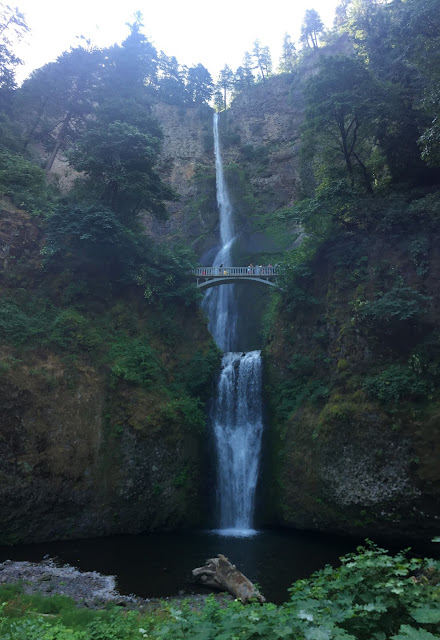 Getting the sand beneath our toes along the coast 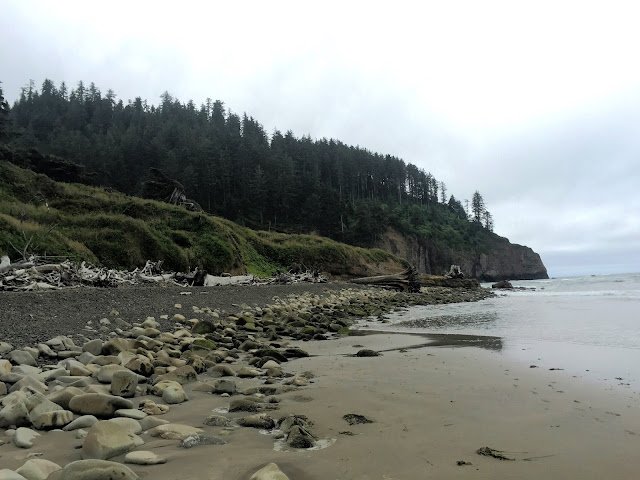 And experiencing the most amazing sunset on our final night of the trip. 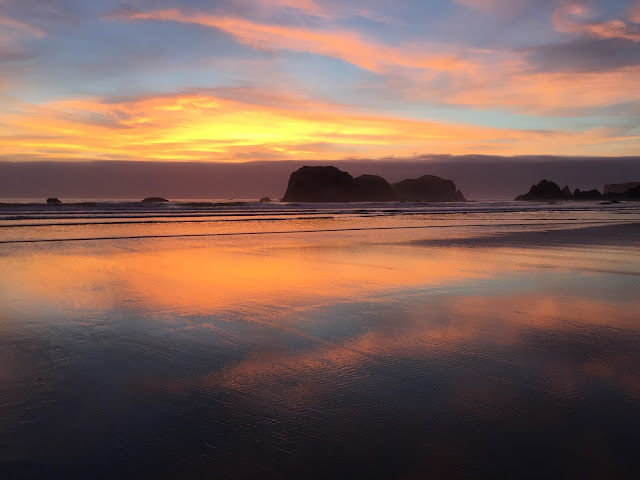 We were all sad that it had to end, but it sure was fun and memorable. I cannot wait to share it all!

When we got back home, it was immediately back to business, school and work and the rest of the usual. This included a well needed trip to In and Out. Only in San Francisco does the line for In and Out wrap outside the parking lot and around the block. Everyday. All day long... 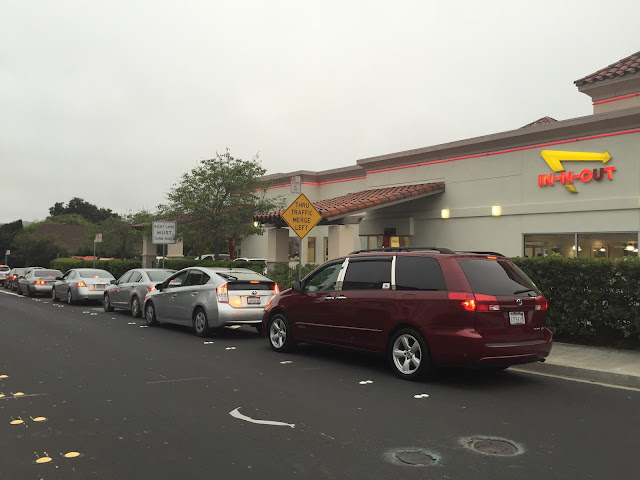 It's totally worth the 30 minute wait though. I don't even care.

We got back home on a Wednesday night and I went back to work the next morning. Thursday and Friday were the last days at my old job and then, the following Monday, I started a new one! I hadn't really been looking for a job, but when opportunity knocks, we've learned to answer and since I'm actually going back to a former employer, all I really felt was excitement rather than nervousness.

On top of starting a new job, it was also time for another big change. My dear car officially had to be decommissioned on July 1st. After 11 years and over 200,000 miles of faithful service, the money it would need to get my Jetta to pass California emissions testing just wasn't worth the cost. My registration expired on June 30th and despite months of conversations discussing our options and trying to decide what to get, it wasn't until the last minute that we knew what would it be. We went with what we love; Das auto! 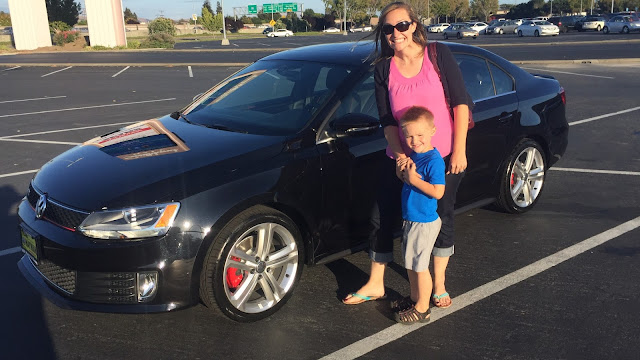 We looked at so many types of cars and as much as I really wanted a convertible (see fog above), I am so happy to have another Jetta. The best part is that it has the one thing my last one was lacking, a little more power! I couldn't be happier. We are a German-car loving family. Even Landon knows Mommy and Daddy both have Volkswagen. 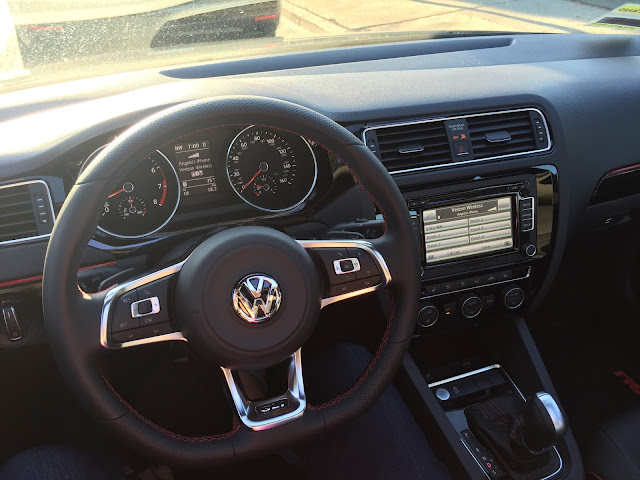 We spent 6.5 hours at the dealership the Saturday we bought it test driving multiple cars, talking about our options, negotiating...and Landon was a saint the ENTIRE time! As torturous as car shopping is for adults, it has to be 10 times worse for kids. So we told him we'd get him a treat that night and spend the next day doing whatever fun stuff he wanted. On the way home, we stopped off for his treat. 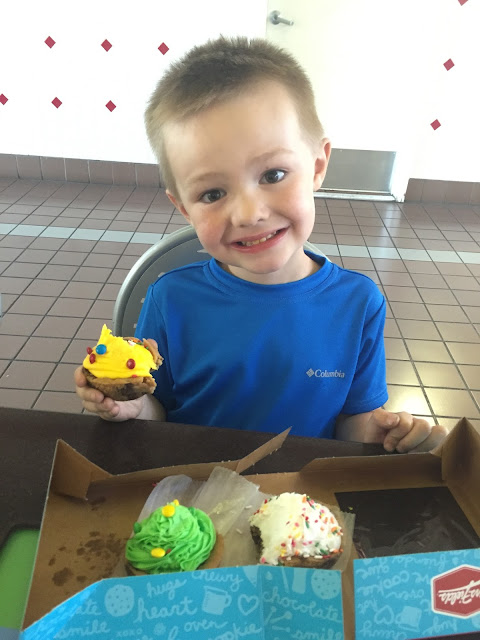 No, he didn't get all of those. More like one and some change. Later that night, we couldn't help but take the new car for a night out around the town. San Francisco is fun to drive at night so we did a few San Francisco things we had never done before like drive down Lombard Street, drive through China town, and drive up the steepest street we could find. It was a ton of fun for everyone but Landon who slept the entire night in the backseat. 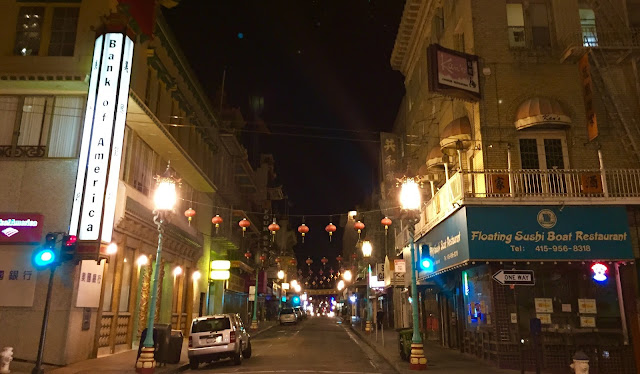 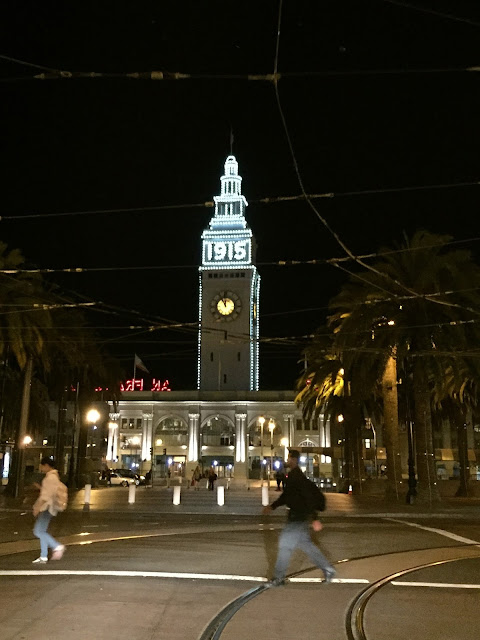 The next morning, we let Landon pick the activities for the day. This is something that never happens for this kid and he was in heaven making the decisions for once. He started off the morning leisurely wanting to play lego's for a few hours before going out. 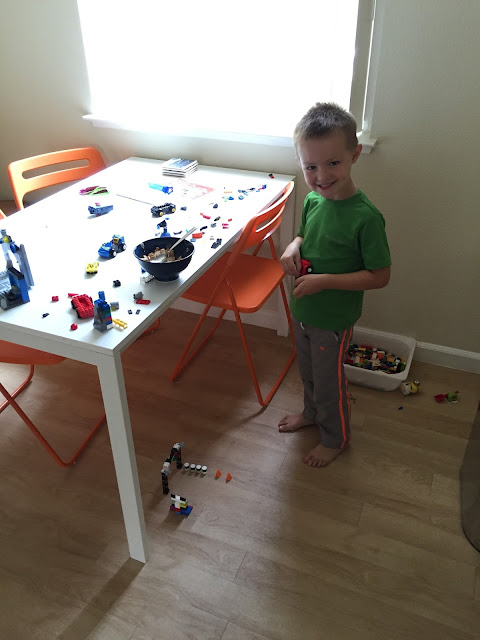 Eventually, he decided he was ready to go do something and he wanted to see a movie, so we went to see Minions in 3D. And he got treats! 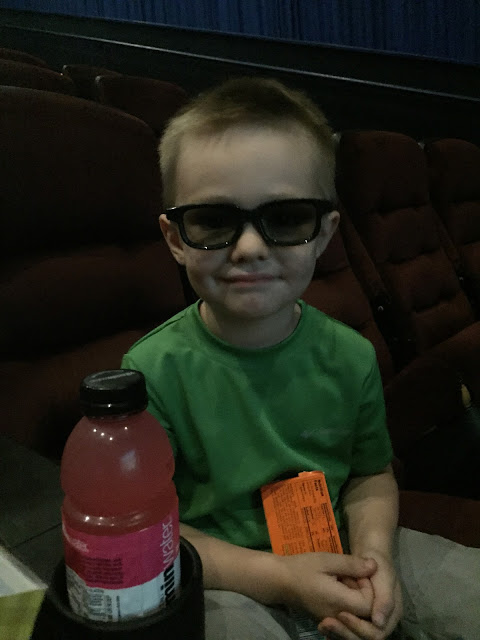 Despite our yummy snacking there, after the movie we headed to his everyone's favorite place for lunch. Panera Bread! 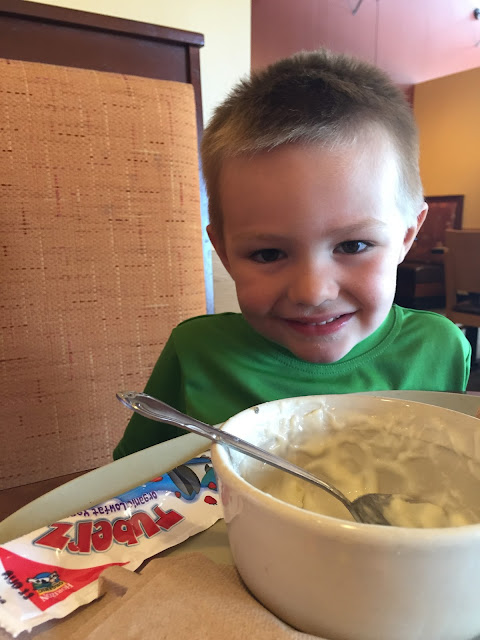 He made a good call as they do have the world's best mac and cheese. Afterwards, we headed to the chaos that is Ikea in San Francisco to try and buy a table for him that we could make into a lego table like THIS one. There is no way to explain the craziness that 7 million people in a small geographical area brings, especially to a store like Ikea. 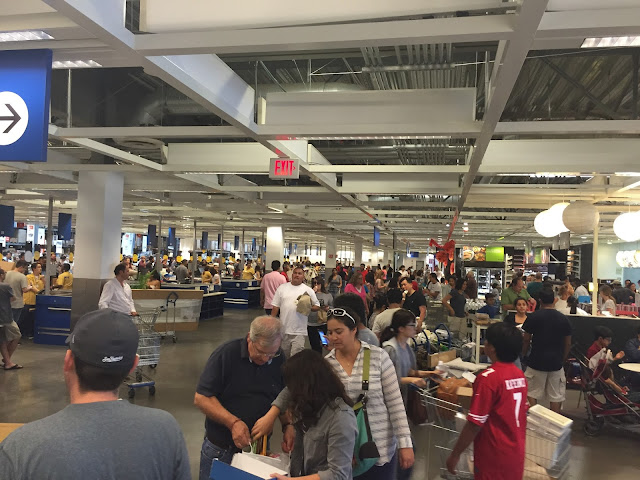 We fought the madness, then headed to target to get some base plates only to find that the two targets near our house were out of stock. So, we decided we would order it online instead and he was happy enough to play lego's and color on his new table. Overall, he had a awesome day which he fully earned and deserved. 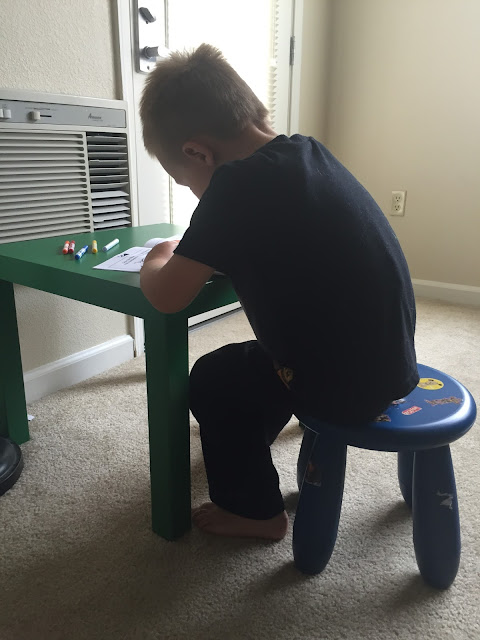 Hopefully, we will get the pieces soon and finish the lego table. We have definitely entered the lego stage of boyhood now.

On top of having a day all for himself, Landon also spent the night at a friend's house for the first time. I'm really not sure who enjoyed it more (him or us!) since Adam and I got to go out on a date night for the first time in OVER 10 MONTHS!!!!!! We went to see Beach Blanket Babylon which is a San Francisco staple and the longest running musical show in history. It just so happens the show is located in North Beach, my favorite area of town, so we headed down, grabbed a quick bite to eat, went to the show, then got some dessert before heading home.

It was so nice having a date night and we were able to check an adult-only item off our San Francisco bucket list. It's a bucket list we are making good progress on too! You can check it out HERE. Of course, the real question is, how did Landon do at his first sleep over. I think the picture I received that night says it all. 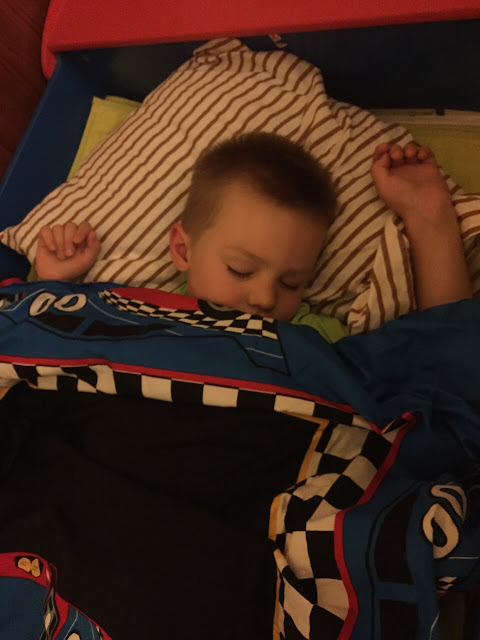 Naturally, a week later we had to return the favor and the same friend came for their first sleep over at our place. He was a little unsure of our pony, Kaiser, but overall the boys had a ton of fun. Maybe even too much fun, they were up the next morning around 6 am talking in their room and giggling. I asked if they slept and they told me that "sleeping means playing, so yeah they slept." That's probably about right. Little stinkers! 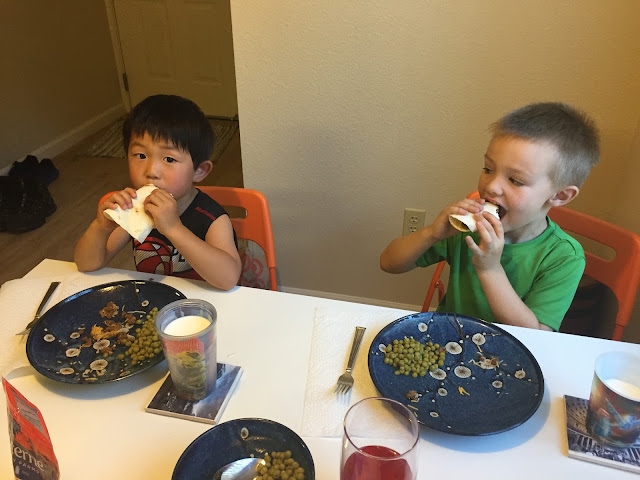 Landon and his friends also tried out a summer soccer clinic to see if they might be interested in playing soccer on a team in the Fall. Landon was a little shy at first, but quickly got into it. 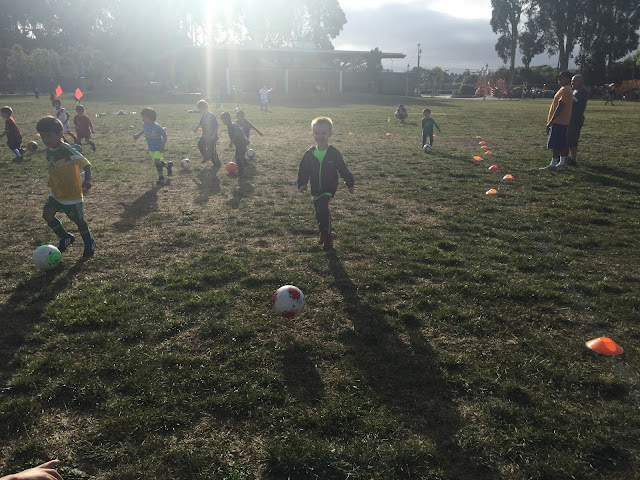 Some of the other kids obviously have a had a lot of practice from the their crazed soccer loving Dad's. Landon did fine kicking the ball, but when it came time to practice playing with teams, he wasn't aggressive like some of the other kids. The South San Francisco team might be a little too authentic for Landon this year, but I am going to start him on some team soon as he really enjoys it. 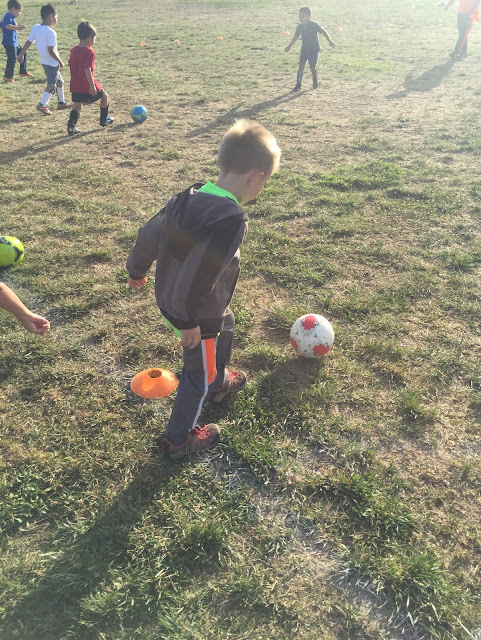 And in the final days of July, while we said goodbye to the month, we also said goodbye to my beloved car. It made the long trek back to Kentucky but this time it was on the back of a truck. Since it was unusable in California, we let Adam's sister have it. I wonder how long it will go... It really was the best car and I hope she can enjoy it for years to come. 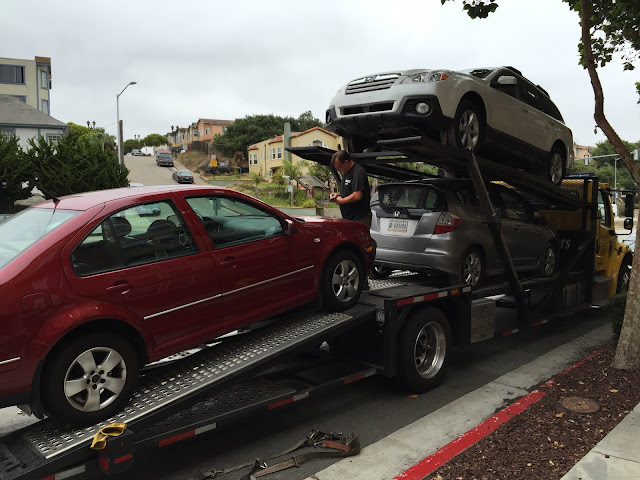 Well that about sums up July. It was busy, but not too busy. We did a lot of relaxing and accomplished some big things. August is wide open on our calendar. Since I switched jobs, I had to cancel a little weekend trip, so I am excited to spend more time doing fun weekend activities and discovering more fun places. No matter what it brings, it's always an adventure!