After our early morning sunrise at Mt. Hood, we headed down from the mountains and off to the coast.  A good portion of our morning was spent like this. 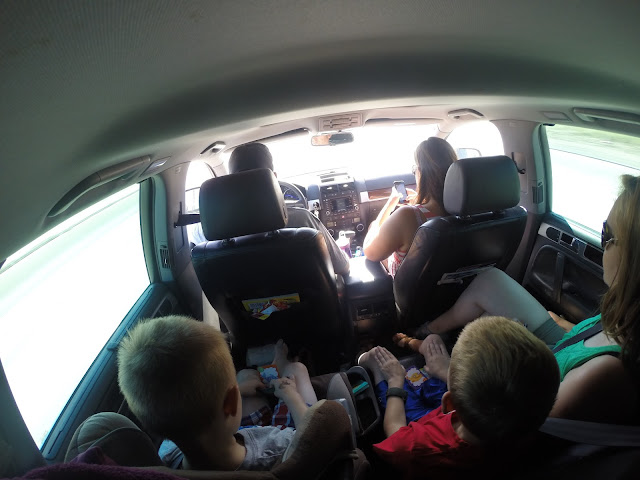 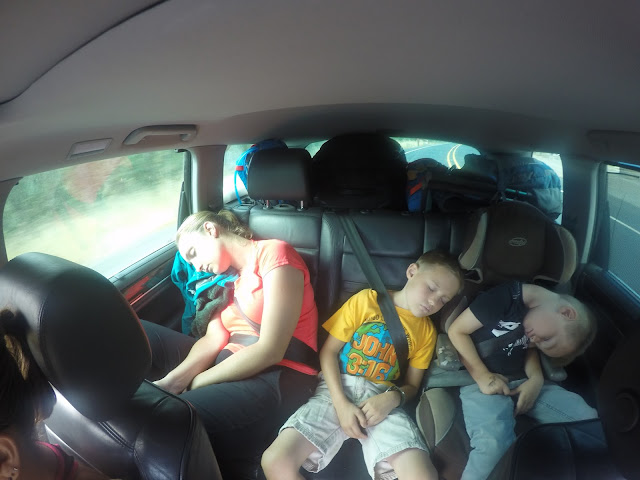 But we don't need to name names. Actually, this was one of our few long car days and the boys did really well. On the way through Portland, we stopped at a Walgreens and picked up some dollar Teenage Mutant Ninja Turtle coloring books. Best $2 we ever spent. They entertained the boys in the car the rest of the trip. Not to mention all the awesome artwork they produced. 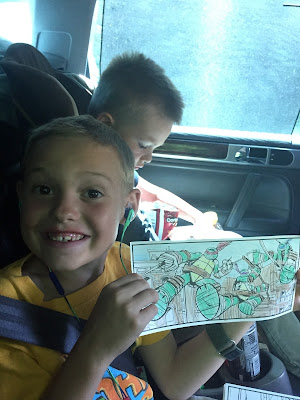 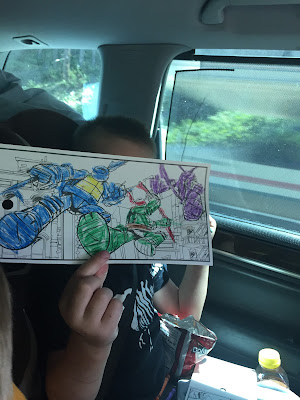 A few masterpieces later and we reached the ocean. We were just outside of Tillamook at Cape Meares and although it was overcast, I couldn't wait to see the Oregon coast. There's no doubt we picked an amazing place to stop and see it for the first time. 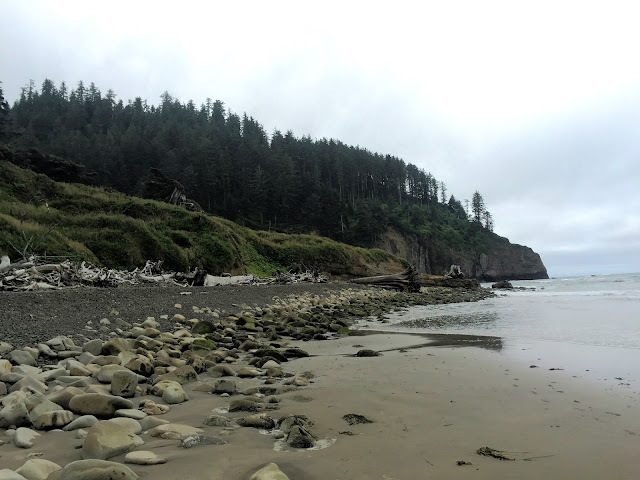 We may live on the coast (or 5 minutes from it) and only a few hours away from Oregon, but there is a drastic difference between the coast of California and the Pacific Northwest. Both are beautiful and it's hard to compare gorgeous to stunning, but the massive trees that stand right on the edge of the cliffs is a new and spectacular seascape for us. And the sheer size of the beaches there is like nothing we have at home. The coast alone was reason enough for me to fall in love with Oregon. 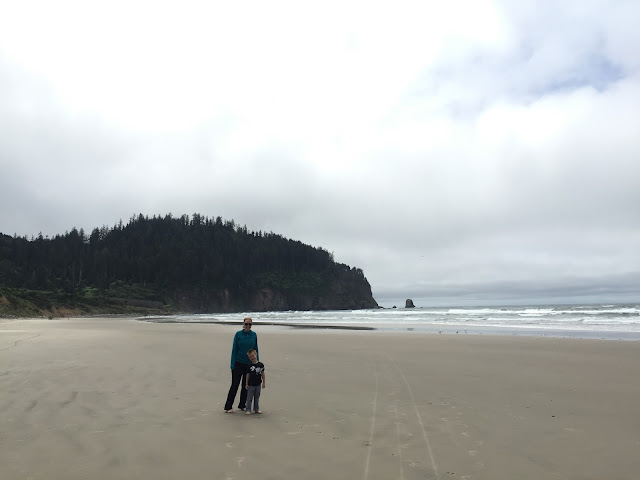 After a few hours in the car, the boys couldn't have carried less about the pretty scenery, but were thrilled to get out, run around, and play on the beach. 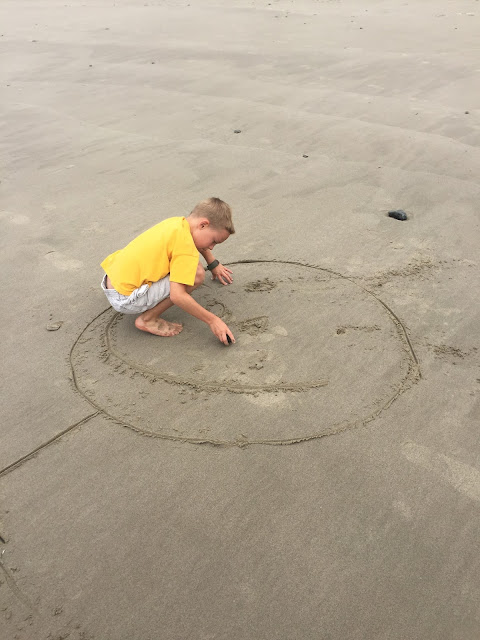 They ran into the freezing water, drew in the sand, collected sand dollars, and shells. We practically had the entire beach to ourselves and they discovered a new favorite beach activity, racing. They made it all professional in the proper starting positions (or at least they tried). 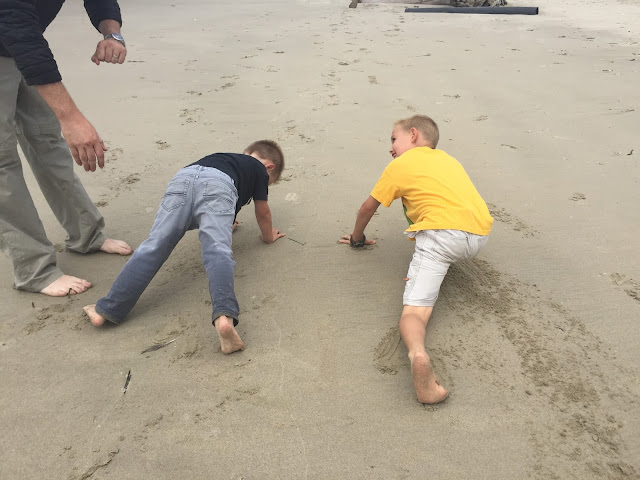 Being half his age, Landon got a bit of a head start. 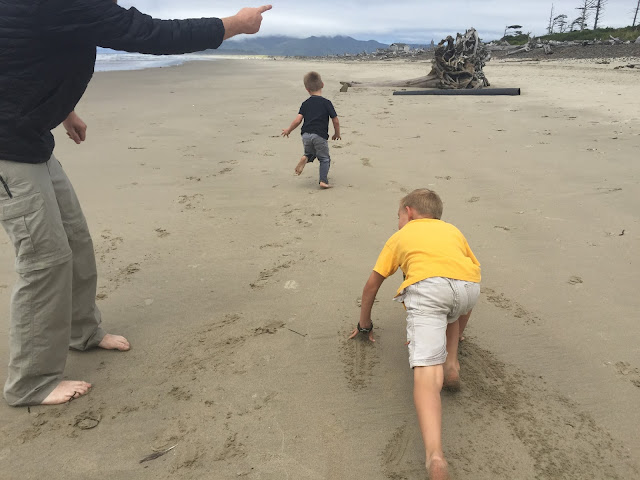 And he needed it, because Taylor caught up quickly. 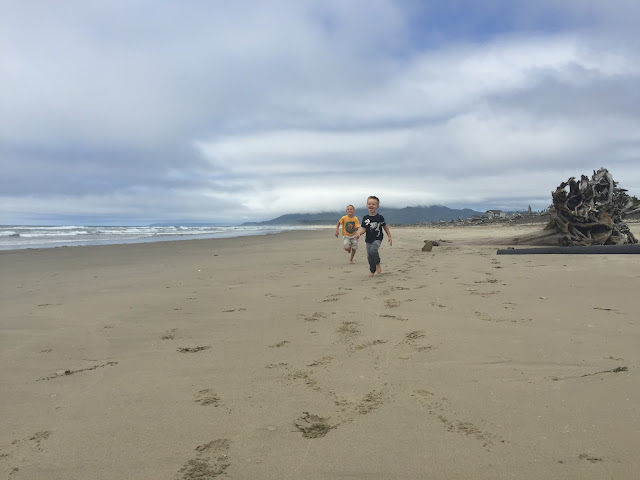 Taylor's a quick one. He totally beat me at a race. Adam often had to resort to cheating for Landon to even win. 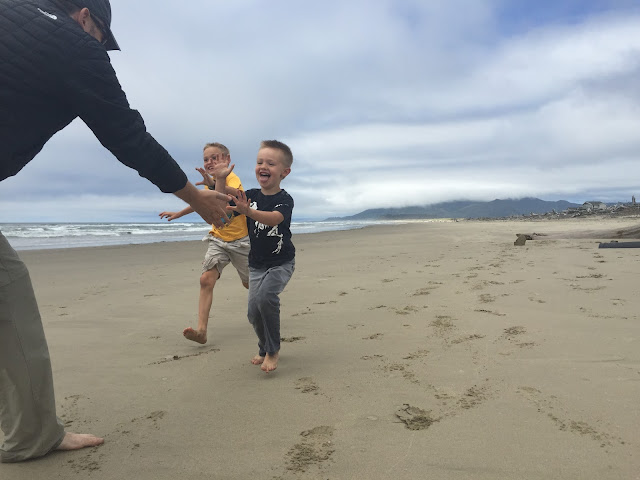 And we promoted this activity greatly, seeing as how a set of worn out kids in a car means a much more relaxed and quiet ride for everyone. You think we'd have learned our lesson by now, but against my better judgement, we didn't put on Landon's swim trunks. By the time we were ready to leave Cape Meares he was covered in sand. 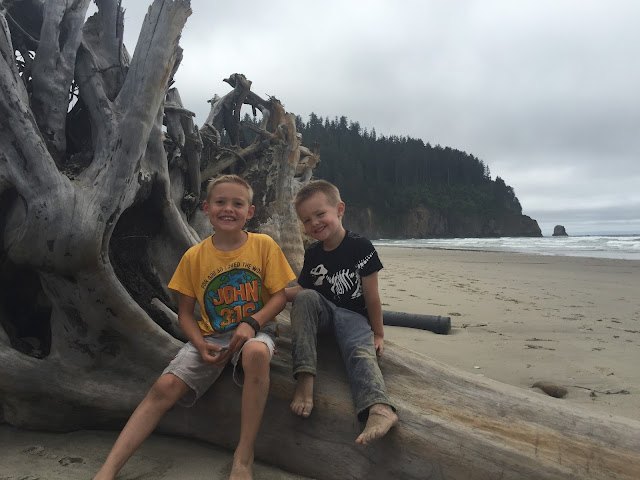 So we headed back to the car, put the swim trunks on and headed down the coast. Tillamook was a beatuiful area and I wish we had the ability to spend the day there. They are famous for their cheese. Right now, Adam and I are working on some Tillamook garlic white cheddar that we pair with Italian Herb Flatbread crackers. Soooo good! Next time we are in Tillamook, we will definitely spend more time, not just on the coast, but the inland areas as well. The whole area has these beautiful green rolling hills. I see myself coming back, enjoying some wine and cheese and these pretty views. 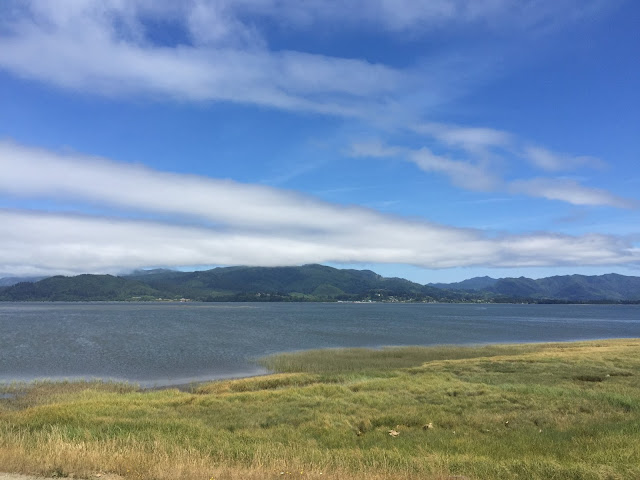 As we headed South along the coast, Adam spotted something and he couldn't believe it. While we passed a beach he noticed that on the beach weren't just people and dogs, but cars. Turns out, you can drive on many of the beaches in Oregon and he just couldn't pass up the chance to have a go at it himself. He was excited, to say the least. 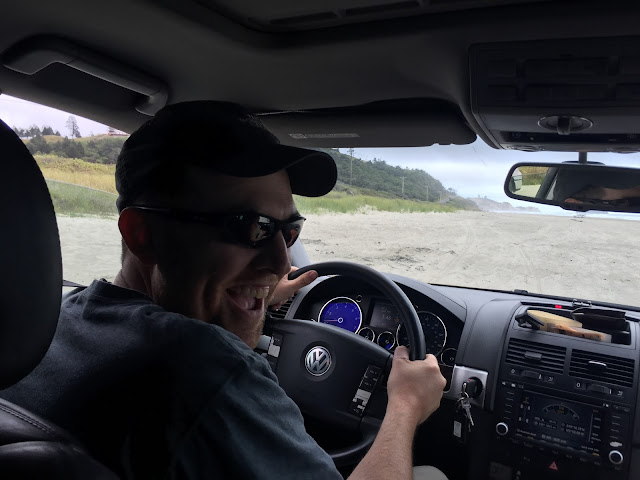 The rest of us, not so much. Given we had trouble with the car a few days before, some adults thought driving through a bunch of sand was a bad idea. Of course the grown child disagreed and was the one behind the wheel. I started taking some video and now when I watch it, I can't help but crack up. If you turn up the volume, you can barely hear the horrible noise that his tires are making trying to get traction. Needless to say, this was not the mood in the car the entire trip, but I did manage to capture this moment perfectly. Notice how I also managed to turn off the video right at the perfect second too. Memories!

Luckily, the car and all of us made it off the beach in one piece. A few miles later, we turned off at Pacific City to view the largest haystack rock on the coast. 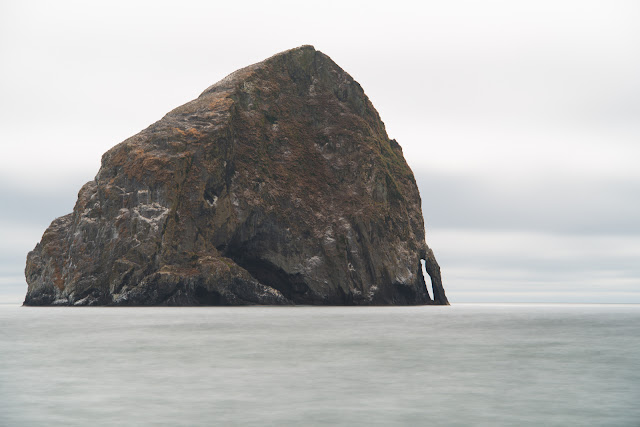 It's not where the water meets the sand that creates our love of the beach. It's where the rocks meet the water. The further North you go up the west coast, the more dramatic it gets. This area was just beautiful! 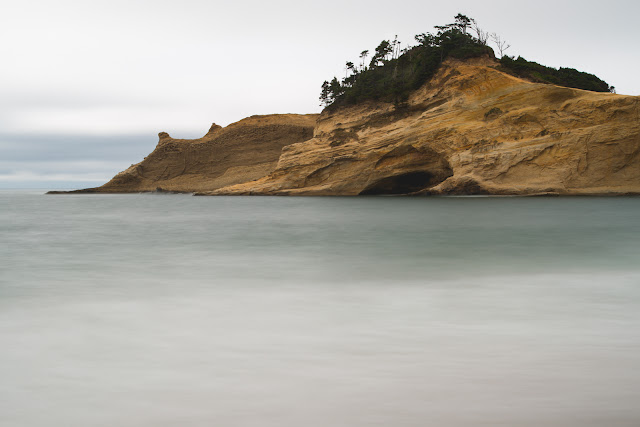 We grabbed a late lunch at the Pelican Brewing Co (a beach side seafood restaurant with good food and amazing views) and then headed to our last beach of the day, Neskowin State Beach. A funny name, but a place I would love to live. Ideally, on this massive island right smack in the middle of the beach too. 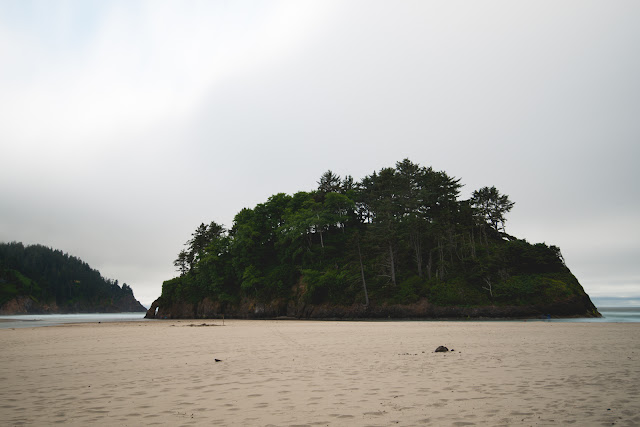 A nice water inlet just off the beach made for a fun place for kids and dogs to play. 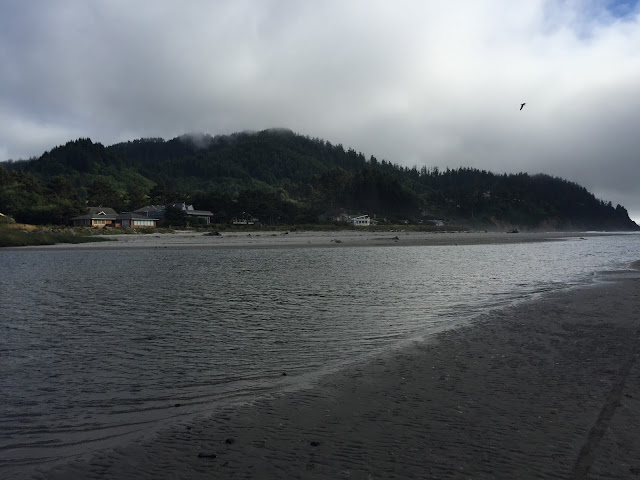 These are the best places on a beach for kids, since the water is shallow and usually warms up a little in the sun. Hands down, the best part of Oregon is that all the beaches in the state are public and free to everyone including our furry children. People say California is dog friendly, but it has nothing on Oregon. We just kept saying how much Kaiser would love it and hopefully he will get to experience it some day. Of course, Landon loved it enough for both of them. 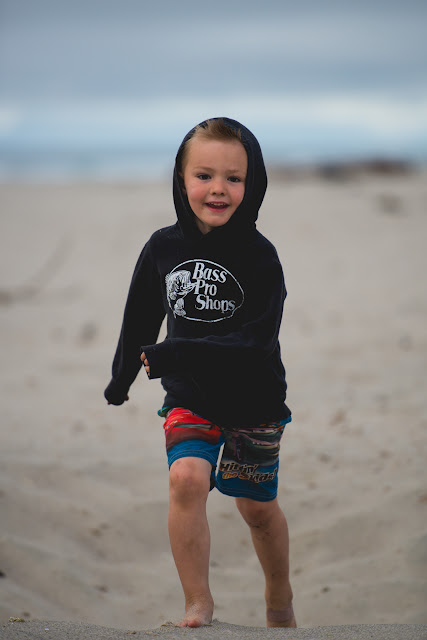 By now, we were prepared with his swim shorts on. Of course, he managed to find a fire pit to play in so he ended up covered in black soot. Thank God there was a bunch of water nearby. 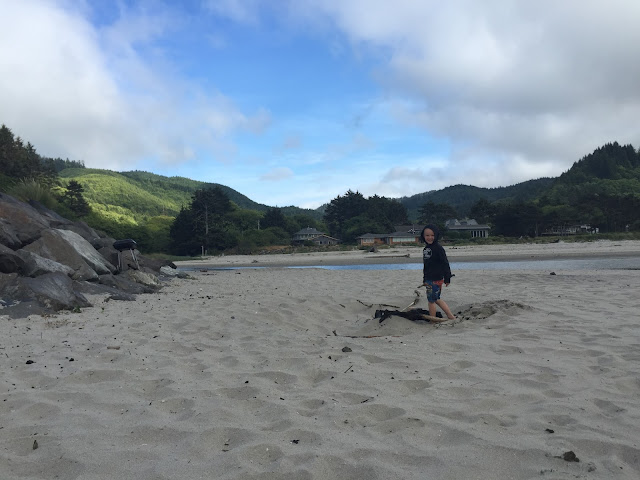 After hanging out for a bit, we headed to our campground for the night. After two amazing, secluded nights at Lost Lake, this night of camping wasn't ideal. We were looking forward to the showers at the KOA, but knew we'd be close to our neighbors. The campground was pretty empty, but as the evening wore on, a family pulled up and into the site beside us. By then, the boys were at the playground (another benefit of KOA's) and their children quickly joined them. When it was dark we had the boys return to our campsite. They brought over their new friends for s'mores and asked if they could sleep in our tent with us...

And when we said no they asked if they could sleep just outside our tent in their sleeping bags...

There's not much we could say to that, but lucky for us, they didn't end up sleeping outside our tent. We understood why they wanted to sleep in our tent when we woke up the next morning to the Mom screaming at them and complaining about where their father was. Poor kids. We did have a little room to spare as we had an 8 person tent. 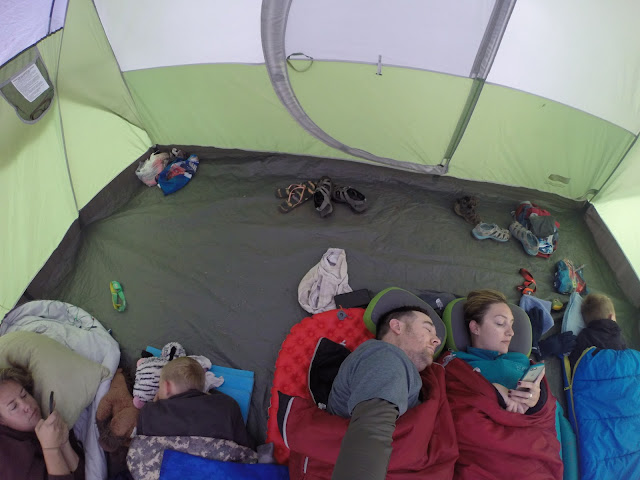 Had we known their situation the night before, we might have been a little more sympathetic and less weirded out. It wasn't a good way to wake up either, but by this point in the trip we were all pretty tired and probably would have slept in a little later than we wanted. There was no time for sleeping this day though, because it was our last full day and night of the trip and we had so much to do and see.