I'm a little sad that this the last post about our wonderful trip to Oregon, but I'm so excited to share this AMAZING day!

After, being woken up by the crazy family next to us, we packed it up and high tailed it out of the KOA. We arrived to our first stop of the day, Yaquina Head Lighthouse just in time for low tide. 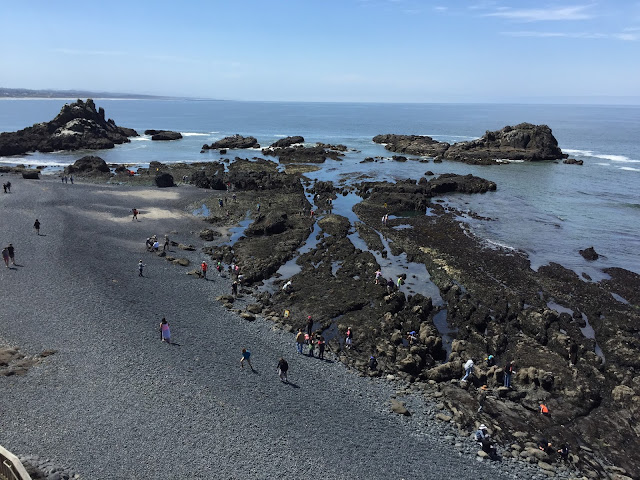 Tide pools are something we really enjoy and I had heard the Oregon coast had some great ones. Landon loves tide pools and I love that it is an interactive classroom of sorts. We knew this was something we wanted to share with Taylor during our trip. 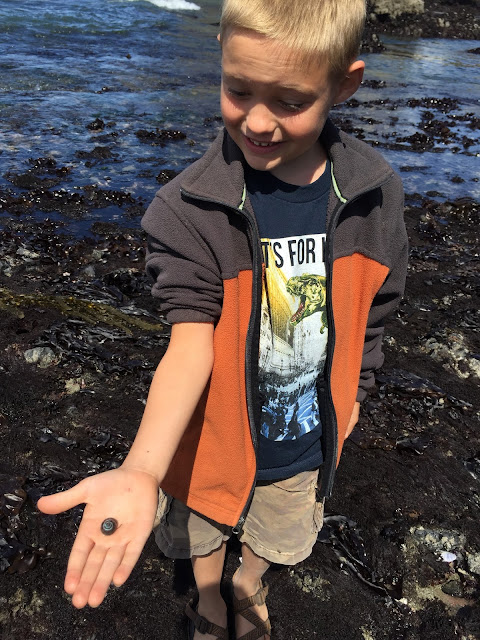 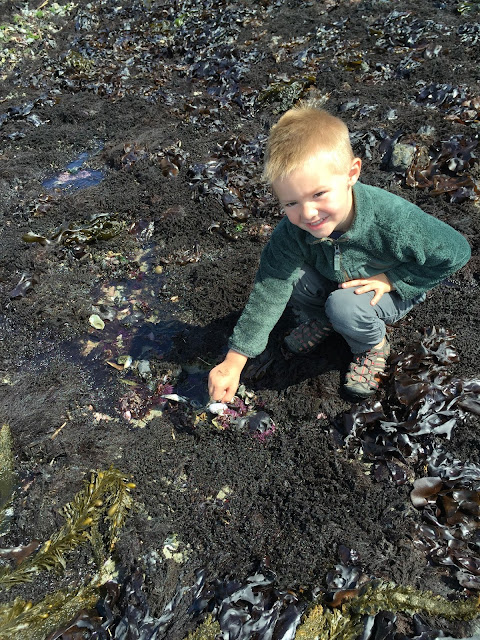 Not only can they explore areas normally only accessible by snorkeling or diving, but you can actually touch so many of the animals which kids love. These tide pools were so colorful, with lots of urchins. 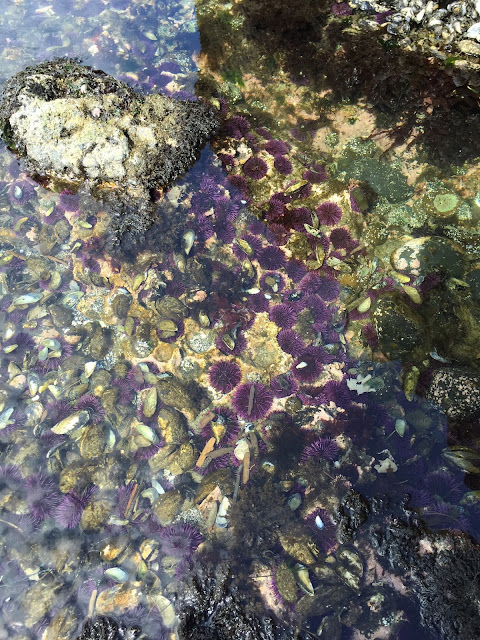 And more starfish than we've ever seen. 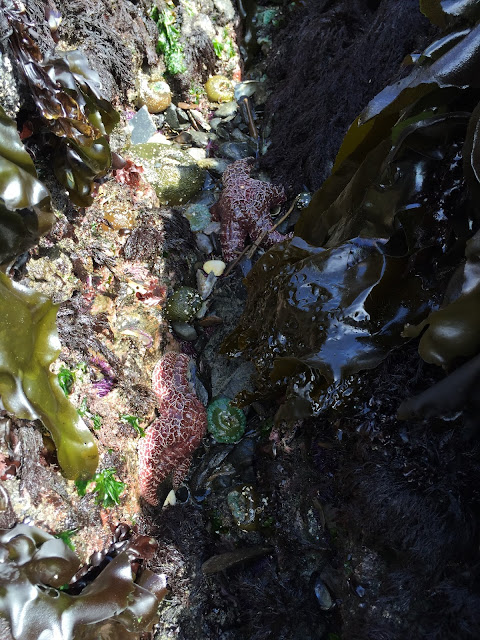 And a great view of the lighthouse up above the shore. 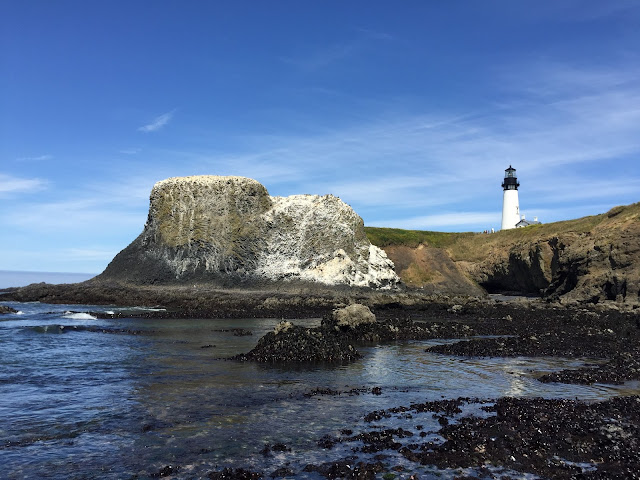 Certain areas were off limits due to seals, but it was neat for Taylor to get to see so many up close. There were also a number of cormorants nesting, but the boys were not nearly as impressed with that as we were. We couldn't have asked for a better morning to be splashing around and exploring the shallow waters. The bright sunny skies made it easier to find the animals who like to play hide and seek. Like this crab in the below picture trying to blend in with the landscape. 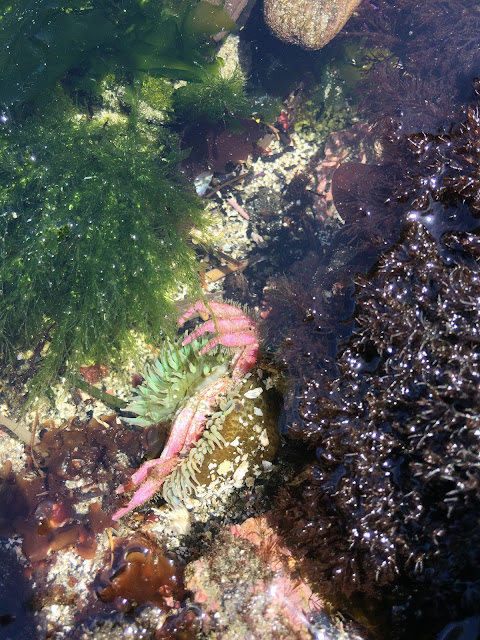 We explored the tide pools until low tide hit. Once low tide reaches it's peak the water immediately starts coming back in and it does so quickly. As the water started making its way back in, we made our way back to the beach. This beach was unlike any other, it was made entirely of black stones. Big ones too. It was just like someone dumped a huge jar of black marbles all over the beach and walking up it was quiet the feat. 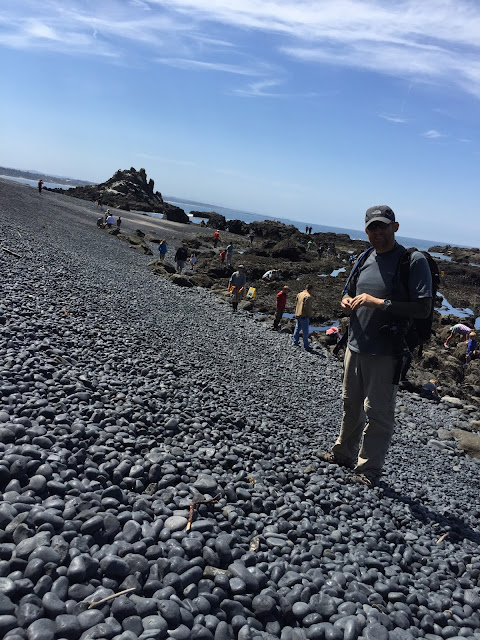 After we made our way up from the beach, we explored the lighthouse. Yaquina Head lighthouse is the tallest lighthouse in Oregon. Lighthouses never get old, they are all a little different and never fail to be part of an amazing scenery. 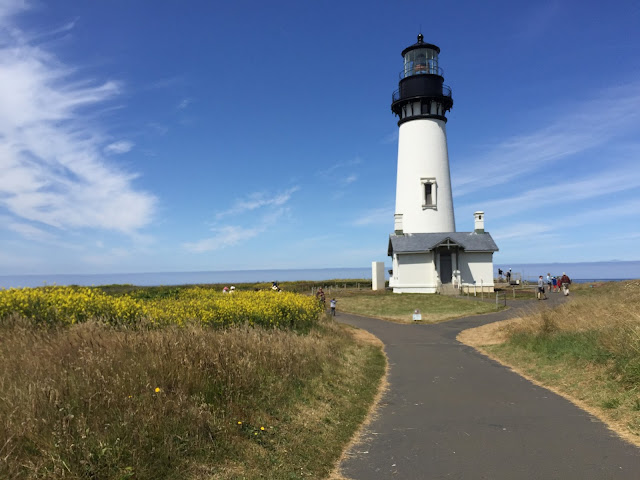 When we were finished, we headed back on the road and onto Cape Perpetua about an hour and a half South. No surprise, it was stunning too! 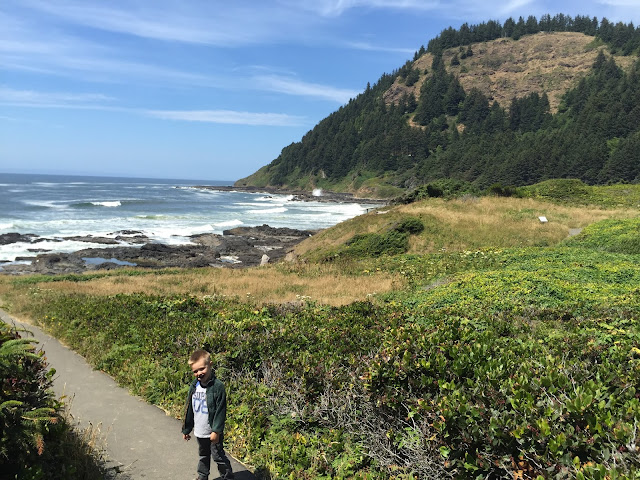 If Cape Perpetua is known for one thing, it is Thor's Well. Once you arrive, you can see a large hole in the coastal rock the waves bring water into the bottom of the well for it to be forced out with spectacular effect. It is pretty neat to see and super photogenic. 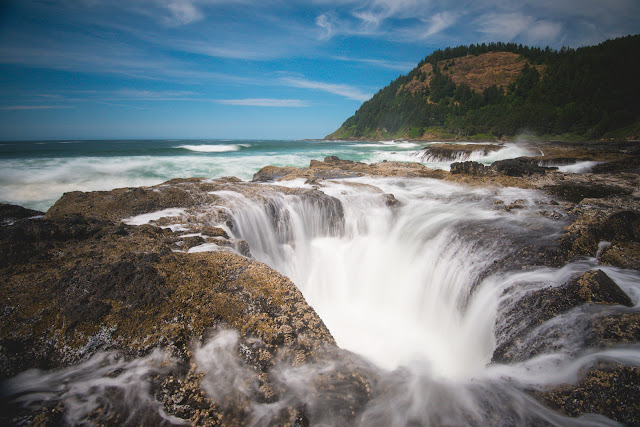 While Adam risked his life at the edge of this hole, Katherine and I took the boys to explore a few less dangerous parts of this area. As the waves crash against the rocks and into coves, large sprouts of water coming shooting up and out. We stood and watched this phenomenon for a long time, all of us memorized and excited to see it again and again. 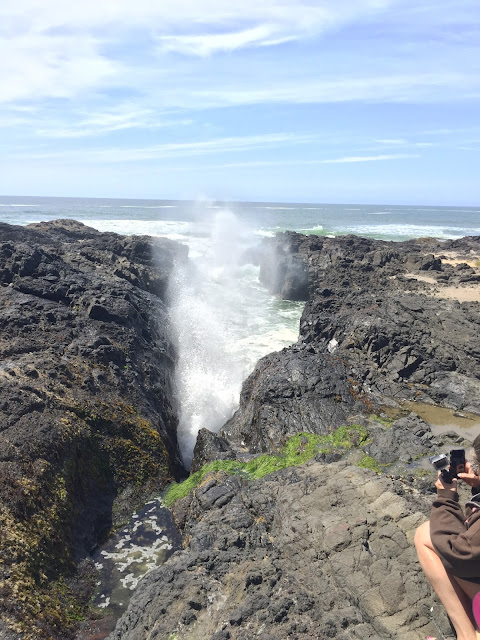 And once that novelty wore off a bit, the boys kept themselves busy exploring the little pools of water left behind from the waves. 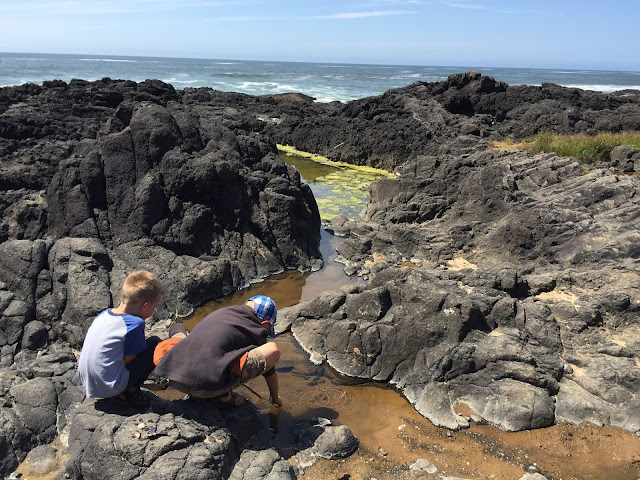 About this time we were all getting hungry so we headed to this little town which we had passed just a mile before Cape Perpetua. From the car, I had seen this roadside restaurant and something about it just screamed out good seafood. 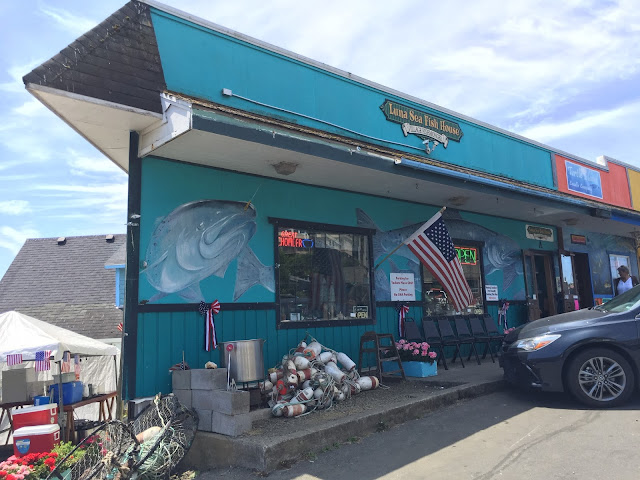 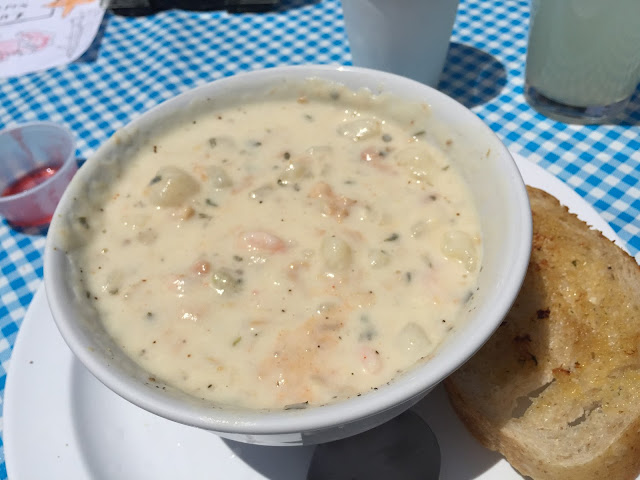 It may not look like much, but believe me when I say I would get back in the car right now and head all the way back there just for another bowl. And it wasn't just my food that was amazing, but everyone's dishes were. The amazingness of our lunch also extended to the candy store at the other end of the shopping complex where we all treated ourselves to our most beloved deserts. Katherine got huckleberry ice cream, I got homemade fudge, and the boys ate pure sugar in the form of rock candy and jelly beans. 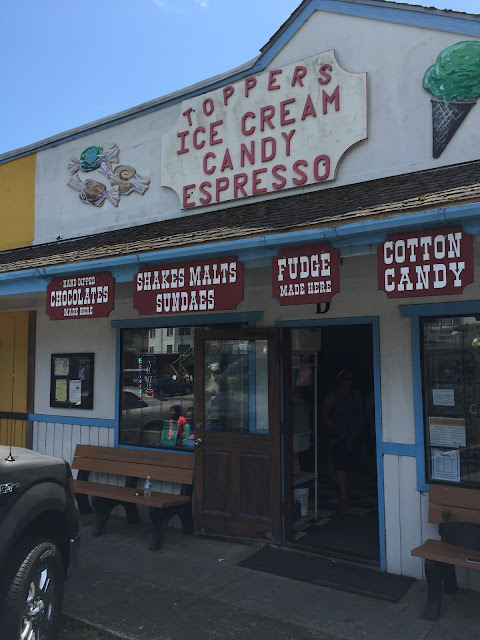 This was, hands down, the best meal of our trip, and we happened across it so haphazardly. Stuffed, we got back into the car and headed to our campsite. For some, these long car rides were starting to wear thin. 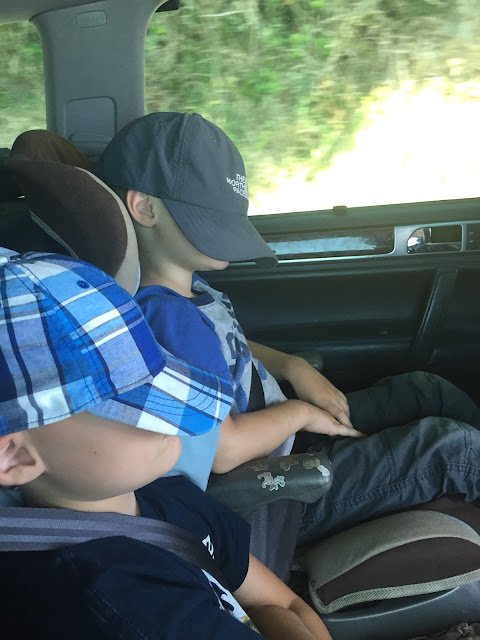 Yes, they really slept that way. We drove a few hours down the coast enjoying stunning scenery the entire time. 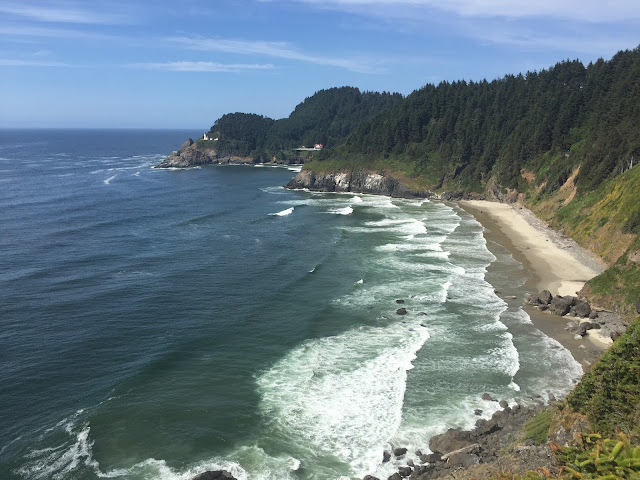 We arrived to our campsite at Bullard Beach state park in the late afternoon and setup our tent. Bullard Beach campground, was really nice and if we had more time there it would have been fun to explore the surrounding area a little more. Park rangers rode around on bicycles announcing the upcoming events and activites and it seemed like a scene from the 1960's. It was obviously a great, family campground and park. We hung at our site for a bit, made some dinner, then headed to nearby Bandon beach to play for a bit and hopefully catch a good beach sunset. As we pulled up to the parking area and over to a set of stairs, this massive beach came into view sprawling out below us with the largest rock formations I had ever seen. 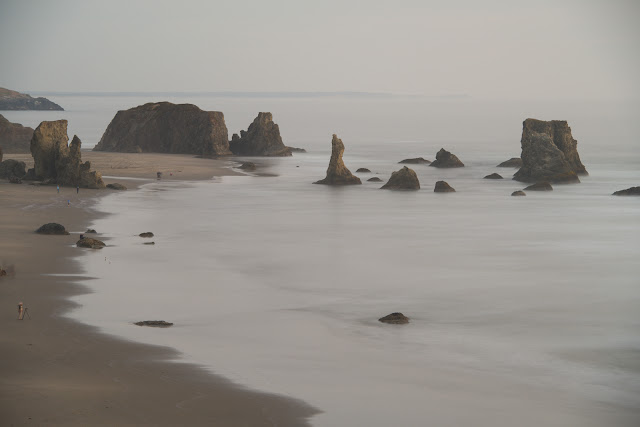 It wasn't the shape of the rocks that impressed me. It was the shear size. We played around on the beach for a while. The boys raced around and Adam snapped some pictures. 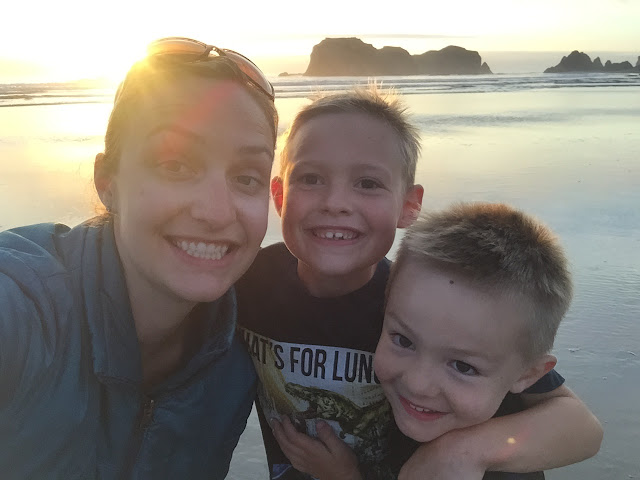 As the sun started to set, we all stopped and stared out in amazement. 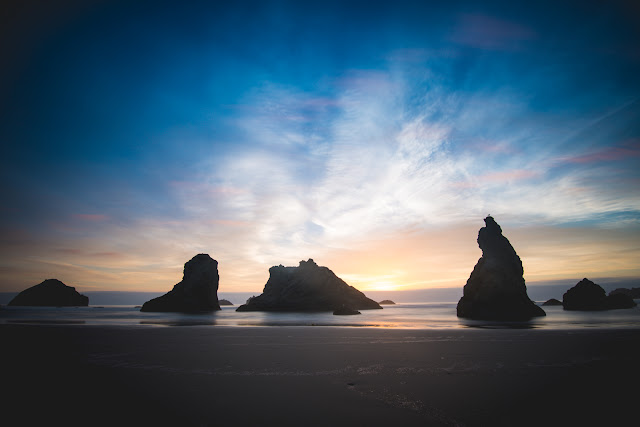 But before it reached the horizon, it sank into some clouds that were hanging just above the water. I was sure that was it some sunsets just arnt all that great. The boys were running in and out of the water, not too disappointed, and as they played, the real magic started to happen. At first the blue sky started to become more orange. 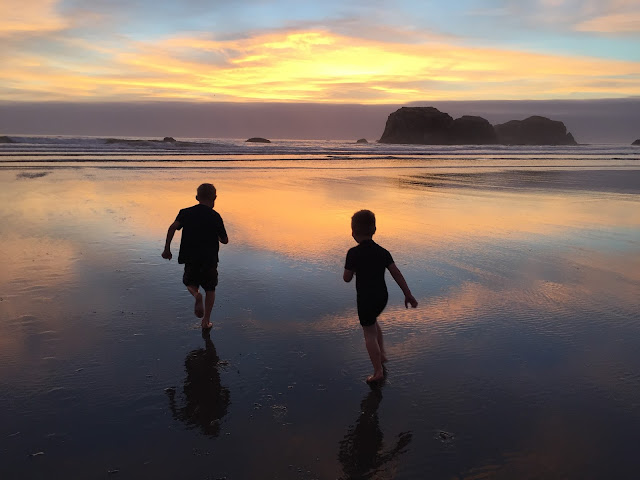 And then it was mostly orange. At this point, the sand became a perfect reflection of the sky picking up every color and hue exactly as appeared in the mirror image above it. 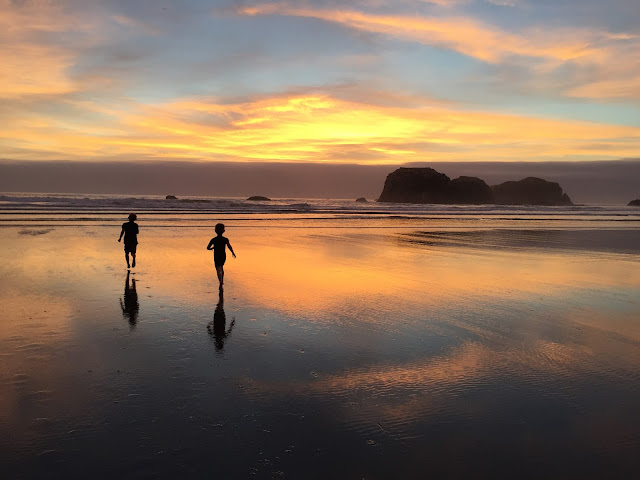 Then a little bit of pink started to appear.

And within a few minutes the orange was completely gone and purple and blue cotton candy sky lit up our eyes. 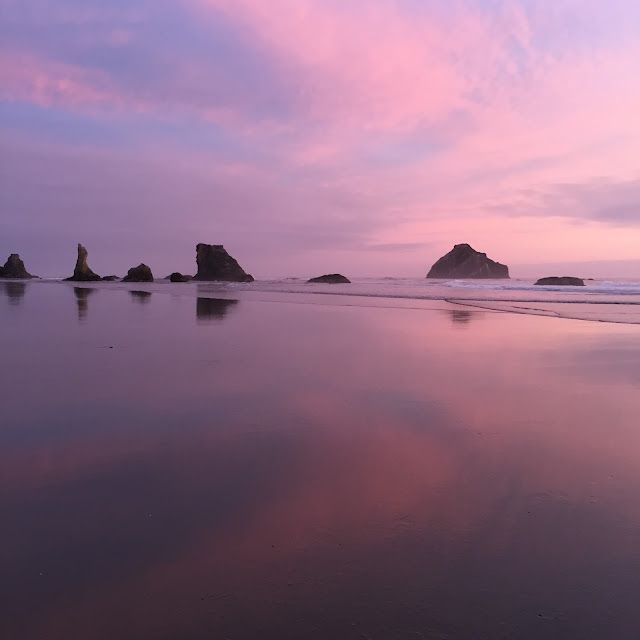 And then, as if it wasn't enough already, much to our surprise, the sun made a little more light and some yellow came back into play as the colors became darker and more rich versions by the minute. 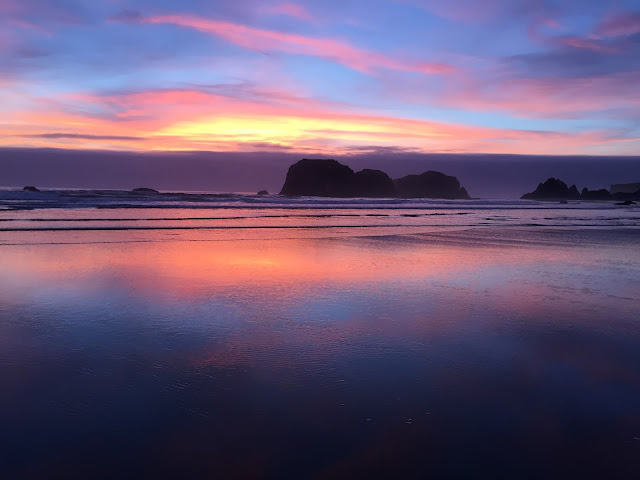 It was so long, so beautiful, so peaceful and even more amazing than I ever could have imagined or even dreamed. We all watched in amazement and every time we thought it couldn't get more spectacular, it just kept proving us wrong over and over again. I've spent a lot of time watching sunsets in the year we've been our here, but nothing has ever come close to comparing to this one. 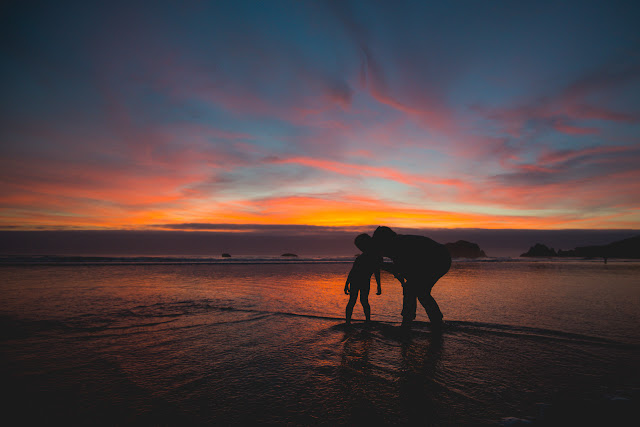 I'm not sure it ever will. It was unexpected, magical, and such an amazing end to this wonderful journey. When not an ounce of light was left in the sky we headed back to our campsite and Adam made everyone some hot chocolate to warm up. 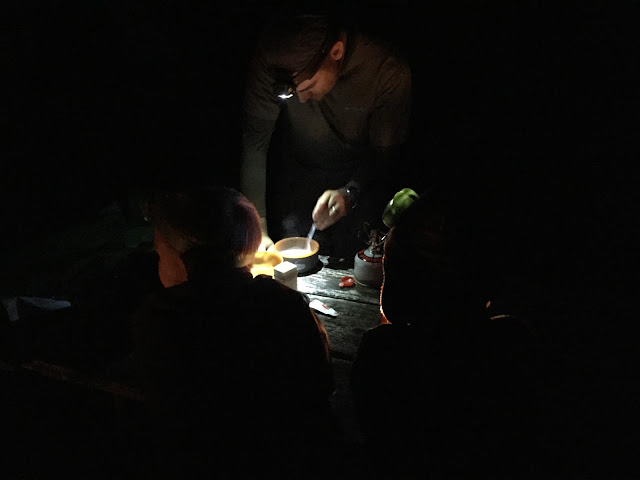 We had our last batch of s'mores and campfire and stayed up late savoring every last second of our last seconds together. 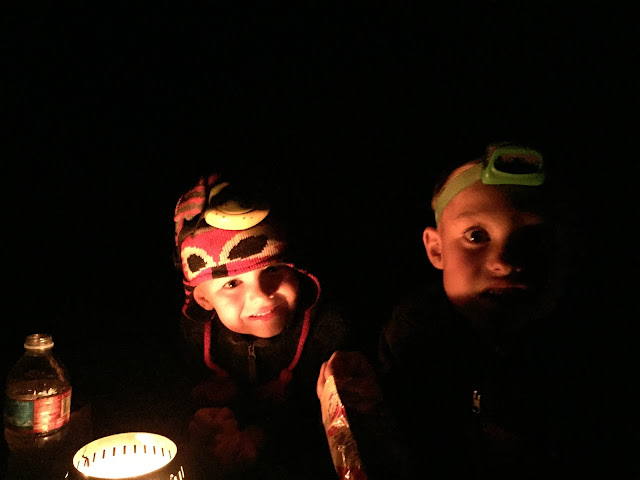 Eventually, we all called it a night and just like that the trip was over. We woke up the next morning, happy to have a had such a wonderful time, but a little sad to know the only place we were heading that day was home. Along the way, we drove through the redwoods and enjoyed more amazing coastal views, but the fact was, the trip was over and the mood was a tad bit different that day.

As Taylor had so justly put it the night before on the beach, "I'm going to remember this for a long, long time." That is the case for all of us and as we drove home we couldn't help but already feel nostalgic. I really hope Landon, at 4.5 years old, will have memories of bits and pieces of this trip for the rest of his life. I hope as we go through life we continue to have more amazing trips like this one. Although none of them will ever be quite like it, there is no doubt that Oregon stole our hearts. We will be back to enjoy it many more times. To make new memories, enjoy new places, and relive a few of our favorites. 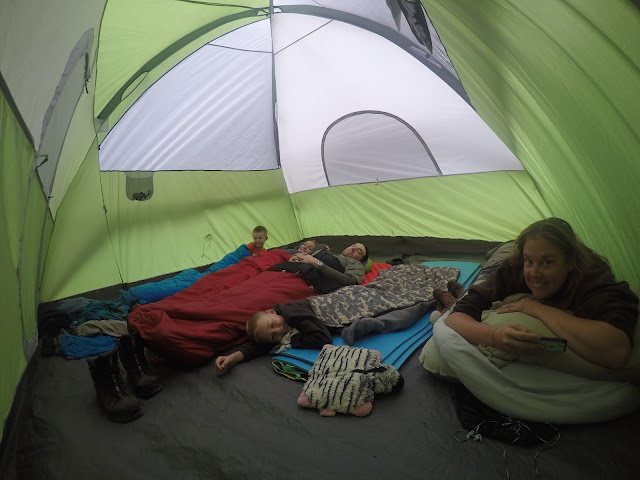