Grape Stomping and a Visit to Napa

This weekend, we made a much anticipated trip up to Napa Valley for some traditional wine making, the old world style. A number of wineries in the area have grape stomping this time of year, but it was easy for us to decide which one to go to; Grigch Hills. I wrote about my visit with my Dad (HERE) back in March and how much I fell in love with this Croatian winery. Did I mention there wine is really good too? Like really, really good! Great wine always helps, but the story and the heritage (at least for me) really make it special.

This was Landon's first trip here and although I wouldn't normally recommend taking a kid to a winery, the grape stomping is for people of all ages. I thought it might be a good way to teach him a little bit about wine, the process, and show him a little Croatian history. First things first, we had to get our feet dirty. 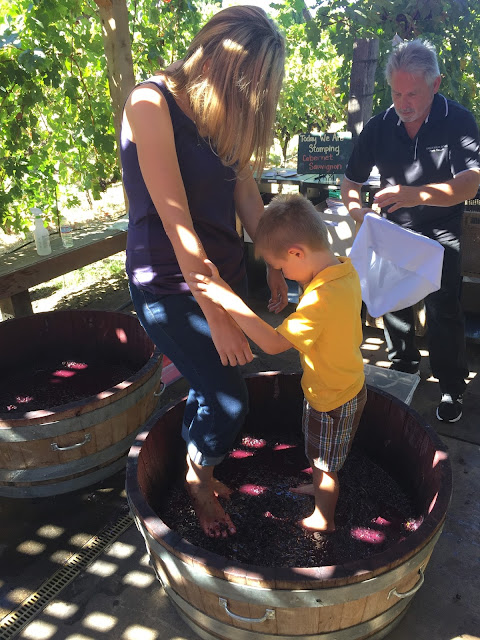 He didn't necessarily love the squishy grapes in between his toes. Much of it was pretty well mushed when we got in. Had it been mostly large grapes that squished under us, he might have gotten more into it. Still, he played along for a bit. 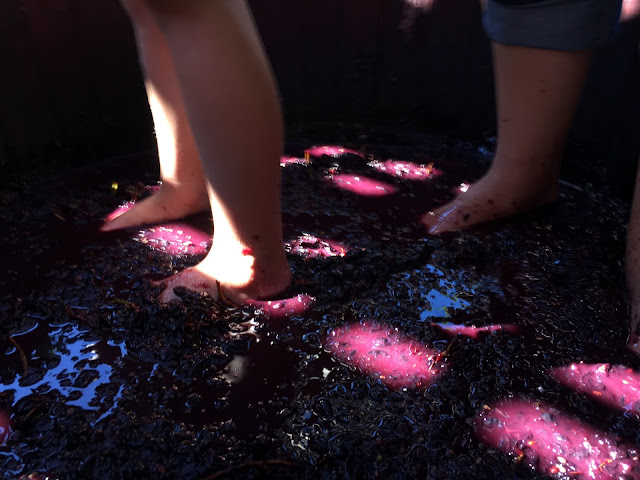 It was still fun, we stomped around for a bit getting it all in between our toes and making sure it was ready for wine. Who's thirsty? I tried to explain about how the man that started this winery came from the same place our family came from, but I don't think much of it sank in. I figure if 5% of the things I tell him go through, then it's an accomplishment. 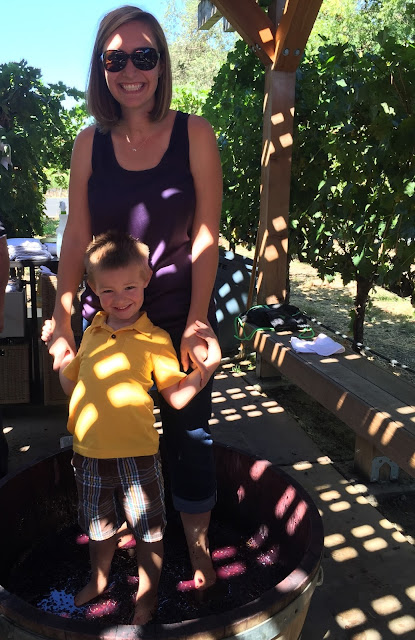 Adam bowed out last minute on the stomping, but it was ok because he snapped these pictures of us while we did it. We also got to make t-shirts with our wine soaked footprints on them to take home. 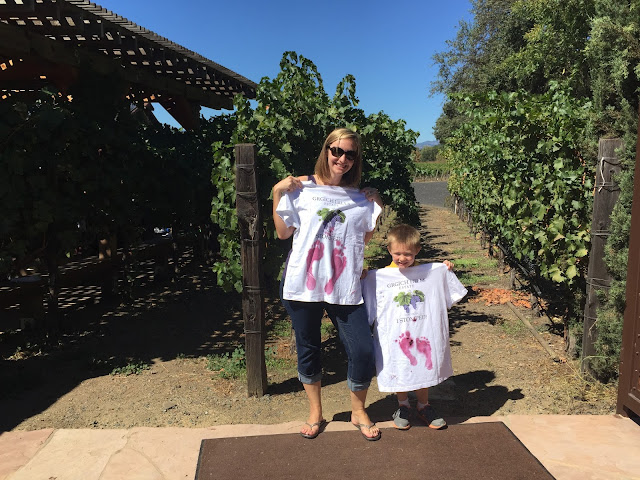 When we were done, I went inside for a wine tasting while the boys stayed outside and enjoyed the grounds. 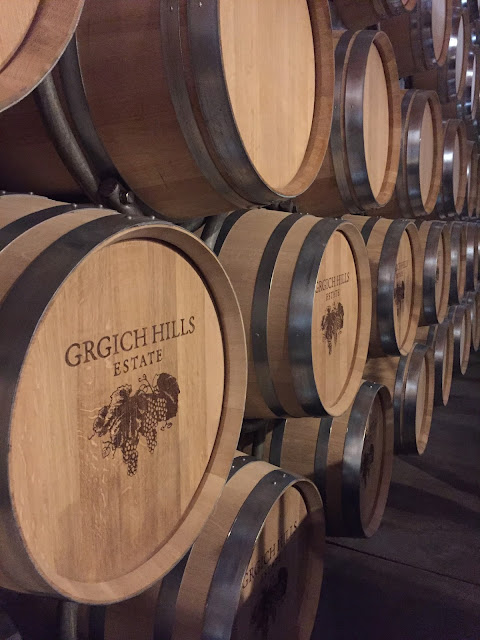 After I was finished, I met the guys back outside and we watched the winery in action processing their current harvest. 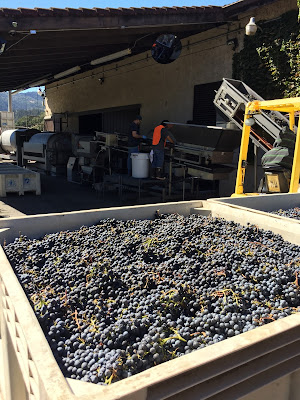 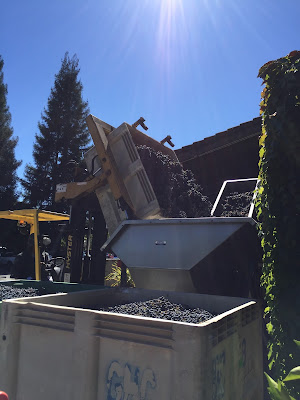 I tried to explain the process to Landon, but all he really wanted to was eat the grapes. These little ones are so much sweeter than what we normally get at the grocery. He kept calling them blueberries despite correcting him 100 times or more. Luckily, there was no shortage of grapes. 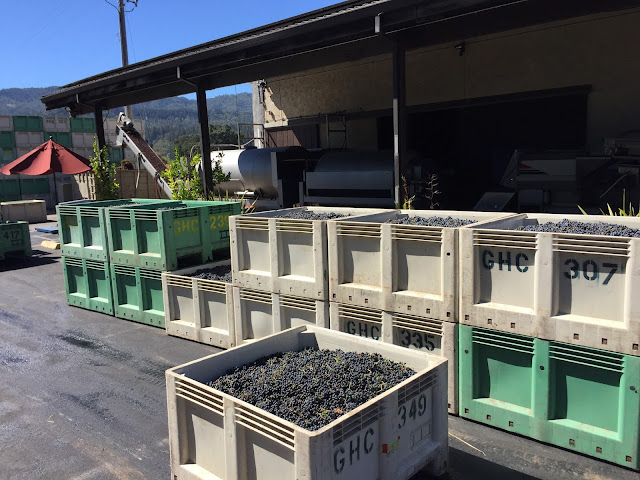 Grigch Hills doesn't have the most stunning vineyard as it spreads across 5 separate properties, but they do have a nice size vineyard in the rear. I took Landon back there to show him the grapes growing and to try and explain how the process starts. Surprisingly enough, there were still plenty of grapes on the vine. 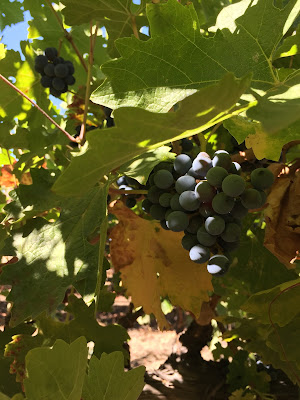 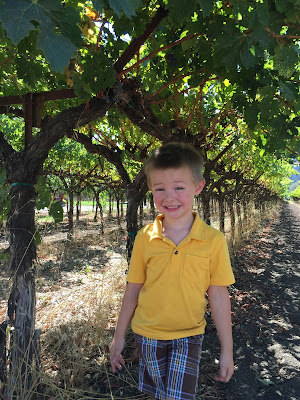 Once again, his main concern was trying and picking some grapes to eat. We decided it was time to get some lunch so we headed back into Napa to a place I've been wanting to try called the Oxbow Market. It is a smaller version of the ferry building in San Francisco, with shops, eateries and fresh produce markets. As much as I've fallen for the Ferry Building, I knew I would enjoy Oxbow. As we headed up into the building, I saw one of my former customers; A restaurant called Ca' Momi. 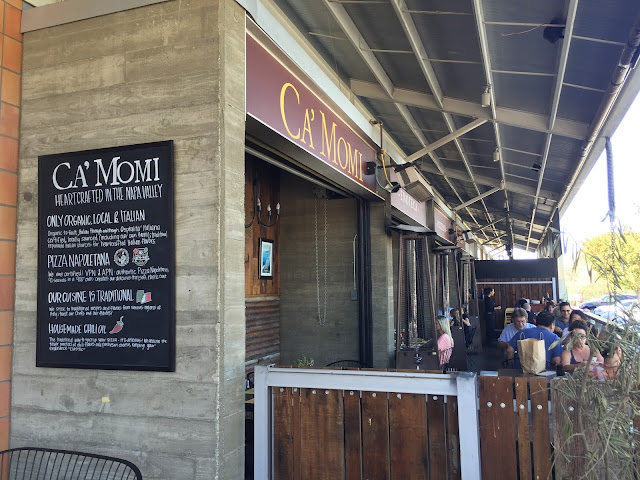 Just a few months ago, I had imported some Italian sodas for them and it was through working with this company that I had first heard about the Oxbow Market. I had completely forgotten that they were here, but once we saw them I knew this was our spot for lunch. As much as I love North Beach, I think Ca' Momi is the most authentic Italian food outside of Italy. The food was amazing, but we have no pictures to prove it. We were too busy enjoying it to stop and take a photo.

I did however manage to take a picture of my goods on the menu. It was seriously a cool moment for me. Getting to actually see, purchase, and taste products that I helped bring in from another country. I've seen products at a customer warehouse and for awhile I worked on Nikon so I probably inadvertently saw my goods multiple times, but this was different. We ordered two Italian sodas on the advice of the waiter. Adam's Elderflower was even better than my Limonata, but both were refreshing and delicious. I was just left wondering why I'm only discovering these drinks now after all the time I've spent in Italy. 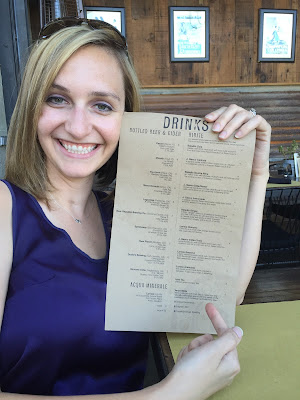 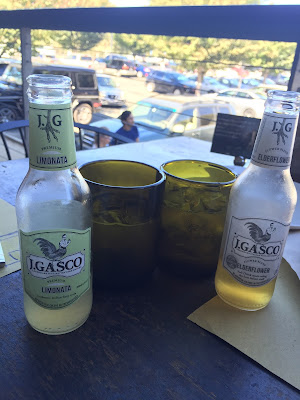 And my only regret about lunch was not ordering dessert. We passed their dessert case as we headed out of the restaurant and inside the market. 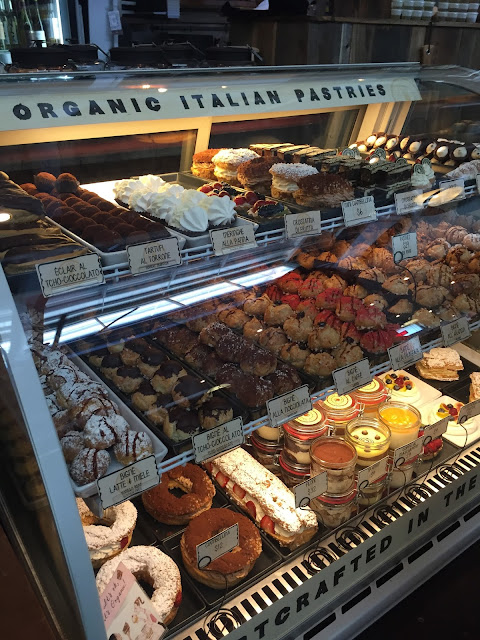 The market is small, but jam-packed. I just love places like this. This is the type of place I can spend all day with friends eating, shopping, strolling around, and eating some more. 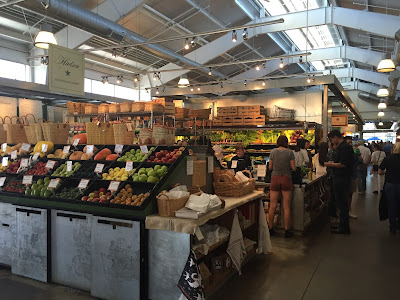 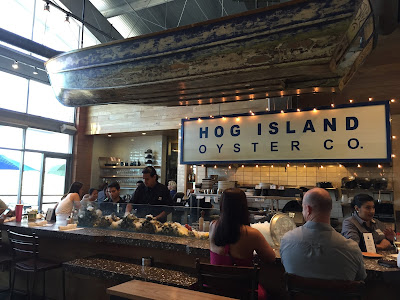 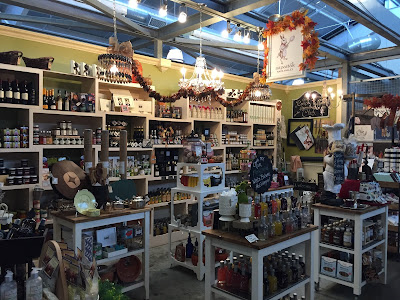 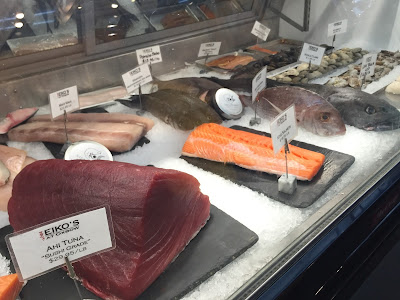 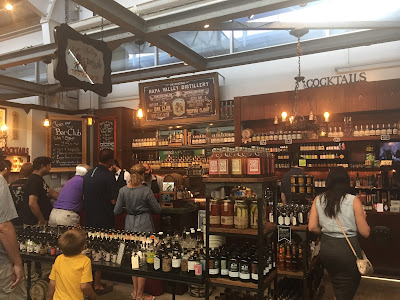 As we made a full loop around the first market building, Landon decided to throw a fit over some apple juice. I really wish someone could give me the exact day and time that he would realize pouting and whining will never get him his way. If I knew when it was going to end, at least I could have a real day to look forward to. Until then, we took it as our cue to leave and instead of sharing in some treats, we all got back into the car empty handed.  As I said, I could have spent all day here with friends, but obviously not with a four year old. Yeah, sometimes being Mom sucks, there I said it.

I had planned going to at least one other winery, so we headed back up the road and within minutes Landon was asleep. We figured a nap was probably very well needed and we hoped he'd be good for one more winery. As we drove the 45 minutes North, the hills became more pronounced and the valleys tightened until we were driving through some beautiful areas. Adam's camera broke earlier this month in Kentucky and is currently being repaired so since all we have right now is our phones, we didn't bother to pull over, but hopefully sometime we can make the drive again so Adam can get some pictures. The drive through Napa with the hills and the vineyards really is pretty and that is exactly what lead me to our next winery, Sterling Vineyards. I also knew there would be a 'wow' factor that Landon would love. 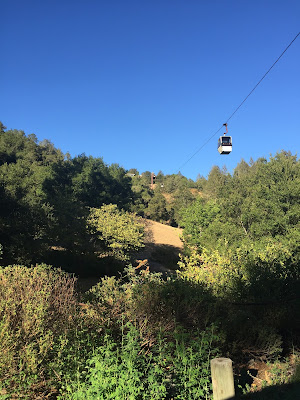 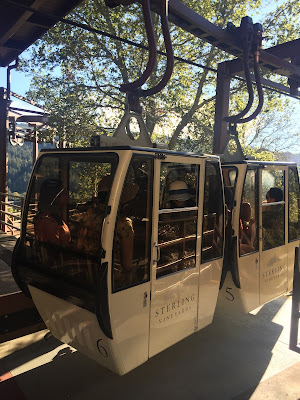 And I was right, he thought the gondolas were the coolest thing! In order to get to this winery, you take a short 4 minute gondola right up to the winery. This short ride, gave us the first of many beautiful views. 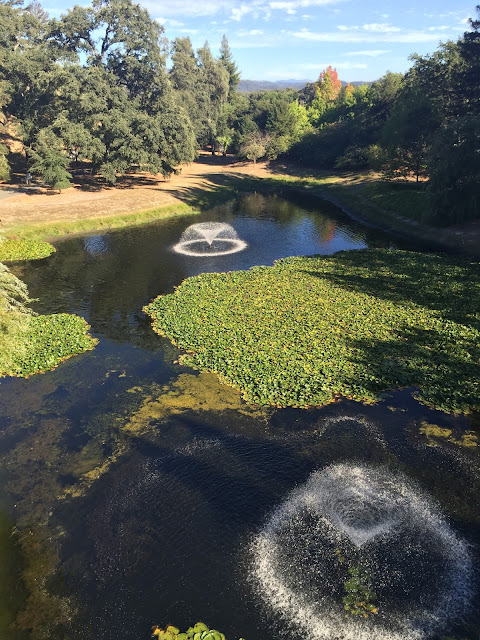 And once we got the top, we filled up my two wine glasses (the tasting came with the ride but Adam doesn't drink), we made our way out to the patio where the views got even better. 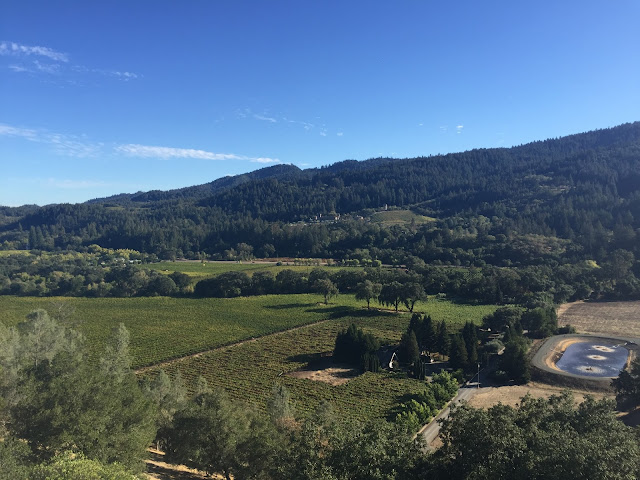 Another winery on our list, Castello di Amorosa, sat just in the middle of the clearing halfway up the hill. If Adam had his camera, this would have been the perfect place to take a great picture, but instead we just enjoyed the scenery and the wine. To be truly honest though, the wine wasn't good, at all. As I mentioned earlier, I had Adam's glass as well which meant getting 12 samples from all six of the stations left me pouring out a little from the station prior. Good thing I had already some amazing wine at Grigch Hills or I may have been sorely disappointed,  True wine enthusiasts should skip Sterling Vineyards. People wanting to see wine country in a different way and people with children, should most definitely make this a stop along the way.

Landon's fun didn't end with the gondola ride. At the top, he was given a kids box which included a water bottle he could wear around his neck, a snack, and some coloring pads. Pure genius on their part and a great way to help deal with kids at a winery. 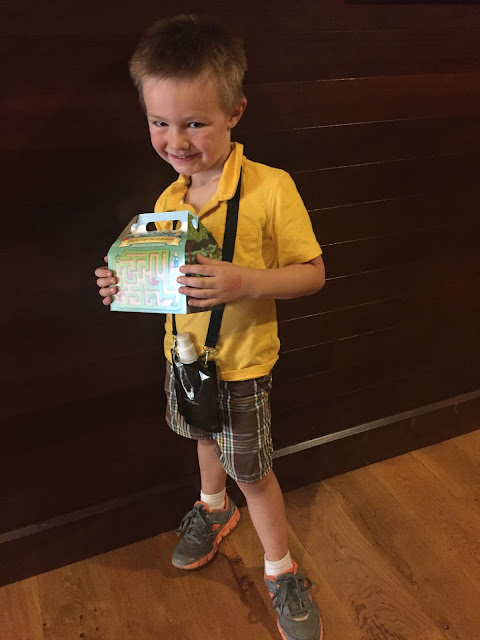 He also loved being able to walk around their huge complex and see the process unfolding before him. He required we watch all the videos at the various stations and actually really seemed to want to be involved in the education here. 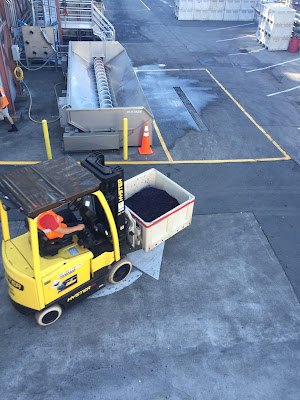 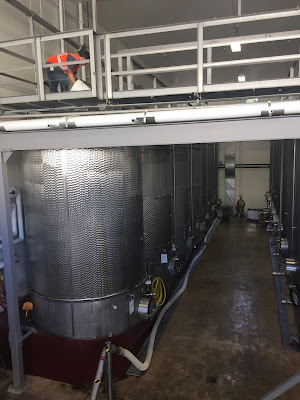 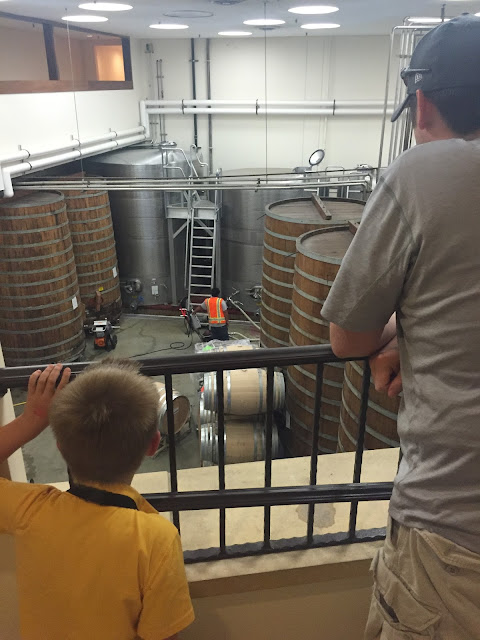 They may have not had the best wine, or even good wine, but it was still worth the visit. Especially as interesting as they made it for kids, intentional or not. I would have loved to take Landon on a tour, but a four year old only listens to a tour for about two minutes. Yet the entire time we spent here, he was interested and intrigued. When we sat to enjoy the view, he busted out his box and, overall, it was a great visit for all of us. Too bad their wine just wasn't up to par. When it was finally time to leave, I drug these two winos back down the gondola and to the car. It's hard being the only responsible one in the family. 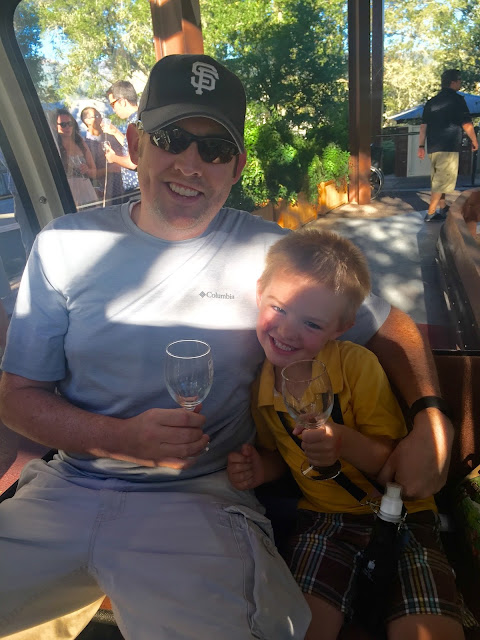 We drove home via my favorite route, the one that leads us across the Golden Gate bridge. Though it cost us $6.25 and I've seen this bridge hundreds of times now, it never fails to make my heart flutter a bit when it first comes into view. 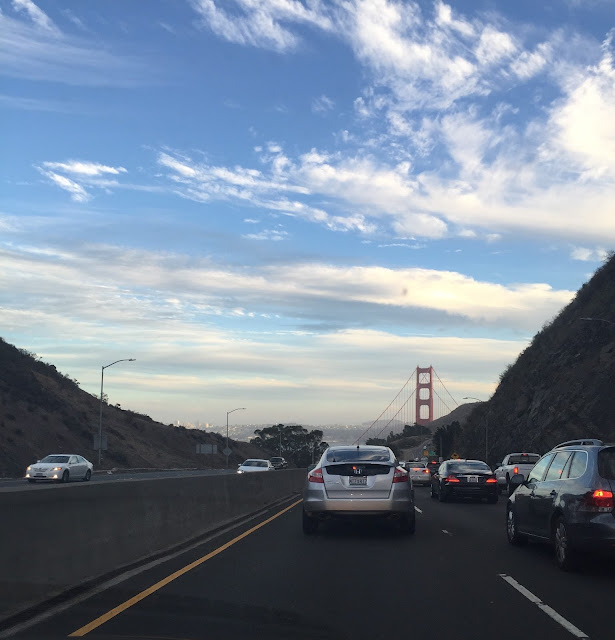 As we got closer to home, we hit Ocean beach just as the sun was setting and witnessed yet another beautiful site. 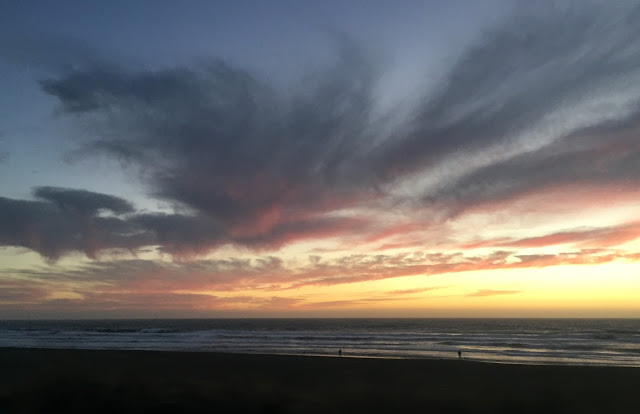 There is nothing more perfect to the end of a wonderful day than a beautiful sunset. As much as I sometimes wish a day would never end, with an ending so beautiful, it's a hard thing to resist.