September was an AMAZING month and we couldn't have started out any better than going back to Kentucky to visit our family and friends. During our short visit, we managed to pack in a lot and enjoyed every second we had with people we love. We also managed to get a lot of well needed pool time, eat way too much yummy food, and make a visit to our favorite winery. I wouldn't even know what pictures to share, so instead I made this video which seems to have captured the entire trip in a nutshell.

It was extremely hard to get back on the plane and come home, but once we were home we didn't have a second to be sad. We got home, put some fresh sheets on Landon's bed, and then welcomed some first time visitors and our friends from Nashville. They bought Landon a Bayern-Munich soccer uniform which he immediately put on and has worn constantly since. Not only that, but they have an adorable little boy who we all had a blast with. He just loved Landon and Landon loved him. It was so much fun sharing a little bit of this city with them and getting to hang out. We hope they loved it enough to come back soon! 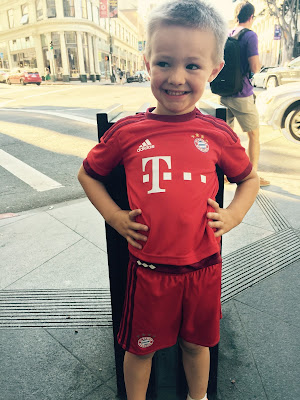 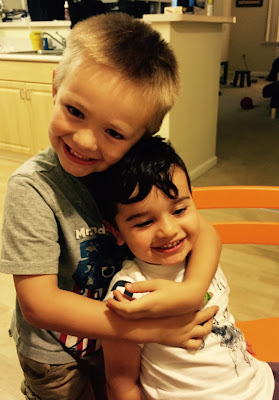 The day they left, it was finally time to wind down from our trip and their visit. Landon had received some money in Kentucky from family so we took him to Target to pick out something for himself and then decided to go for a drive. We ended up at a winery (no surprise) in Half Moon Bay and while I did a wine tasting, the boys built a submarine. When we were finished there we continued down the road and ended up at PF Changs for some dinner. Spur of the moment drives can be fun! 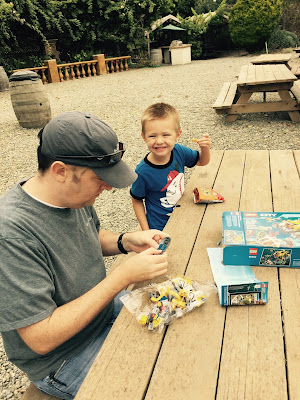 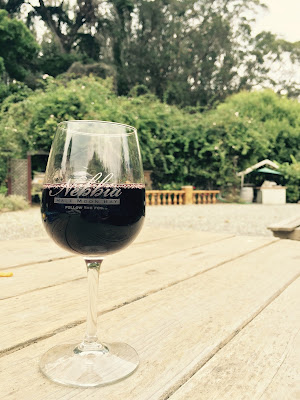 All the eating from our trip to Kentucky seemed to follow us home, so the next morning after church we decided it was time to get out and do some hiking. One our favorite nearby areas is Mt. Tamalpais, with many different trails we decided to go over and hike the very top, an area we hadn't been before.

The views from Mt. Tam are spectacular and the short, but uphill hike to the top was rewarded with great views down into the bay. This is also great place to watch the fog rolling in and this day it was really moving. 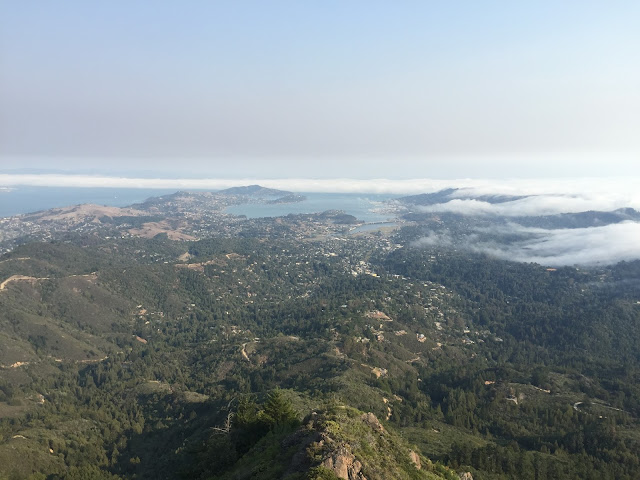 It felt so good to get out after two weeks of being inactive and eating way too much. This is the time of year where the year in the area really heats up and usually the fog fades to make way for beautiful sunny days best to be enjoyed outside. 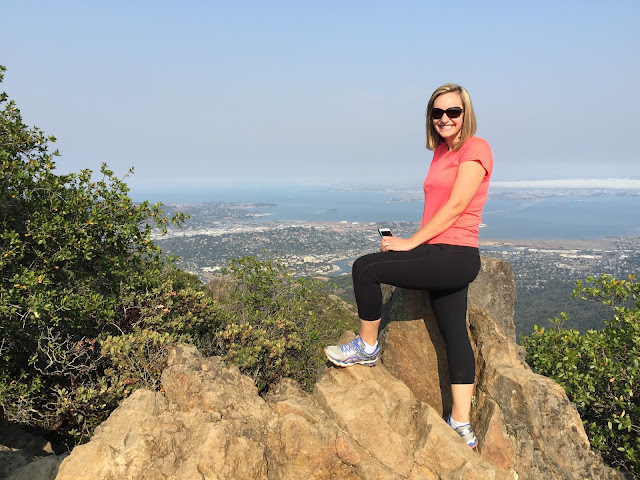 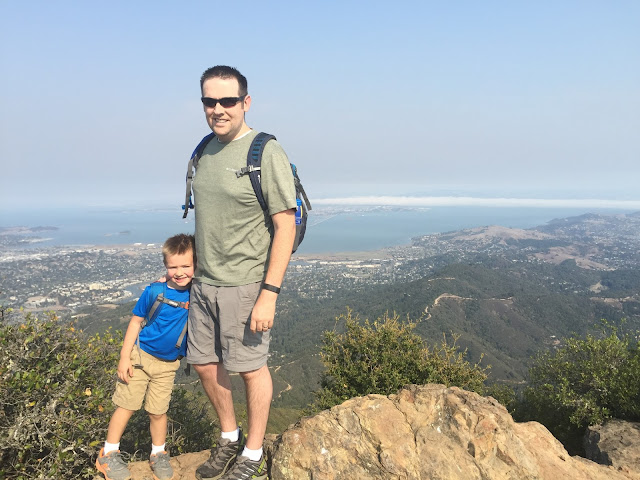 The following weekend, I took Landon with me downtown to visit the Ferry Building. I wasn't sure how he would do, but he absolutely loved it. We started out with some delicious Lemon and Chocolate Italian donuts for breakfast and sat on the water's edge while enjoying our sweets. 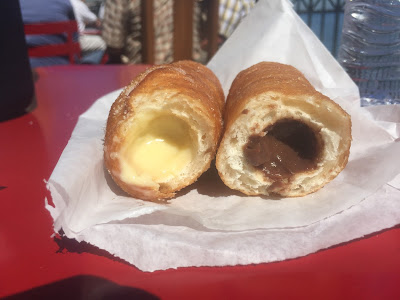 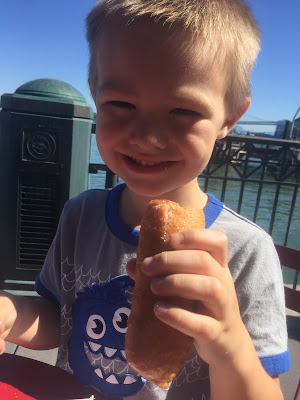 Afterwards, we walked around the market. Landon's favorite thing was a huge lifesize coloring page at the local bookstore. He had so much fun coloring it that we actually went back twice. We also visited the playground just down the street. When we first moved to the area and had corporate housing downtown, we played at this playground a lot. He loves it and, with tons of kids constantly coming in, we spent a good bit of time there. 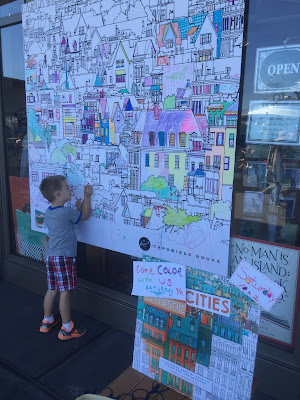 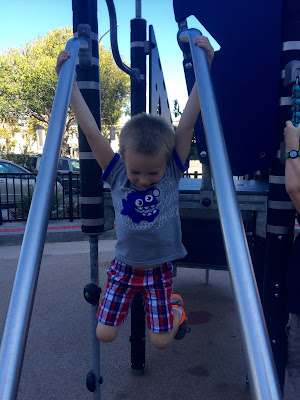 Once he was hungry, we headed back to the ferry building to get some lunch. With so many different places to pick from we started out in line for Mexican and then changed our minds. He picked mac and cheese from the Cowgirl Creamery and I got some fish and chips from a San Francisco Fish Company. We ended up sharing and all of it was amazing. I'm pretty sure, no matter what you get there, you can't go wrong. Landon ended our excursion with some ice cream, but by then I had to call it quits. After a long morning and afternoon of eating and playing one of us had to go back home and have a nap and it wasn't the little one. 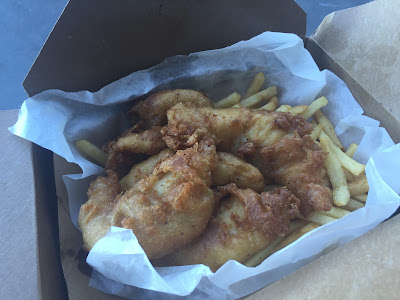 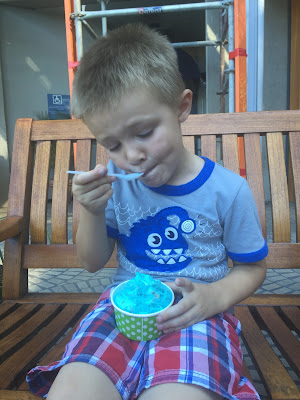 That night, we found some cheap last minute tickets to the San Francisco Giants game. We hadn't been to a game yet, but it was on our list so we bought the tickets and the next morning headed out to a 1 pm game. We took BART and on the way to the stadium passed Adam's office. His office is on the 9th floor right in the center of the financial district. 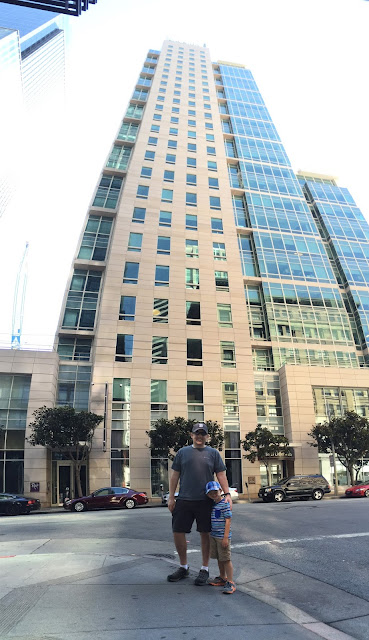 We made it to the stadium just before the start of the game. It was a beautiful day. 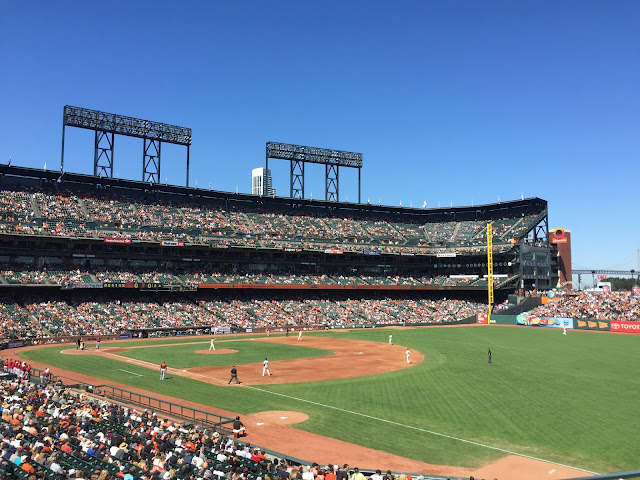 The only problem,? There wasn't a cloud in the sky, our seats were uncovered, and it was 90 degrees. For all of those reasons, it wasn't very enjoyable and no one could really concentrate on the game. After just two innings, we left. I was super disappointed and annoyed to have wasted the money. I didn't see this picture until later, guess it just isn't the case for some of us. 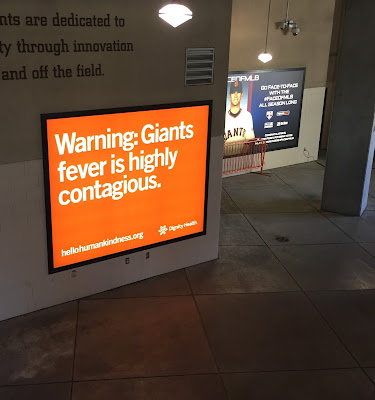 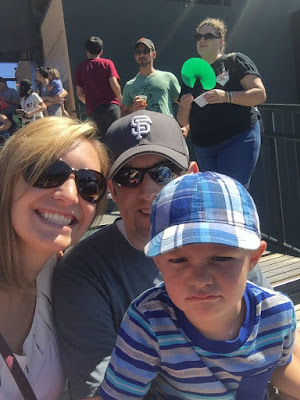 Since the season is over now, we decided that next year we will try for a night game. I think it will be a lot more enjoyable for all of us. To make it all better, we went to California Pizza Kitchen and I had a glass of my favorite wine. The day didn't turn out so badly after all.

The last weekend of the month was well spent. Saturday, we headed up to Napa and knew we were getting close when we passed these on the road. 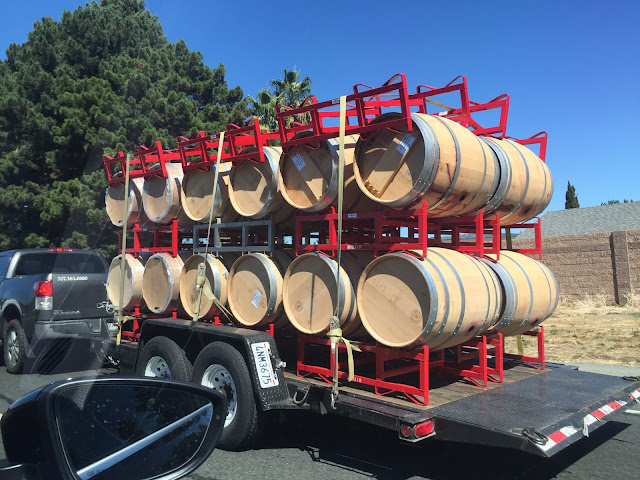 As I talked about HERE we visited Grigch Hill Estates and Sterling Vineyards. I was worried about taking Landon along, but we ended up all having a great time. Proof you don't have to drink to enjoy Napa. 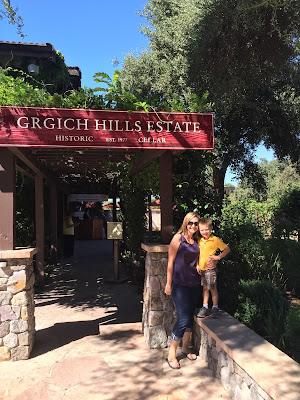 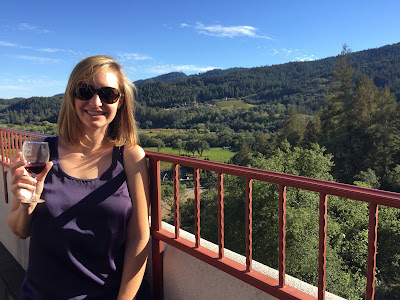 Sunday, we finally managed to make it to the Point Bonita Lighthouse for a full moon tour. We were especially excited because it also happened to be the blood moon. We arrived at the starting point for the hike down to the lighthouse where our high hopes were quickly downsized. Despite it being nice and sunny at our place, Marin was pretty foggy and we were not sure it would clear up quickly enough. Still,  we had come this far so we weren't turning back. We ended up really enjoying learning all about the lighthouse and its history. Despite having been to the lighthouse before, this was the first time we took a tour and even the Munchkin enjoyed talking to the tour guides. 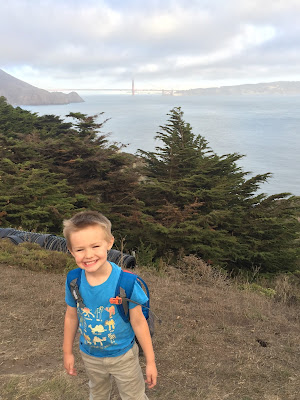 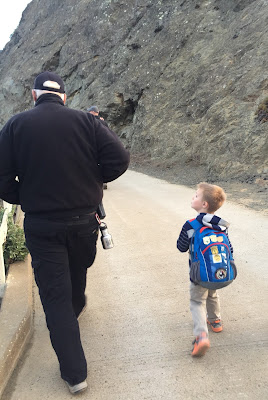 By the time the sun was suppose to set, it was obvious that we wouldn't see a moonrise. Instead, we just walked around the lighthouse and enjoyed what sunset we had through the clouds. Regardless of the day, this place is always beautiful. 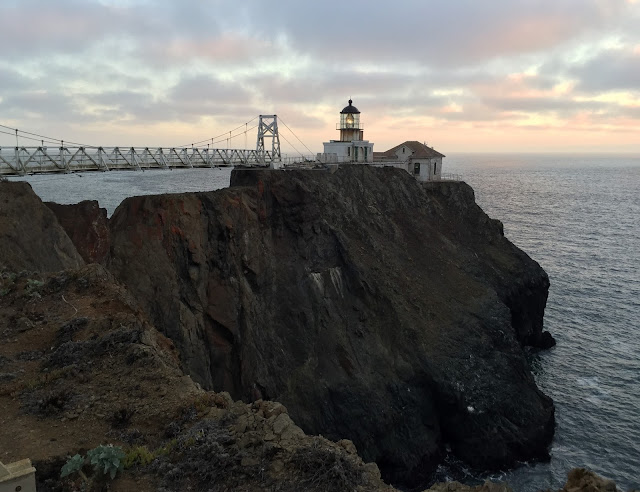 Since it was a dud of a sunset/moonrise we just kept it on our list to try and do again another time. None the less, it was still really fun and a great little family excursion. 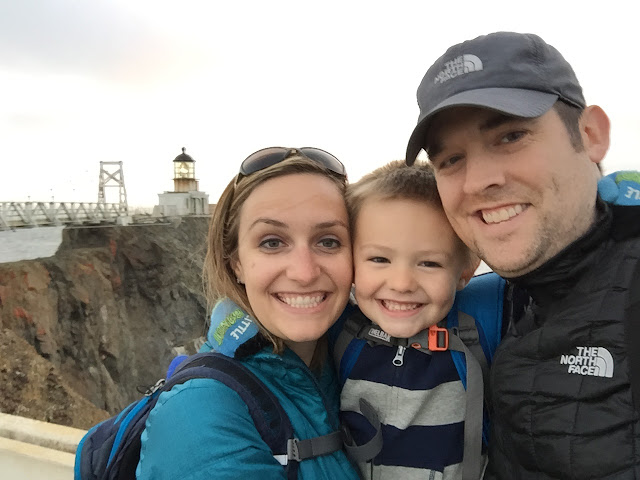 To finish off the weekend, Landon and I went home and made a no bake cheesecake. I'm pretty sure Landon could have done this completely on his own, it is that easy. I really enjoyed making this quick dessert with him as it was something my Grandmother use to always make. Despite being an amazing cook, I always loved her no bake cheesecakes and now Landon knows their goodness and loves them too. 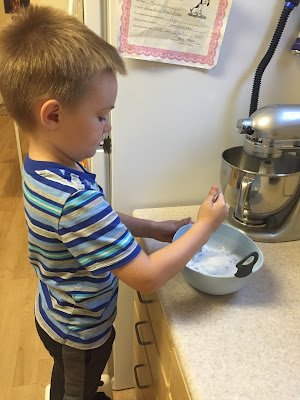 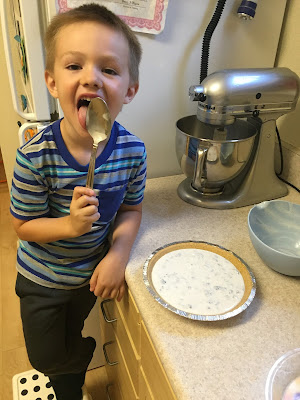 September was a great month full of family and friends and lots of good food! It's hard to believe October is already here, but I cannot wait for all the fun events and activities that the holidays bring. Another month in the history books and so many more wonderful memories made. Life is good!