Since the beginning of the year, we've had been planning to go down Hwy 1 in the middle of October. It's a great time of year in the Bay Area, so the plan was to rent a convertible to visit Hearst Castle and check out a few places along we way we hadn't yet seen. But, when the chosen weekend drew near, it just wasn't feeling right. I love driving down Hwy 1 with the beach and the ocean and I love convertibles and touring famous estates, but there is something I've come to love even more...mountains. (I can only imagine the smile on my Husband's face as he reads that sentence).

Last Monday, I noticed that the fall colors in the High Sierras were starting to peak. It piqued my interest as well and we started contemplating trading the sand beneath our toes for rocks soaring above our heads. Tuesday night, while discussing it and trying to make a decision, I was scrolling through Instagram and saw two back to back pictures. One of  golden leafs from Yosemite followed by a picture of a hat that said "Choose Mountains". I decided it was fate and we chose the mountains. What a WONDERFUL choice it was!!! 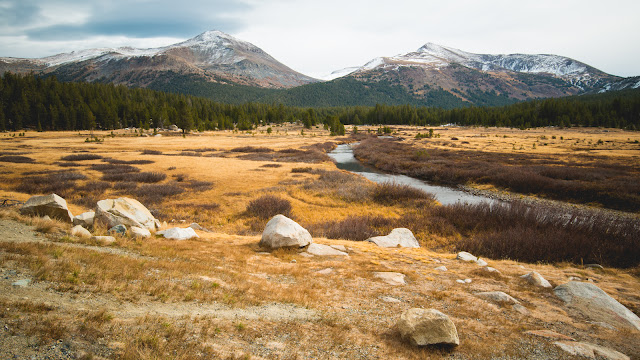 Wednesday night, we lucked out and found an open camp spot at June Lake. It was the very last weekend this campground was open and we knew it would be cold (as in lows in the low 30's). In Sequoia, we camped out in the 30's and I froze so Thursday night we headed our favorite place (REI) and bought some new zero degree down sleeping bags. Now we were really ready for the mountains.

Friday, I tried to leave work early and by 4pm we were on the road headed to our campground. Unfortunately, leaving the peninsula at 4pm on a Friday is a nightmare. We barely stopped at all, but didn't arrive to our campsite at June Lake until just after 11pm. Landon was alseep and it was cold, so Adam and I hurried to put the tent up in the dark, then we hurried inside our tent to get warm and cozy and snuggled in for the night. The upside of arriving at your campsite in the dark, is waking up to something unexpected. As soon as I opened that zipper at 7:30 on Saturday morning, all the stress and cares from the week melted away. The sun hadn't yet reached our tent, but it was kissing the tops of the mountains, color was bursting all around us, and the lake was just in sight. 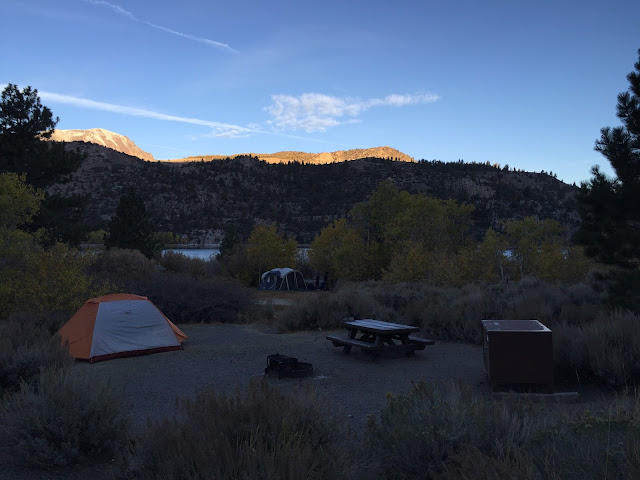 We headed out for some breakfast then made our way into Yosemite. June Lake is beyond Yosemite and right outside the Mammoth Lakes area of California. We had traveled through Yosemite the night before to get our campground and into the Inyo National Forest where we stayed. We made our way up the scary, but breathtaking Tioga Pass and had a short stop at Tioga Lake so Adam could take some pictures... 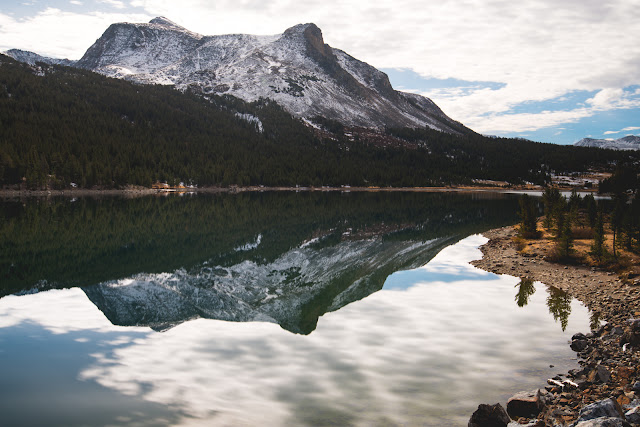 ...and Landon could do something we knew he would love...play in some snow! However little it may have been, just like we thought, he was super excited to see and touch it. He ran across it, stomped on it, made snowballs, and pointed out all the patches he could possibly find. He was ecstatic! 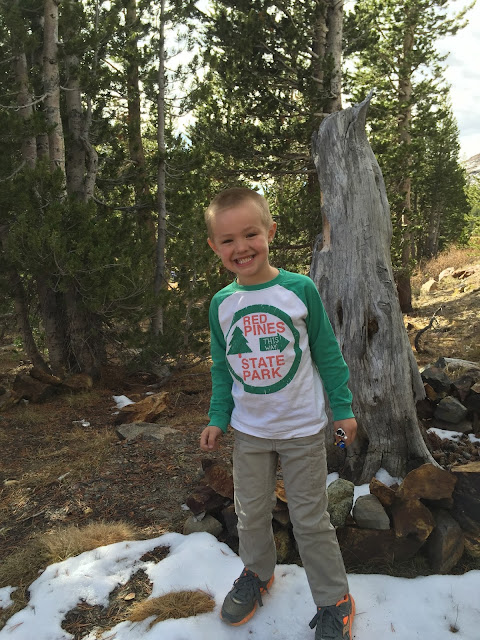 After a little bit, we hopped back into the car and made our way to Tuolumne Meadows, the trail-head for our day's hike. Adam had been wanting to do this hike to Cathedral Lakes for about a year. At 8,500 ft with over 5,000 ft of elevation change and 9.5 total miles, we were not sure Landon would be able to do it. We had been holding off, but decided to go for it. If we ever wanted to see Cathedral Lakes, we'd have to take the little one with us so we decided to go slow and see how it went. He made it the first half mile which is completely uphill without a single compliant. Adam even showed him how to use the hiking sticks properly when walking downhill. 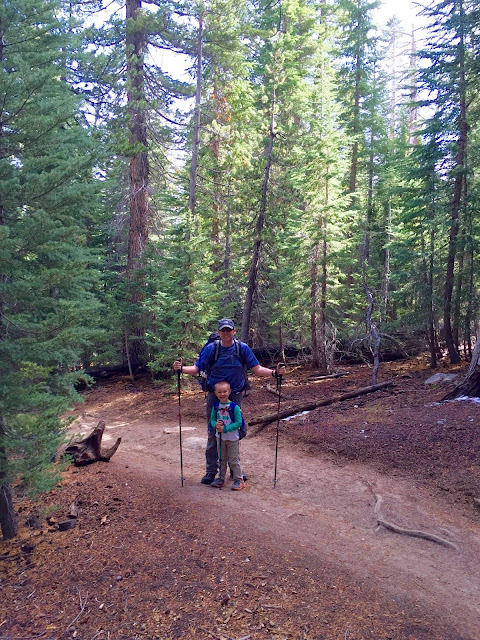 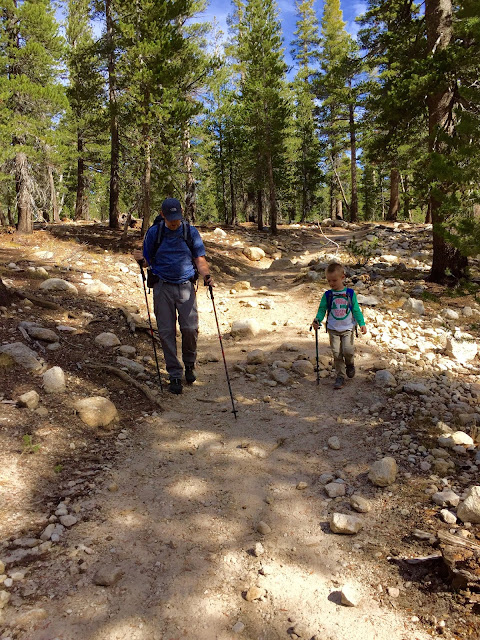 Despite being a popular trail, we were there at the end of the season and had it mostly to ourselves. The scenery was beautiful as we hiked through forest and among meadows. Landon continued to point out ALL of the snow we encountered and Adam got his first taste of the John Muir trail as this is part of its route. 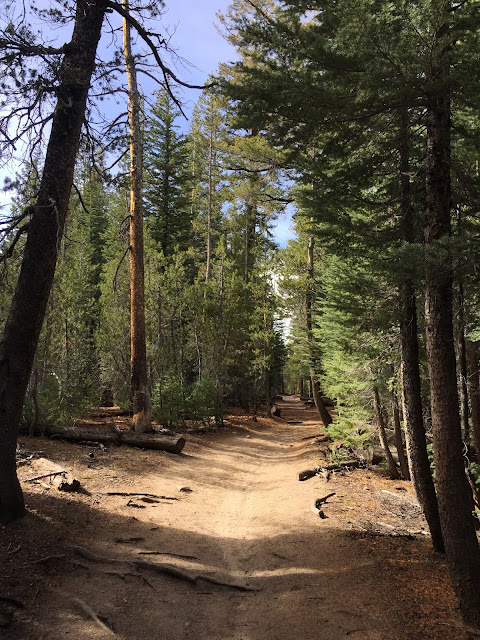 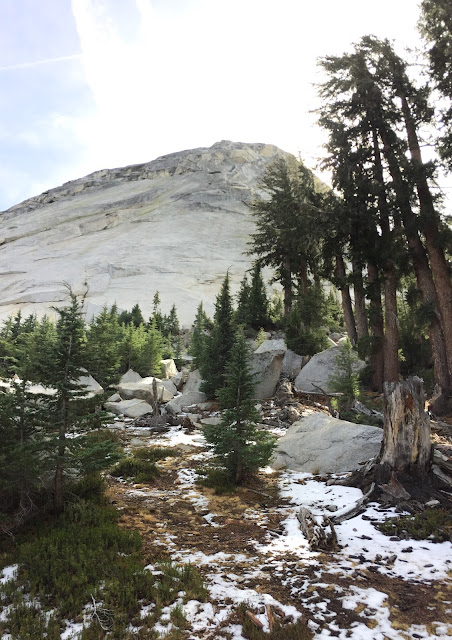 After 2 hours and 4 miles we came to Lower Cathedral Lakes. The larger and, you guessed it, lower lake, it is the most visited of the two lakes. As we walked through the meadow and to the edge of the lake, we turned around to see Cathedral Peak rising up in the distance. 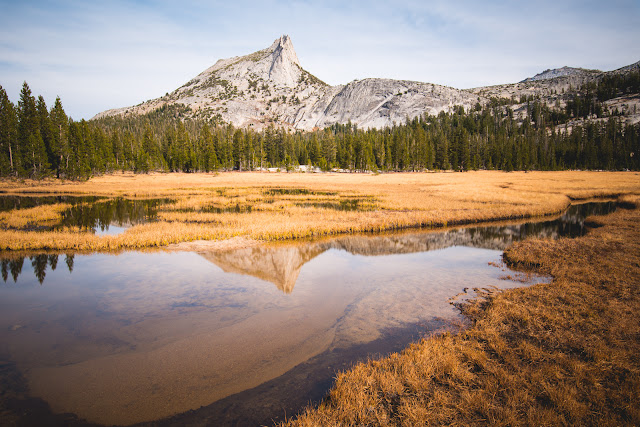 Landon and I ate some snacks and rested on the huge granite rocks surrounding the lake while Adam took some pictures. It is the massive granite that makes Yosemite so spectacular. It isn't just the rocks that soars above, but the massive granite at your feet as well. From the size to the color, these stones never cease to amaze me. 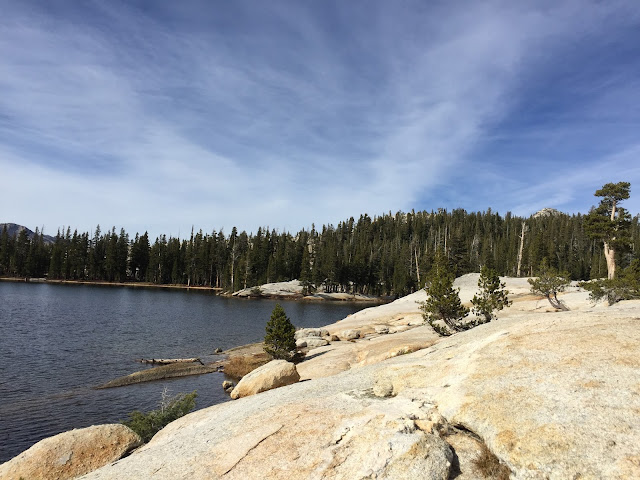 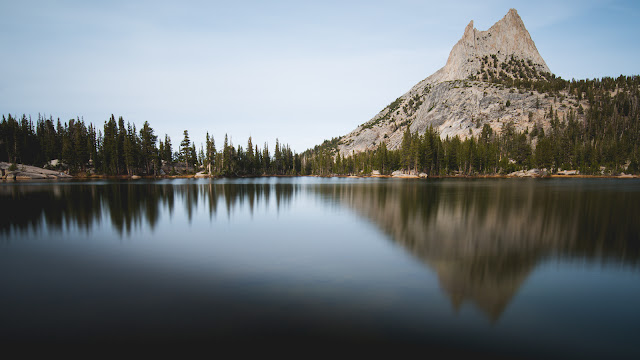 With Cathedral Peak soaring just past the lake, it doesn't get more picturesque. Unlike Lower Cathedral Lake, we had this entire lake to ourselves and Landon and Adam spent a good amount of time yelling and listening to their voices echo. I pulled out my chair and soaked it all in while Landon got out his legos and found the littlest bit of snow he could to play in. 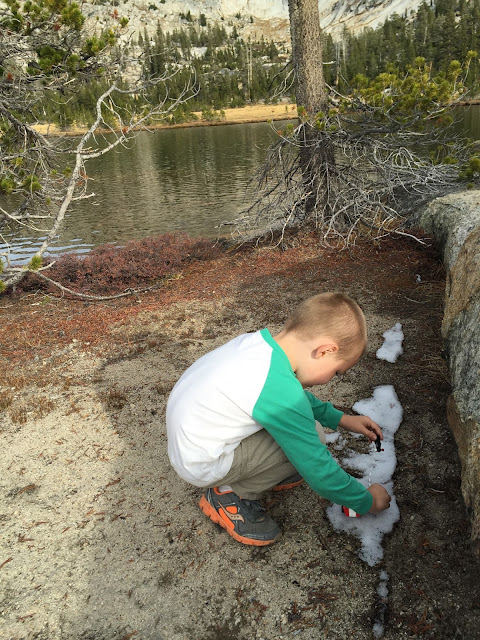 Adam hiked around the lake a little more to take pictures. He climbed up a huge rock and took this picture. It is my favorite of the day. Just seeing it makes me want to drop everything and go back immediately. 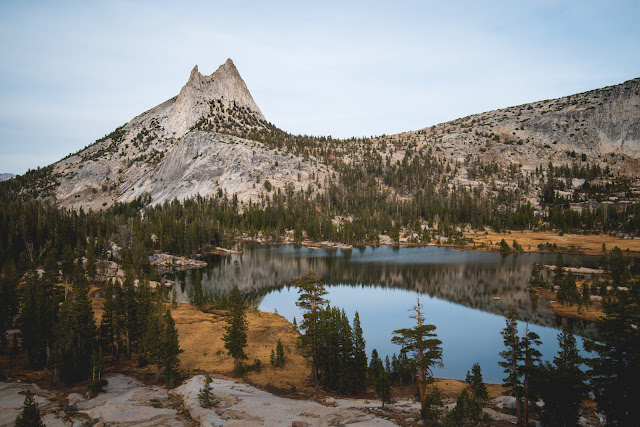 Adam found this quote by John Muir of Cathedral Lakes, I wish it was something we had been able to read while we were sitting there, staring at this gorgeous scene. Still, just looking at the picture now I can't help but really understand his words. I always feel closer to God when I am in nature. Muir was the same and always put it so eloquently. Of Cathedral Lakes he said,

"No wonder the hills and groves were God's first temples, and the more they are cut down and hewn into cathedrals and churches, the farther off and dimmer seems the Lord himself. The same may be said of stone temples. Yonder, to the eastward of our camp grove, stands one of Nature's cathedrals, hewn from the living rock, almost conventional in form, about two thousand feet high, nobly adorned with spires and pinnacles, thrilling under floods of sunshine as if alive like a grove- temple, and well named 'Cathedral Peak'

There is nothing else to say. He said it perfectly.

We had planned to stay until Sunset, but it was pretty obvious that the sun wasn't going to be putting on a show for us. We played at the lake for a bit before starting the long hike back to the car. We said goodbye, vowing next time to get a wilderness permit and stay for the night. 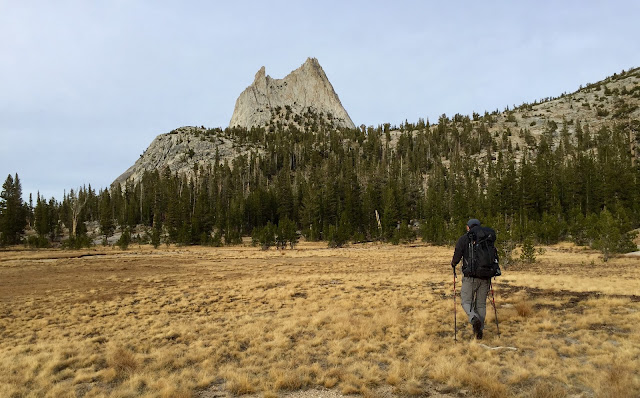 After having been a complete rock-star all day, as soon as we started hiking back Landon was ready to be done. The first two miles of the 4 mile hike to the car went pretty smoothly. At just over 1.5 miles left, we took a short rest and it was obvious he was over it. 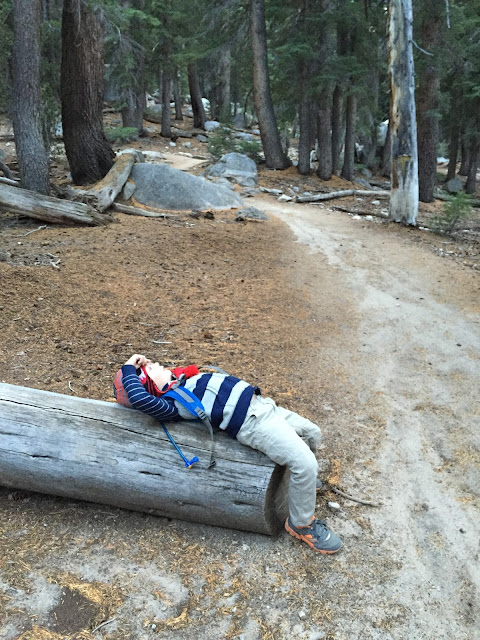 By our last mile, we were all pretty tired and Landon spent a good portion of it crying. We tried to distract him by talking about Halloween, but every so often it wouldn't work and he'd be a pitiful mess. He said he was sad that he missed Kaiser, but we both knew it was just hard, his little legs hurt and he was tired and sometimes hiking sucks. Still, we've never carried him yet so Adam generously took his backpack from him and we talked him through it. We also may have told him if he cried too much the coyotes would come and get us. In our defense, there is a chance a small child crying would attract them thinking there were other coyotes nearby. So maybe it wasn't a complete lie. A parents sanity is important too!

Eventually though we made it to the car and we couldn't have been more proud of him for hiking over 9 miles on his own. I know he didn't enjoy every second, or any second of the last hour, but I hope one day he really does. We got back in the car and headed toward Mammoth Lakes for some well deserved dinner. Landon passed out almost immediately and we were stopped at the edge of the park with the road being closed due to a fatal accident on the only road out of the park. With no alternative to getting to Mammoth Lakes or our campground, we waited out the hour in our car then made our way to some of the best pizza we've ever had. By the time we got there, ate, and got back to our tent it was late. For the first time ever, we didn't even bother with a campfire and us three tired people crawled back into our tents and quickly fell asleep for the night.

Sunday morning, we packed up our gear and drove around June Lake and the surrounding area for a bit before heading back home. I wish we had more time in the area as I so enjoyed this area. June Lake is especially pretty and a great place to camp. We headed out on the last day of the season, but can't wait to come back and enjoy it in the Spring. I'll definitely have to bring a kayak as this lake is perfect for a nice little excursion. 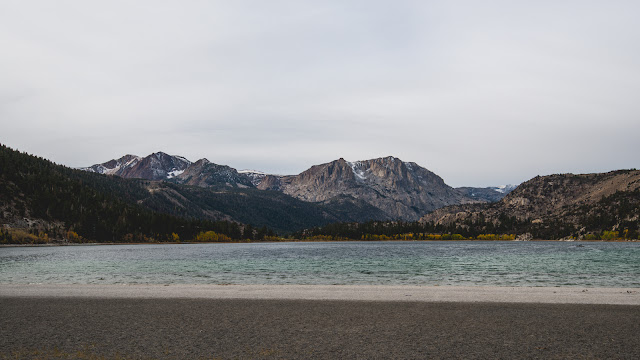 We drove around and admired all the pretty colorful trees in the area. 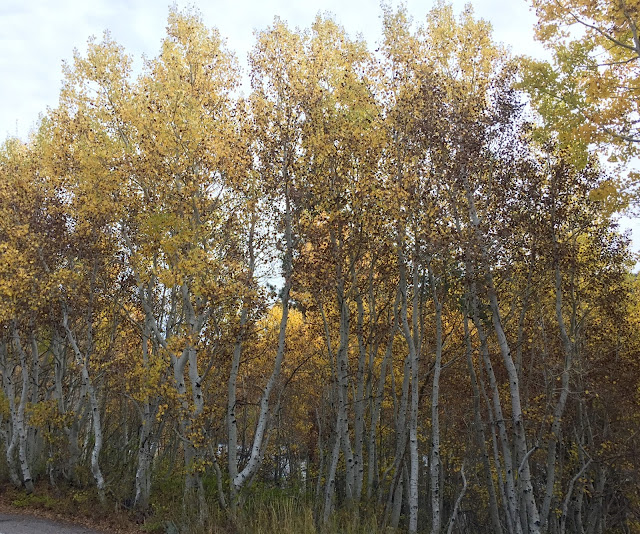 We came at a great time and although not all the trees were at their peak yet, there was plenty of color. With the lakes, the snow brushed mountains and the color of the trees, it was one beautiful sight after another. 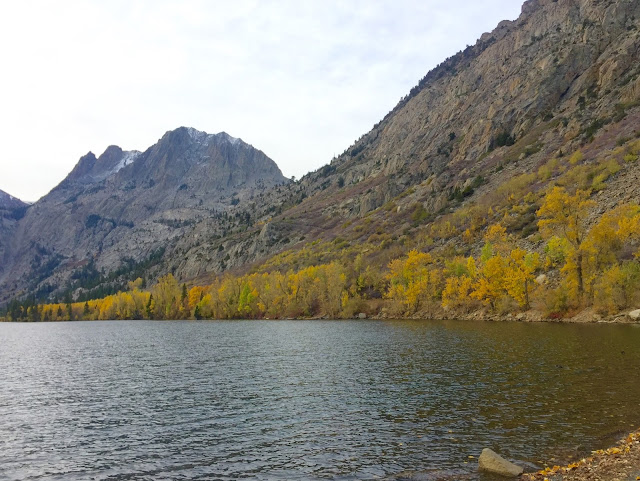 San Francisco doesn't get a Fall, but it is so nice to travel just a few hours and be in the middle of it. I could have driven these roads all day long and never got tired of the views. 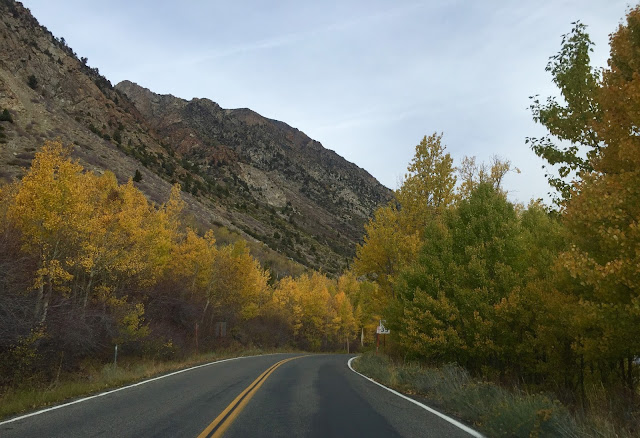 But, it just couldn't be. We had to get back home so Adam could leave for a business trip and we could prepare for the week ahead. So we said our goodbyes through our tears and headed back to the concrete jungle. As short as this little weekend was, it was perfect and amazing and exactly what we needed. The hat was right. It said "choose Mountains" and I'm so glad we did. We crossed an amazing place off our to-do list, added a great new place to our future camping trips, refreshed our souls, and pushed ourselves to our limits. I couldn't be prouder of our little trooper and, despite his real tears, I can only hope he gained as many fond memories of this weekend as Adam and I did. 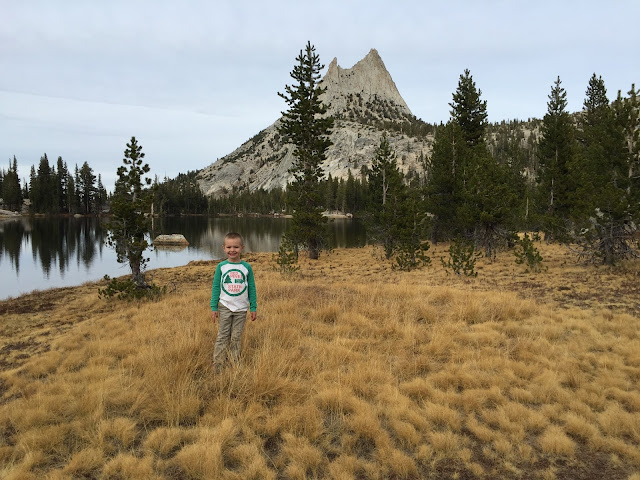