A Winter Trip to Lake Tahoe

Ever since we visited Lake Tahoe this Summer, we knew we needed to come back when the snow was falling. Last year, there was no snow, but this year it is a completely different story. Since one of Landon's favorite things in the world is snow, we decided to wait until his birthday weekend to go. It also had the added bonus of taking my Mom and her boyfriend Jack to see stunning Lake Tahoe too.

Friday afternoon, we loaded into the car and set off for the lake. We didn't arrive until late Friday night, but despite the late hour when we arrived it couldn't have been more perfect. If you think of the perfect winter lake retreat this darling little condo would be exactly what you would picture. I found it on airbnb and it ended up being the cheapest place we could find within a hour radius of the lake. The best part, it was walking distance from the lake, we had a full kitchen, and this amazing fireplace which heated the whole condo. You can believe, we were constantly fighting over who got this seat. 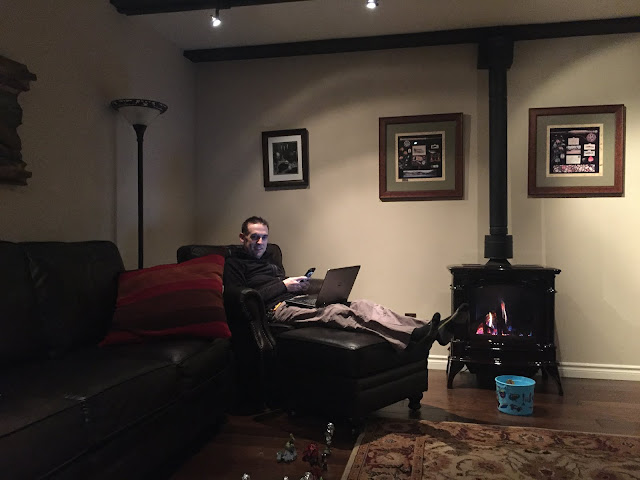 I wish I had taken more pictures of the place especially the bedrooms which were decorated perfectly for the setting. If all airbnb's are like this, I will never stay in another hotel again. So after a wonderful night's sleep we woke up early Saturday morning, made some breakfast, and got ready to explore. Landon's shirt says it all. 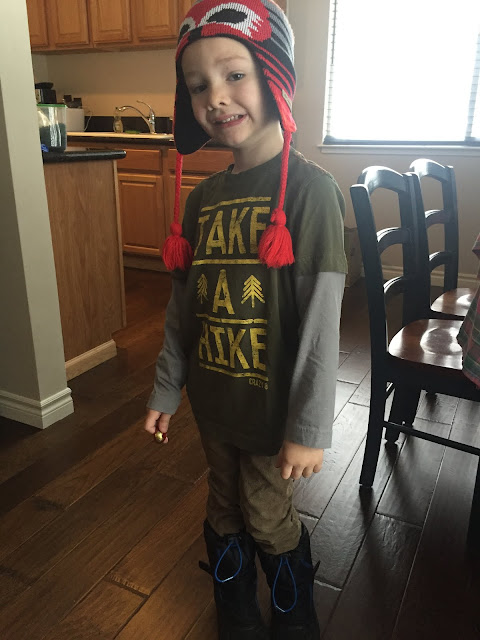 We drove down the road, rented some snow shoes, then headed up to a large meadow on Mt. Rose. It took a little adjusting to get everyone's gear on right, but once we were in the meadow we set off on a nice little hike through the meadow. 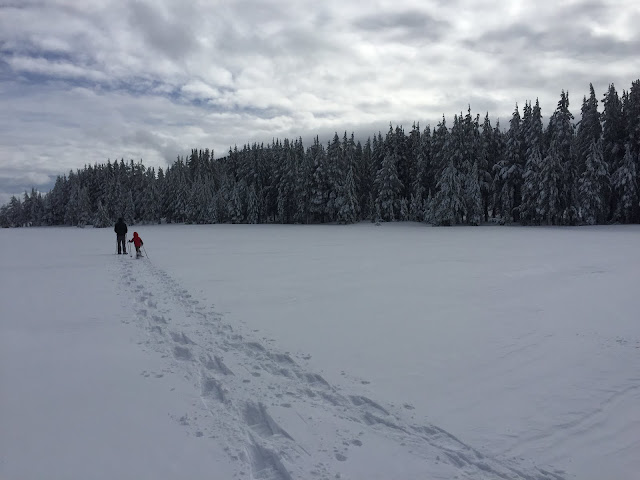 At first, we were making our own path and Landon and Adam set off way in front. Eventually, a large family in a single file passed by us creating a pathway. We jumped in their path which made the walk a whole lot easier. 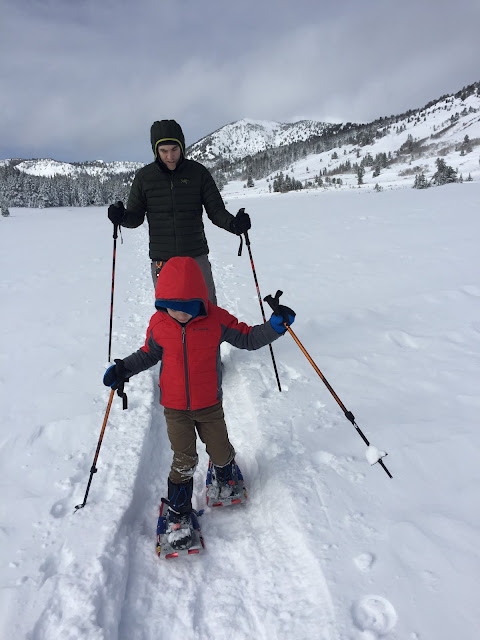 You can see what a difference it makes in the picture below. Although the snowshoes kept us from going knee deep in the snow, my Mom is standing on the already trodden down snow and I stepped into fresh untouched powder for the picture. Although you only sink a little bit, it does make a big difference in the resistance and effort it takes. 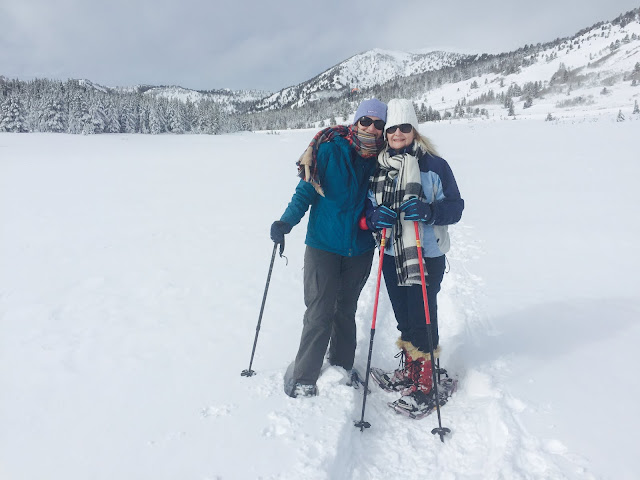 I have to give props to my Mom and Jack as they did great. It was their first time, but you wouldn't know it. They were speeding away in their snowshoes, acting like they had done it a thousand times. One of my favorite things about California is just how active people are out here. There were people everywhere snowshoeing, skiing, even paraskiing which I had never heard of or seen until then. Mom and Jack had no problem fitting right in. 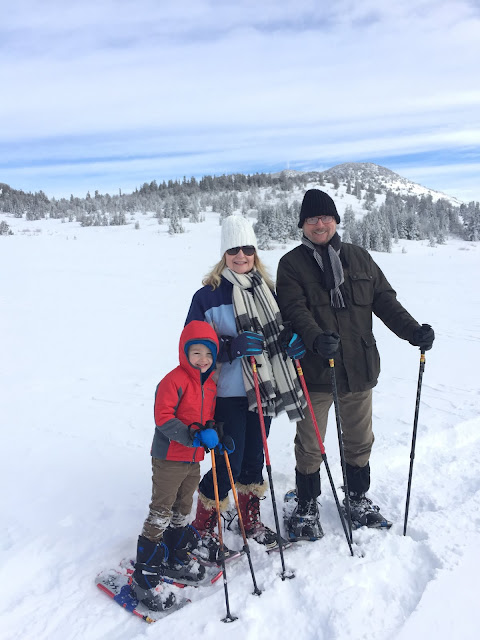 We tried to guess how deep the snow was in the meadow. We figured it had to be at least 6 feet. Large trees on the edge of the clearing were practically buried up to their tops. It was more snow than we've even seen before. 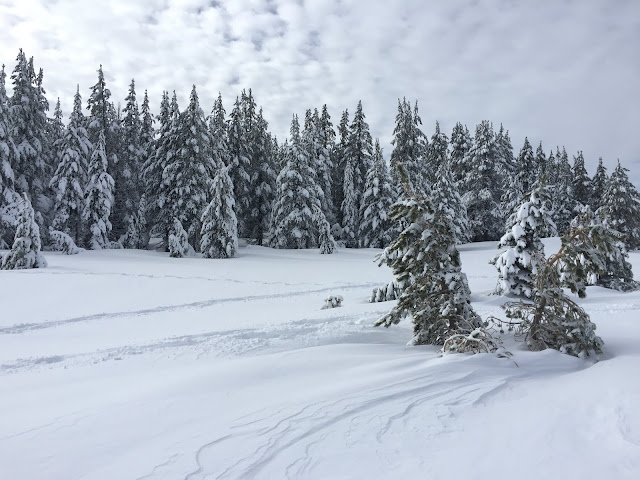 We walked through the meadow a bit, but had made one big mistake. Landon elected not to wear his snow suit so the entire time he was kicking snow on the back of pants soaking his corduroy pants. After about a mile, they were coated in snow so we turned around and headed back toward the car. It sure was beautiful being in a huge open field of snow. 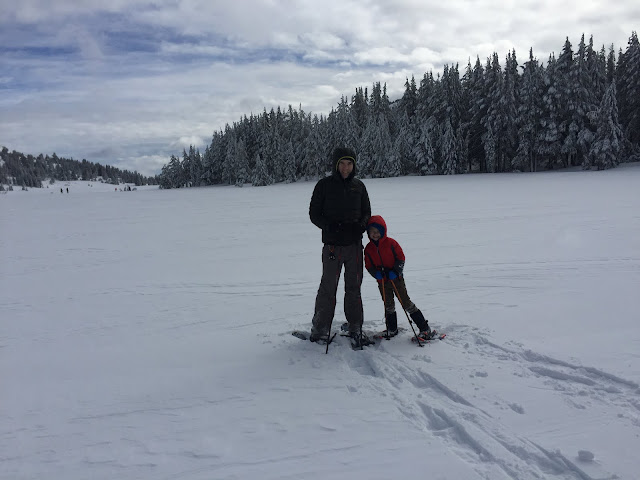 We headed back down the mountain stopping along the way for a tiny little peak over the lake. Most of the weekend, it was overcast and we were never able to show them just how blue and spectacular Tahoe really is. Since we stayed near the lake, we had some scenery at lake level, but this little stop was the only time we really got a peak from above. 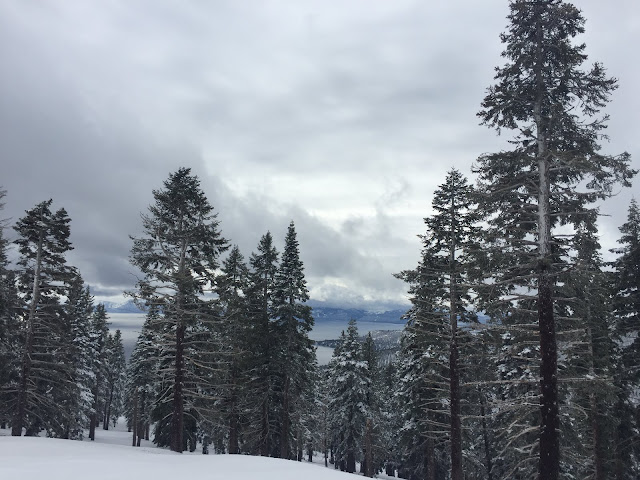 Of course, Adam had to get out and fly the drone a bit. Landon, now in his snowsuit, took the few minutes to make snowballs. Every kid should have a snowball maker which gives them the perfect snowball everytime. I rather enjoyed stealing them and then throwing them back at him. 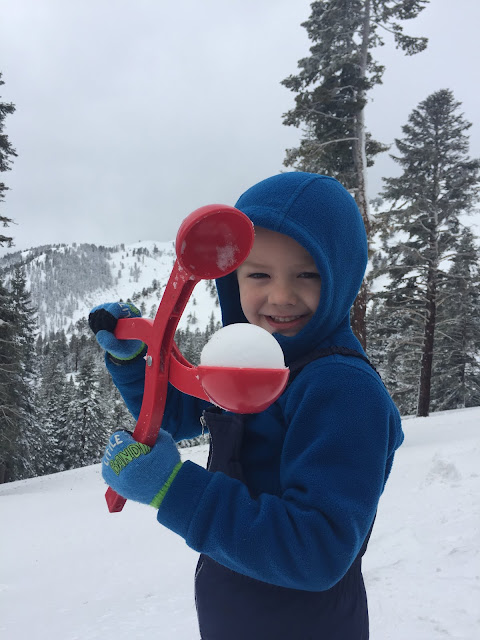 Afterwards. we grabbed some lunch at a nearby restaurant and then headed back to the condo for a little rest. We ventured out a few hours later, to the driving range down the street. Adam played with his toy a little more and Landon and I played in the snow. 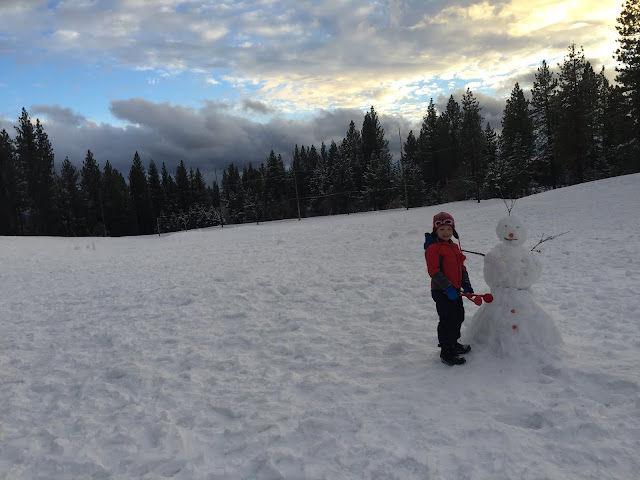 The sun sets early in Tahoe, before 5pm. Despite that, there's plenty of things to do in the area after dark, but not as many with a 5 year old. Lucky for us, a bowling alley was nearby so we decided to go play a few games. 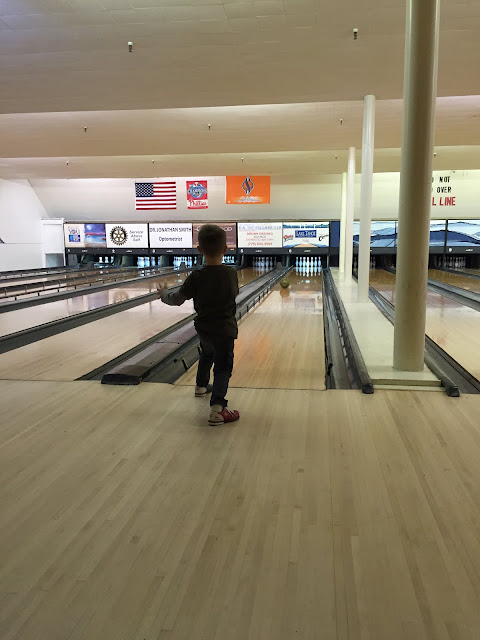 We all may have benefited from the bumpers that they put up for Landon. It was an older bowling alley, so once the bumpers were up they stayed up, but no one complained. Landon really wanted to be able to use the finger holes, but he just didn't have a big enough grasp. I did manage to get a picture of his one fall. It was pretty funny and may have been his best throw although he never managed a strike. 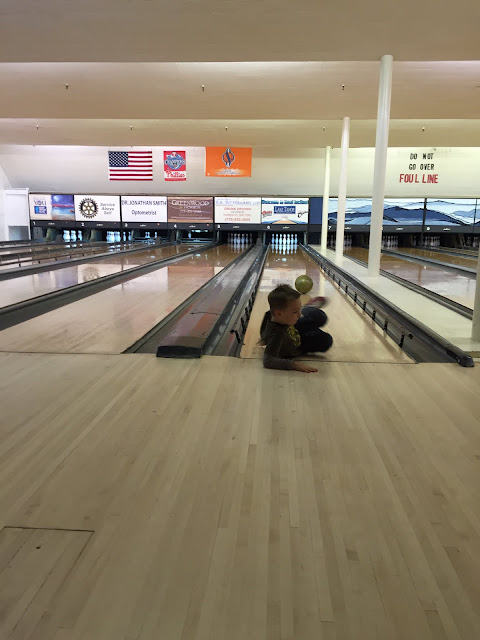 After two exhausting games, it was time for dinner and we found ourselves at local pizza place. We stuffed ourselves then made it back to our condo for some more rest and relaxation.
The next morning, we woke up to lots of snow coming down. After breakfast, we packed up the car and headed over to the other side of the lake to go sledding.  We were ready to go play in the snow again. 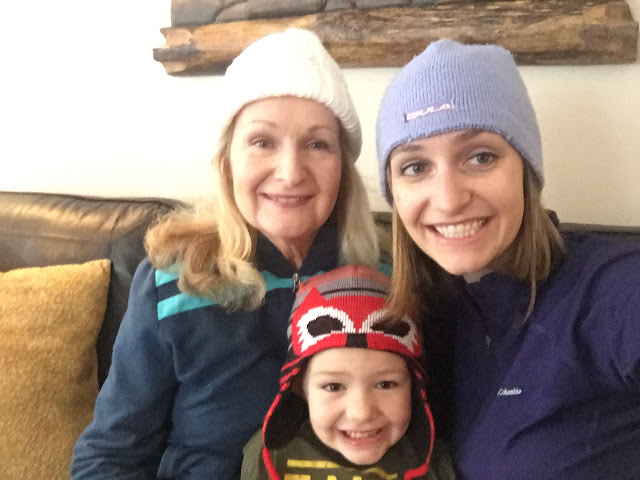 The roads had some snow and it was snow going to the opposite side of the lake. As we climbed up the mountain near our snow park, the snow started to get heavier and heavier. Before I knew it we were in white out conditions. We went from being able to see the trees and up the hills, to seeing only white with no real difference between the sky and the ground. Eventually though, we arrived at Adventure Mountain, an aptly named sledding/tubing park in the midst of many large ski resorts. 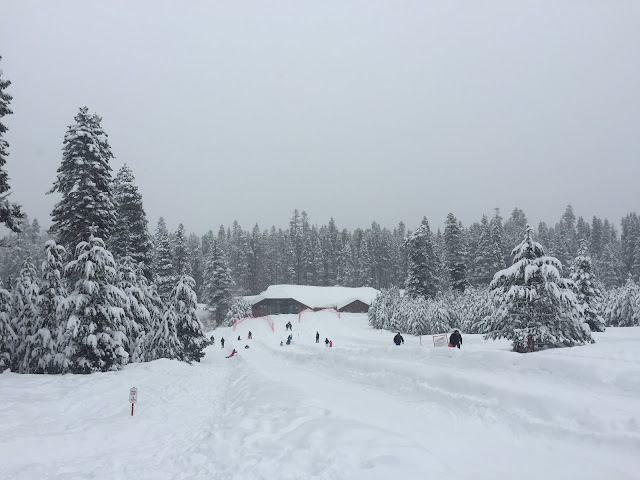 With a number of well groomed sledding tracks, we bundled up, rented a sled then headed outside to have a go down the hill. 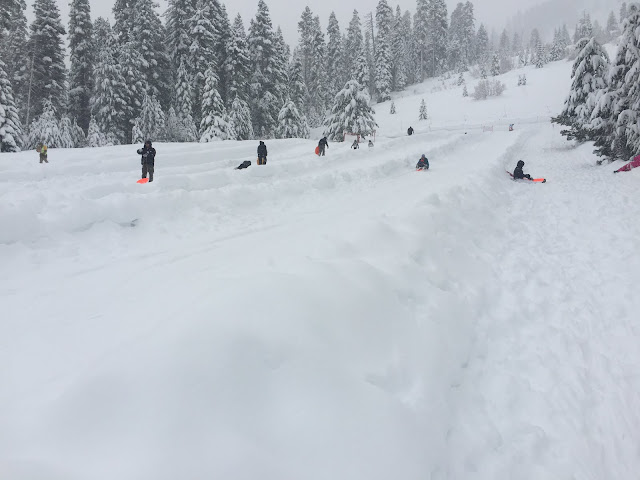 It was scary how fast you could start speeding down the hills. I couldn't convince my Mom to give it a try, especially after she read the sign stating sledding was dangerous and could result in death. The hardest part was getting up to the top of the hills. It was quite the little workout, but the scenery was STUNNING!!! They had snowshoe paths they had cleared among the giant evergreens. This is where we should have rented our snowshoes! Somehow the snow was even more here. The cleared path created about 8 ft. tall walls on the side of the road. 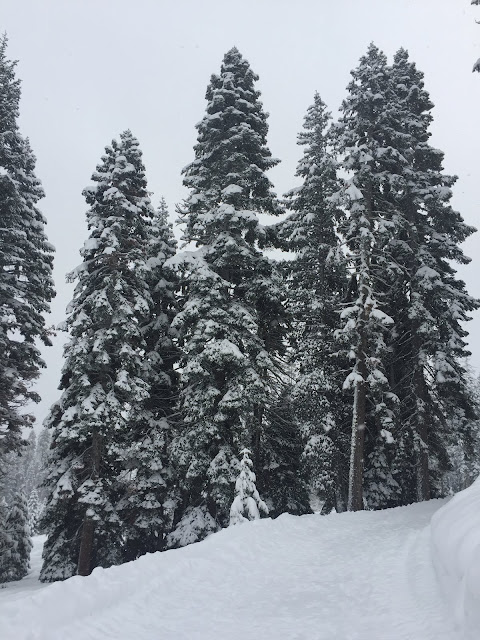 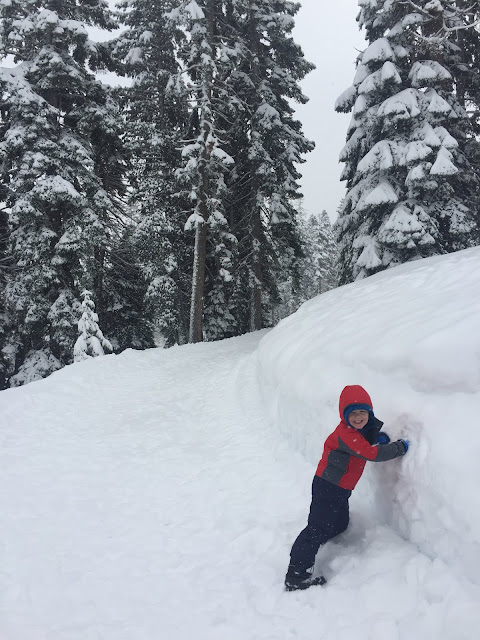 I used to be a beach person, then I discovered the mountains, and changed a bit. But it wasn't until I saw the snow covered, really covered, mountains that I truly fell in love. It reminds me of Narnia with these massive trees all heavy with snow and their limbs struggling under the weight. 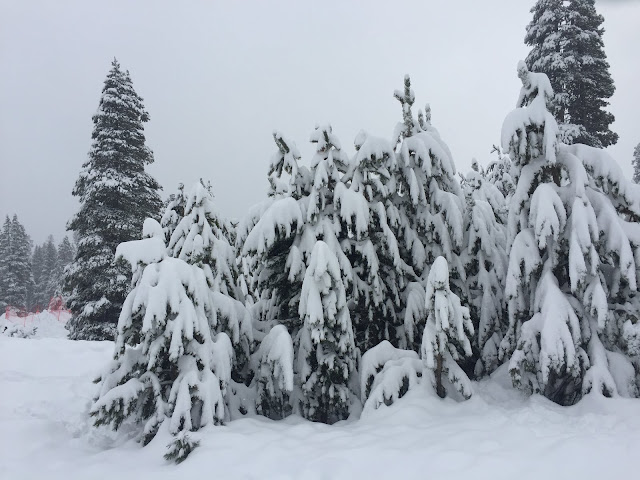 I just couldn't believe how the snow stacked itself on the limbs of these trees. Parts of me wanted to go shake it all off and part of me just wanted to sit and look at it all day. 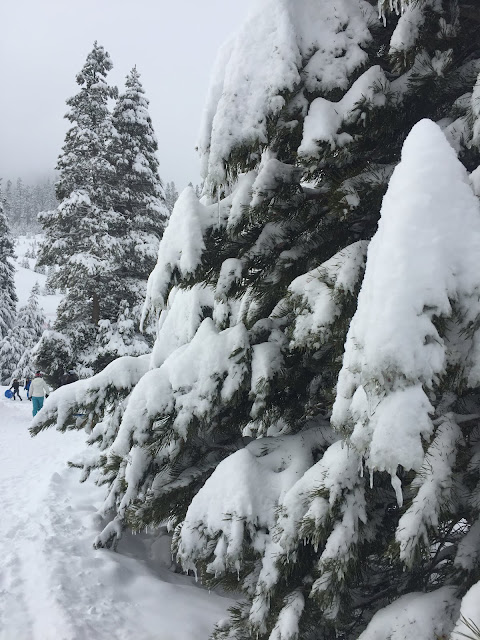 After a few times down the slopes, Landon was done. The snow was being flung all into face as we went down the hill and he just didn't enjoy it. You'll see what I mean if you watch the video at the end of Adam going down. We were bundled up good, but snow was still being flung all in our faces and getting down into our clothes. Overall, I think the adventure park might have been suited for kids a little older, say 7 or 8. We saw plenty of them having a blast and running back up again and again. Once Landon was done, he just wanted to play in the powder and make snowballs. The snow never stopped falling, but he didn't seem to mind. 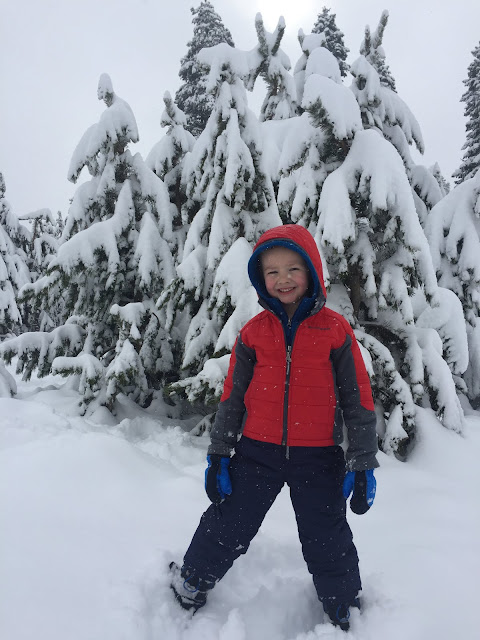 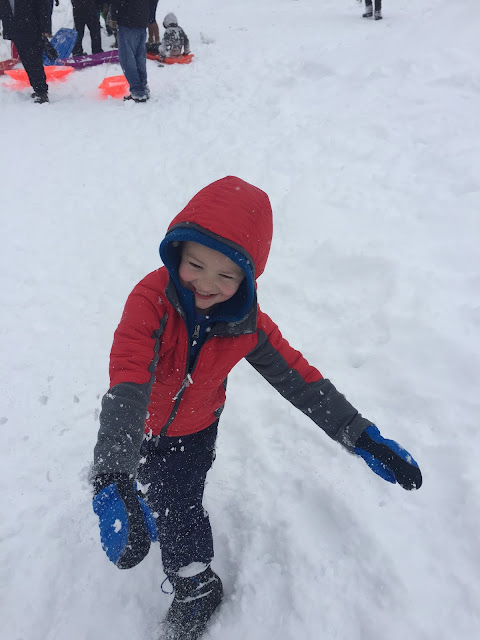 At this point, my Mom and Jack came out and my Mom suddenly seemed to realize just how stunning of a setting we were in. 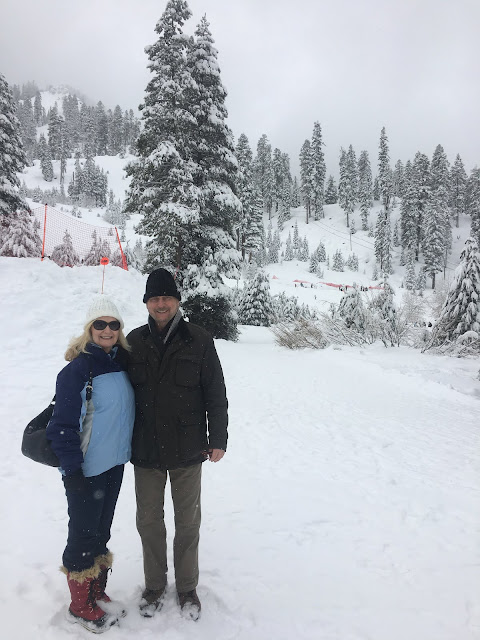 I still couldn't convince her to go down the hill, but she did convince me to do a snow angel. Falling back in the deep fresh powder was easy, getting up was a little harder. 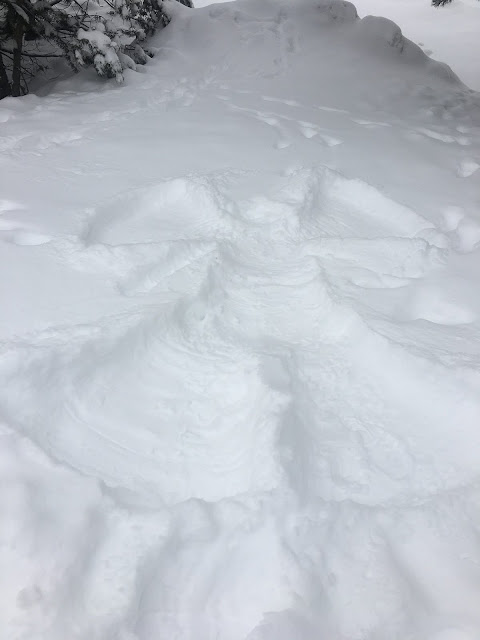 We had planned on taking them to the Emerald Bay overlook on the way home, but the clouds were heavy, low, and there was too much overcast. We knew it wouldn't be worth the stop so we headed back down the mountain toward home saying goodbye to the snow, Lake Tahoe and these beautiful tress. 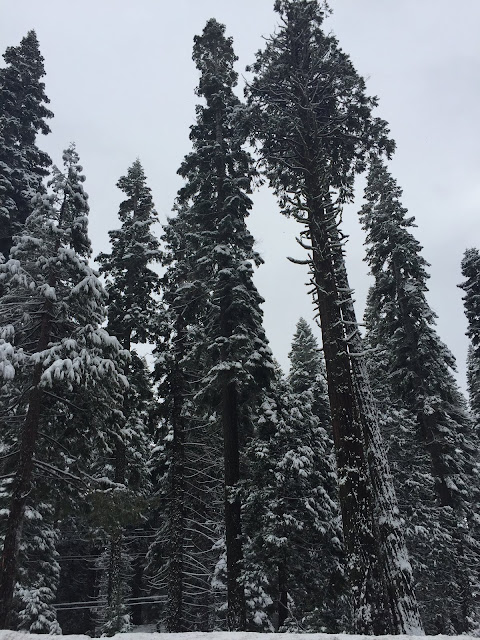 As we continued driving the snow lessened, stopped, faded completely and soon we were back in the warm weather. It was a short trip and the weather never gave us bright sunshine to enjoy the color of the lake, but we still had a lot of fun. We got to experience some new things and the scenery was still spectacular. Some of the most spectacular sights, we didn't even see until we got home and watched some of the drone footage. It's pretty fun to get an eagle eye view of this place. I hope one day, we get go back and enjoy it even more. Until then, we will always have these wonderful memories.