January is always a transitional month for us. The holidays are over so the hustle and bustle calms down quite a bit. At the same time, Adam starts busy season which means he has to work more and sometimes works weekends and none of us like that too much. On the flip side, January is also Landon's birthday month so there is still plenty of fun and excitement. And although the days are shorter this time of year, we do live in a mild climate so the weather can still be great. Of course, as I blogged about HERE we spent the first few days of the New Year in Yosemite equally enjoying the cold and snow. 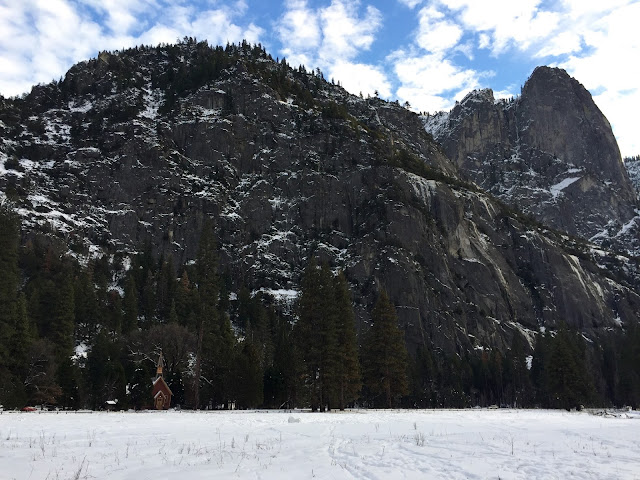 The scenery was amazing, but Adam and I had a blast cross country skiing while Landon took an all day ski lesson. I've seriously been dreaming about going cross country skiing again and I really cannot wait until I can go again. Landon must have loved skiing just as much because he's been drawing it ever since we got back. No joke... 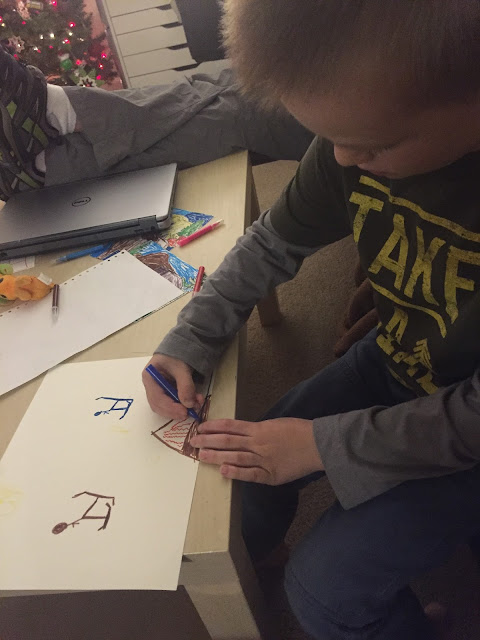 Despite dreaming of the winter wonderland, the mountains are not as close as we'd like so the following weekend we stayed close to home and spent a day on the coast. The great thing about living here is we can wake up on Sunday, see how we feel, look at how the weather is behaving, and choose from a myriad of activities. Being an El Nino year, we've gotten a lot of rain, but we've also had massive waves along the coast. With reports of big swells that weekend we decided  to venture down the coast to see for ourselves. We didn't have a  particular place in mind, we just hopped in the car and headed down Hwy 1 looking for a new beach we hadn't stopped at before. Shortly thereafter we found ourselves at Bean Hollow State Beach, mesmerized by the waves pounding the rocks. 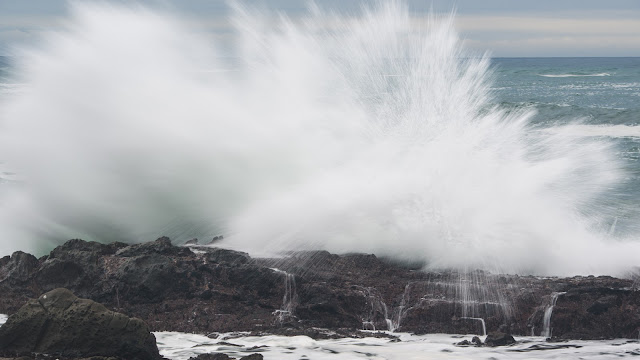 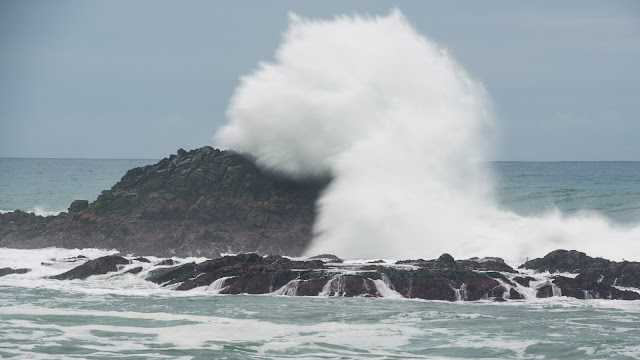 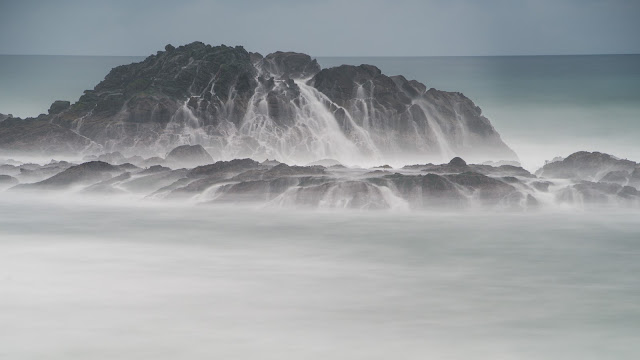 It was pretty spectacular to see, especially when the water is normally relatively calm. As Adam snapped pictures, Landon and I checked out the "beach". It wasn't a typical sandy beach and this is exactly why we drive down the coast time and time again. There is so much diversity just a few miles down the road from one place to the next. This particular beach was all rock and had the coolest formations. I wish we had a super time lapse of the Earth to see how these rocks have changed and been sculptured over thousands of years. 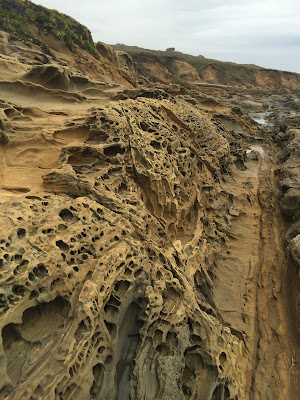 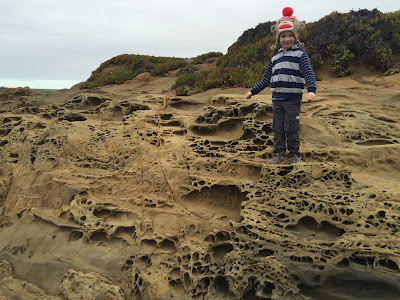 Then we headed down a bit more to the Pigeon Point Lighthouse. How you can you not love a lighthouse? This one doubles as a hostel and if kids were allowed, we'd totally book a night here. Sadly though, they are not so I'm not sure we will ever get a chance to stay here. 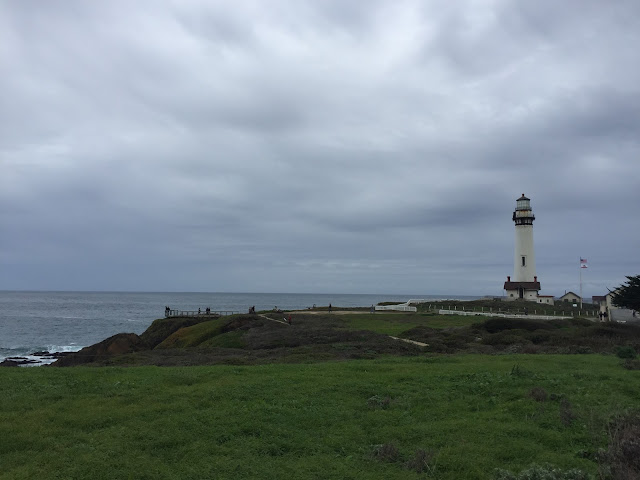 As we headed back to work for the week, it was business as usual. I did however FINALLY receive my brokerage license just over nine months after taking the test. They had a small receiving ceremony at the Custom House downtown. Friends and family were invited and despite being busy, Adam was working just a block away so he got to come see me receive my license from the port director. 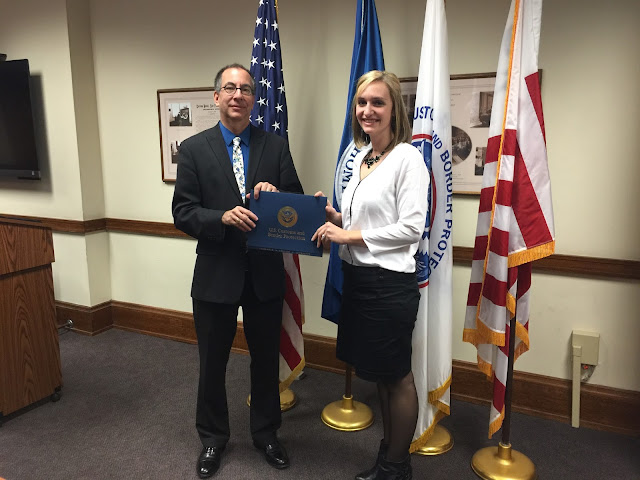 It feels good to finally be a professional even if this was never my dream job. Once I started to really apply myself, it became much more rewarding and this is just the final step in proving that I can work hard, do well, and enjoy my work.  A very wise man recently told me that getting your brokerage license is just like getting your drivers license. You have all the tools, but there is so much you have to learn. I'm learning that more and more everyday and being in management now is a huge change, but I enjoy the challenges and look forward to what more I can accomplish in the future.

Outside of work, we've been working on some fitness goals. Adam lost over 50 pounds last year, which is amazing! Now he's trying to get more fit and build muscle. I have just under 10 more pounds to lose to be at my goal, but would also like to get more fit. We have a deadline for the end of June for ourselves so we've trying to incorporate some exercise at home every night. Landon helps out either assisting or doing them himself. I picked him up at daycare last week and his teacher told me he was showing the other kids how to plank. He's been a great little motivator too telling me we should exercise to have more energy. One night, he helped hold down his Daddy's legs while Adam did sit-ups. It reminded me so much of being a little girl when my Dad was in the Army reserves and doing the exact same thing. I was probably about the same of age as Landon too and it brought me a lot of joy to see it duplicated with them. 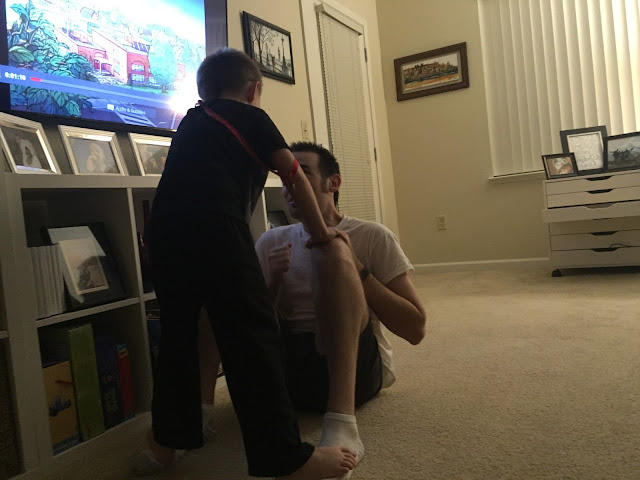 Maybe we can call it a weight loss gift, but Adam finally won me over to the idea and got a new toy, a drone. Although it was halfway through the month, he's done plenty of flying since he got it and even I cannot deny how cool it is. As soon as it came, he opened the box, charged it, and took it on its inaugural flight, in the house no less. 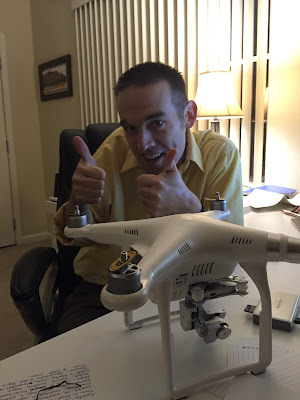 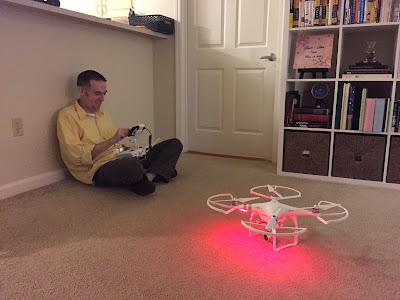 Once assured he could fly it, he quickly took it outside our complex and flew it around a bit. It's pretty neat, but it also scares to me to watch it fly so far away or so high up. It's best if I occupy myself while he flies it and just enjoy the videos afterward. That first weekend, it rained almost the entire time. Anytime it was remotely sunny, we were out trying to take it for a spin. We first tried the devil's slide, a great spot along the coast, but almost as soon as we pulled up it started misting. A little later that weekend, there was a break in the rain so we took it down the road to Lake Merced and flew it there. While Daddy flew, Landon rode his scooter, and I ran a bit. It's so funny to hear this little copter buzzing around everywhere. The birds don't like it one bit either, I wonder what they think it is. 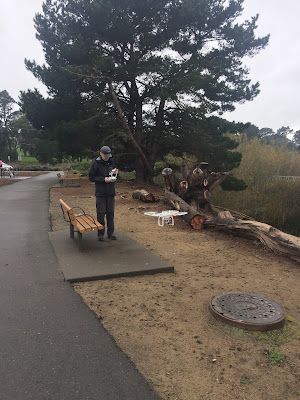 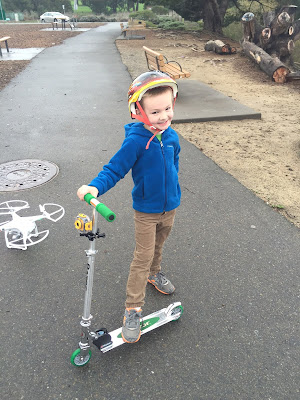 After his first two flights, the real work began...editing the footage. Adam made his first video and it turned out pretty good for a first try and just messing around at the lake.

The next weekend though, it was time to step up the game and with clear blue skies, we hopped into the car and headed up the coast. Hwy 1 from LA to San Francisco is the most famous part, but we think the scenery you see North from San Francisco is even more amazing. As we drove toward our destination of Bowling Ball beach, we stopped along the way so Adam could shoot some more footage. As scary as it is seeing the drone up high in the sky, it doesn't even begin to compare seeing it out over the ocean. I literally have knots in my stomach watching him fly it, but the views it gets are spectacular and worth all the stomach ache. 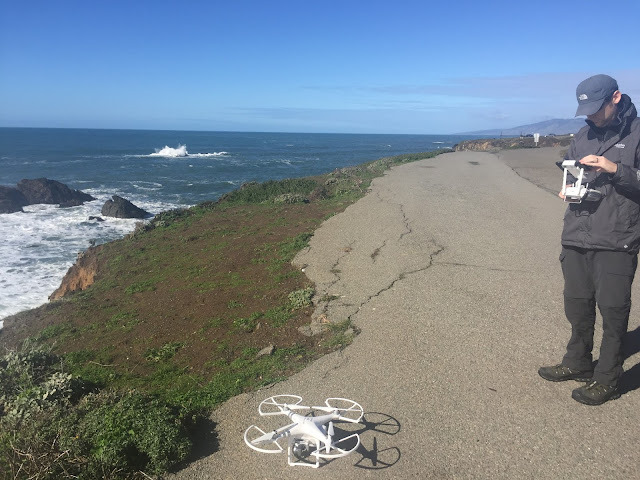 We made it to this somewhat hidden beach and took what we thought was the path down to the famous bowling ball rocks. Unfortunately, once on the beach we realized a few larger rocks stood in the way of getting our real destination. The rocks on this beach were so big, it was almost intimidating. 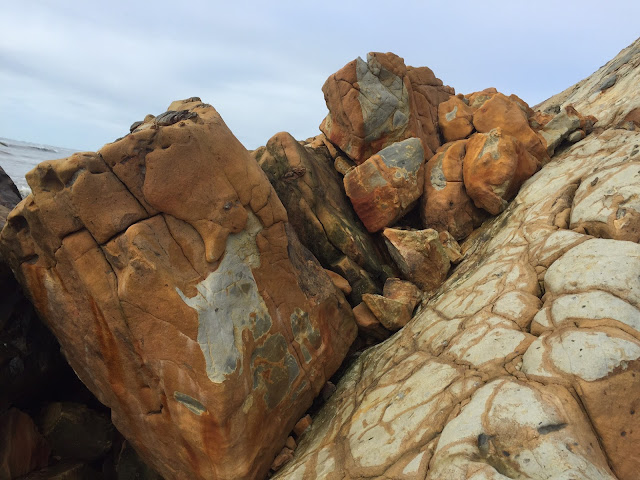 Feeling a little defeated, we decided to make the best of it. Landon donned his wetsuit, Adam pulled the drone out and we just enjoyed this secluded beach for a little bit. 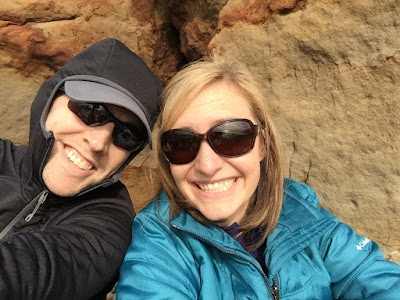 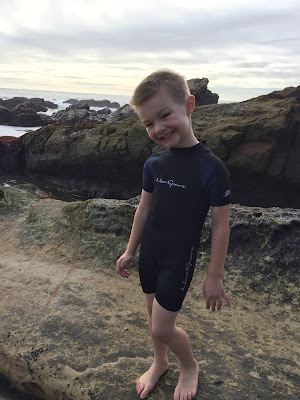 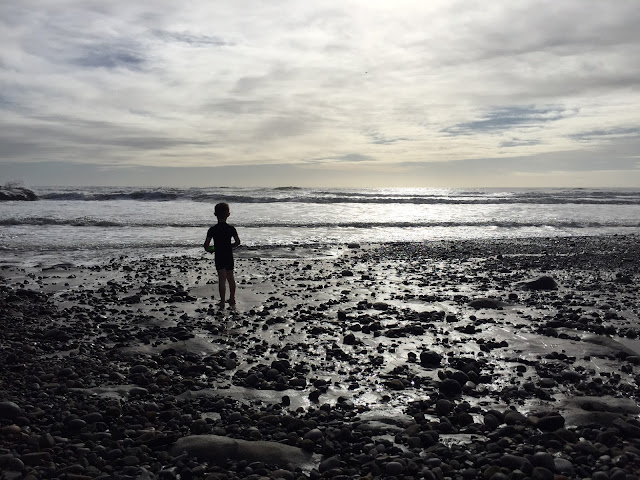 We later found out we had take then wrong the path down and so we plan on going back again soon for the elusive bowling balls. It was still a wonderful day and by the end of it, Adam had produced another video. This time, the drone was able to capture footage and things we couldn't see from the beaches. It's a shame how many places around us don't allow drones. There are all kinds of great places he will never be able to fly, but that doesn't mean there are not plenty more amazing places he can. This is only the beginning.

As we rolled into the last week of the month, my Mom and her boyfriend flew in to spend a week with us and help celebrate Landon's birthday! 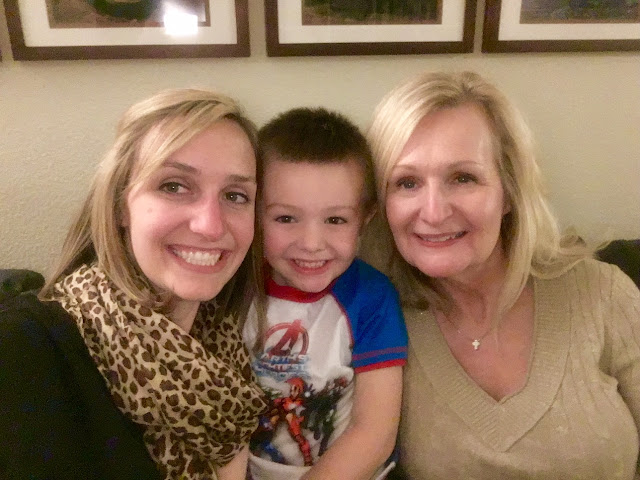 Friday, January 29th was Landon's 5th birthday. I thought I would include it in this month's review, but there are too many pictures and things to share so I'll make a separate post instead. We celebrated Friday with a trip to a bounce house then a long drive to Lake Tahoe for the weekend. We continued our festivities with snow shoeing, bowling, and playing in all the snow Tahoe had to offer. Although it was overcast the entire time, it was even more beautiful than I thought it would be. Landon loves the snow so much and had a blast playing in the deepest snow we had ever seen.  Sometimes it is hard to believe that Landon is five, but then I look at him and see what a wonderful little man he is becoming and I can't help, but be excited about seeing what the next 5 years will be like. 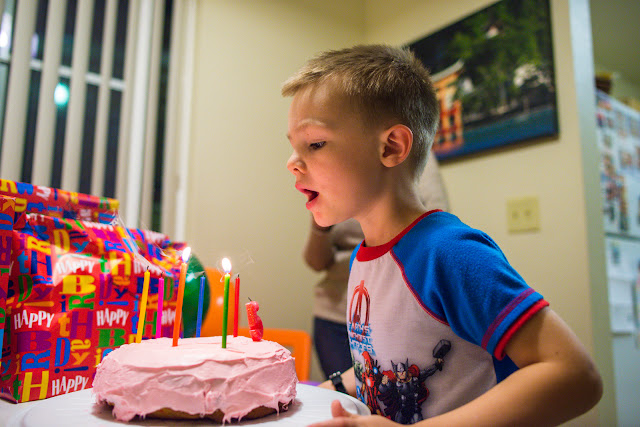 In our house, January is always special. More about his birthday coming later this week!

If you want to see a few more pictures from Bean Hollow, check out Adam's pictures HERE!