February has come and gone so it's time to look back on the highlights from the month.

This year, Super Bowl was held nearby in Santa Clara. In celebration, San Francisco turned into "Super Bowl City" holding a lot of events, free concerts, and fireworks. Not being sports fans, it wasn't a big deal for us, but we did want to enjoy one of the fireworks shows so we headed over to Treasure Island to watch them over the city. We arrived early and hiked up to a area near the Bay Bridge hoping to get a good vantage point. Despite out best efforts, trees blocked our view at every turn and even though we had a good view of the bridge, we couldn't much see the city through the trees. 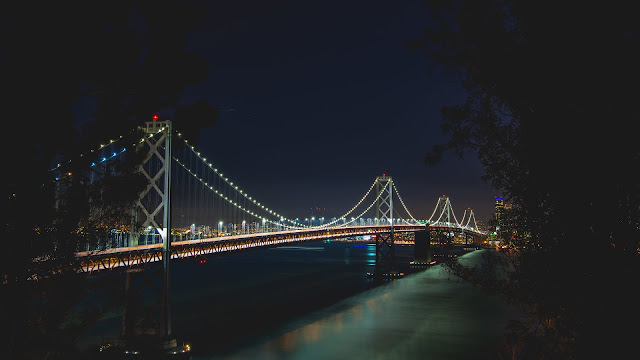 We made our way back down to the water's edge with a perfect view of the city skyline. Oh how I love this city! It was especially pretty all decorated as Super Bowl City. The "gem" on top of the Transamerica pyramid was lit which is usually only on during Christmas. They also changed the colors on the building to represent both teams. 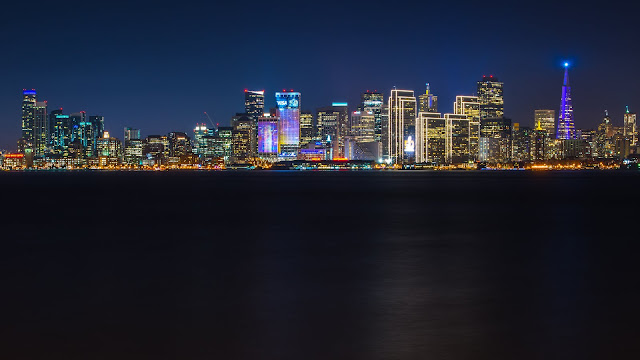 We I thought the fireworks started at 8pm, but they didn't start until 10pm. Oops. Still, it was worth the extra wait and we ended up right outside a Maroon 5 concert so we got to listen to the whole show for free. 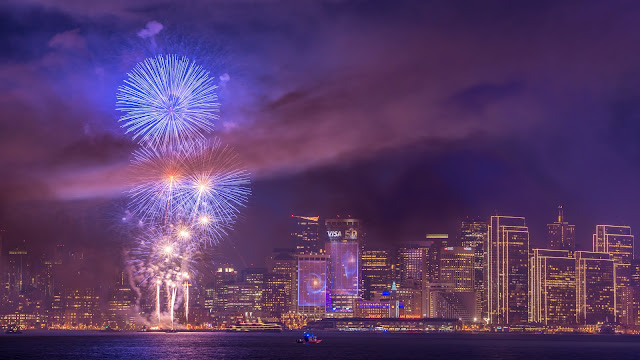 On Superbowl Sunday we were hoping the rest of the city would be at the game in Santa Clara, downtown watching on the mega screens, or at a Superbowl party so we headed to Golden Gate Park where we finally made it to the Japanese Tea Garden and toured a very familiar scene. 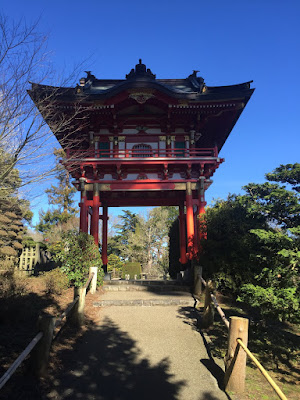 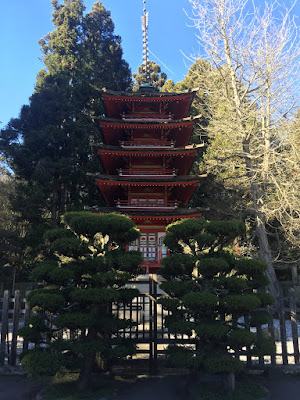 It brought back a lot of memories for Adam and I of our trip to Japan in 2007. Despite having seen many of the original shrines and larger gardens that this was one was modeled after, it was impressive to see how well constructed this garden was. Plus it was fun showing it all to Landon for the first time and teaching him a little bit of Japanese culture. 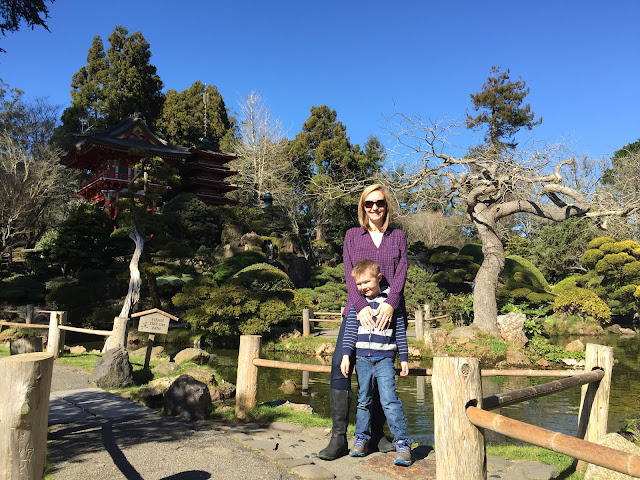 He especially loved the huge ponds with Koi. I loved seeing all the flowers starting to bloom. Spring really starts showing in February here. Golden Gate Park is one of the best places to see all the flowers in bloom. 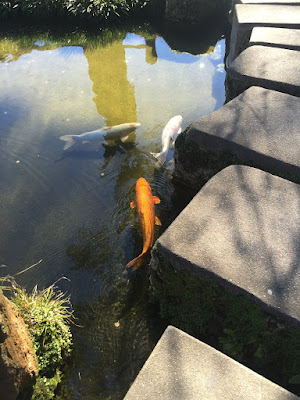 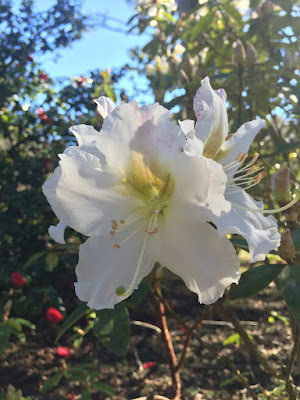 After our stroll in the gardens, we walked over the California Academy of Sciences which was having a free day. Free days at the local museums mean big crowds, but we were again hoping that with the Super Bowl, it wouldn't be as bad. The fact that normal admission would have cost this family of three $95 meant we were willing to at least try it. 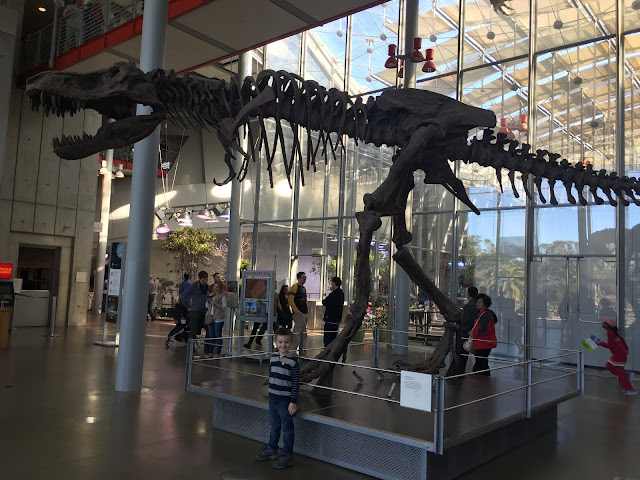 We seemed to be somewhat correct. The crowds were not all that bad. There were a couple places with lines, like the Earthquake simulator, and after overhearing it was going to take well over an hour to get through the line, we decided we were fine not knowing what the earthquake of 1989 felt like. The academy of sciences is a planetarium, aquarium, and natural history museum. A lot of it was too advanced for Landon and didn't keep his attention, but we all loved the aquarium aspects. From the touch pools to the massive saltwater tank we could have spent all day admiring the sea life. One of my life goals is to have my own saltwater aquarium. It is mesmerizing and beautiful! 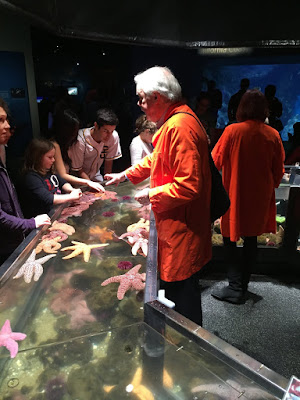 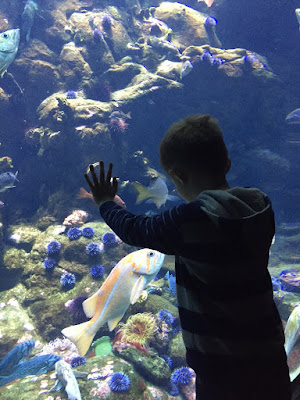 It was a pretty neat place, but I'm sooooo glad we went on a free day. I know we missed out on a few exhibits, but overall I don't know if at his age we would have gotten our money's worth on a paying day.

The following weekend, we found ourselves back at Treasure Island looking to enjoy another beautiful February day. Adam wanted to fly the drone in the area and hoped to capture a pretty sunset over the city. First, we went back up to the overlook near the bay bridge for him to fly for a bit. I still don't have any footage, but here's a shot he captured over the bridge which we could have never otherwise gotten. 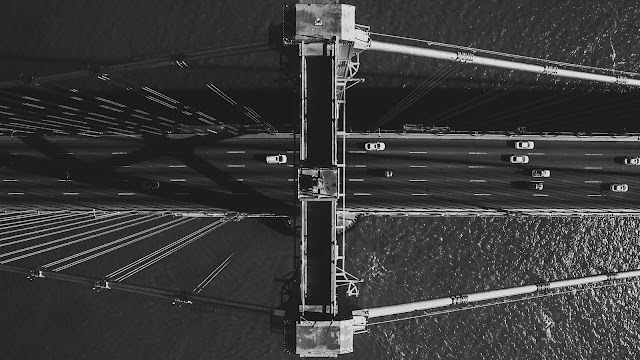 We happened to come across a high school regatta meet or competition. It was pretty neat to watch these tiny little two person sailboats fly around the bay. Not having such a thing where we grew up, we had to guess exactly what they were doing. They seemed to be racing in some sort of course. I'm pretty sure if we had such a thing in Oldham County I would have signed up. It looked pretty fun and anything on the water has my seal of approval. At least one always seemed on the verge of tipping over which didn't seem to excite the parents, but sure kept us on our toes. 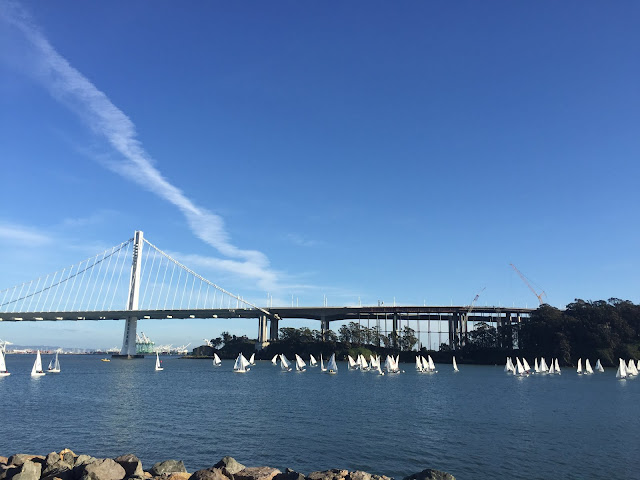 Landon rode around on his scooter for a bit and we cruised the sidewalk overlooking the city. We saw a proposal, it was super cute! The guy couldn't have asked for a better San Francisco day and picked a pretty good little spot to pop the question. Speaking of love,  it was a great day with my two loves. 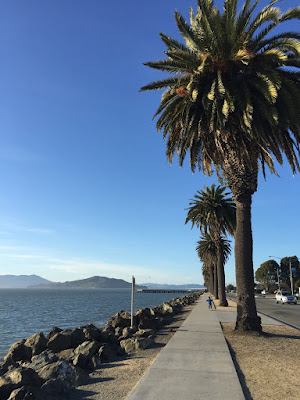 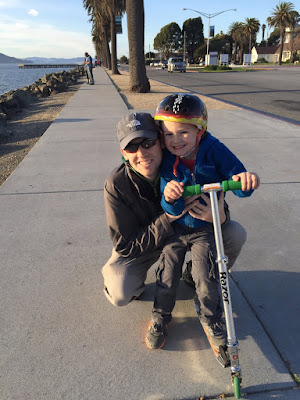 As the sunset. Adam snapped a few pictures. 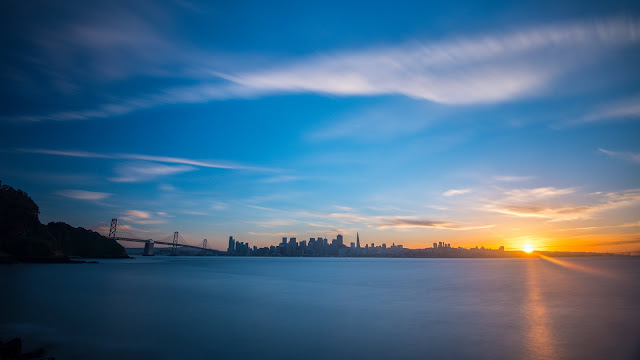 He even got the drone back out to capture a few from above. 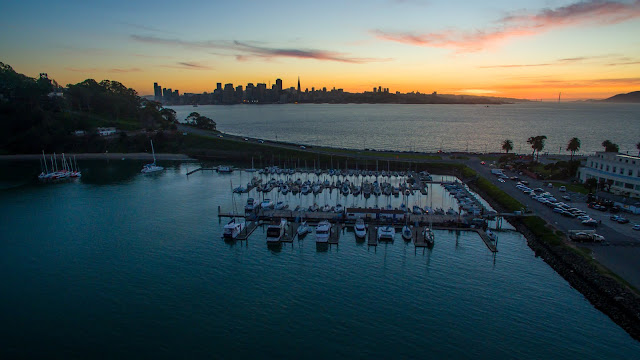 Have I mentioned lately how much I love this skyline? 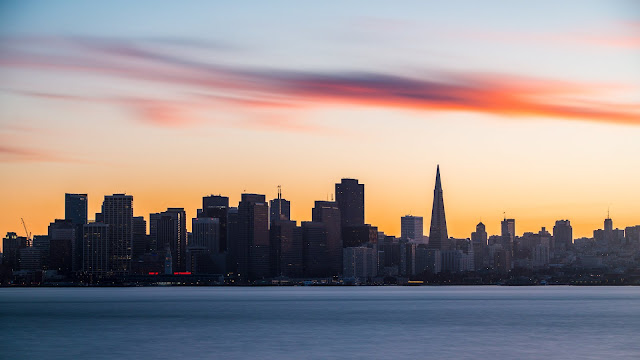 We've sure seen our fair share of epic sunsets in February. Most seem to happen during the work week when we don't have the opportunity to get out to really enjoy it. Adam happened to notice the sky lighting up one night and got home just in time to fly the drone out from our place. Imagine what our neighbors think as he flies a drone from our 3rd story apartment balcony. 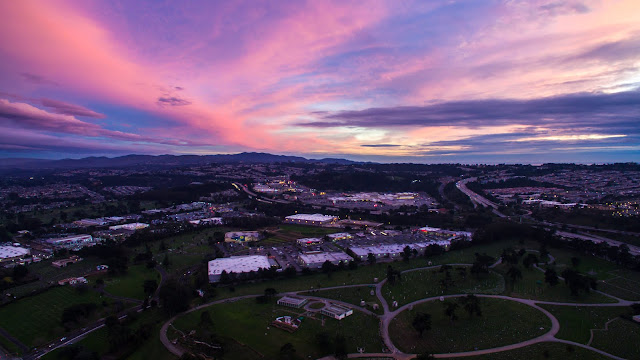 And another night that I caught as I walked through the breezeway on my way home. Gotta love those Palm Trees. 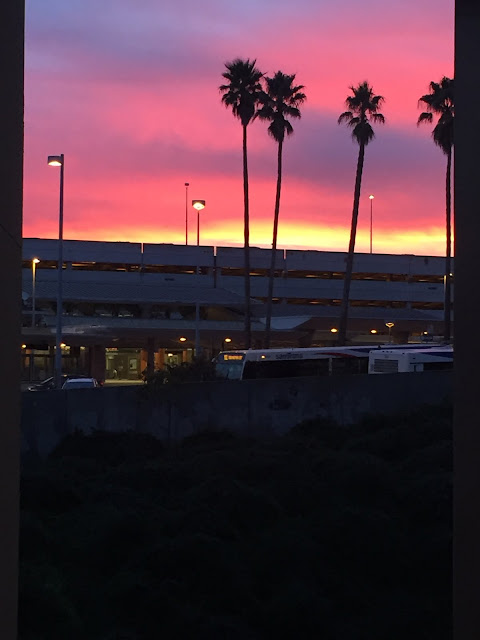 Despite these epic Sunsets, February has also brought plenty of rain. It's been great for the drought and the snow pack in the mountains, but has hampered a few of our weekend plans. Landon's enjoyed staying  home a bit more though and has taken to his new favorite hobby of coloring...all day long... 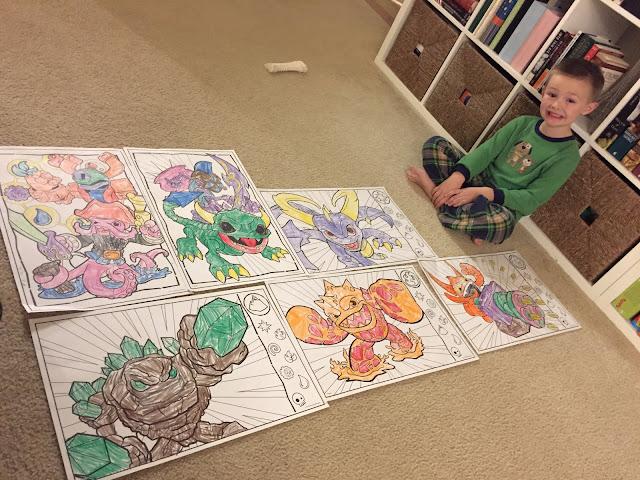 And NO I am not complaining one bit, because quiet activities are the best activities especially when you have a little boy. And the massive coloring books are the absolute best as they keep him busy for hours. He's gotten pretty good and especially loves using ALL the colors even if it means rainbow squirrels. 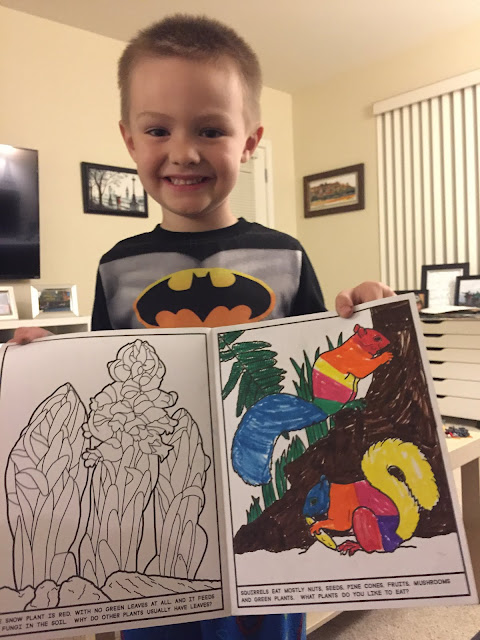 And while we lost some time to rain, we've also seen a lot less of Adam lately. It's full blown busy season and he's had to work almost every Saturday. Sometimes he works from home and sometimes he goes into the office, either way it's been keeping him busy. Sometimes too busy it seems. 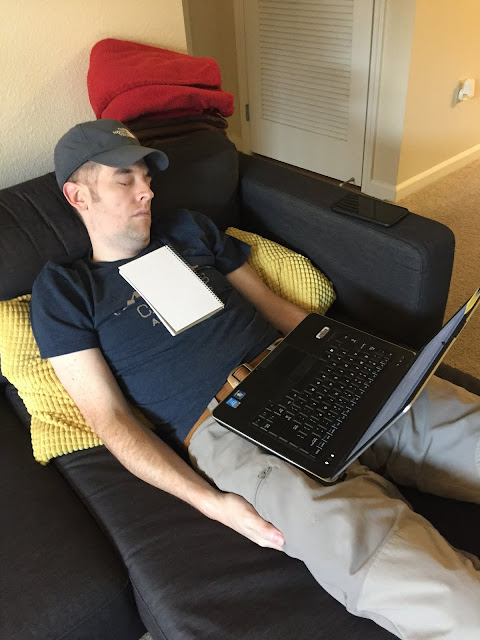 Even though Adam was working, we lucked out the last weekend of the month and had beautiful weather. With no plans, Landon and I hopped onto BART and headed downtown to see what sort of trouble we could get into. We made our way to his favorite playground at the Embarcadero center. 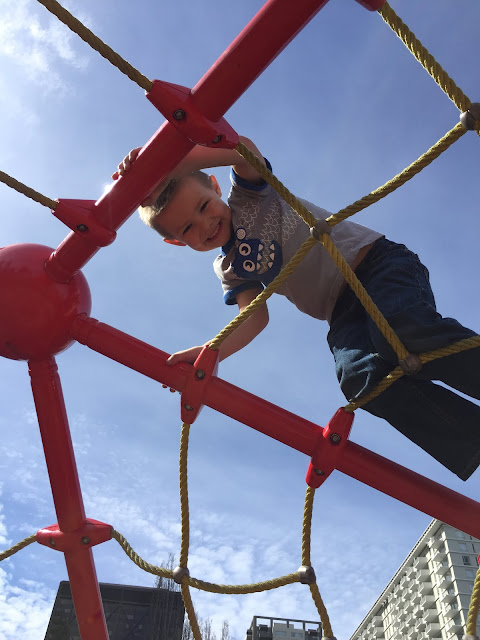 He played for almost two hours while I got in some good book reading time in the sunshine. Thankfully, he eventually had to pee so we left the playground and took the Muni down to Fisherman's Wharf. We braved the crowds to have a burger at Wipeout Bar and Grill. We sat outside, Landon got in some coloring and we got to listen to a great little music group playing to the tourists. 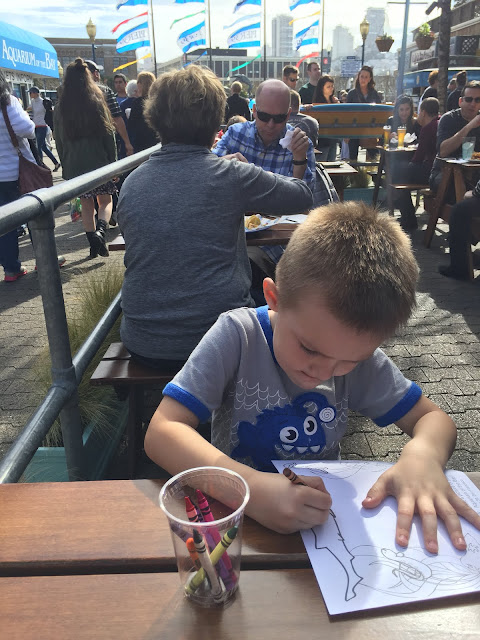 When we were done with lunch we walked down the waterfront, goofed around and people-watched for a bit before finally settling on some ice cream. 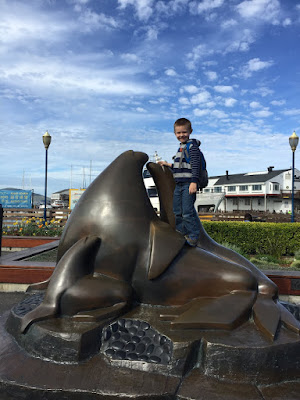 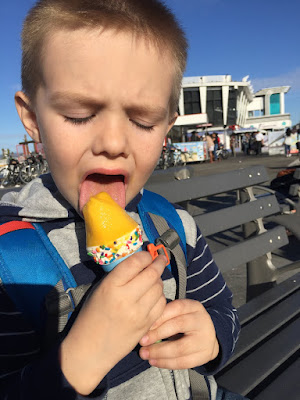 We decided to walk back from Ghiradelli to BART then head home and spend the evening with Adam. Once it was all said and done, we had walked over 6 miles which I found surprising since it was just a leisurely day along the waterfront. It just goes to show, getting out even with no plans is good for you.  Sometimes the best days are the unplanned ones. February lacked any real plans, but still managed to be enjoyable. Once we have Adam back full-time and the weather starts cooperating a little more, we will be happy we had some down time when we did.