Snow Play in the Mountains

We've been living in Washington for four months now. During that time, we've enjoyed a spectacular summer of long days, perfect nights, and great weather. There's no denying that we picked the perfect time to move to Washington state. This summer completely charmed us and I love it here. Now, we begin to prepare for the other side of the coin with short, cloudy, and rainy days not far on the horizon. I'm a little worried about how bad it will actually be this winter and everyone has different opinions. It comes down to the fact that we are just going to have to experience it ourselves. The upside of wet weather down at sea level is snow on the mountains. We were lucky enough to live in California last year during an El Nino year when the Sierra Nevada's received a good amount of snow. We took a long winter weekend in Yosemite and another in Tahoe and they really just reaffirmed to us how we needed more snowy mountains in our life. After the Northwest Mega Storm 2016 (i.e. nothing storm), we could see the mountains were snow capped. So this weekend, we decided to check it out.

We picked out a hike just outside of North Cascades National Park that would allow us to take Kaiser as well. We knew Landon would love the opportunity to play in the snow but we knew Kaiser would love it even more. As we drove to our destination, we passed by Diablo Lake and stopped for a minute just to see it again. 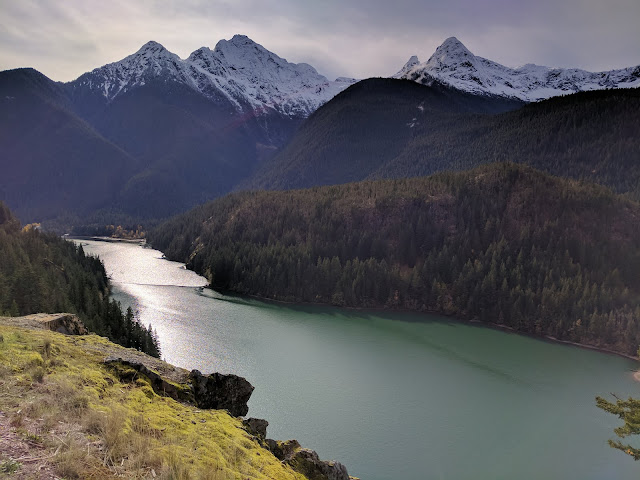 Our first time in the North Cascades, we had only made it this far so the rest of the drive was uncharted territory for us. We got to our hiking place and realized the snow was at least two feet deep and we just weren't prepared for 4.5 miles in that amount of snow. Instead, we drove over a little bit further down the road to Washington Pass and decided to just let the boys play for a bit. 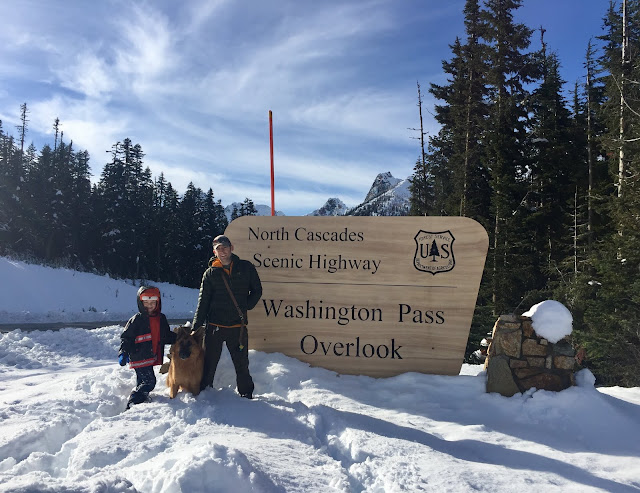 The snow was pretty deep and, as expected, they had a ball. Kaiser hopped out of the car and immediately started rolling around and eating snow. Landon was all about making snowballs. 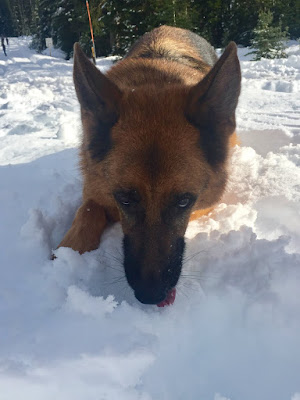 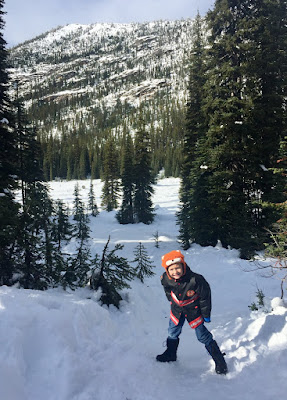 We found a big meadow and made our way into untouched snow. Needless to say, it was pretty deep. 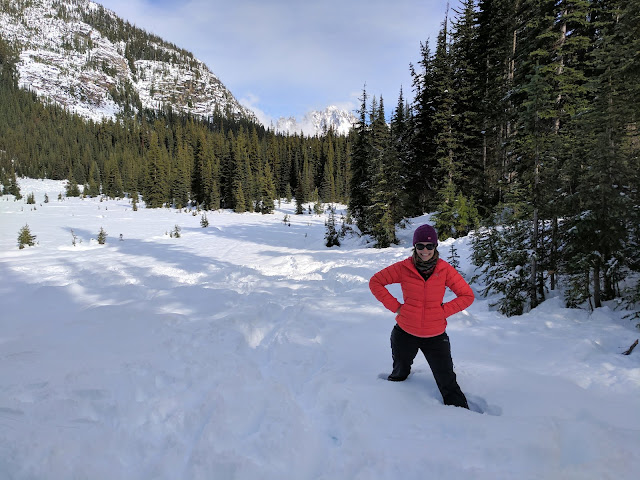 It was a beautiful spot though and we had it all to ourselves. 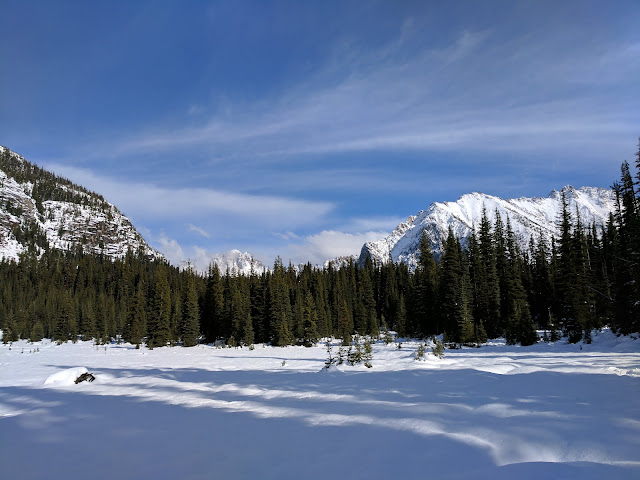 We all had quite a time trying to walk around in it. Poor Landon and Kaiser kept falling waist deep into the snow. One step and an entire leg would sink in. Often times, Landon would end up just rolling around in it. 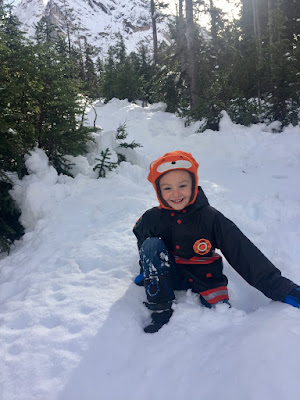 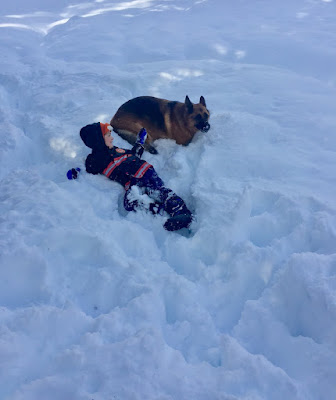 We tried to make our way out into the meadow, but it was just too deep and too soft. Poor Kaiser may have gotten in over his head at that point. I took this little video just at the perfect time.

Once back in the manageable area, Kaiser just continued to roll around and eat snow. Even though he got stuck, he was happy as could be. 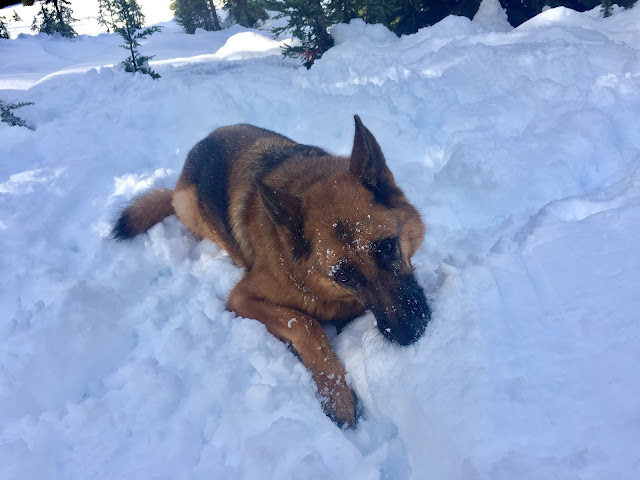 They also found a ramp of sorts going down into the meadow and continued to run up and down jumping in the snow when they got to the bottom. 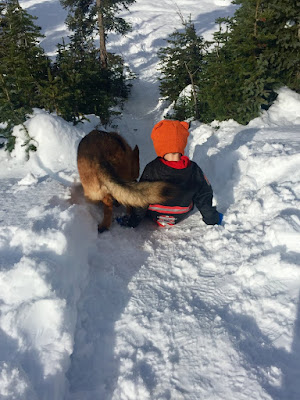 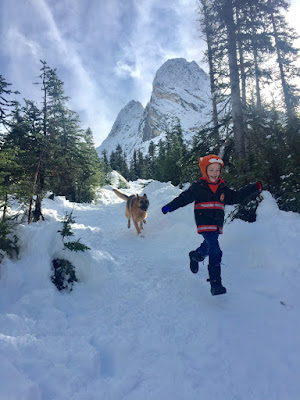 Despite our lack of enthusiasm, Adam and I were just as excited to see so much white stuff. Two happy Washingtonians right here. 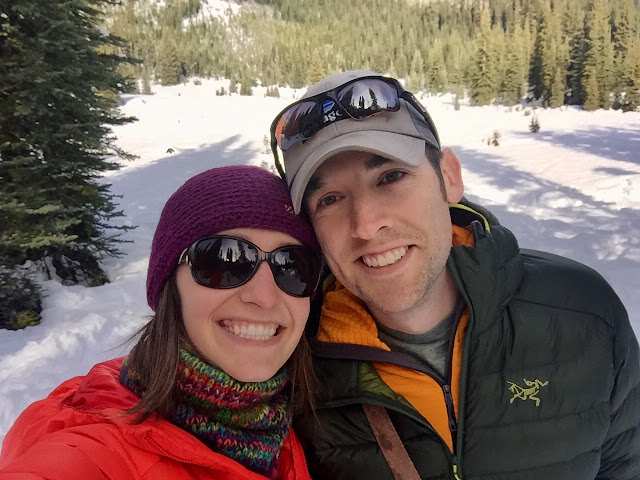 And the children just continued running up down the hill with sheer delight. 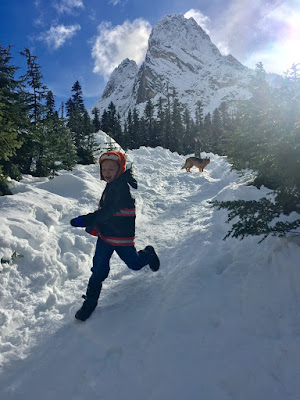 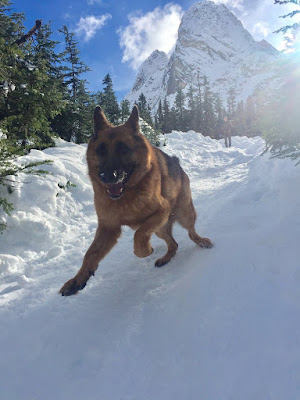 Of course, they didn't care, but the setting was absolutely stunning. We were surrounded by stunning mountain peaks, tall pines, and beautiful blue skies. There was a time that I thought you had to go Europe to see places as beautiful as this. Now, the American Alps are right in our own backyard. 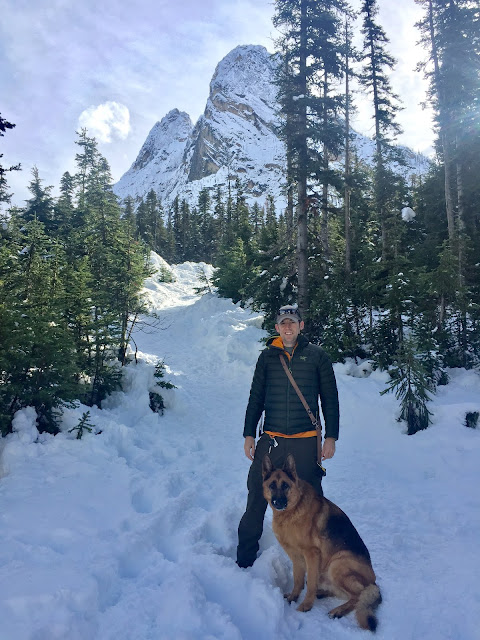 We started to take a walk to an overlook but realized Landon's jeans were soaking wet and he'd probably become miserable as we walked. Needless to say, the boy got a pair of snow pants on Sunday. Despite not being able to hike at all, it was still a great time. 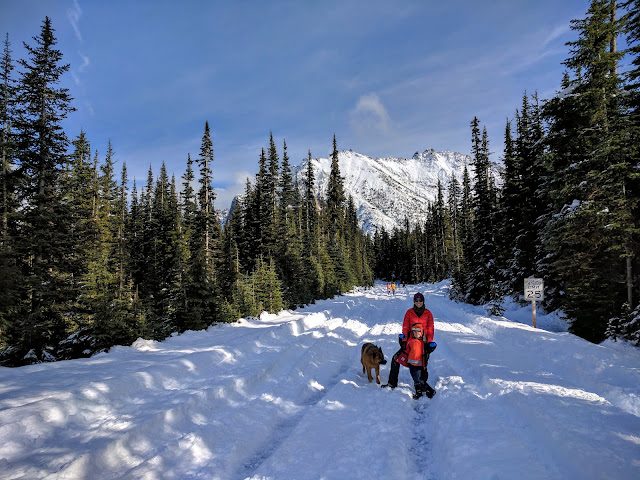 We got back to the car, changed Landon's clothes, and ate some lunch just sitting on the side of the road. 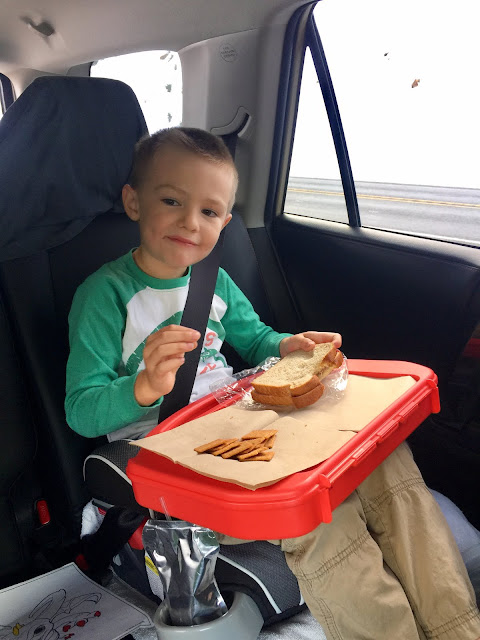 Sounds kind of boring and it would be except this was our view out of our car window. Needless to say, I could have sat there all day. 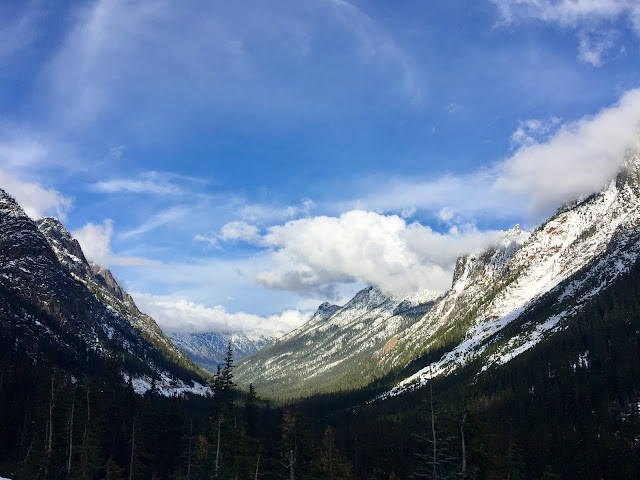 And just on the other side of the road was a mountain of rocks towering way above us. 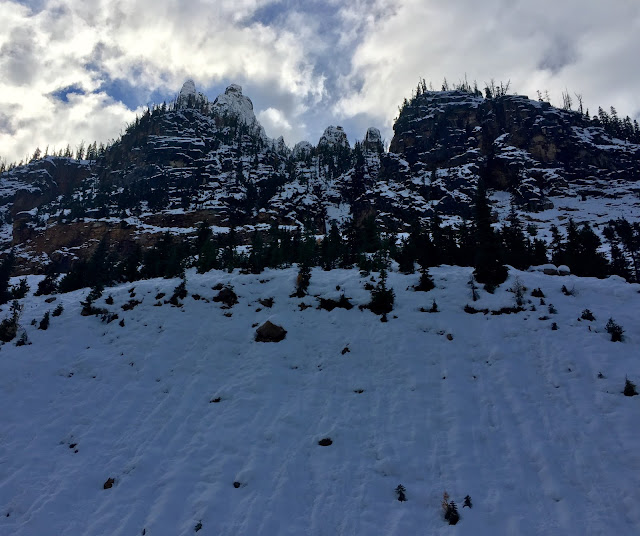 Adam took some pictures because we can't go somewhere and not get a few pictures. 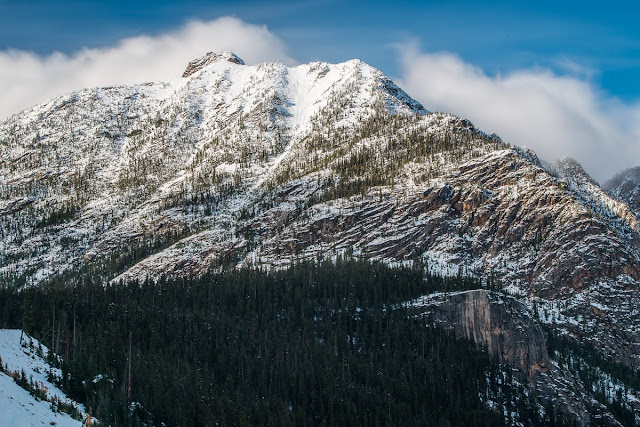 There's a few more HERE on his photo page. Then it was back on the road for the three-hour drive home. Six hours in the car for just a little bit of fun in snow may not sound like a worthwhile trip, but it was. And it doesn't hurt that a few hours of the drive included stunning views like cascading waterfalls from the tops of mountains all the way into valleys. 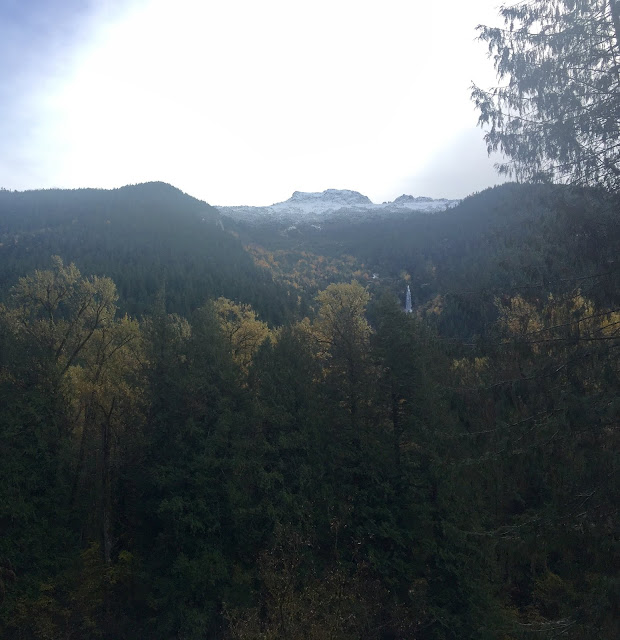 As I said earlier, Sunday we went looking for some snow gear. We checked out a local sporting goods store with new and used gear. They had a great selection of kids stuff and we walked out in the morning with some much-needed snow pants for Landon as well as a pair of snowshoes. After getting home and doing some research on adult snowshoes, we went back just before closing for a pair for me. Now all that's left is for Adam to find himself a good pair and we will back in the mountains and ready for some snowy hikes. These are our first pair of snowshoes and we are pretty excited to get back out and have some more fun this winter. 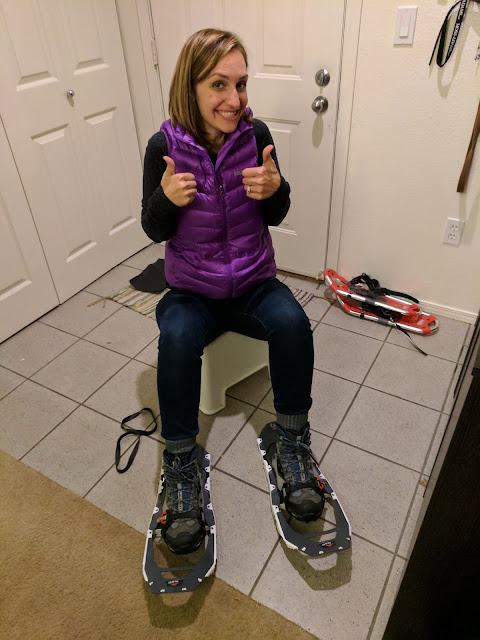