One my biggest concerns in moving to Seattle was the weather. All you ever hear about is how rainy Seattle is, how the sun never shines, and how everyone is depressed. I have to admit, it had me worried and admittedly I haven't made it through a full year yet, but so far IT IS AMAZING!!!! Yes, it rains, but isn't a lot of rain and rain, where we live, only means one thing...snow in the mountains! For us, there is nothing more glorious than big snowy mountains. A few weekends ago, the weather was looking bright and sunny for the weekend so we decided to head up to our favorite big snowy mountain, Mt. Rainier. 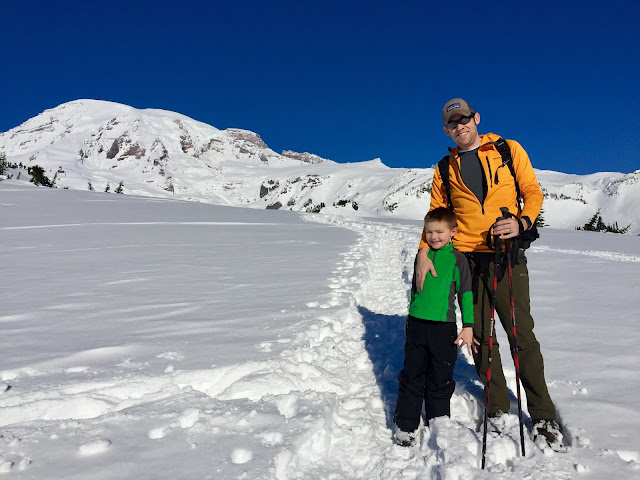 It was the most perfect day! Too perfect Adam would say, because there wasn't a cloud in the sky. That's particularly uncommon for this mountain especially this time of year. If fog and the Golden Gate Bridge is quintessential San Francisco, then clouds and Mt. Rainier is quintessential Seattle. Despite all the other mountains that surround us, there is just nothing like it. Although we had made our first snowshoe hike of the season to Rainier in November, we just had to visit it again to see it in all its white glory.

In the PNW, when they measure their snow in inches it climbs into the 100's. It currently sits at 90 inches near Paradise, the visitors center where we parked and started our hike. The wonderful thing about getting so much snowfall is that the hiking trails are either what you forge on your own or what you follow from earlier hikers. We left Paradise and headed in the direction of Rainier following the path of the other snowshoer's and skiers that morning. It's amazing how relatively close the summit of this 14,000+ foot giant seems from Paradise. 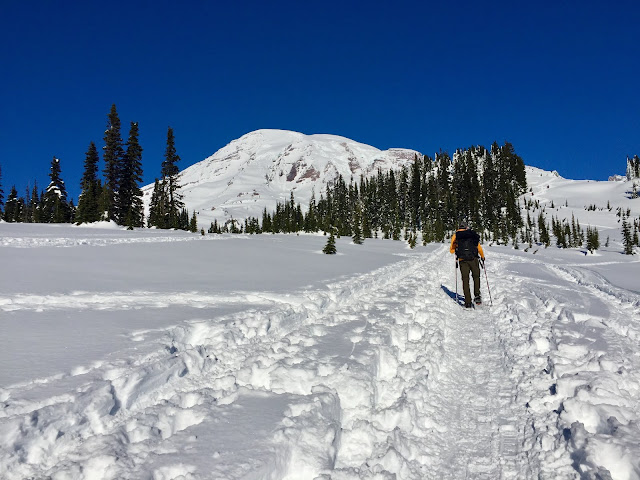 And as soon as you begin to make your way towards the mountain, the views become 360 degrees of snow, mountains and sheer beauty. 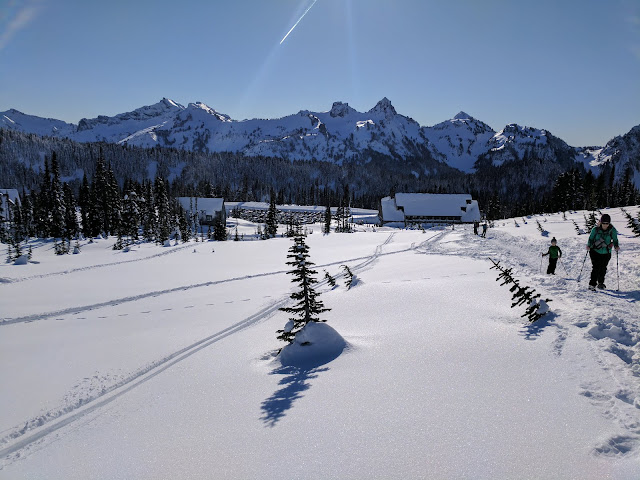 On this sun-shining morning, the temperatures were working their way into the 40's which starts to feel like real heat when you get climbing. Every step in the snow is twice as hard as it would be without it, but we just keep going up and up. 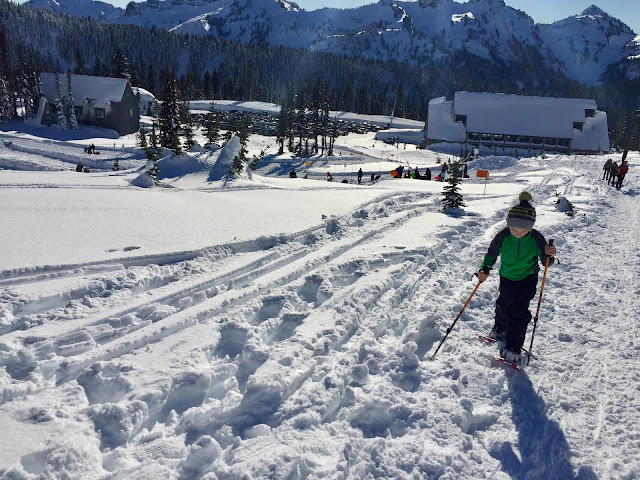 As we made our initial ascent, we rounded a bend and a huge valley at the base of the mountain came into view. We could see a few paths cut by early morning visitors skiing the otherwise untouched oasis. 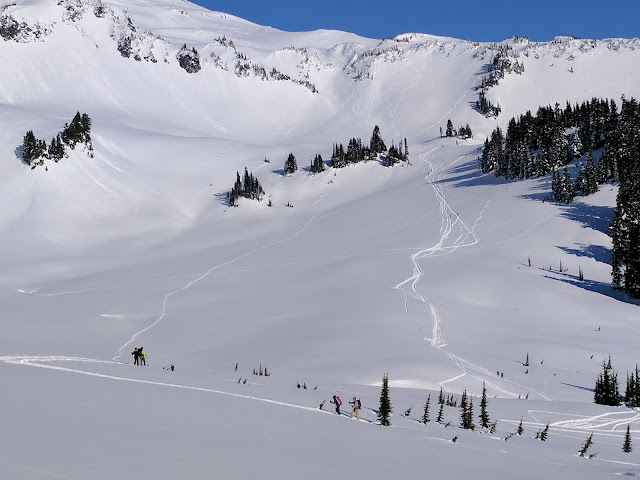 And of course, the views of the mountain from this point were not half bad either. 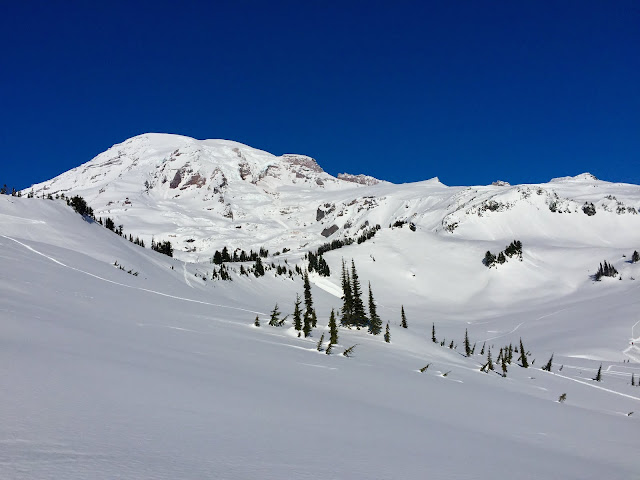 Adam decided we would hike to the top of the treeline, pictured on the left of the above picture. After some initial panic from Landon, we set out with smaller goals to achieve along the way. Once you start hiking toward the top of Rainier the mountain regains its formidable nature. It looks close, but step after step with little movement on the face quickly makes you realize otherwise. 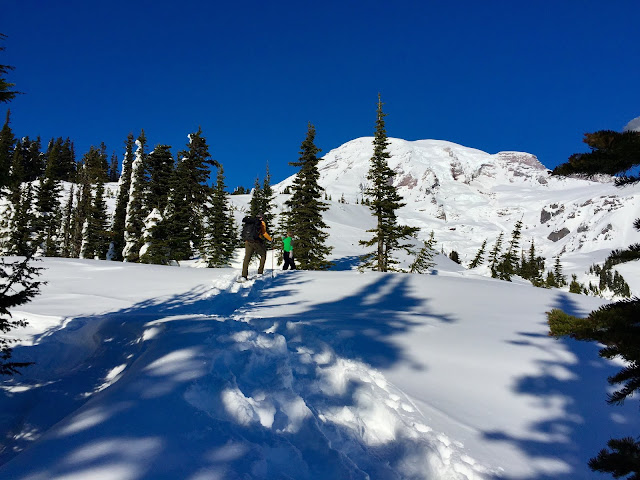 Little by little, we made our way up and up, watching the other little ants climbing along their paths as well. All signs of life were practically engulfed in the vast ocean of white that surrounded us. 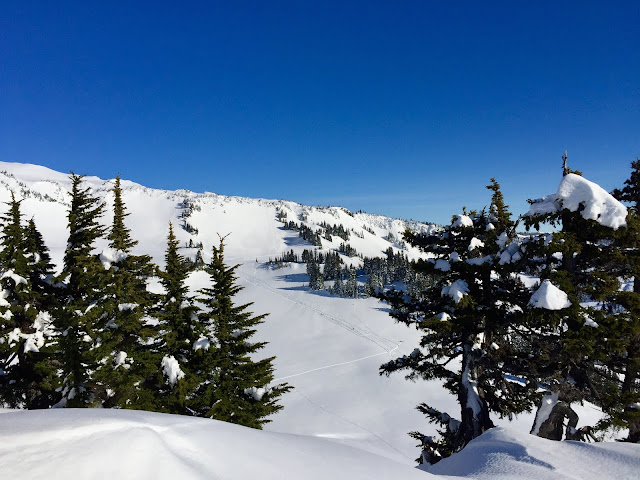 Landon was the leader for much of our hike and one point took us on these switchbacks up the ridgeline. It was probably the most harrowing snow experience of my life. Just a little too steep for my pleasure. 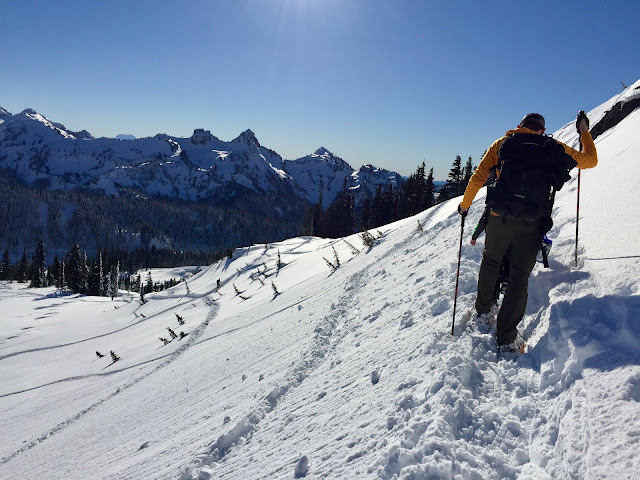 Walking on these steep ridge lines creates these mini avalanche snowballs that roll down the mountain as you pass by. We couldn't get enough of watching them roll their way down. Landon even learned if he jumped at the edge of the path he could create them himself and he found it quite entertaining. 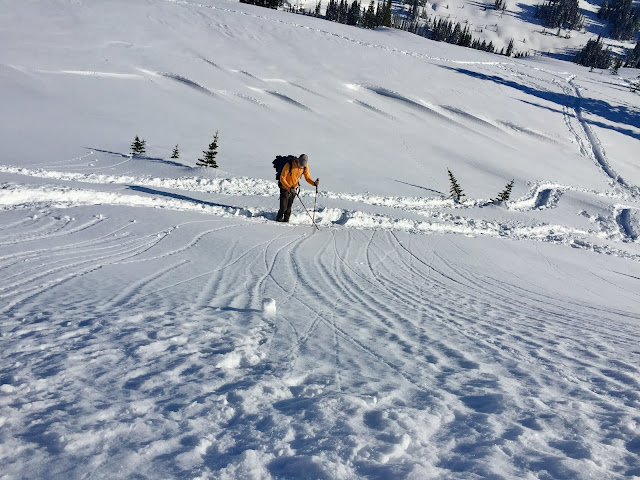 Of course, we went slow and steady and made it just fine. Once to the tree line we had aimed for, the views were the best reward. 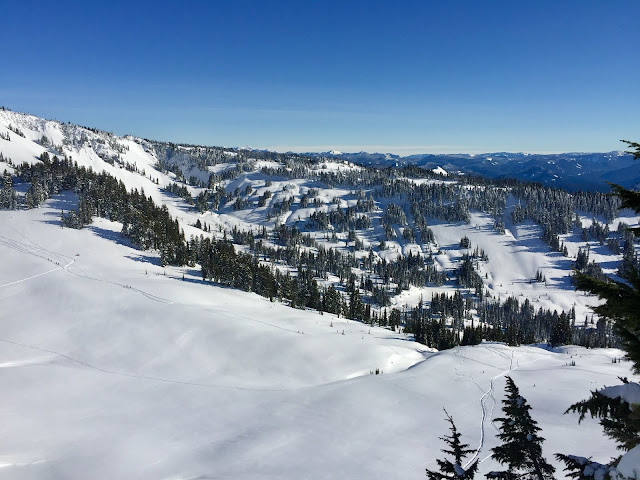 Well at least for some of us, others in the group may have found the trail mix with M&M's and the rest in the soft powder as their highlight. 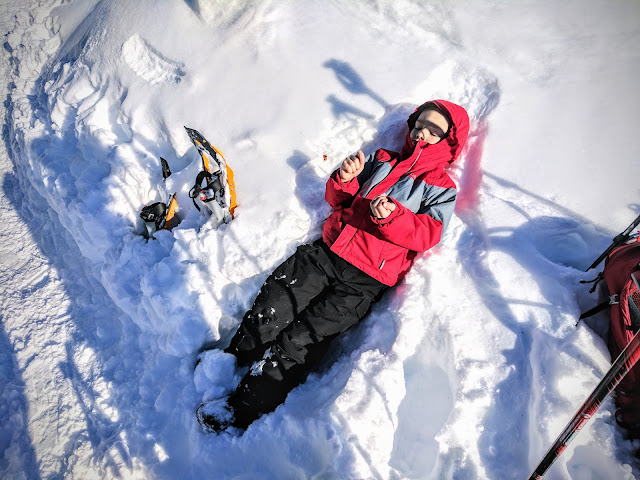 The untouched snow was the most powdery I had ever seen. With the bright sun, it glistened and begged to be disturbed. 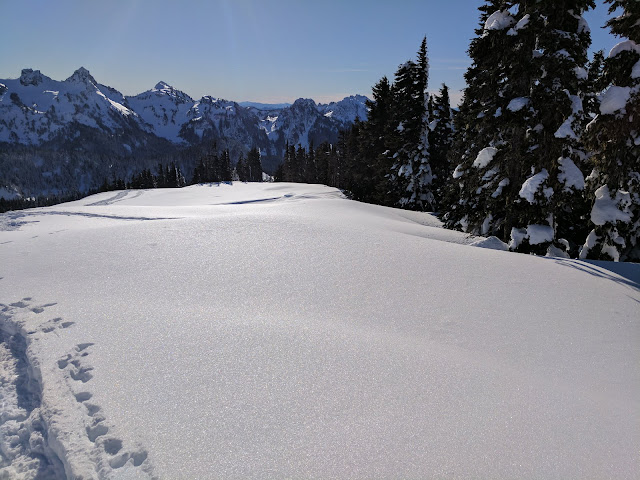 Adam decided to throw Landon in it like he would in Noni's pool. It's still amazing to think of how much snow there is up in these mountains just a short drive from the place we now call home. It truly feels like Narnia or at least another world from what I've known my whole life. 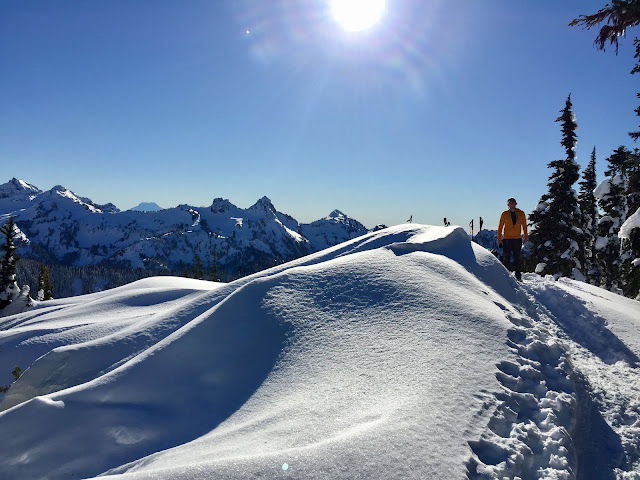 And while the mountains and snow are spectacular in their own right, it's the massive evergreens that make these winter scenes complete. 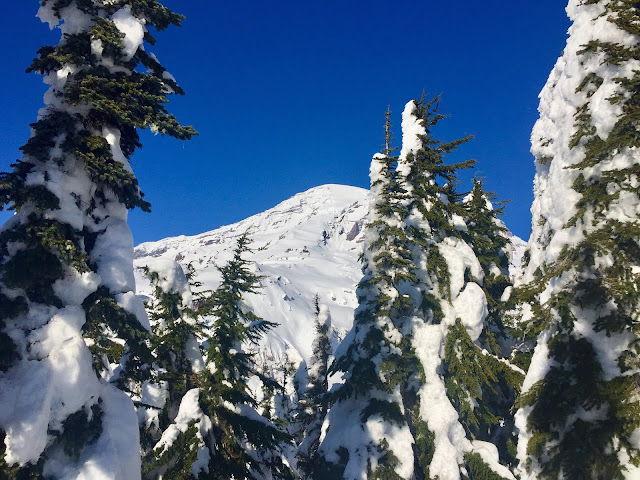 The dark green trees struggling to stand up against the massive piles of snow on their branches never cease to amaze us. 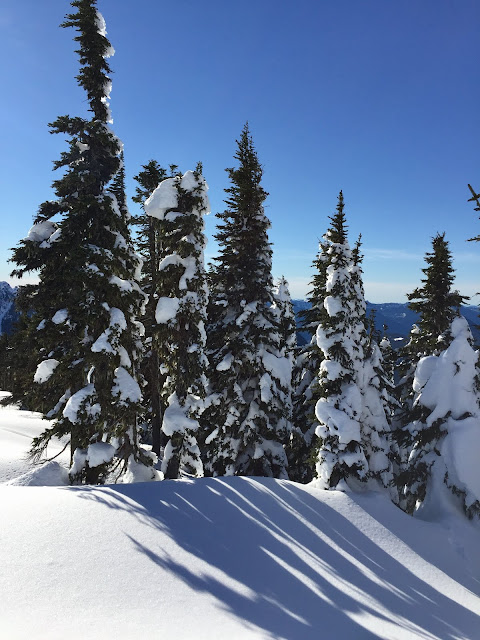 After our rest at the top, we made our way back down to the Paradise parking lot. Near the parking lot is a snow play area setup for sledding. Grandma just so happened to get Landon a sled for Christmas so we rewarded ourselves with some downhill fun for the afternoon. 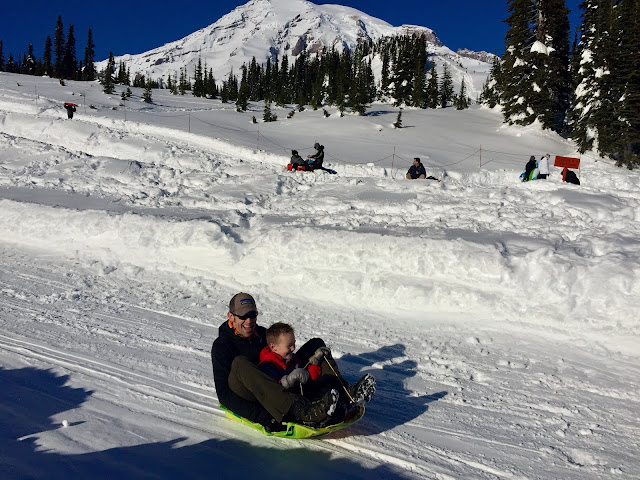 It was the perfect way to end our fun on the mountain that day. As we drove home that evening, we watched the sun set on Rainier. Somehow seeming more and more formidable as we drove further and further away, not to mention mystical and magical too. 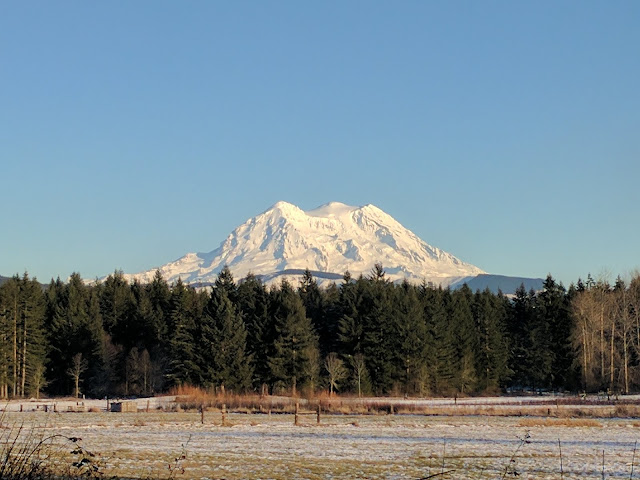