Artist Point-The Hike We've Been Waiting All Winter For

This year, I've had one particular winter hike on my to-do list; Snowshoeing up to Artist Point for a winter view of Mt. Baker and Mt. Shuksan. Catching a mountain in winter with clear blue skies is not necessarily "easy", so we waited and patiently checked (and re-checked) the weather each week until we finally saw a possibility of nice weather and decided to give it shot. With Spring drawing nearer every weekend, we figured it might be our last chance this year.

Landon had a boy scout event Saturday morning, but in the afternoon we headed North to Bellingham to camp overnight closer to our destination. We had previously driven through Bellingham, but this was our first time really getting to see just how beautiful this area is. We made our campsite in Larabee State Park, set up camp, and then headed down to the beach just in time for a beautiful sunset on the sound. 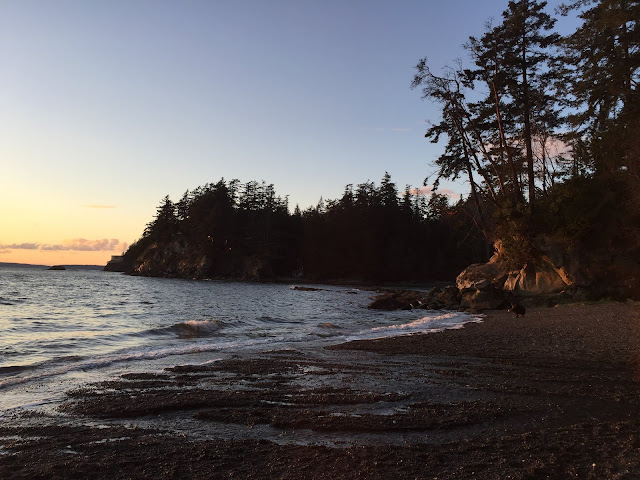 Our night in Larabee was short and really just a bonus to our trip's intention, but we managed to have lots of fun playing on the beach and hanging out at our campsite. Landon loved my new hammock (until he fell out of it) and we've managed to make card games a nightly camping tradition. 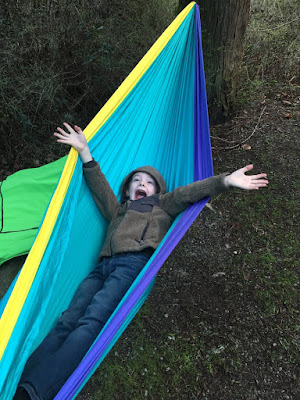 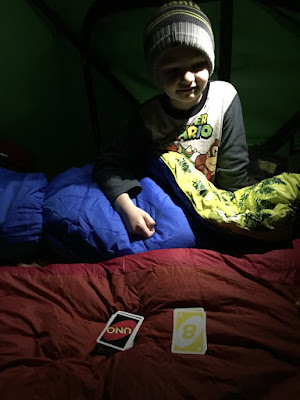 The next morning we woke up early to rain, made some breakfast as it cleared, and packed up with another 1.5 hours of driving to go. We arrived at the ski resort on Mt. Baker and we're greeted by some pretty cloudy skies. While Artist's Point is a very easy 1/2 mile loop from the parking lot in the summer, the road to the parking lot is not maintained in the winter. Instead, the paved road ends near Mirror Lake and it's about a 2 mile uphill hike to get to to the famous lookout. With spotty skies, we didn't think we'd make the hike up to the point, but both our boys were antsy to get out of the car and play in the snow so we decided to hike around a bit, play, and see what happened. It was almost immediately after gearing up and heading out into the backcountry that the clouds began to break and brilliant blue skies appeared. 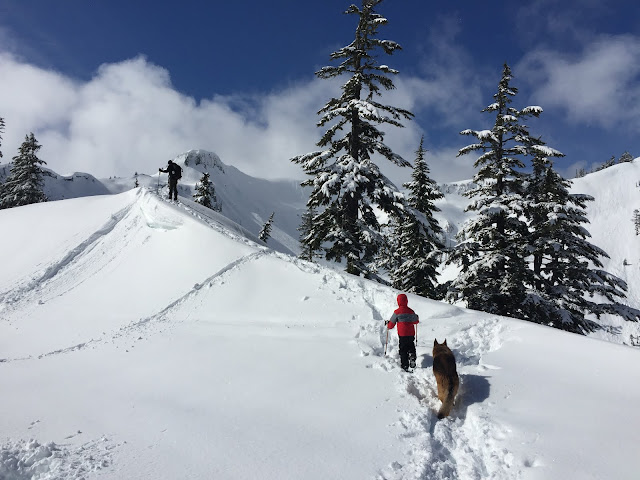 Through some previous oputings, we've learned that because of Landon's small weight, it's actually easier for him to hike without his snowshoes. In places where Adam and I would sink feet into the snow, he simply follow's Daddy's path and easily makes his way around with Kaiser right behind him. And just because he can walk without snowshoes doesn't mean it isn't deep. Look closely, there's an outhouse below. 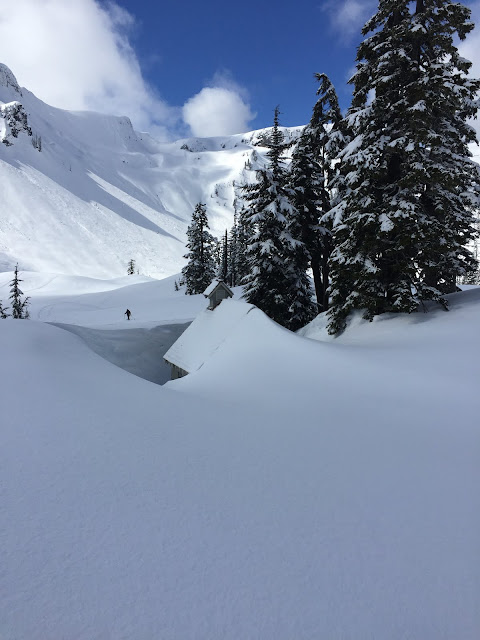 It wasn't long before we were in the most stunning scenery. With the skies open, the sun was literally making the snow glitter and we were all mesmerized by the beauty. Adam stopped to take some pictures while Landon and I ate cookies "to help with our energy". 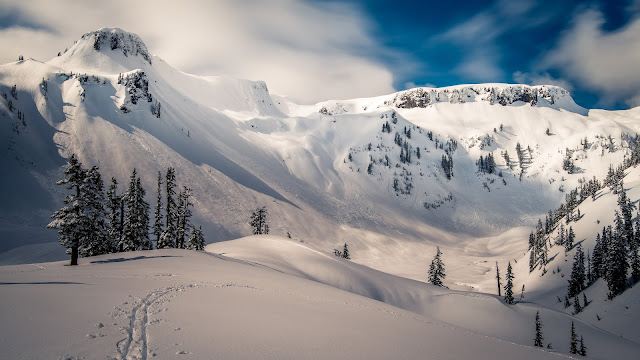 With the skies clearing up, there was no question we were going to the top. There were still plenty of clouds in the sky so we figured we'd never see the highest peaks, but it was silly to not at least try. We were all energized by the perfect weather and beautiful scenery. 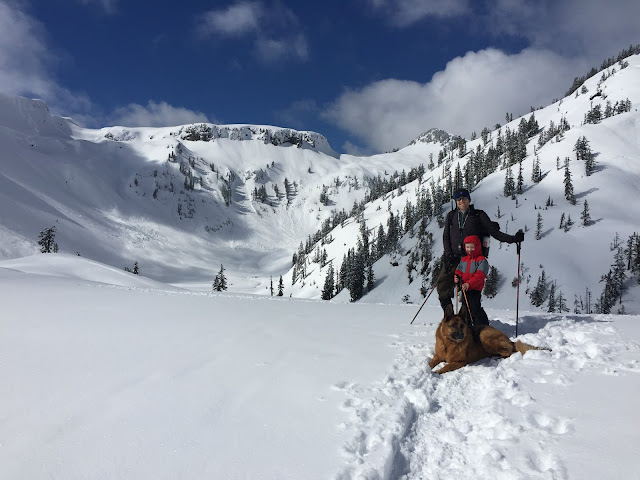 Up, up, and up; We went one step at a time. There were very few people out in the backcountry with us, but most of the people we did encounter were on skis doing what is called ski touring. With skins on their skis for grip, they were able to go faster uphill than us and we heard their screams of delight as they zoomed down the mountain at lightning speeds. We are not great downhill skiers, but it gave us some new goals. The area we covered in two miles was a serious uphill climb. 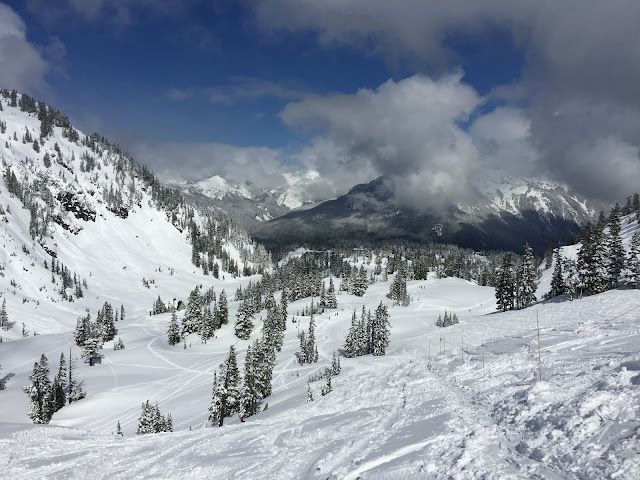 Our parking lot is way, way down in the valley below. Along the way, we passed some winter campers. Winter camping is something we really want to try, but have been hesitant to do with Landon's young age. Seeing these tents in the midst of these beautiful mountains really solidified that we've got to take a shot at it next year. A sunrise from this spot would be incredible. 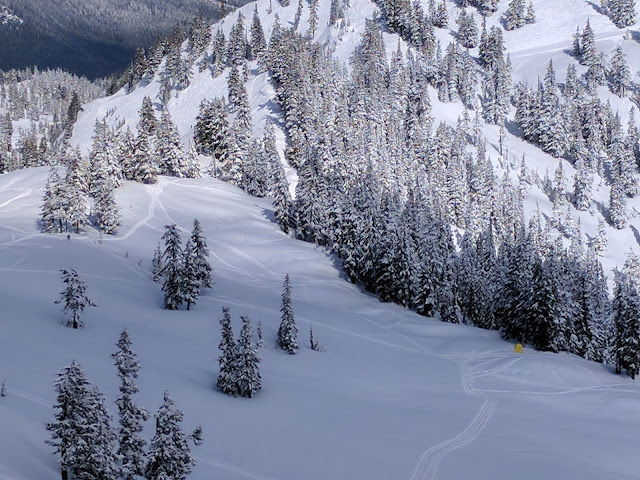 It wasn't without a little sweat, but we eventually reached our destination! Joy was had by all. Although it wasn't a long hike, it was literally all uphill and in deep snow. For the first time ever, Landon didn't complain AT ALL and was actually the first one to the top. It was a pretty happy moment! 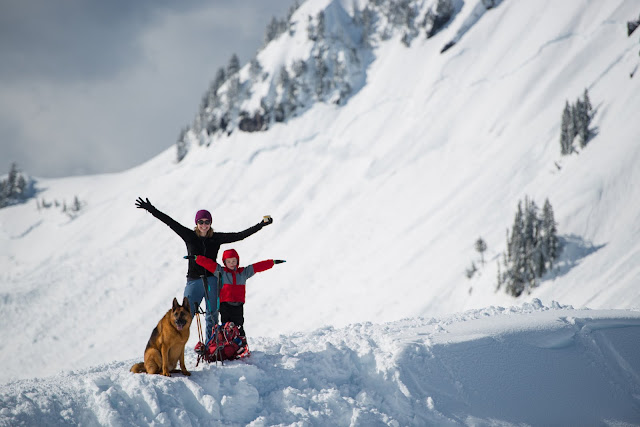 Landon received the remaining sleeve of girl scout cookies as his reward while we all ate some lunch. Even Kaiser got a treat, some homemade snowballs to munch on. He loves snow! 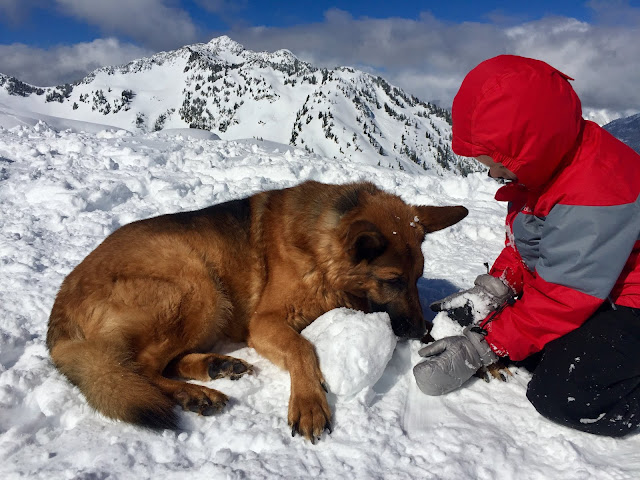 Of course, once we got to the top there was an infinite number of places to go to and explore (just another reason to try ski touring), but we settled down on a ridgeline between Mt. Shuksan and Mt. Baker and were content simply turning our heads from left to right. 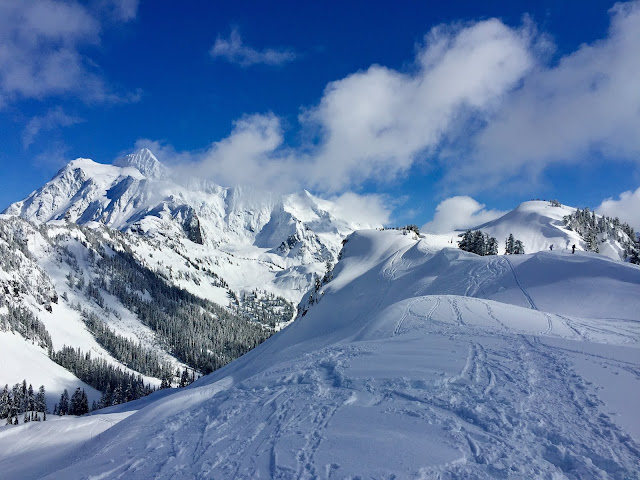 As we suspected when we first arrived, both mountains were hiding behind a few lingering low-lying clouds. We figured if we waited long enough, they would peek out but regardless, the rest of the views were amazing. From atop, we could see all the way down to Baker Lake, a place we had visited on our visit trip to Washington almost a year ago. 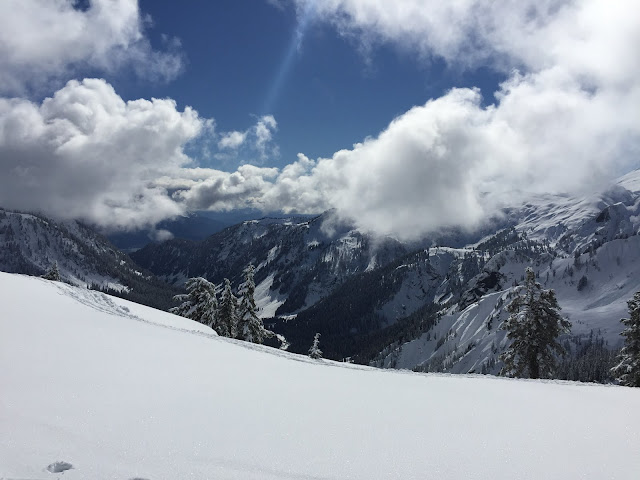 As we waited patiently, the clouds eventually passed and Adam began to take pictures of the spectacular scene surrounding us. It wasn't long before Baker appeared. 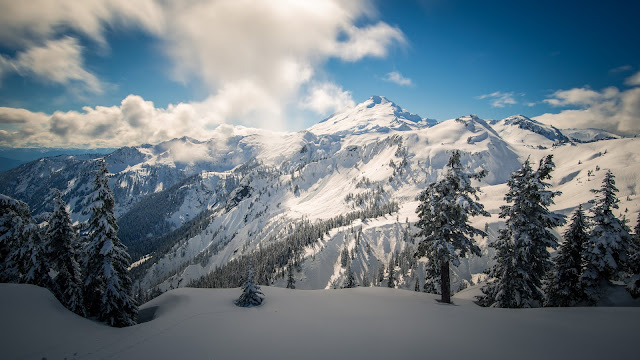 Shortly after, Mt. Shuskan peeped out too which is really the prettiest of the two neighbors. 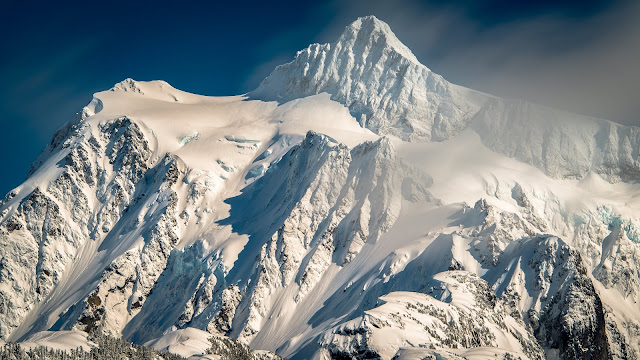 Standing on the ridge, with each mountain on either side, it's amazing how small we humans become. 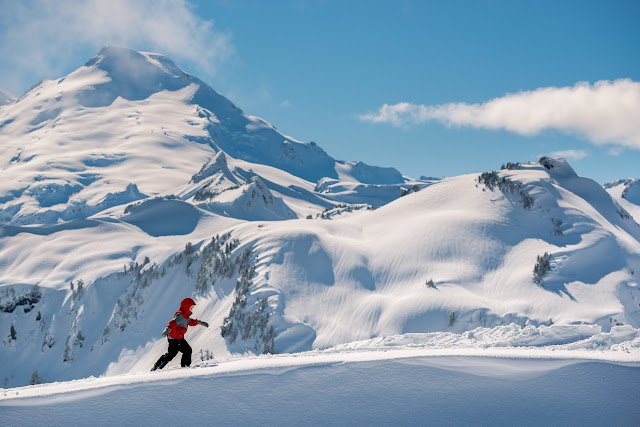 During our break, Kaiser appeared to be going to sleep. We were not sure if the hike up wore out the old man or worse, he was going snowblind. Just in case, he borrowed Dad's sunglasses for a bit. We might need to invest in some doggie goggles for next year. 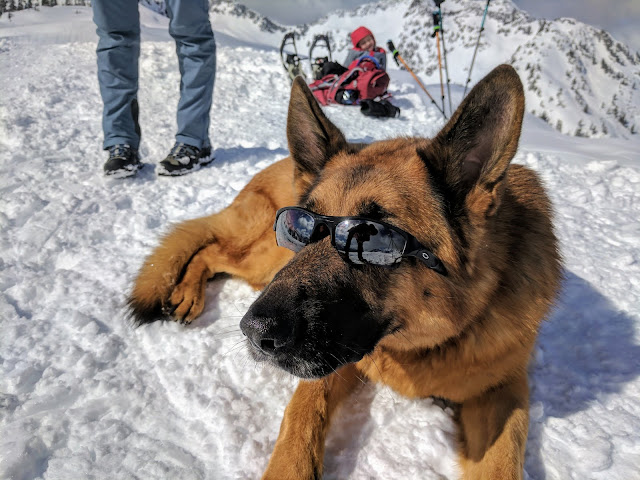 And of course, we had to take a family picture to remember this gorgeous day by. 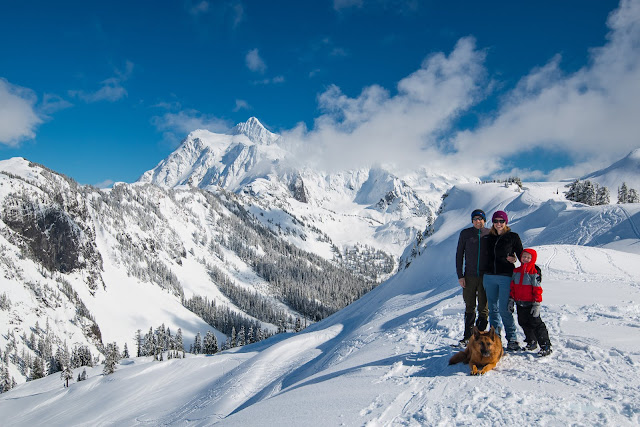 Then we started back down the same way we came up, up, up. 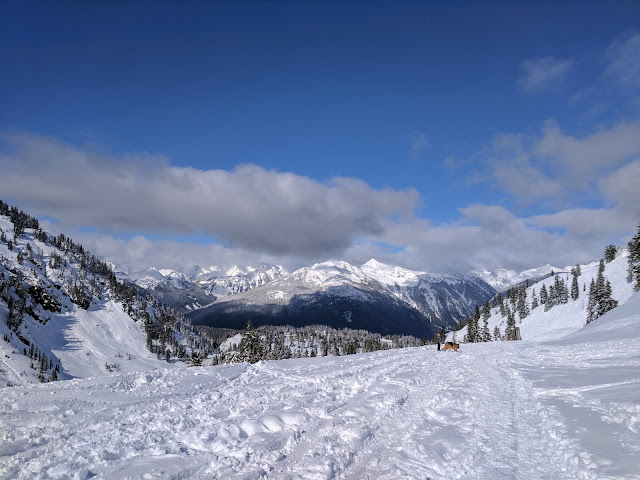 By this late in the afternoon, it was almost hot. The sun was shining and the visibility was wonderful. Going down we were constantly in awe of the mountains that were laid out before us in every direction. 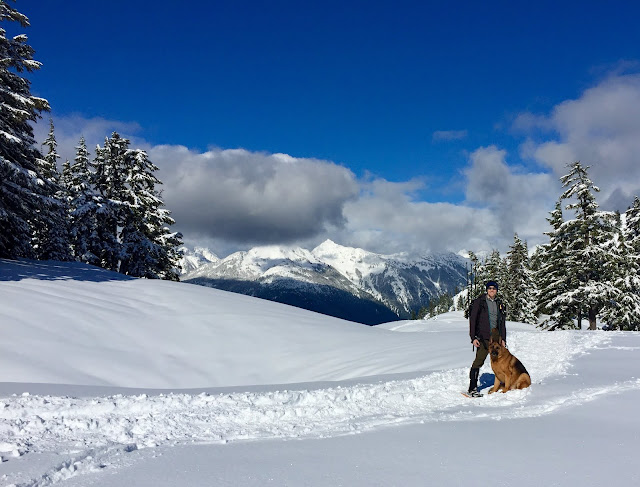 It was almost a miracle that we made it all the way up AND down without a single complaint. It might have been a breakthrough hike because even near the bottom the whole family was still all smiles. 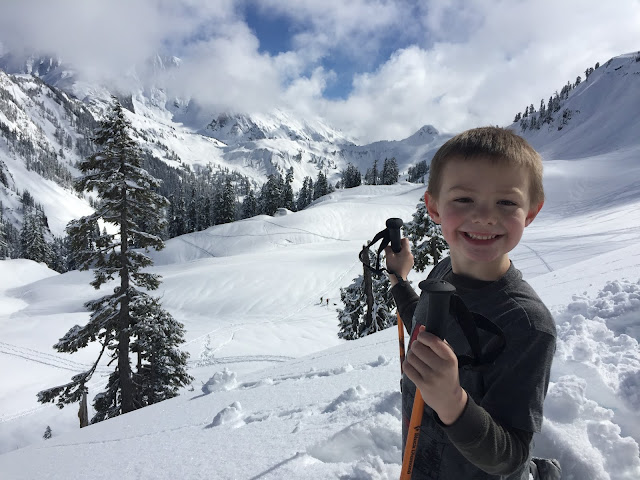 And although we had a glorious day, the next morning we all woke up with a sunburn. It was a HUGE mistake on our part not to be proactive and put on sunscreen on when we left the car. I knew Sunday night when we got home that Landon's face was red, but the next morning it was completely swollen. He was a good sport about it, but when the school called worried he was having an allergic reaction, I definitely felt like the worst Mom in the world. Lesson learned and we've already purchased a small sunscreen bottle that we put in our first aid pack in my hiking bag.

Never again will let the snow turn us into marshmallow faces, but I sure hope we get another opportunity to visit Artist's Point in the winter. It's probably my favorite place in Washington and completely worth the wait. 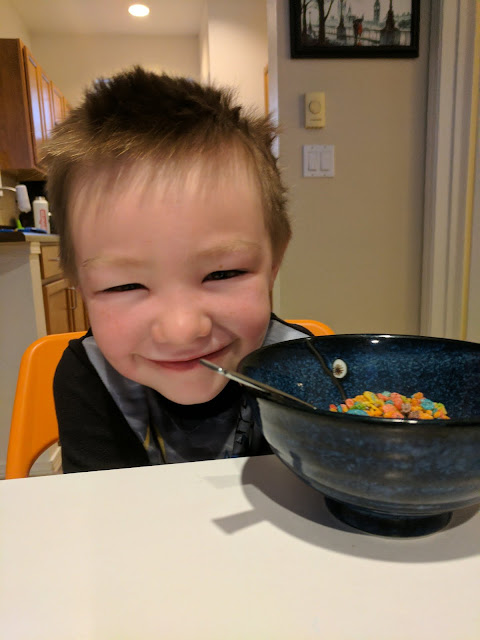